thirteen in the desert...

Though we always hear that what happens in Vegas stays in Vegas...I'm about to spill the beans.  We had such a good time there this past week...thirteen women from my family...and I am quite willing to share a bit of it with you! 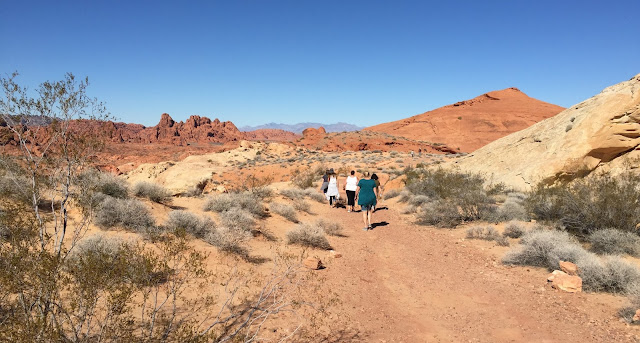 It was last fall that my niece Gillian came up with the idea of having a 'girls only' reunion in Las Vegas...bringing together seven cousins and their six aunts from all parts of the country (two countries, actually).  She did all the organizing...in advance and while we were there....and it all unfolded as it should! 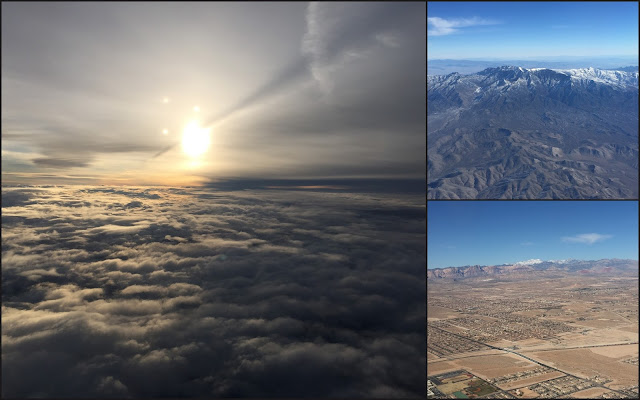 We flew in from British Columbia, Alberta, Manitoba, Iowa and Texas...and we all had flights of about the same length of time. We knew we would be in for quite a ride...when we all found ourselves on the roller coaster that first night.  How did that happen? Those nieces of mine can be quite persuasive! If I ever go on one again...remind me to remove my glasses first.  Just saying! 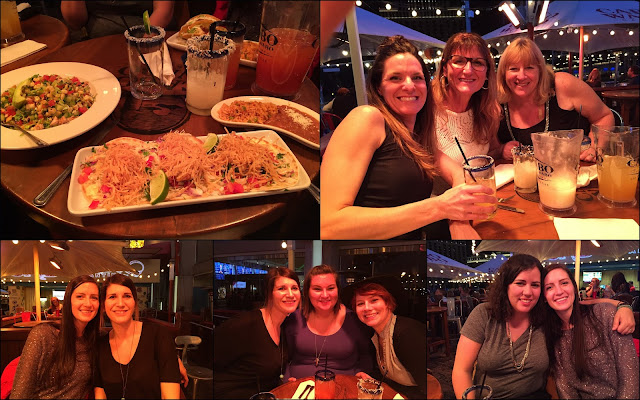 One of our first stops when we arrived was the grocery store where we picked up breakfast foods and snacks...so we wouldn't be spending all our time in restaurants. We just had a few special meals together as a group...including Mexican food one night. 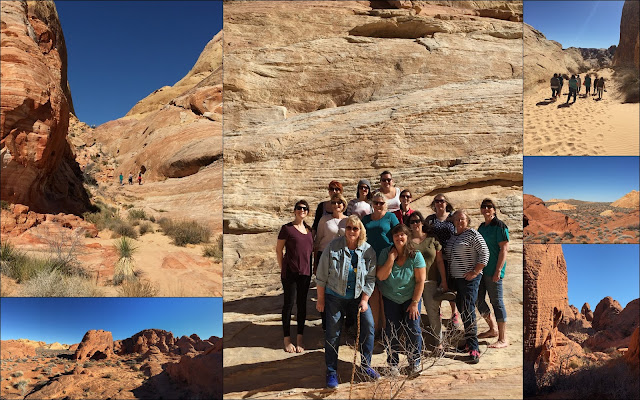 The following morning all thirteen of us piled into rental cars and headed for Valley of Fire State Park, which is less than an hour north of Las Vegas.  The plan was to follow-the-leader and arrive there at the same time.  We should have known that with a population of more than 2 million people...the traffic through the city would be crazy.  And it was!  We soon all parted ways...and arrived at the park at different times and different places.  With no cell phone service...it took over an hour to 'find' each other once we arrived.  It's a great place to visit! 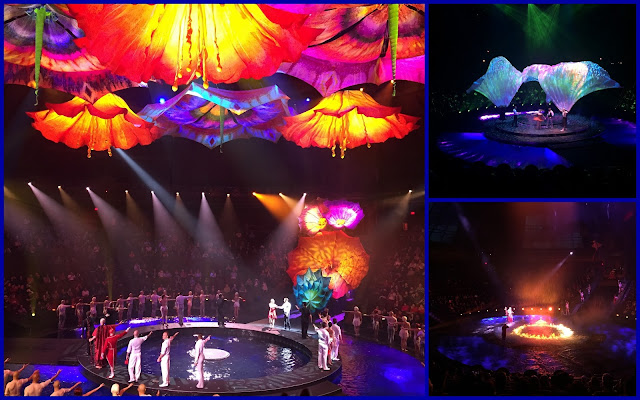 Some of us went to see Le Reve ~ The Dream at the Wynn Hotel one night.  Though I must say I'm not always the best at figuring out the story line...it was an amazing show from beginning to end...featuring stunning performers who danced through water and fire in a round theatre with a pool and stage in the middle. 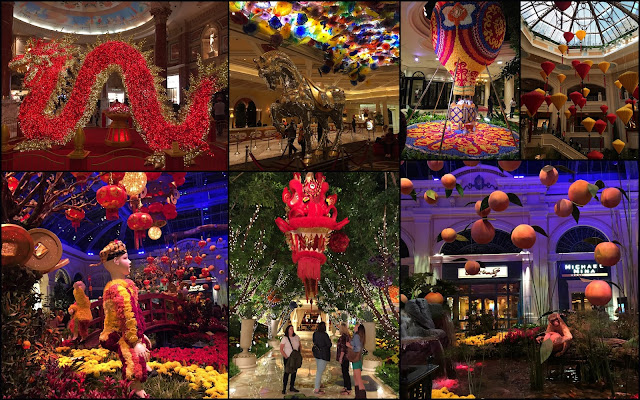 Later we wandered through some of the incredible hotels...all decked out in live flowers for Chinese New Year...which happened to be during our stay. 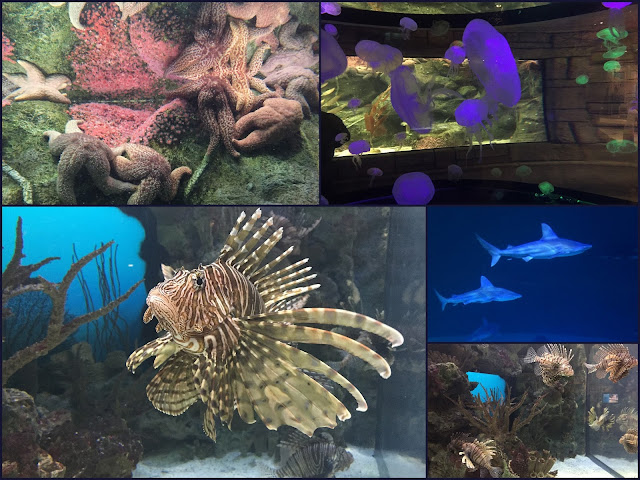 The Mandalay Bay Resort features an aquarium called the Shark's Reef...which was worth the visit. While some of us toured hotels and aquariums that day...the rest spent an afternoon around the pools...playing games or floating down the lazy river. 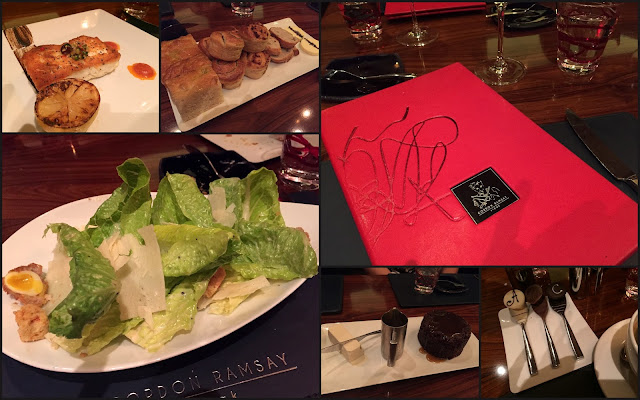 It was the last night we would all be there...and so we had made plans to visit Gordon Ramsey's Steakhouse for dinner that night.  It was not until sometime that day...that we realized it was February 9th...which was my mom's birthday.  Though she passed away many years ago...it would have been her 90th birthday that day. 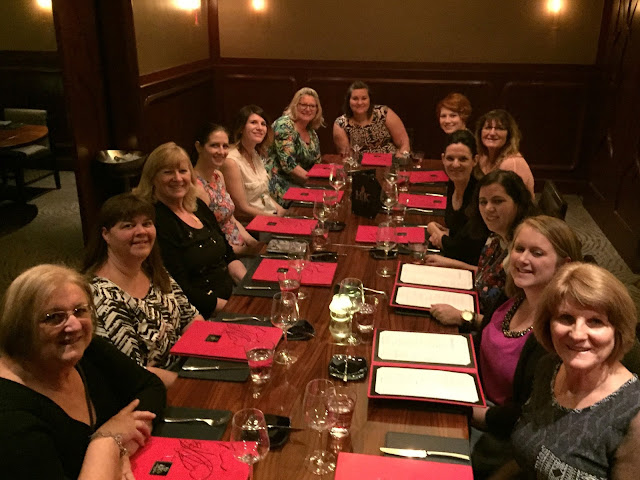 And so we...her five daughter's, one daughter-in-law, and seven granddaughters from here, there and everywhere...met for dinner on her 90th birthday.  I'm sure she would not have chosen to have her birthday dinner in Las Vegas or at the Gordon Ramsey restaurant...but she would have been thrilled to have us all around the table! 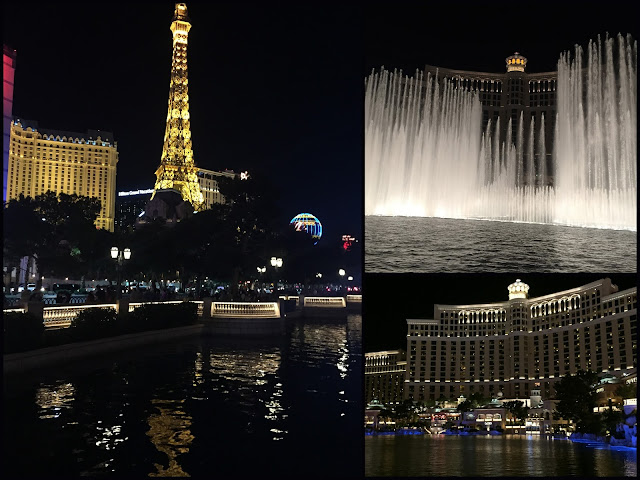 The Gordon Ramsey restaurant is in the Paris Hotel...across the street from the Bellagio which is an Italian-inspired tower behind a large lake featuring fountains set to music.  Quite lovely, actually.

Those are just a few of the highlights of our 'reunion in the desert'. But what mattered most about our time together was not what we saw or what we ate...but that we got to know each other in a new way.  I know that I have a great bunch of nieces...and sisters too, for that matter!

I'll just add a quick postscript about what was happening back home while Heidi (my daughter) and I were a way.  Hubby had volunteered to watch Maggie and Lucy for several days while their dad was at work...and mommy was away.  And so he took Lucy to ballet...and got a little more than he had bargained on.  It happened to be costume fitting day...and all the moms helped the girls into their costumes.  All the moms...and one grandpa!  Then Lucy announced that she needed Valentine cards for her pre-school party...and so grandpa took her shopping for valentines. Oh...we laughed quite hard when we heard these stories!  But it seems a good time was had by all.

And so ends my mid-month post...a re-cap of a reunion in the desert.  Where the sun always shines and one does not need an umbrella.

Have a wonderful weekend!