Our Holy Land Highlights Tour ~ a few tales from the trail

Our time in the Israel was an amazing experience and I know that words could never describe what we saw and felt.  Nor will my photos do justice!  Since I have no idea where to begin...I thought I would just share a bit of this and that today and then do a few posts in a more systematic way later.

First of all...let me just say that we never felt unsafe at any time!  If for any reason there were security alerts in an area...our tour guide would not take us there.We did not visit the city of Jericho or stop at the lookout on the Mt. of Olives for that reason.  With the heavy security at the airport and along all the borders...I'm thinking that Israel might just be one of the safest places to visit! 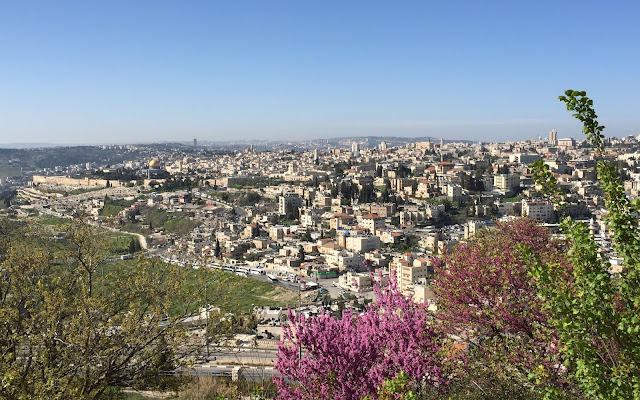 We began our visit to Israel with a few days of touring in and around Jerusalem.  This photo was taken from a viewpoint on Mt. Scopus...east of the city and right next to the Mt. of Olives.  I'll give you a tour of this historic old city one day soon.

Let me go back and tell you how this trip came about.  It was not like we were planning on going to Israel anytime soon...it was not really even on our bucket list.  But one day a few months ago I found myself in waiting room of the hair salon...and opened an e-mail from Travel Zoo just to pass the time.  Their feature that day was a a Holy Land Highlights tour leaving from Toronto...at a very good price. I went home and shared it with my hubby...who said, 'Let's go'.  We contacted our good friends who have traveled with us many times in the past to see if they would be interested in joining us...and within a few days we had all booked a trip to the Holy Land over Easter. 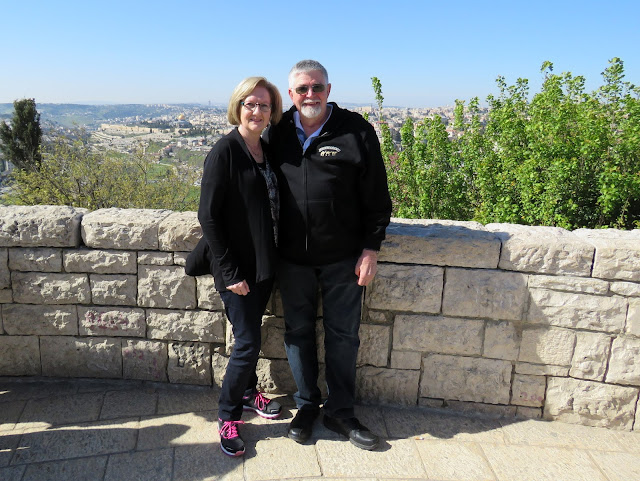 We have traveled with Dave and Janet many times over the past four decades!  Our first trip together was a missions trip to Guadeloupe, Dominican Republic and Haiti when we were newly married.  Since then we have been to Florida, California, Hawaii, England, France, Kenya and China together. We have many wonderful shared memories from over the years!  We so enjoyed our time together with them in Israel...good laughs and good discussions! 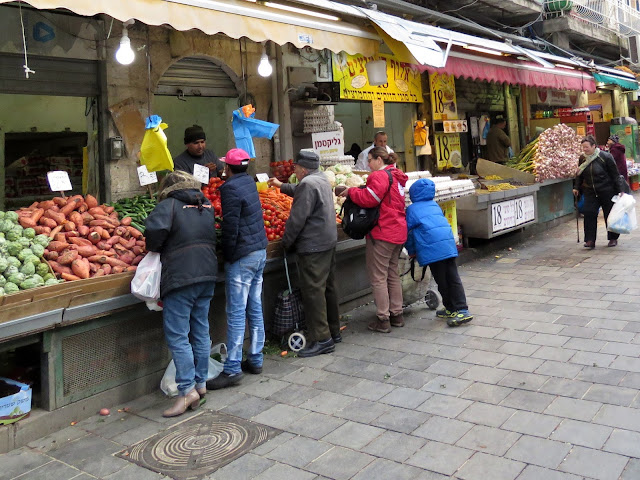 The night we arrived in Jerusalem we headed straight for the Mahane Yehuda Market...just blocks from our hotel. It is Israel's most sprawling market place with more than 250 vendors (wares, produce and restaurants)....and attracts both tourists and locals. 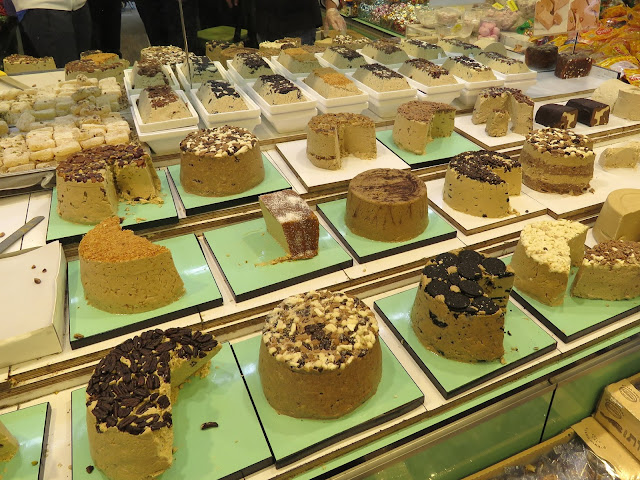 I had to take a photo of this particular 'shop'...featuring halvah in every size, shape, form and flavour!  We sampled several varieties...all were most yummy!  Halvah takes me back to the Christmas of my childhood...where it was always a staple with the Christmas goodies at our home.  It was purchased in a 9 x 12 tin...and  was always vanilla flavoured.  In Israel it is a confection year-round...found on our buffet tables at breakfast, lunch and dinner. 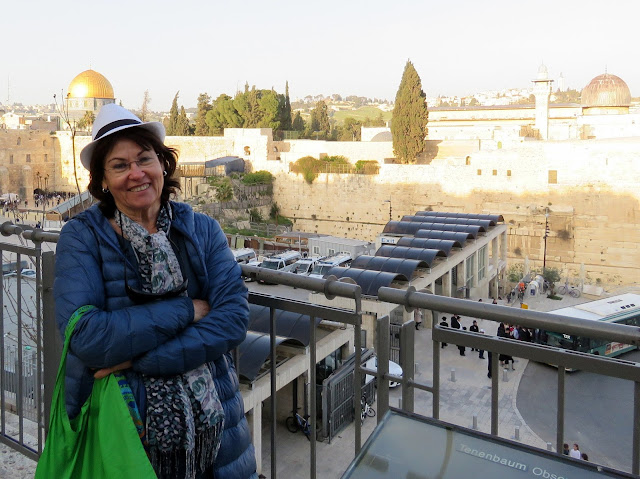 After a good night's sleep (LOL)...we met up with the rest of our tour group and our wonderful guide, Orna.  Orna is Israeli (a secular Jew) who grew up in TelAviv, spent some time in Canada as a young adult and had a wealth of information to share with us.  The rest of our group was made up fellow Canadians from Calgary, Winnipeg and Toronto...as well as some Americans, a couple from Iceland, one from the Netherlands, and some from China.  They were a great bunch to travel with! 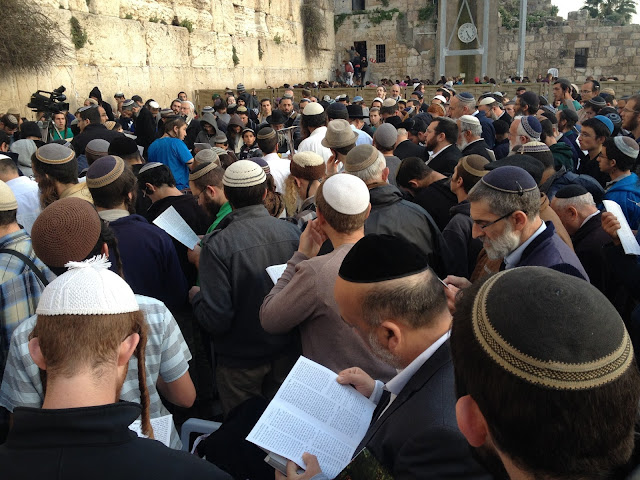 Of course we visited  the 'Wailing Wall' in the Old City...where Jews gather three times daily to pray and tourists come to observe.  To enter the square we were required to pass through a security check...and modest dress was required (as at all holy sites).  Some 15,000 people gather here daily!  I should mention that off to one side is a smaller courtyard for the women. Since Jewish law does not require the women to pray...it is mostly men who gather here. 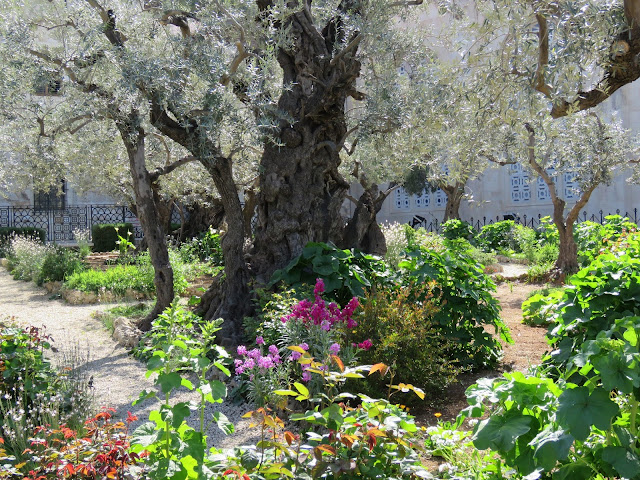 One of my favorite places to visit was the Garden of Gethsemane with its ancient olive trees...most meaningful to be there at Easter! 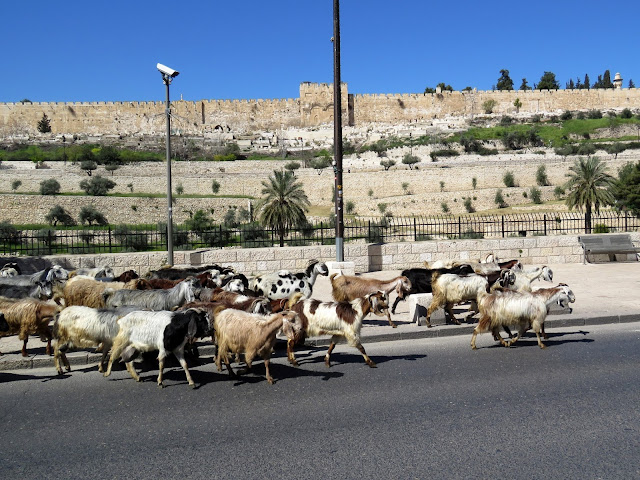 I pulled out my camera quickly when I saw a herd of goats being driven down a main road by a young goatherd.  He saw my camera...forgot about his goats...and came to see if my photo was worth a few shekels to me! 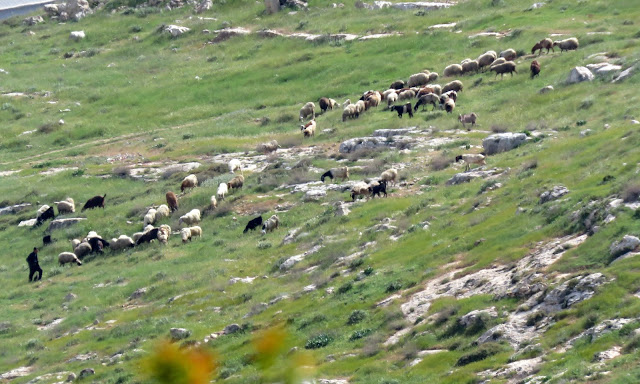 I don't have many good photos of the Israeli countryside that we sailed through on a tour bus...since the driver was not nearly as interested in stopping for photo-ops as my driver back home is. :)   But I had to capture the image of a shepherd watching his sheep on the hills 'near Bethlehem of Judea'.  It seemed fitting! 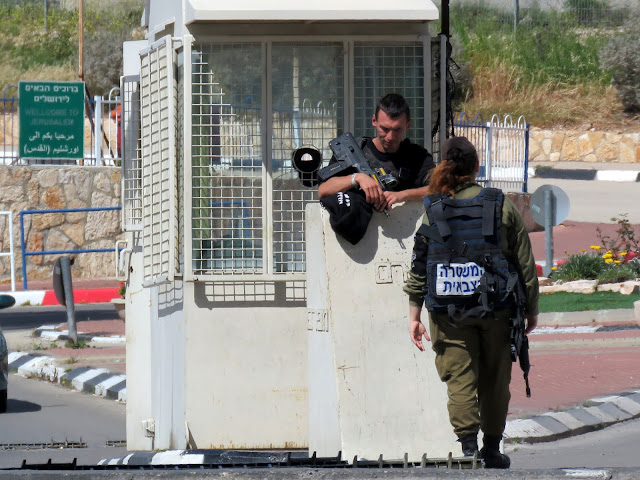 I didn't realize that Bethlehem was under Palestinian control...and that to go there one needed to go through major security checkpoints.  Since our tour guide was Israeli she was not able to accompany us to Bethlehem...so she got off before the check-point and would re-join our tour later. A Palestinian Christian tour guide hopped on board once we were through the check-point and took us on a tour of Bethlehem. 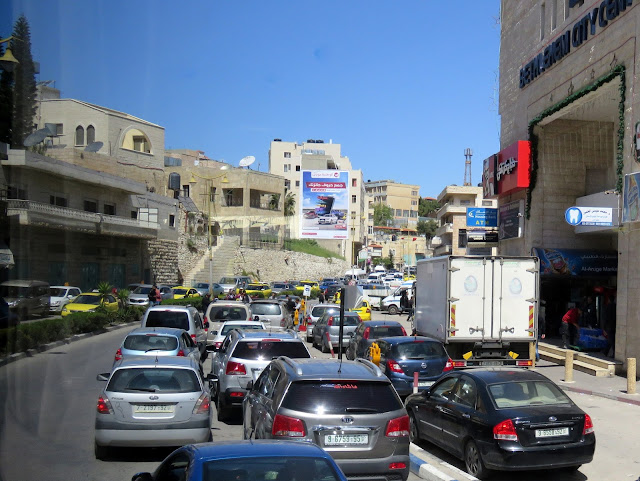 Somehow I was expecting a wee village on a hillside...and not an old city with congested streets and traffic issues! 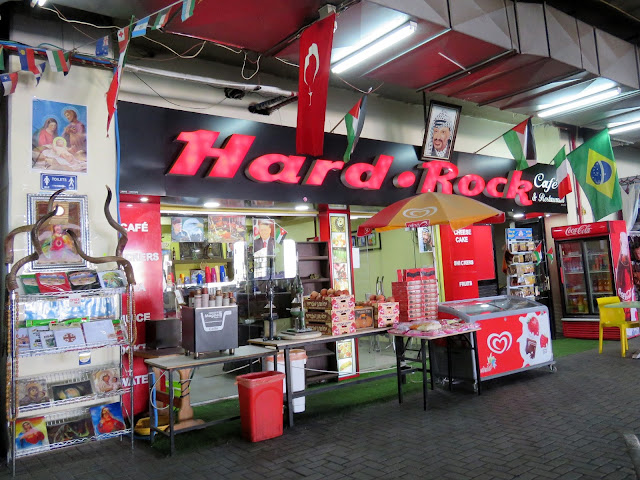 I definitely wasn't expecting Hard Rock Cafe...and had a hard time with rationalizing photos of Yassar Arafat on the same wall as the nativity scene!  We toured the church that is built on the likely site of the nativity...and then visited a gift store operated by the Christians of the area who are finding it hard to earn a living as a result of the political situation these days.  Once an overwhelming majority here...Christians have dwindled to about a third of the population of Bethlehem...and young people continue to leave.  Our heart went out to them!

We traveled through an area north of the Sea of Galilee and passed through  the Golan Heights.  We were right near the Syrian border and could see the former Syrian military headquarters...now sitting on Israeli soil. Our bus driver offered to take the bus up the bumpy drive for a closer look... 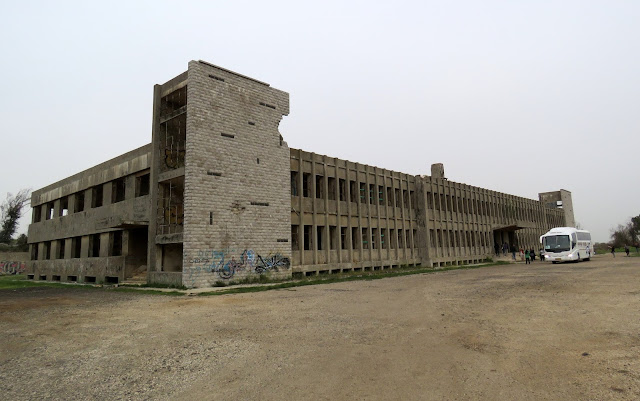 ...and we soon found ourselves in front of this abandoned bombed-out wreck of a concrete building.  It stands as a reminder that Syria occupied this territory prior to the six-day war of 1967. 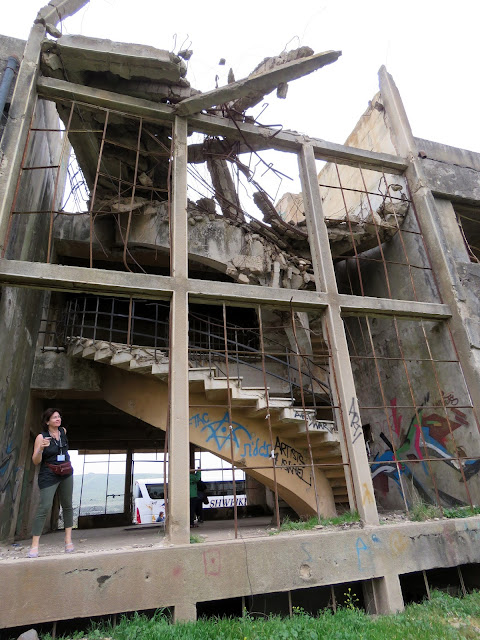 Our tour guide asked me to take a photo of her under the crumbling staircase.  She had only been this 'up close and personal' once before and not with a tour bus! It was all rather surreal!

While in the Galilee region we spent two nights at a Kibbutz hotel...where we learned a lot about what Kosher meant in a big hurry!  (Do not bring coffee with milk into the dining room on Shabbat...milk and meat are never served at the same time.)  Now we know! 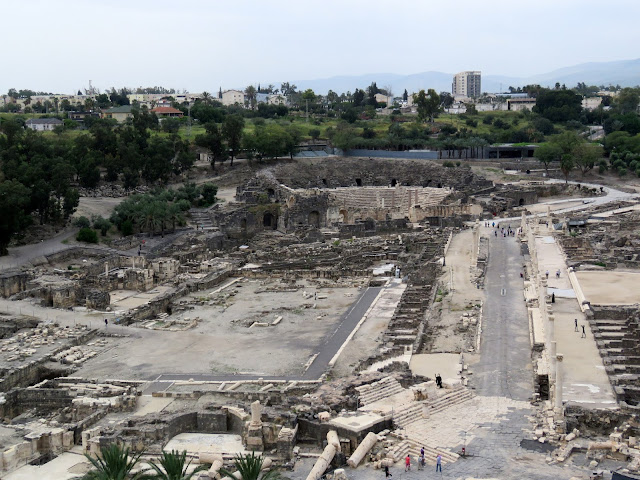 We visited Beit Shean in northern Israel...'the oldest city in the world'.  It lies at the junction of the Jordan River Valley and the Jezreel Valley ans is home to a protected historic site where we walked through excavations of a beautifully preserved 2000 year old Roman City. 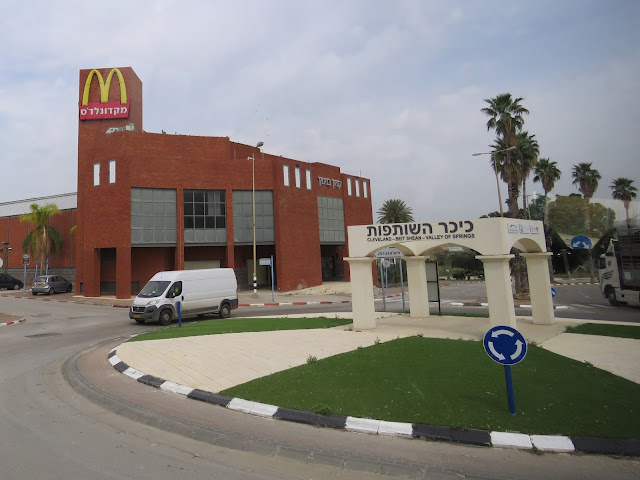 Why does it seem like there is something wrong with this picture...having a McDonald's drive-through restaurant right at the entrance to the archaeological site with its ancient Roman baths? 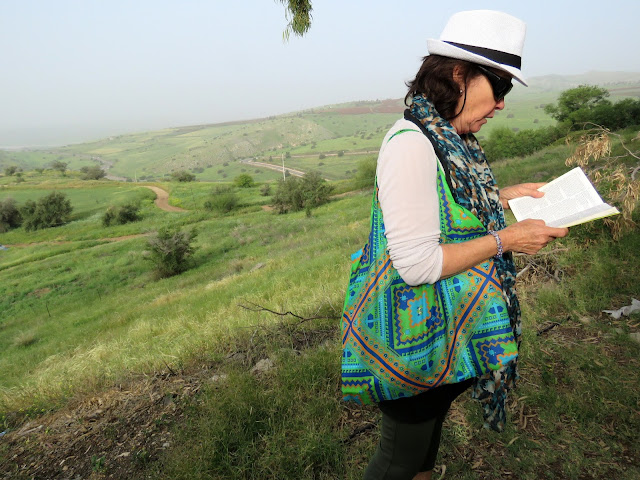 On the slopes above the northwestern shores of the Sea of Galilee our tour guide read the 'beatitudes' to us from Matthew 5.  It was (and is) such a quiet, peaceful setting...this hill where Jesus preached the Sermon on the Mount. 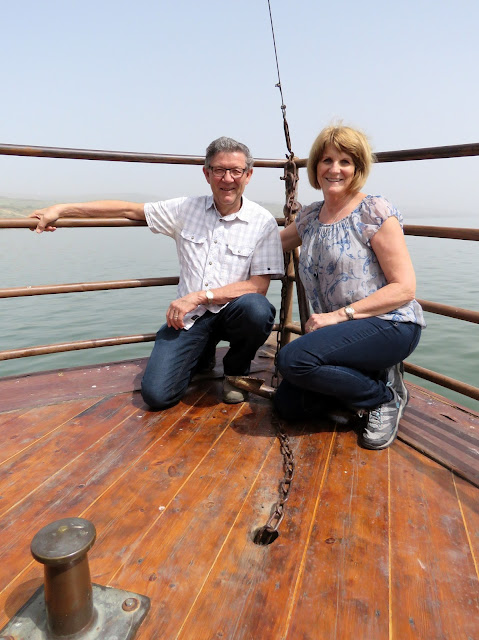 One of my personal highlights was the boat ride on the Sea of Galilee.  It was where Jesus and his disciples spent so much time...and not somewhere I ever expected to find myself! 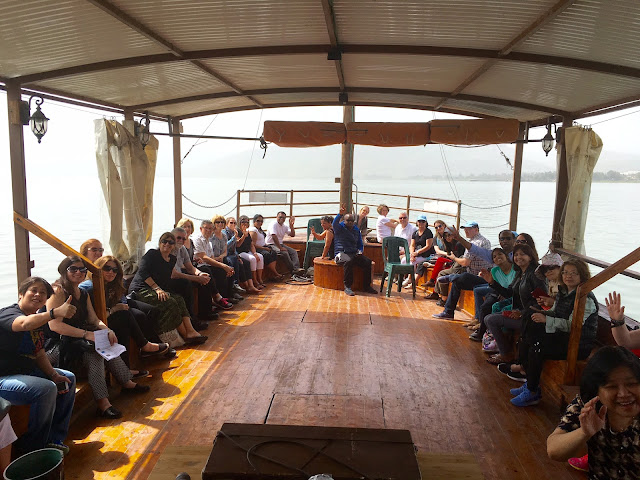 And here is the group we traveled with while over there...together in a boat on the Sea of Galilee...strangers who became friends. 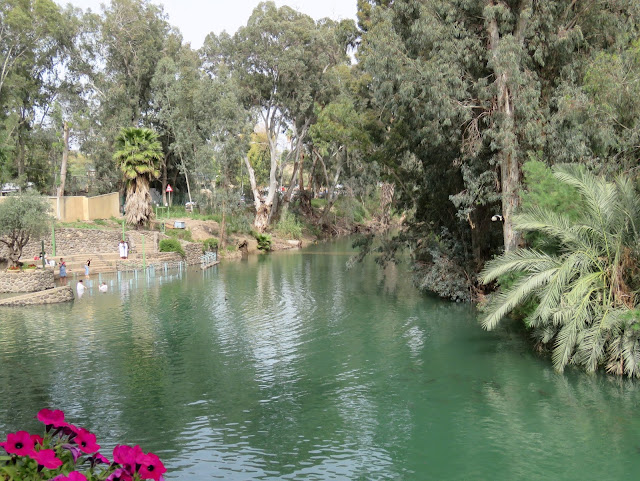 Another highlight was our stop at the Jordan River where seven people from our group were baptized.  Our tour guide had made arrangements to have a pastor meet our group there to perform the baptism. It was a beautiful ceremony...baptism by immersion right where Jesus was baptized. When the baptismal service was over...we sang 'Praise God from Whom All Blessings Flow'. The memories will live on! 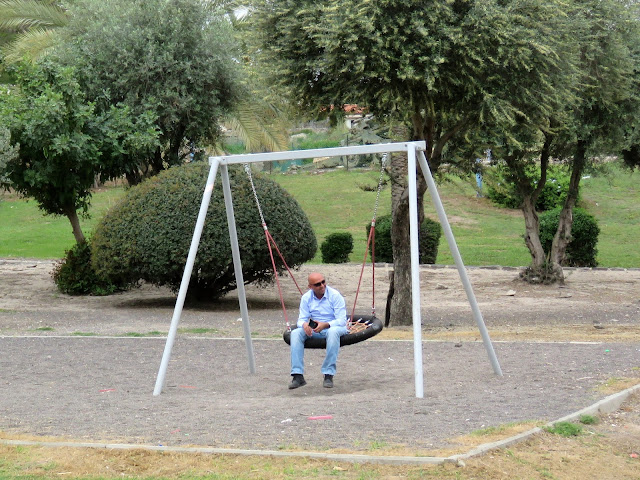 Our most capable bus driver...'hanging out' when he wasn't driving! 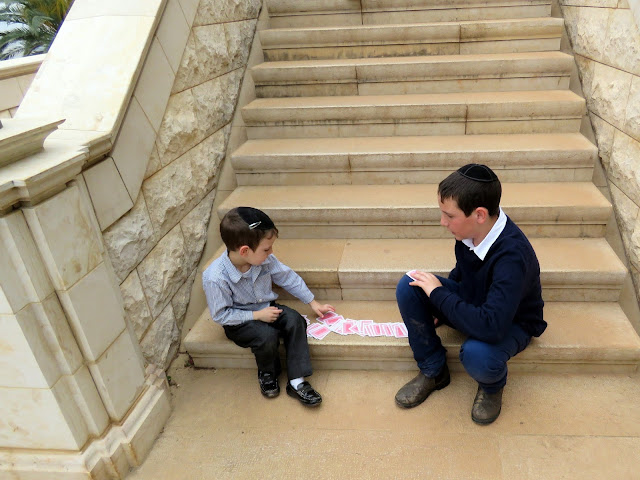 Kids will be kids...world over!  These two had settled down to a good game of cards on the stairs providing public access at a lovely park.  They were so engrossed in their game...they were oblivious to all who came and went! 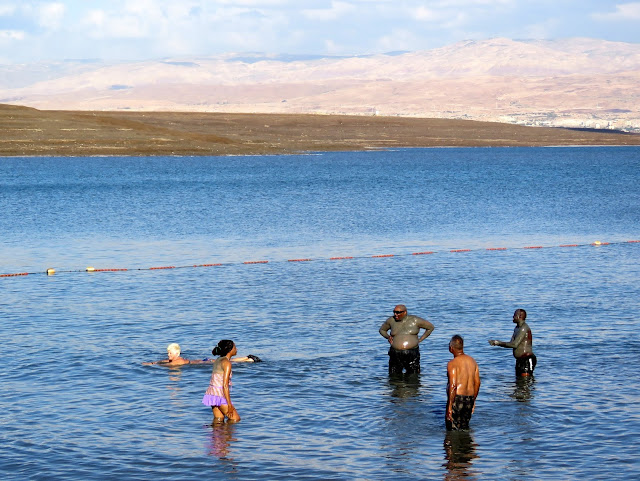 We stopped at the Dead Sea...where we chose to watch others frolic or float in the water...or cover themselves in the Dead Sea mud.   (We were flying back to Canada later that night and really didn't want to bring any unwanted mud home with us!) It is over 1400 feet below sea level and 10 times as salty as sea water...making it impossible to sustain life of any kind.  In the Bible...it was a place of refuge for King David.  It was also the site of one of the world's first health resorts (for Herod the Great).  Products of the Dead Sea are sold around the world...including fertilizers and beauty products. 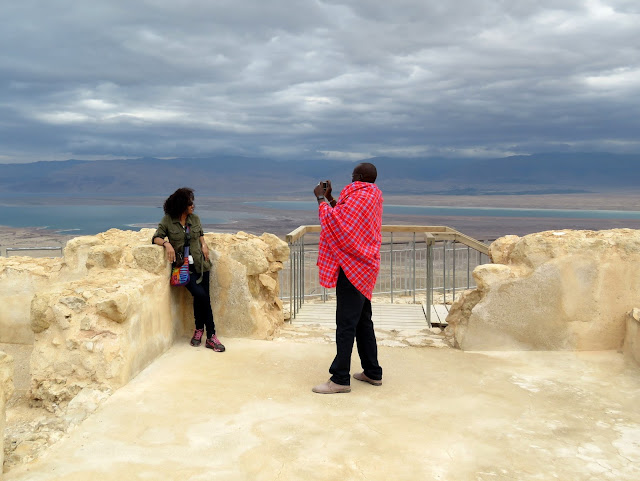 High above the Dead Sea is the Masada fortress!  The Kenyan who joined us up there looked quite striking in his Masai wrap. 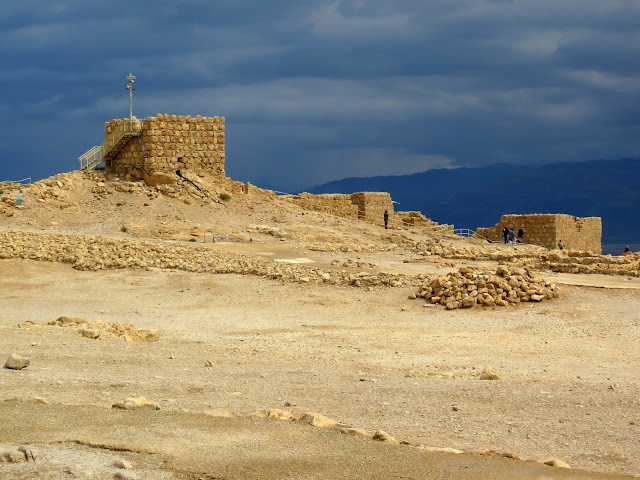 Masada...we went by cable-car to the mountain top fortress where the Zealots made their last stand against the Romans in 73 AD.  It became Herod's mountaintop palace at the end of the first century...and many remnants of that are still visible today.  It is also a United Nations World Heritage Site...for good reason! 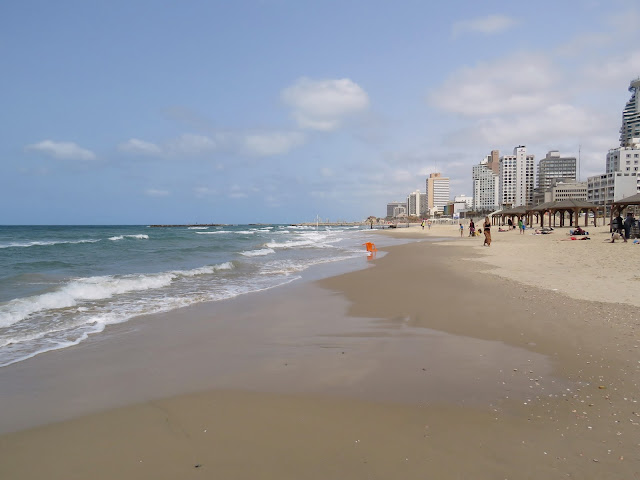 I'll leave you with one last image...where the Mediterranean Sea meets the city of TelAviv.  It's where we began an ended our Israeli adventure!

There are many more stories waiting to be told...but this post is quite long enough already.   Let me just conclude with this...to be in the Holy Land over Easter and walk the same paths that Jesus walked was an amazing and inspiring experience!

Email ThisBlogThis!Share to TwitterShare to FacebookShare to Pinterest
Labels: israel