It's been a few weeks since we were there...so it is high time I documented the rest of our journey in northern BC.  The east-west corridor of the region is Highway 16...also known as the Yellowhead Highway. 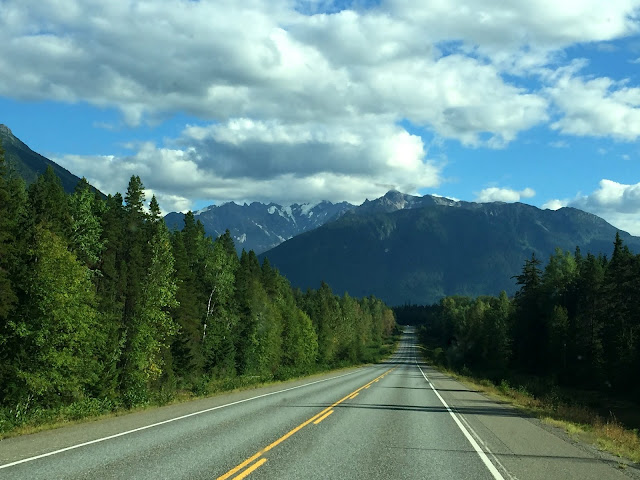 You can join me on this route today...passing through friendly communities and incredible scenery.  We connect up with the Yellowhead Highway at Prince George (B.C.'s northern capital) and travel westward. 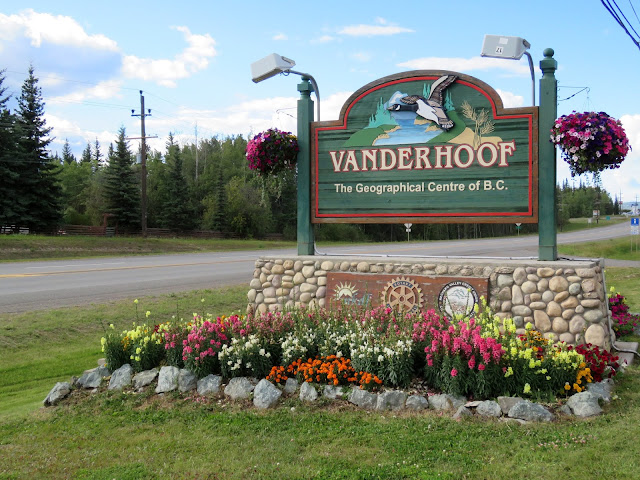 After about an hour's drive we arrive in the forestry and farming community of Vanderhoof...the geographical centre of our province. 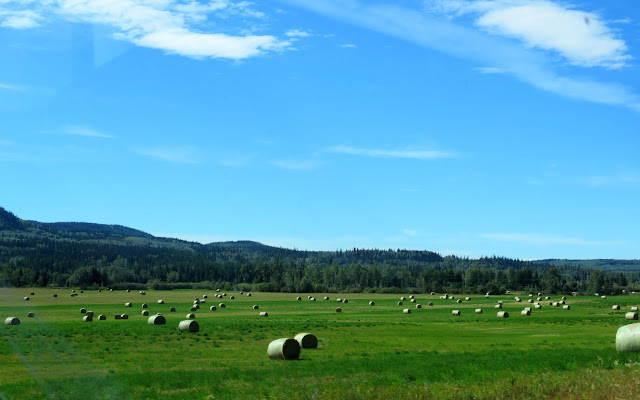 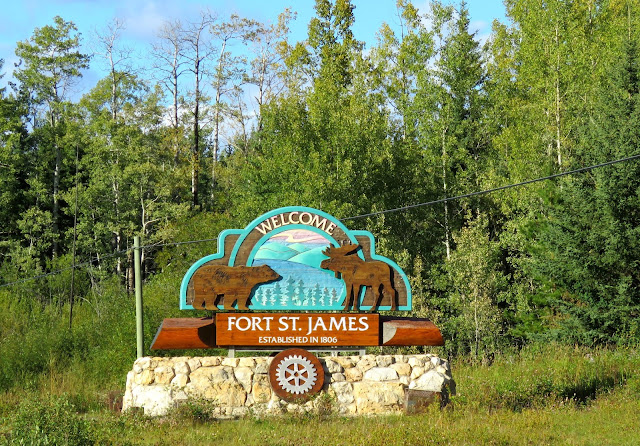 From Vanderhoof we decided to take a side-trip to Fort St. James...and immerse ourselves in a little British Columbia history.  We had no idea how beautiful it would be there! 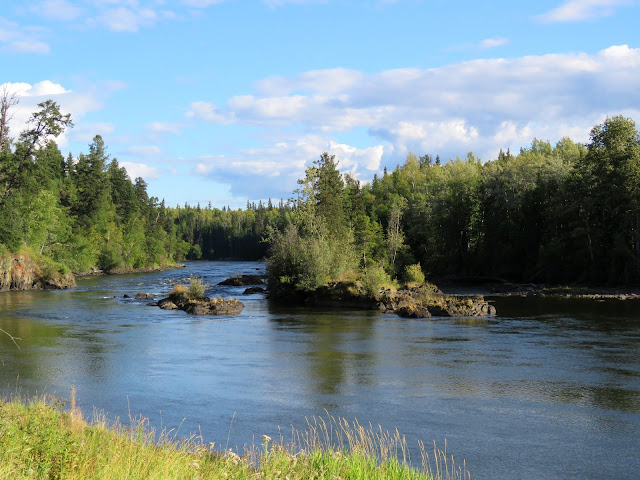 From the banks of the Stuart River... 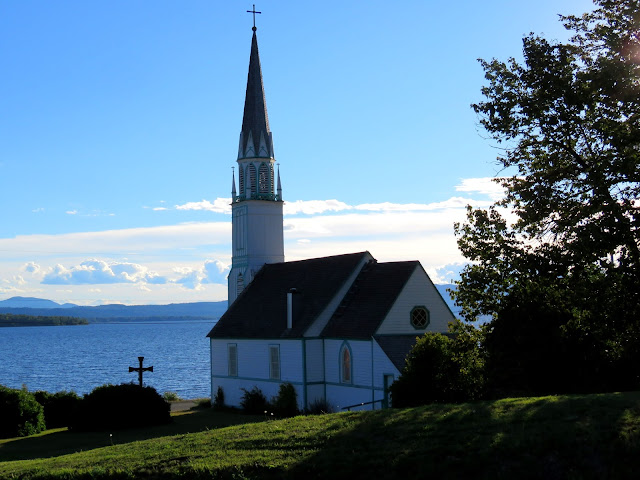 ...to the shores of Stewart Lake 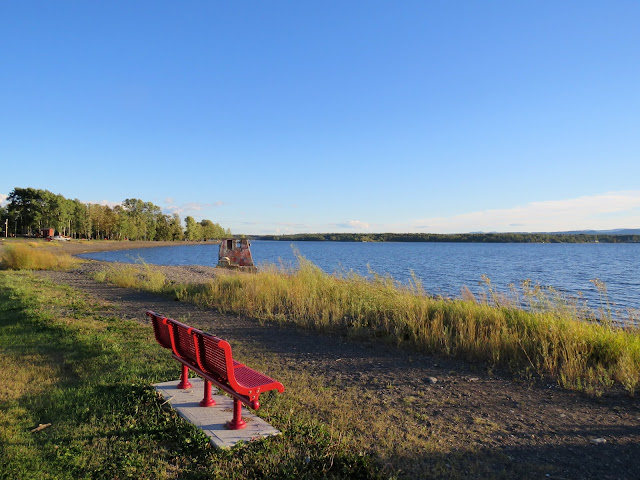 ...we could see why Simon Fraser chose this site for a trading post when he first arrived here. 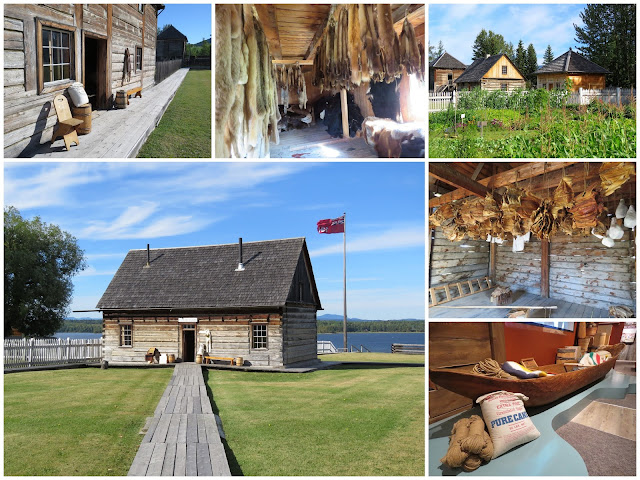 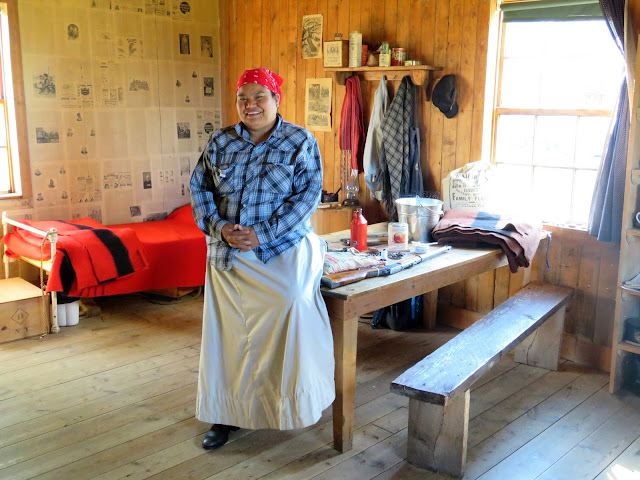 We had a nice chat with the 'hostess' in one of the buildings.  She encouraged us to sit in the 'recliner' that sat in one corner...once used by the officials at this trading post.  We had a good laugh at the story she shared with us.  On a recent morning...while the sun streamed in through the windows and the tourists were no where to be seen...she had settled into the recliner and fallen asleep.  Meanwhile a party of tourists arrived and thought she was part of the decor.  A prop.  She awoke with a start as one of them poked her in the stomach.  She screamed as she ran from the building...and has been banned from sitting in that reclining chair ever since.

We learned a lot from her.  She told us how the men who came to work and stay at this remote post were offered their choice of young brides from among the local tribes.  These marriage contracts were only good for five years.  At that time the employees of Hudson's Bay Company could return to their homeland...and the local bride went back to live with her family.  Sad. 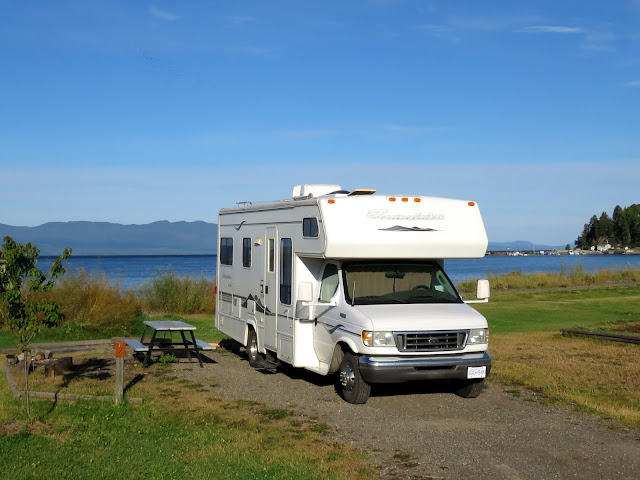 We camped at a municipal campsite on the shores of Stewart Lake... 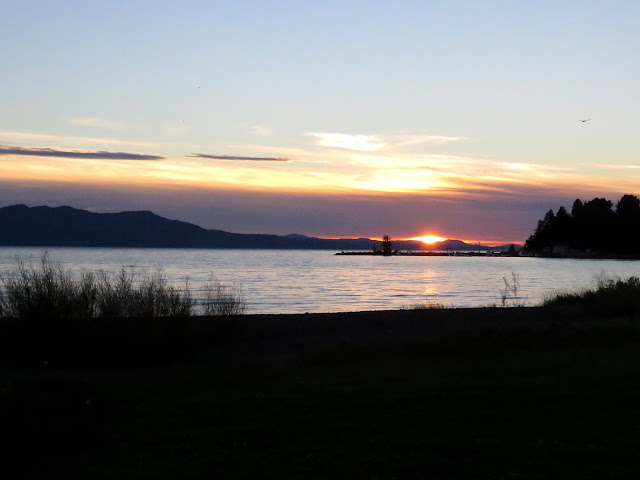 ...and watched the sunset in the evening.  Far from the crowds!


We made our back to the Yellowhead Highway and carried on our westward journey...through what is known as 'the lakes district'. 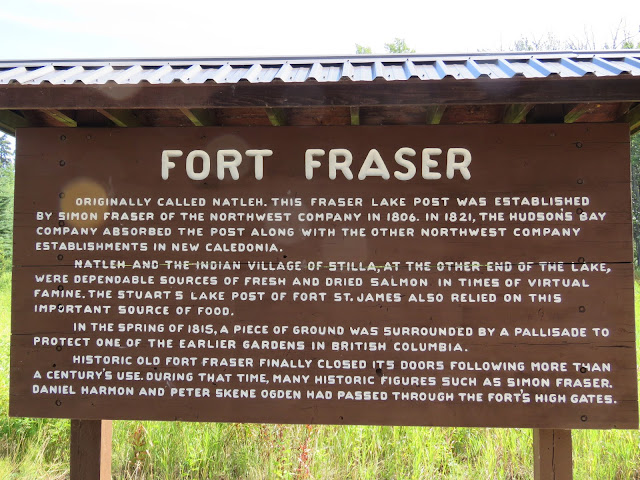 We passed through Fort Fraser...established by Simon Fraser in 1806. It was in Fort Fraser that the last spike on the Grand Trunk Railway was driven. 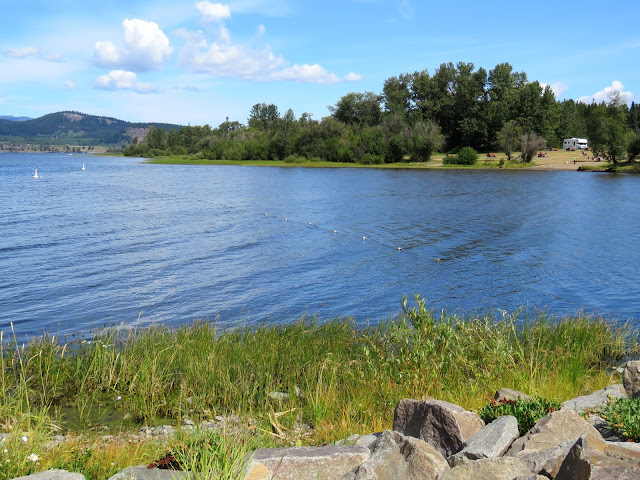 We visited Beaumont Provincial Park and had a picnic lunch at Fraser Lake.

Smithers lies about halfway between Prince George and Prince Rupert and has a population of 5500.

We made a little detour off the highway at Smithers and visited Twin Falls...some fifteen minutes drive from downtown.

The weather had changed and we were now sight-seeing in the rain.  We couldn't see far... 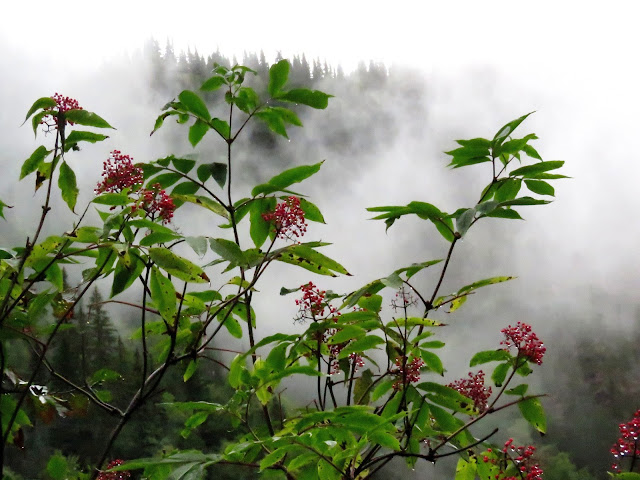 ...but  the foliage along the path painted a pretty picture! 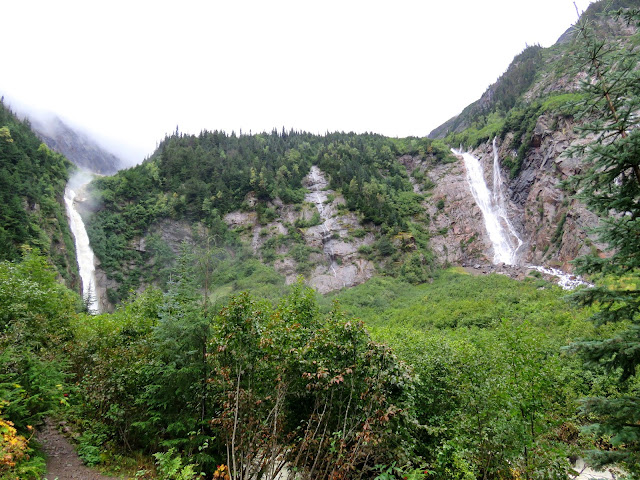 The viewing platform for the Twin Falls was a short walk from the parking area. The glacier which lay just above was shrouded in mist.

About twenty miles further along the Yellowhead highway is Moricetown...a Wet'sueten First Nation village of 800.  Late summer is the perfect time to stop and watch the locals fishing in the crashing whitewater of the Bulkly River at Moricetown Canyon. 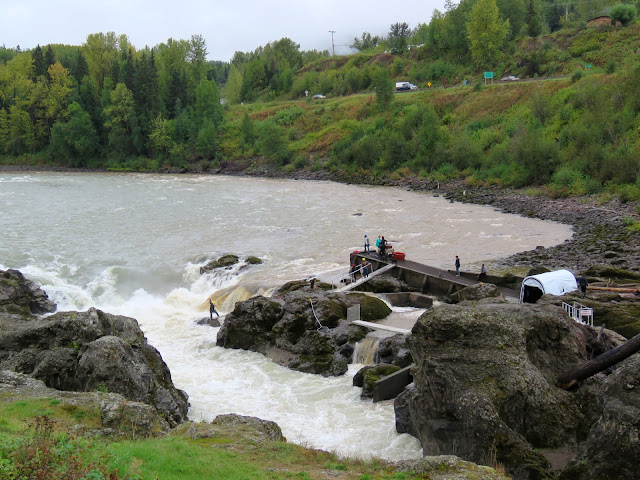 They fish with a dip net as the salmon make their way through the gorge... 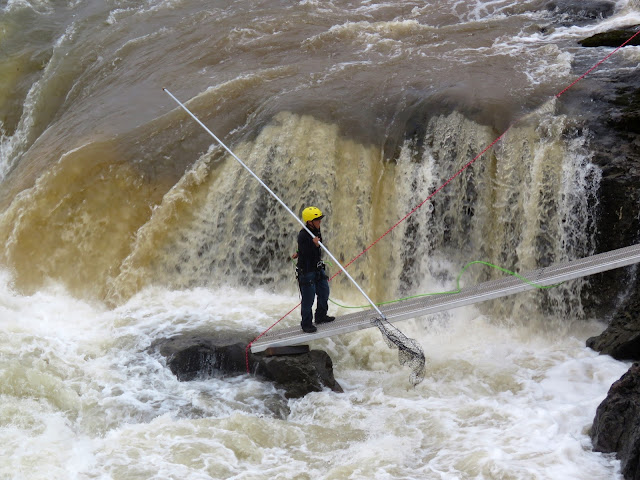 ...just as they have always done. 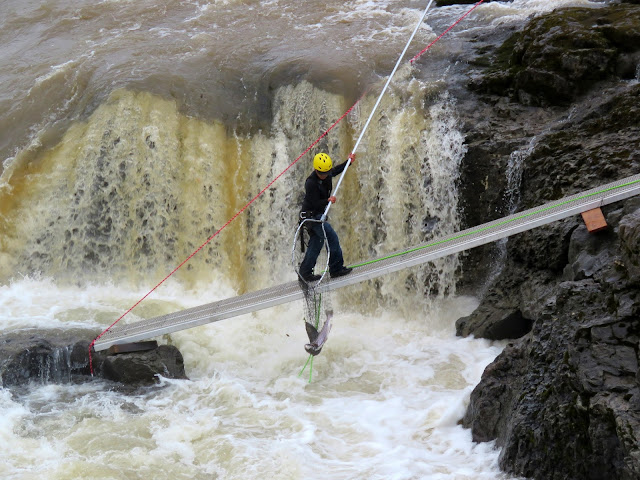 And it didn't take many dips to catch two large salmon in this net! 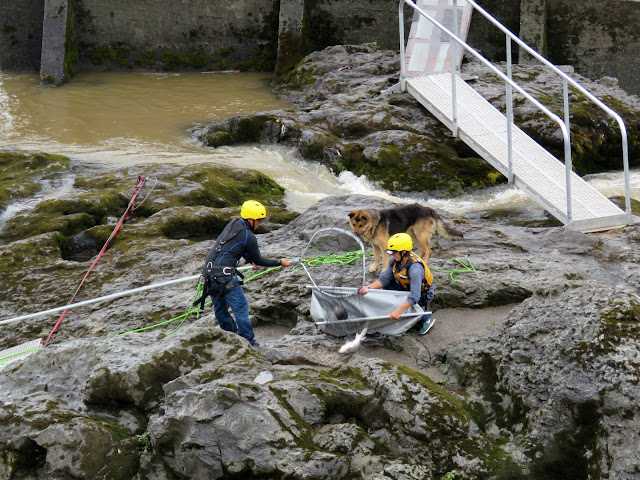 There were a lot of helpers (and their dogs) waiting for the snagged salmon.

From Moricetown it is another 200 miles to Prince Rupert (passing through Terrace en route).... 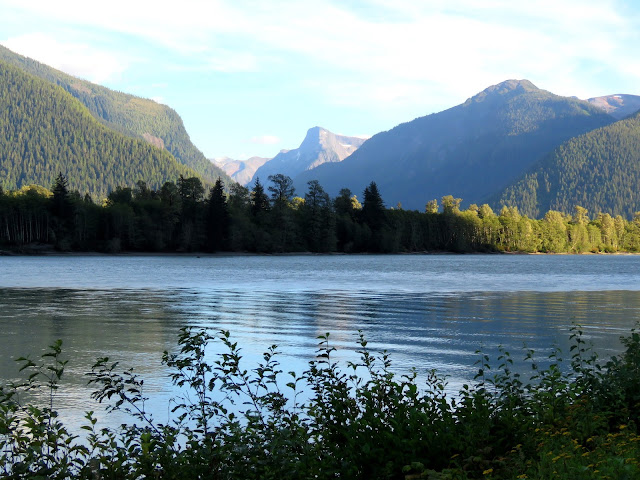 ...with amazing scenery long this stretch of highway. 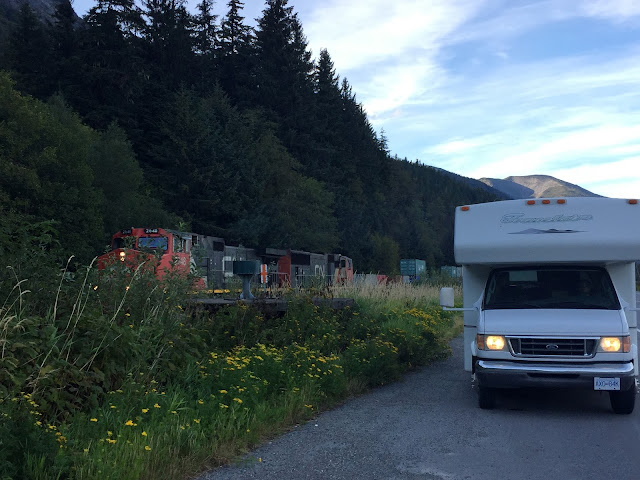 We kept pace with the trains running alongside the highway... 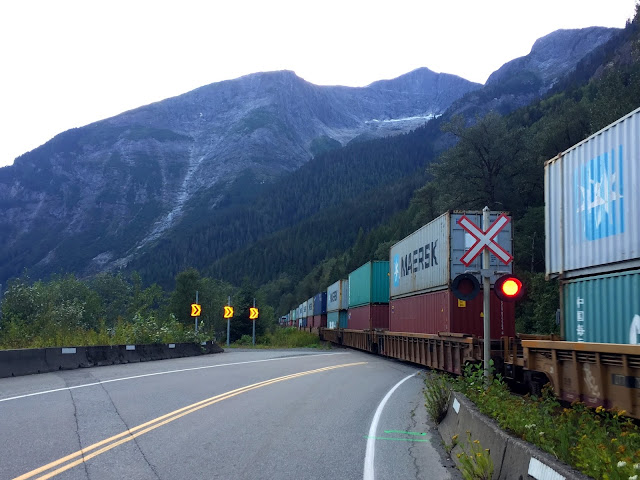 ...and on occasion we  yielded to them! 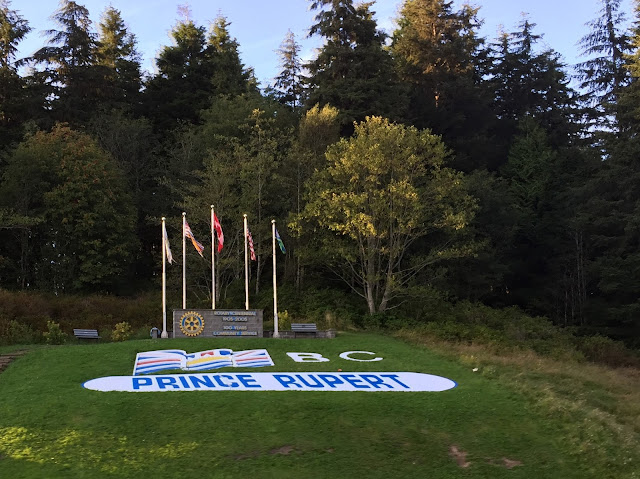 And then...Prince Rupert.  It seems like the end (or beginning) of the Yellowhead Highway.  But in reality, the highway actually starts on Graham Island of the Haida Gwaii, with Mile 0 being at Massett.

Prince Rupert is a city of some 13,000 people...nestled on a small, mountainous island at the mouth of the Skeena River.  It is a center for commerce and transportation...and boasts a very busy cargo port.  Everything at the port seems to be about fishing or logging.  Unless here happens to be a large cruiseship in port...on its way to Alaska. 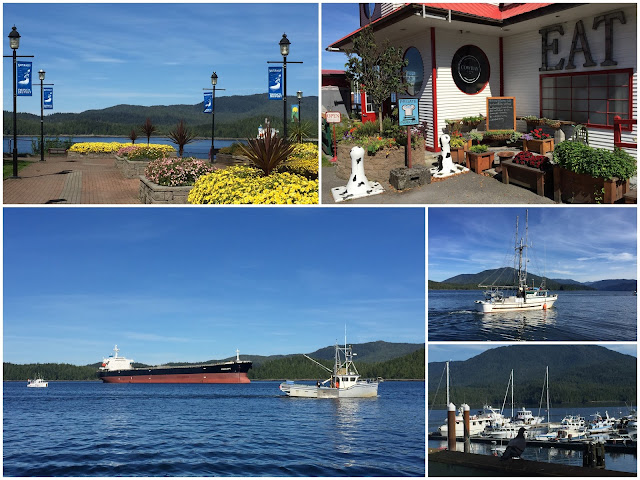 We had a sunny day to spend in Prince Rupert before setting sail for Haida Gwaii...so we did what the cruise ship tourists do.  We strolled about the harbour and the shopping district of Cow Bay.  We visited the Museum of Northern BC. 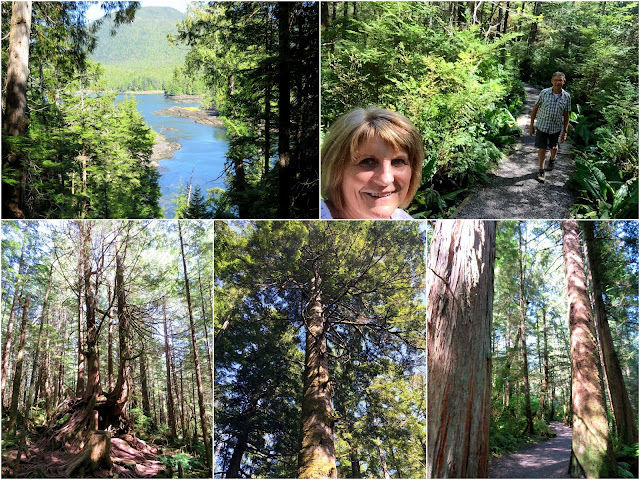 And in the afternoon  we hiked out to Butze Rapids...a short thirty minute hike to the viewing platform. The rapids are caused by the ebb and flow of the tides and can apparently be quite spectacular.  Things were fairly calm when we were there...since we hadn't checked the tide schedule at all.  But the trail itself was great for a cool walk on a hot day...through old growth forests.

It was a lovely day and ended with dinner at the Crest Hotel with my cousin Sandy and her husband (who have lived in Prince Rupert for thirty years) and a friend from Switzerland.  The food and was fabulous...as was the fellowship around the table. 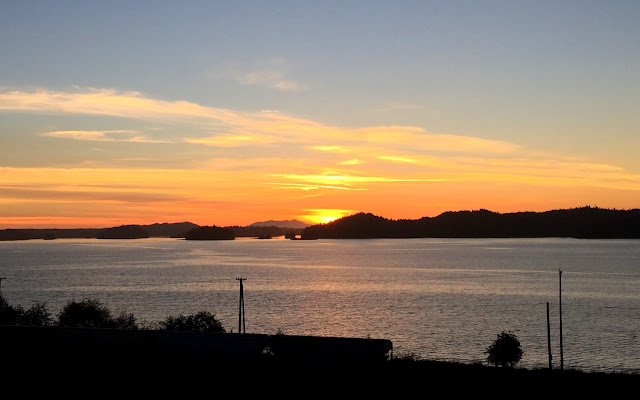 I'll end with a photo of the sun setting over the harbour of Prince Rupert that day.

And that was a little of what we experienced on our travels along the Yellowhead Highway in northwest British Columbia this summer.  It's a great road-trip.  Especially when the sun is shining!