our northern adventure ~ a synopsis

We are back...from our visit to the north coast of British Columbia. 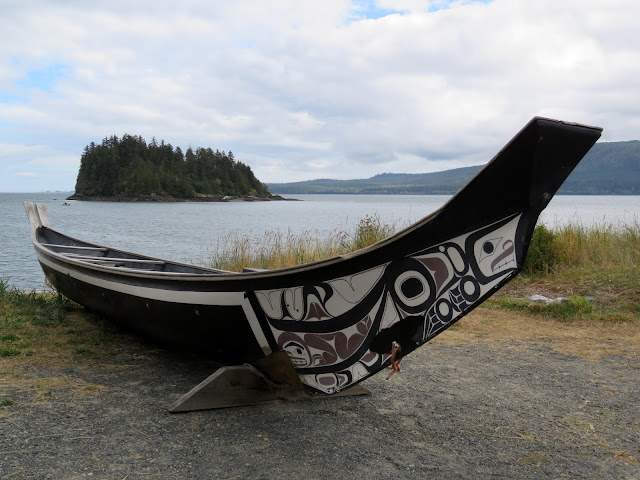 Our destination was Haida Gwaii...but our journey took us through so much more of our beautiful province! 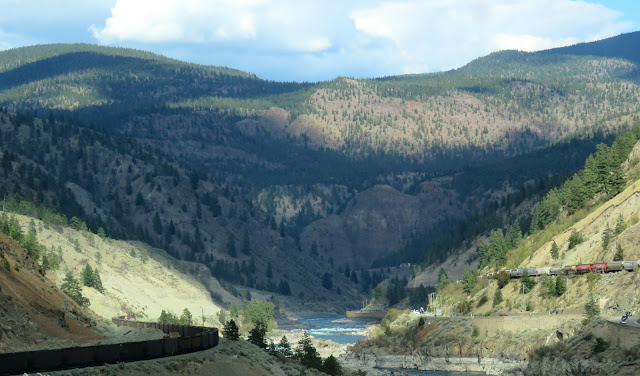 We joined the trains snaking their way through the Fraser Canyon...and stopped in Aschcroft at Horsting Farms for some fresh fruit and veggies.  And a piece of cherry pie from their bakery!

We left home at the tail-end of a heat wave and had almost forgotten what rain felt like...but just a few hours from home...the rain found us! 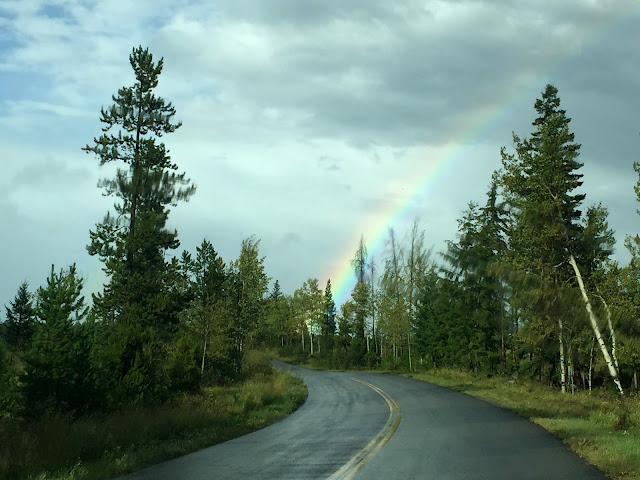 And then...a rainbow!  That made me smile. 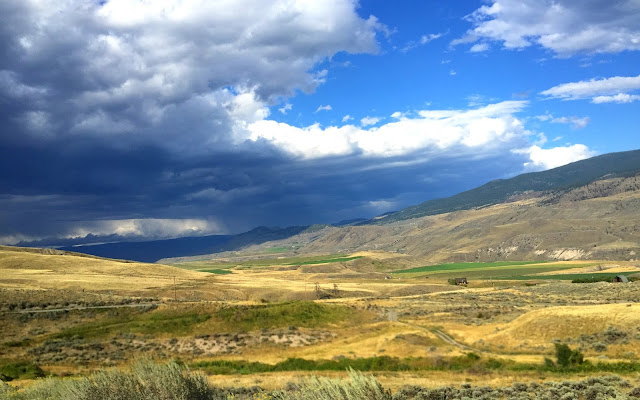 We drove through the Cariboo and explored the 108 Mile Ranch...which brought back good memories of time spent there so many decades ago.  We headed north to Prince George...and turned west on the one and only road that goes all the way to the coast...Highway 16.  We looked at the map and saw that Fort St. James was a bit of a detour...but it looked like an interesting place to see and played a huge part in the history of our province...and so we went! 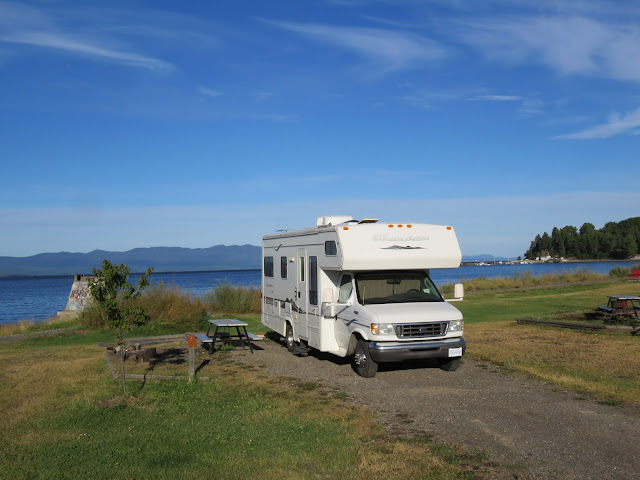 It was well worth the detour!  It was a wonderful surprise on the banks of the lovely Stewart Lake. 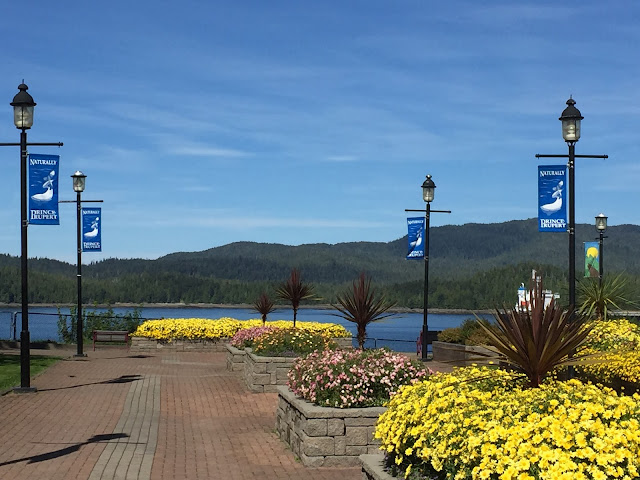 Next stop...Prince Rupert!  You may have heard that it always rains in Prince Rupert.  You heard wrong!  We spent two lovely, sunny days there before setting sail for Haida Gwaii... 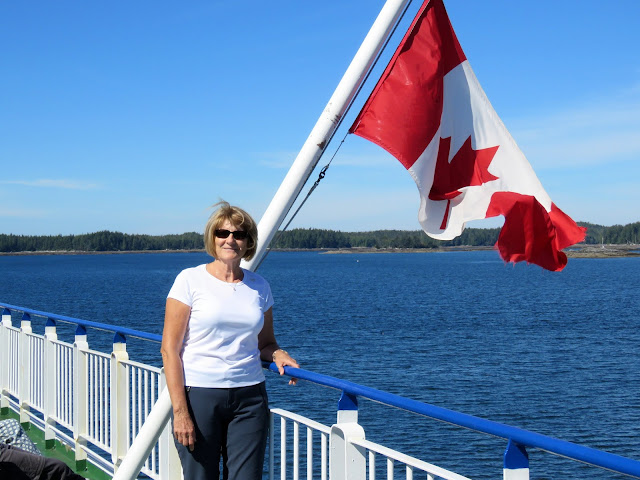 ...on B.C. Ferries Northern Adventure. That seven hour ferry ride was rather like a tropical cruise.  It was very warm out and we spent most of our time up on the deck.

We left our RV in Prince Rupert and rented a vehicle to use on the island...since we heard there were many gravel forestry roads to explore. 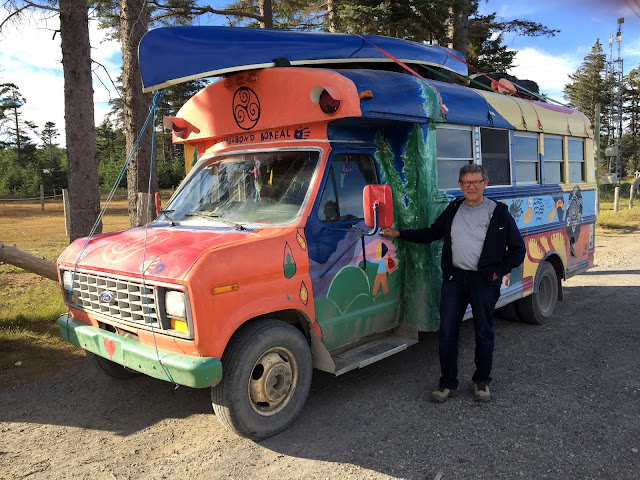 Like it?  Just kidding.  We saw many similar vehicles on Haida Gwaii...but we opted for a Ford F150 pick-up truck from National. 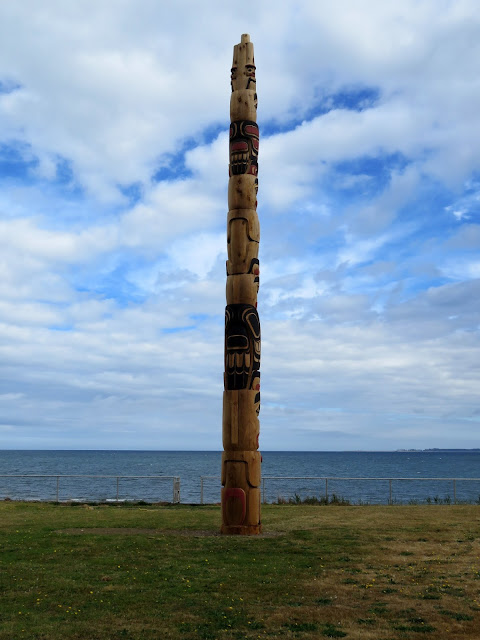 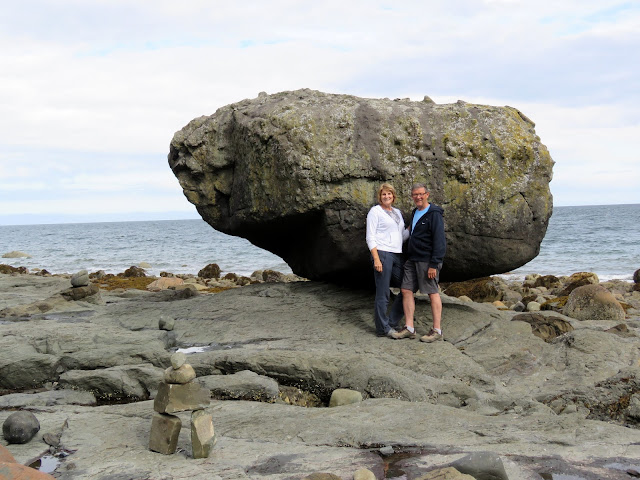 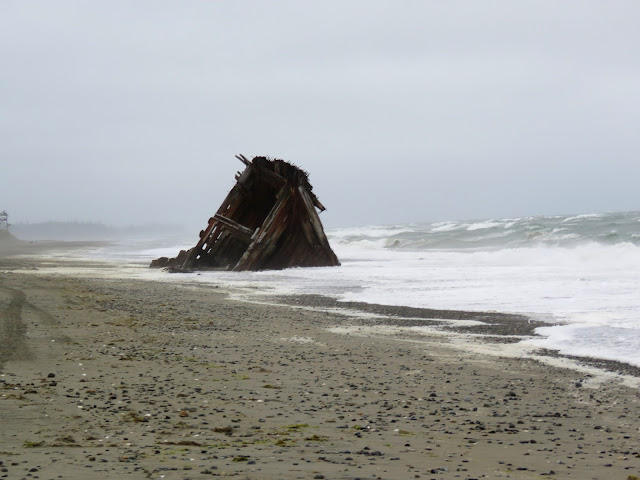 and shipwrecks on the shore...we enjoyed our unique adventure. 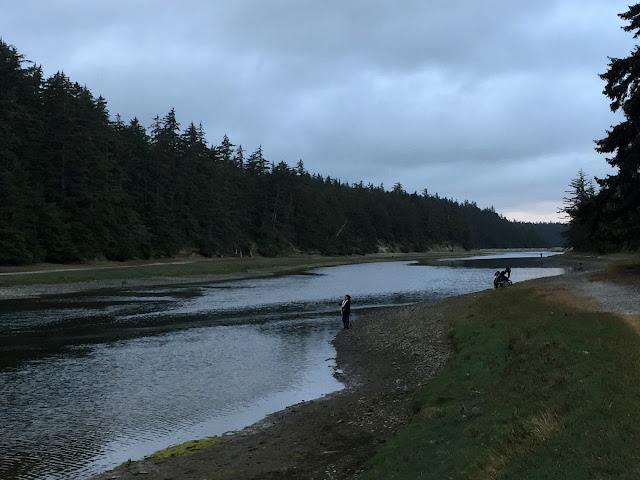 We stayed along the Tllaal River...where we could watch them fishing every evening. 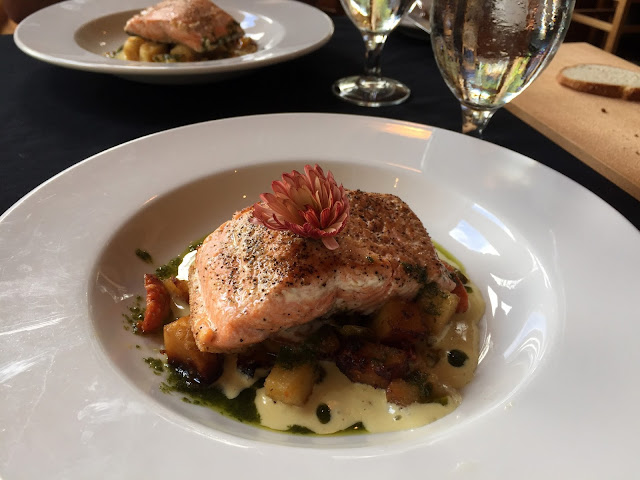 And at the Haida House right on the riverbank...we enjoyed the catch of the day! 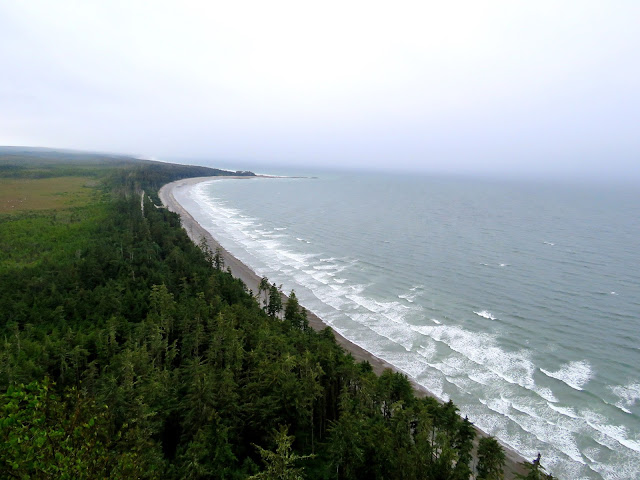 On the north shore...we hiked up Tow Hill for a wonderful view of the beach. 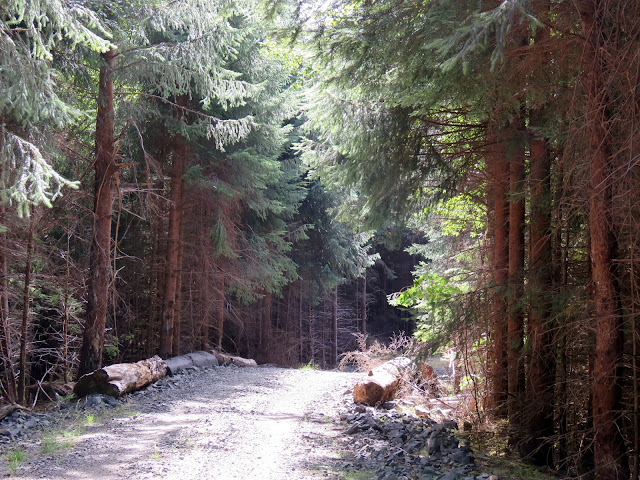 We drove down logging roads...hiked through old-growth rainforest...

...and ate our lunch on a deserted beach where the only 'footprints' in the sand were those of a bear. 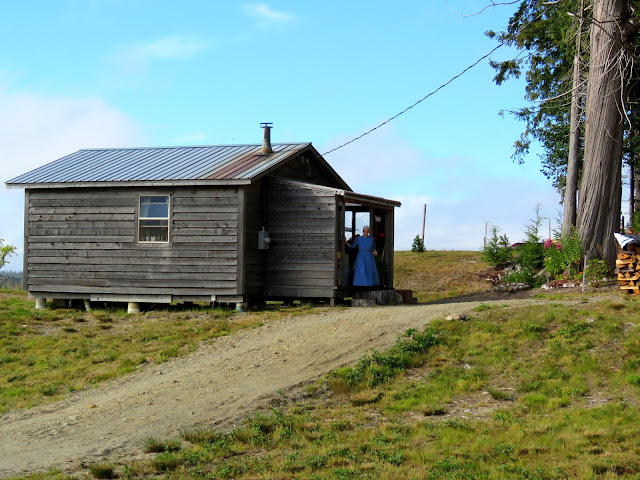 We found that there are Mennonites living near Port Clements....and that they are friendly and invited us to join them at their church service on Sunday.

There's so much more to share about Haida Gwaii...but I'll save that for another day.  It really was an excellent adventure! 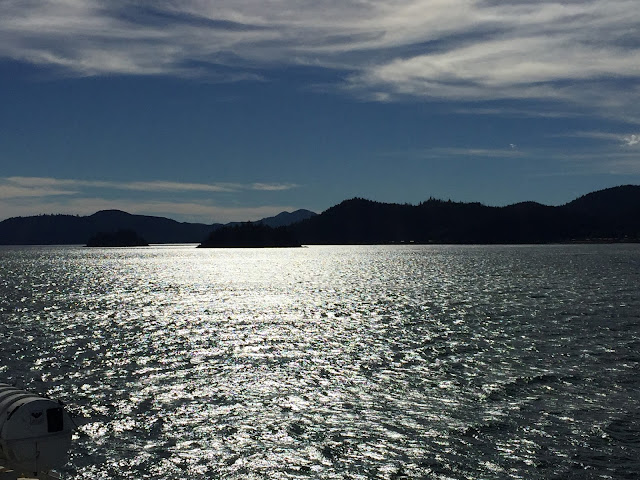 This was the last photo that I took at Haida Gwaii...the smooth waters of the bay as we were boarding the ferry to leave early one morning.  Don't let those smooth waters fool you!  Not long into the crossing we hit rough seas...and there was no turning back. Most who had eaten breakfast were sorry! It was definitely a memorable boat trip.

Back on the mainland...we were reunited with our RV for the rest of the journey.  And this time we had rain in Prince Rupert...and for most of the trip home. 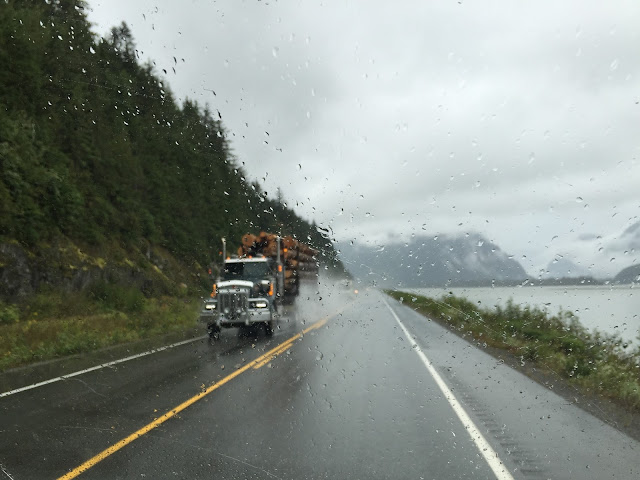 It seems there is still a lot of logging happening in northern BC...judging by all the logs rolling down the roads. 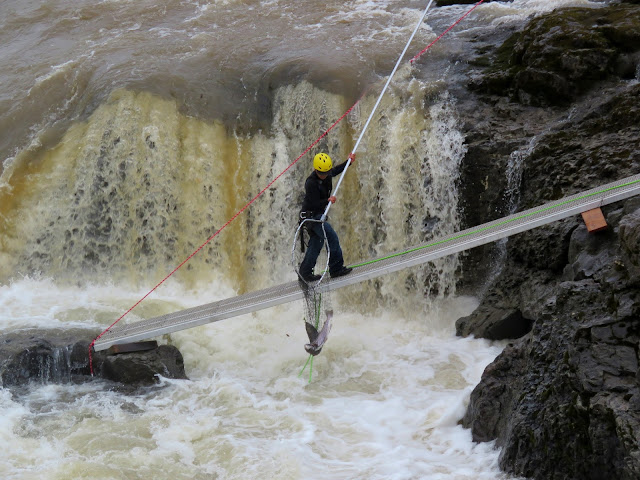 At Moricetown...we stopped to watch the local fisherman pulling the salmon out of the river as it rushed through a canyon. 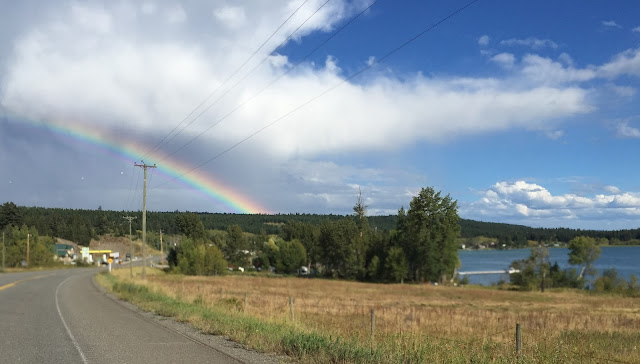 As we pushed for home on the last day of our journey...the rainbow appeared in the sky once more.  A rainbow as we left home...and another as we returned home.  I like that. 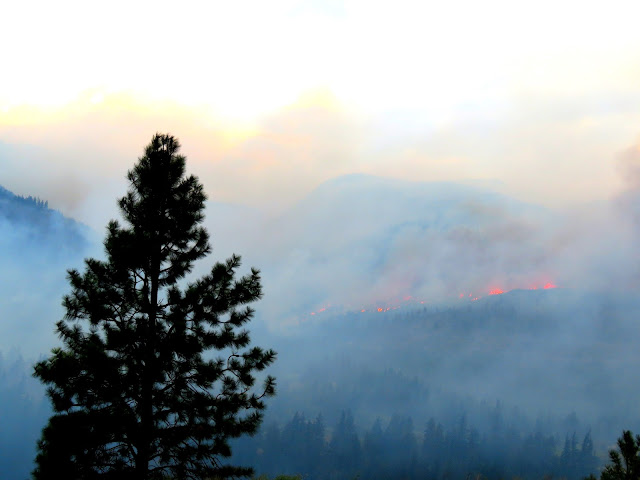 In the Lytton area...we drove through the haze of a massive forest fire burning just off the road.  And soon we were home... 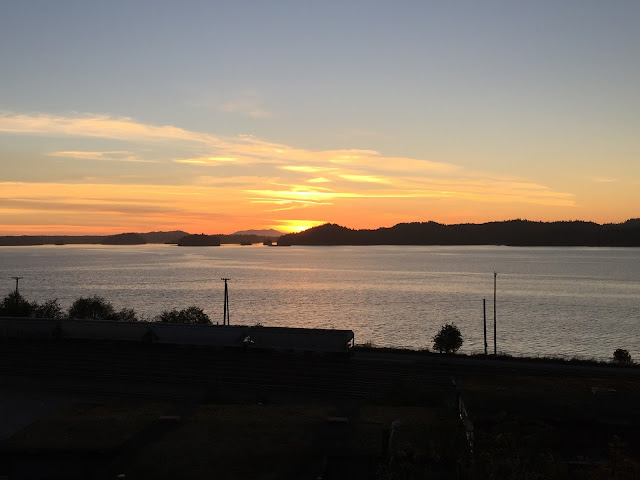 ...with so many good memories of the people and places we had visited on our trip.  I'll be back with more of our northern adventure.  Soon!