Iceland ~ The Land of Fire and Ice

The world is a book...
each new place another chapter to be read.
Who knew that there was such spectacular beauty in this small country?  There is so much more to Iceland than I had ever imagined. It is home to Europe's largest glaciers and also one of the world's most active volcanoes, and is often called 'The Land of Fire and Ice'. 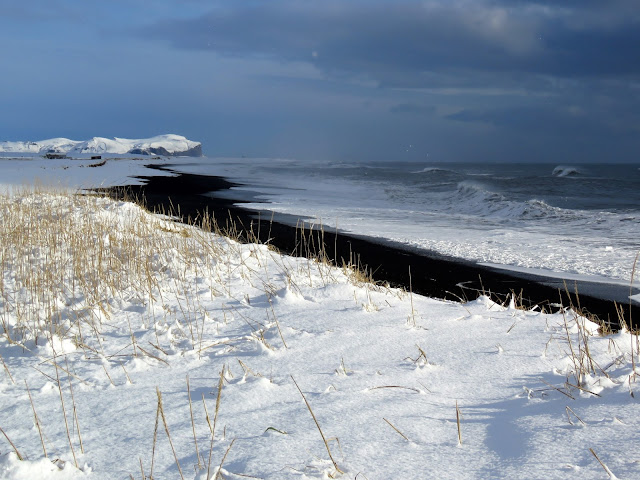 We made the most of our six-day stay...visiting many of the attractions of south-west Iceland.  We had pre-booked tours for the first few days, with intentions of renting a car and doing our own thing after that.  In the end, we decided that organized tours were pretty stress-free, so we stuck with Reykjavik Excursions.

The 'Golden Circle' tour is a must for all visitors! 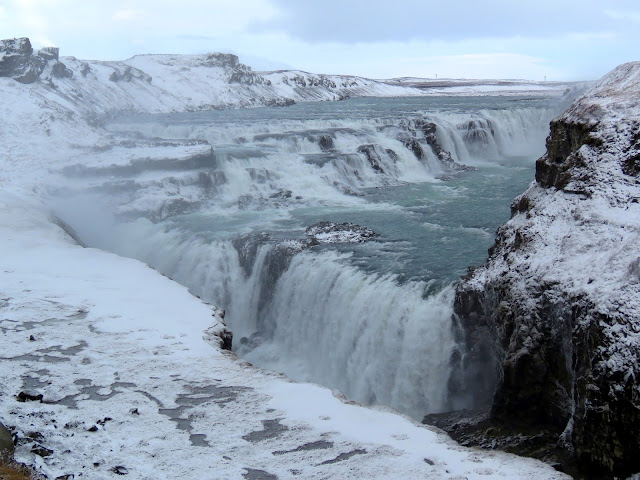 Gullfoss is one of the most popular attractions in Iceland...where water plunges 32 meters into a rugged canyon.  It was quite spectacular to see. 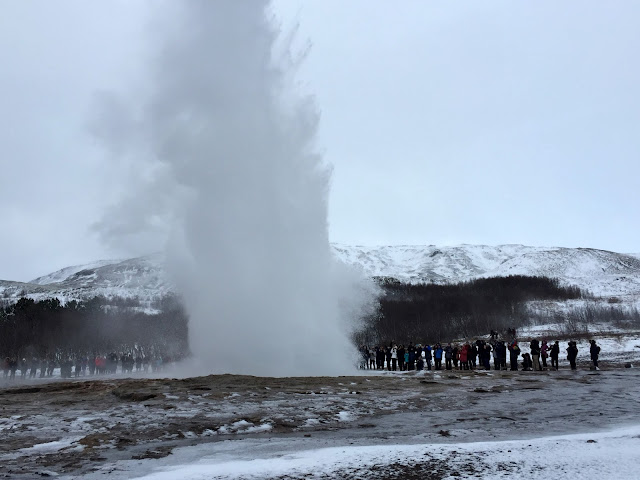 Another stop along the Golden Circle is the highly active Geysir Hot Spring Area with boiling mud pits and exploding geysers. The Strokkur spouts water 30 meters (100 ft) into the air every 5-10 minutes. We lined up with the others at a safe distance to wait for the eruption...and then it totally caught us by surprise. By the time I had my gloves off and the camera ready, the geyser was long gone.  So we waited again, sans gloves and camera poised this time.  The area has been active for more than 1000 years and has over a dozen hot water blow holes. 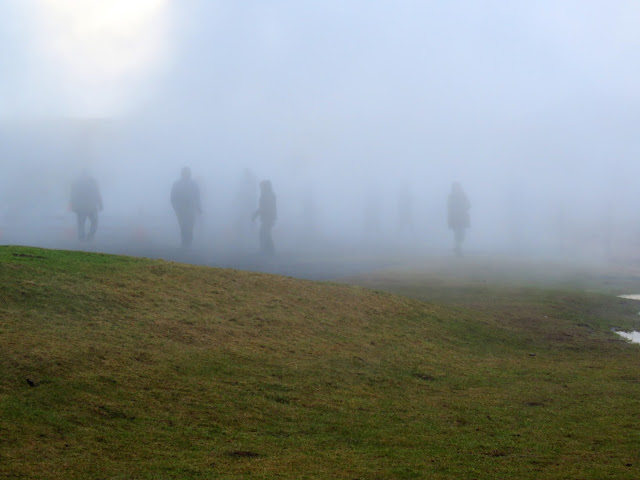 We checked out  Europe's most powerful hot spring...Deildartunguhver....and walked about in the steam.  It provides enough hot water to heat all the homes in the entire region...as well as hot mineral water for the bathing/showering pleasure of the locals. 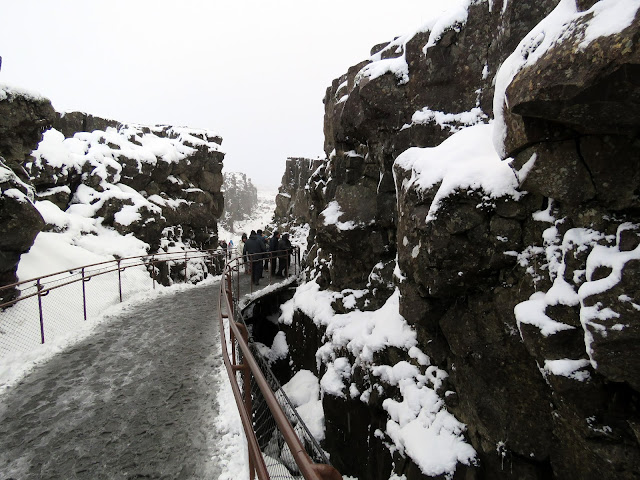 Our last stop on the Golden Circle tour was Thingvellur National Park where we walked along the path between two continents.  The park lies in a rift valley between the North American and Eurasian tectonic plate, the source of much earthquake activity. This location also plays a key role in Icelandic history as the spot where the oldest existing parliament in the world first assembled back in 930 AD. Because of this, it has  been designated a UNESCO World Heritage Site. 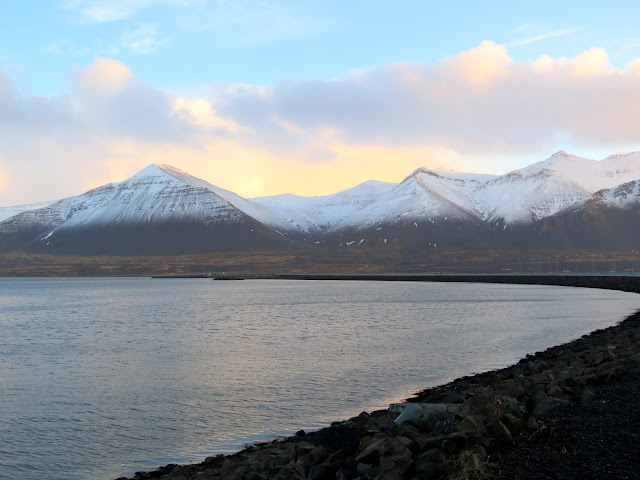 Right next to the national park is Iceland's largest and most historic lake, Thingvallavatn, which also straddles the American and European continental plates. 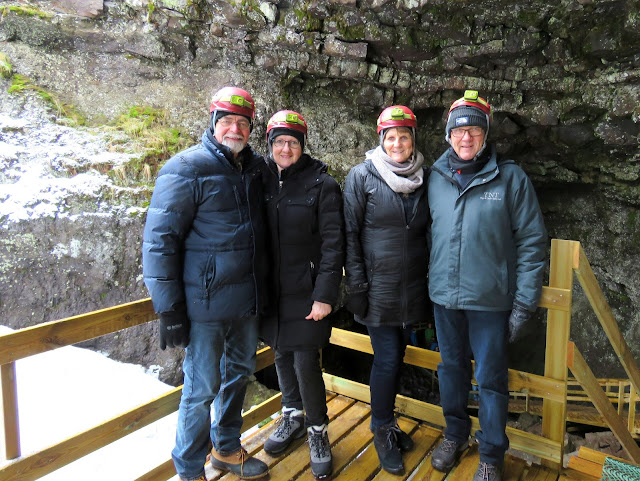 We paid a visit to the lava caves, wearing the mandatory helmets with headlights... 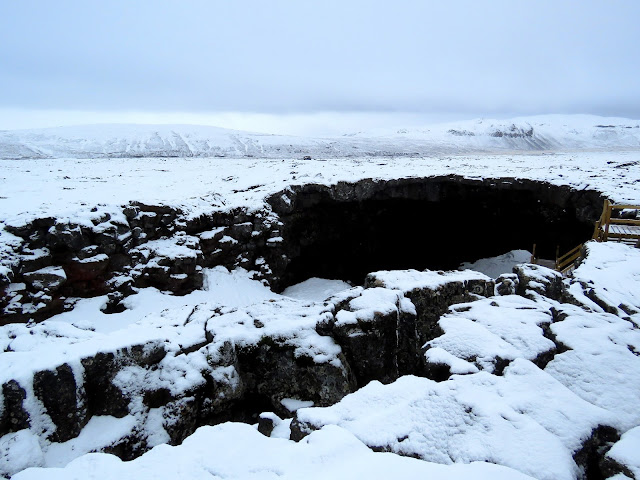 ...and took a tour into the depths of Iceland's largest lava cave.  The entry to the cave is through a huge hole in the ground, some 75 meters long. 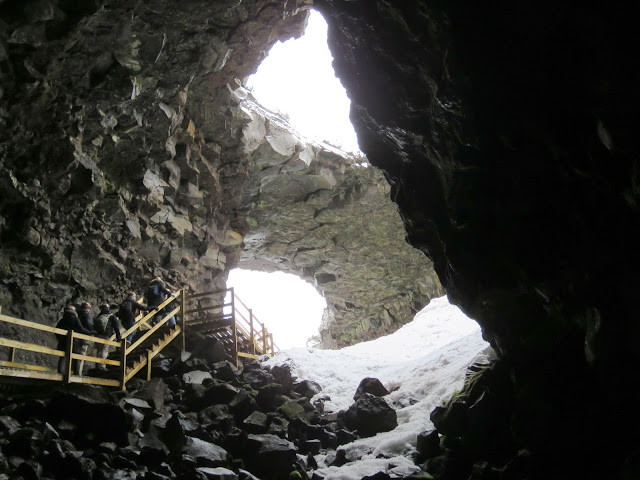 Once inside, we followed our guide down boardwalks deep into the cave.  Though there were a few narrow spots, most of the cave is rather like a big hall.  There was definitely much to see deep inside the cave, including spectacular ice formations.  We were quite happy for our headlights!  The guide had us turn them off at one point, just to experience real darkness.

Iceland has amazing waterfalls quite near Reykavjik. 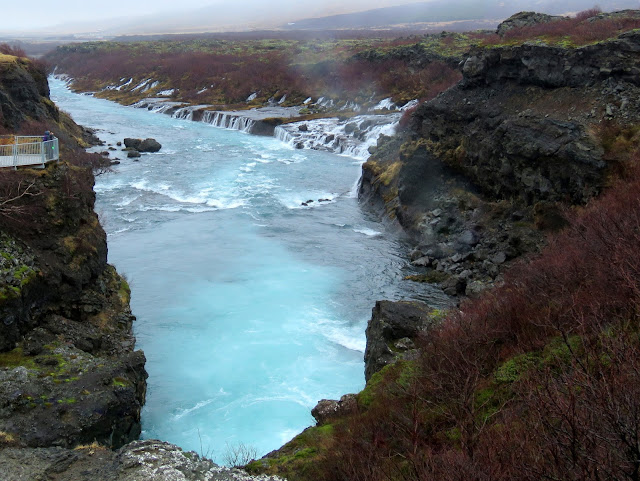 The waterfalls of Hraunfossar are actually a collection of countless creeks and cascades streaming out of the lava over a distance of about a kilometer.  Quite beautiful, actually...even on a drizzly day. 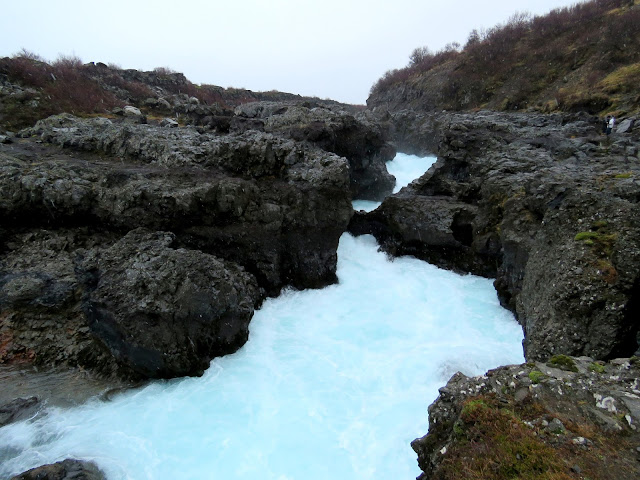 Right nearby is Barnafoss, which means 'children´s waterfall'...named after two children that fell in while trying to cross the river on a natural stone bridge. 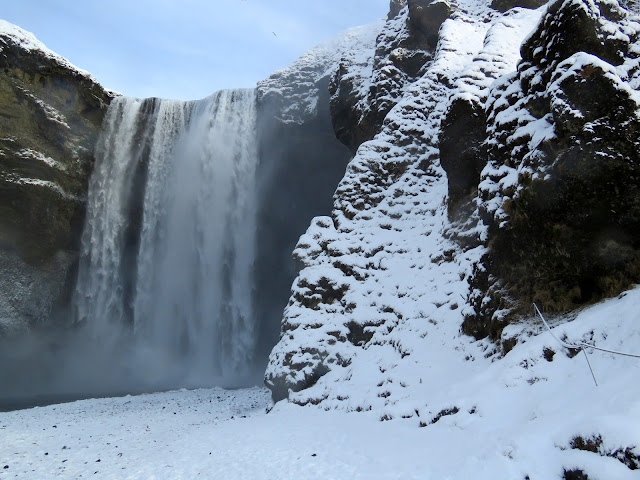 On the south coast is Skogafoss...where the water tumbles some 60m/200 feet over the cliff, producing rainbows in the sunshine. 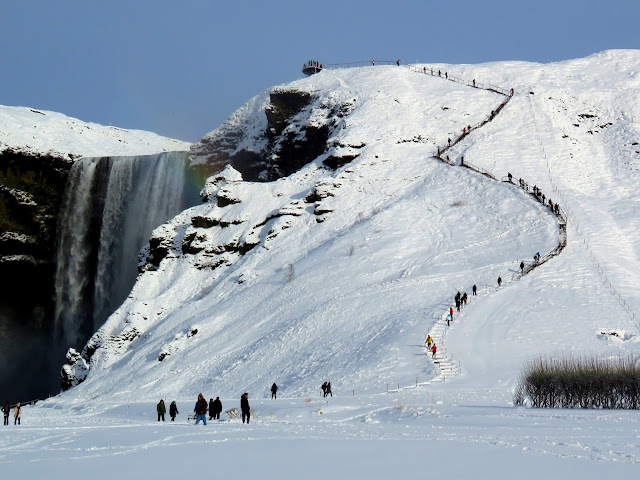 A stairway up the side led to a viewing platform on top...but we were content with our bottom view as we had more places to go and things to see. 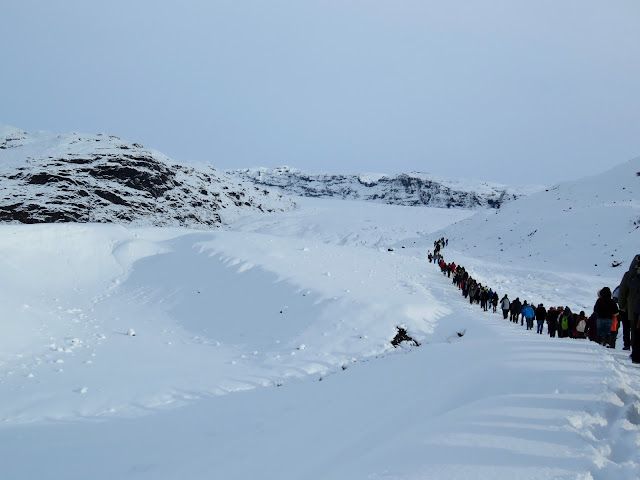 Our next stop was the Mýrdalsjökull glacier....which covers an active volcano called Katla. It last erupted in 1918, and is 'overdue' for another eruption. 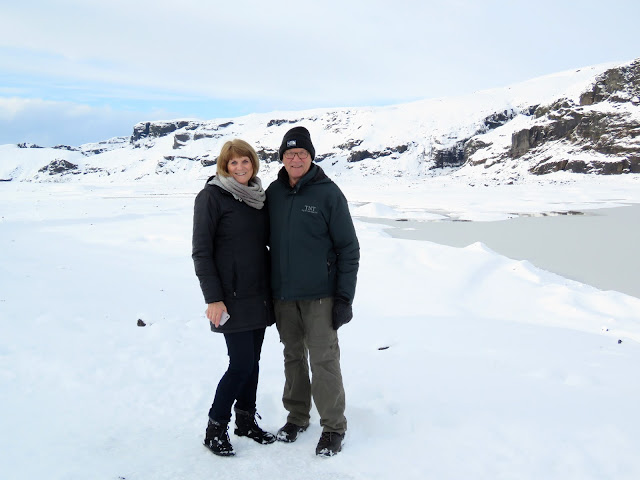 Since everything was blanketed in snow, it was a little hard to see where the glacier actually started, but our glacial hike was a most memorable experience! 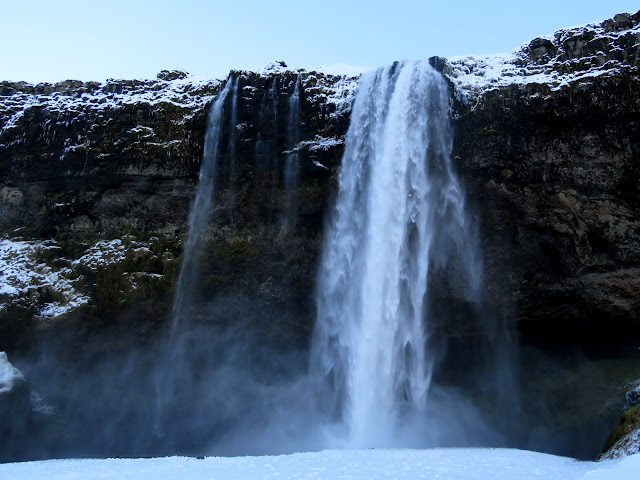 And then there was the Seljalandsfoss waterfall...unique as the only known waterfall you can walk behind. There is a footpath that goes behind the waterfall and into a small cave.  In the interest of staying dry...we never checked that out! 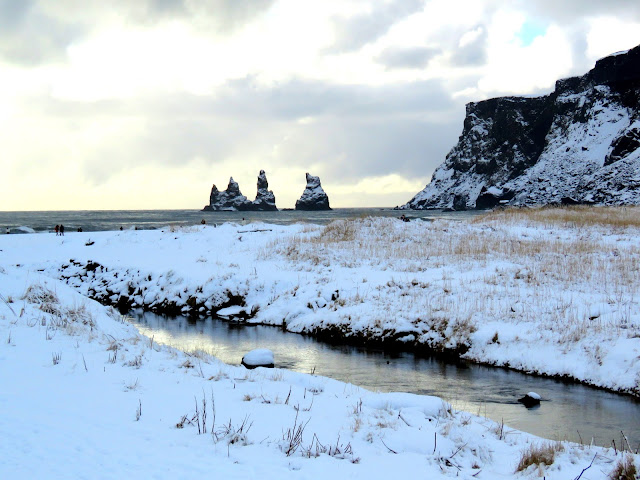 Our drive along the south coast took us to the charming village of Vik... 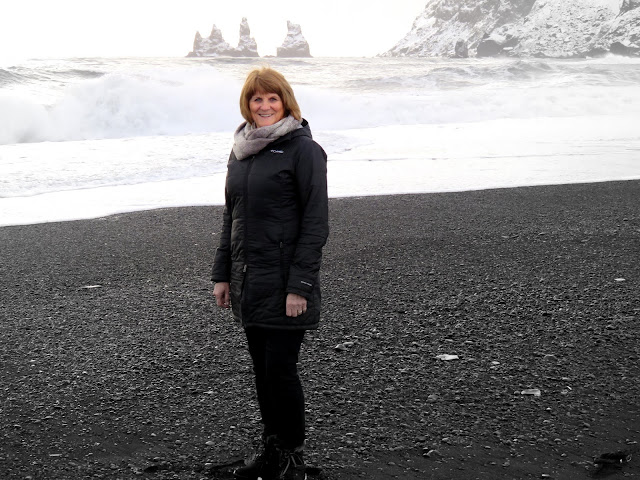 ...and the black volcanic sand beaches nearby. 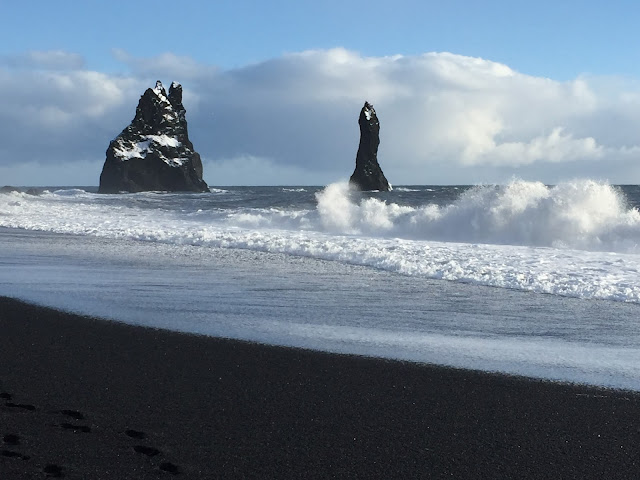 The basalt columns surrounded by the churning waters of the Atlantic made for a dramatic scene. 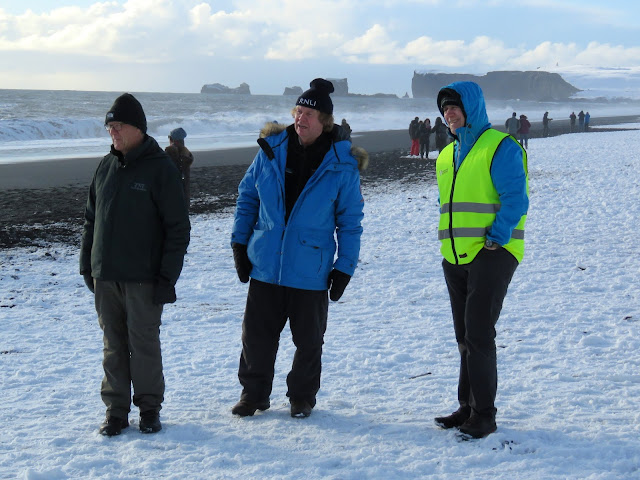 Our tour guide, driver and hubby watched as a group of tourists tried to escape a monster wave. They succeeded, but not without getting wet. 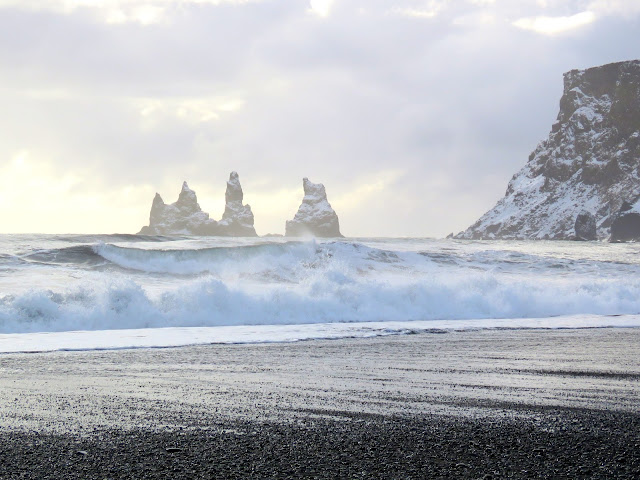 Those are powerful waves! We were warned many times over to keep our distance. Just a month before our visit, a German tourist was swept out to sea at this very spot.  It was the second such drowning at this beach within a year. 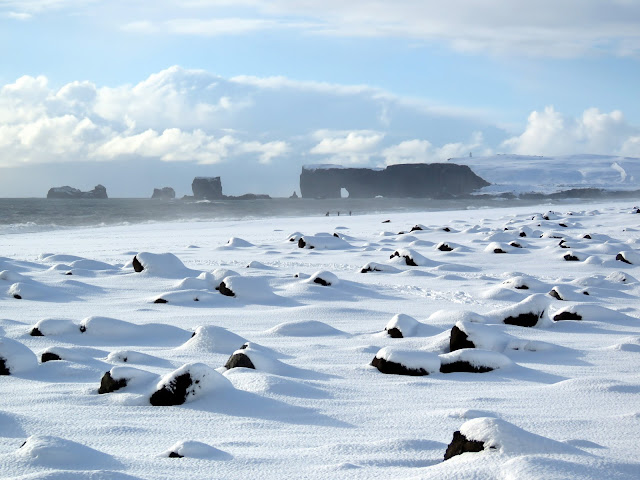 I loved the contrast of the fresh snow on the lava racks along the beach.  Black and white! 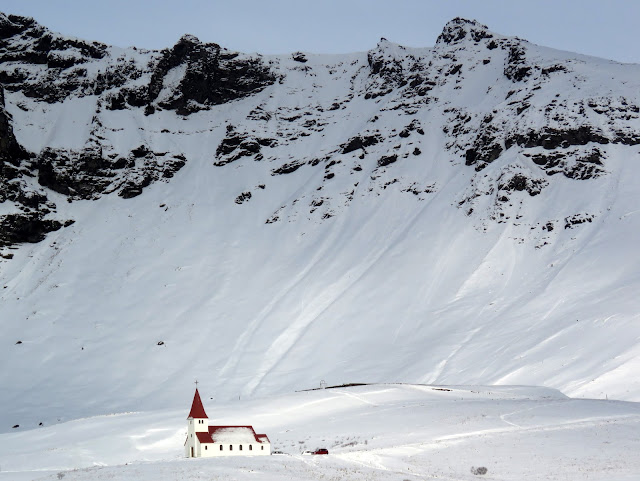 Every village seemed to have a picturesque white church with a red roof.  All were Lutheran, which is the Church of Iceland. 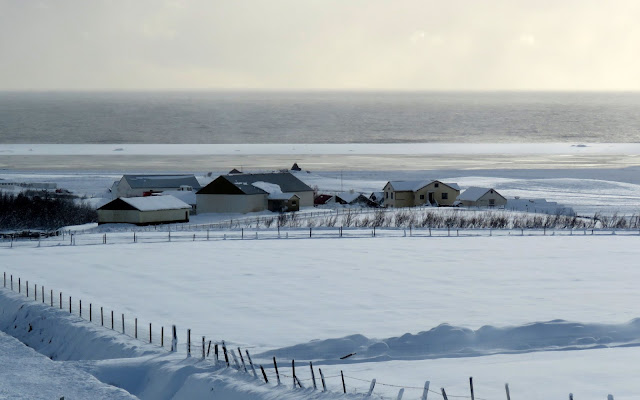 Small farms dotted the countryside. Some sat right on the ocean shore... 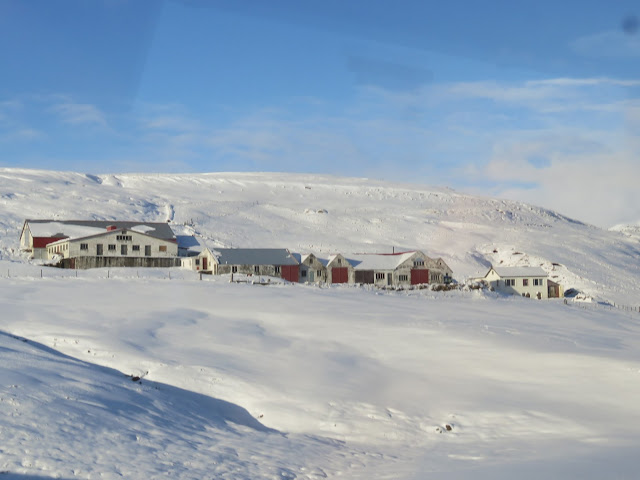 ...others were perched up on the hillside. 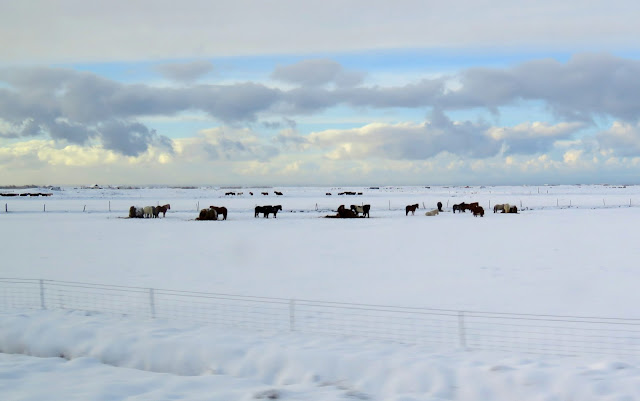 Icelandic horses could be seen out on the fields wherever we traveled...quite accustomed to snow.  They are a beautiful and unique horse with five gaits and the only breed of horse in Iceland. We discovered that horses are a big deal in this country...with a population of  320,000 people there are about 80,000 horses.  And they are also a big deal for tourists, with one in four visitors going riding during their stay.  We chose not to. 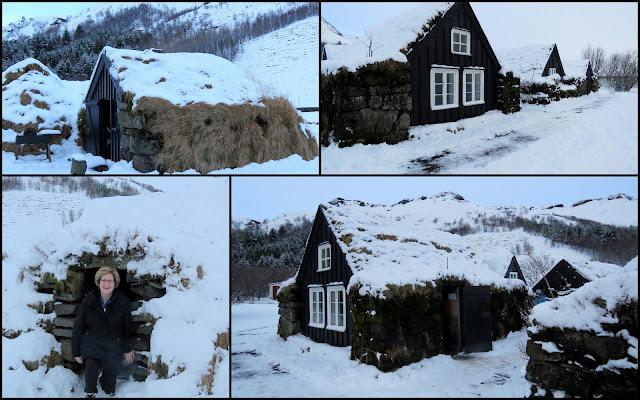 Another interesting stop on our last day of touring was the Skogar museum on the south coast, with its historic turf houses.  The original homes were built of wood or stone (birch was the only wood available) and then covered in turf to stand up against the harsh climate. They were tiny homes, with doorways meant for hobbits.

Our time in Iceland began and ended in Reykjavik. It may have been only six short days, but the memories are many!


No one realizes how beautiful it is to travel until he comes home
and rests his head on his old, familiar pillow.'
~Lin Yutang