If you don't find camping that exciting...try taking some grandchildren along! We have been taking Emme and Spencer camping every summer since they were wee little...they came complete with diapers, bottles and soothers the first time. I'm not sure what we were thinking!

They quite look forward to the annual camping trip...and with only one week left until school begins, it finally happened. 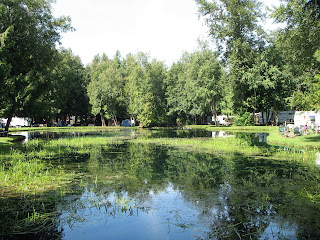 Their favorite spot to go is the Lynden KOA...it's close to home and there's no place quite like it! Funny thing...we used to go there with our kids when they were young. Their dad has great memories of riding his BMX bike on the track...paddling about on the paddle boats...and swimming in the pool. 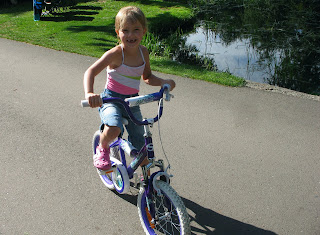 This year the girls loved riding their bikes around the campground. And they no longer needed floaties in the pool...although they still insisted Grammy come in the water with them. She had sort of planned to sit on the sidelines with all the other grammies and moms...but no way! 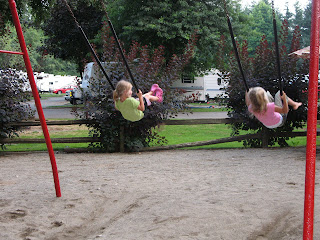 One of their first stops upon arrival was to check out the playground...and try a little synchronized swinging. 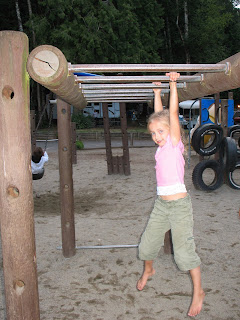 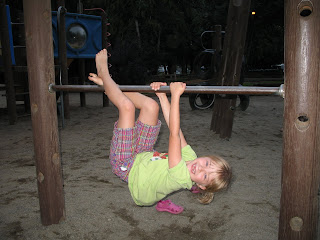 They had a fun time at the playground...and made fast friends with a little girl named Maizie. They had a fit of giggles as they recalled that Grandpa thought Maizie was a boy...Grandpa will have a hard time living that one down! 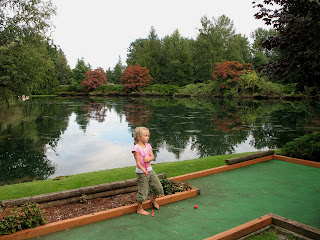 Playing a round of mini-golf is part of the routine. This year they actually knew what they were doing...and stuck with the game to the last hole! 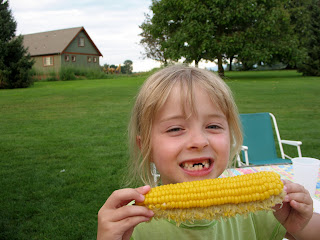 Just as we were about to eat dinner, Spencer informed me that she had a loose tooth. She thought maybe I could pull it out...I thought maybe she could wait until she was home and mommy could pull it out. After a little negotiating...Grammy pulled out the tooth. It was swift and painless...and she never shed a tear! Eating corn on the cob with all those spaces proved to be somewhat of a challenge however. We left the tooth fairy a note...asking that she not come for the tooth until Spencer was back home, since she really wanted to show Mommy her tooth. The tooth fairy complied...and Spencer took her tooth home for show-and-tell. 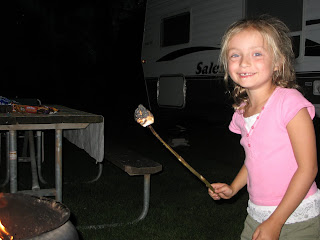 If there's a campfire...Emme will be nearby. She loves nothing better than burning things...anything will do! Her marshmallows usually go up in flames...and she's OK with that. 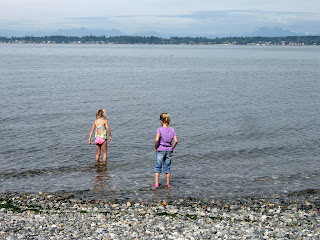 On Saturday we drove out to the ocean...and spent the afternoon beachcombing at Birch Bay. We had fish and chips at a seaside cafe...collected buckets full of shells...and poked at crabs, jelly fish and a snake. 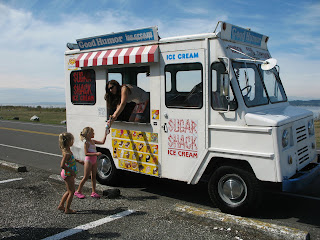 The girls heard the ice-cream truck from afar... 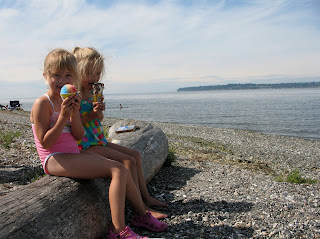 ...and talked Grandpa into buying them some ice-cream treats. 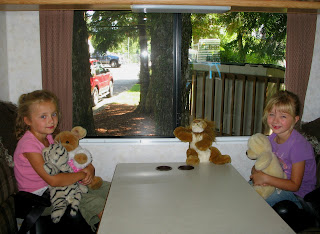 Soon we were on our way home.

The annual camping trip was far too short...there was no time for paddle boats...and why didn't we hike in the forest this year? Hmmm...I guess we'll have to go again next year!

And next year, there'll be no leaving Ryder behind. He sobbed his little heart out when he got left behind...and told Mommy he was having a 'bad day' many times while his sisters were away. 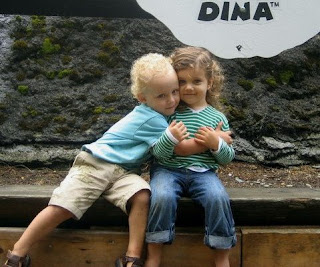 He was a quite pleased with his consolation prize, however...he got to go to Dinotown with cousin Ranen. His troubles were forgotten for a time!

If you want to add magic to a camping trip to the KOA...take some enthusiasm along (in the form of two six-year-olds). It was a fun time...just a little too short.