Let me take you back to rural Manitoba...and a short trip down memory lane. We left Carberry on Saturday morning for the drive north past Riding Mountain National Park and on to Dauphin...the destination of my uncle and aunt's 50th anniversary celebration. 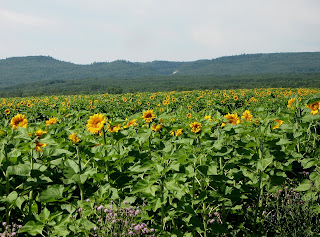 I loved seeing the sunflower fields smiling in the sun...and here's a surprise...they have mountains in Manitoba (clearly visible in the distance)!

Our route took us directly past the area where both my parents grew up...and so we took a little detour into the countryside of McCreary. My paternal grandparent's farm no longer has any buildings on it...however, my Grandma and Grandpa Isaak's place is still there. Few things have changed since they left in 1946...we stopped by and had a little tour. The family that purchased the farm over sixty years ago is still living there (a granddaughter gave us the tour)...and were more than willing to allow us to snoop. 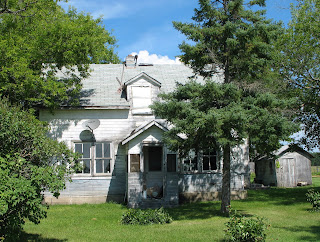 The house is virtually unchanged...and has not seen a paint brush in over half a century! 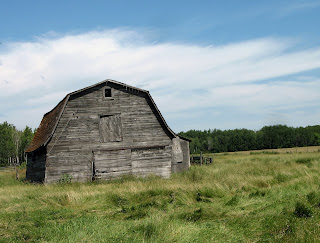 The barn is holding it's own against the forces of nature... 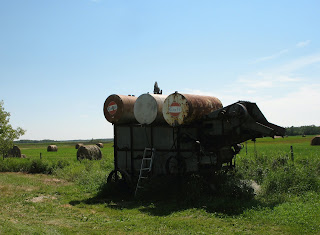 ...and an old threshing machine holds the fuel tanks. Peonies which once grew along a white picket fence in my grandmother's front yard are still there...the picket fence is long gone. It was good to see where my family came from...and also easy to understand why they left for British Columbia!

Once we arrived in Dauphin we checked into our hotel. Since we had neglected to book well in advance, we couldn't be too choosy when it came to securing a room. It was only because someone cancelled that we were able to find anything... 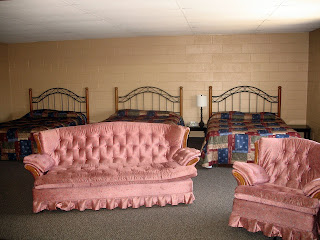 ...and what a room it was! It would have been great for a travelling baseball team or the like...but seemed a little large for the two of us. We had a good laugh when we opened the door...and saw three queen beds and a table that was suitable for a boardroom...along with a dozen or more chairs...and not one piece of artwork on the cinder block walls. Oh yes...and it also had the electrical boxes for the entire hotel complex...we were obviously trusted not to pull the switch on anyone's lights! 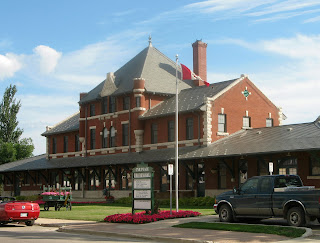 Dauphin has some great old buildings...this old train station being one of them. The anniversary dinner took place across the road in a lovely old brick hall which was the fire hall in the early 1900's.

It was a fun evening...also a walk down memory lane! 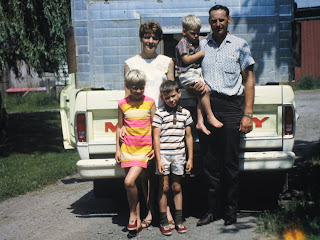 This was the family not so long ago.... 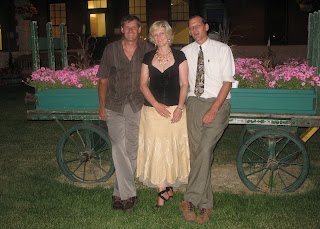 ...and now David, Heather, and Lynden (along with their spouses and families) shared with us some memories of their parents...a fitting tribute to fifty years of marriage!

Time marches on far too quickly... 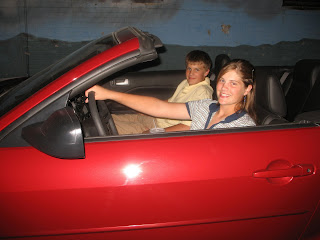 ...but surely Kiley is not driving already? My niece and nephew from Iowa hopped into this lovely red Mustang as we were parting ways that evening. Apparently she IS driving, but the car was a rental...one she quite liked!

On Sunday morning we stayed in our cavernous room to watch the Olympics...and saw USA defeat China in basketball.

After checking out of our hotel, we made our way to Winnipegosis for the afternoon... 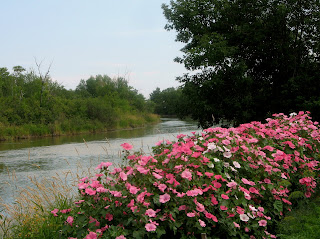 ...where we enjoyed a picnic beside the river at Uncle Dave and Aunt Justine's home, along with all the other family and friends that had come from out-of-town for the occasion. They really know how to put on a party! 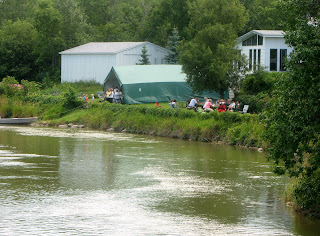 We ate and visited...and ate some more...some went fishing...and the afternoon was over all too soon. 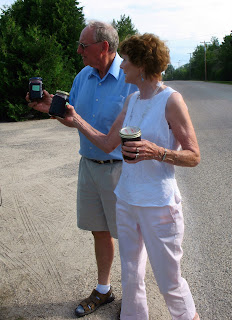 My uncle and aunt came out to the road to bid us farewell...and after feeding us all day, my aunt was sending along her homemade Saskatoon jelly. Now that is Manitoba hospitality!

In a day when long term commitment is not so popular, a marriage that lasts for 50 years is worth celebrating! They threw a party...we came from all over. They gave thanks to God for bringing them to this milestone... 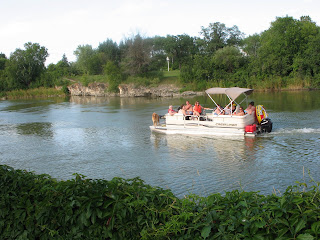 ...and together with all who were gathered, we wish them many more years of health and happiness!