Green bean soup was my favorite soup as a kid...and I still quite like it! Yesterday being a rather soupy kind of day (we broke some August rainfall records)...I decided to cook up a large batch of bean soup. It's one of those soups that I've never had a recipe for...so I'll do my best at guessing amounts...and you can feel free to add a little more or less of any ingredient suit yourself. 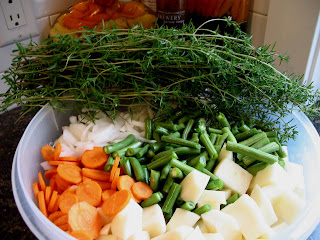 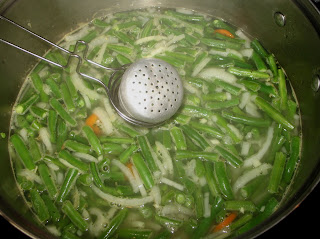 I put the summer savory and parsley in a spice ball and add along with vegetables. 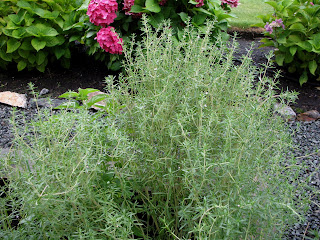 Summer savory is the key...you can't skip it!
I grow it in the garden specifically for this soup...
it also freezes well.
(Use about 2 teaspoons of dried summer savory if fresh is not an option.) 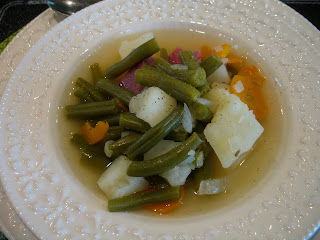 Serve with fresh bread...
and call it a meal!
Traditionally we added milk or cream to this soup...now I prefer it as is.
Since the weatherman has promised us two days without precipitation, we are taking a quick end-of-the-summer camping trip with Emme and Spencer. The RV is packed...and we're ready to go. We loaded the girls bikes and Ryder came with his trike...saying, "Me too! Me too!" He sobbed his little heart out...and has no understanding why he can't go along. I think Grammy would be willing to take him...but his sisters would not be too thrilled. Maybe next time, Ryder!

Have a good weekend...