Peru is the third largest South American country..and can hardly be seen in one week.  But we did our best...with the help of Lima Tours! 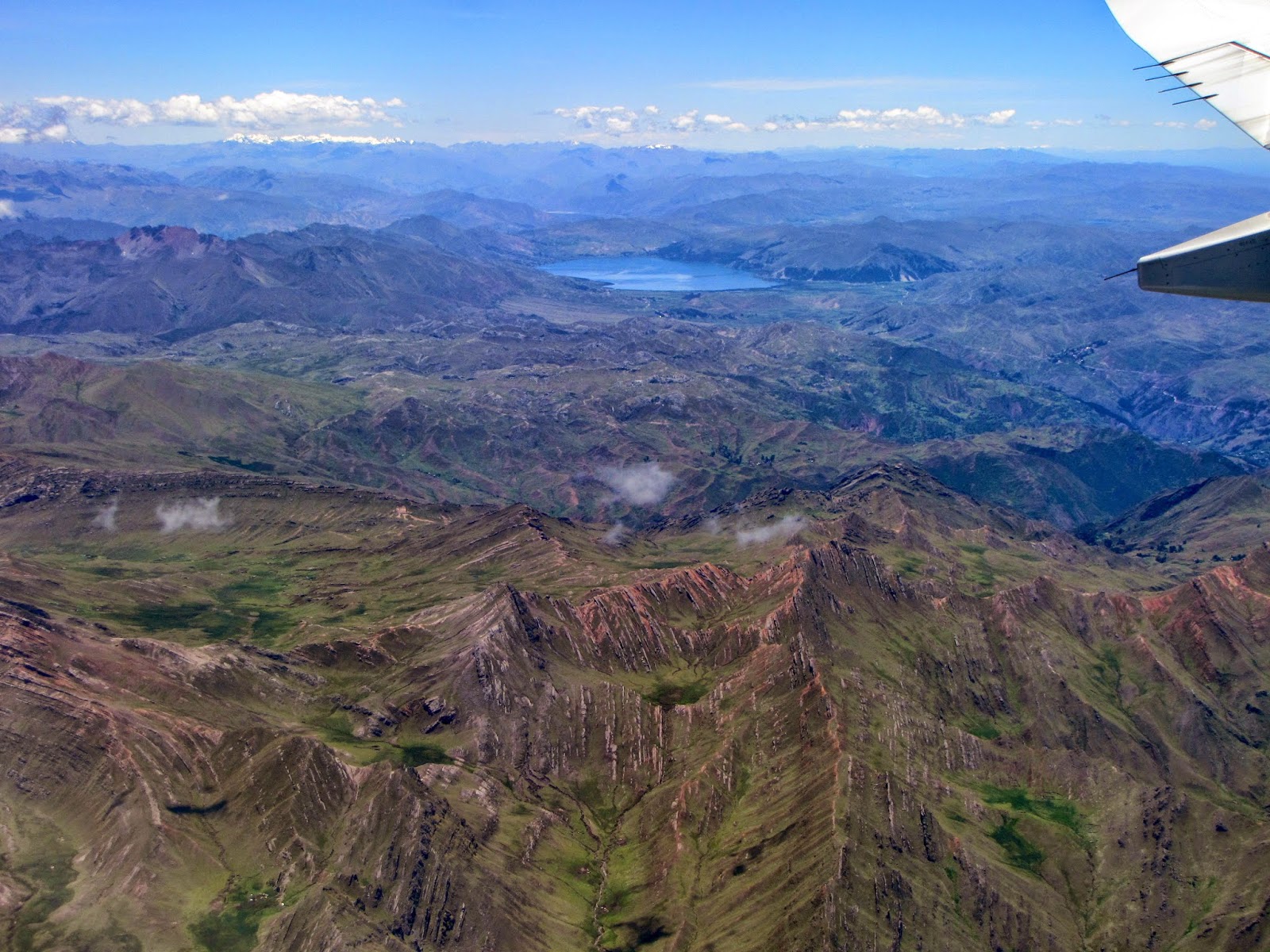 We flew over the Andes from Santiago...and arrived in the hub city of Lima towards evening. There was no time for sight-seeing in the city...as we were catching another plane bound for Cusco early the next morning.  Arriving in Cusco...we immediately noticed that we were about 12,000 feet higher than we had been in Lima. Thankfully...it passed quickly for us. It was Carnival time in Peru...and everywhere we went the people were dancing and celebrating.  It was hard not to get caught in the cross-fire of shaving cream  and water balloon wars.

The Peruvian folk are just lovely...and many still wear their traditional clothing. Let me share photos of a few of the people we met while out and about. 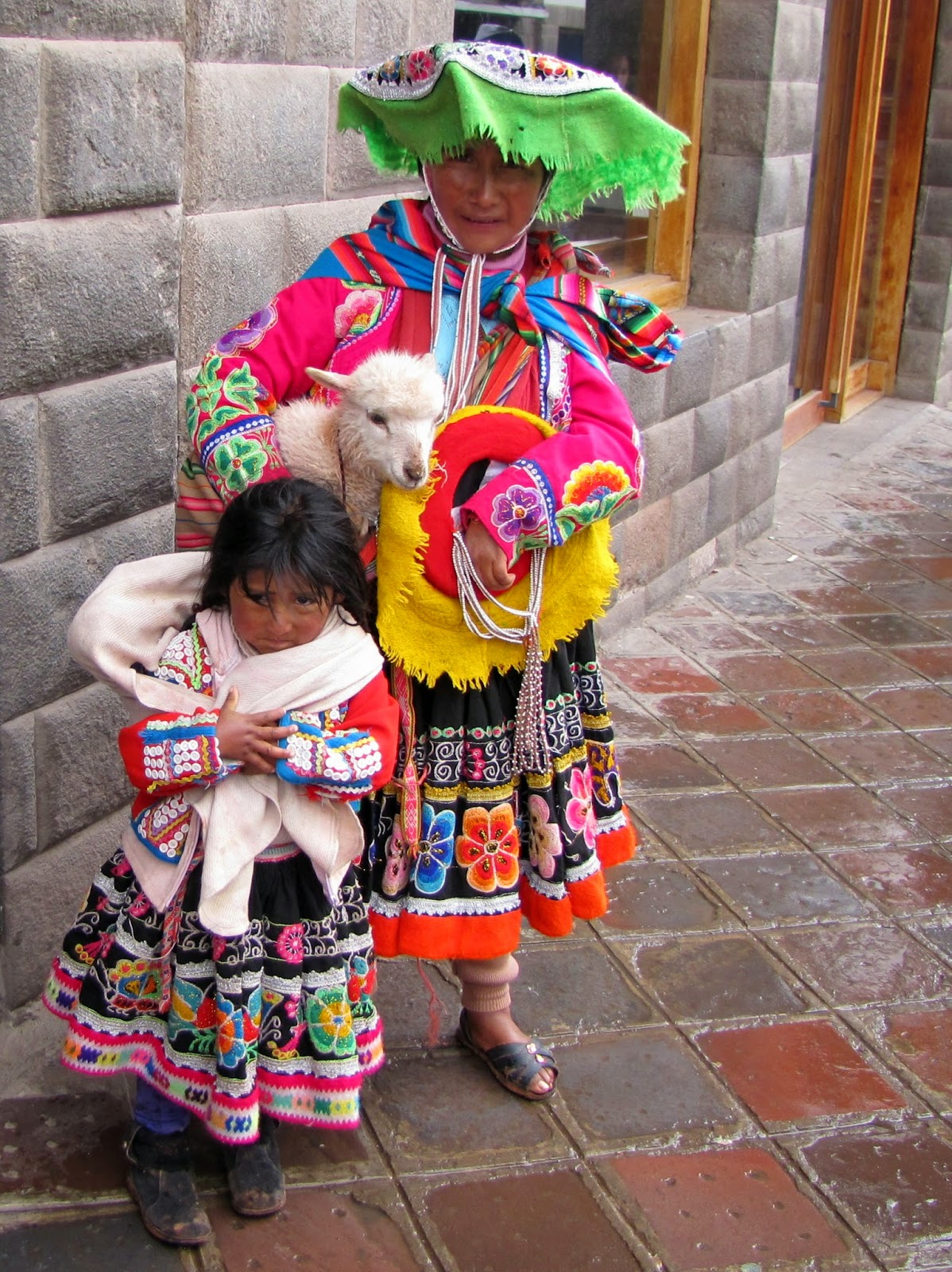 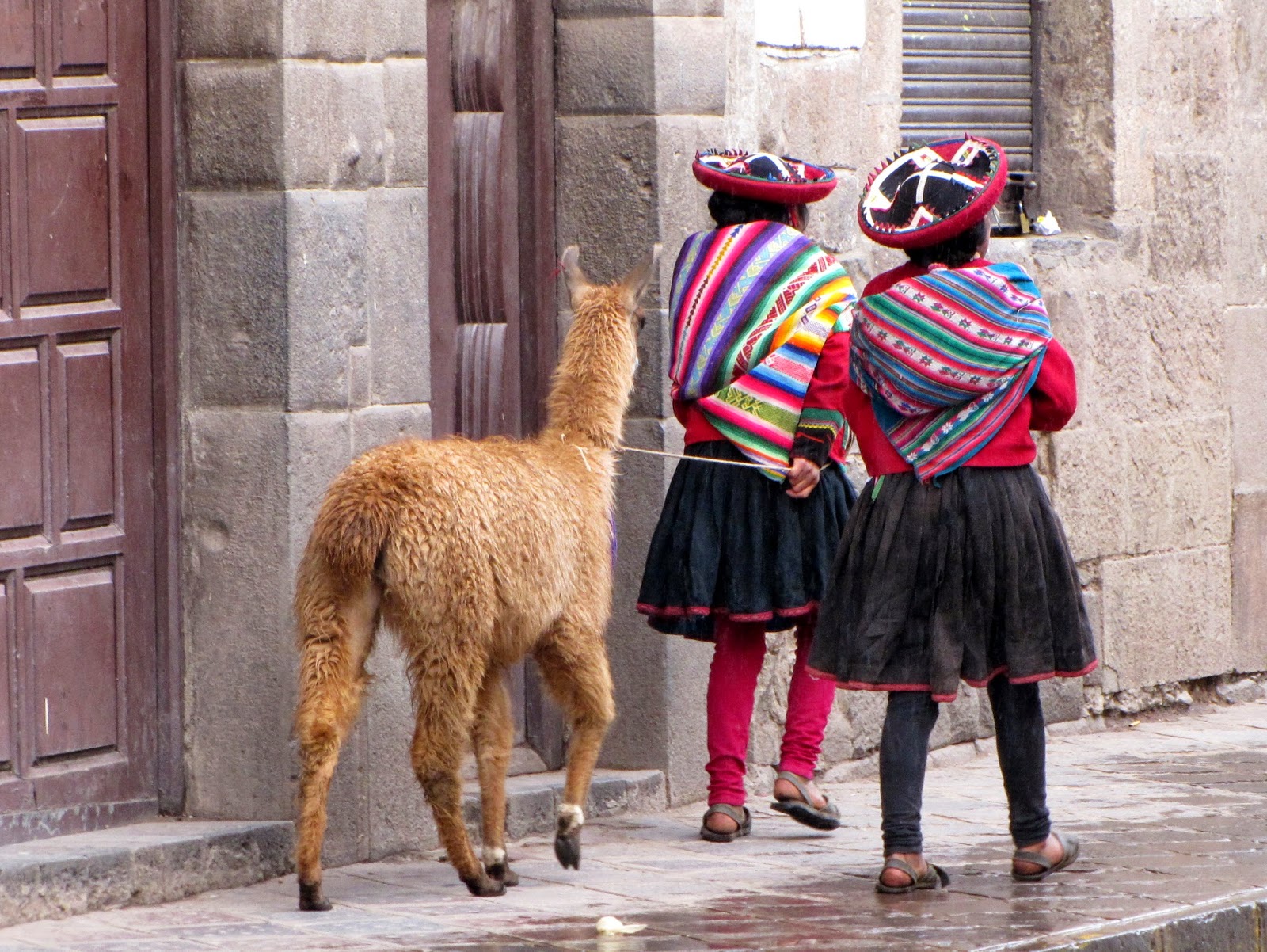 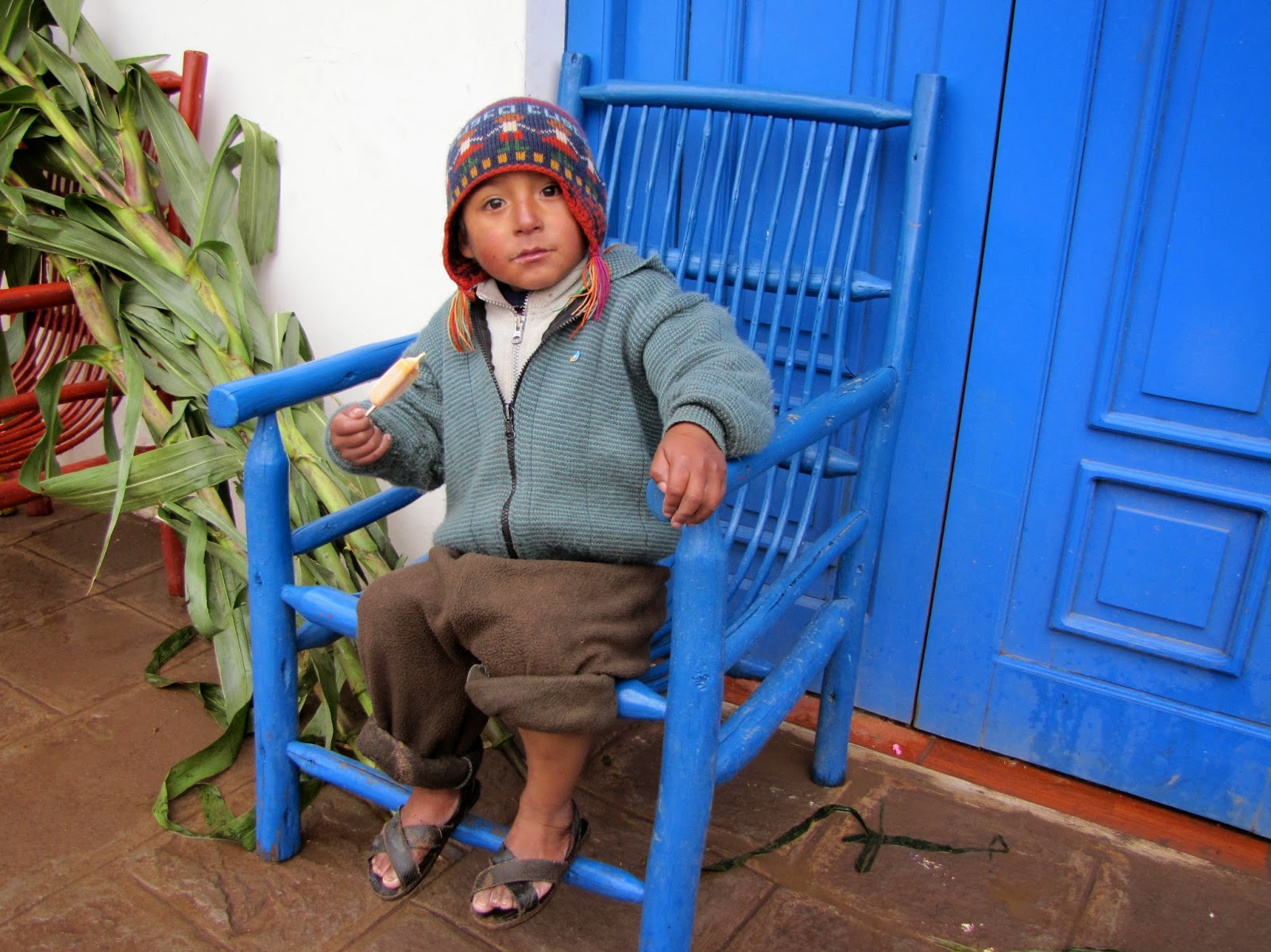 And frozen treats on a cool, drizzly day! Isn't he just the sweetest little guy? 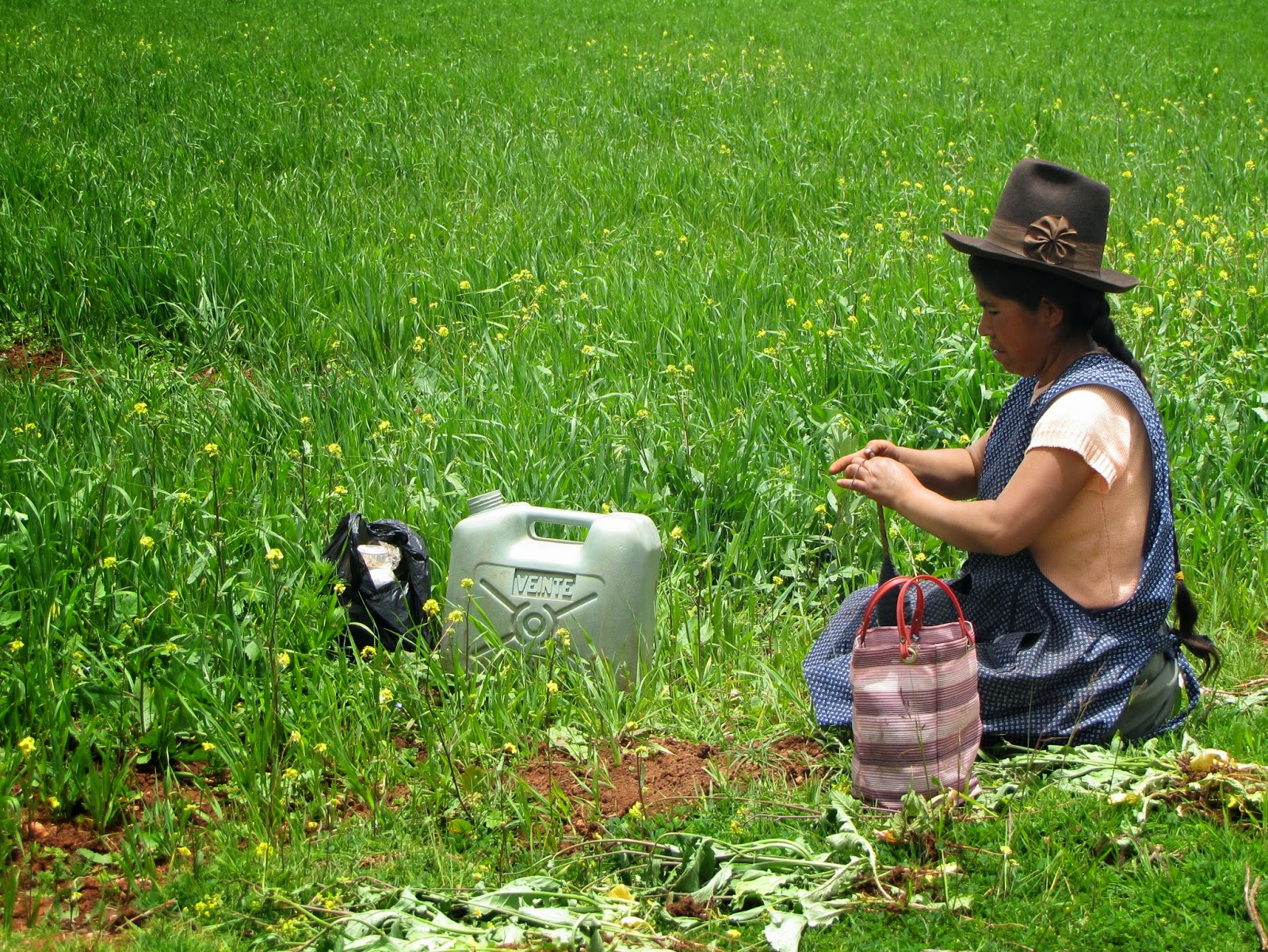 The women are never idle... 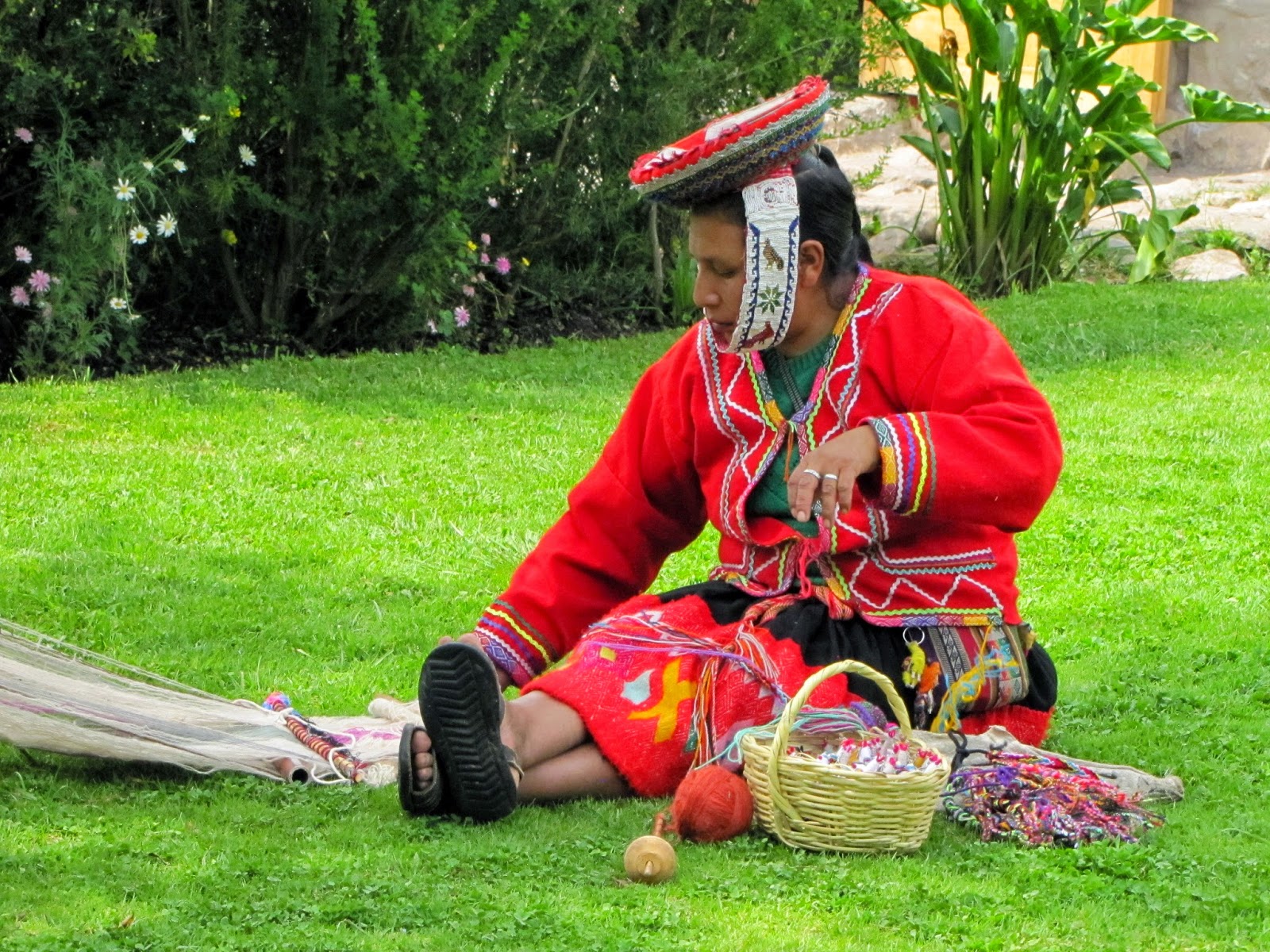 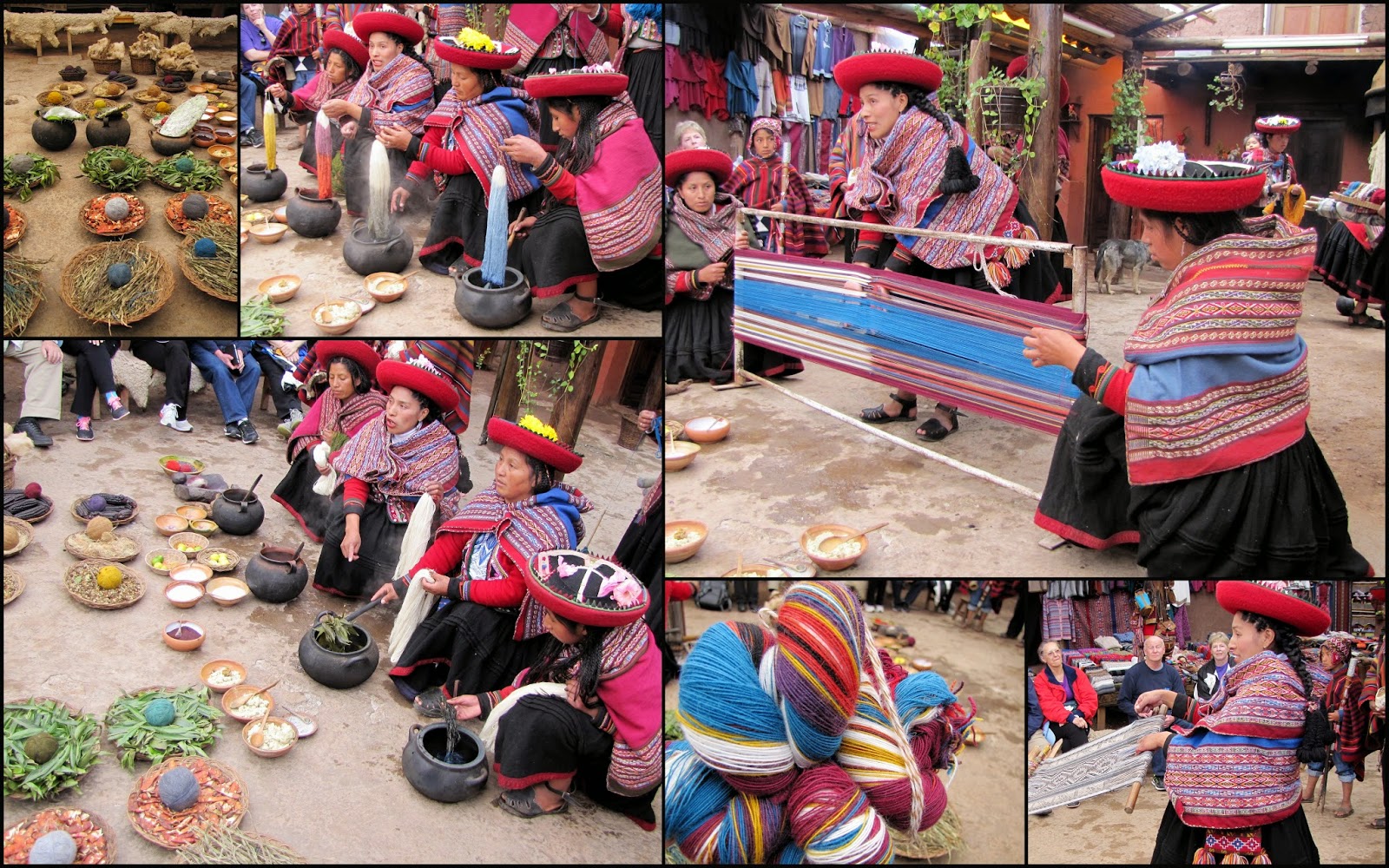 We took in a demonstration at a weaving co-operative high in the Andes...where the people live and work as they have for centuries. We watched how they spun, dyed and wove the alpaca yarn.  And some of us left with beautiful keepsakes! 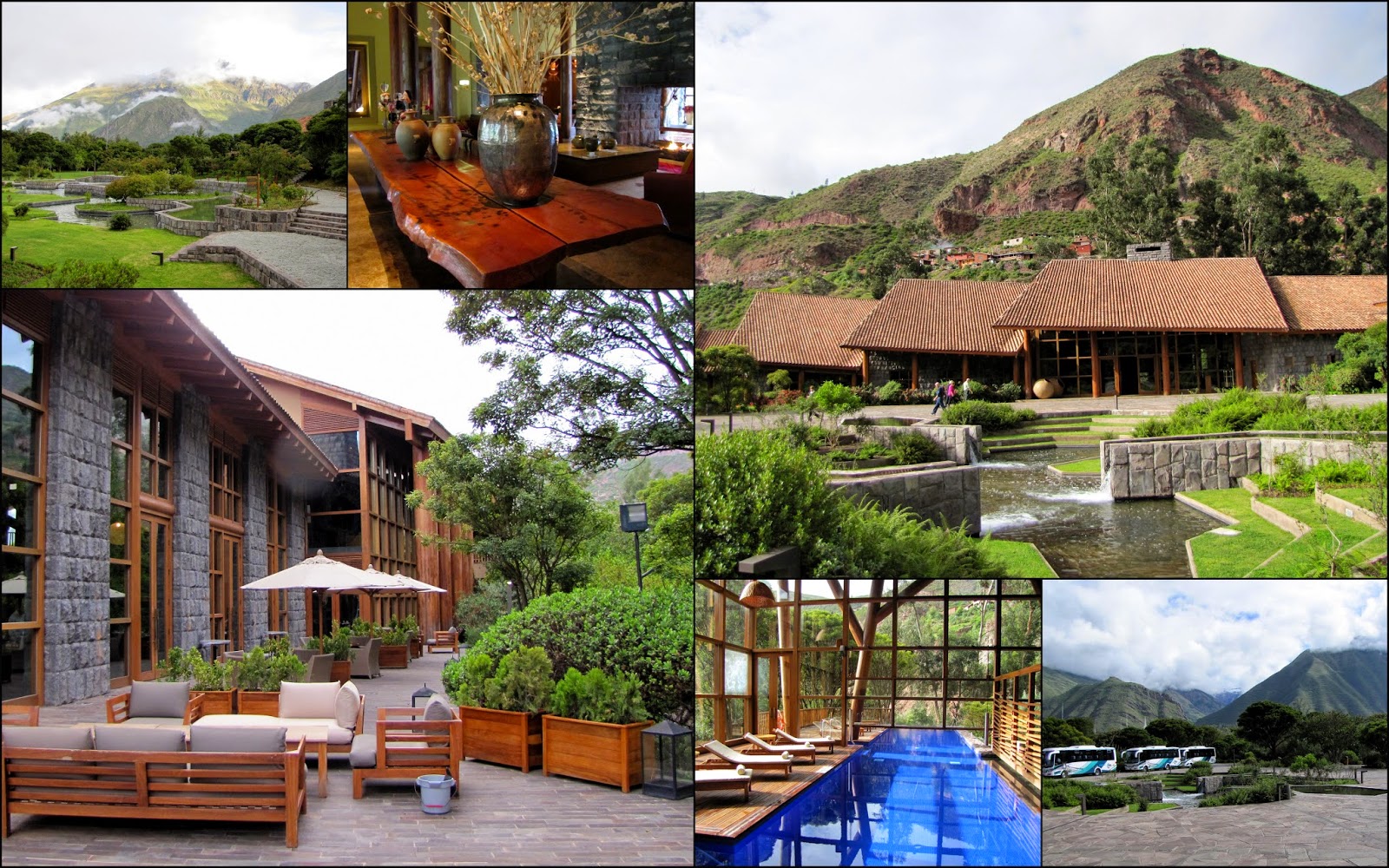 We spent two nights at a most lovely resort in the Sacred Valley...Tambo del Inka Resort.  We had no idea what to expect and were most pleasantly surprised.  It is one of the nicest places I have ever stayed at! 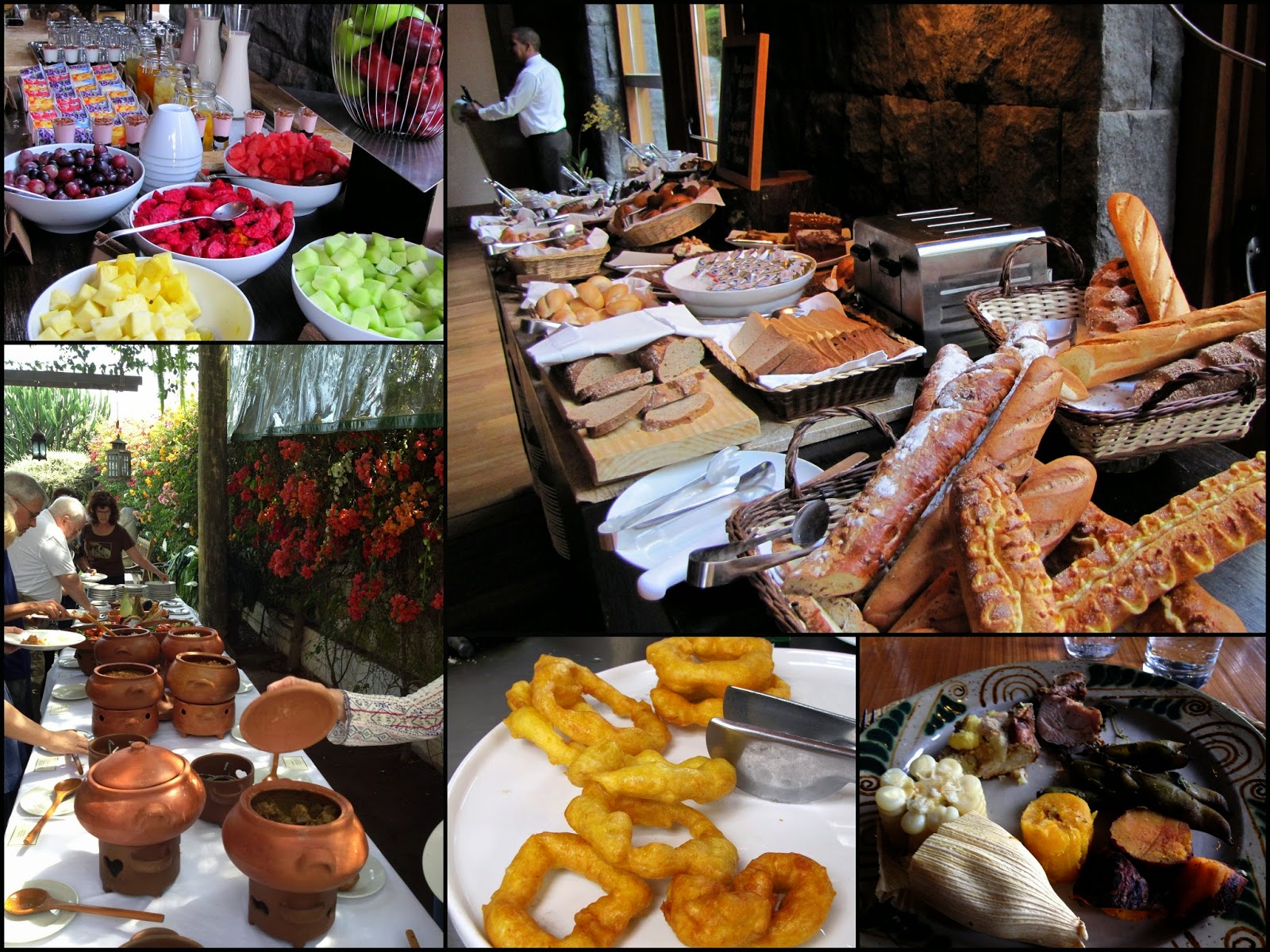 The Peruvian foods were great...all those that I tried!  The tasty little sweet potato donuts were exceptional.  I have to admit...I wasn't too brave when it came to taste-testing their favorite meat dish, however. 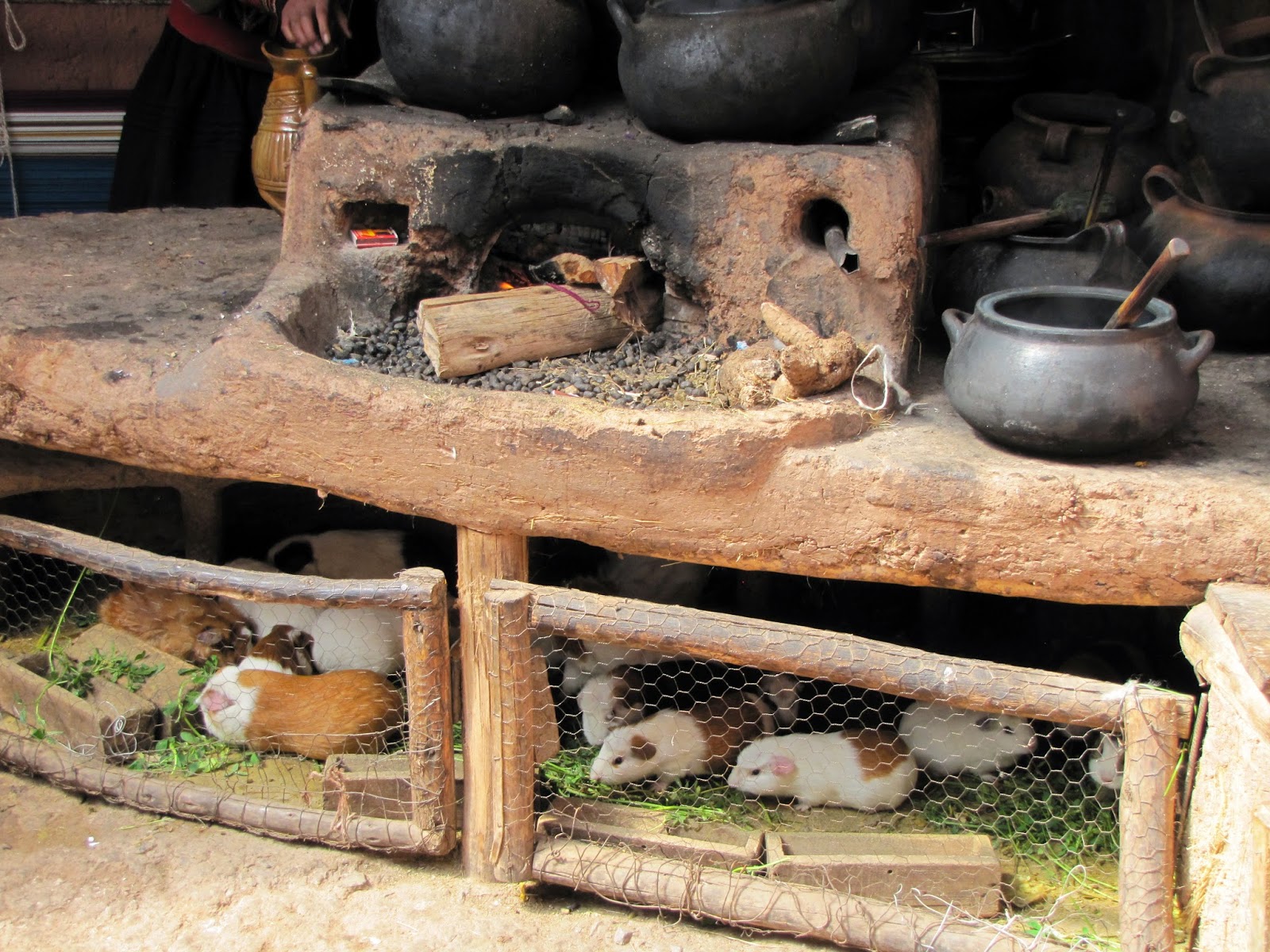 Wherever we went...we saw cages of guinea pigs beneath the clay ovens.  And they weren't there as the family pets.  They show up on the dinner plates of the Andean people on a regular basis. 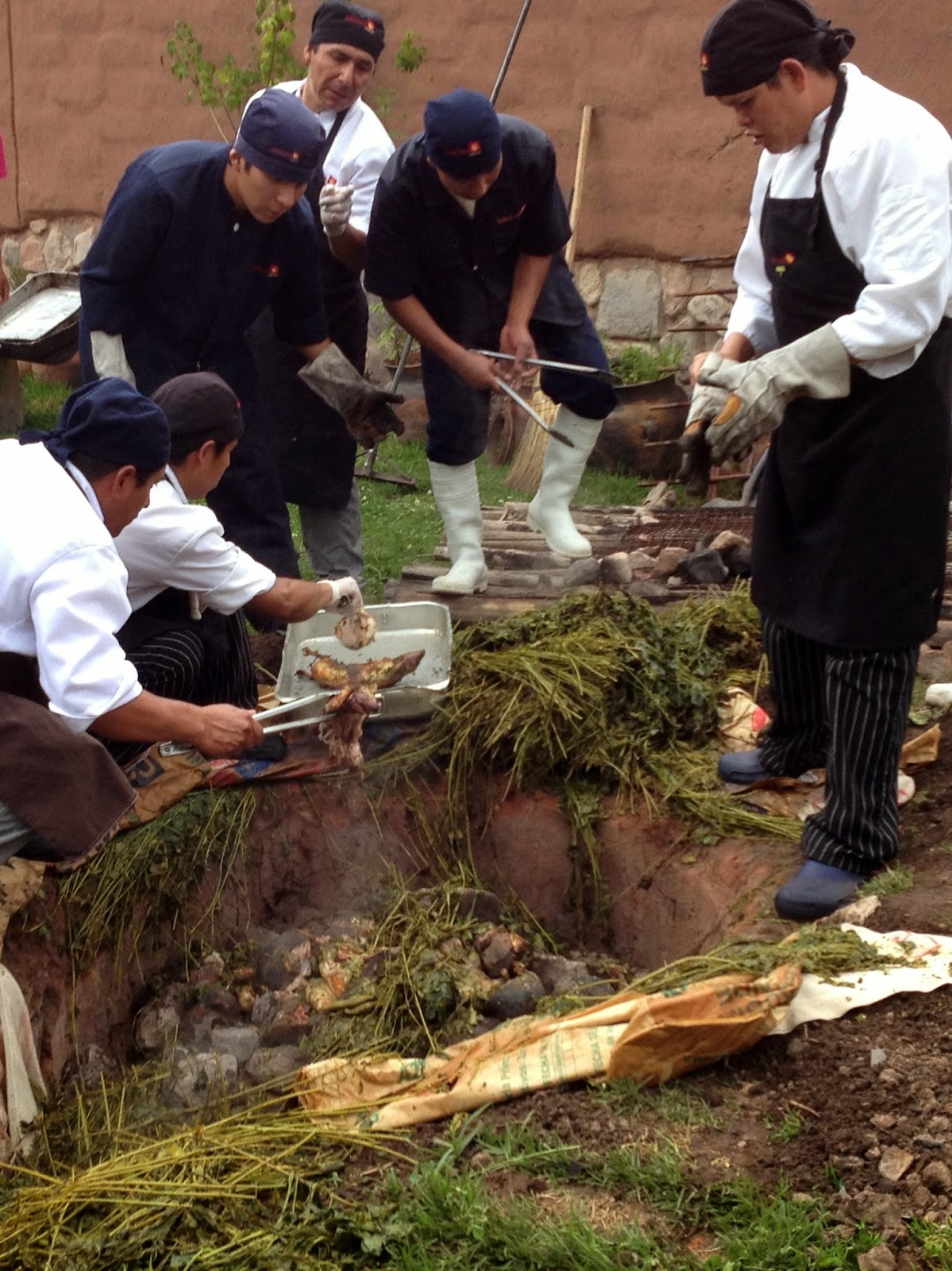 We enjoyed a wonderful Pachamanca lunch one day...where all the vegetables and meats are cooked in an earthen pit. After watching the guinea pigs being lifted out of the pit and onto the trays...I became a vegetarian quite quickly.  The rest of the meal was fabulous!  Who knew potatoes could taste so good? 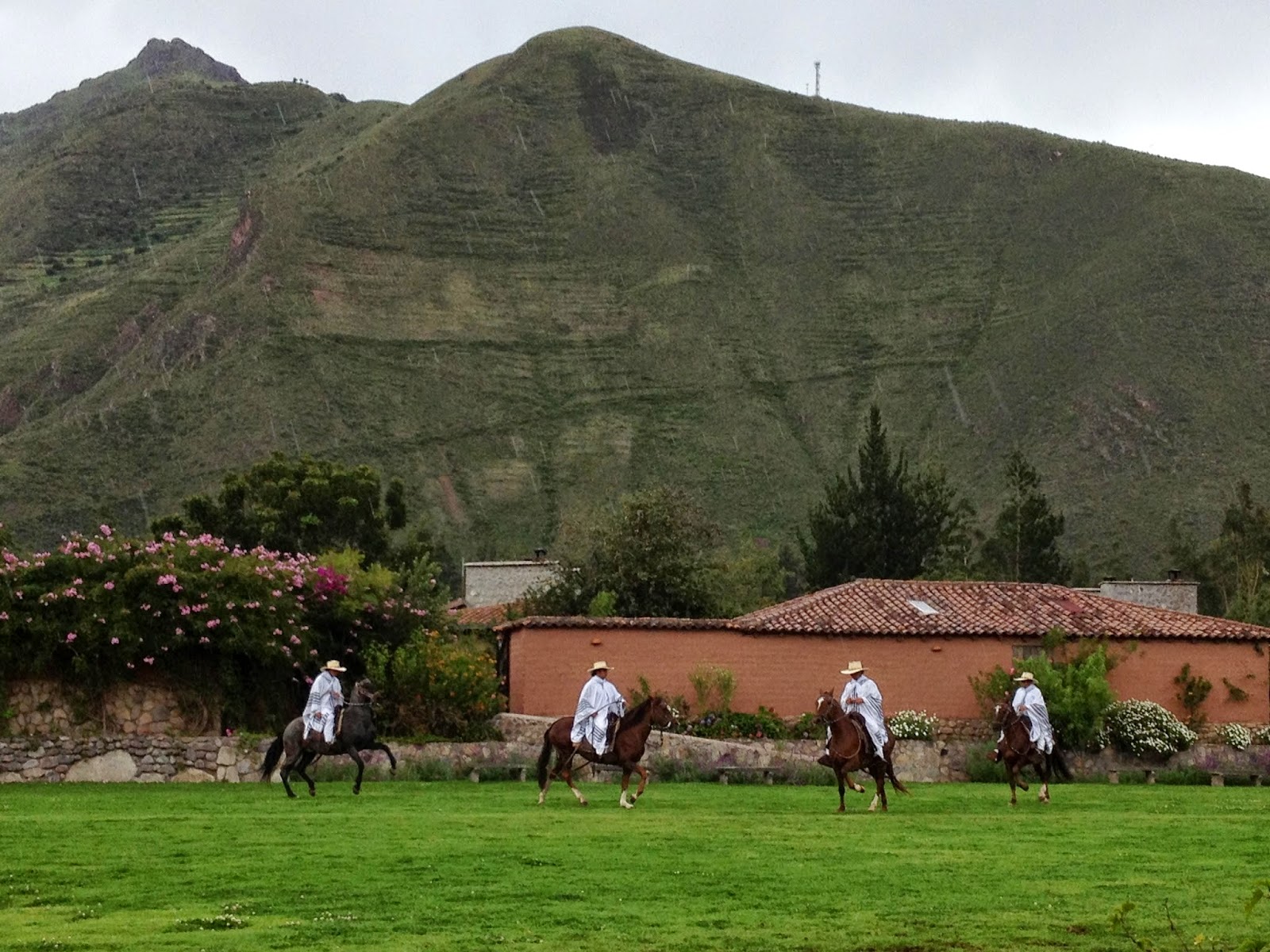 And while we finished up our meal on a lovely patio...we watched a Peruvian Paso horse demonstration. 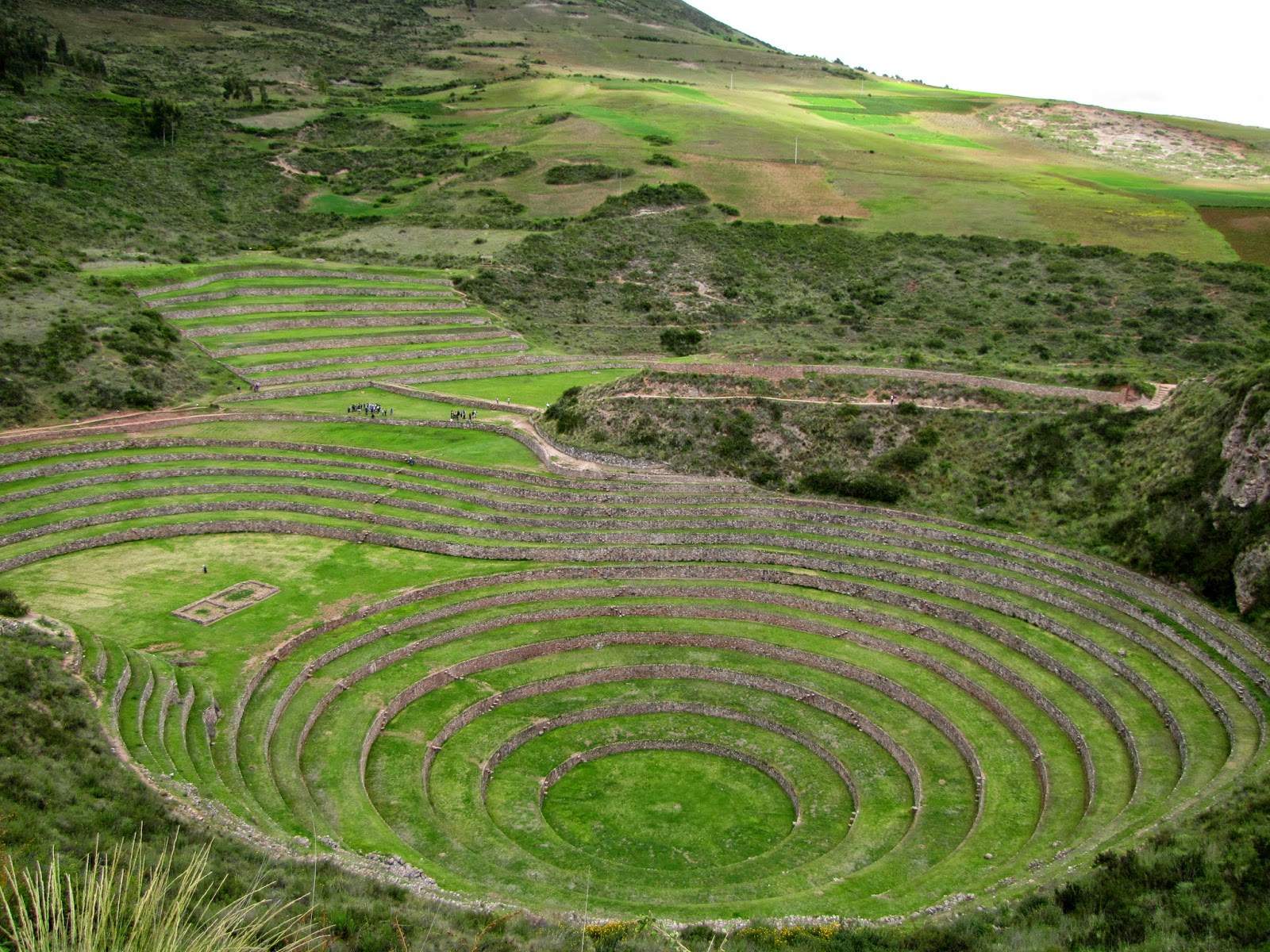 In Moray...we visited the agricultural 'experimental station' of the Incas...four amphitheatres of concentric circular stones with a sophisticated irrigation system. 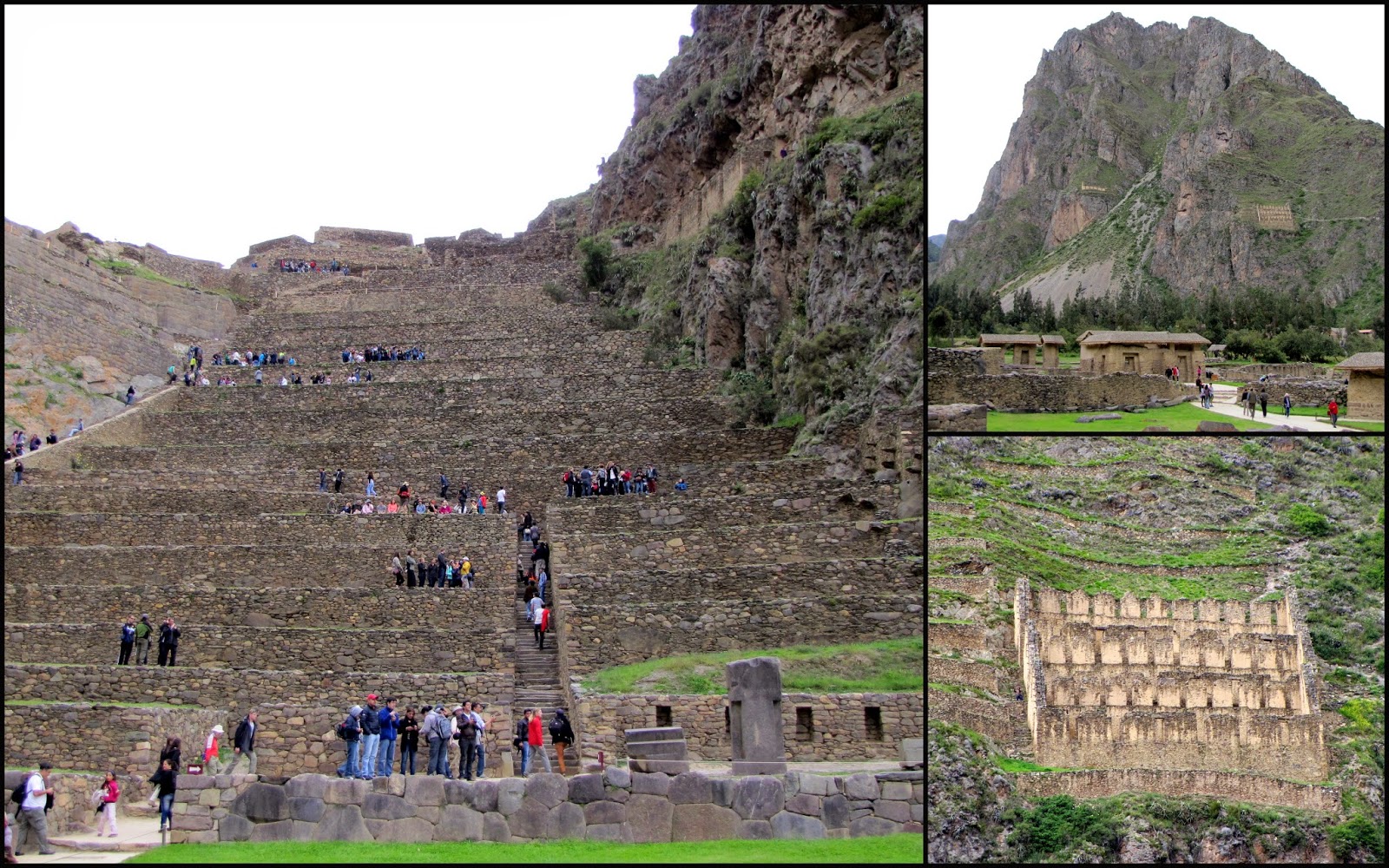 Ollantaytambo was once a stronghold of Inca resistance to Spanish colonization and has been remarkably well-preserved.  Many travellers pass through on their way to Machu Picchu...since it marks the beginning of the Inca Trail...but it is definitely worth spending some time here. The town itself is the best remaining example of Inca town planning. 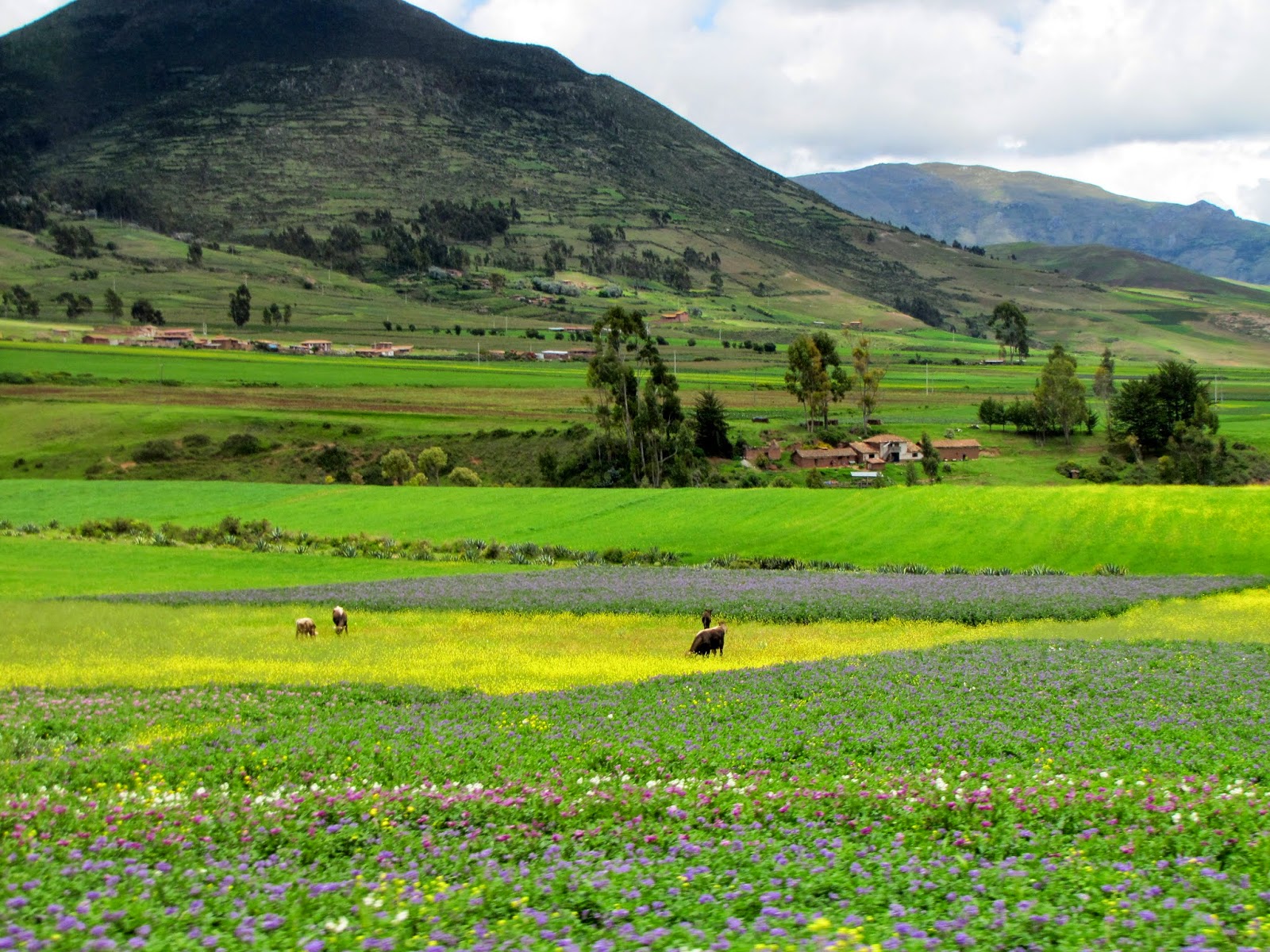 One of the most beautiful things about driving through the Peruvian Andes is the spectacular 'patchwork landscape'...created by the many different crops grown throughout its valleys and terraced hills. Corn and potato crops were easy enough to pick out.  Others we weren't quite sure. 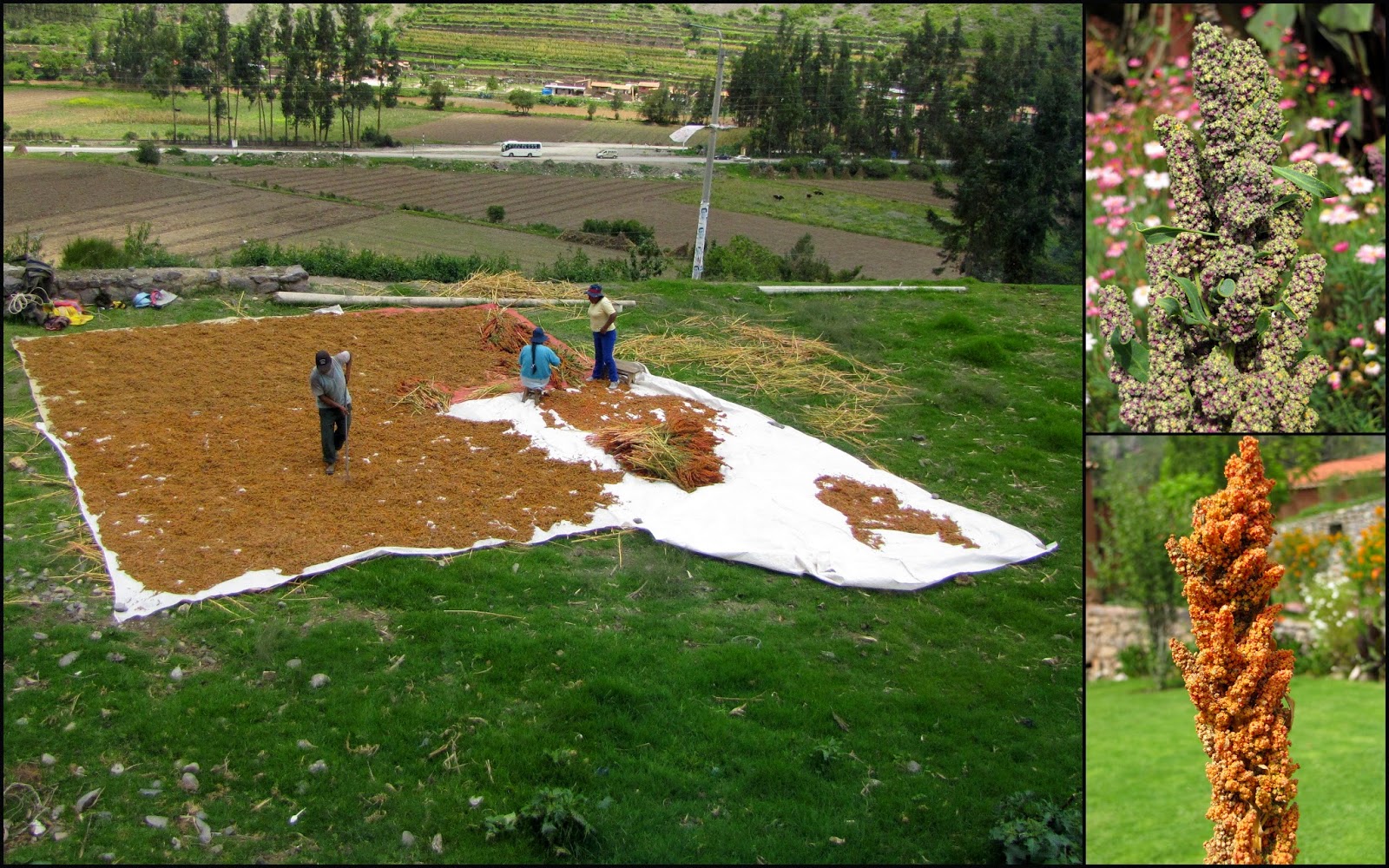 We finally figured out that this was quinoa...with many of the fields being harvested.  It looked rather labour intensive!  Not too many years ago...I had never even heard of quinoa.  It has been grown in the Andes forever...just like corn and potatoes.  But when the European explorers first arrived in South America...they loved potatoes and corn...but had no use for quinoa (rather like my hubby).  Potatoes and corn were introduced to the rest of the world...while quinoa remained undiscovered in the Andes.  Until several years ago!  It has now turned into a profitable export crop for the farmers of the Andes. 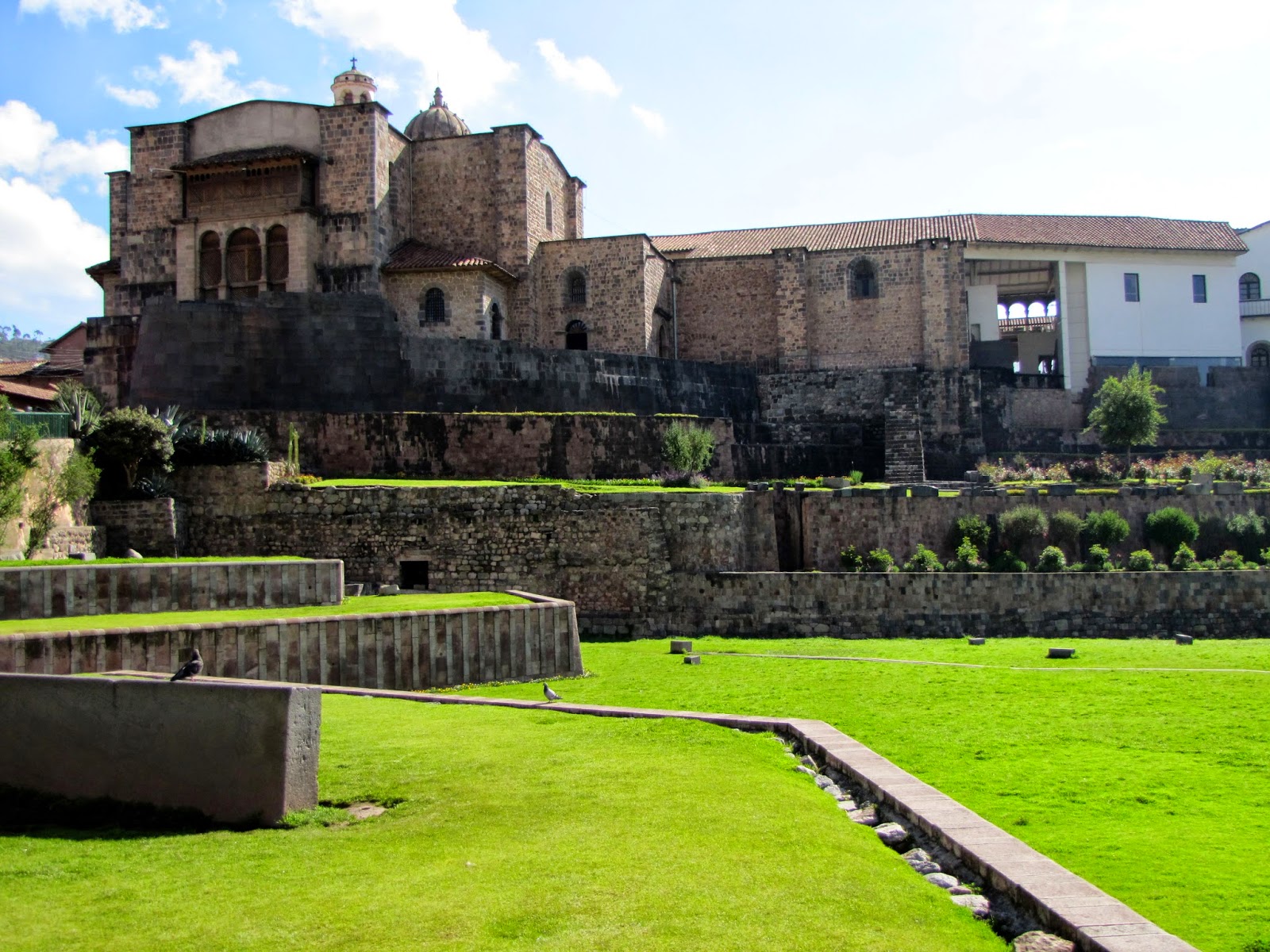 We spent one night in Cusco...right next to the Temple of the Sun at Koriancha....which was the most important temple of the Inca Empire.  The Spanish colonists demolished much of the original temple and built the church of Santo Domingo on the foundations. Much of the church has been severely damaged by earthquakes over the years...but the original Inca-built portions are still standing. 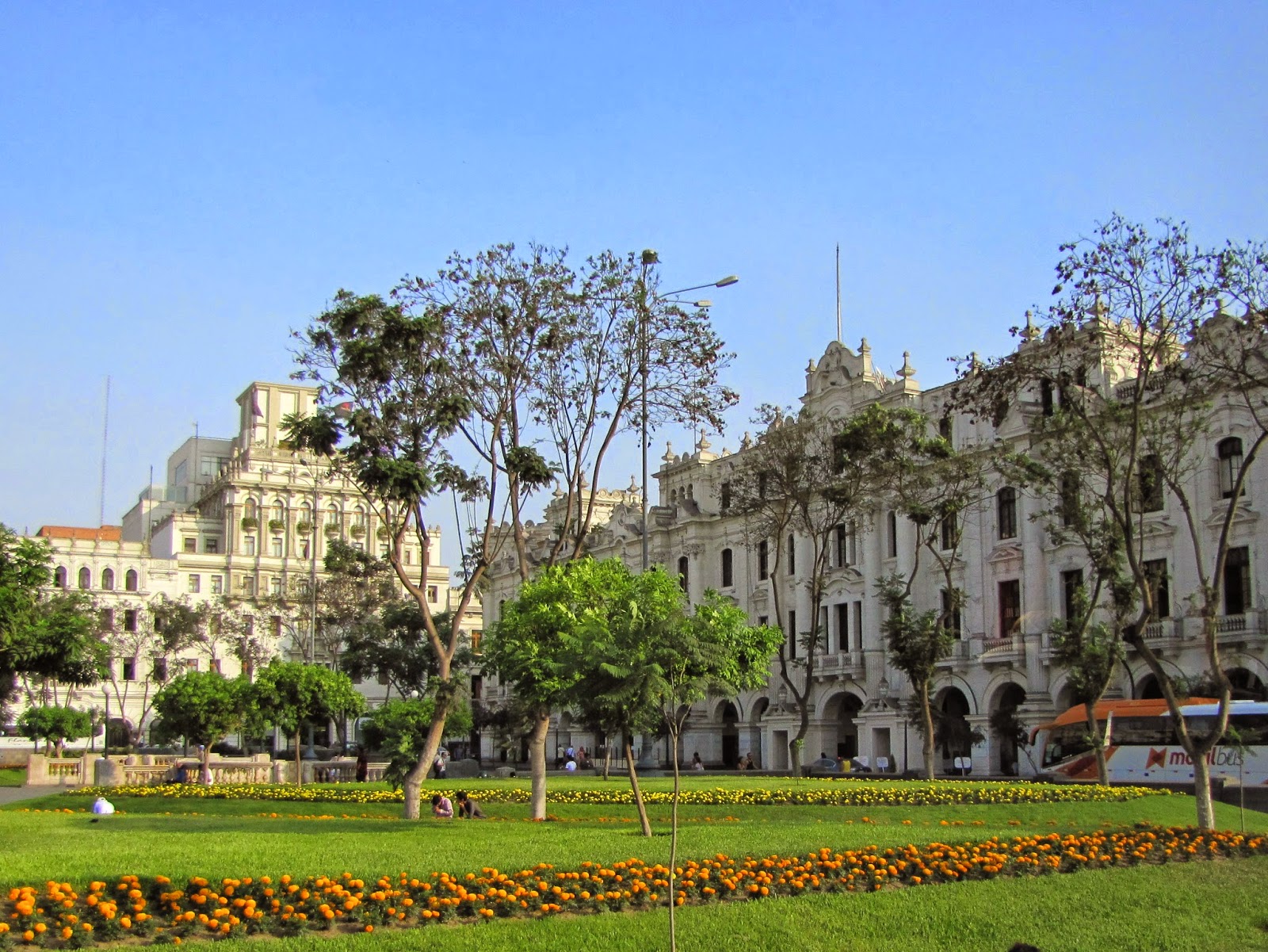 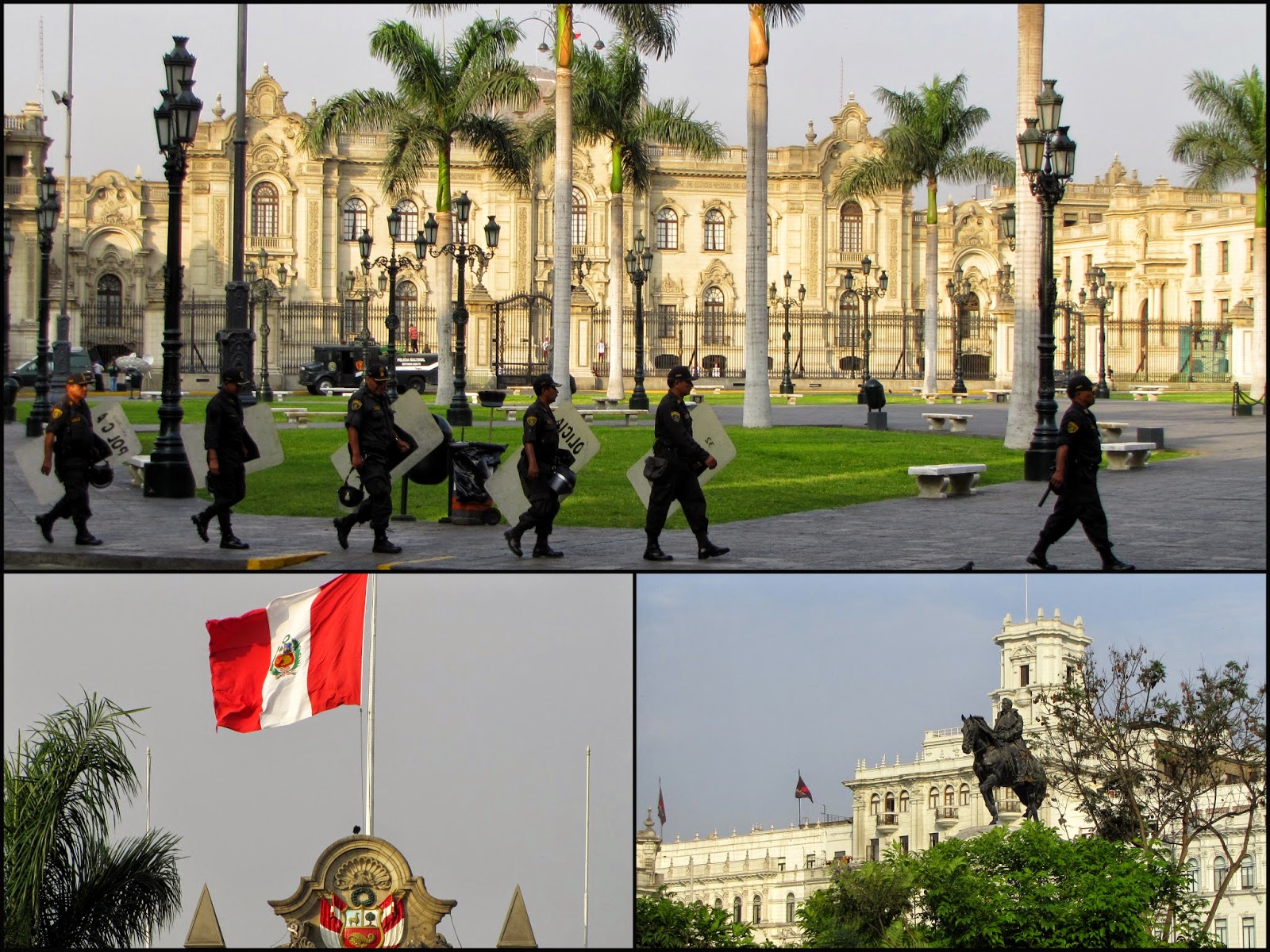 We arrived at the main city square to find it all cordoned off...with heavy security everywhere.  It seemed an important government meeting was about to take place.  The buildings around the square were quite amazing...featuring baroque and renaissance architecture and beautiful carved balconies. 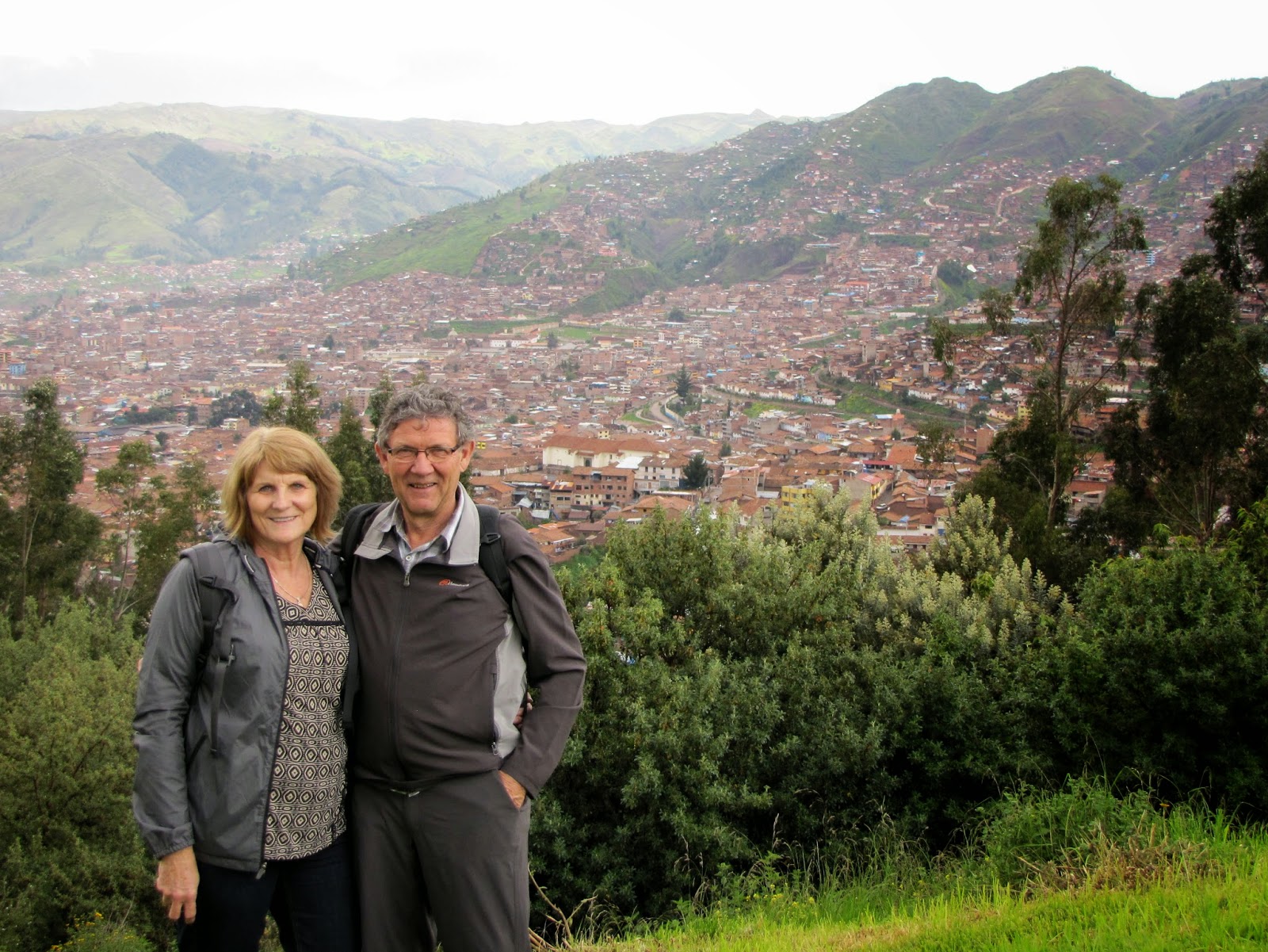 So there you have it.  A bit of this and that...a peek through my lens into the country of Peru.

I am finally done editing all my photos...and have enjoyed blogging throughout the process.  I might just do one more post sometime...including a few stories about the people we met along the way...and some of those memorable experiences.  The ones that made us laugh...or cry (almost).  Thanks for joining me on my travels!