Welcome to Day 3 of 'Let's Take a Trip'! We are having great fun traveling to interesting places at home and abroad this week. If you are interested in being a tour guide...simply do a travel post and send me the link (by e-mail or as a comment). I will display all travel links at the bottom of my post every day. Enjoy the tour! 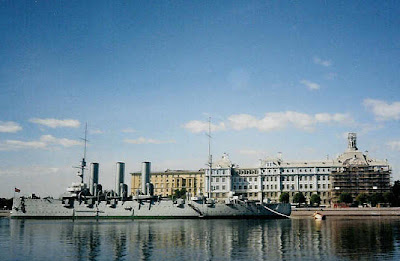 We were on a trip to visit friends in Finland, and (since we were so close) decided to do a three-day cruise to the port of St. Petersburg. I was a little leery about visiting Russia, but thought a tour with a cruise ship would be the safe way to go. We ate and slept on the ship...and all shore excursions were in the company of a tour guide.

It was a most interesting experience from the moment we arrived in port...stern-faced officials seemed to be everywhere, but a shore-side band stood at the end of the pier playing a familiar American anthem. 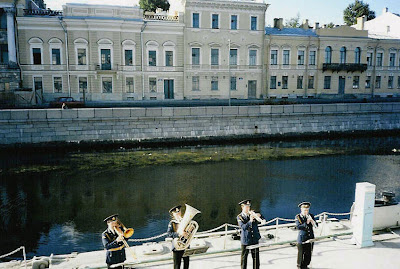 St. Petersburg is a city of canals...and was built by Peter the Great in 1703. 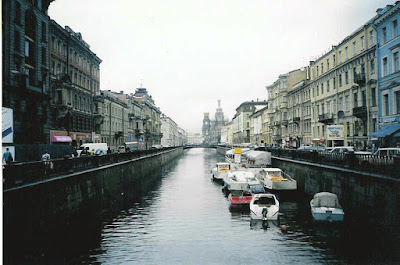 It is situated on the Neva River, and much of the traffic through the city moves along the water. St. Petersburg was the capital of Czarist Russia from 1712- 1914 and remains the cultural capital even today. It is like a living museum...and has magnificent palaces and cathedrals that are a reminder of it's imperial history.

We toured the city by coach...visiting many of the famous landmarks. 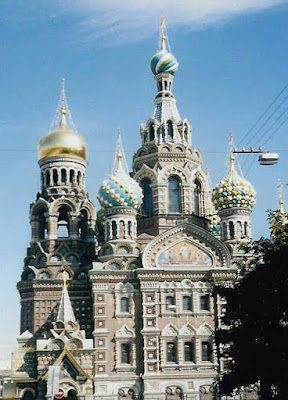 The Church of the Saviour on Spilled Blood is a Russian Orthodox cathedral built on the site where Emperor Alexander II was assassinated in 1881...funded primarily by members of the imperial family. Under communism all churches were used by the state for purposes other than worship...and this particular one functioned as a place to store food (hence, it was called the 'Church-of-the-Rotten-Potatoes'). This church contains more than 7500 meters of mosaics...more than any other church in the world. After 27 years of restoration, the building was re-opened to the public the summer that we were there...but is now a museum of mosaic rather than a place of worship. 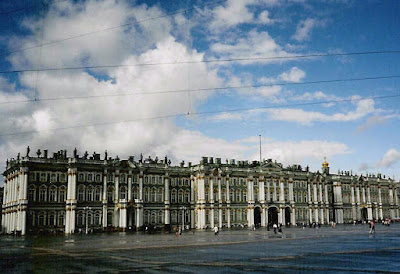 The Winter Palace was built between 1754 and 1762 as the winter residence of the Russian czars. Catherine the Great was it's first official resident and began acquiring works of art...that marked the beginning of the museum, which is now called The Hermitage. As part of the museum, many of the winter palace's 1057 rooms are open to the public...and what amazed us as we toured this place was the lack of security surrounding the priceless treasures found here. 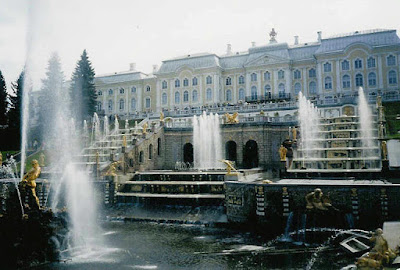 We visited the spectacular Imperial estate at Peterhof...often called the Summer Palace. It is nestled on the shore of the Gulf of Finland (part of the Baltic Sea), and was built by Peter the Great to rival the famous gardens and buildings of Versailles. Fountains, gardens, statues of gold...and opulence such as we could only have imagined. Despite all the damage during WWII, the building has been totally restored and is beautiful! What struck us as very odd, was that on the courtyard behind the palace was a group of about one hundred young people working at an assembly line, washing and drying dishes by hand. 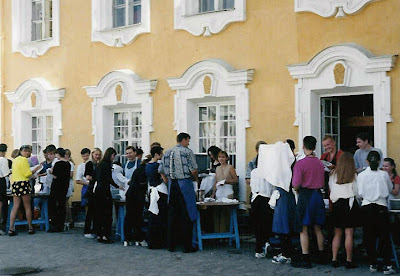 Tourists come from around the world...are served in the fine dining rooms and coffee shops...and the dishes are washed by hand! I'm afraid that would not pass food safety regulations in our country.
It was great to experience first-hand this wonderful piece of history that is St. Petersburg...the architecture and all the remnants of the past. But a city is made up of the people who live there and we so enjoyed seeing how they live and interacting with them. 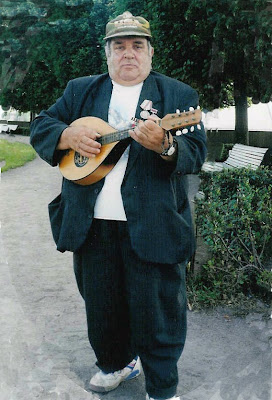 Our tour guides were amazing...and told us much about their life. We witnessed a wedding in a downtown park...and simply enjoyed watching the people. Their vehicles and machinery all looked old and out-dated...the common folk lived in grey concrete apartment buildings which left much to be desired. Other than the parks...there were few lawns or flower gardens. The presence of the military at every street corner was somehow less than re-assuring, but the people themselves seemed warm and welcoming.
My grandparents would never have imagined that I would one day be returning to the country that they once called home. In the 1920's they fled from Russia with little more than the clothes on their backs...hoping that they could make a new life for their families where they would be free to love and worship God. Visiting St. Petersburg was a chance of a lifetime...and I'm so glad we took it.

Next stop on your tour~