I awoke this morning to the smell of freshly cut hay...and rolled over to look out the window to this view! 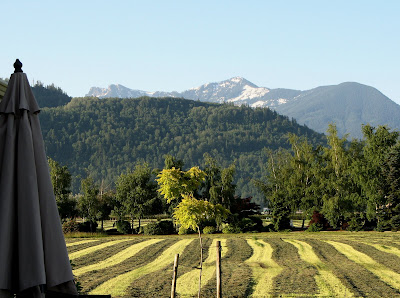 How good to be home...to have sunshine after a long grey and dreary spell..and to take in that sweet smell of grass. While we were off enjoying ourselves at the cabin over the weekend, Jeremy cut down all the second-crop grass fields...so today they will be busy chopping it all for silage.

We had a wonderful time at the cabin once again...it has been a family retreat of sorts for many years. It is located in the North Shuswap recreational area...right next to the provincial park at Scotch Creek. My parents bought the property as a vacation place for the family...and over the years we have enjoyed going there on many occasions. Two years ago, my sisters purchased the property...and so we can continue to enjoy visiting there on occasion.

Shortly after we arrived on Friday, we took a walk through the park. The sunshine we had been promised had not yet materialized...and the clouds hung low over the lake. 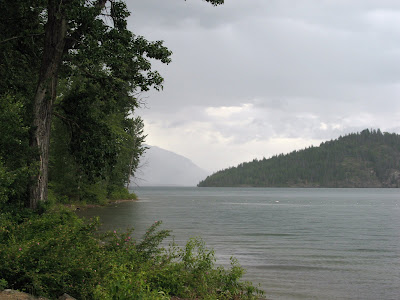 We had visions of walking along the shore, but we soon realized there was no beach! With all the rain and the spring run-off, the water levels in the lake were much higher than usual. 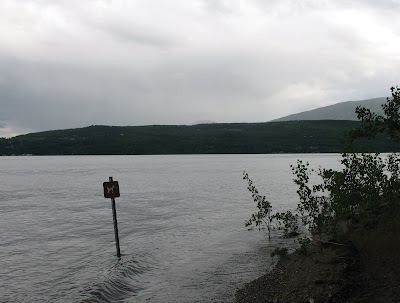 Not to worry, there would be no dogs running on the beach...although we did spot one playing in the water. We walked past many pine trees that looked rather sad... 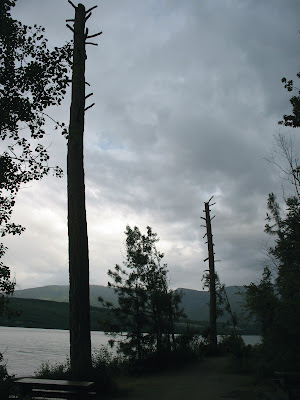 ...a result of devastation caused by the pine beetle. It has definitely left a mark on the forests of British Columbia. 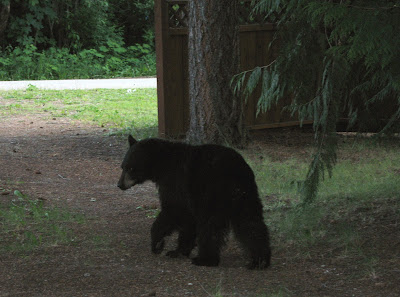 We had been warned that there was a young black bear on the loose in the park, but weren't really expecting a personal visit. While we ate supper outside on Saturday night, he came walking down the driveway and right past us...he rather looked like he was on a mission. I grabbed the camera and took lots of pictures as he rummaged through the fire pit and checked out the fence...only to realize later that the camera was on the wrong setting and there was no bear to be seen. Oh well...he came back briefly an hour later and I shot photos once more. As we ate breakfast yesterday morning, we spotted him once again.

The sun was out as promised on Saturday and Sunday. 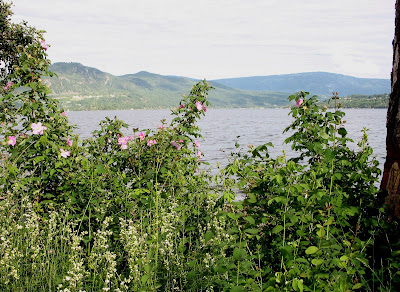 The entire park seemed to be in bloom...wild roses, daisies, honeysuckle and clover...and it smelled heavenly. We enjoyed time together...walking, talking and eating.

It was Father's Day...we listened to our father tell stories. Some of those stories we have heard many times, but yesterday I grabbed a pen a wrote a few things down for the record...little tidbits of family history that should be documented. Things like...My dad's great-uncle Cornelius was an advisor to the last tsar of Russia, and housed the personal library of Nicholas II in his home.

We went for a bike ride yesterday afternoon...on 'the cabin bikes'. All the family cast-off bikes have found their way to the cabin over the years...and still do the trick, for the most part. I stopped to photograph my favorite barn... 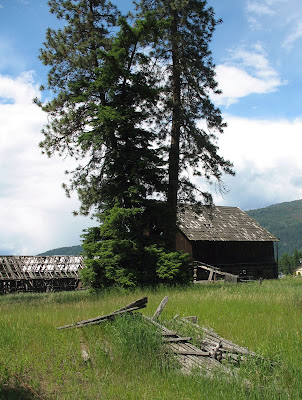 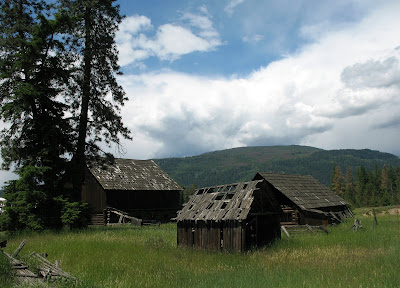 ...which I have photographed on many previous occasions. There's just something about those old buildings!
We left for home rather late...but had the most wonderful drive home. Driving the Coquihalla Pass on one of the longest days of the year under clear skies with a big yellow moon, was a very different experience than driving the Coquihalla on the shortest day of the year in a snowstorm! It was a wonderful drive...and as we neared home we could smell the fesh hay. We knew there was work to be done in the morning.
It was a good weekend...thanks for the invitation to join you at the cabin, Dot & Terry!