it's a small world...after all

I just have a wee story to tell today...that is just too uncanny to keep to myself.

A friend showed up at the door last night...he had some news to share. He had just returned from a trip to Israel, Turkey and Kyrgyzstan (part of the former Soviet Union)...where he was a part of a delegation of business men who work with different levels of government officials of various countries to open doors for Christian organizations to work there. His group had twenty-four different meetings scheduled...but in the country of Kyrgyzstan they travelled high into the mountains and met with some missionaries who are doing a wonderful work in that country. One of the Kyrgyz men happened to know five languages...and was acting as a translator for their group. He questioned our friend as to what part of Canada he might be from...and when he heard the name of our city, he said he had a cousin that lived there. It wasn't long before they connected all the dots...and my hubby was the 'cousin' he was referring to. Now this is one cousin we have never met...and that he would even know of us is amazing!

In 1924 my father-in-law left Russia together with his parents and siblings...they escaped with little besides the clothes on their back in hope of a better life in Canada. My father-in-law's oldest sister was newly married...and chose to stay behind in Russia with her new husband. He was a leader in the church...and lost his life under the communist regime. All contact with the sister was lost...and for decades they all wondered what had become of her. It turns out...she raised a family of four children on her own....and did a fine job of it. She has gone on to her reward...and all four of her children left the 'former Soviet Union' to make their home in Germany in the early nineties. One of their children chose to stay on...and do mission work in Kyrgyzstan. He has been involved in translating the Bible into the language of the people. This is the man who met our friend on the mountain trails near Mongolia last week. How amazing is that?

There are things in this life that are just totally unexplainable. But to the One who knows how many hair there are on my head... 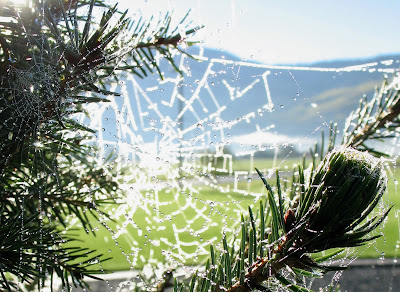 ...and who can make sense of the tangled webs of our lives...there are no mysteries!