Skipping.  It was what we did at recess...or lunch hour...on the playground.  We chanted skipping songs...and jumped to our hearts' delight.  And when we reached the end of the rhyme...we went into a skipping frenzy called 'pepper'.  That was the competitive part of the game...how long could you maintain that speed?  And then there were those who were quite good at skipping 'double dutch'...where one would jump two ropes while they were being turned simultaneously...like an egg beater.  I can't say I ever mastered that!  The skipping ropes of my memory were actually made of  rope.  And we wore dresses to skip...since we we were required to wear dresses to school back in the day.  Our hair flew free and our dresses got tangled in the rope on occasion.  It was all part of the game.

But skipping is a thing of the past, right?  Not so!

Skipping is serious sport these days.  And when they head off for a day of skipping... 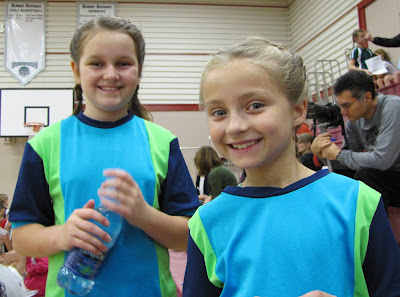 ...they are required to present themselves in team gear...and with hair in French braids.  And so it was that I rolled out of bed at the crack of dawn on Saturday...to see if I still knew how to do French braids. Soon Emme and her team mates were off to a competitive jump rope competition...with participating teams from our province and Washington State.
Last time I showed up when the skipping was all but done.  This time, I arrived bright and early...and got in on the action. 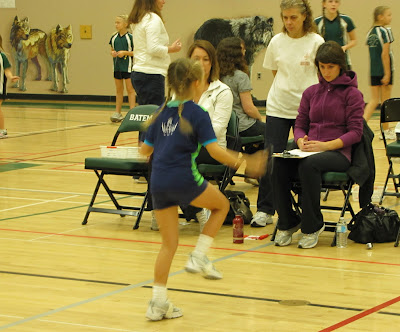 I won't bother posting a whole lot of photos of the actual skipping...since the rope, feet and hands are all a blur!   She is good...she is fast.  Let's just say...this is not how Grammy skipped!
As for the ropes...they are not made of sisal or plastic...but are stainless steel metal cables...capable of 5-6 rotations per second.  Oh...and they cause welts on bare legs.
I knew about 'double dutch'...but 'double under' was all new to me...where the participant jumps up a bit higher than usual while swinging the rope twice under her feet. It all happens so quickly...it took me awhile to figure out the rope was going around twice for every jump.
Emme and her team did well...and she came home with a fistful of ribbons. Next weekend they are off to another skipping event...in Washington State.
I was surprised to learn that Canada has 41 jump rope teams...with about 1400 athletes...and accounts for about 10% of the world-wide jump rope community.  No...skipping is not a thing of the past!