an adventure at rita's tea room...

I had no intentions of joining in the tea stories over at Gracious Hospitality this week...after all, I don't frequent tea rooms, so would have nothing to share. But as I was reading Vee's touching tea-room tale yesterday, I was reminded that I do have a tea room story of my own.
A few years back, we took a vacation on Canada's east coast. Let's just say it was a whirlwind vacation...because there is so much more to see than we could possibly cover in ten days. But as we planned our route, I discovered that we would be passing right by Rita MacNeil's Tea Room. 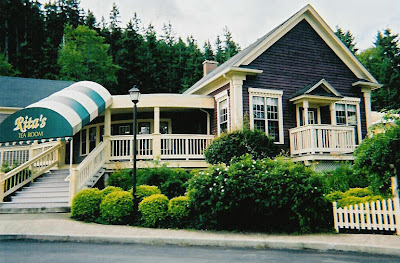 We couldn't just pass by...since my hubby is one of Rita's biggest fans! He watches her Christmas special on CBC every year...and I think we have been to see her twice in concert. So we booked a bed and breakfast in Big Pond, and arrived just in time for afternoon tea at Rita's. Her tea room is a former one-room schoolhouse where Rita and her family once lived...and has become one of the top tourist attractions in Cape Breton Island.
I don't recall what we actually ate...and I'm sure I ordered coffee instead of tea...but what happened there that afternoon is something I will never forget.
We parked our rental car bearing Newfoundland license plates in the parking lot...and as we walked towards the entrance to the tea shoppe there was someone taking a photo of his wife just outside the door. Hubby offered that he would be the photographer and they could both be in the picture. And so he did......and here they are. 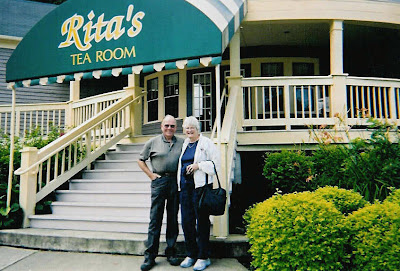 We got to chatting...they asked us where in Newfoundland we were from. We replied that we were from British Columbia...near Vancouver. The lady said, "We're from Kamloops, British Columbia. Isn't that a coincidence?" So we compared notes further, and realized she grew up in our community...on the Old Trans-Canada Highway, to be exact. Well so did my hubby! It turns out they were next door neighbours a very long time ago. Her mother had passed away when she was five years old...and she had spent a lot of time in my hubby's home, being cared for by his mother. He was just a kid at the time, and vaguely remembered her...but he knew his older sisters had been trying to locate her for years. We stood there in the parking lot and reminisced about years gone by...about the ups and downs of life...and about how incredible this was that we should meet here at Rita's Tea Room on the other side of the country. We exchanged addresses and phone numbers...and assured Marge that we would let hubby's sisters know that she was now found! They carried on their way...and we went in to experience Rita's tearoom.
How incredible is that? As it turned out, Marge and hubby's sisters got together shortly after that...they had not seen each other for almost fifty years. Shortly after they met, my sister-in-law, Anne, passed away with little warning. And who should we meet at the funeral...but the stranger that we found at Rita's tea room.
When I think of Rita's tearoom, I have little recollection of the menu...or the tea...or the ambiance, for that matter...I remember meeting a long lost neighbour on the other side of the world!
So if you are ever in Cape Breton Island, wanting a wonderful tea room experience, check out Rita's Tea Room...it's the best!

PS If you're not from Canada, here's a little info about Rita MacNeil. She got her big break singing at Expo 86 in Vancouver, and has gone on to international renown.
Posted by Judy at 6:50 AM