September 18th Update...
Karen completed the last of sixteen radiation treatments today....and has only missed four days of work during this time. She is grateful for the support of family, friends and those in her work place. Thanks for your continued prayers on her behalf.

August 20th Update...
Karen's radiation treatments (scheduled to begin around August 11th) have been postponed...are now slated to begin at the new cancer treatment centre in Abbotsford the last week of August. She is hoping to schedule the treatments for the afternoon and work mornings once the school year begins. She would like our prayers...for protection from the damaging effects of the radiation and also that she can sleep at night.

July 26th Update...
Our appointment with the radiation oncologist on July 10th was very positive. The doctor was a young woman with a focus on patient education - a good communicator. There's a longer wait list than usual for treatments because staff have been sent from the Surrey clinic to set up the new cancer center in Abbotsford to be opened on August 24th. The Surrey clinic called again this week with an appointment time for July 30th for the CT simulator test (specialized xray of the breast) in preparation for the radiation treatments. They estimate treatments to begin as early as August 11th. They will continue for sixteen week days, so I hopefully will be able to begin work on September 3rd or so. I was hoping to be available on September 2nd, the first day of school, but will have to be happy for a bit later than that. Apparently, the fatigue generally sets in during the third week and week after therapy.

Thanks again for your concern and prayer support. Karen


July 5th Update...
I finally heard again from the Surrey Cancer Clinic this week. My appointment with the radiation oncologist is set for July 10th. I’ll be assessed, then will be given a schedule for radiation therapy to begin two or three weeks afterwards. The therapy sessions will last from 3 to 5 weeks. There is also a possibility that I’ll be assigned to a study which involves two treatments a day for only one week. I am hoping to be back to work in September. I am also praying that Jack and I will be able to get away somewhere for a week before school starts. Karen

After much time spent waiting to see specialists and waiting for recommendations as to course of treatment...Karen has made the decision to proceed with radiation therapy. At this point in time, she is still waiting for her initial meeting with the radiation oncologist...so there is no treatment schedule in place as yet. Please keep her in your prayers...the waiting is very difficult and she is looking forward to a treatment schedule, so that she and Jack can make their plans for the summer.

I first met Karen nearly twenty years ago, when our daughters sang together in the Pacific Mennonite Children's Choir. We were both involved in carpooling to rehearsals and fundraising for the choir tours. A few years later, we worked together on a committee that helped organize the first dry-grad in our community. Soon our children were grown...but Karen and I became friends and have met for coffee on occasion throughout the ensuing years. 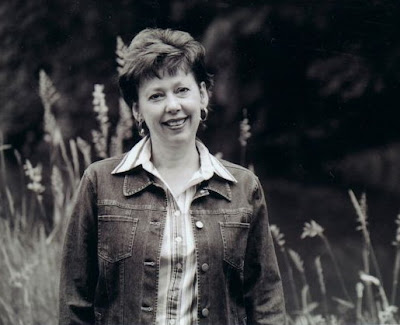 Karen raised her two wonderful children as a single parent, and last summer it was a thrill for me to be a part of her marriage to 'the man of her dreams'. She knew without a doubt that he was the one God had in mind for her. I was so happy for her...she now had someone to share life with!

It's been a busy year for them as they combined two households and disposed of Jack's home in another community...but before they could truly settle down, Karen discovered that she had breast cancer. At this point, she has undergone two surgeries...and is still awaiting word as to what her options are and what the implications of each type of treatment will be.

Karen was over yesterday morning and we spent a little time editing digital photos...we also chatted about life. She said it was OK to tell her story...and would appreciate your prayers on her behalf.

Remember her as she faces all these uncertainties in life...pray that the cancer can be conquered and that she will have peace as she continues to trust God each step of the way.

Email ThisBlogThis!Share to TwitterShare to FacebookShare to Pinterest
Labels: friends