A most memorable New Year's Eve...it was! 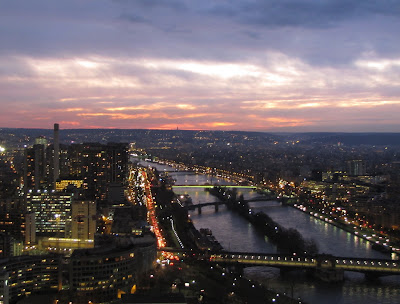 So how was it that we landed up in Paris en route to Kenya? When opportunity knocks...we open the door! Last summer we began to make plans for our trip Africa. We would be traveling with our long-time friends, Dave and Janet...with whom we have vacationed on many occasions over the years. It is Dave's brother and sister-in-law who we would be visiting in Kenya...and who were making all the arrangements for us, once we arrived. When it came time to book the flight, we asked the travel agent if there might be any possibility of spending a few days sight-seeing in Europe on our way down. There were no flights available at a reasonable price in the early New Year, but she suggested we fly out at the end of December and ring in the New Year in Paris. We thought that sounded like a great plan...and so that's how it came about that we spent five days touring Paris and several more in London, before we eventually arrived in Kenya.

Our Parisian hotel was in the perfect location...across the street from the metro station and right near the Eiffel Tower. 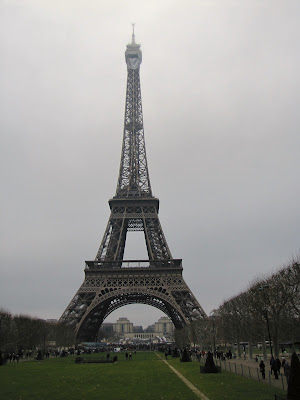 We spent December 31st touring Paris on the Hop-on/Hop-off bus...and opted for the upper deck with it's unobstructed views. Did I mention it was very cold in Paris...and our cold weather clothing was mostly back at home? We wore many layers...but were quite chilled to the bone by the time we hopped-off at Notre Dame Cathedral.  The eight dollar coffees seemed almost worth the price! 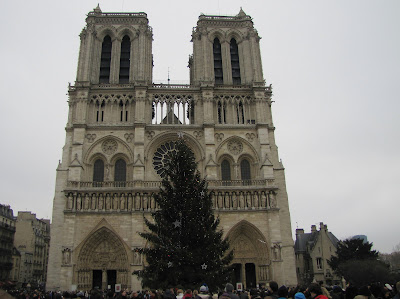 We toured Notre Dame Cathedral...now more than 700 years old and with bell towers that rise 200 feet into the sky. 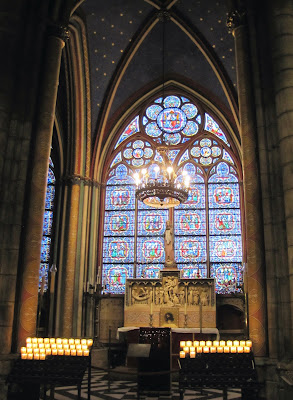 With it's beautiful stained glass windows, famous gargoyles and perfect location along the Seine...there's a good reason the Notre Dame is the most famous church in France. 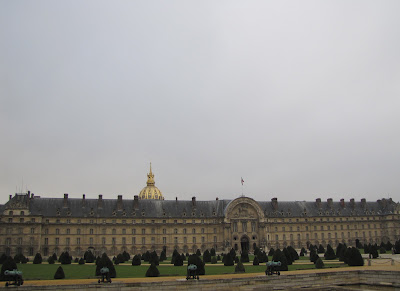 We passed by amazing old buildings...many which we toured later
(the Louvre, the Army Museum and the Rodin). 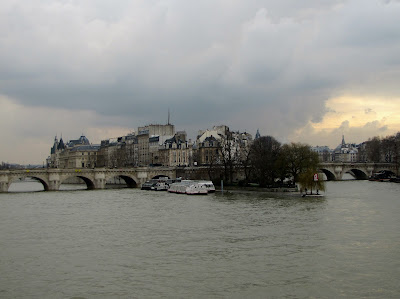 We crossed over the Seine River several times...most of our sightseeing took place within a few blocks of the river. 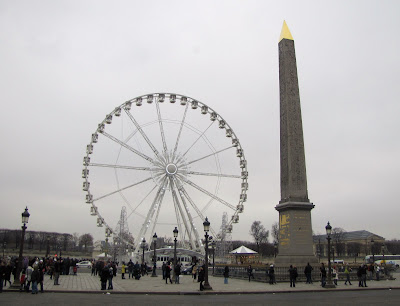 We 'hopped off' at the Place de la Concorde...the city's largest square and the place where thousands of victims (including Marie Antoinette) were beheaded by guillotine in 1792.  Amid the fountains, tourists and traffic stands a 3,300 year old obelisk...a gift from Egypt. 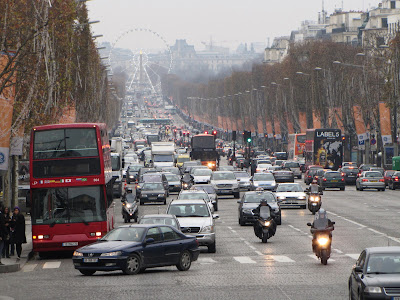 From there we carried on down Champs-Elysees...the greatest of the many grand 19th century boulevards on the right bank of the Seine River. 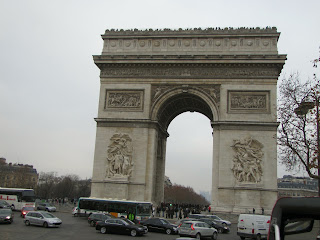 All roads seem to end at the Arch de Triumphe...the magnificent arch commissioned by Napoleon to commemorate his victory at the battle of Austerlitz.  Much of French history has played out at the base of this arch over the past two centuries.
As darkness descended, we made our way back to our hotel...from where we had a nice view of the Eiffel Tower light show every thirty minutes.  The tower is illuminated with 20,000 bulbs and four rotating floodlights at the top.  Rather spectacular! 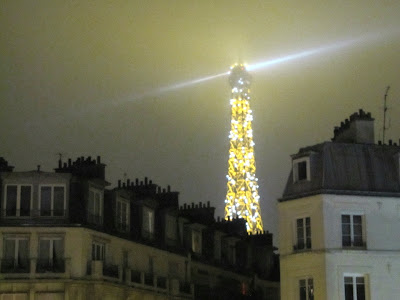 We had heard that the Eiffel Tower was the place to be in Paris on New Year's Eve.  Though we could see it quite nicely from our hotel window...we decided we should join the masses under the massive tower for the amazing fireworks that take place at midnight.  As we made our way there...we noticed a lot of  security personnel...and fully armed riot squad out and about...and hoped they would not be called into action.  The crowds waited patiently for the stroke of  midnight...but it came and went with no countdown...and NO fireworks.  Eventually we found someone nearby who spoke English and learned that the fireworks had been cancelled due to terrorist threats. Oh well...we had a good time, and can say we rang in the New Year under the Eiffel Tower.  And all that happened one month ago today...New Year's Eve in Paris!

It has been a month since there has been any action on ‘my front porch’...as  some of you may have noticed.  I’m back...home from our ‘trip of a lifetime’!  We visited three countries...but spent most of our time in Kenya. 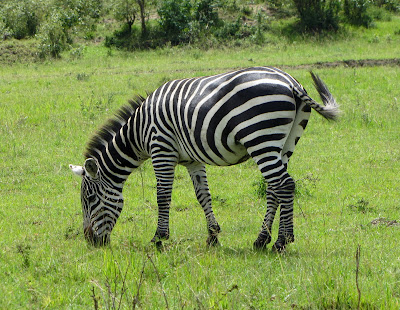 We saw lions, cheetahs, giraffes, zebras, elephants and hippos close up...and we saw a mamma rhino much closer than we wished to. 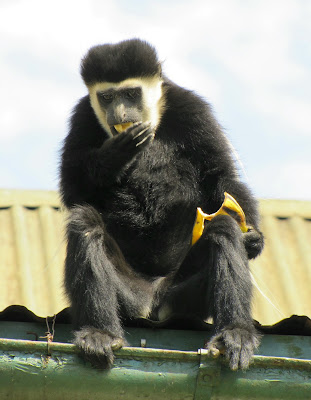 We had monkeys sitting on our patio and swinging from the branches nearby. We met the people where they were at...in the Masai village, in a school in the slums... 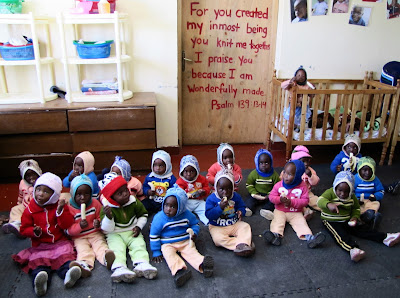 ...and in an orphanage.   We were privileged to have the best of hosts while in Kenya...our friends Ron and Martha, who oversee the work of MCC (Mennonite Central Committee) in Kenya.  We joined them in distributing blankets and school kits to children in the slums.  We visited the sand dams...an MCC project which provides water to many who previously had no access. 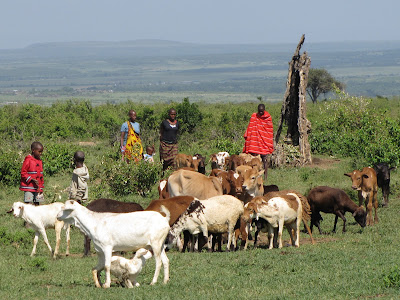 Another project that I was most interested in...was the MCC goat project, which we at Mennonite Girls Can Cook supported last year.  Now I know the difference a few goats can make in the life of a Masai family! 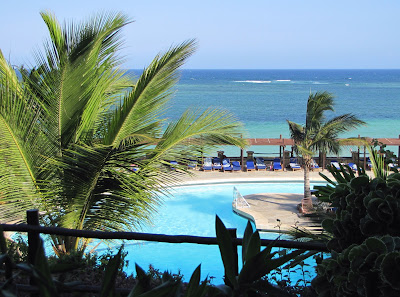 We spent our final week at a lovely resort on the Indian Ocean near Mombasa...where the skies are always blue, the sun never fails to shine, the sea is as warm as the bathwater...and the mango ice-cream can’t be beat!  There are many travel tales waiting to be told...and with time, many will be.  For now...I am glad to be home...where I know I belong.  I have some grands I’ve been missing...and a whole lot of catching up to do on the home front.  As for you, my blogging friends...I’ll be by to check up on you...soon!
Have  a great weekend...