Though the month is only half-spent...here I am!  The end of August will find us on the east coast of Canada...and I'll tell you about that once I'm back.

Now...let's go back to the end of July.  We packed up the RV and headed to the North Okanagan for a few days.  Our first stop... 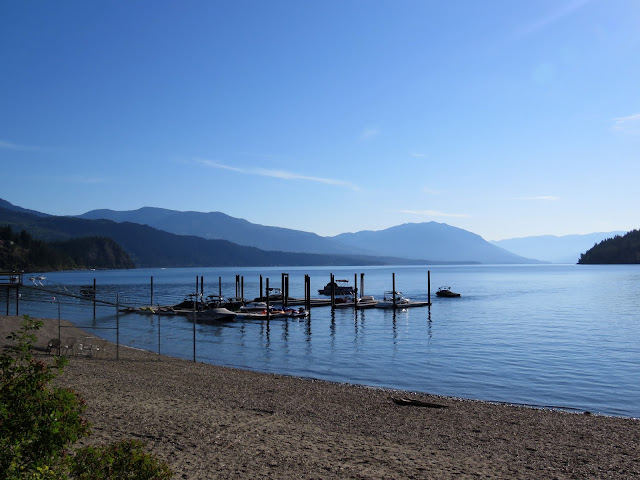 ...Shuswap Lake.  Specifically...Scotch Creek where we spent a few days parked at the cabin while several of my sisters were vacationing there...along with my niece and her two wee ones. 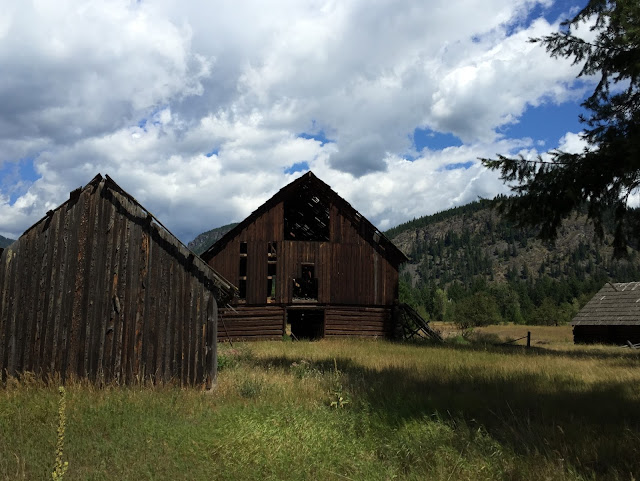 We have been to Scotch Creek many times over the past few decades...and it seems I always come home with one more picture of these old barns along the main road.  What is it about weathered old barns that appeals to me? 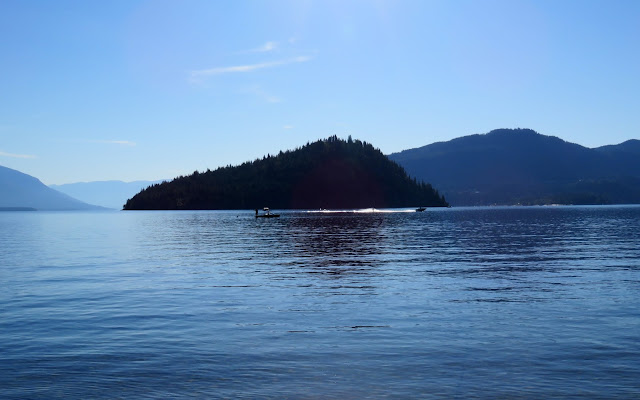 We walked along the shores of lake early one morning at Shuswap Lake Provincial Park....with its splendid views of the lake and Copper Island. 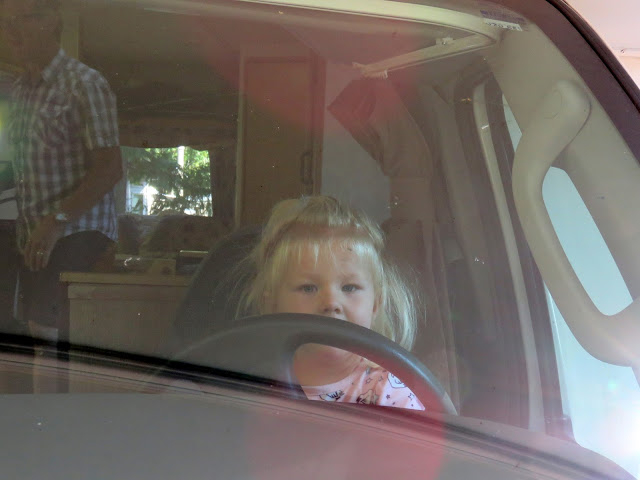 When it was time to move on...our wee grandniece, Brooklyn thought she might just hitch a ride with us.  Actually, she claimed the driver's seat and woke up the neighbourhood by trying out the horn.  Sweet child who lives in faraway Manitoba! 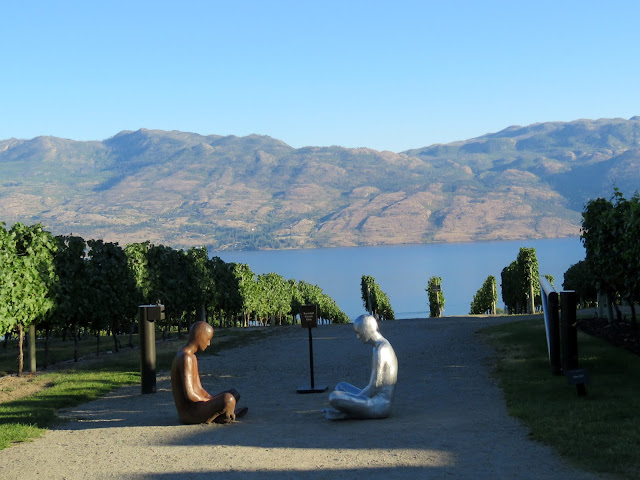 Next stop was Kelowna in the South Okanagan...where the sun always shines and the vineyards grace the hills.  It was a good time!  We camped in an apple orchard...ate fresh peaches and plums...and visited all the nieces and nephews at their homes.  I think we invited ourselves over...but we are glad we did! 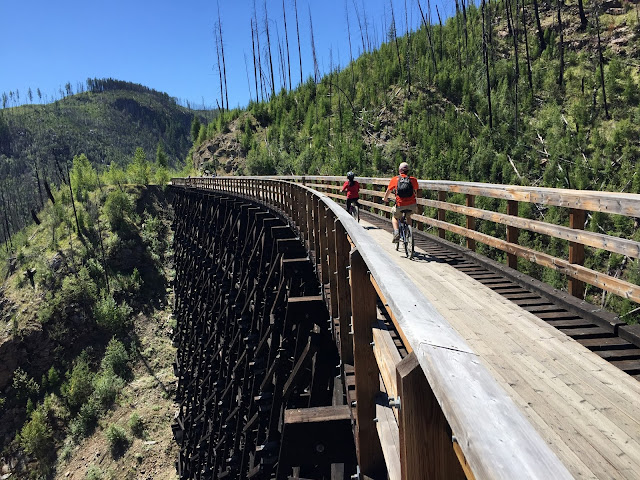 While we were in Kelowna...we celebrated our 44th wedding anniversary. We had always planned to cycle the Myra Canyon portion of the Kettle Valley Railway trail...and July 31st seemed like the perfect day to do that. 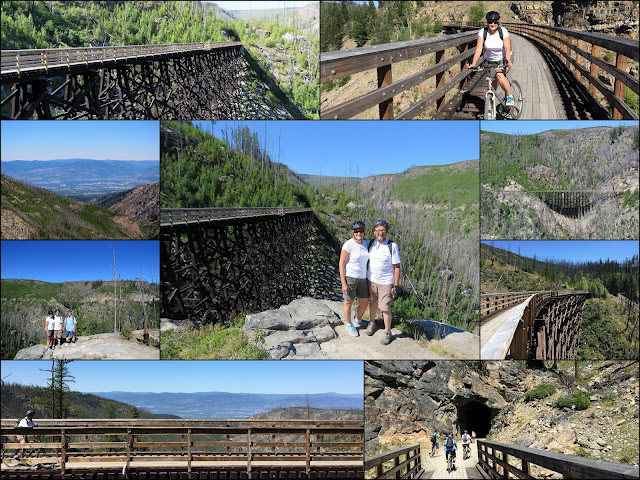 Myra-Bellevue Provincial Park is a short 25 minute drive from the city....one that takes you through rolling vineyards and past several great lookout points.We began our cycling adventure from the east entrance...on a trail that took us over 18 trestles and through two tunnels. Since the 24 km. (round trip) trail was constructed on the former Kettle Valley rail-bed...it is almost flat and suitable for all levels and ages.  In 2003 twelve of the 18 trestles were destroyed in a massive forest fire...along with some 200 homes in the area. The trestles have all been re-built...and the trail through Myra Canyon is part of the Trans-Canada Trail system. The charred trees that still stand are evidence of the huge fire that devastated the area...but new growth from the forest floor is already taking over.  It was a beautiful ride...with stunning views and lots of history (it is also a National Historic Site). It was an excellent adventure...and the perfect thing to do on our anniversary.

Our brother-in-law John...who lives in Kelowna...had never cycled the trail and joined us. He is quite amazing for an octogenarian!   While we were out cycling, Liz (his wife) was back home preparing a lovely anniversary dinner for us.  It was a most memorable day. 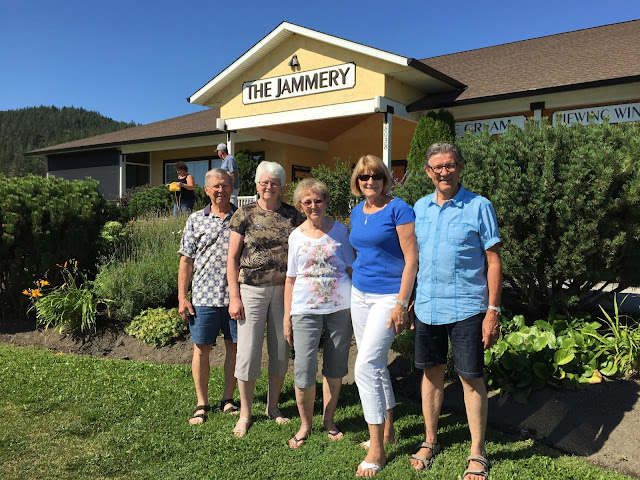 Before we left for home the next day...we enjoyed breakfast at The Jammery with John and Liz and Martha (hubby's sister).  It's a great place to have brunch...featuring homemade everything! 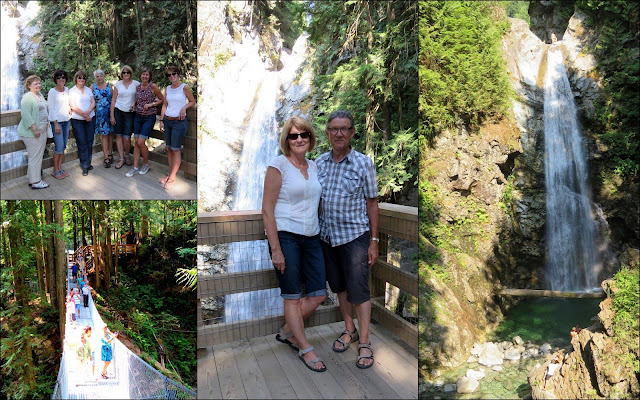 We were back in time to be part of the Mennonite Girls Can Cook summer get-together.  Seven of us and our spouses hiked to Cascade Falls in Mission...and checked out their new suspension bridge.  It's a lovely spot...and the company was the best too! 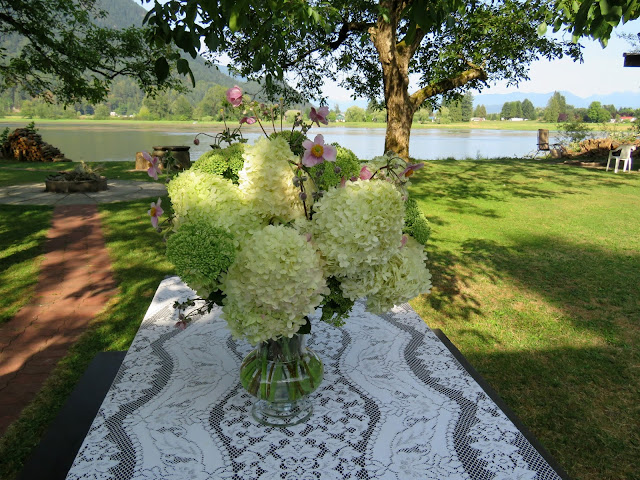 From there we made our way to Anneliese's lakehouse on Hatzic Lake...where Marg and John also joined us for a BBQ dinner.  (We just wish our two Manitoba girls could join us at times like these.)  The sun was shining...the food was fabulous...the setting was perfect...and we always have such a great time when we get together! 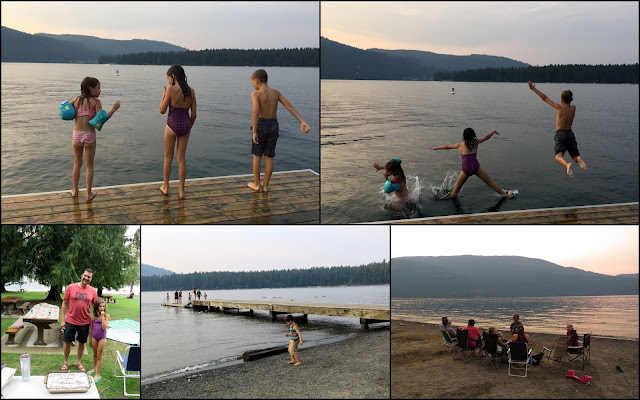 Kris had a birthday last week.  The years just seem to fly by!  We got together for a picnic / birthday party at Cultus Lake one evening to celebrate.  The kids had great fun in the water...and the rest of us had a good time on dry land.   Happy Birthday to our  firstborn...who thinks he is 39...again.  We know better! 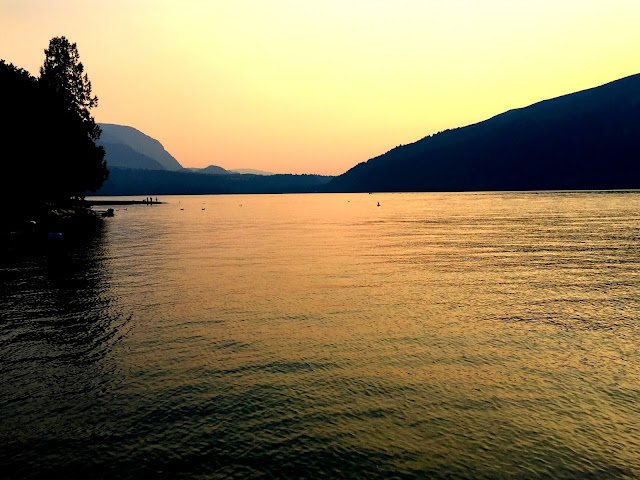 Cultus Lake Provincial Park is right in our backyard...a beautiful place to have a picnic or watch the sunset.  We should visit more often!

A sunset is always a good way to end a post, right?  Enjoy what's left of August...and I'll be back come September!