Let me start our tour of Jerusalem with a photo of Temple Mount in the Old City... 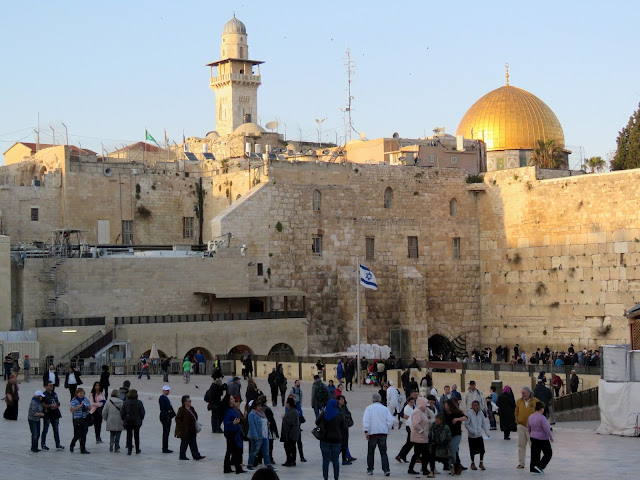 ...a holy site for Christians, Jews and Muslims. 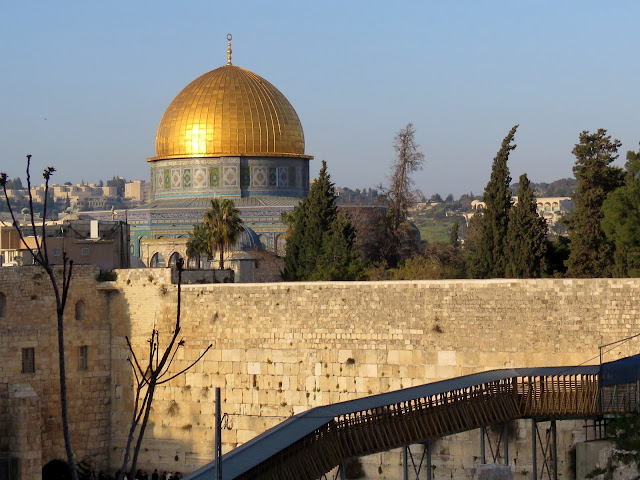 The most recognizable Jerusalem landmark is  The Dome of the Rock which was completed in 691 ...and is situated on the exact location where the second temple once stood. 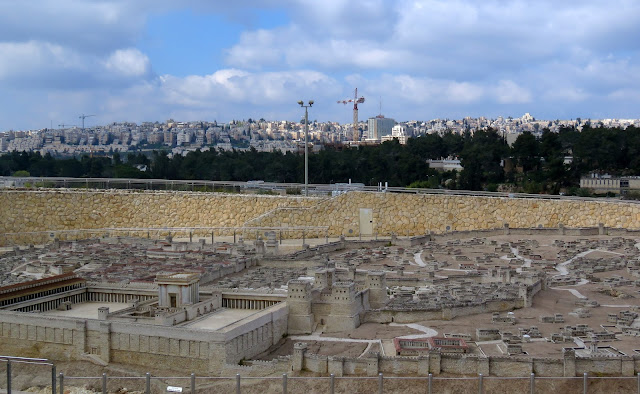 We actually began our tour with a stop at the Israel Museum to view a model of the city of Jerusalem and have a brief history lesson. The model is a 1:50 scale of the city during the second temple period...more than twice the size of the present Old City.  It was good to be able visualize how the city once looked...and to reconcile that with what we were seeing as we visited different parts of the city. 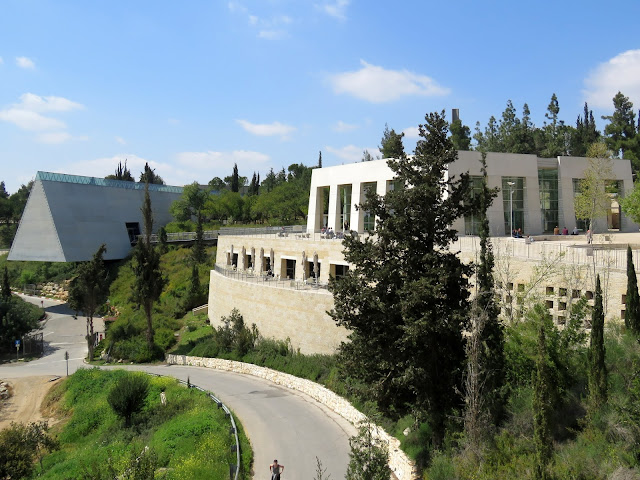 Our visit to Yad Vashem...the Holocaust Museum...was rather a sobering one.  The name is taken from Isaiah 56:5 and means 'a place and a name' ...a lasting memorial.  We walked along the Avenue of the Righteous Among the Nations where trees have been planted in honor of those non-Jews who risked their lives to save Jews during the Holocaust.  Plaques adjacent to each tree record the names of those being honored along with their country of residence during the war.  We know there is a Corrie Ten Boom tree over there...but never found it!

On a lighter note... 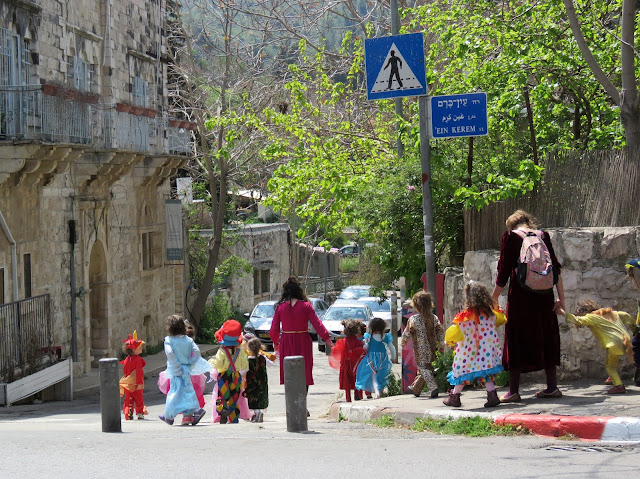 ...our next stop was the village of En Kerem (in the Jerusalem hills)...with its winding streets and narrow alleyways.   We wondered why the children were all in costumes and discovered that it was Purim...and our guide explained that it was a big party which included dressing up, eating, drinking and being merry throughout Jerusalem.   The celebration dates back to the time of  Queen Esther in the Old Testament...and the saving of the Jewish people from Haman. We saw a lot more celebrating as we carried on our tour!

The 'City of David' (as it is now called)...was known as Mount Zion in the Old Testament. 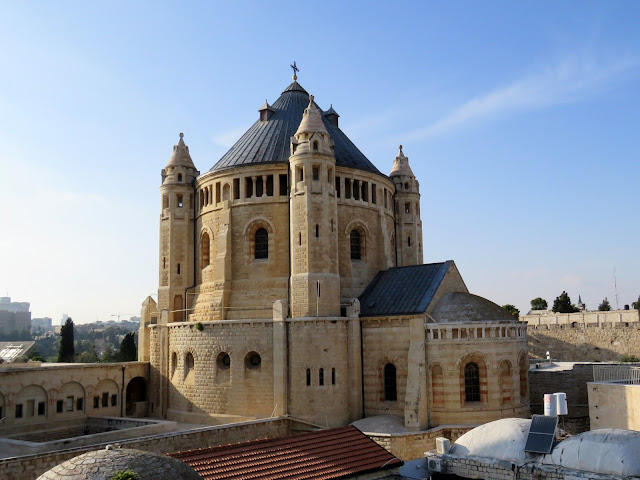 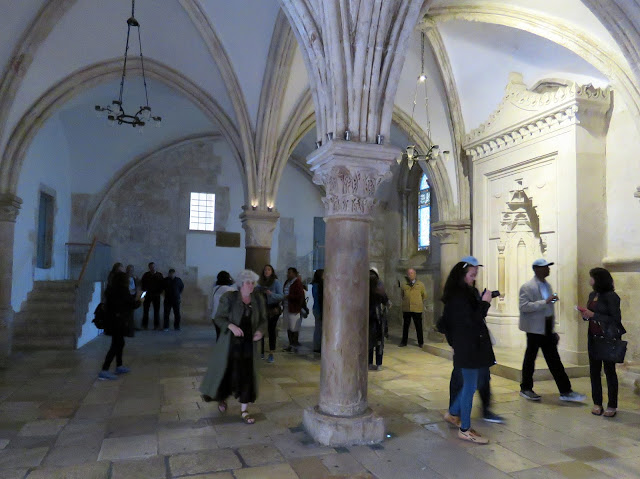 ...Room of the Last Supper 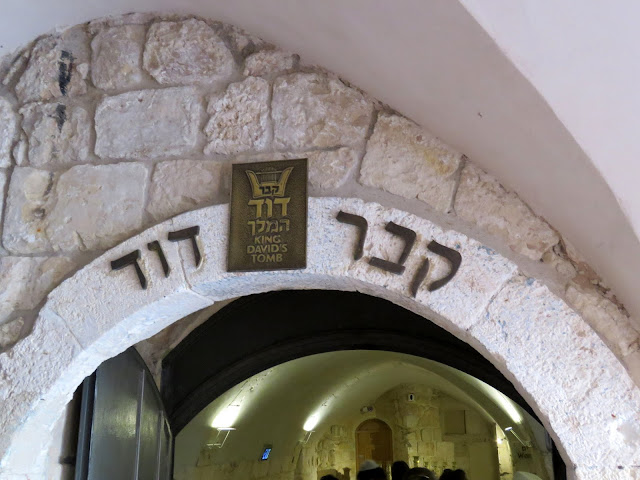 ... and King David's Tomb are all part of this complex that look rather like a medieval fortress. 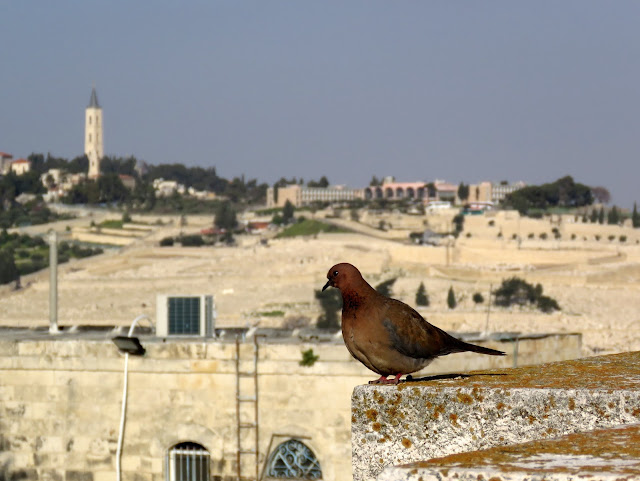 We found a stairway leading to the rooftop of 'the fortress' with the best birds eye views of the city! 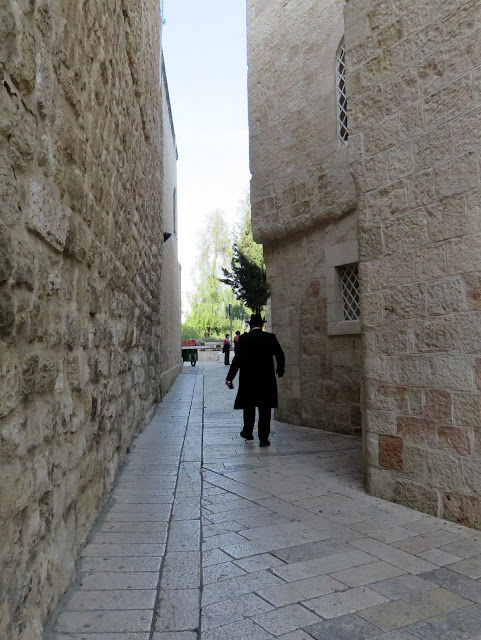 Narrow cobbled streets and walkways are the norm! 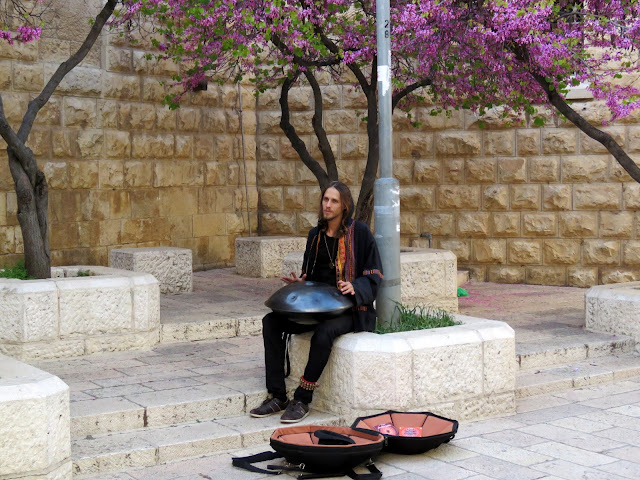 Memories of our time in the City of David include the fragrance of the purple blossoms and the music from the 'hang drum' that filled the air. 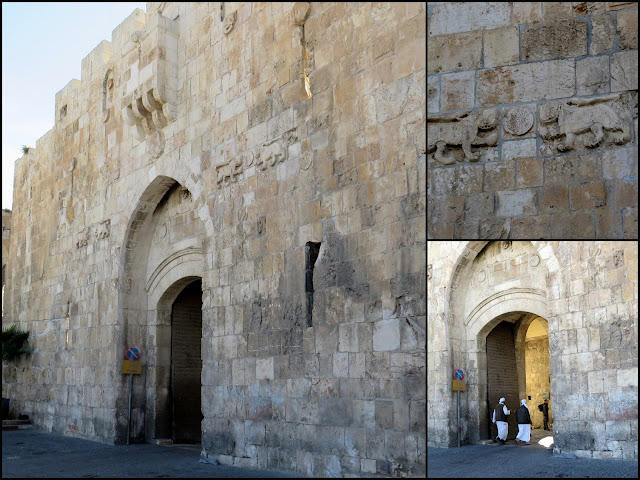 The Old City of Jerusalem is surrounded by a wall (built in the ealy 1500's and renovated since) and seven open gates.  Pictured here is Lion's Gate on the east wall...easily recognized by the figures of lions near the gates crest. 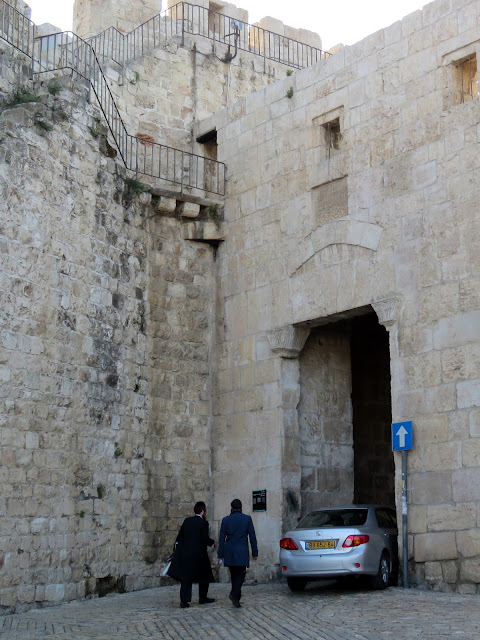 Cars somehow mange to squeeze through the gates that were built for pedestrians and horses. Pictured here is a car exiting via the Zion Gate. 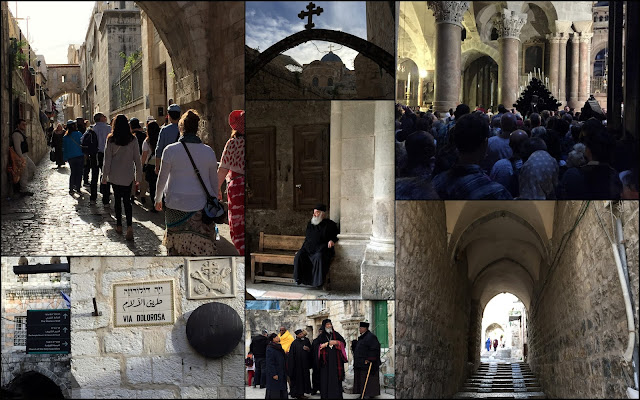 A few days before Easter...we joined those who walked the Via Dolorosa...'the way of sorrows' is a path that follows the steps of Jesus to his crucifixion. The only real crowds that we encountered while in Israel were at the end of that walk...inside the Church of the Holy Sepulcher. Though the route that Jesus walked 2000 years ago was likely not this one...I was reminded again of His last earthly journey as a beaten man carrying a cross...and as the resurrected Lord. 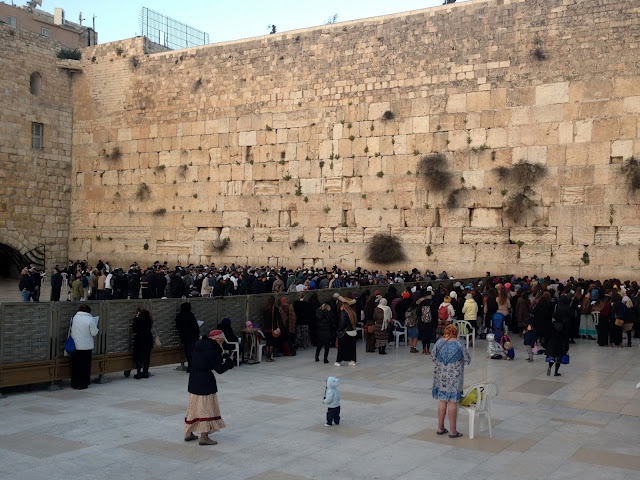 And then there was the 'wailing wall' (now called the Western Wall)...the last remains of the second temple.  This is the Jews holiest place of prayer...now with a partition to allow the women access to the wall as well. 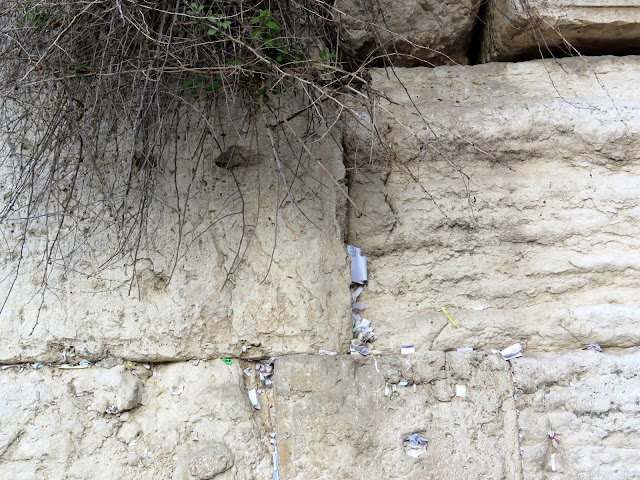 Tucked into every little crack and crevice of the wall are little notes...letters to God left behind by visitors.  The notes are collected twice each year and buried in the Jewish cemetery on the Mount of Olives. 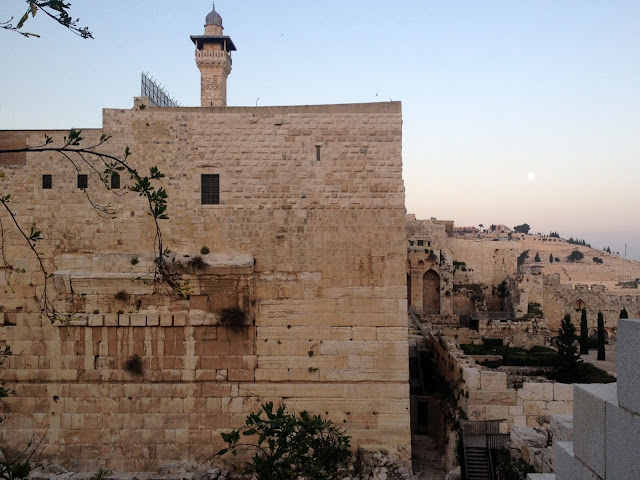 And this was our view as we left the Western Wall at the end of the day...a moon in the sky over Jerusalem.

Did I mention that one will never go hungry in Israel?  We enjoyed our share of falafel and hummus during our stay...with our favorite being the falafel wrap we got from a street vendor at the market place.  It was an 'everything wrap'...falafel, salad, and even french fries all wrapped in a tasty flatbread. The french fries in there were a bit of a surprise! 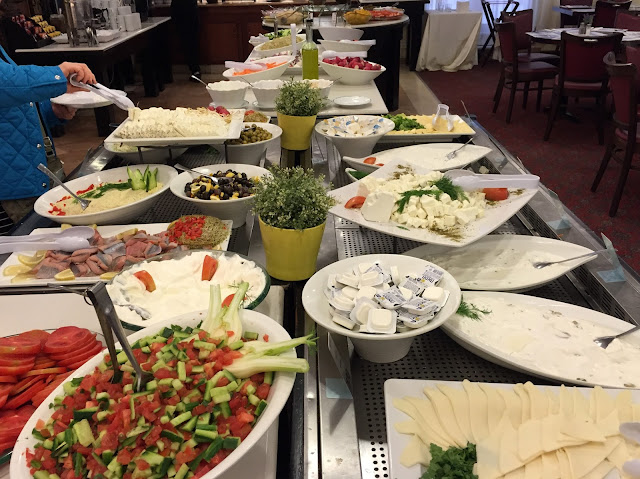 Buffet breakfasts at our hotel looked like the one pictured here...cheeses, veggies and fish...along with fresh fruits and breads. Give me fruit, yogurt and a fresh croissant and I'm happy! 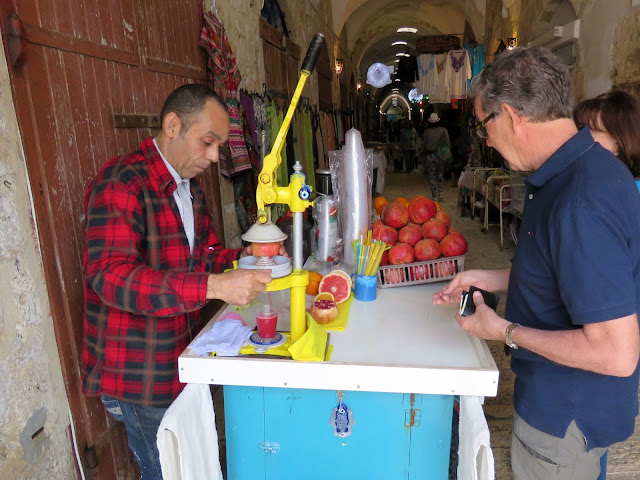 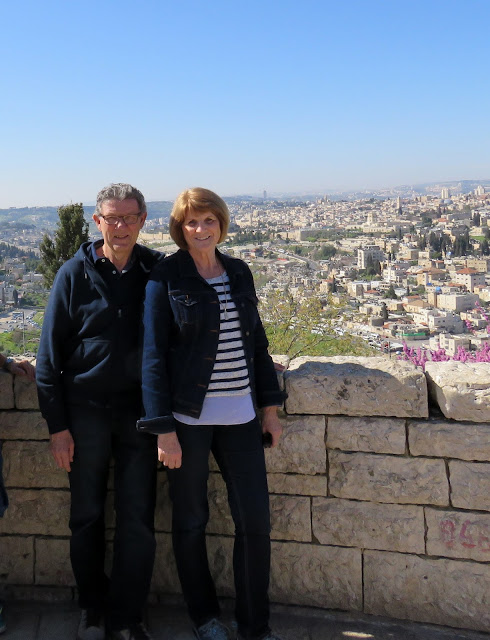 Let me end this post at the look-out on Mt. Scopus... 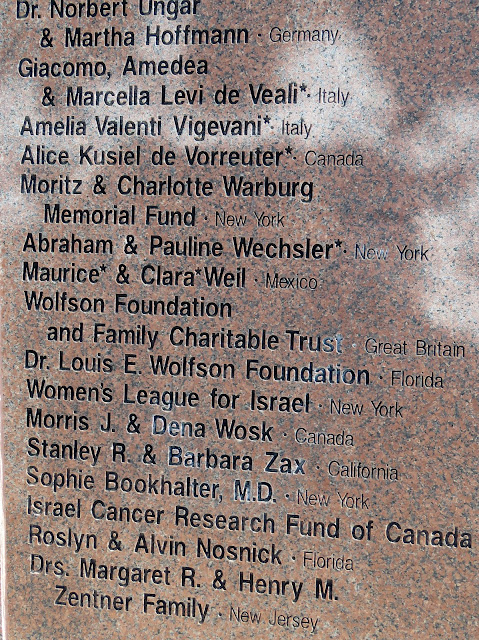 ...where there was a 'wall of benefactors' listing those who had donated upwards of  $1,000,000 US to the Hebrew University of Jerusalem for facilities, research or scholarships.  Near the bottom we recognized the name Morris Wosk...a Canadian businessman who once had a furniture and department store in our town.  It is a small world after all!


And that, my friends...was Jerusalem as seen through my lens in March of 2016.

Email ThisBlogThis!Share to TwitterShare to FacebookShare to Pinterest
Labels: israel