Reykjavik is the world's most northerly capital city (just 2 degrees south of the Arctic Circle) and the largest city in Iceland. The name means 'smoky bay'... due to the natural geysers and thermal springs found there. It was not on our bucket list and not really even on our radar until a few months ago. But we are always up for an adventure and when we saw an incredible deal on a 6-day trip to Iceland, we signed on...as did our good friends who have traveled with us many times in the past.  Let me take you to Reykjavik today. 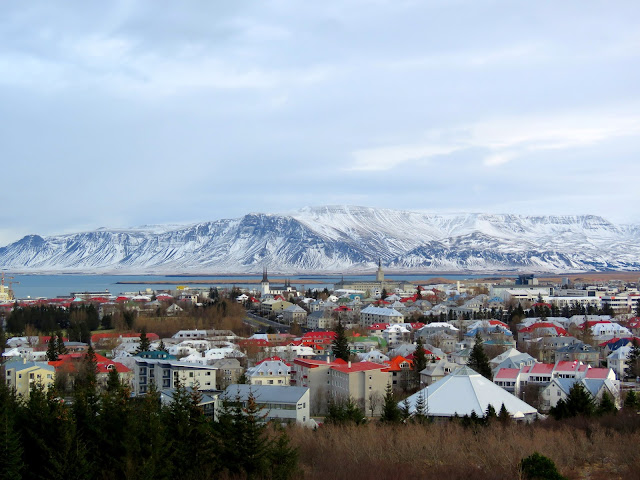 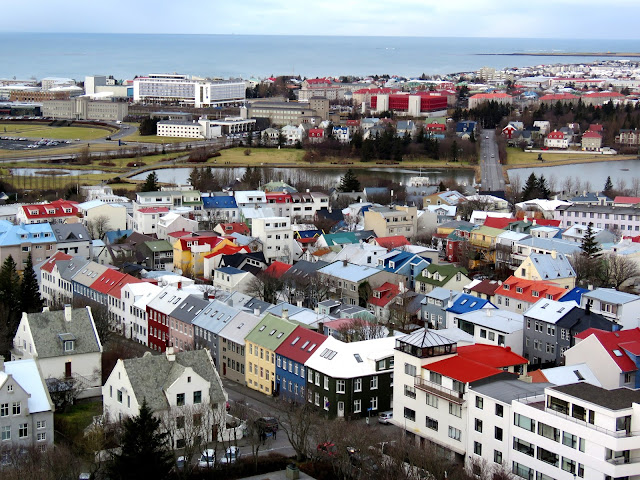 And most of them prefer bright colours, it seems! The brightly painted houses that line the streets reminded me those in St. John's, Newfoundland. 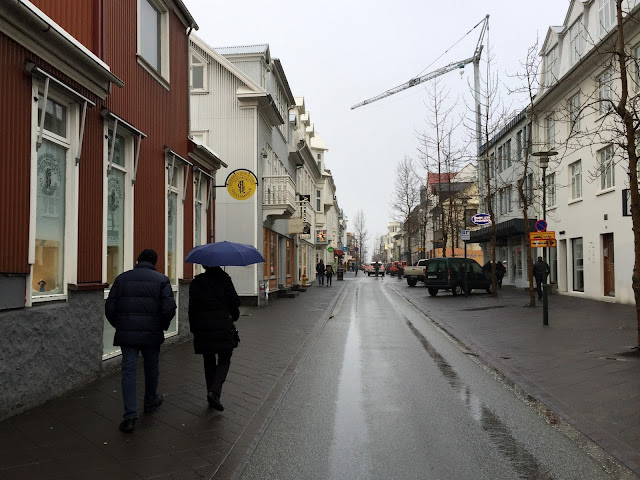 We came well-prepared for the bitterly cold weather of Iceland.  What a surprise to arrive to rain and milder temperatures than those we left back home.  They were experiencing the mildest winter on record and had not had any snow in the city before we came.  Once we had deposited our luggage at the hotel, we got out the umbrellas and started walking.  The locals are very friendly and are mostly able to speak English. 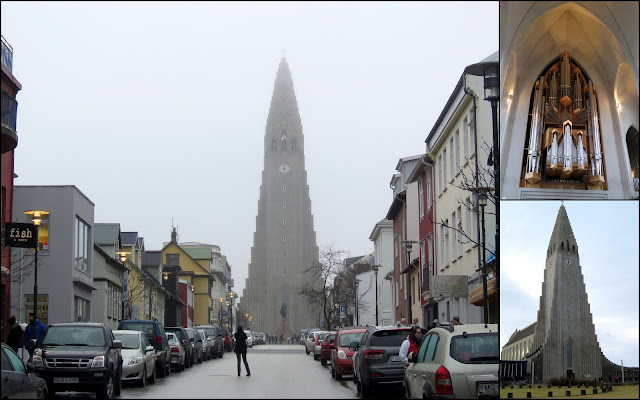 Hallgrímskirkja is one of the cities most well known landmarks.   This Lutheran church is not only the largest church in Iceland, it is also the tallest structure. And at the very top, there is an observation deck with a fabulous view of the city. 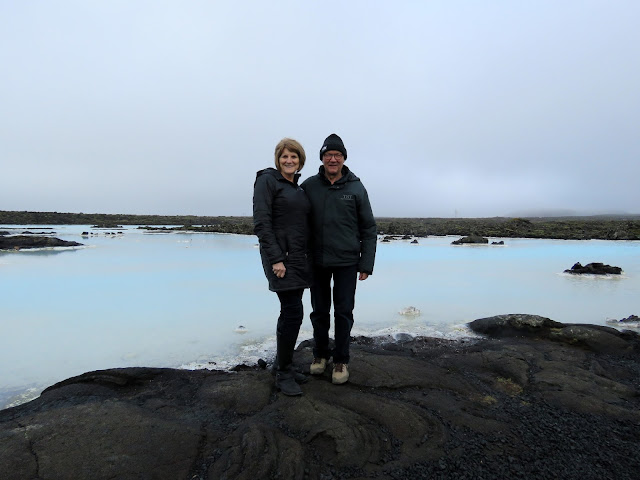 The lagoon is actually man-made...fed by the water output of the geothermal plant nearby. Hot water is vented from the ground near a lava flow and used to run turbines that generate electricity. Once the water has passed through the turbines, the steam and hot water passes through a heat exchanger to provide heat for the municipal water heating system. Then the water is fed into the lagoon for the tourists to enjoy! 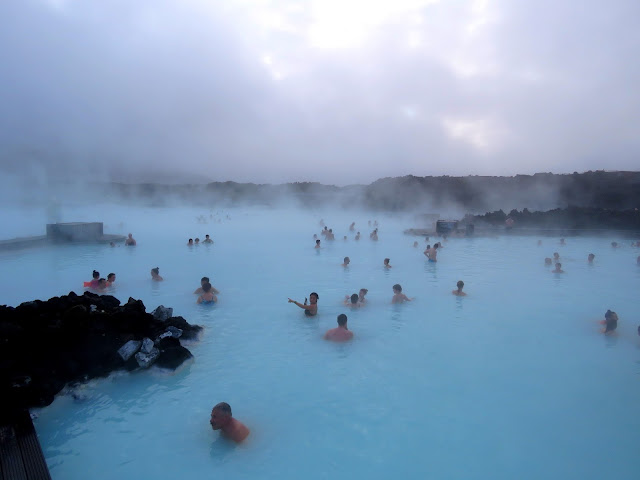 The lagoon's warm, mineral-rich waters make it the perfect place to soak for an hour or two. Or more. 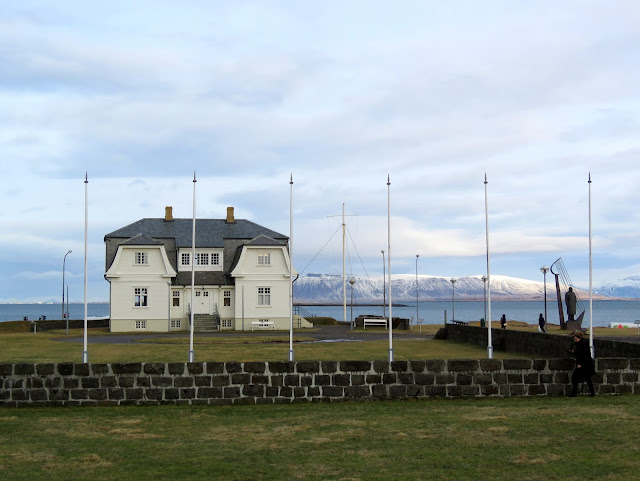 We stayed at the Foss Hotel Reykjavik and from our 12th floor window, we looked down on this charming white house situated along the shoreline below us. We learned that it is best known as the location of the summit meeting of presidents Ronald Reagan and Mikhail Gorbachev that marked the end of the Cold War.  This historical building, called Hofdi, is owned by the city of Reykjavik is used for official receptions and meetings. 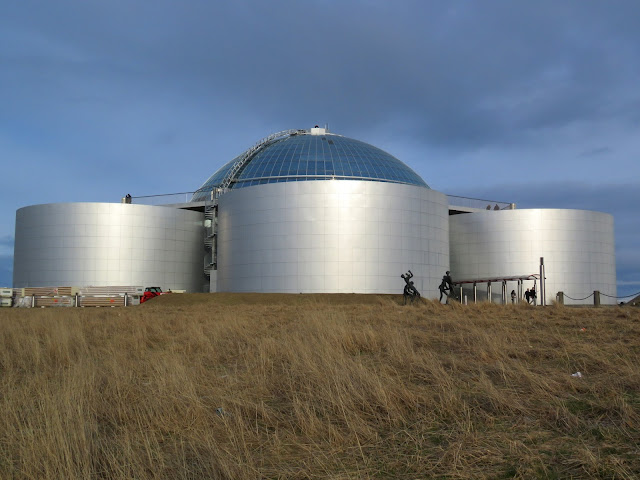 Situated on top of a hill, Perlan's sparkly glass dome can be seen from all over the city. This amazing glass building is supported by by six massive hot-water tanks, each with a capacity of four million litres.  The dome houses an exhibition area, several shops and an observation platform with fabulous panoramic views of the city and its surroundings....a great place to take photos. 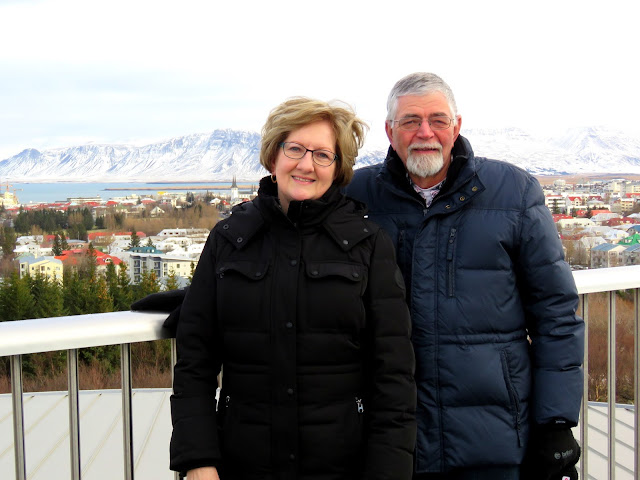 Our travel mates...Dave and Janet.

Two days into our stay...the snow arrived in Reykjavik.  Not a huge dump like we became accustomed to back home this winter... 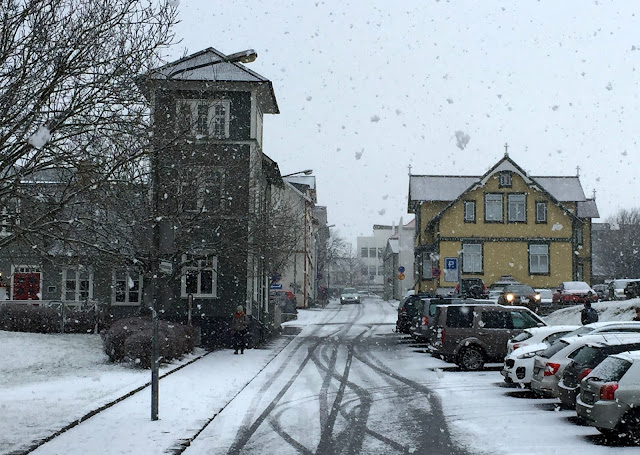 ...but just enough to make it look like Iceland. 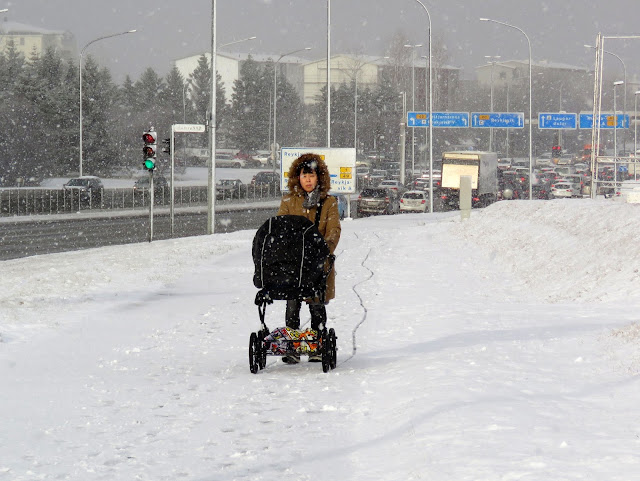 Is this not how Iceland should look in the winter? 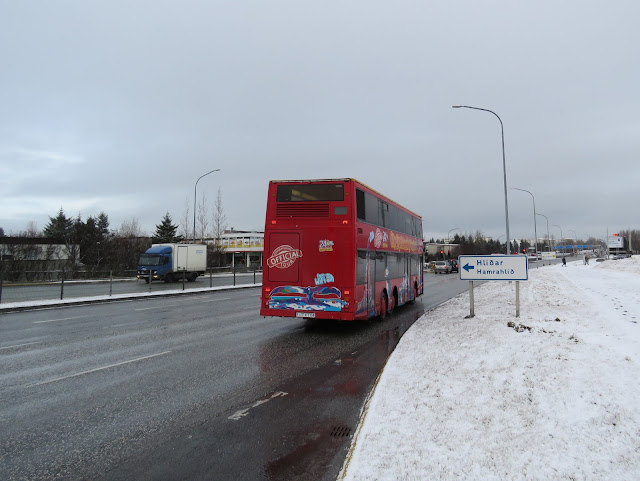 We noticed that the snow never stuck to any of the main streets...and many of the city sidewalks and parking lots were also free of snow.  We discovered that they use thermal water to heat the streets, the sidewalks and also their homes.

We did a 'hop-on ~ hop-off' tour of the city one day...stopping to spend time wherever we wanted.

The old harbour area was one of my favorite stops that day. 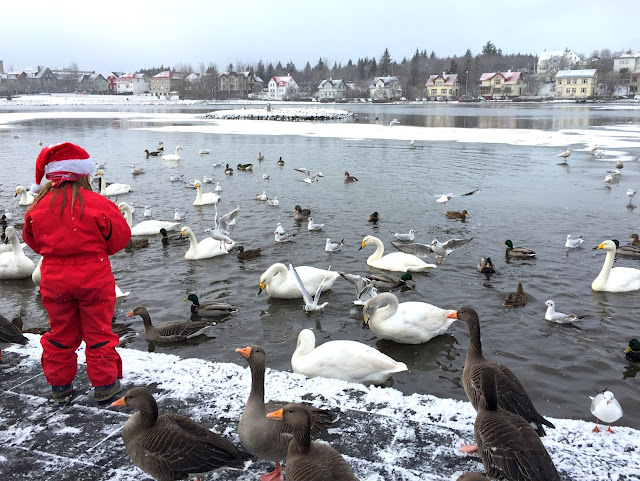 What fun to watch the children feed the birds! 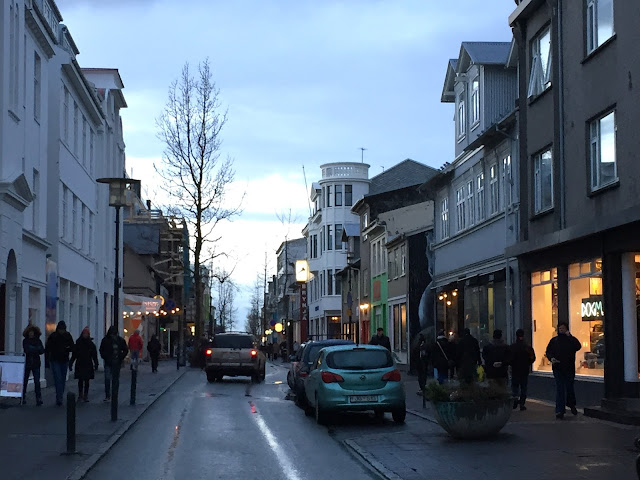 Evenings found us strolling up Laugevegur in search of a good place to have dinner.  We were always good and hungry come evening, since we usually just had a snack at noon. We found food to be very expensive in Iceland, and decided soon after our arrival that we could do without lunch! 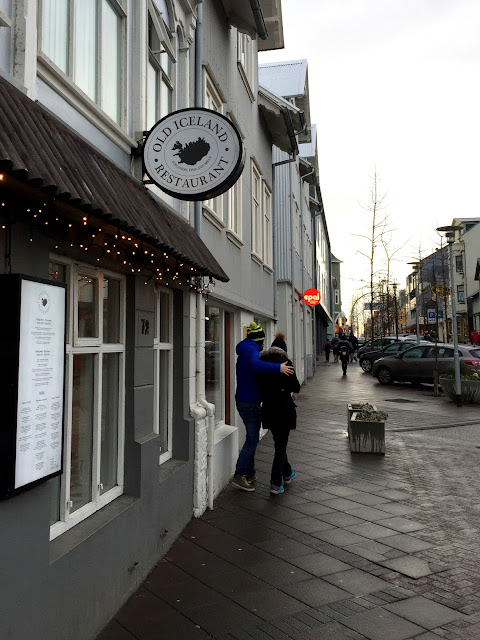 One night we ate at Old Iceland Restaurant...where we all tried a different Icelandic specialty.  The food was great...as was the service. 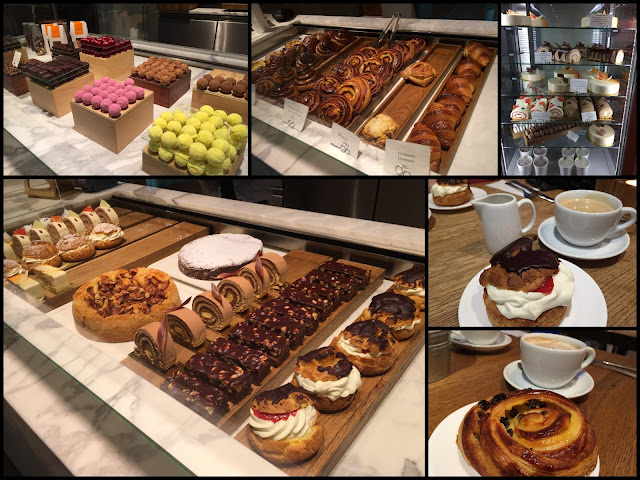 And when we were done dinner...we had coffee and dessert just down the street at the Sandholt Bakeri.  So good! 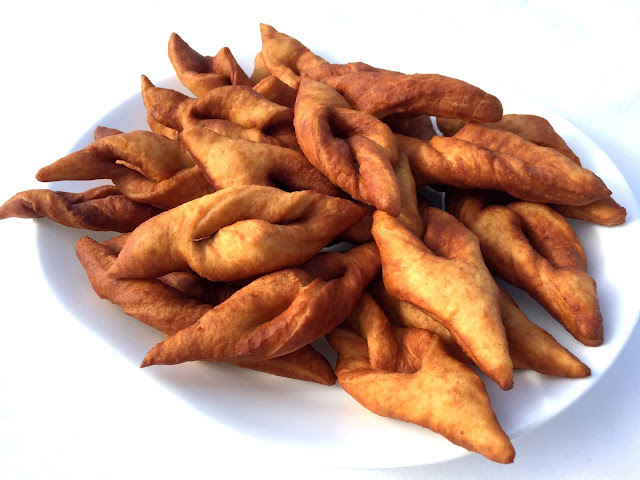 Someone near and dear to me who was born in Iceland, said we must try the Icelandic donuts while we were there.  We did.  And when we got home, I made some.  Just for fun!  They are called Kleinur...a slightly-sweet and spicy cake donut. 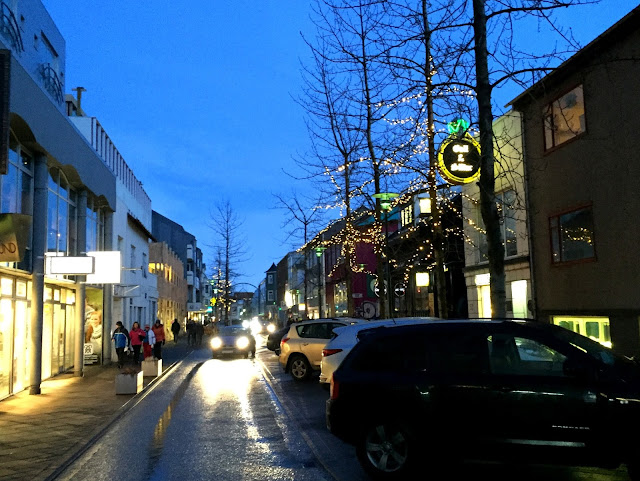 So ends our tour of Reykjavik for today. I'll be sharing a few of our other favorite Icelandic adventures shortly.  But for now...let me tell you how our time in Reykjavik ended.

We were due to fly out late Friday afternoon and had arranged for transportation to the airport early in the afternoon.  We had a leisurely breakfast that morning and then heard that all roads in and out of the city would be closed by noon due to a huge storm.  We packed in a very big hurry and left for the airport at 10:30 in the morning. We weren't the only ones! 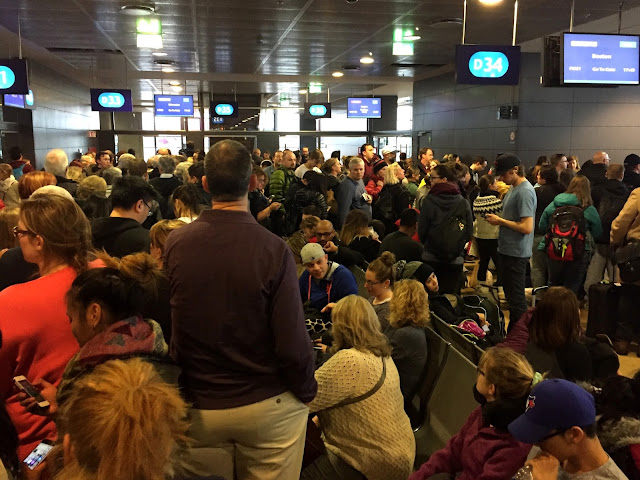 This is what Reykjavik airport looked like when we arrived...and all day long!  Most afternoon flights were cancelled and passengers had nowhere to go, so they hunkered down for the duration.  Our flight was delayed by an hour or two... 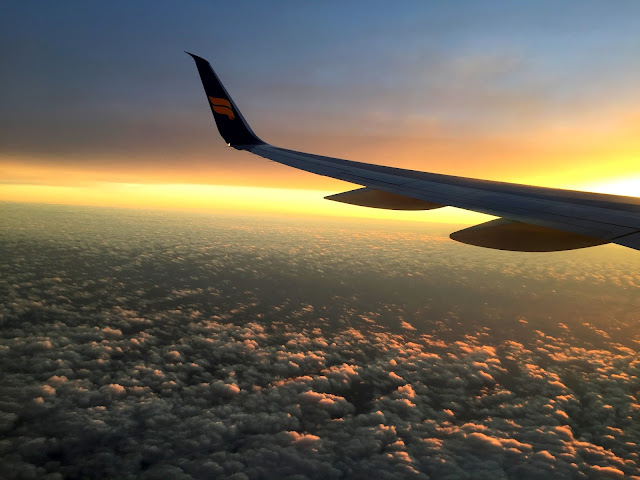 ...and once we were in the air, we breathed a sigh of relief.  We had a wonderful time in Iceland, but we really didn't want to stay there!

And so the sun set on our Icelandic adventure.