The Month of May ~ Musings and Memories

Why does it seem like this was a very long month?  Could it be because we experienced both winter and summer weather and everything else in between during the month of May?  We waited patiently for spring to arrive...and then went from cold and wet weather right to sizzling summer temperatures. 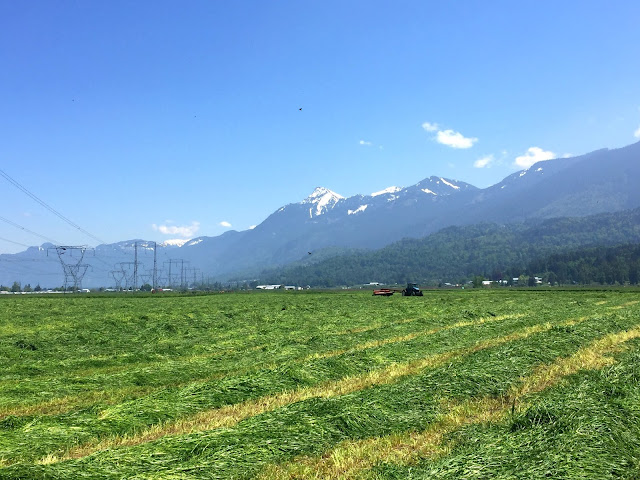 I'll post one photo of the first of the grass being harvested on the farm (our latest spring cropping ever) and then go back to the beginning of the month. 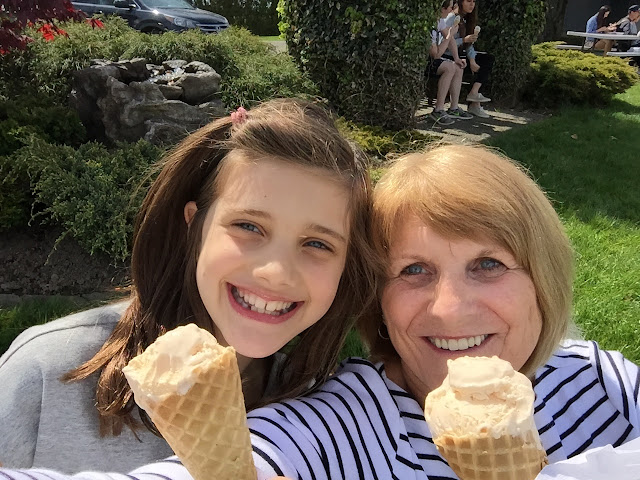 Ranen had a birthday and the two of us went on a birthday outing.
It began with mango ice-cream waffle cones at Birchwood dairy...
(which we ate on the lawn in the sunshine)
and then on to Michael's and Bath and Body Works.
We each found a few things to take home. 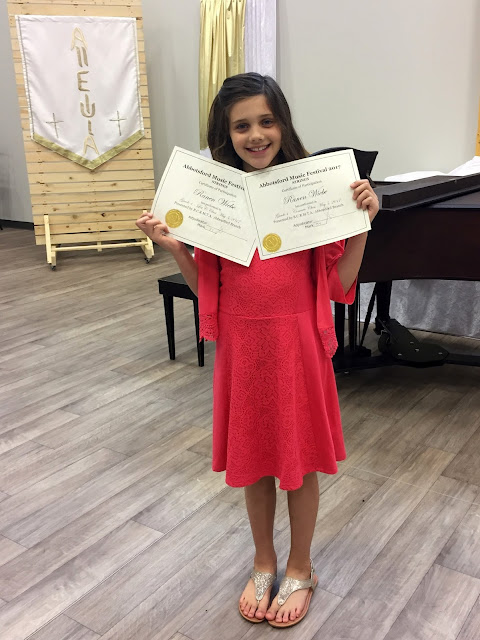 I also went to hear her play violin at the Abbotsford Music Festival...
where she played beautifully! 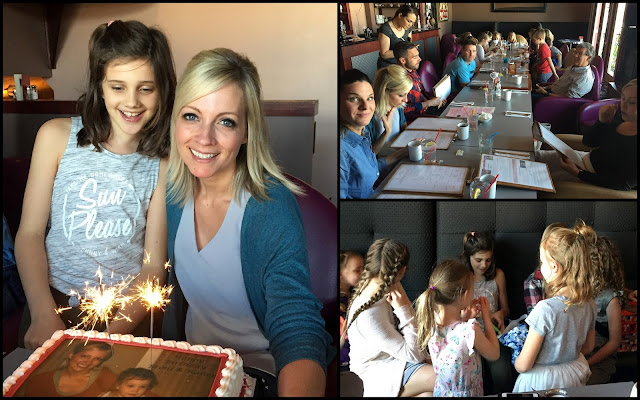 Since Ranen and Auntie Broni share a birthday, we usually have a joint family celebration.

We tried something different this time...
booking a room at a local restaurant for the whole gang.

The separate room was a brilliant idea!
We kept our noise to ourselves.
At least we tried.

Ranen is now 11.
I won't share Broni's age without permission.
But here's a clue: She is the same age I was when she and Jeremy were married.

Wishing them both a fabulous year! 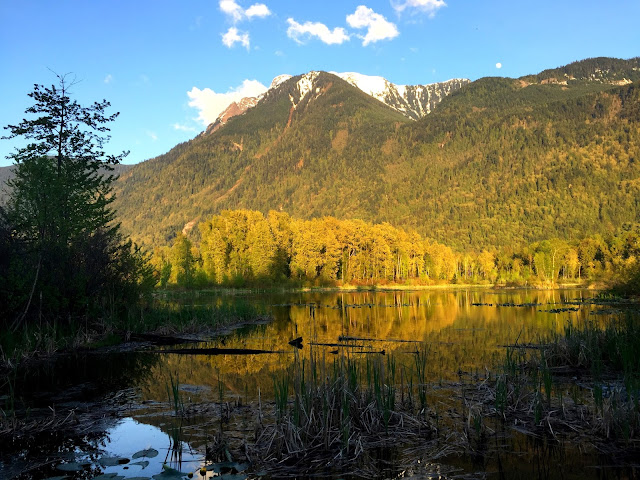 We had a few outings this month...
mostly on Sundays, since the weekdays were all about getting fieldwork done on the farm!
'Tis the season.

Cheam Wetlands Park is just a 15 minute drive from our doorstep...

...and a lovely place to walk on a Sunday afternoon in May. 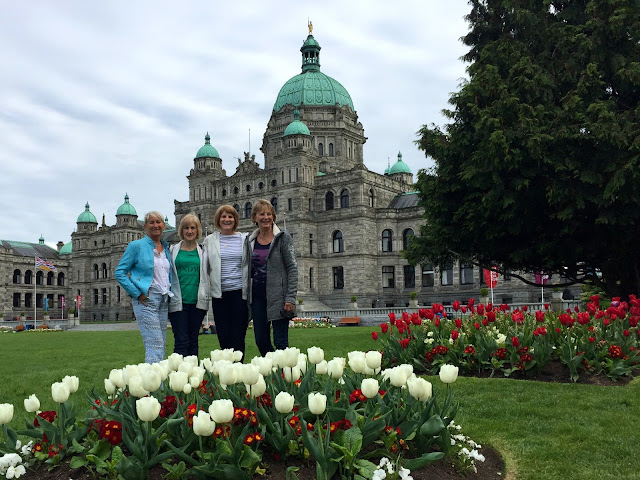 We had a provincial election on May 9th.
I voted in the advance polls, since I knew I would not be around that day.

Four of us...
who were best friends in high school...
took a little trip to Victoria for two days.

We had not been all-together since graduation.
Since we all turn 65 this year...
we decided that was a good excuse to plan a bit of a celebration. 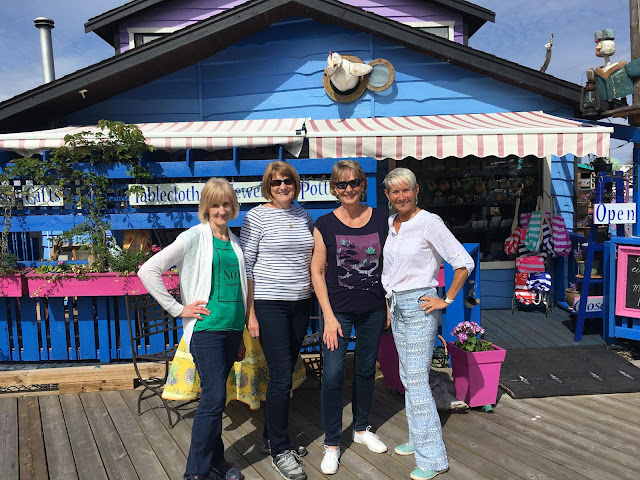 Vi, myself, Darlene and Carol.
What fun we had!

We sailed across to the island in the morning...
checked into our condo on the waterfront...
and then walked to Fisherman's Wharf for lunch. 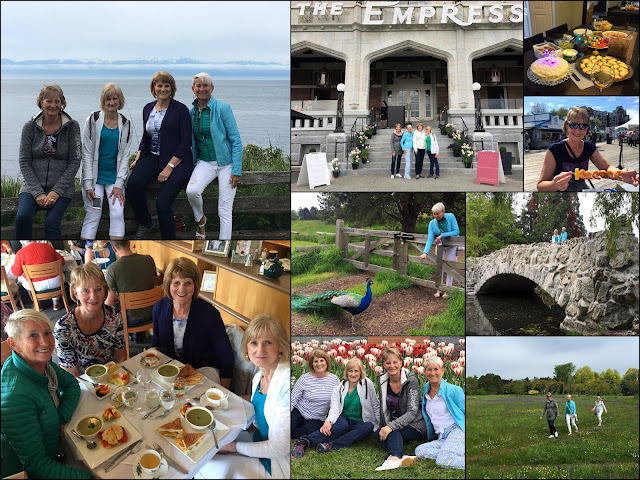 While in Victoria we walked around the inner harbour...
toured the old Empress Hotel ...
did a 'Hop-On Hop Off' city tour...
visited Beacon Hill Park...
had a lovely lunch at the White Heather Tea Room in Oak Bay...
and did a lot of catching up!

We had a wonderful evening together in our suite...
enjoying an appetizer buffet, birthday cake, and refreshments...
while reminiscing about old-times.

We talked family.
And faith.
And politics.

We tuned in to see the results of the provincial election.
There was no clear winner that night.
There still isn't. Really.
We aren't cheering.

We discovered that after all these years...
we could just pick up where we left off and have a wonderful time together.

We are all on the same page when it comes to things that matter most in this life!
We are also committed to praying for one another.
Friends are the best.
I love these true friends-of-a-lifetime! 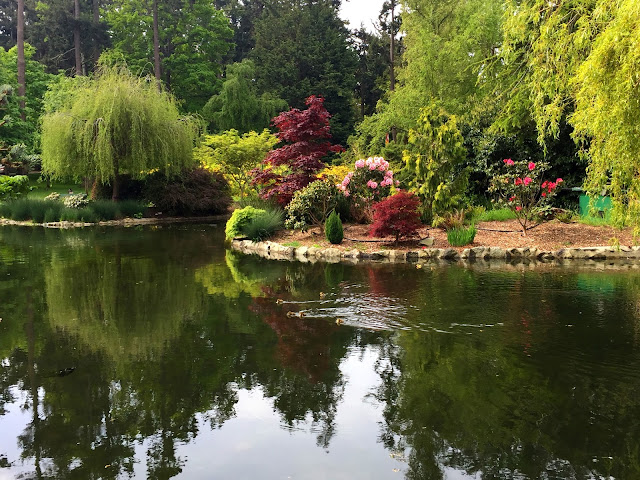 Here are a few more pic's from Beacon Hill Park. 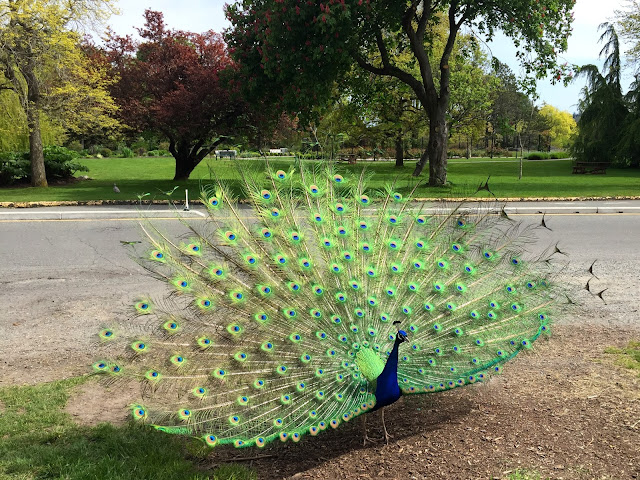 We had an 'up close and personal encounter' with this peacock.
He was a pretty boy! 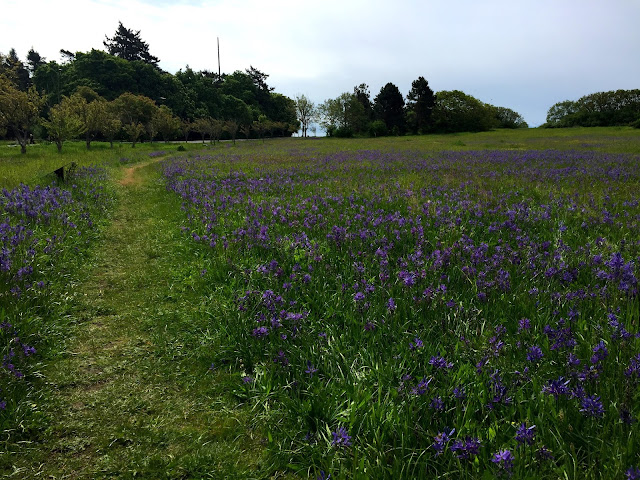 We walked through this sea of blue flowers to a viewpoint over the Juan de Fuca Strait.
Apparently they are satin-flowers...which thrive during a cool spring.
Beacon Hill Park is worth a visit! 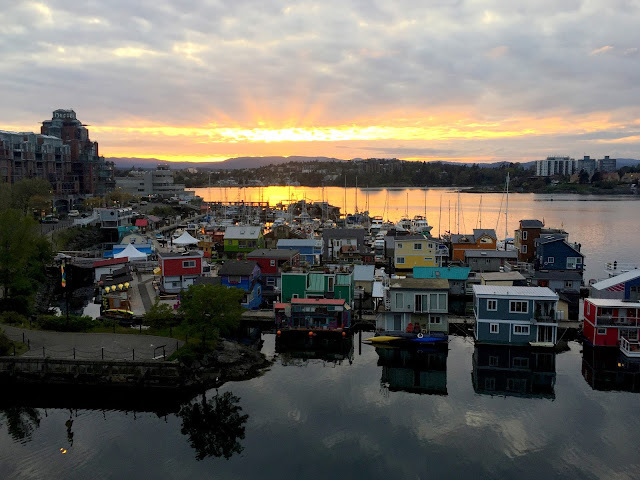 And one last photo from Victoria...
Fisherman's Wharf as the sun was setting, taken from the deck of our hotel.

I'm not sure how we managed to pick the only two days in early May with half-decent weather.
It was cool...but we never had rain! 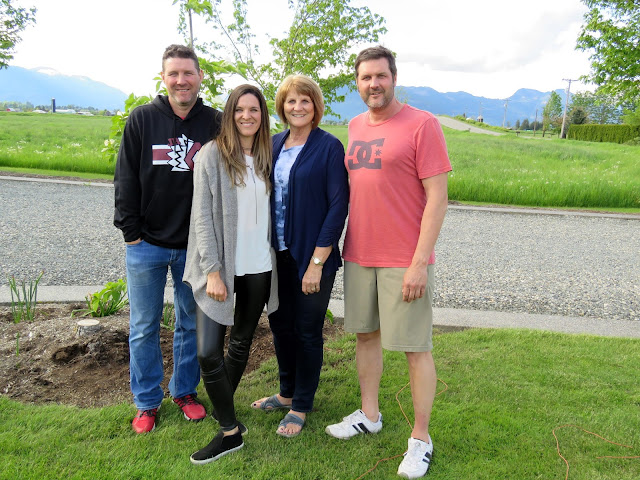 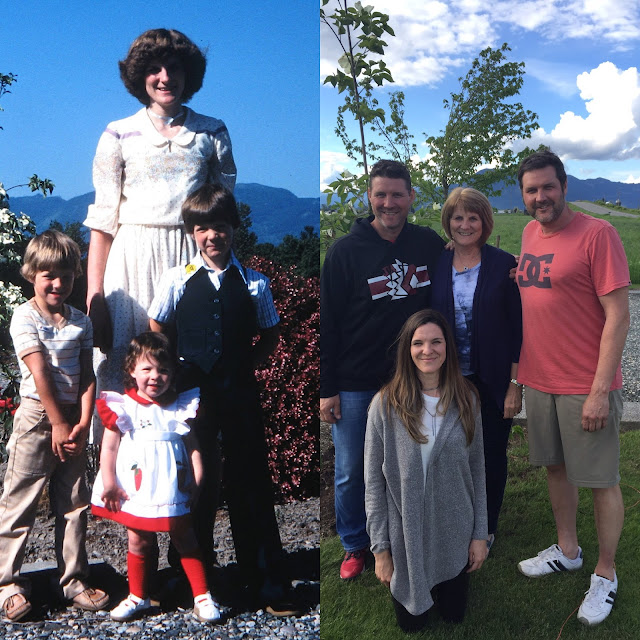 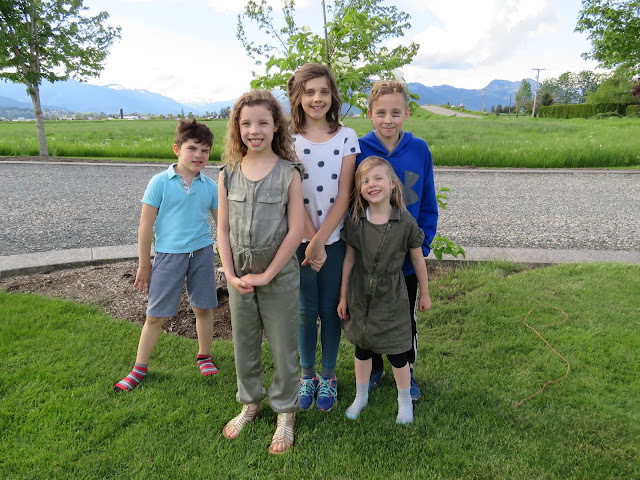 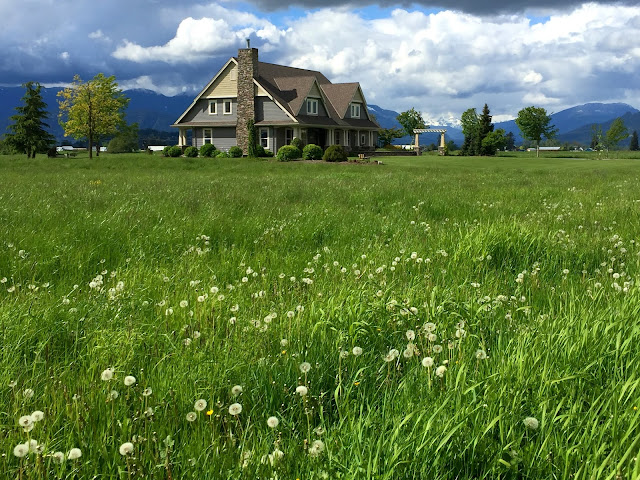 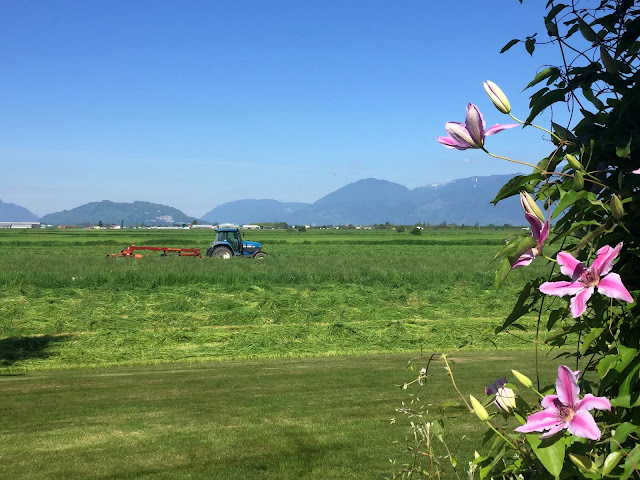 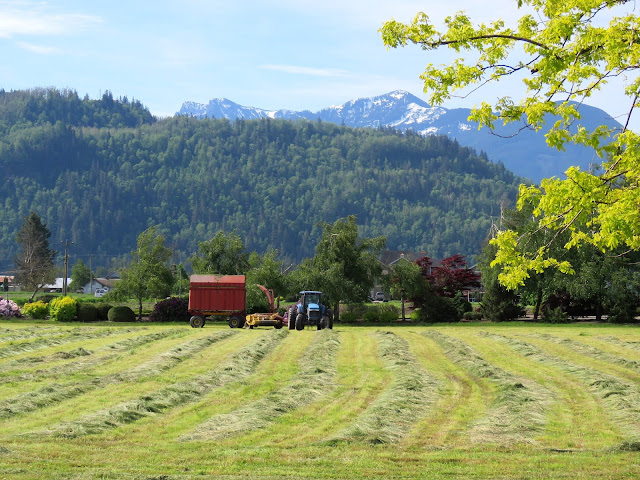 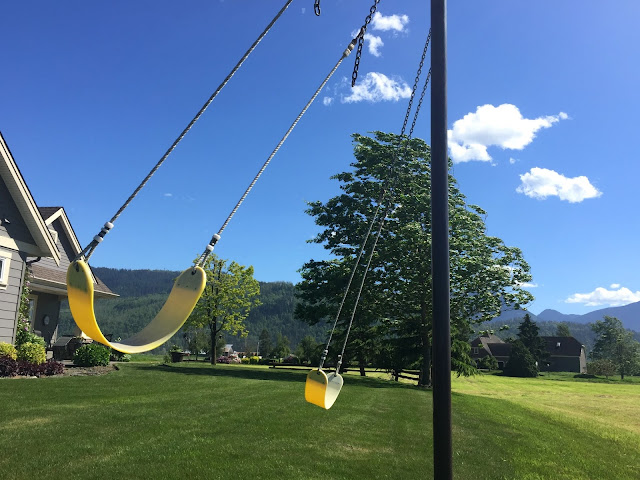 We were not expecting a windstorm with that kind of heat!
Many of the young leaves on the trees shriveled and wilted. 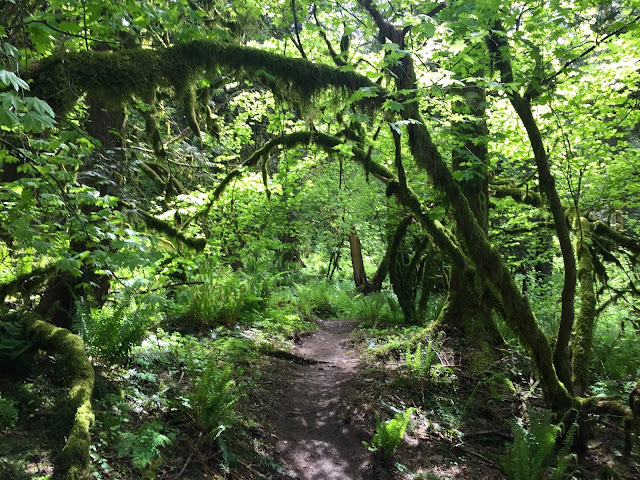 Another Sunday afternoon walk took us through the new community forest on the eastern hillsides, not far from our place.

Moss covered boughs, ancient trees and silence.
It's a great place to spend some time! 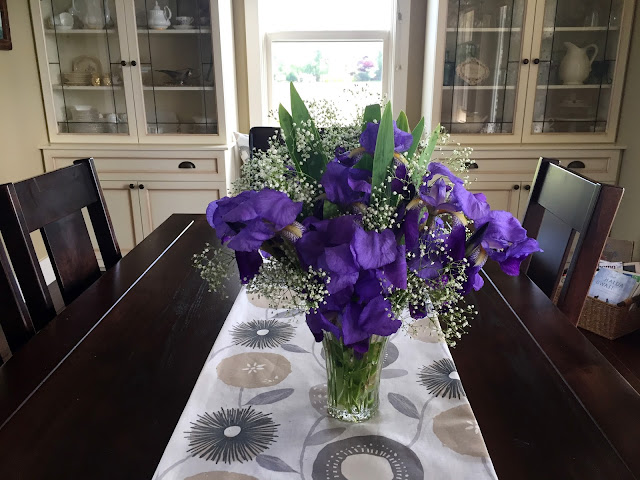 My mom's irises bloomed in my garden for Mother's Day.
They are a beautiful reminder of her. 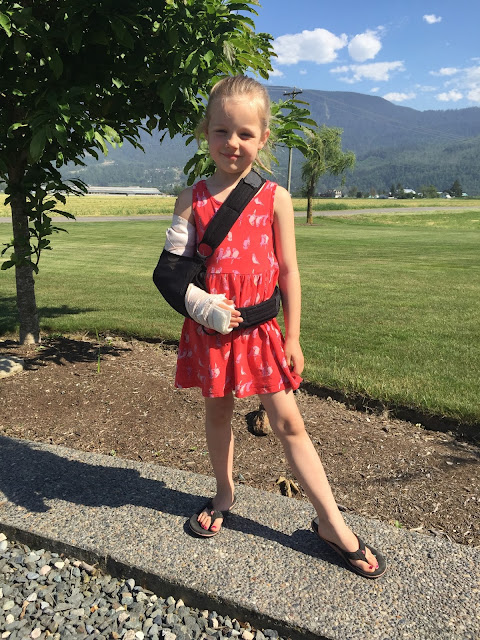 Though teeter totters and merry-go-rounds have long since been removed from school playgrounds...
one can still get injured there.

Lucy fell from the monkey bars and broke her elbow last week.
Thankfully, her uncle was working when she showed up at ER and was able to look after her.
She will be carrying around a heavy arm for her last month of kindergarten. 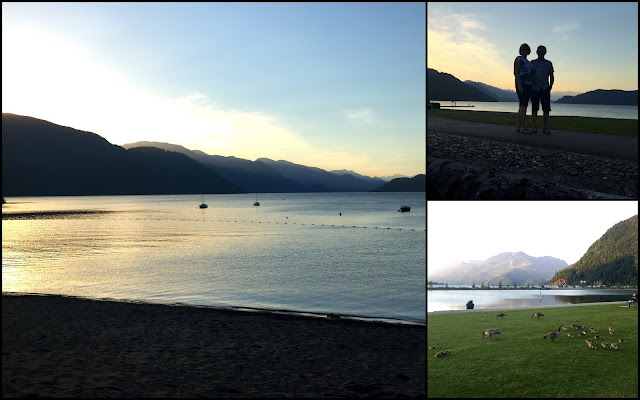 We walked along the  Harrison Lake promenade at the end of a very hot day this past weekend.

Harrison Hotsprings is one of my favorite local spots...
whatever the season. 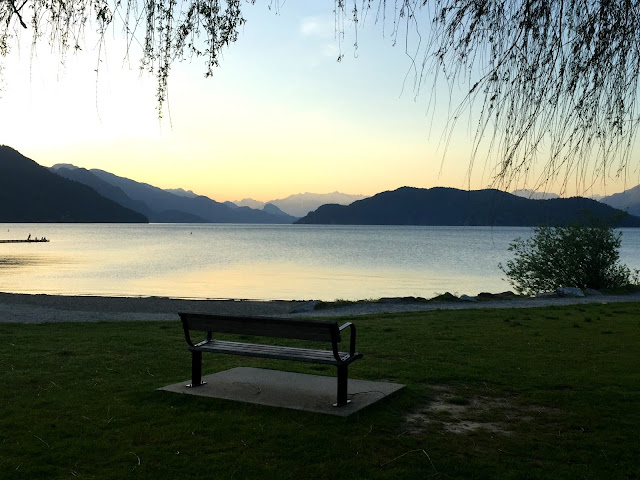 I've taken a few photos here over the years.
Quite a few. :)

And then on Sunday afternoon,
with temperatures soaring into the 30's Celsius again... 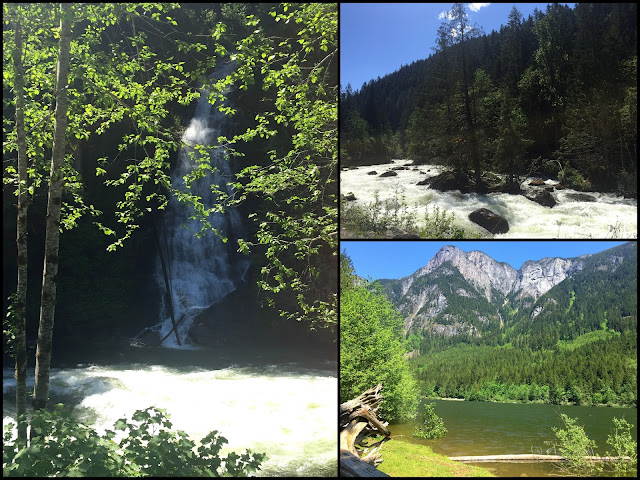 ...we packed up a picnic and headed to Silver Lake near Hope.

It was cooler...
quiet...
and peaceful.
We read books and relaxed. 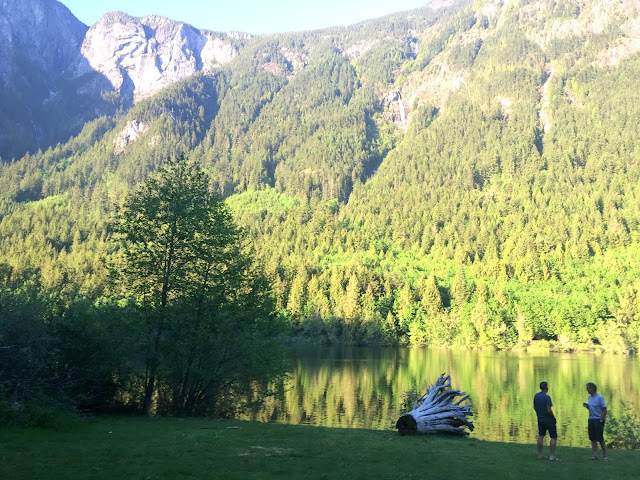 Late in the afternoon...
some friends joined us there.

It was a lovely Sunday in May!

These last few days have been all about trying to get the corn planted on the farm.
About half of it is done...
the rest will happen shortly.
Never before have we planted corn in June.

And that was the month of May 2017 ~ through my lens.
I have much to be thankful for!