Since I will be away at the end of the month and my monthly post will be a little late...
and so much has already happened in August...
I'm posting a mid-month edition! 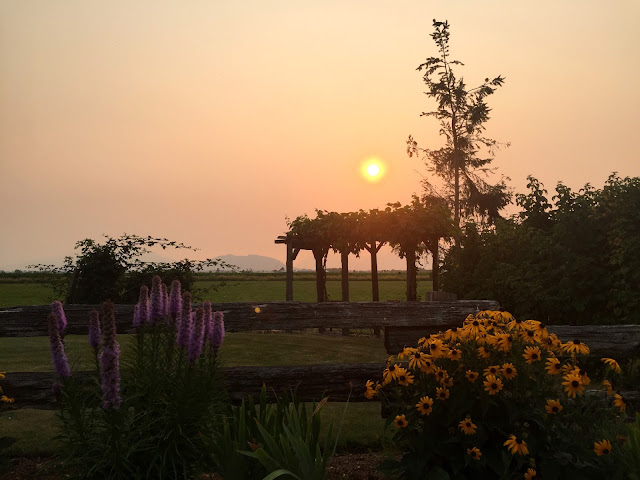 Why not start with smoke?
That's been the story of the month...
and of the summer...
in our part of the country.
B.C. wildfires went crazy this year and tens of thousands of people were forced to leave their homes.
In July we just heard the horrific stories,
but most of the fires were some distance from the valley. 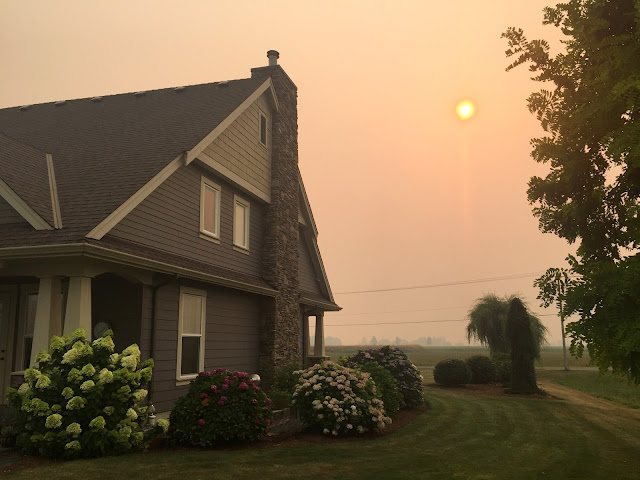 On August 1st the smoke arrived...
the mountains disappeared...
and for the next two weeks we breathed in very unhealthy air.
At the same time, record-breaking hot temperatures arrived as well.
As did my extended family...
from Texas, Iowa, Manitoba and Alberta. 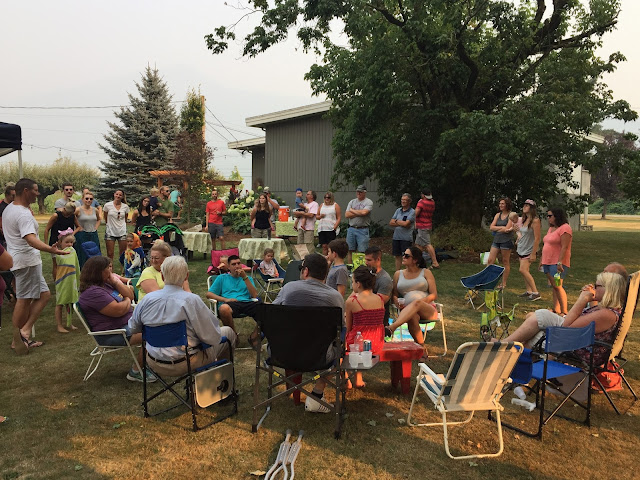 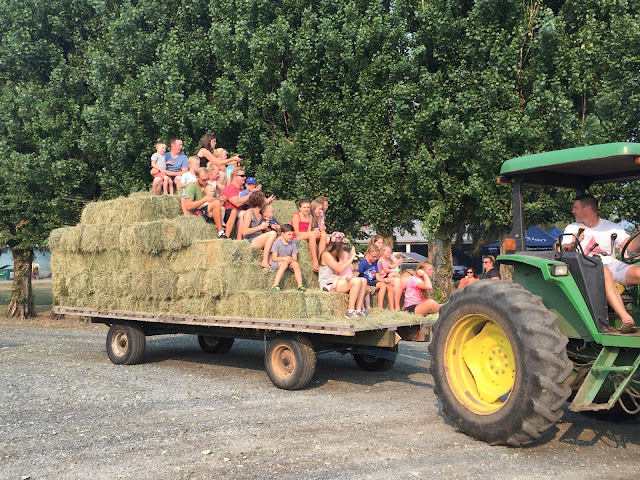 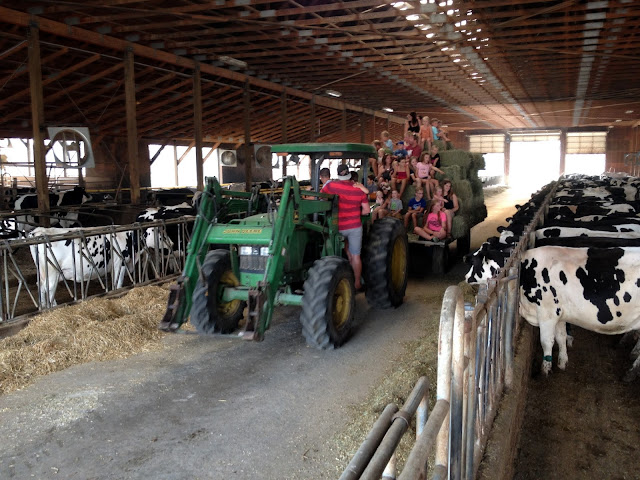 Who knew that touring the farm on a load of hay could be such a hit? 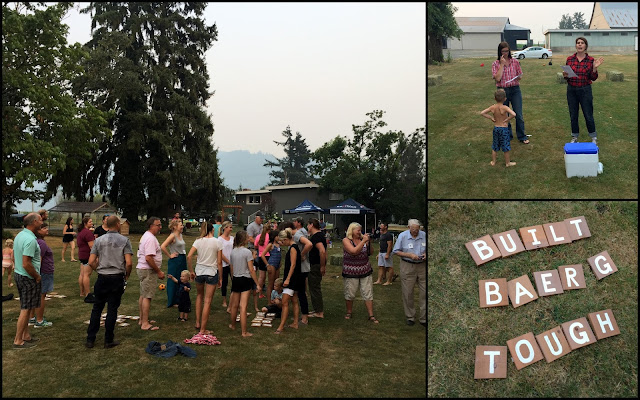 Two of my nieces (Jamie and Lauren) planned games for the entire weekend,
and did such a fabulous job.
We played 'Down on the Farm Amazing Race' that first night...
with teams that spanned the generations.
From milking cows, to throwing eggs, and figuring out our puzzle...
it was a challenge.
My dad (aged 95) somehow managed to be on the winning team. 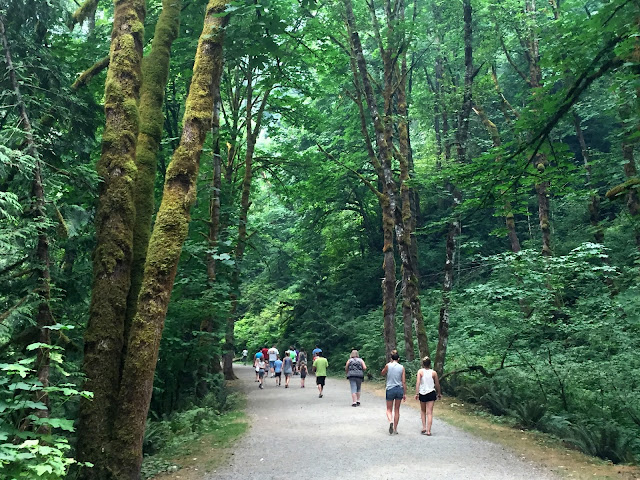 The following morning, we all met for a hike to Othello Tunnels in Hope. 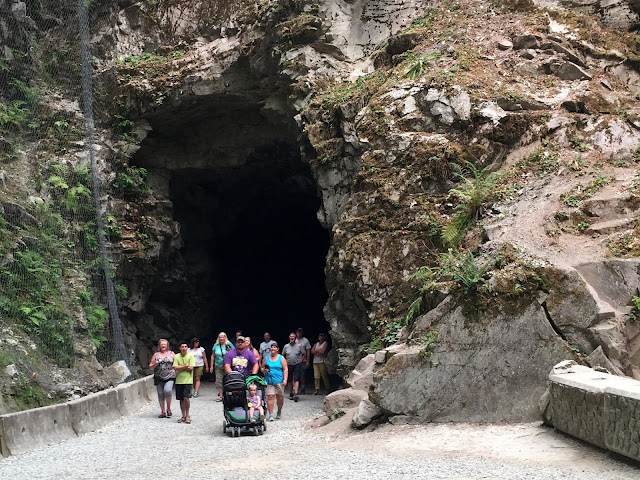 The tunnels are quite an amazing part of  British Columbia history
and fun to visit any time of the year. 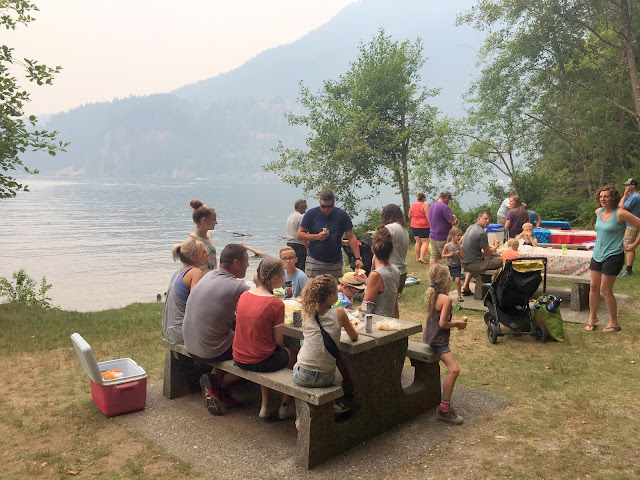 We enjoyed our picnic lunches at Kawkawa Lake in Hope (barely visible through the smoke).. 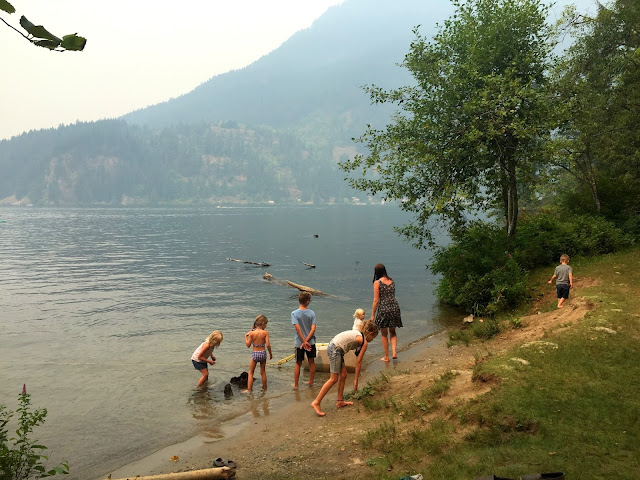 ...and the kids waded in, of course!
They were also collecting snails and plants for a scavenger hunt. 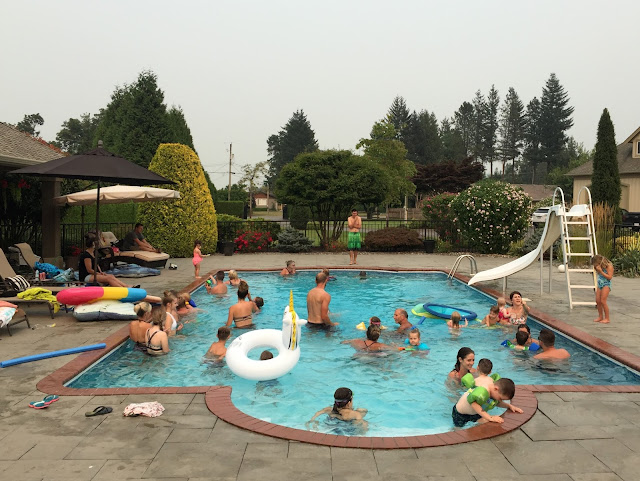 By mid-afternoon, we showed up at Kris and Lina's place.
It was cooking hot and everyone was eager to cool off.
We apparently broke the record for 'the most people in the pool at one time'. :) 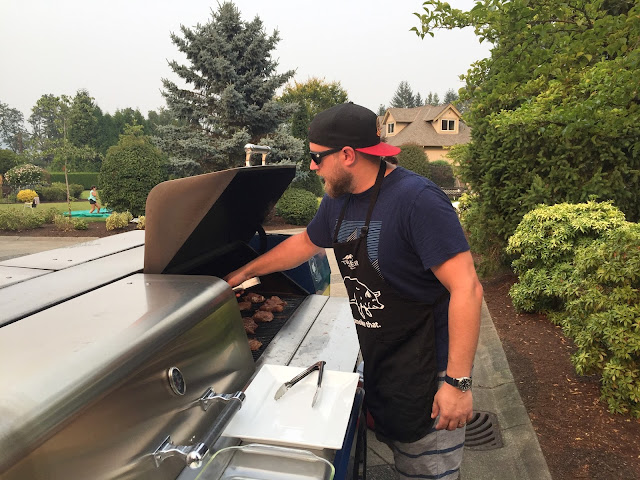 They also have the perfect yard for hosting a BBQ for a crowd!
Lucas (my nephew from Edmonton) agreed to be our chef for the night,
and grilled 60 steaks to perfection.
He loves doing it and he is the best!
If he lived a little closer I would hire him to grill up the meat more often.

On Saturday, some spent the day at the water park...
others hiked the community trail on the eastern hillsides.
(None of us hiked Mt. Cheam peak as originally planned...
due to zero visibility and smoke!)
We all met at Bridal Falls Resort for dinner, pool time, and games.
How was it that we got conned into singing at the Karaoke party later that night?
Let's just say...it was easier singing along to the car stereo 'back in the day'! 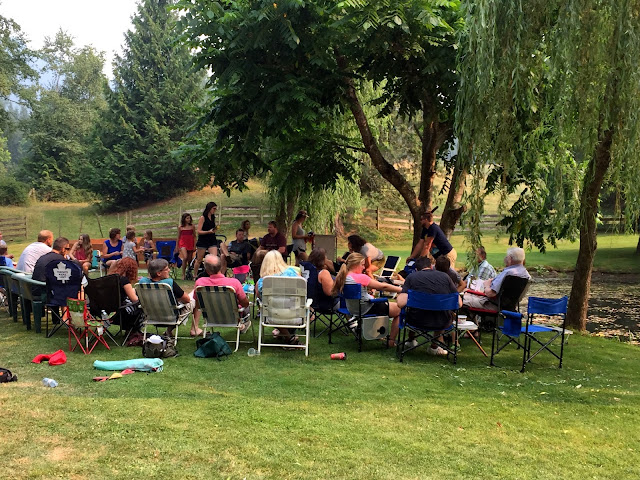 On Sunday we all met at BenAnna Lake for the day.
We started with a church service...singing and sharing.
My brother-in-law shared some stories of how God had been there for him in unexplainable ways at numerous occasions throughout his life.
It got us all thinking.
We all have stories to share...
and we should be sharing them. 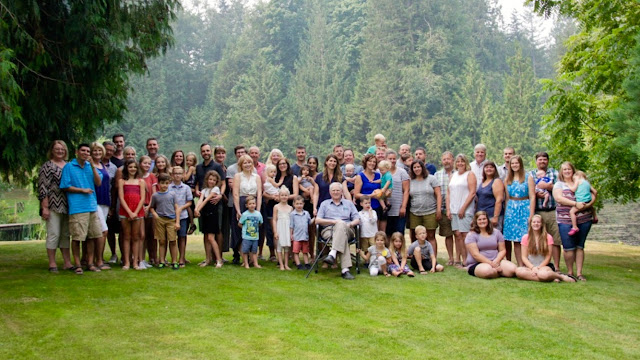 Having this many members of the clan together at one place does not happen often...
a good excuse for some family photos!
Our in-house photographer sent me this one to preview.
Thanks, Lina. 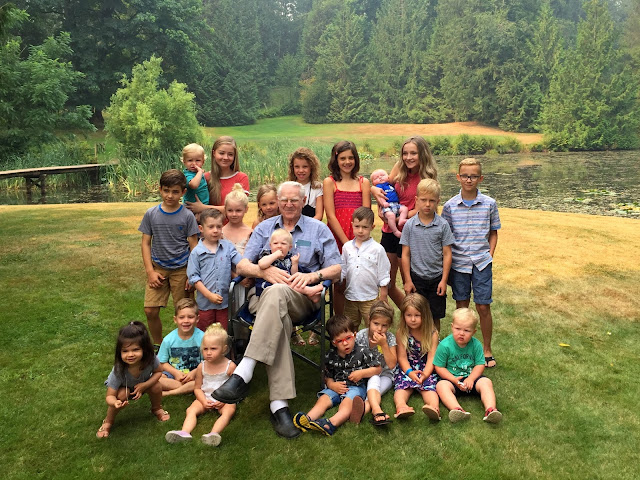 My dad...
with his crowd of great-grandchildren.
Emma is missing from the photo.
No amount of bribery could persuade her to join in. 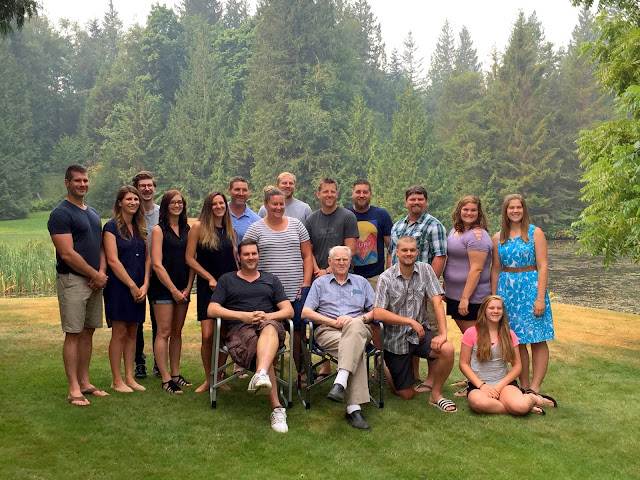 Dad...with his grands.
There are a few missing there as well.
All with good reasons.
Kathryn lives in Australia.
Kaitlyn is at Capernwray in New Zealand.
Kellen is in Winnipeg and couldn't make it to the reunion.
Len stayed at home in Texas...where duty called.
Where's Ricky? 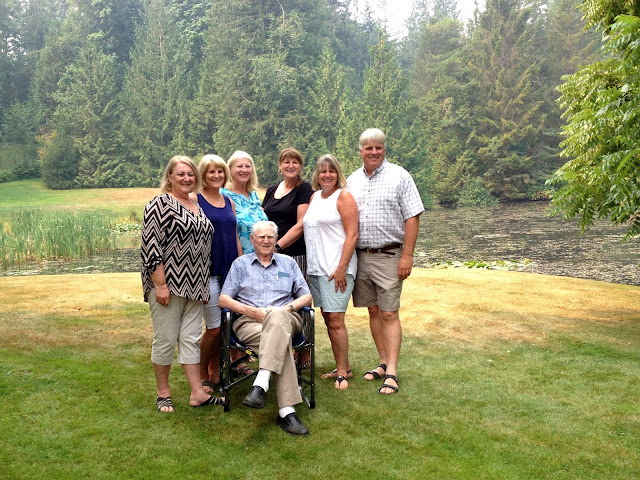 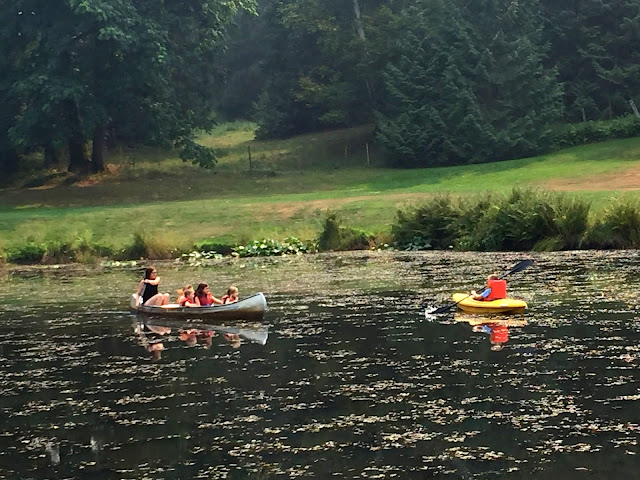 The afternoon was spent paddling...
and just enjoying the beautiful location in good company. 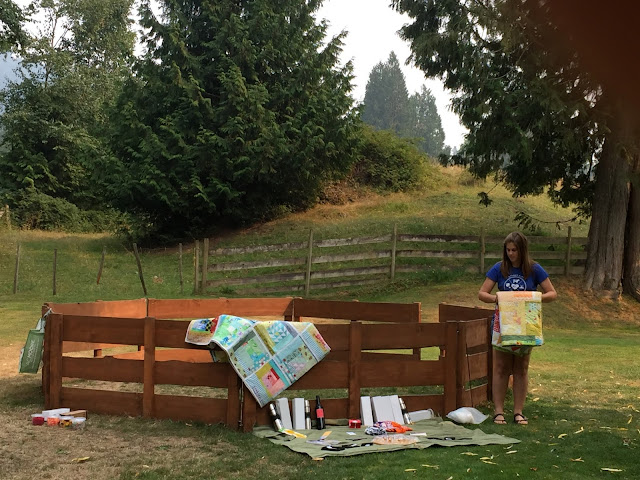 And then there were prizes to be given away!
Kiley was the first one to choose.
Who would not want a 'handmade quilt' by Kathy?
There were plenty of prizes to go around! 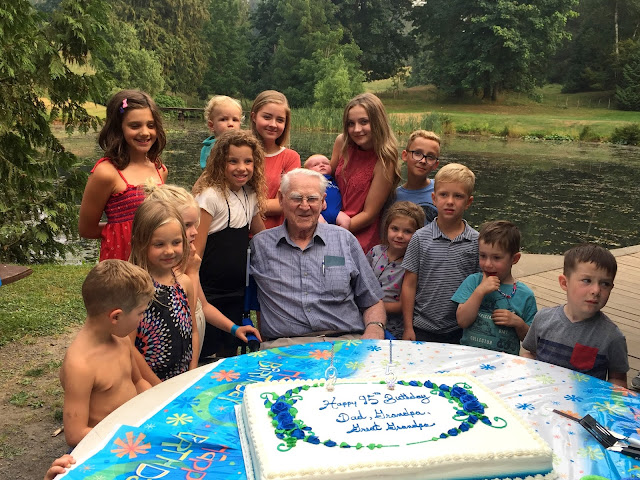 We ended the afternoon with a birthday party for my dad.
Though he won't officially be 95 for a few more weeks...
we thought it was a good time to celebrate while most of his family was 'home'.
How special to have him with us at that ripe old age...
and still able to join us at all our weekend get-togethers.

And on that note we ended four days of activities and togetherness.
Officially.
But unofficially,
we carried on again on Monday.
We had a pizza party at the farm in the evening for all those that were still around.
That was most of the gang. 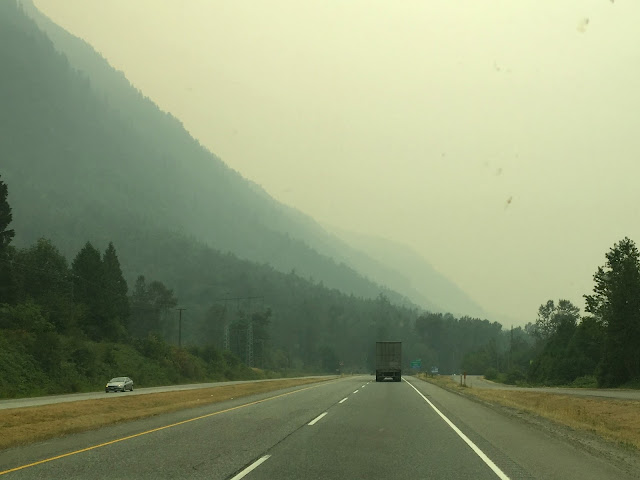 On Tuesday morning the rest left for home...
finding their way through the smog.

Yesterday...
the wind finally blew in from the west and cleared out the smoke. 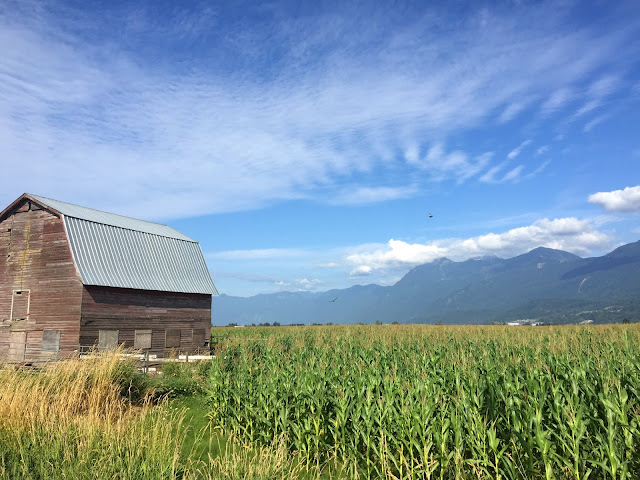 Let me end this post on that 'good note'.