It may not be the end of the month...but I think the flood event of 2021 deserves a post of its own! 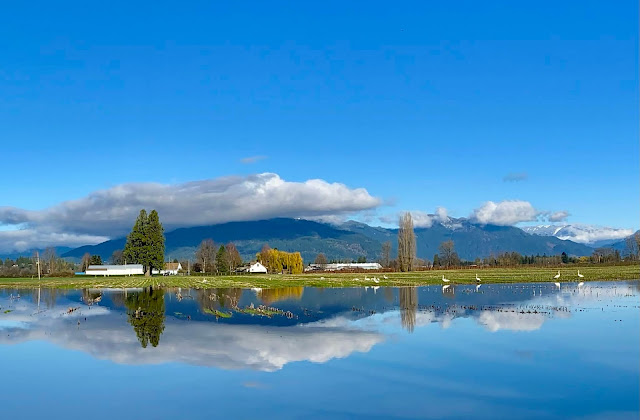 The last few days have been sunny...but he scenes of  trumpeter swans sailing on calm blue waters are not a true reflection of what has happened here in the Fraser Valley this past week.  The 'once-in-a-century storm'. 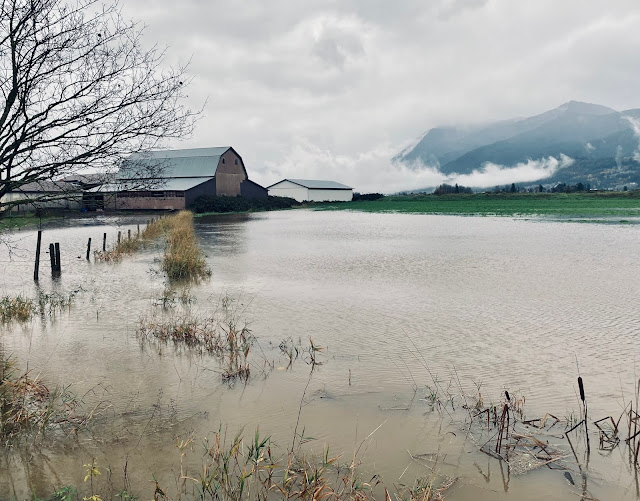 In 48 hours we received close to a foot of rain.  They called it an 'atmospheric river' for good reason.  Highways and railways were washed out.  Mudslides covered roadways and buried vehicles...some lost their lives. I can't begin to describe the devastation but you have all seen the images on the news.  I'll share a few pic's of the impact of the storm in my neighbourhood. 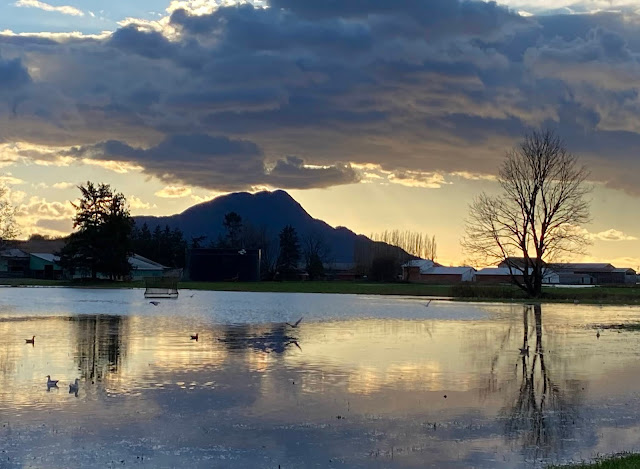 Ditches overflowed and our fields were mostly underwater. We brought in an extra pump to keep the water out of our basement /crawl space.  And then we brought in a bigger pump....but not before we had a lake downstairs.  Though we had more cold water than we knew what to do with...we had no hot water for several days. We have a new hot water tank now and are thankful! 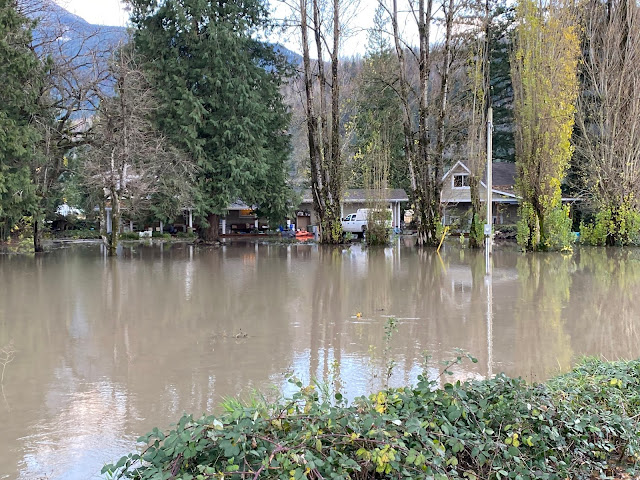 Some homes in our neighbourhood had no access to their house other than by boat. 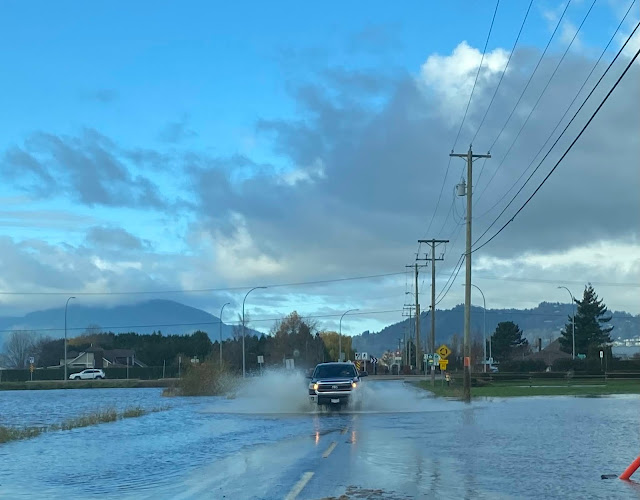 Some roads were closed...others were a little tricky to navigate. 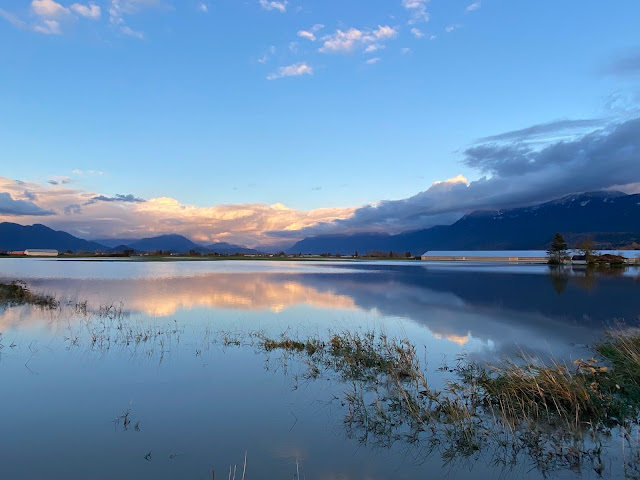 This was my 'front porch view' for a few days early in the week. 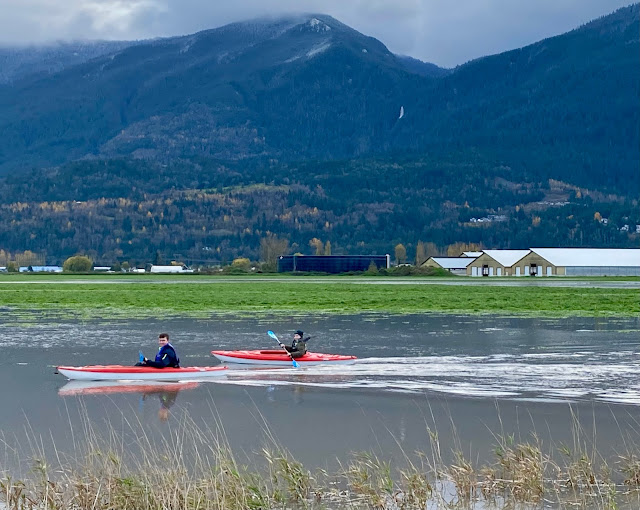 Chilliwack schools closed for the week...but students kept themselves busy. 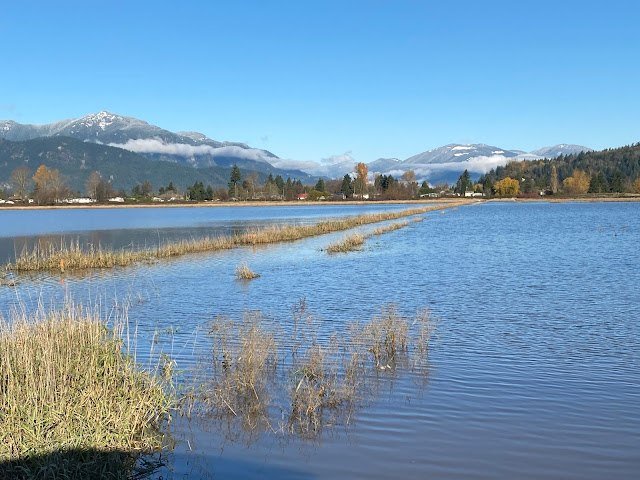 Water flowed from one field to the next...making it impossible to see where the lane ended and the ditch began. 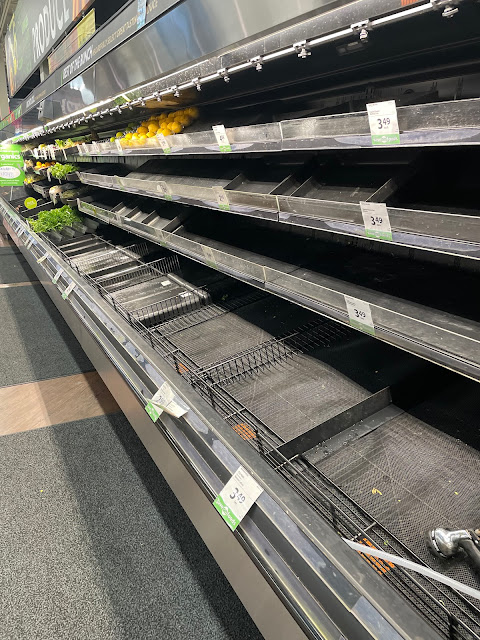 Since highways in and out of our community were all closed...there was no way to bring in supplies. By mid-week the grocery store shelves were bare.  Gas stations had long line-ups and most ran out of fuel. We now have a 30L limit per fill-up and are being asked to travel only for essential purposes. 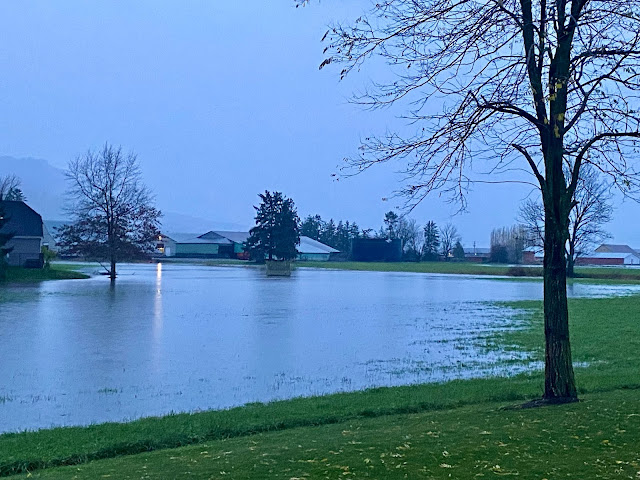 Milk trucks could not get to Chilliwack to pick up milk on the dairy farms.  After dumping milk all week, it was a big relief to have the tanker show up for the scheduled pick-up at the farm yesterday. The cow's grain has been rationed all week as well, since getting grain trucks to the farm was impossible.
Highway 7 on the north side of the Fraser River is is now open allowing for some movement of goods and services, as well as emergency access for medical reasons.  There is also hope that one of the rail lines will be functional by mid-week. Highway 1 remains closed.
It was a hard week but we are counting our blessings.  What we experienced personally was minimal, compared to our many friends and acquaintances that live nearby on the Sumas prairie...where the flooding Nooksack River roared in and created a lake.  Farms are still under many feet of water...and poultry and cattle that could not be evacuated perished.  It has been amazing to see how the community has reached out and worked tirelessly to help all those who have lost their homes and their livelihood. Those who had room took in evacuated cattle...some found crowded quarters here on our farm.  People opened their homes to strangers. Others opened their wallets. This won't be over anytime soon! Our hearts go out to all those who have been hit hard. 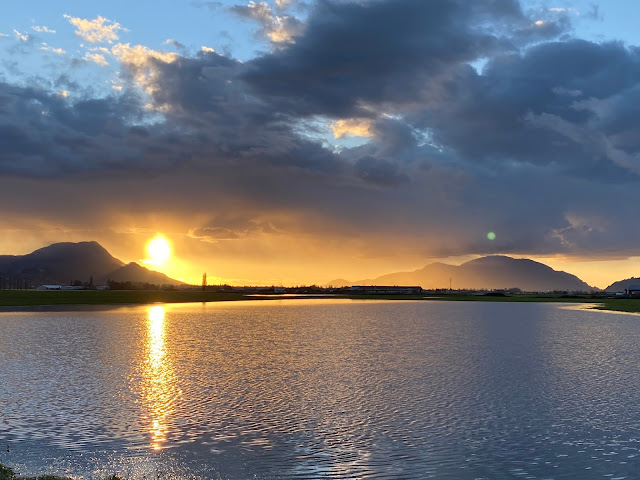 It was good to be in church yesterday...to gather with a family of believers and realize that we are not alone.  We are in this together.
When you’re in over your head, I’ll be there with you.
When you’re in rough waters, you will not go down. ~ God
Isaiah 43:2 The Message