to manitoba and back...

When July came to an end, we were still on the road...returning from a trip to Manitoba.  We seem to have made that trek quite often in recent years!  Now that we are back at home...and in the groove of things once again...I'll share a few memories and moments from our time away. 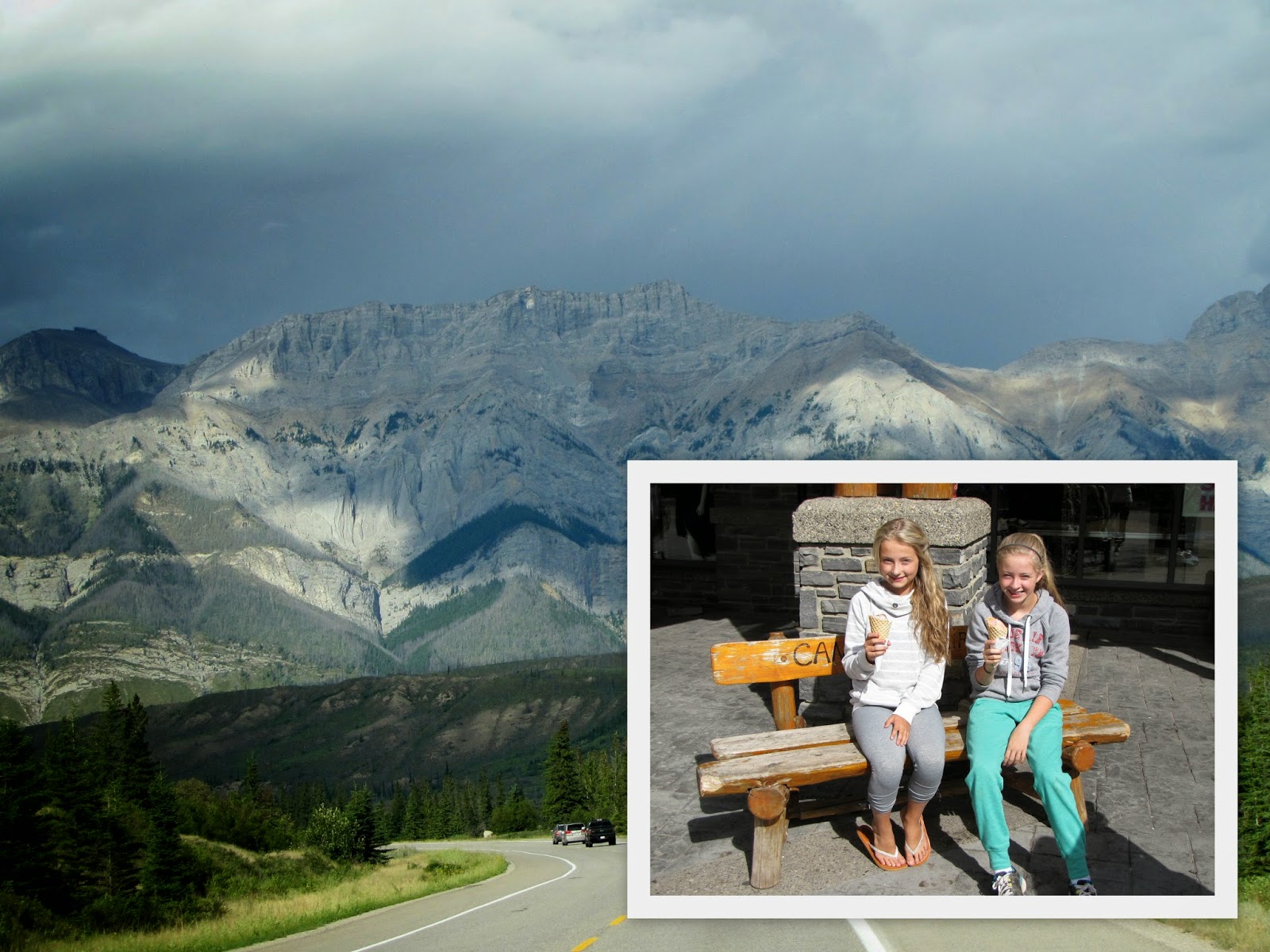 We had company in our motor home for the trip east.  Though the younger grands had all come camping with us the previous week...the oldest two decided they would like to hitch a ride to Manitoba with us...and call that their camping trip for the year.  And what a fun time we had!  Our first stop was in Jasper...where we did a little exploring and had ice-cream. 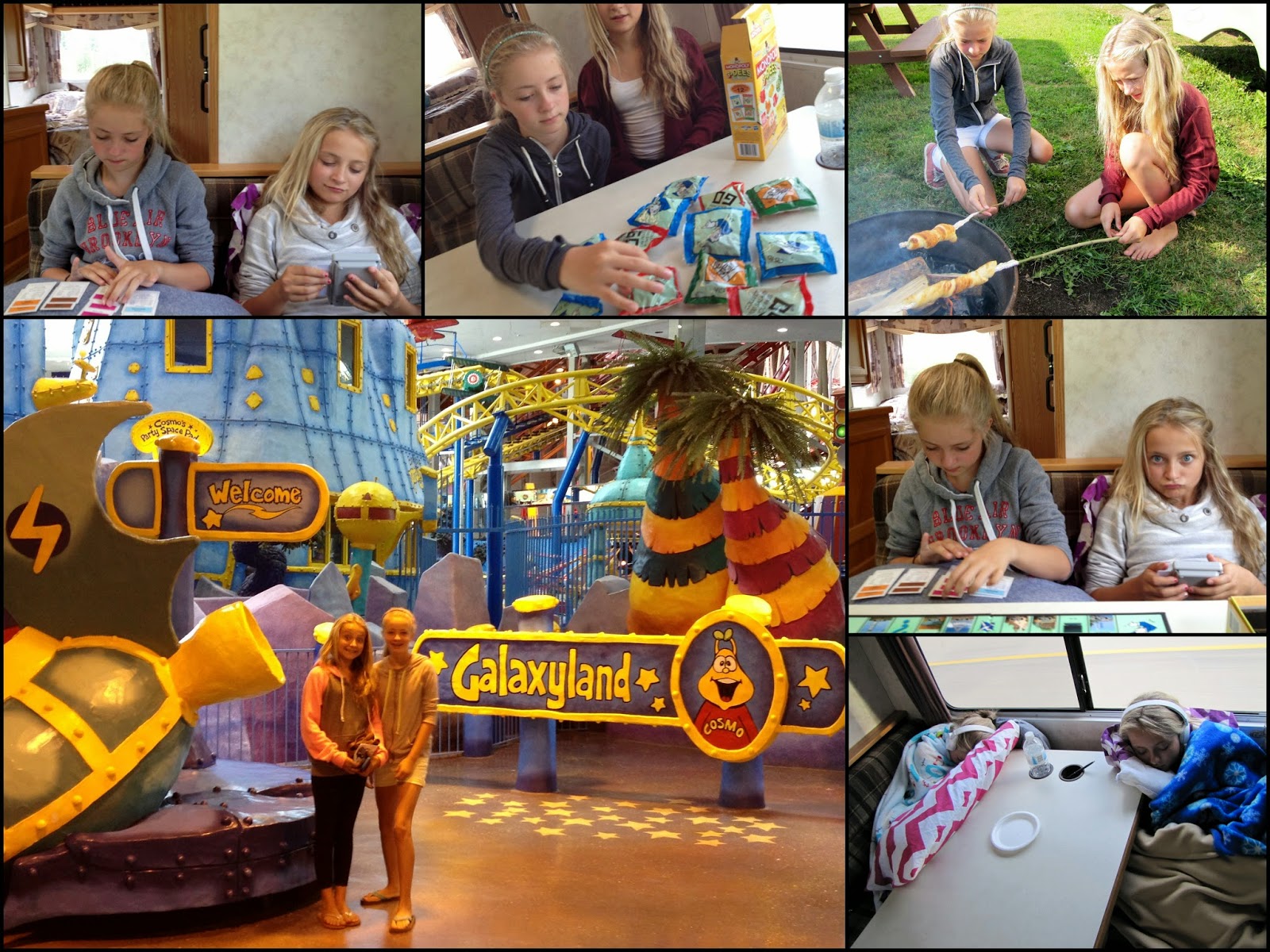 The following day we interrupted our road trip to spend a day at West Edmonton Mall.  Time disappears quickly in the North America's largest mall!  The girls did some shopping...we watched the sea lion show...had a nice lunch together and called it a good day.  Even Grandpa!

As for all those hours in the motor home...we spent them well.  Emme and Spencer decided that Monopoly was a good game for the road...since it takes 'forever' to finish a game.  So we three buckled into the seat belts at the nook and played hours and hours of Monopoly (the 2010 Canadian edition).  We even had Monopoly fruit snacks to eat while we played.  Grandpa put in his 'two cents worth' from the driver's seat on occasion...but for the most part he (and GPS Jane) took care of the driving.  The girls are quite skilled (should I say ruthless?) when it comes to acquiring, developing and mortgaging properties.  I think I need to be on their team next time...not in competition!  And they even managed to catch up on their sleep as we rolled through the prairies. It was a good road trip! 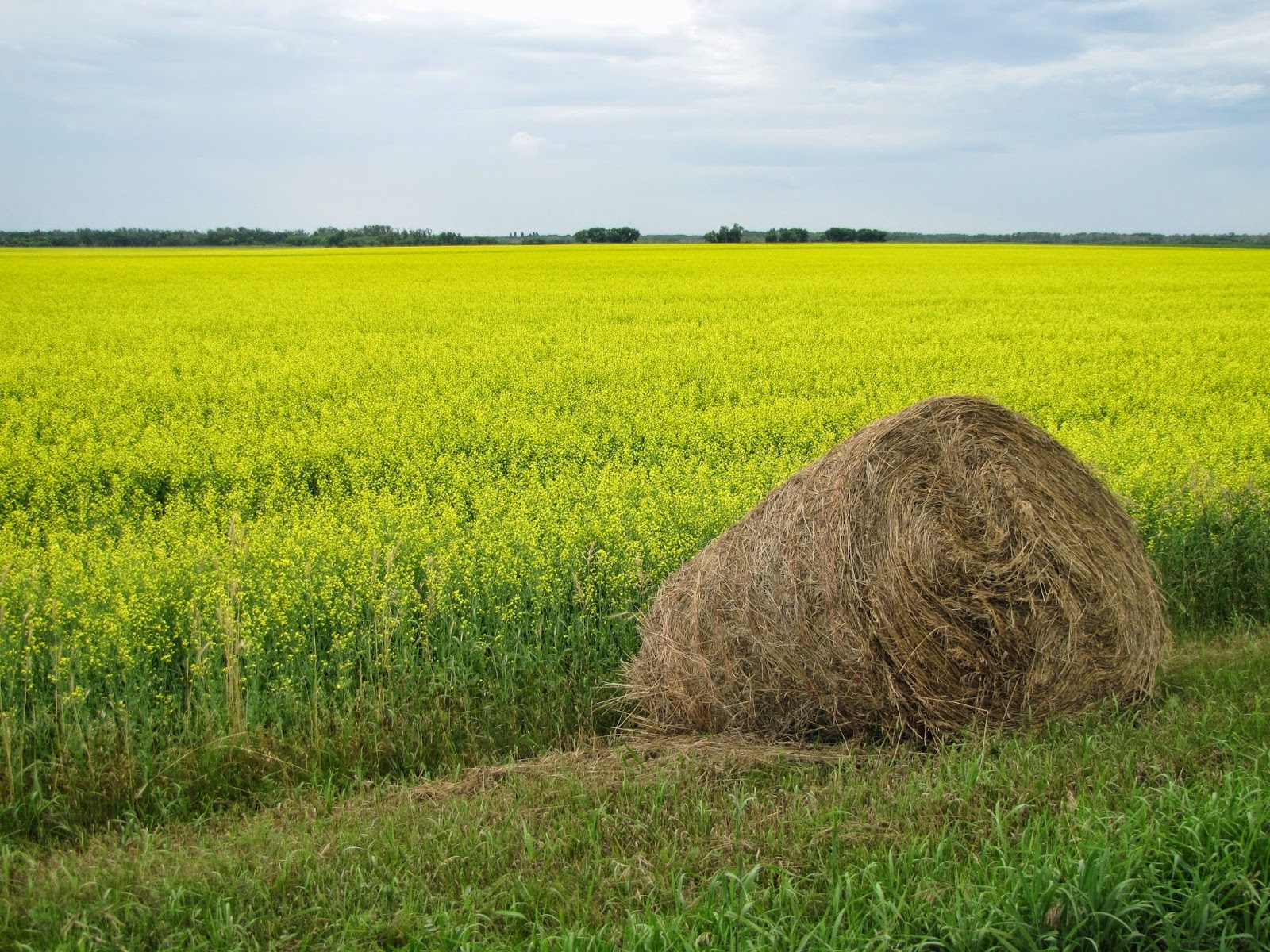 We rolled by mile after mile of yellow canola fields...and just before we reached our destination in Carberry, Manitoba we noticed the crop of choice was potatoes. 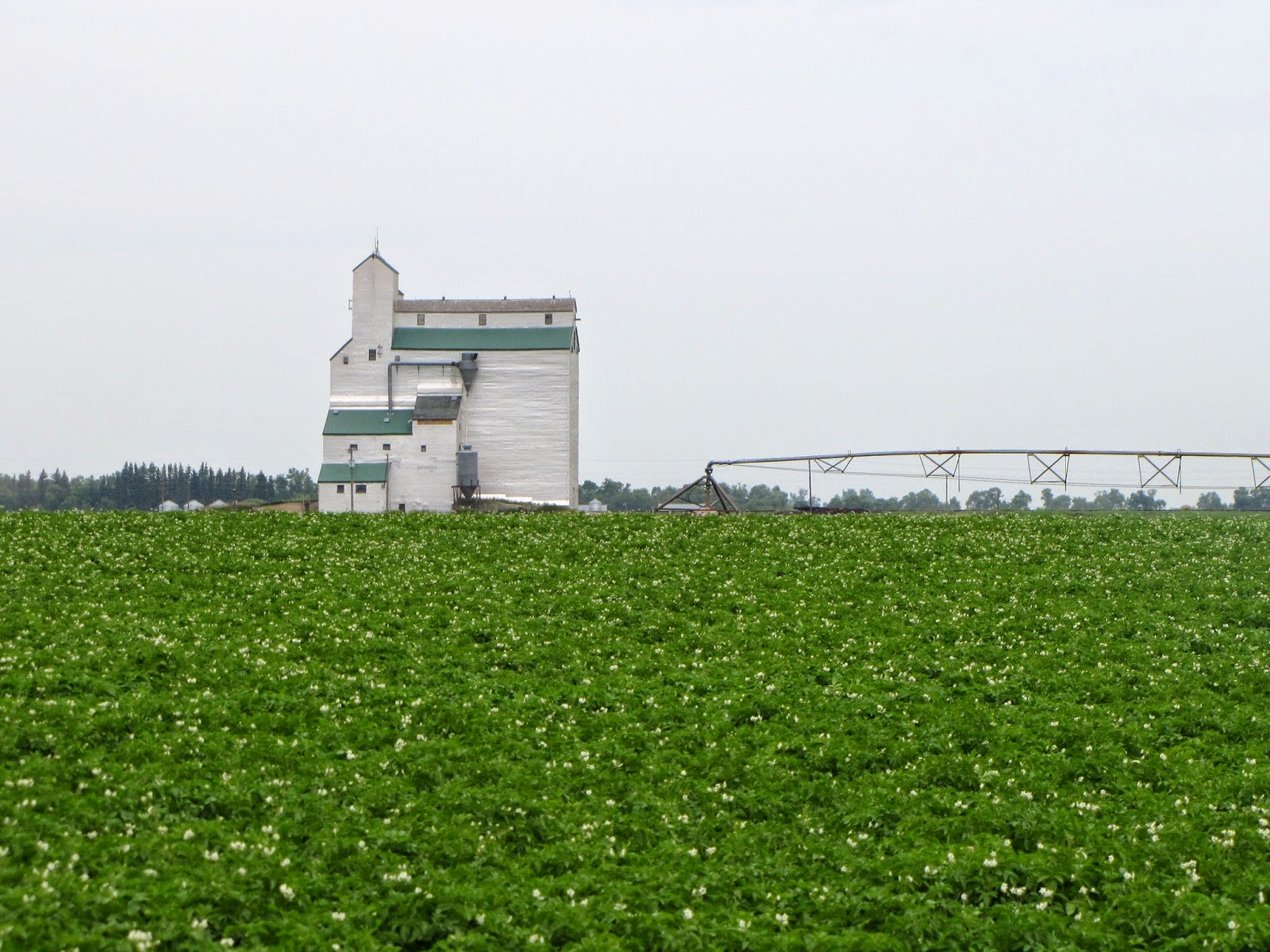 We passed by the Harte elevator (surrounded by a healthy field of potatoes)... 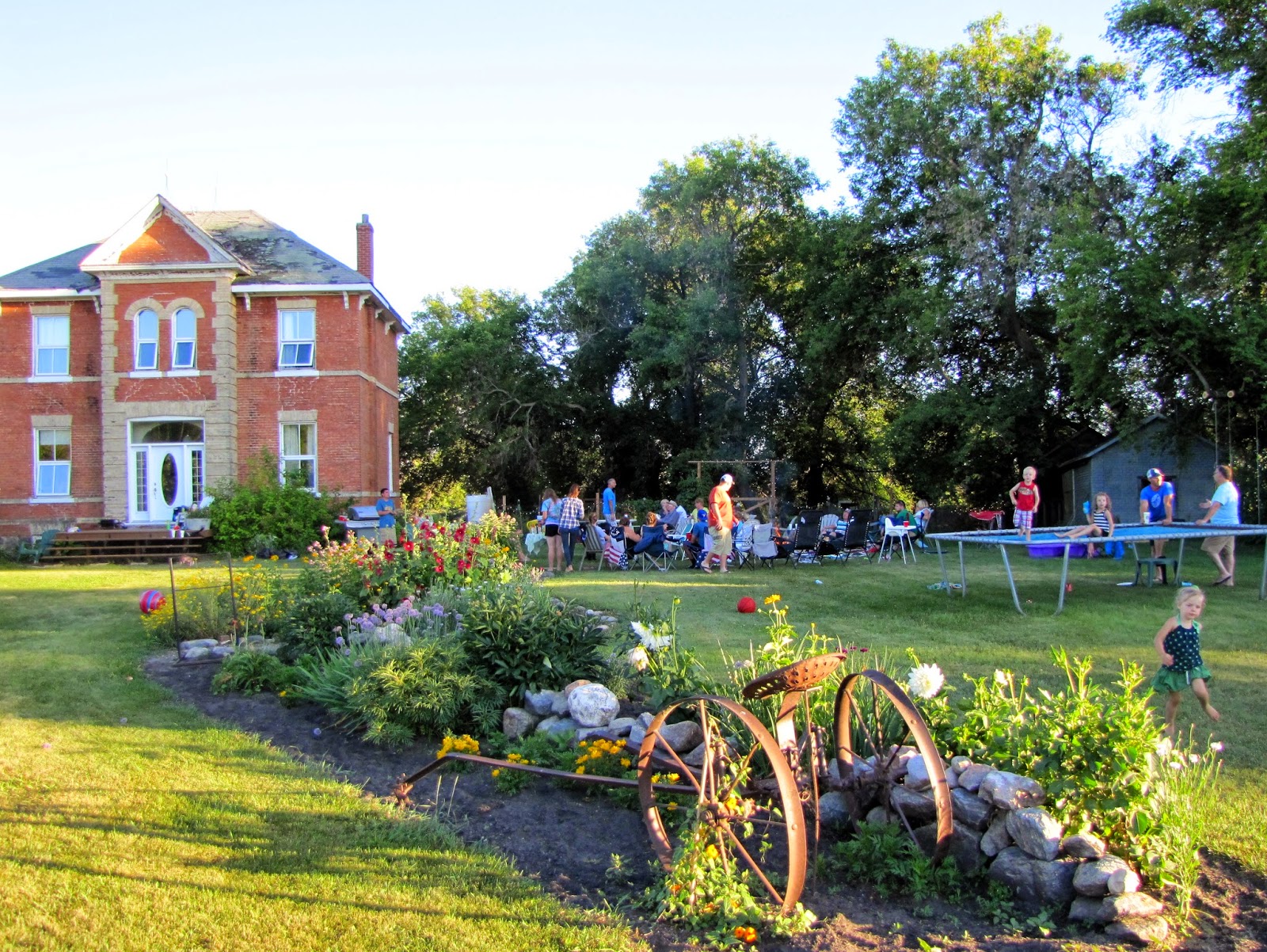 ...and pulled into my sister and brother-in-law's farmyard.  We had arrived...along with a few others!  It was a family reunion...a long time in the planning. Some came by car, some flew...some brought their RV or tent.  We spent a long weekend at Jim and Kathy's...who together with their family had planned the entire event...including bringing in extra trailers and washrooms and organizing all the food.  There were close to close to 50 of us...my dad, all of his children and most of his grandchildren and great-grandchildren. 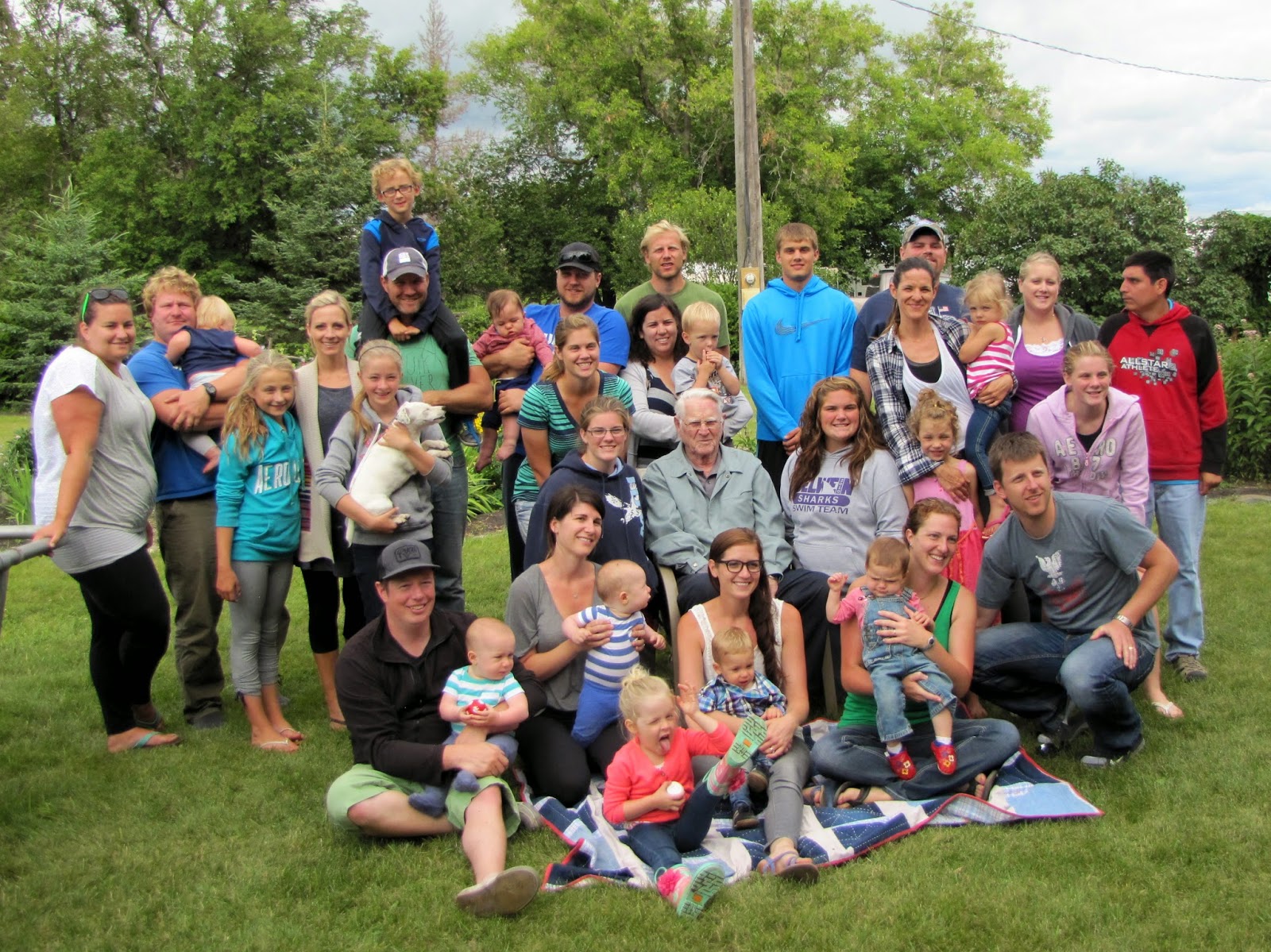 Here he is...surrounded by his grands and great-grands.  Unfortunately, we never thought to take group photos until a few had already left! 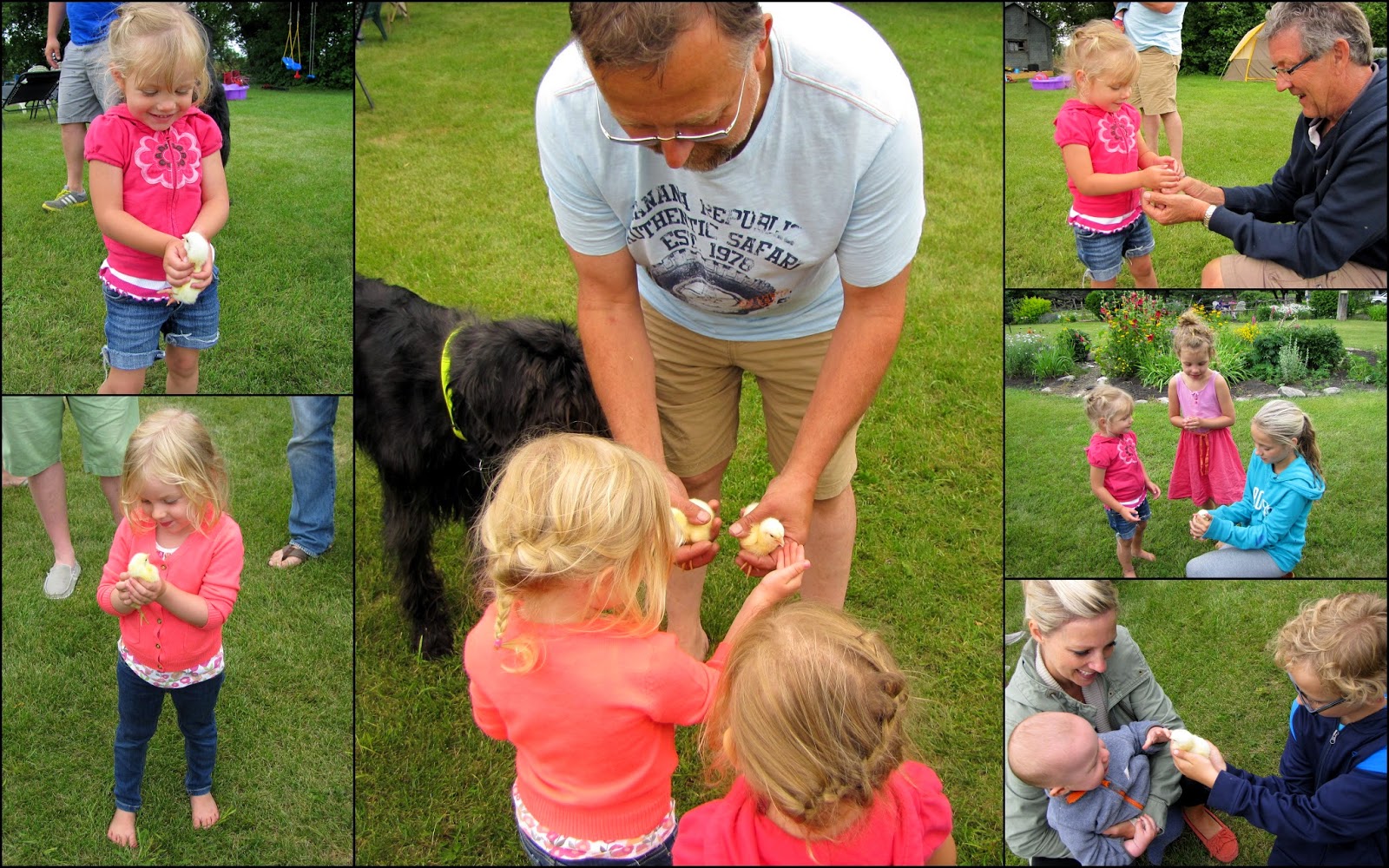 Though it is a dairy operation we were at...if you know my brother-in-law...you know he will have a whole lot more than just cows!  Think 'Old MacDonald's Farm'.  There are pigs, and goats, turkeys and all kinds of fowl.  And the chicks that hatched while we were there were a hit with all the kids. 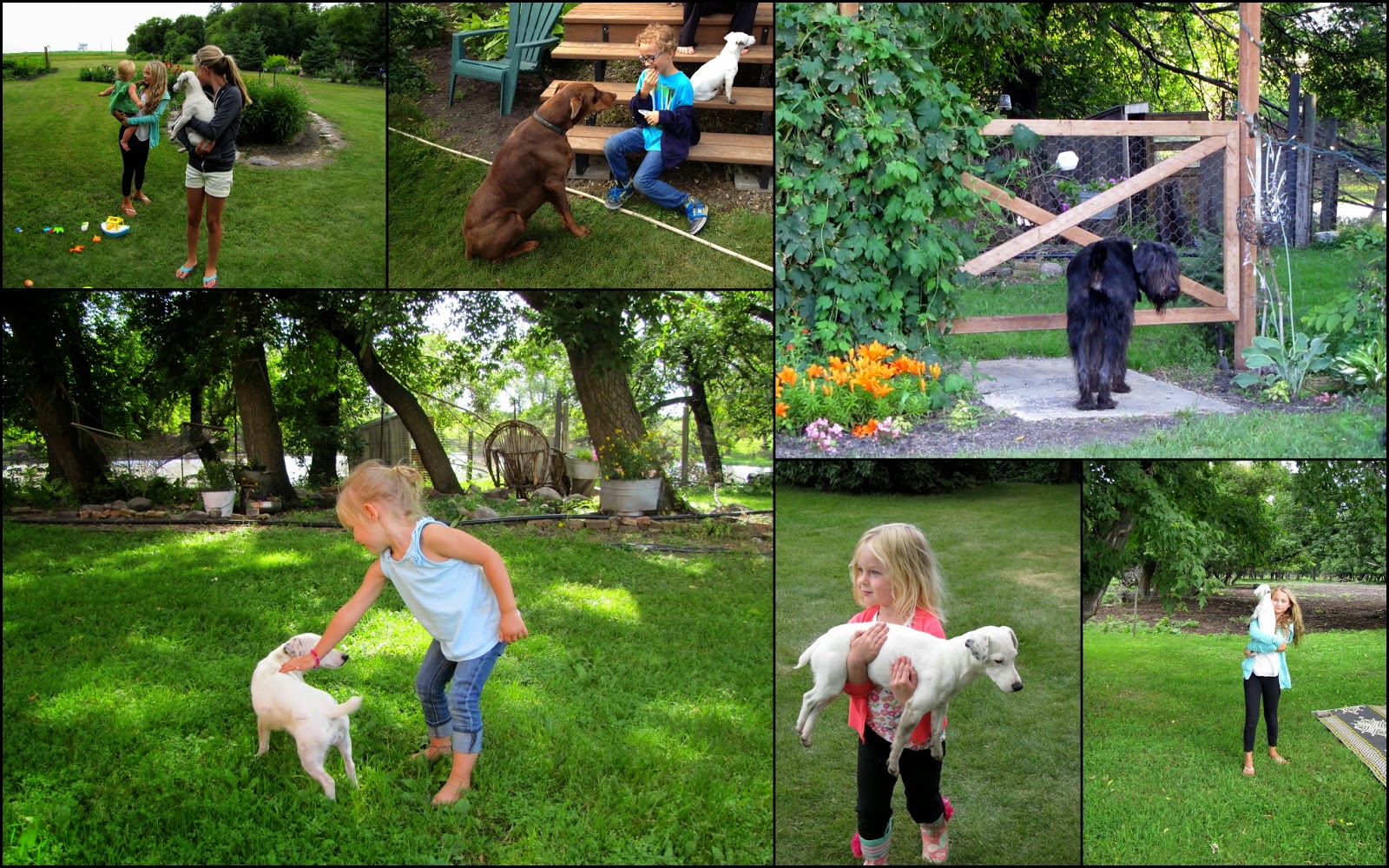 As were the dogs...both the farmyard dogs and the dogs that arrived for the reunion!  My grands threatened to take Molly (the white Jack Russell Terrier) home with them. 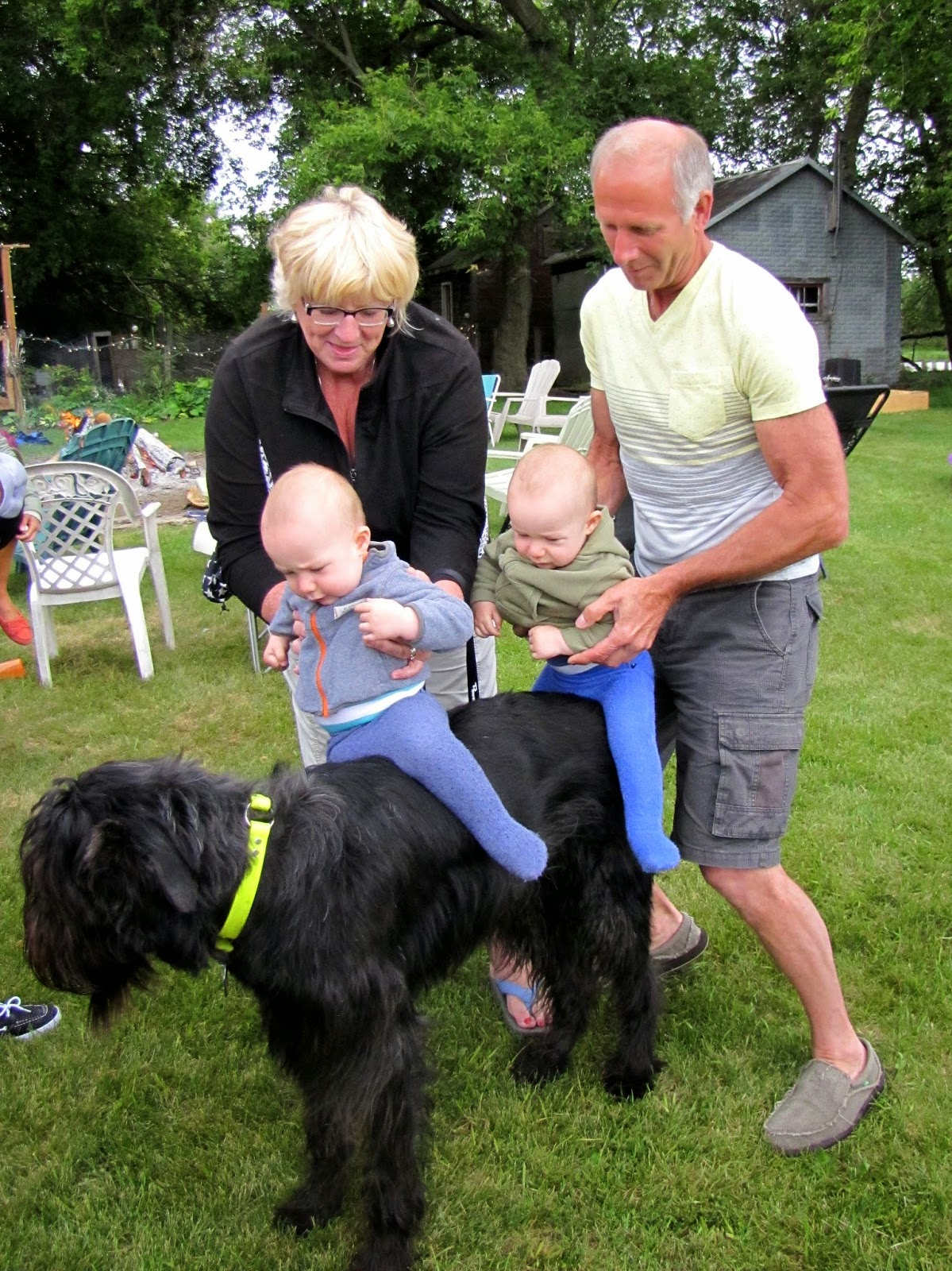 Though there were no ponies for the kiddos to ride...Nikko was about the right size for my twin grand-nephews. 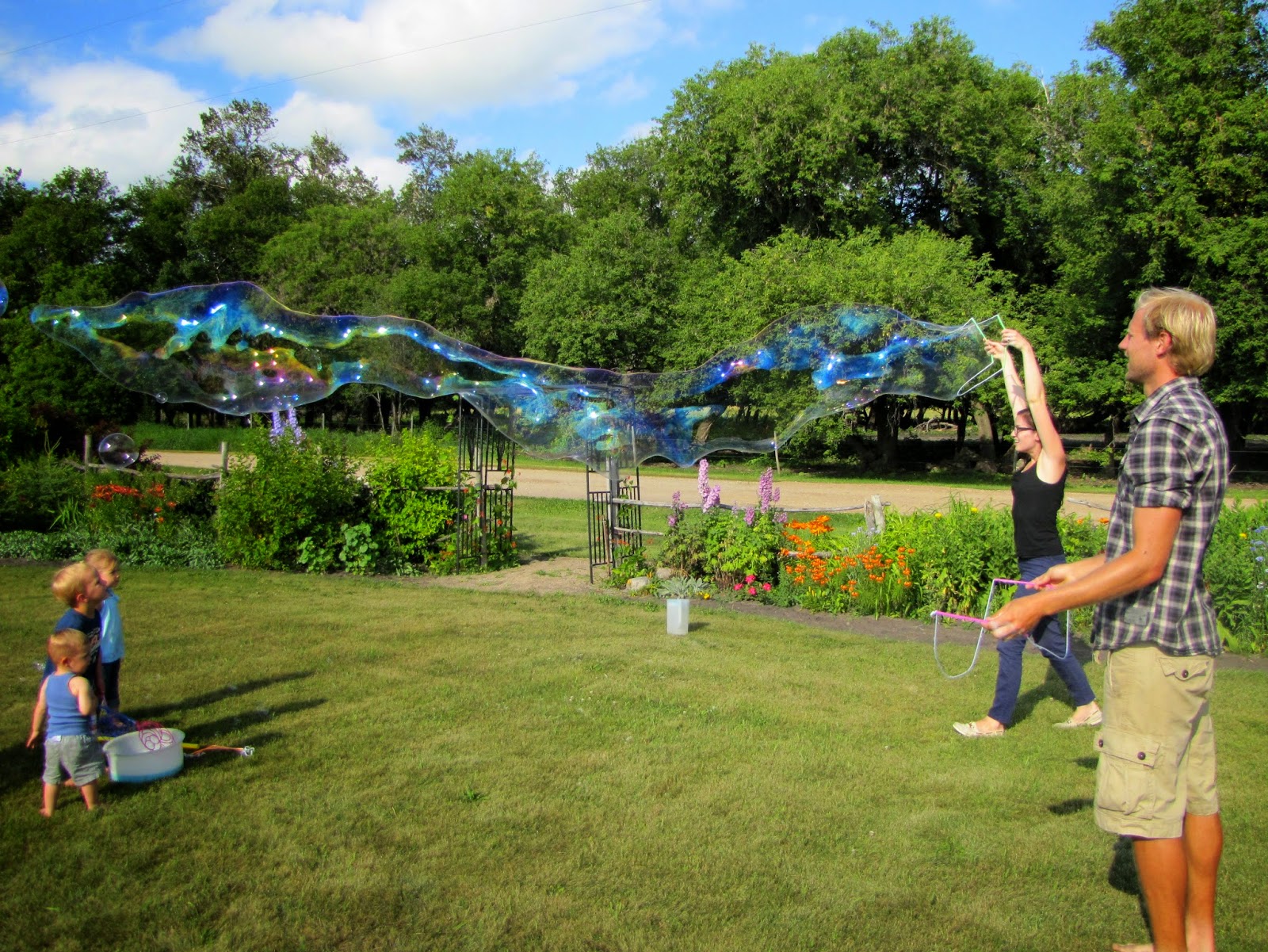 Giant bubbles were a good source of entertainment once again! 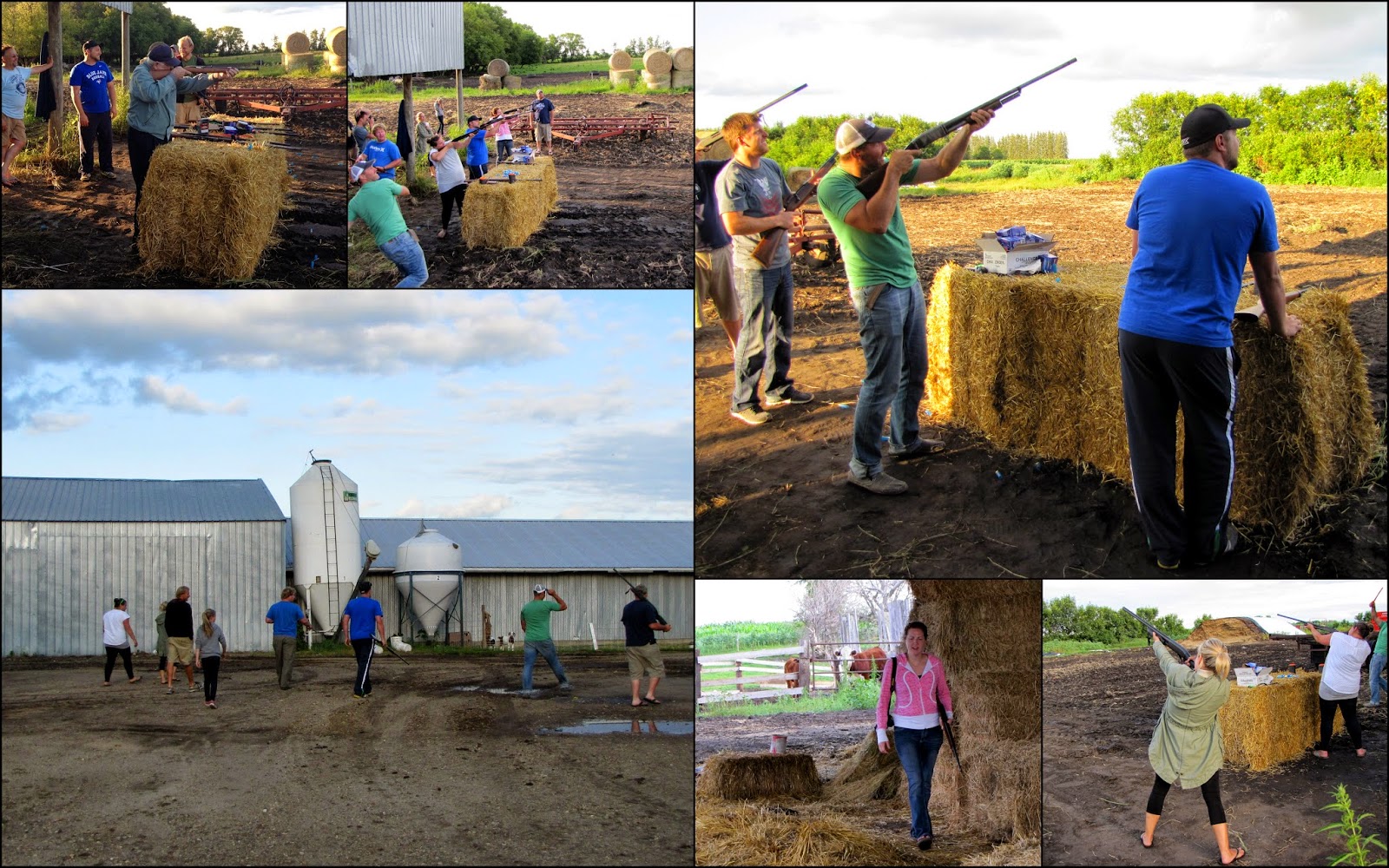 It seems the American cousins brought along their guns...and all the would-be sharp shooters had a chance to try their hand at downing the clay pigeons. Even a few of the girls got in on the fun. 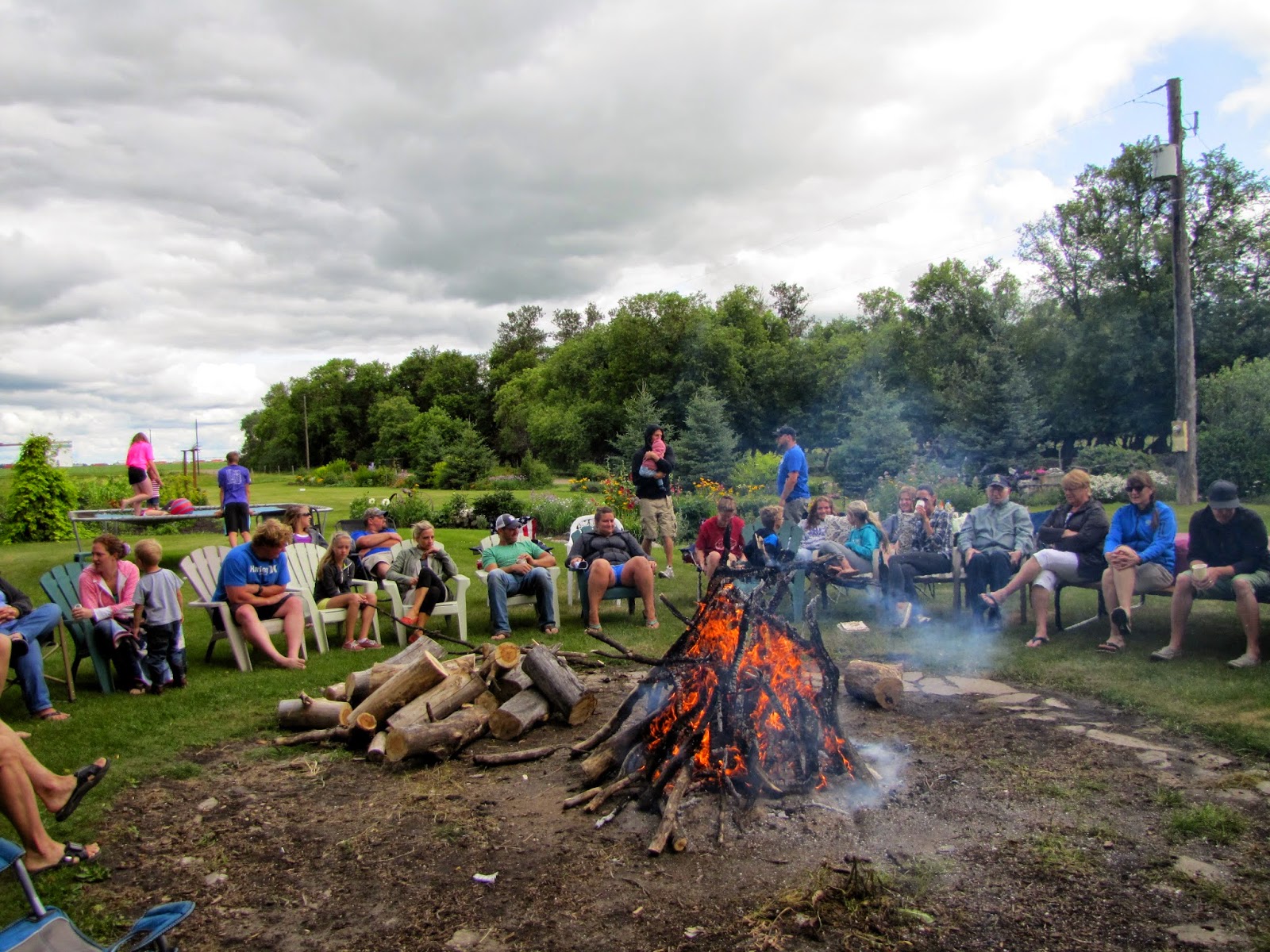 Evenings were spent around the campfire.  Not just any campfire...but a Manitoba sized one! 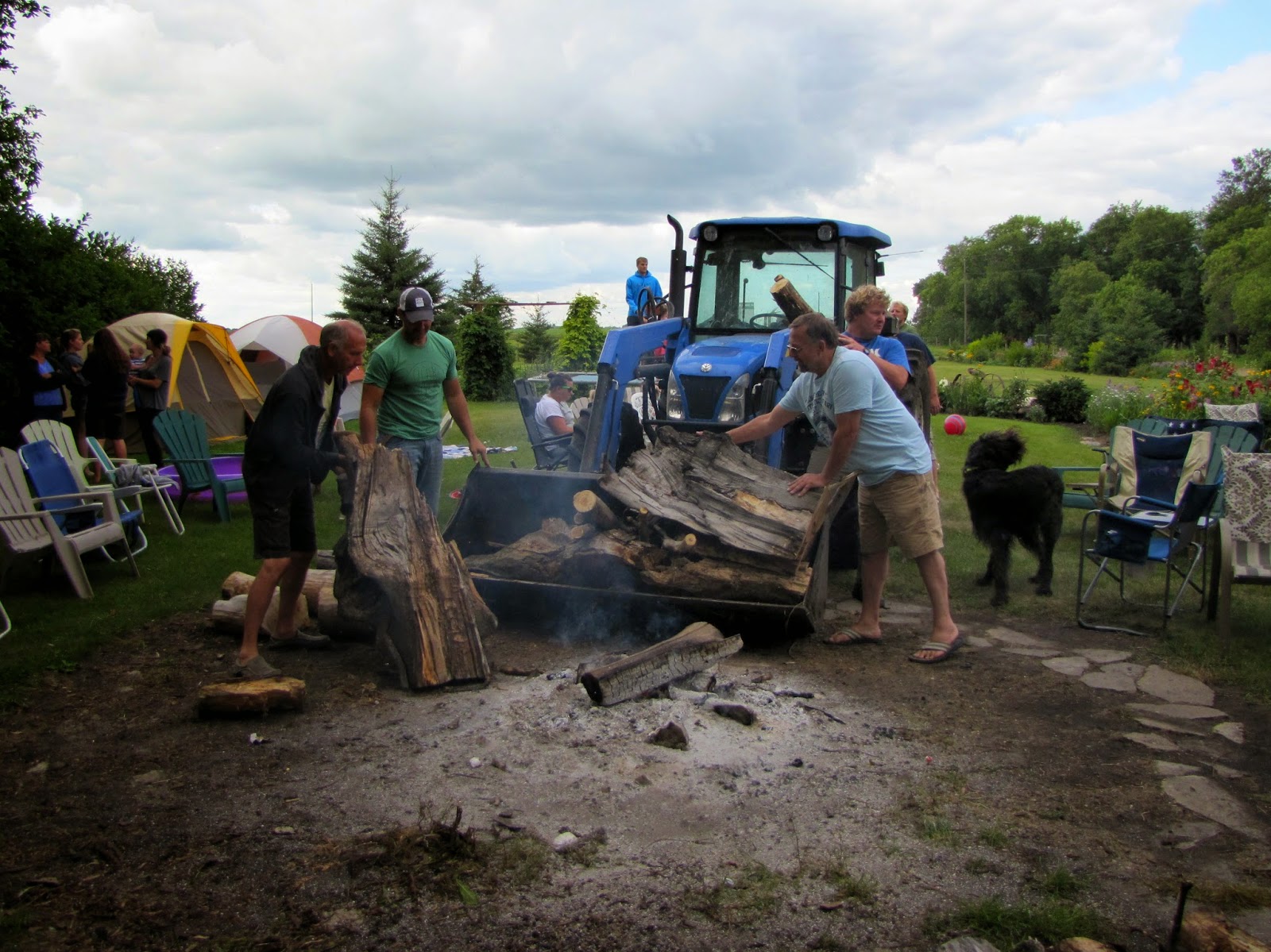 Every day, Jim brought in a fresh supply of firewood from the 'back forty'...enough fuel to keep the fire going until tomorrow!  In the evening we told stories...and heard tales...and played Baerg Family Jeopardy.  (And warded off mosquitoes and flies.) 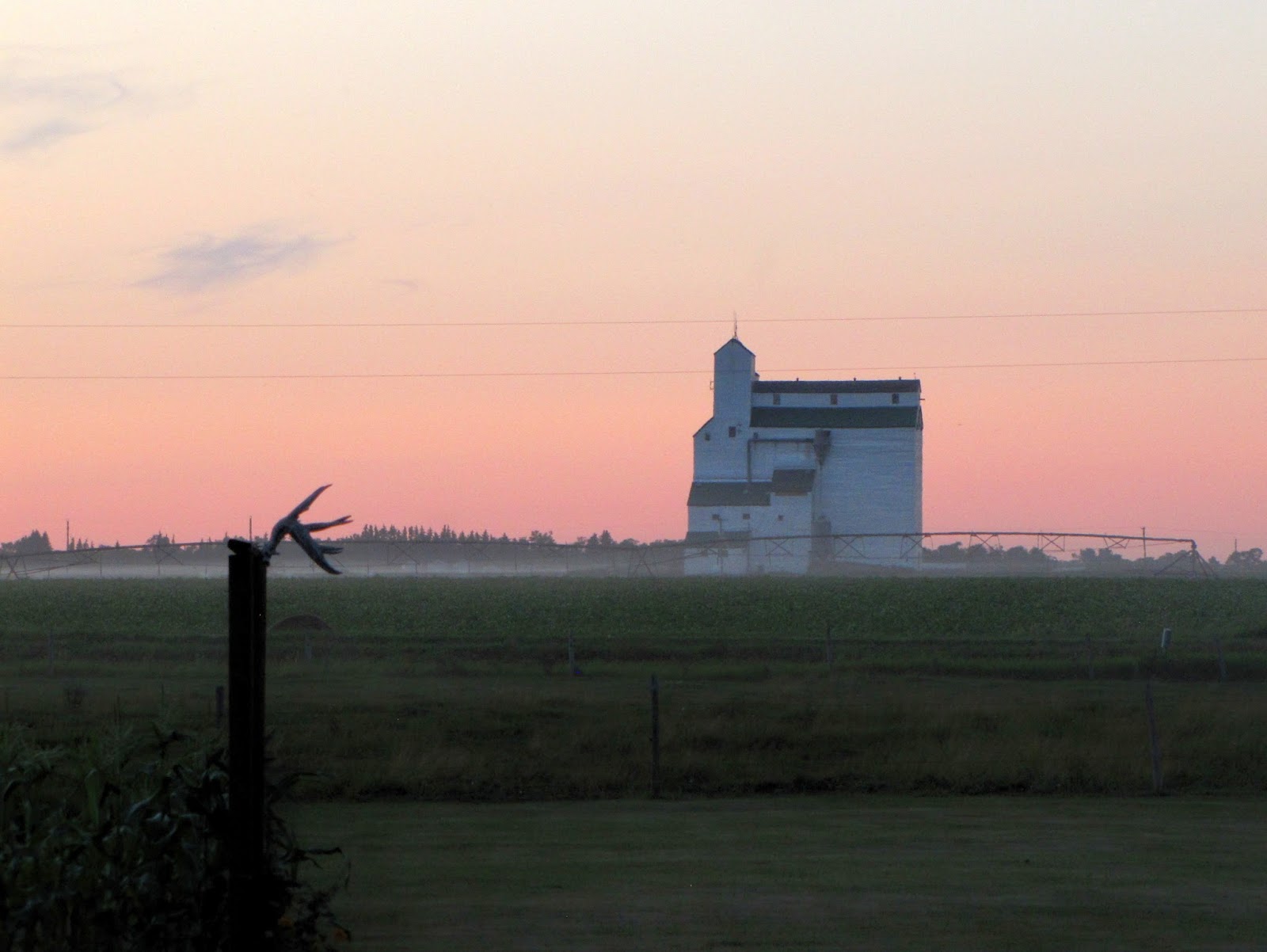 The sun takes a long time to set in the prairies...and midnight usually arrived before we knew it.  It was a good time for four generations to be together! 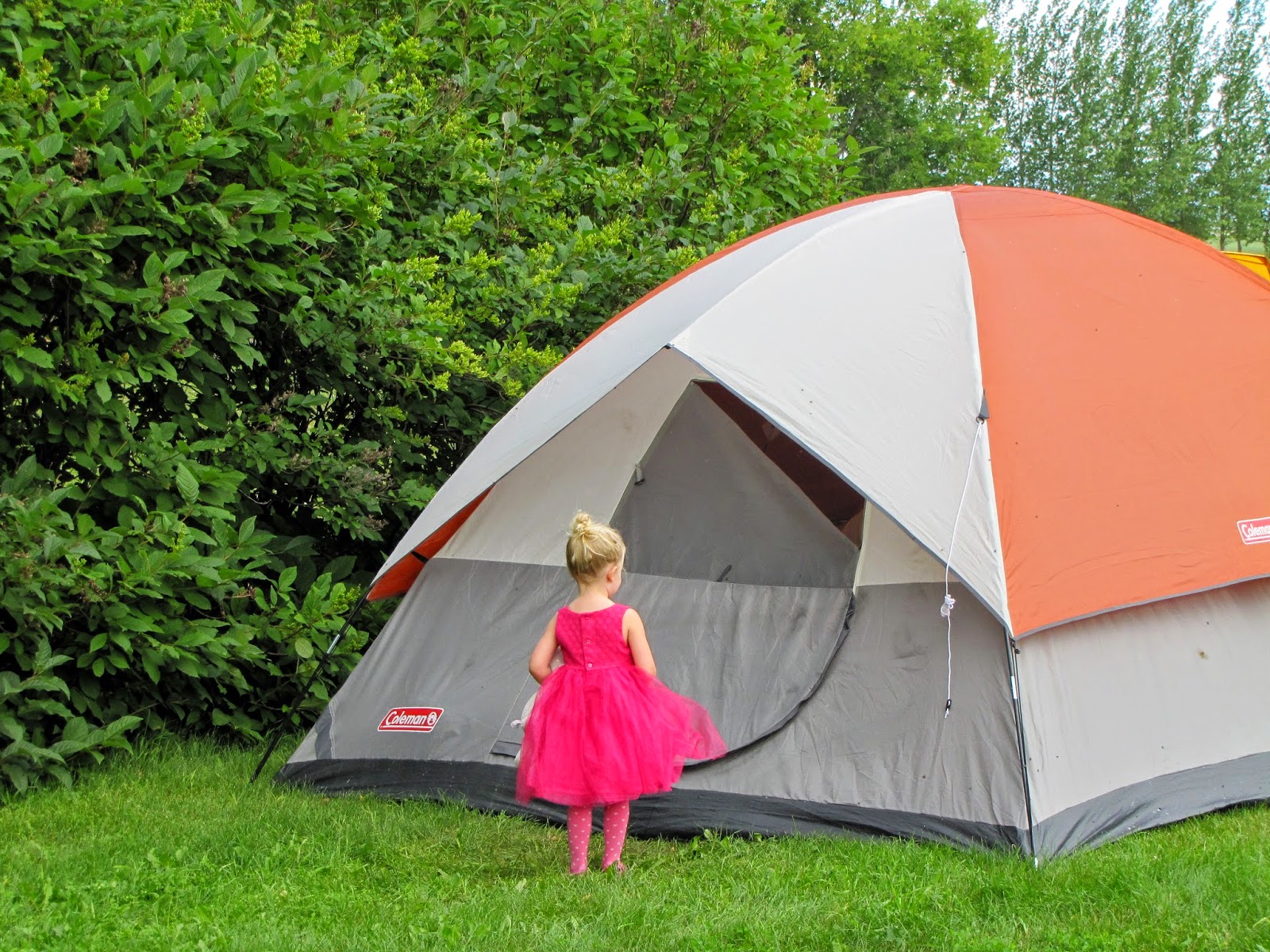 One morning, I saw princess Nola (grand niece) head off to her grandparent's tent.  She thought it was high time they were up...but when all was quiet inside...she sat down to wait.  It made for a great picture!  And here are a few more of my favorite scenes... 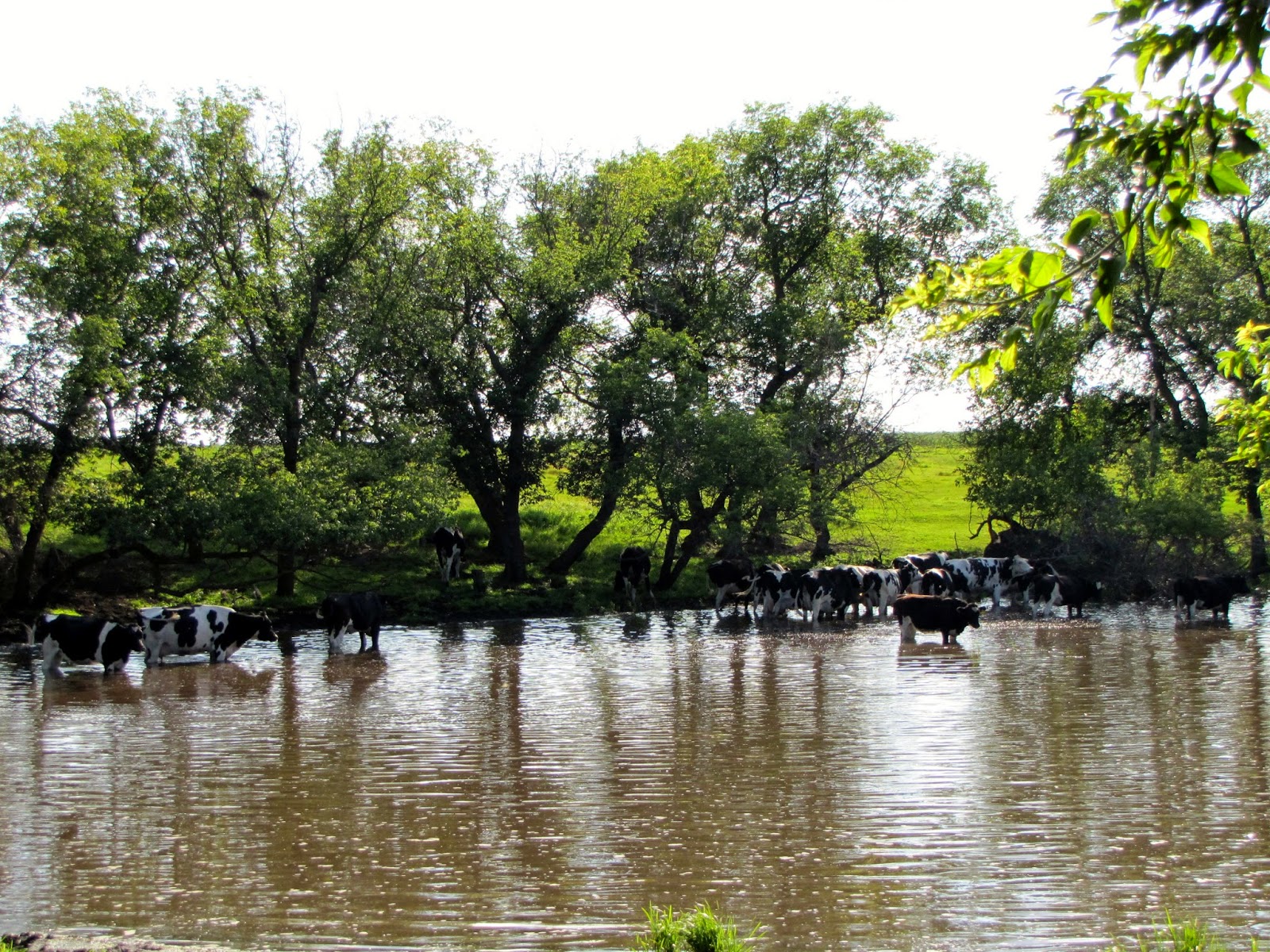 The cattle wading in the backyard pond...a pond that was bigger than ever due to the heavy rains in Manitoba this summer. 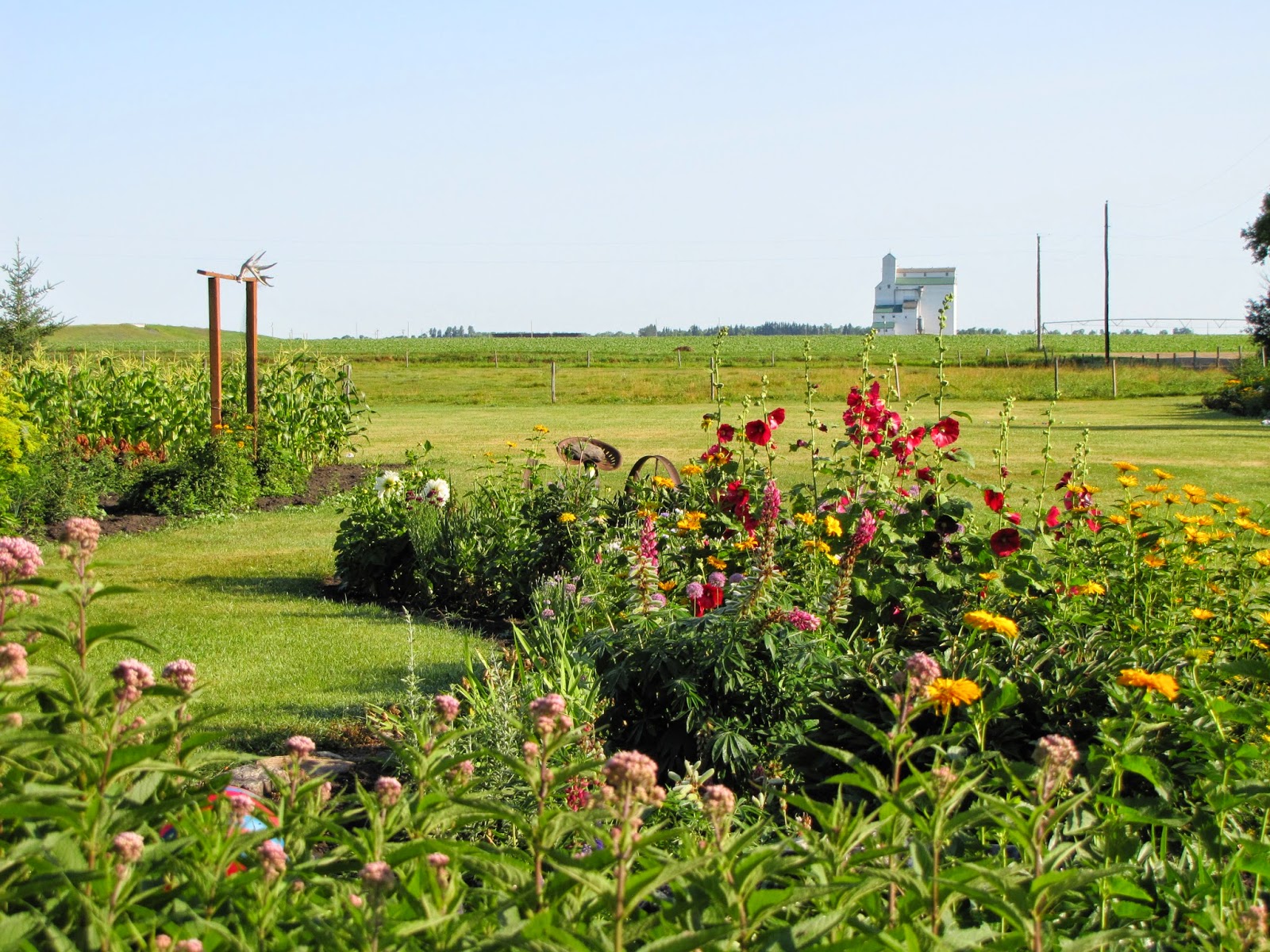 Kathy's flower gardens with the elevator in the distance...taken the morning we left.

Once again...we all went our separate ways.  Some to Texas, some to Iowa...others to Alberta and British Columbia. Thanks to Jim and Kathy and family (especially Gillian) for all your hard work in making this happen!

Our homeward bound trip was somewhat quieter, and a whole lot less entertaining...since we parted ways with our two passengers.  Emme and Spencer flew home from Manitoba with their mom and dad...and we were left on our own.  No more Beach Boys sing-alongs...no more Monopoly games...no more giggles!

Before we left for home...we made a wee detour to meet up with some good friends in Portage la Prairie.  We had lunch together...for hours...and chatted face-to-face rather than on-line as we usually do.  It was another reunion of sorts!  Thanks Char and Betty...for taking the time and effort to make that happen.

From there it was westward...and homeward.  Slowly! 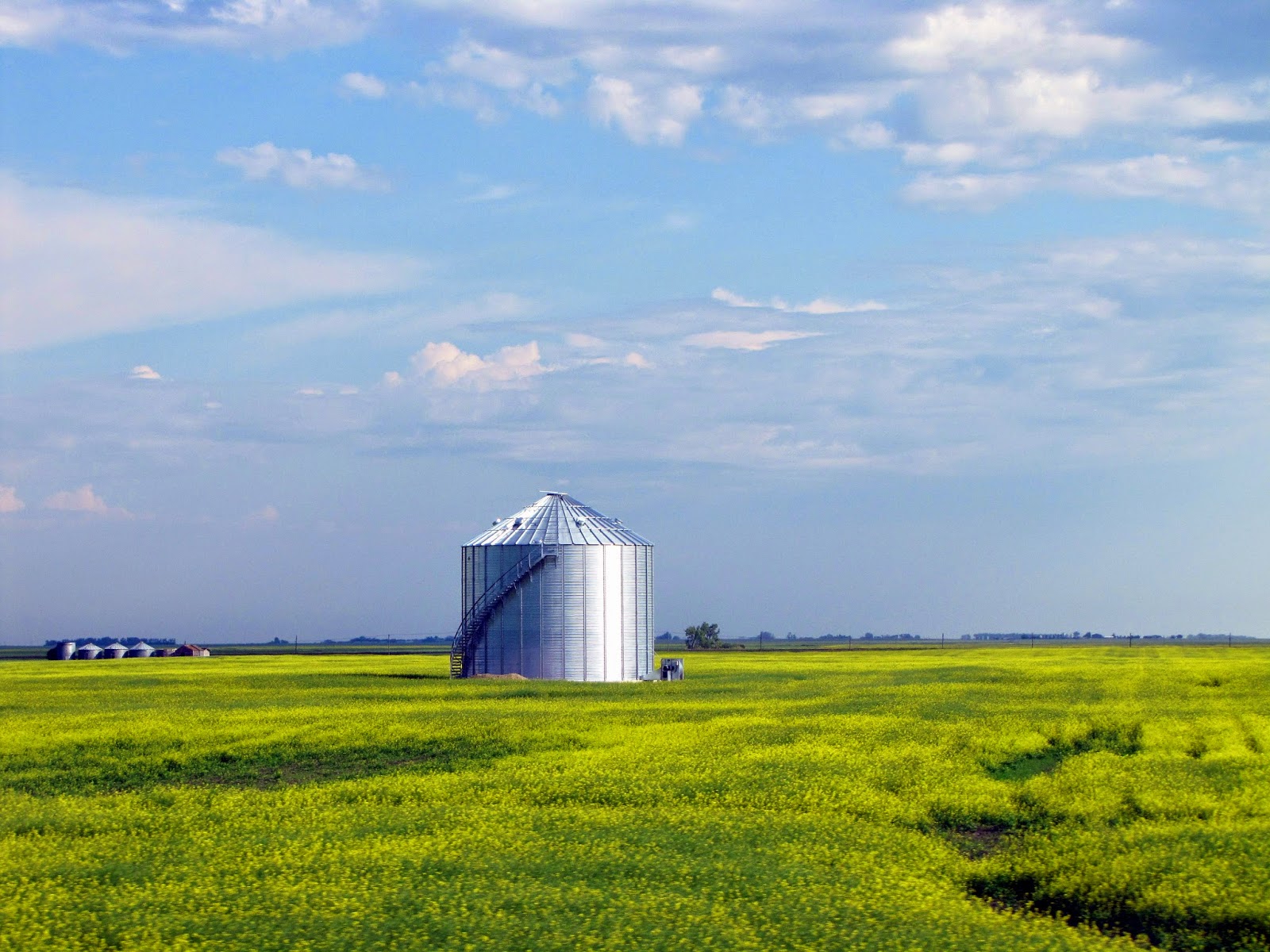 Past the golden fields of canola in southern Saskatchewan... 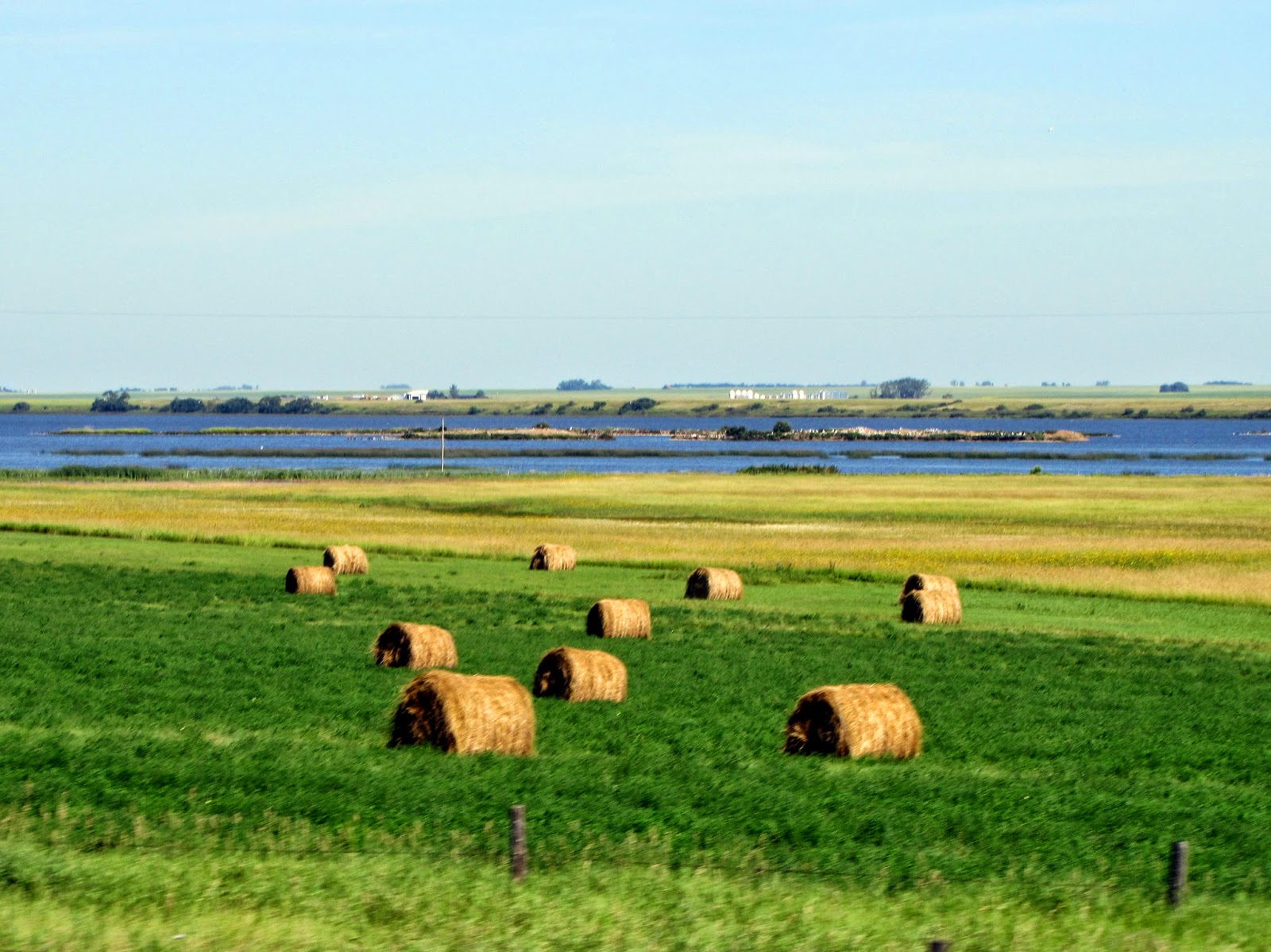 ...as well as the occasional blue flax seed field.  The Canadian prairies have a beauty all their own!


On July 31st we passed through Alberta... 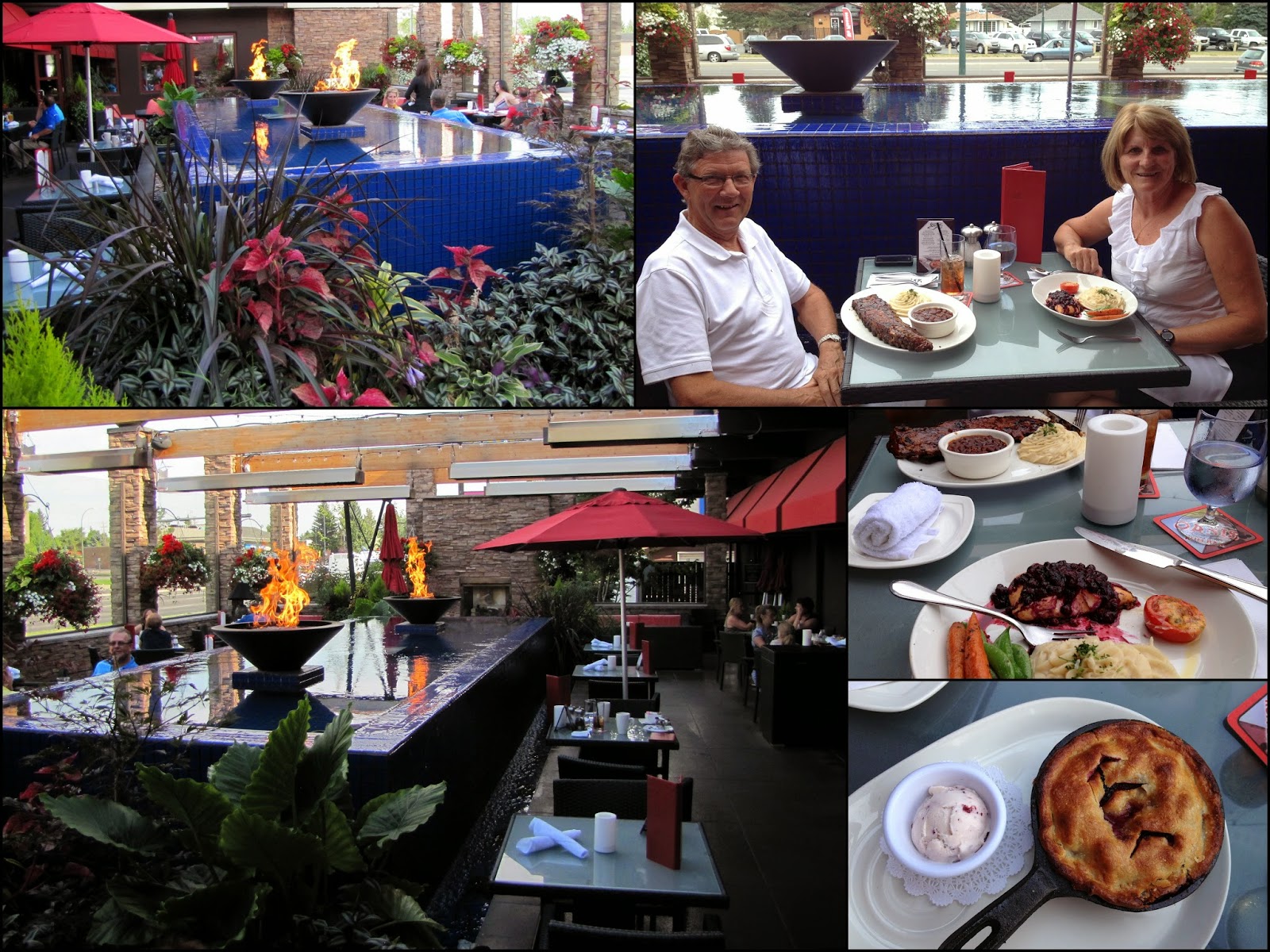 ...and celebrated our anniversary with a lovely dinner at a restaurant recommended to us by a local.

July came to an end...and we were still on our road trip.  We spent the last few days at Halcyon Hot Springs...a jewel in the Kootenay region of British Columbia.  I'll share that adventure another time!