The 'good old summertime' arrived in full force.  We had some sizzling temp's this month... 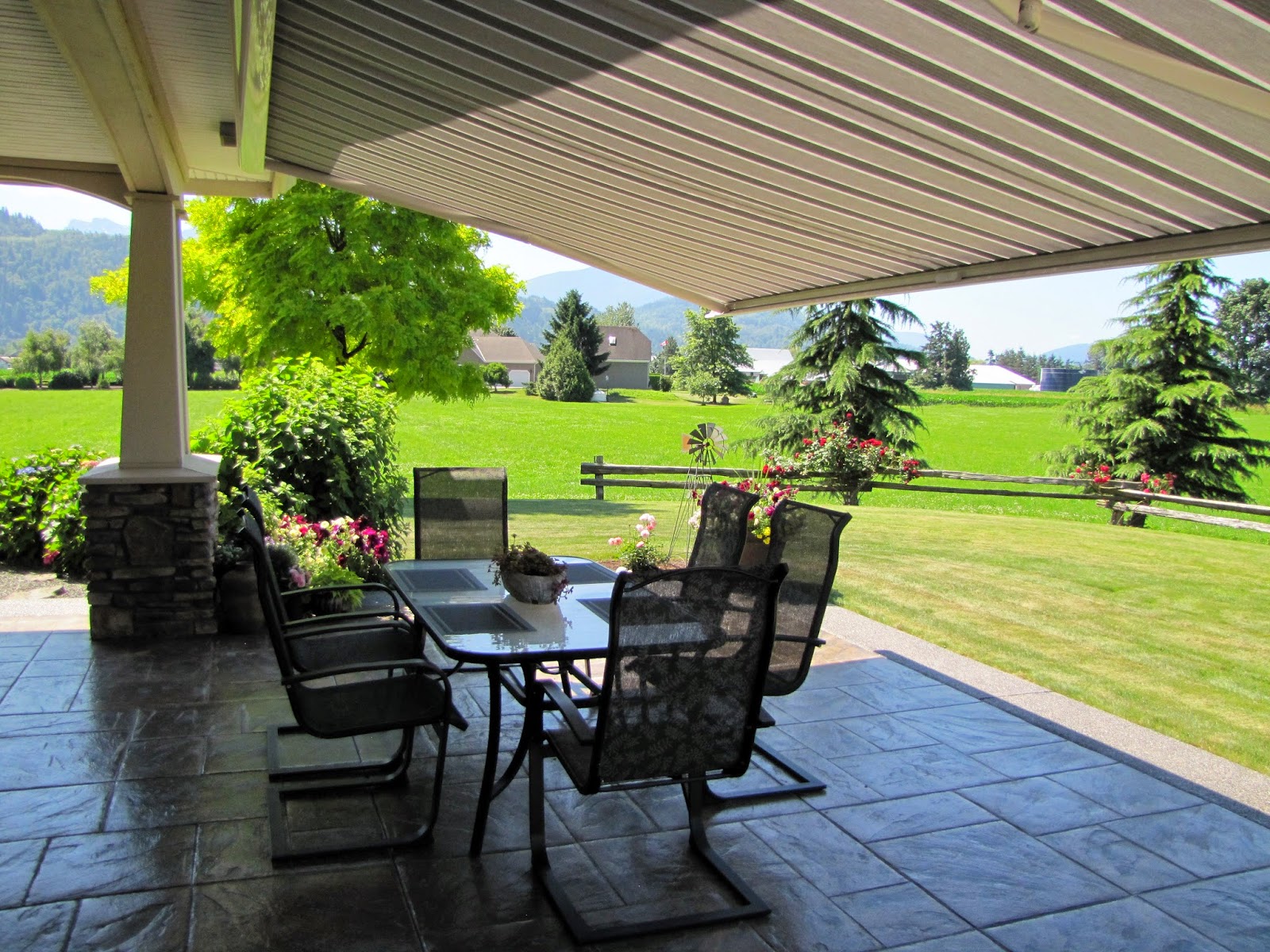 ..and were quite happy for the shade of the new awning over the back patio.Why did we not think of that long ago?

The month started off mighty warm.  We spent Canada Day at Hastings Park racetrack watching our friends' horse go for the gold.  It did just that! 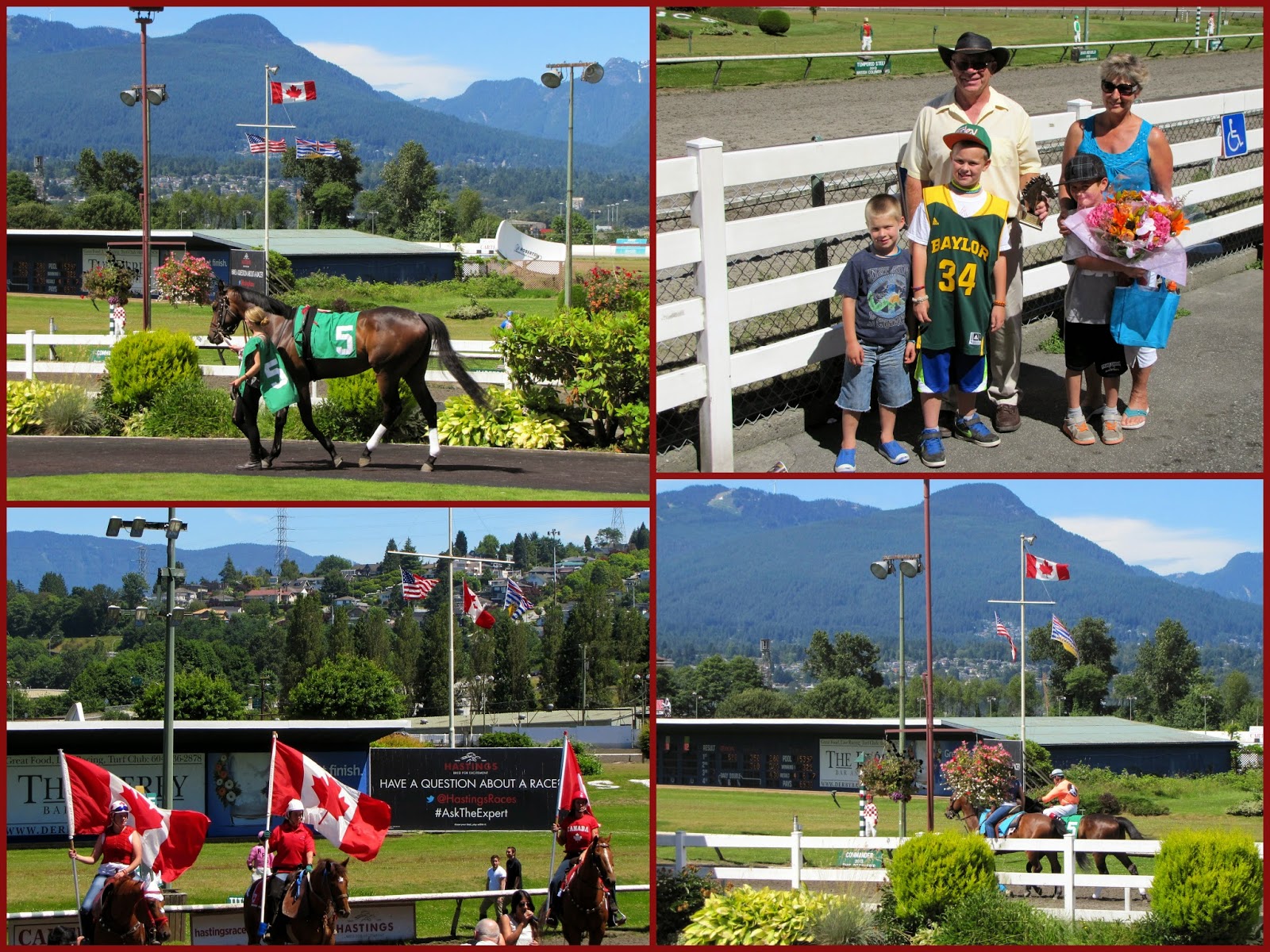 Koffee Grinder has raced three times this season...winning first in each of those races.   We were quite happy to help Butch and Renate celebrate their win! 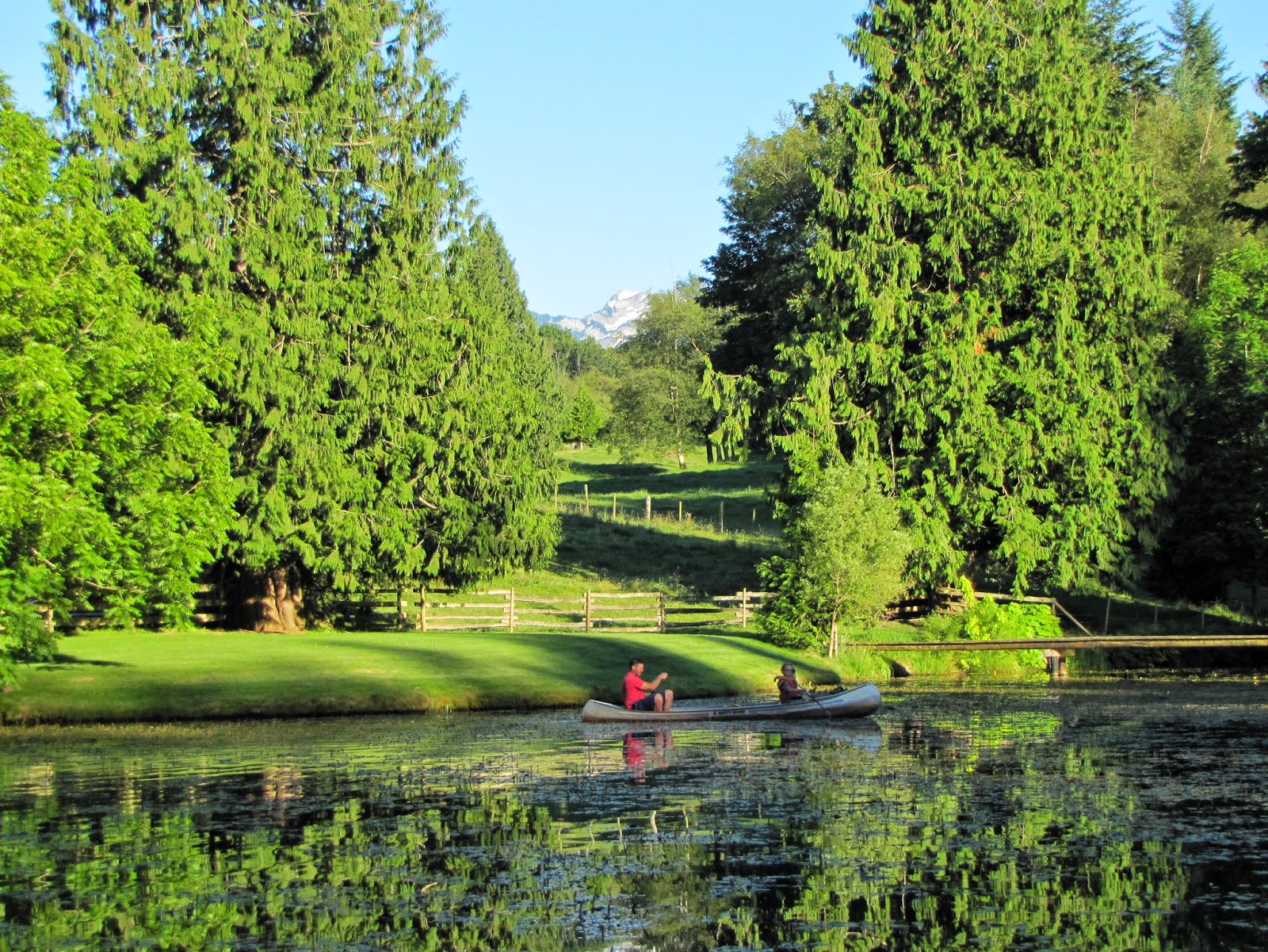 On July 9th...we had reasons of our own to celebrate...and that called for a picnic at BenAnna Lake. 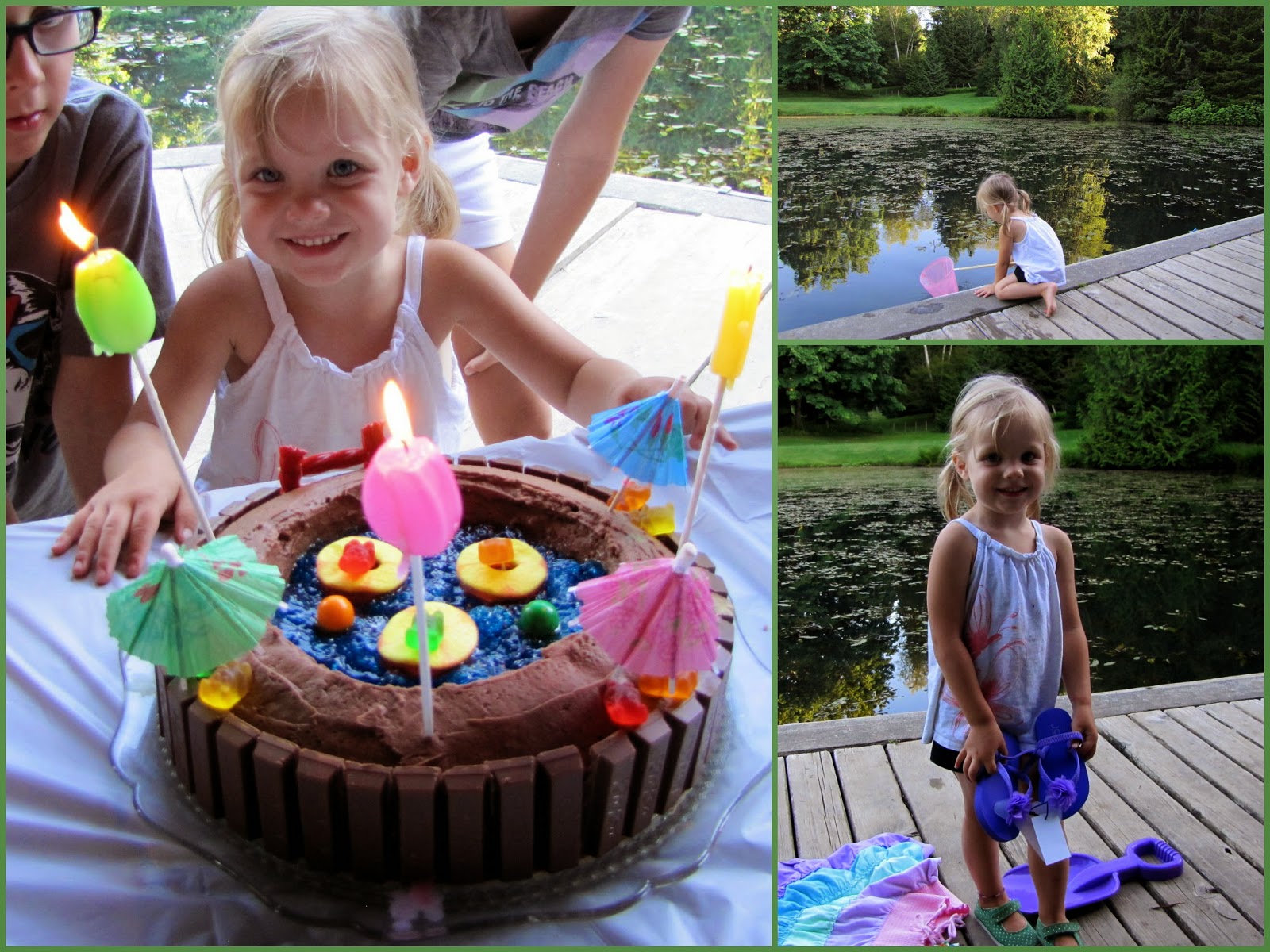 There were a few birthdays happening, but Lucy was the one who took the cake! Our baby grand is three.  How can that be? 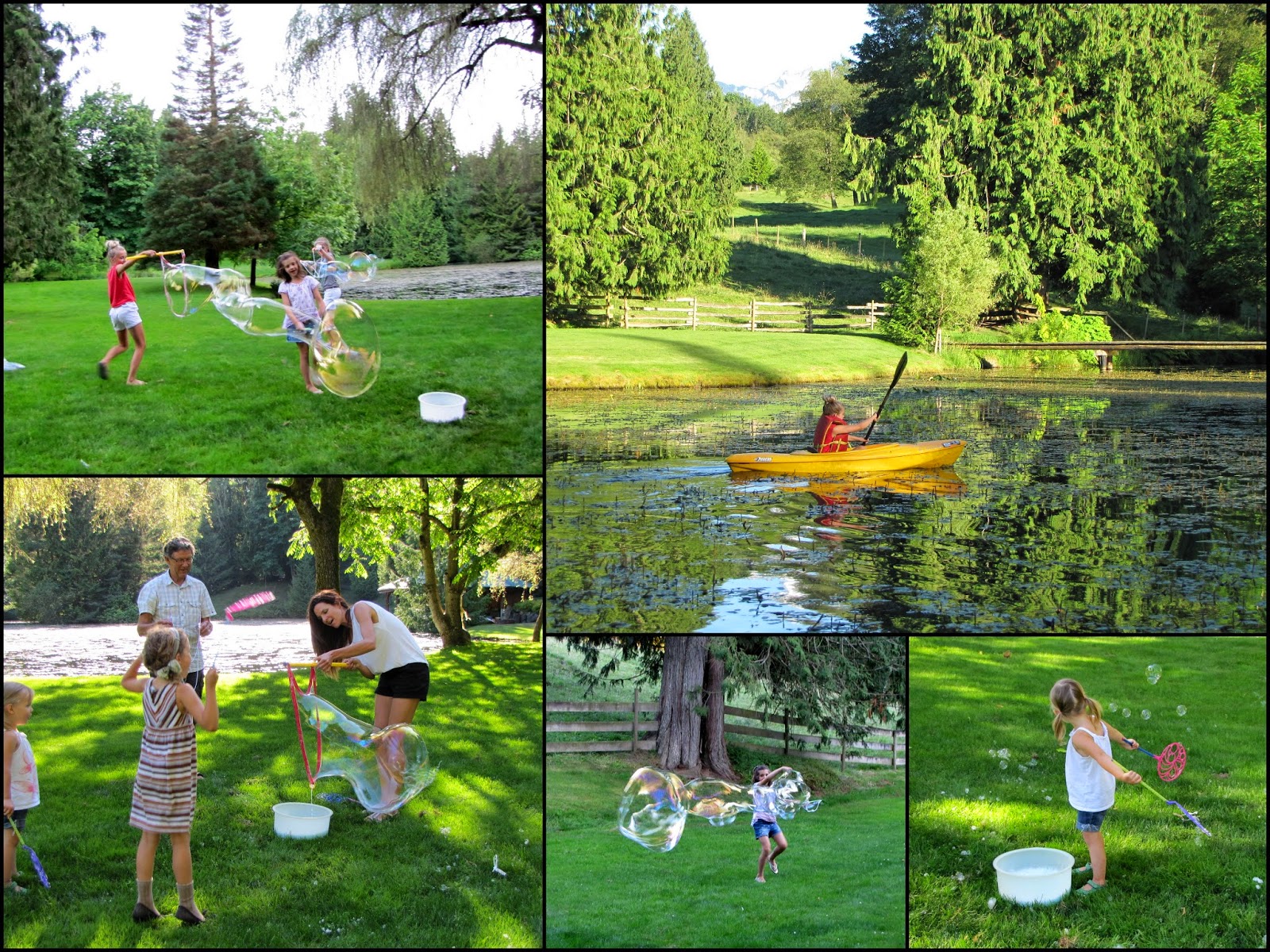 From good eats...to making giant bubbles or paddling the pond...it was a fun July picnic.

A few days later...we joined friends for a bike ride along the dikes of Richmond... 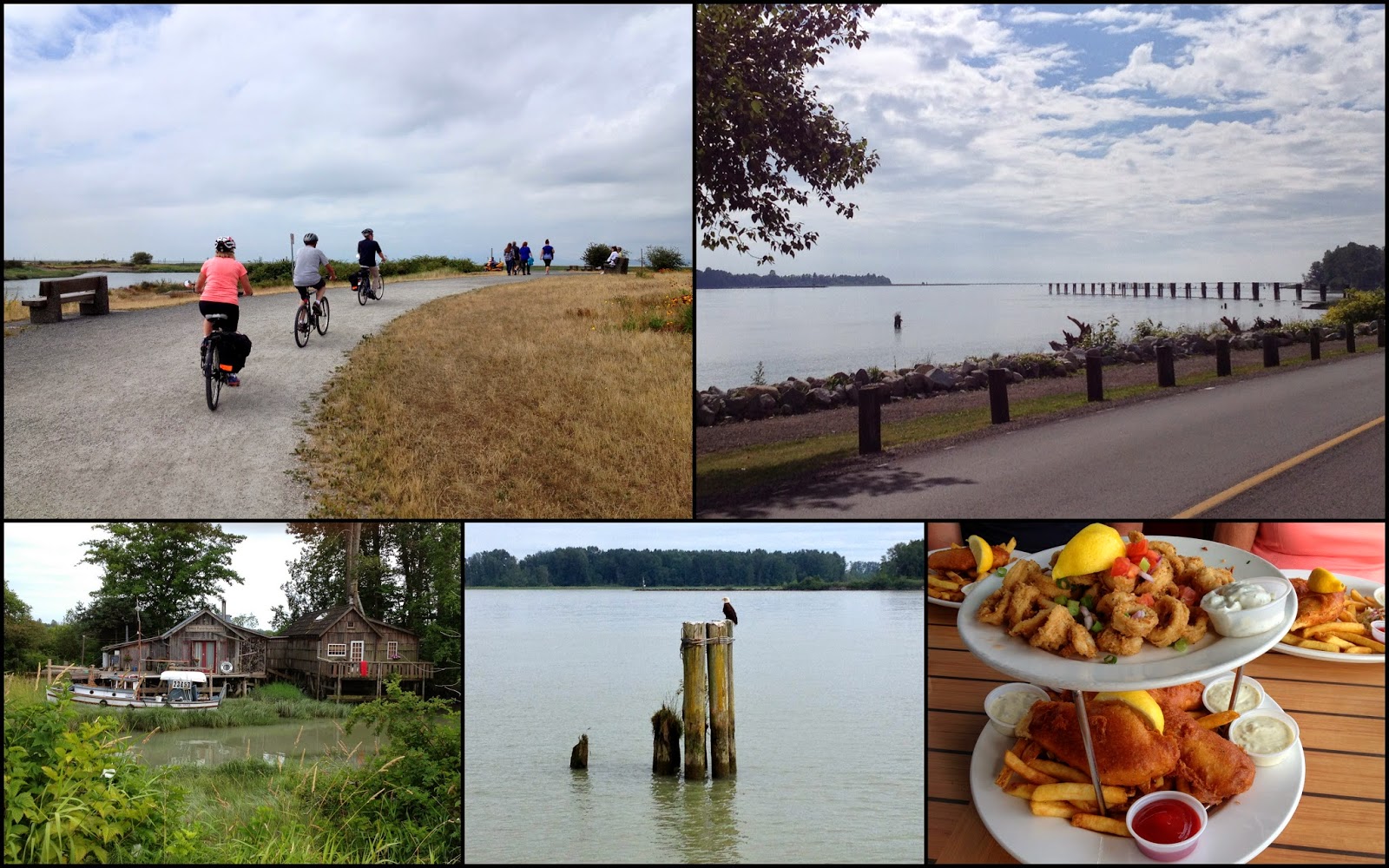 ...ending with fish 'n chips on the Steveston wharf.

Camping with the grands looks a little different each year.  For the past few years we have set up camp right close to home... 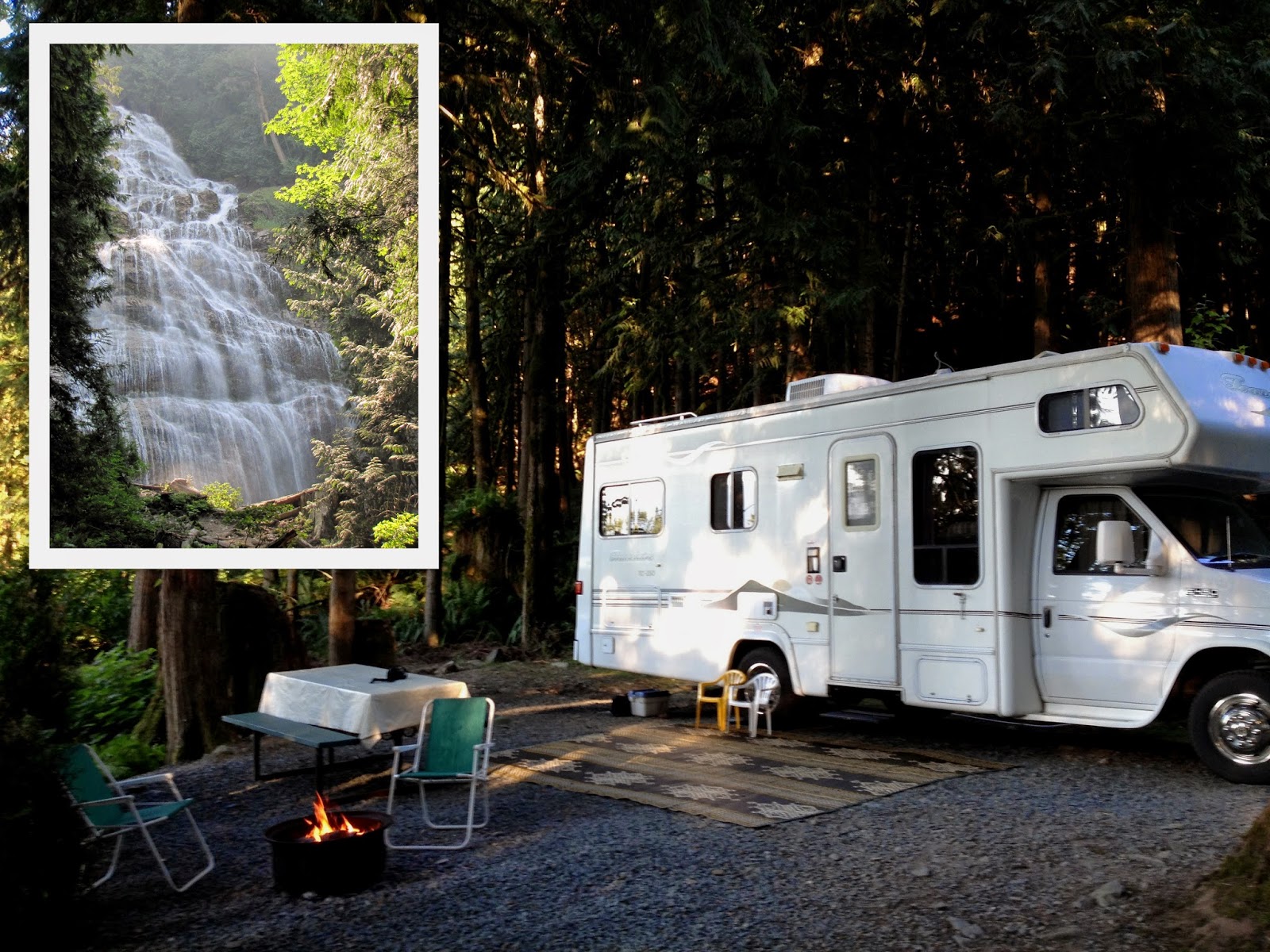 ...Camperland at Bridal Falls. It works out perfectly...since we can easily switch campers at the half-way point.  We always request a spot in the treed area...where the kiddos can play in the forest. 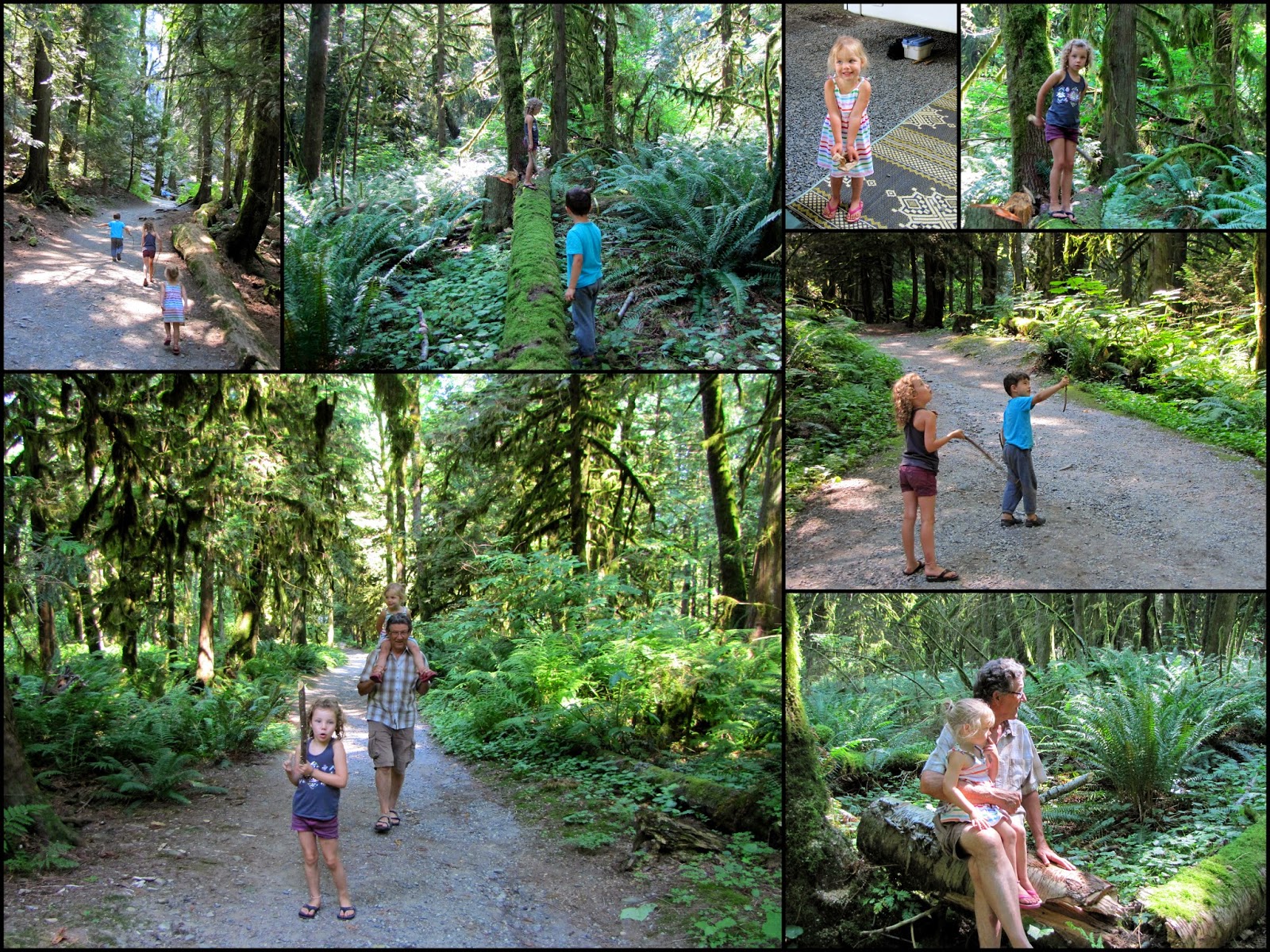 The youngest three came first.  Lucy remembered that she was not allowed to spend the night last year...and was quite thrilled that she was a full-fledged camper.  I forgot how hard it was to watch a three, four and five year old in the pool all at once.  We hiked and played...and we all slept like logs. Whew!

The next two arrived for lunch the following day...and we all had lunch together before Lucy, Maggie and Micah left for home. 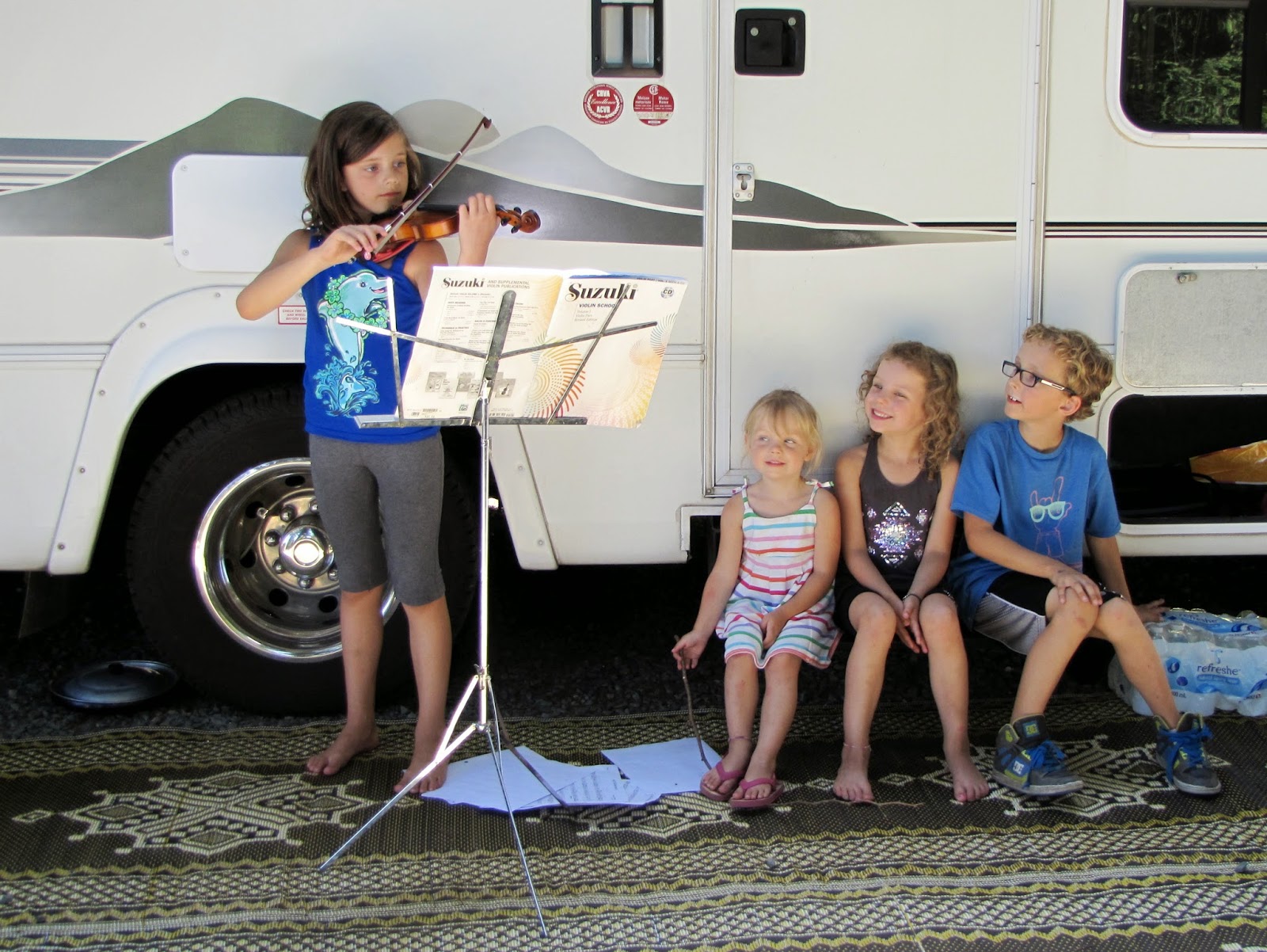 Ranen brought her violin and serenaded us while we ate.  Her cousins are quite the audience! 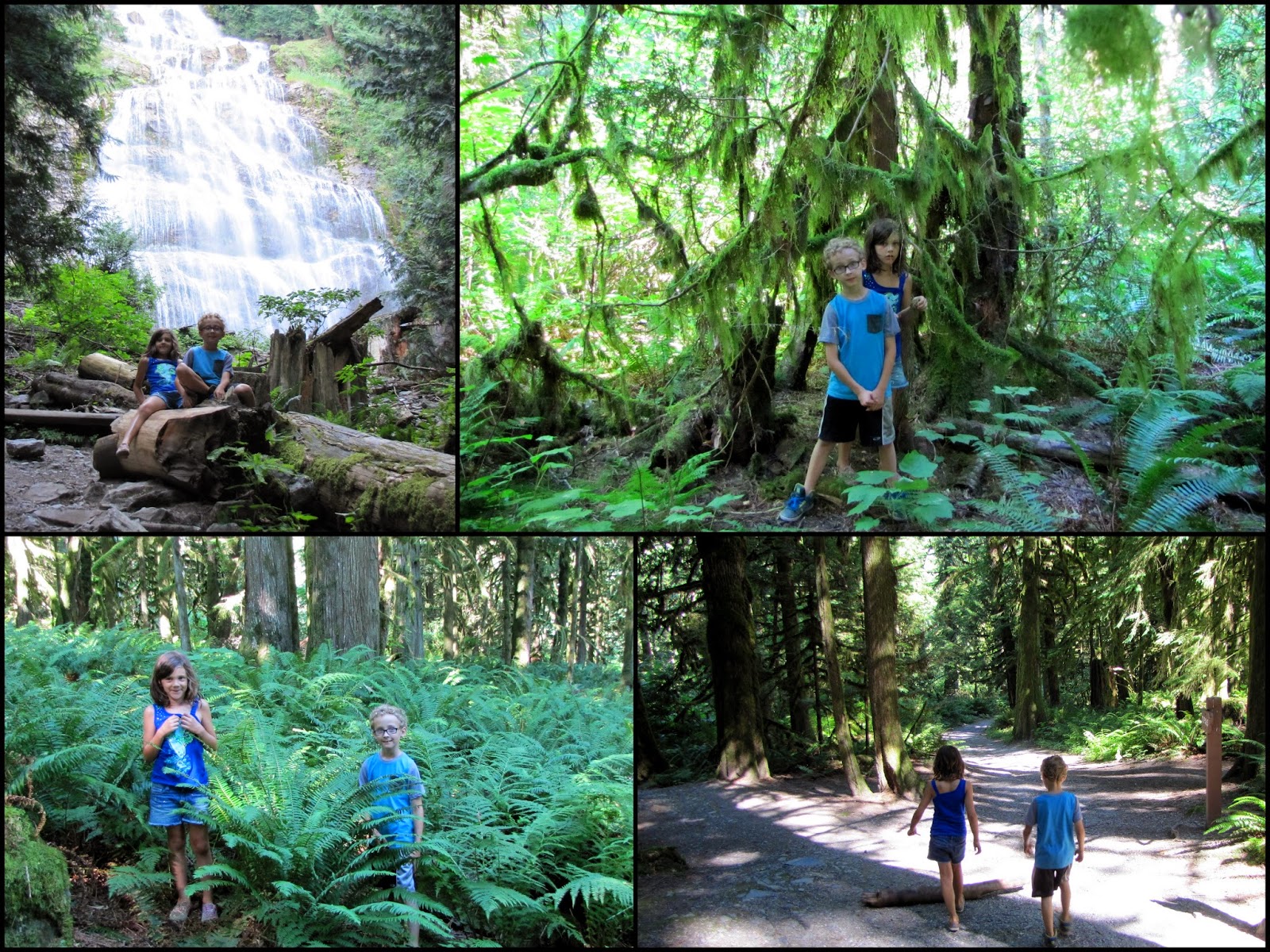 Eight year-olds are really easy to camp with!  Grammy can stay dry while they are at the pool...they play at the playground on their own...and make up games as they hike.  Though British Columbia was tinder dry most of July...one wouldn't know it when walking through the rain forest at Bridal Falls.  It is green and lush...and cool.

We had a really good time on our grand camping adventure.  But there were also a few 'less than happy' moments. 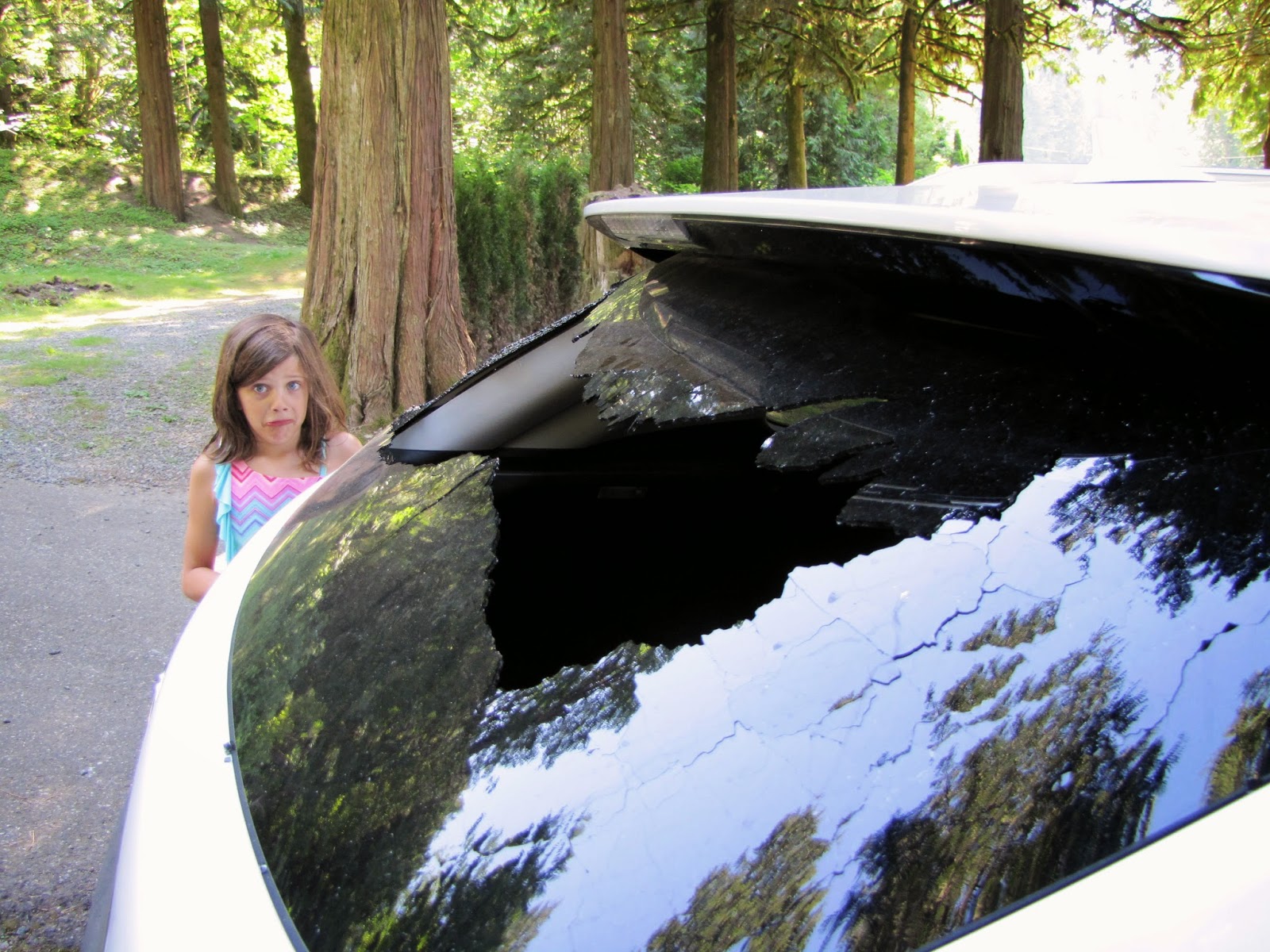 We heard a crash...and the rear window of our SUV spontaneously shattered.  It was parked in the shade, all locked up tight and no one had been in it for more than a day. Go figure!  Apparently that happens on occasion.  I checked to see if it might possibly be covered on warranty...but that was up in April of 2014. Of course.  We now have a spanking new rear window...and hopefully it stays intact for the duration.

That same night, there was another crash...one not so easily repaired.  Kris was in a motorcycle accident and seriously injured.  We decided not to tell Ranen that her dad was hurt until we were ready to leave the campsite the following day.  He is now on the long road to recovery...and we are so thankful for the medical care he received and the prayers of many.

The last part of July, saw us take a road trip.  Emme and Spencer decided they would like to ride along with us in the RV to Manitoba...where we were meeting up for a family reunion with aunts, uncles and cousins from near and far. 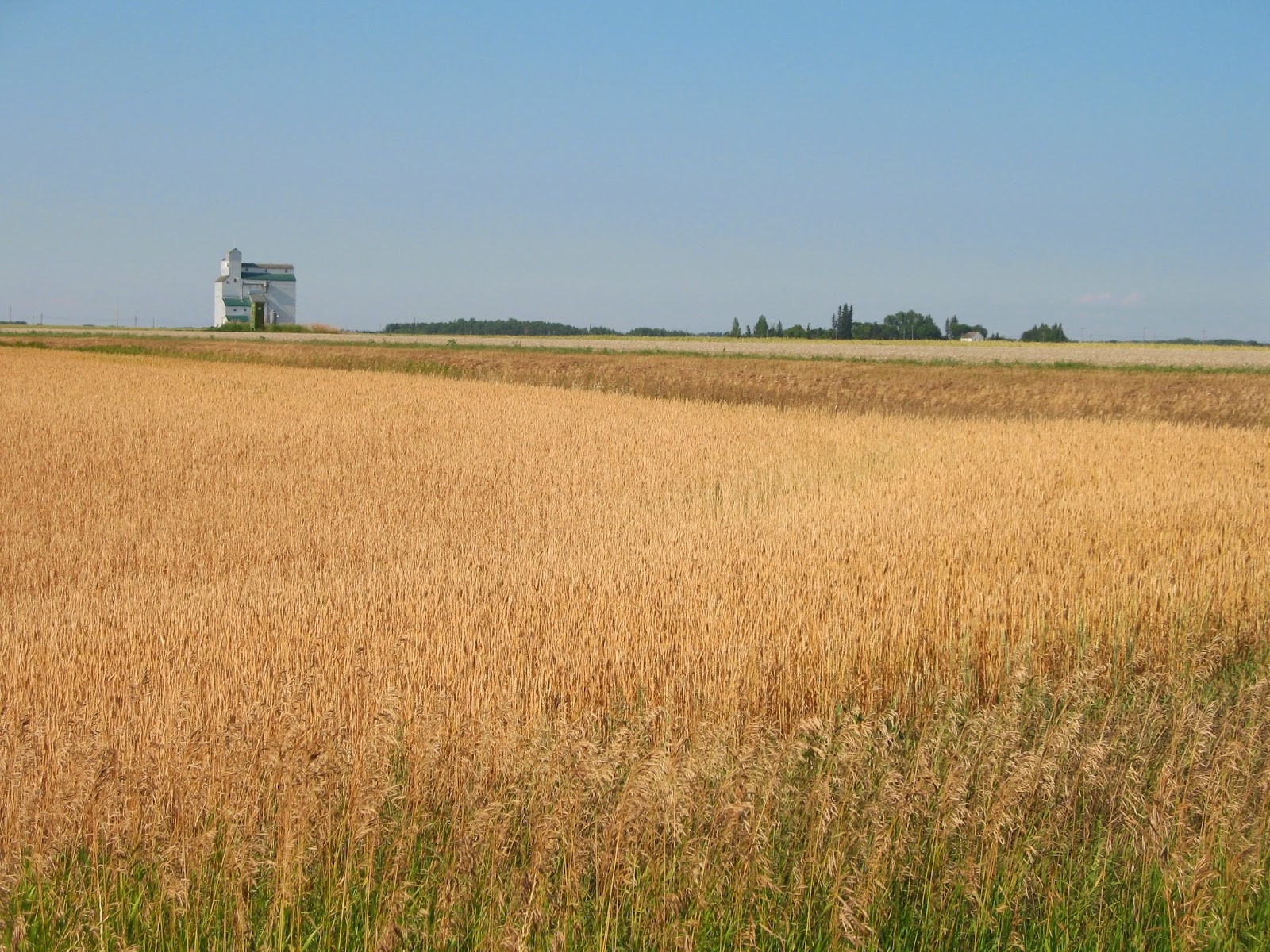 We all camped out at my sister's farm near Carberry last weekend...in the shadow of the Harte elevator.  Emme and Spencer flew home with their mom and dad on WestJet...and we are slowly winding our way homeward...visiting friends along the road.  I'll add a postcript about our trip to the prairies once I am back home.

And that was July in a nutshell!  Besides all the fun stuff...there was hay to make and work to be done on the farm.  We also had family come to stay one weekend, a wedding celebration to attend, a 40th anniversary party for our friends and an annual dinner out with three other couples who all celebrate July anniversaries.  Speaking of which...tomorrow is our 43rd wedding anniversary.  It's been a good journey... 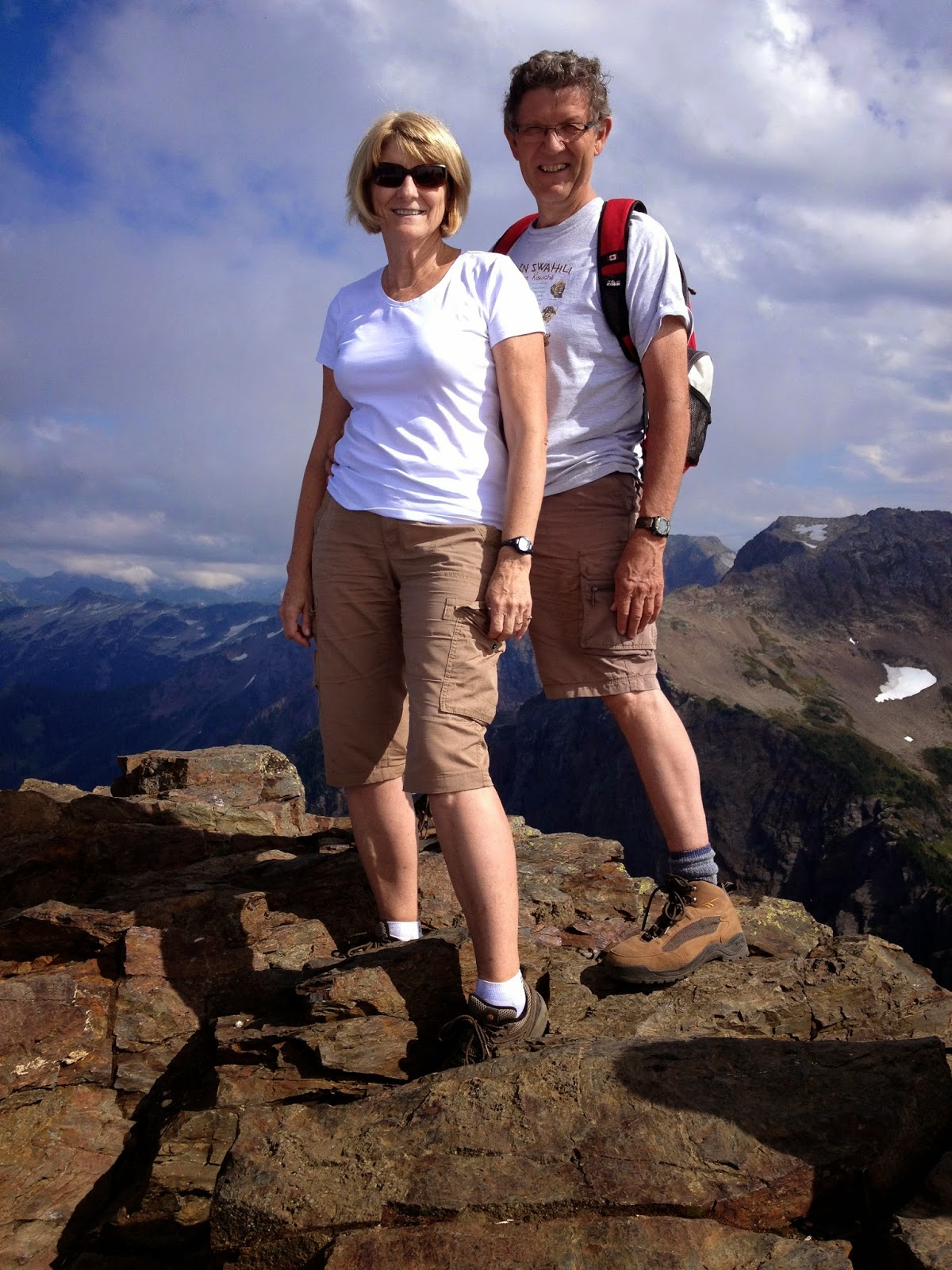 ...and we look forward to climbing more mountains together in the years ahead.