The Great Barrier Reef and the Outback


Cairns...located in northern Queensland, is the gateway to Australia's Great Barrier Reef. 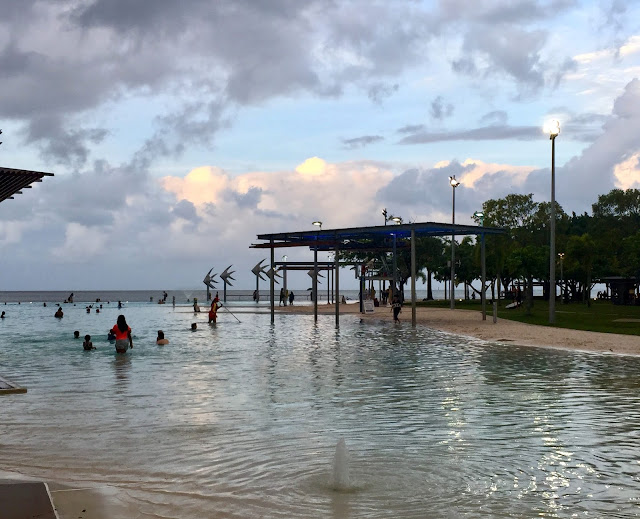 I discovered that I had always pronounced Cairns wrong.  It is Cans.  The Aussies somehow lose the 'r'.  Our visit to the Great Barrier Reef began at a marina right near this lagoon. 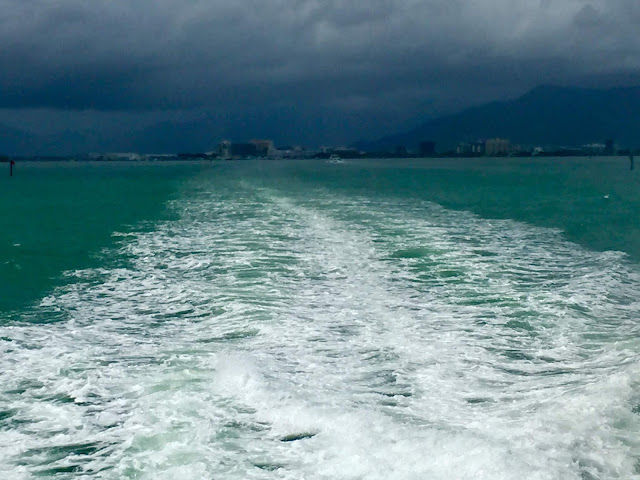 We boarded a catamaran for our trip out the reef... 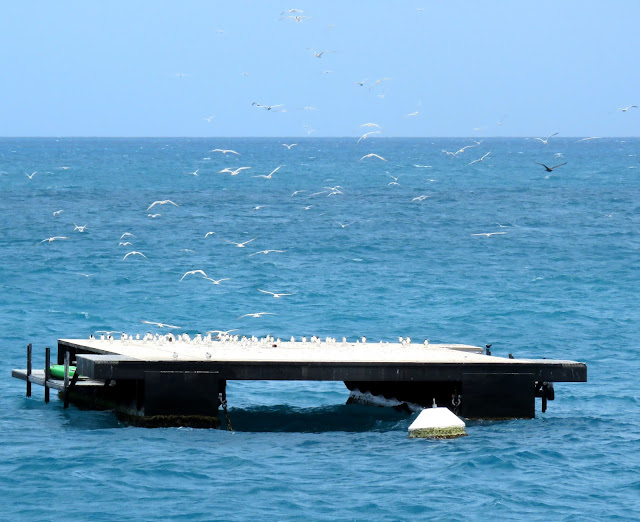 ...where we spent the good part of the day docked at a platform. 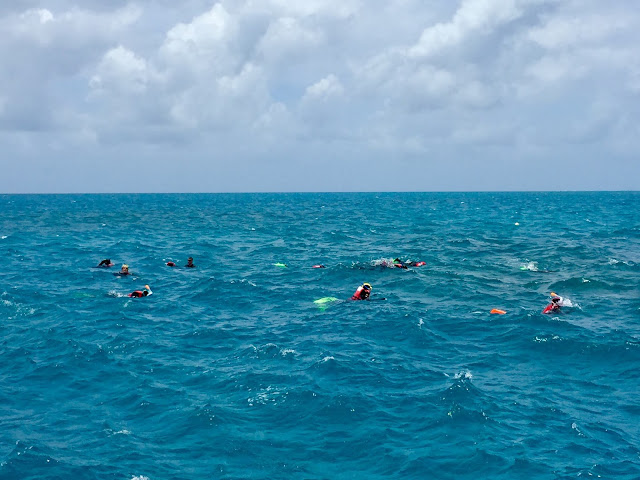 It was a bit of a stormy day...so snorkeling was not the best! What with the waves and knowing that I had to wear a latex suit to go in the water...I opted out.  Instead I viewed the reef  from a glass bottom boat. Can I say I was a little disappointed? I'm sure the underwater experience would have been so much better.  We had a wonderful BBQ lunch on the catamaran. 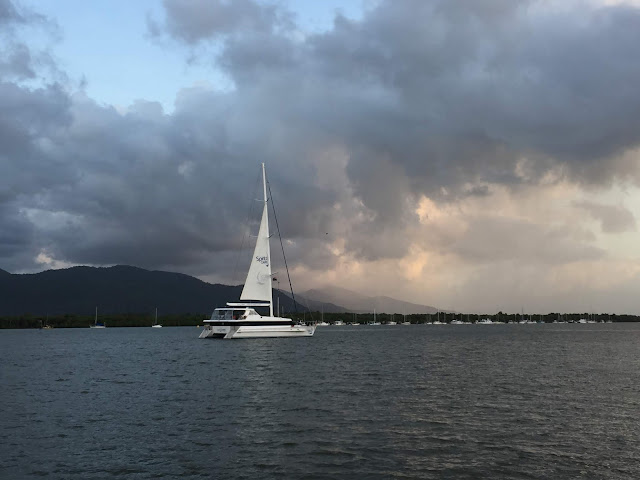 The sky was rather dark when we returned to Cairns at the end of the day...but the rains held off until after our visit.  They had record rainfalls and historic flooding in the area shortly after we were there. 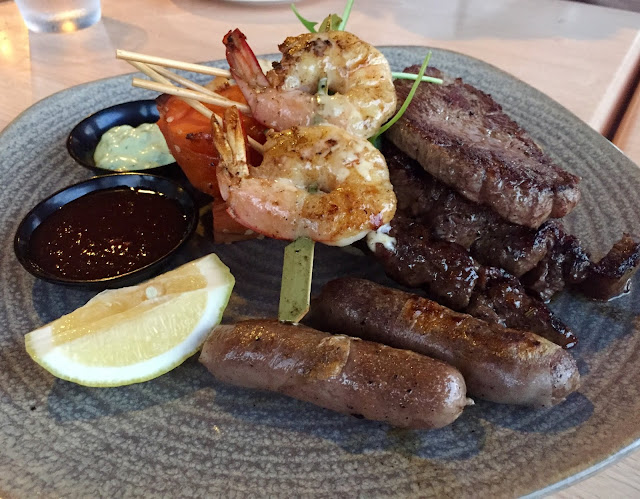 Once our feet were back on dry land, we checked out a restaurant on the waterfront that had been recommended to us. We ordered the Australian sampler plate...barramundi, beef, prawns, kangaroo, crocodile, emu sausages. I can say I had a little nibble of each.  If you know me, you know that I prefer salad to meat at the best of times...and am not too adventurous when it comes to trying foods 'outside the box'! But, 'when in Australia...'

As for the Aussie hamburger, you can expect to find pickled beets and a fried egg in your burger...along with the beef, lettuce, tomato, and onion. 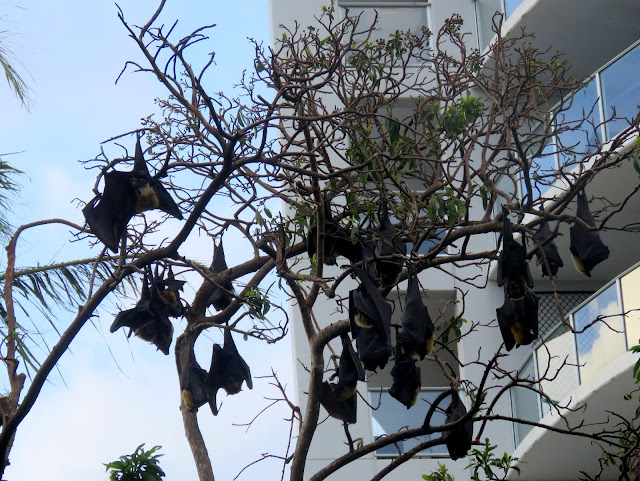 What I will always remember are the bats hanging from the boughs of the trees in Cairns. 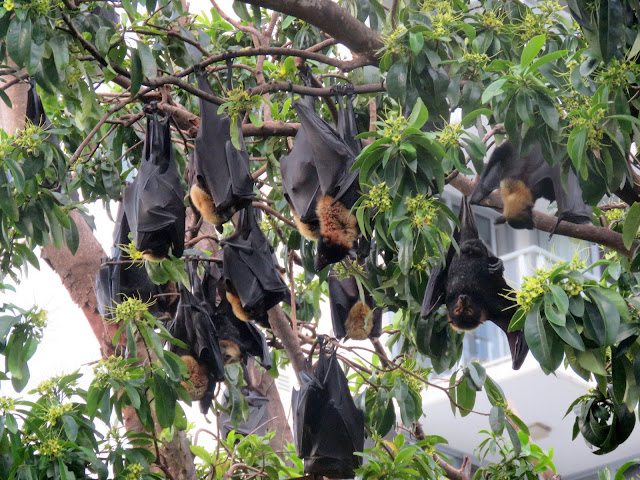 Since they are a nocturnal animal...we watched them coming to life in the evening.  (Click link for video clip) 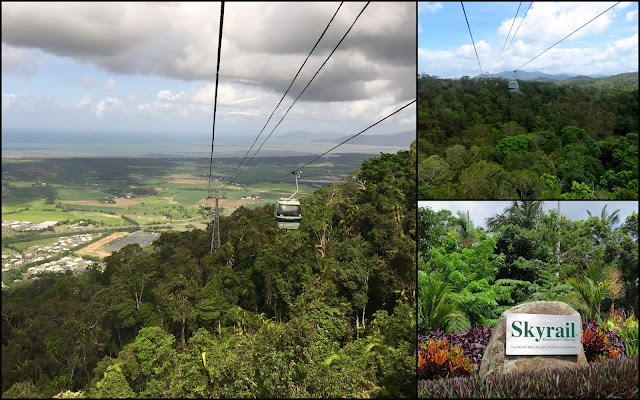 We rode the Kuranda skyrail above the rainforest...located just 15 minutes from Cairns. 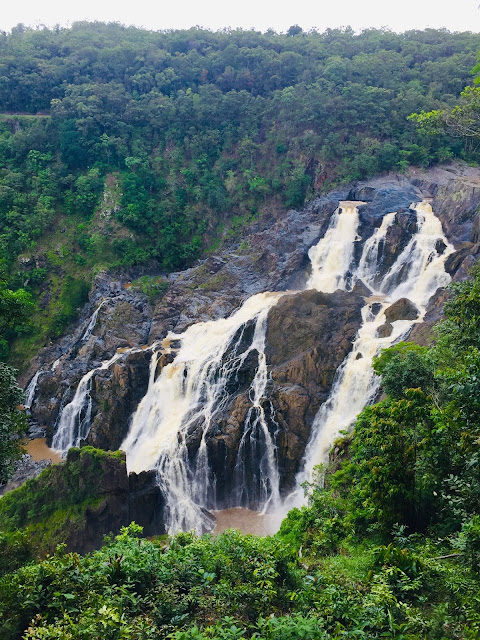 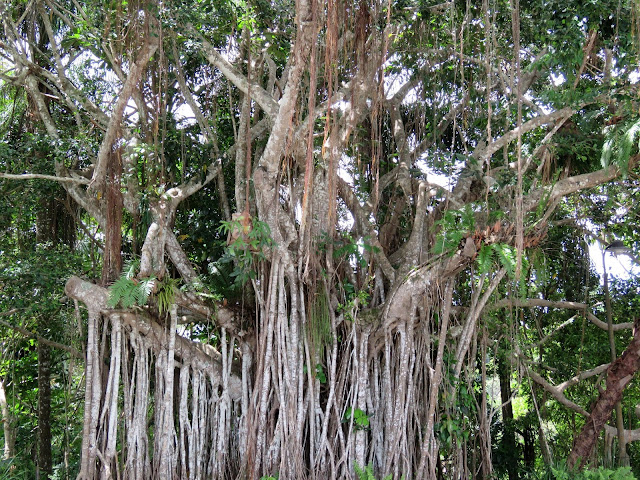 We got off the cablecar at several stations and walked on boardwalks through the amazing rainforest. 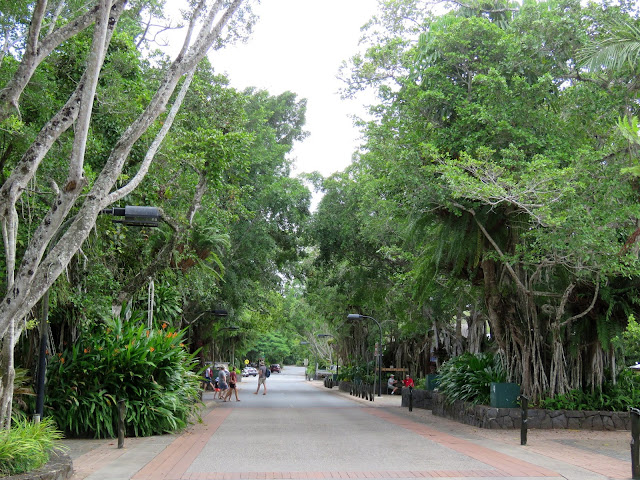 As you can tell, things were green in this part of Australia.  And after we passed through, there was record-breaking rainfall and flooding in the region. 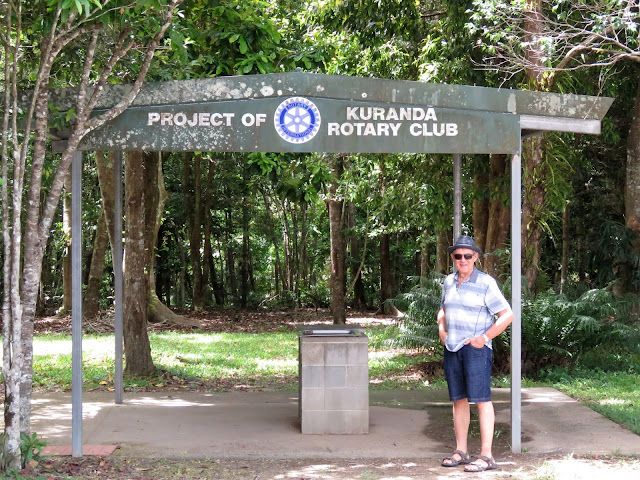 It seems wherever we go, we see that local Rotarians are hard at work in their communities.   A lookout in the rainforest had a recent revamp thanks to the Kuranda Rotary Club.  My Chilliwack Rotarian noticed, of course. 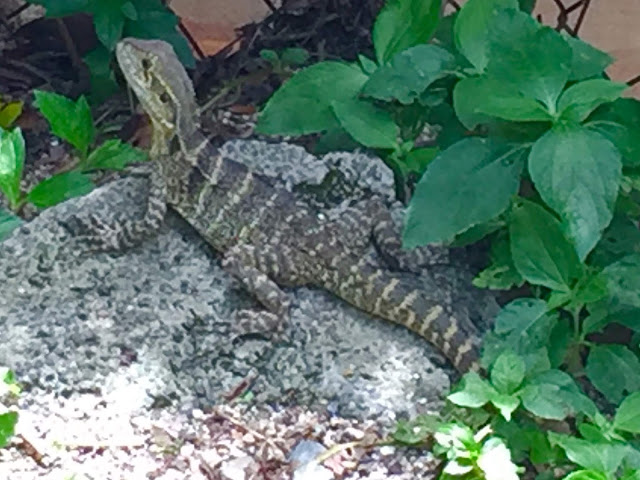 Thankfully we never met up with any spiders or snakes out in the wild...but saw plenty of these lizards. 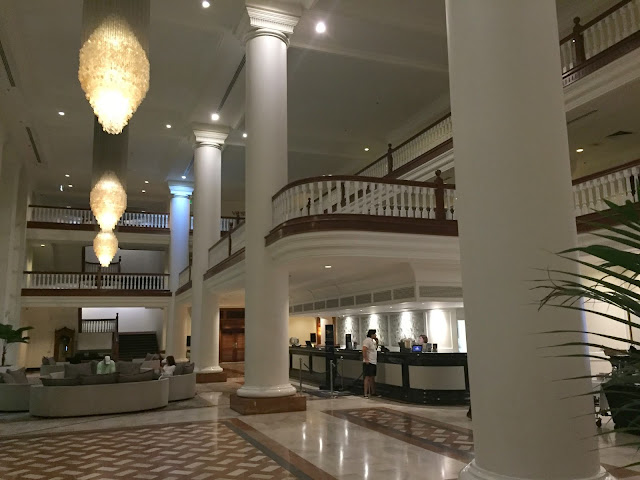 Our 'outback land tour' was organized by Princess cruises and it was great.  The hotels were all great...like the Cairns Pullman International pictured above, and our tour guide couldn't have been better. 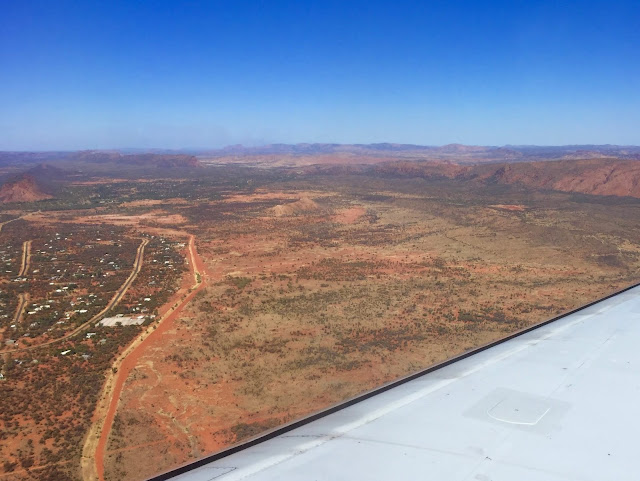 From Cairns we flew to Alice Springs, a remote town in central Australia and the gateway to the desert region. 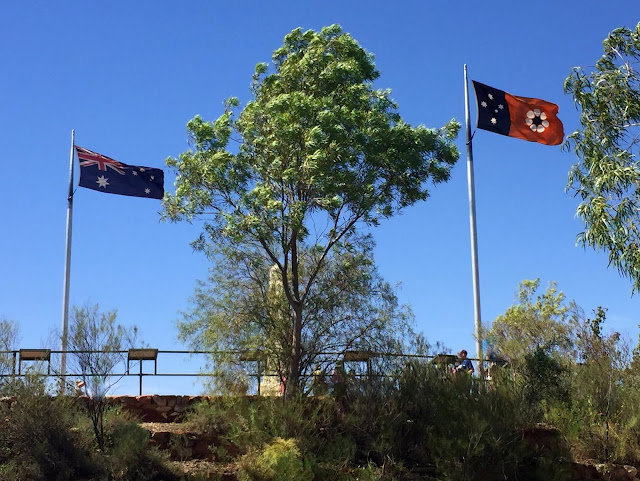 We met at the top of Anzac Hill for a brief lesson in history...and a great view over the town.  Since it was 43°C while we were there, we were looking for air-conditioned businesses before long.  Because Alice Springs lies along the rail line between Adelaide and Darwin (some 1500 kms from each) it is a major rail hub.  It is also the nearest town to Ayers Rock, one of Australia's most famous landmarks and our final destination. 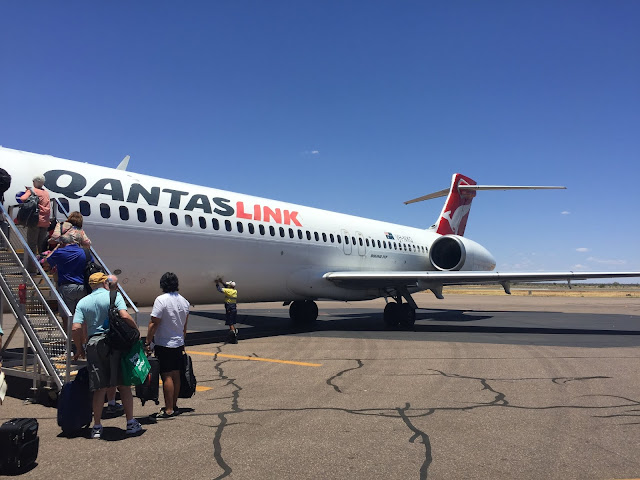 From Alice Springs, we took a short Qantas flight to Ayers Rock.  All told, we had nine flights during our 'down under' trip.  Air Canada took us there and back. Qantas, JetStar and Virgin got us from place to place within the very big country of Australia. 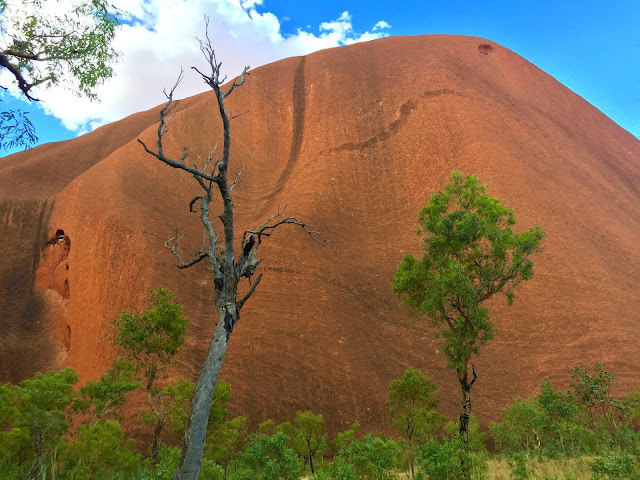 Ayers Rock is a huge chunk of sandstone jutting up 350 meters from the barren desert...the world's largest monolith.It is a World Heritage Site and a sacred place for the aboriginals.  Though we know it as Ayers Rock, the name was officially changed back to its aboriginal name of Uluru some twenty years ago. I'm not so good with name changes, so I mostly use the old name. 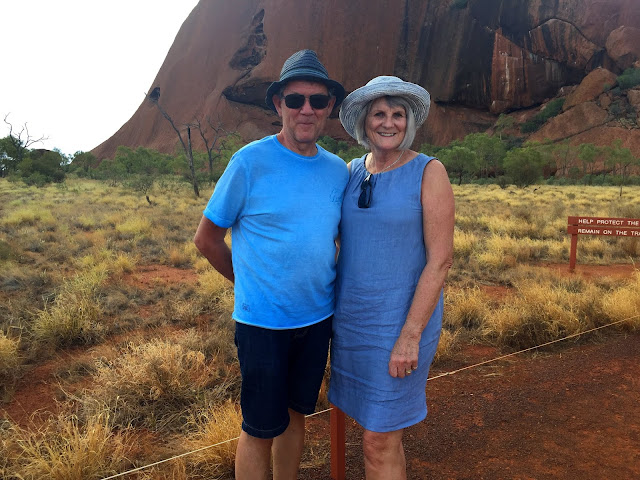 Though it was stifling hot, we did some hiking around the base of the rock in the late afternoon and then stayed to watch the sunset. 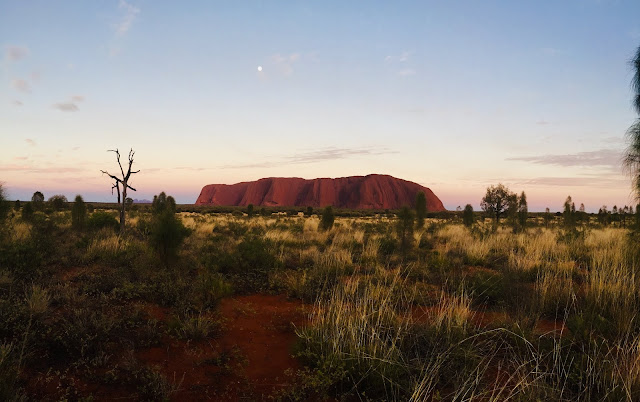 Early the next morning, we joined a few other early risers to watch the sunrise at Uluru. By that point, our days and nights were so confused anyhow that missing a few hours of shut-eye really never mattered! 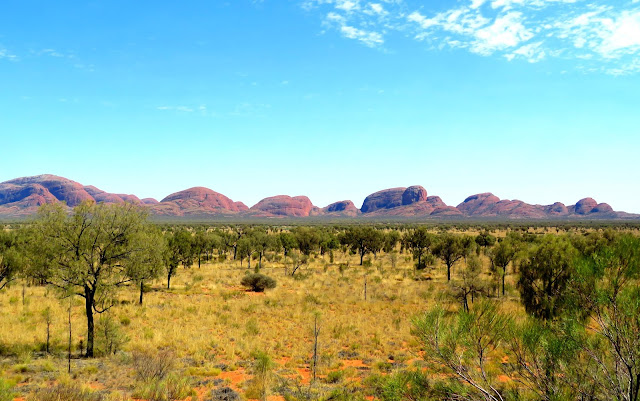 Uluru-Kata Tjuta National Park is also home to 'The Olgas'...a range of 32 domes rising from the desert floor. 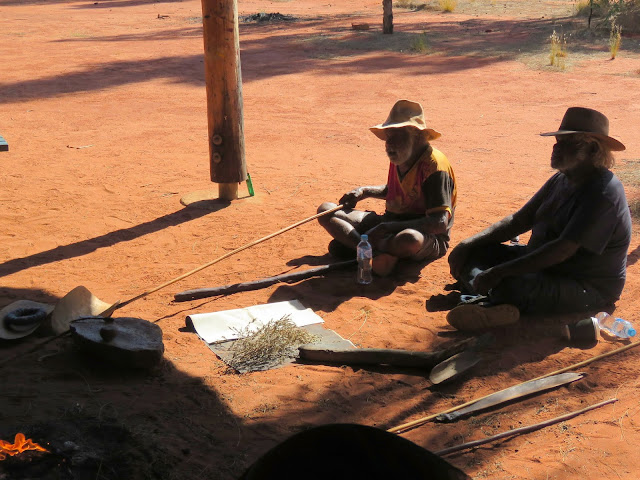 We visited the cultural centre and took in an aboriginal campfire, where we learned a lot about surviving and thriving in the outback. 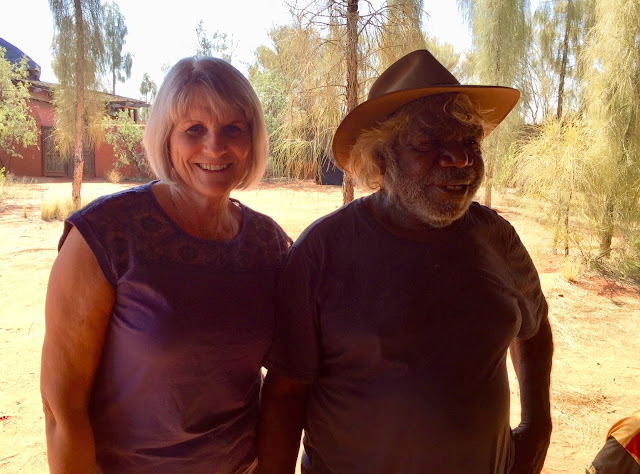 Rolley was one of the presenters. He would do well on Survivor! He is also an artist, a carver, a dancer and has acted in several movies filmed in Australia. 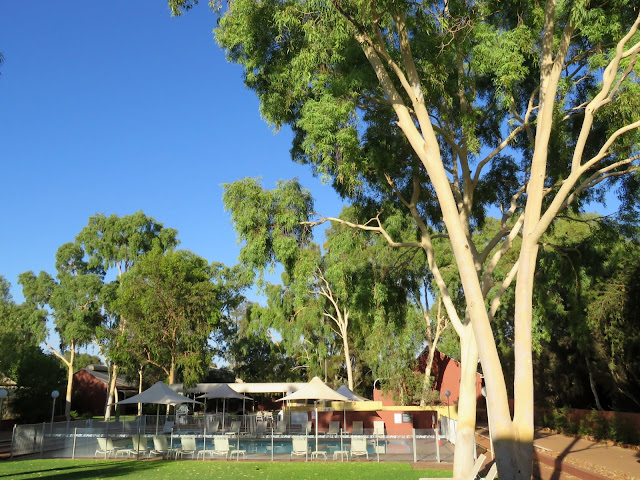 The Desert Gardens Hotel at Ayers Rock Resort was the perfect retreat from the heat. 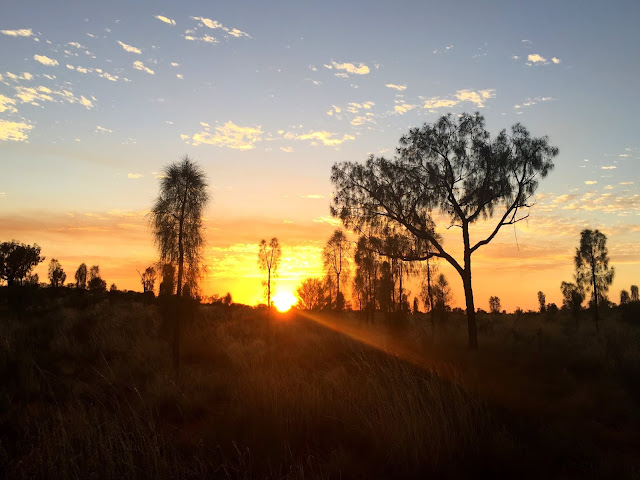 Sunrise. Sunset.  And in between...many awe-inspiring memories of our time in the Australian Outback.

And with that I will end this post. Next up...a cruise around New Zealand.