July ~ as it happened

Let me take you back to the beginning of the month... 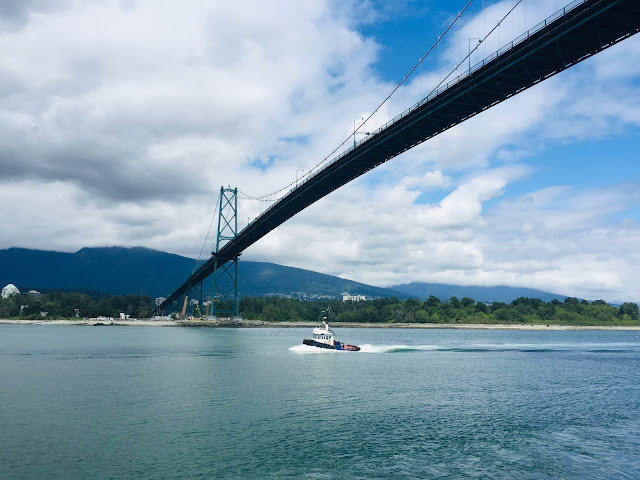 ...and a few days spent in Vancouver. 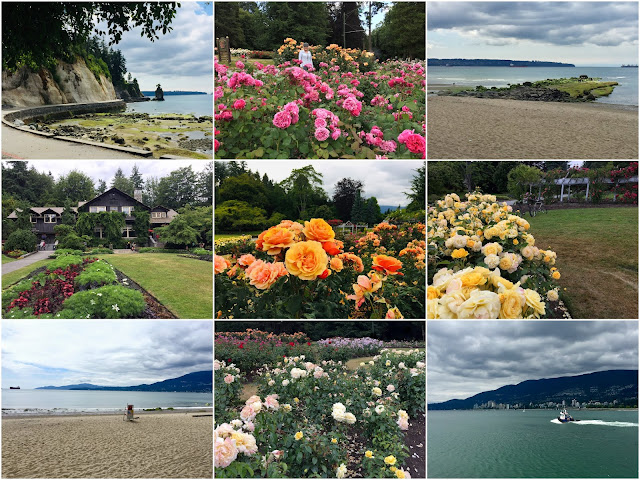 We cycled the Stanley Park sea wall, and checked out their beautiful rose gardens. 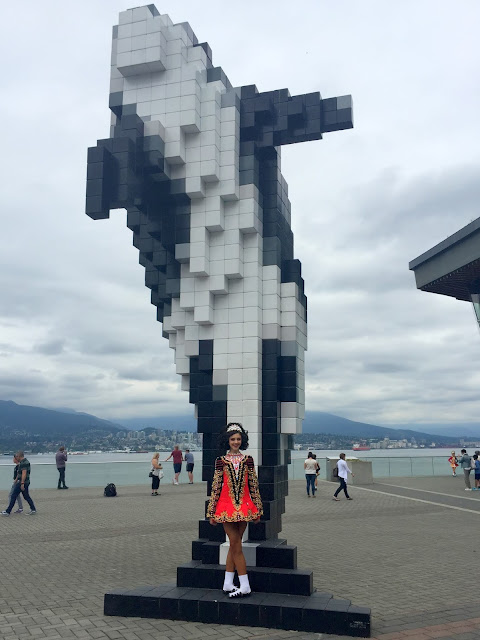 We had a good reason to be in the city.  Ranen was competing in the North American Irish Dance Competition at the Vancouver Convention Centre... 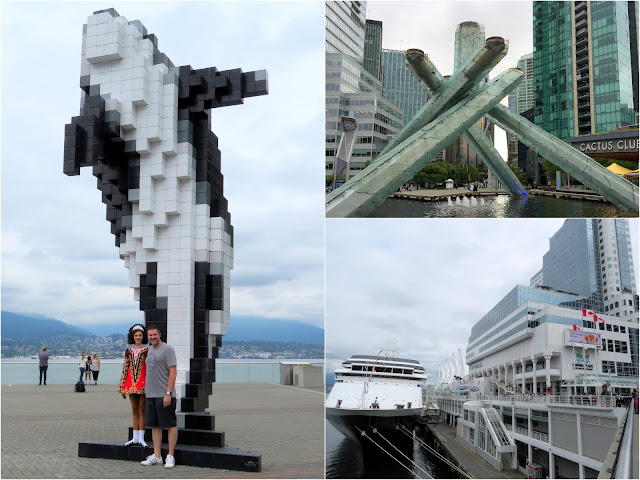 ...and we were there to cheer her on! It's fun to spend time on the waterfront occasionally, and dine at a table with a water-view. 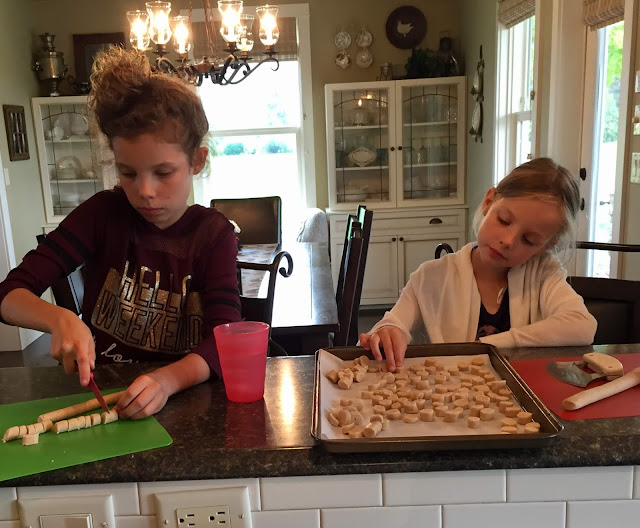 Maggie and Lucy came over one sunny summer day and their choice of a fun activity was to bake peppernuts.  Christmas in July! 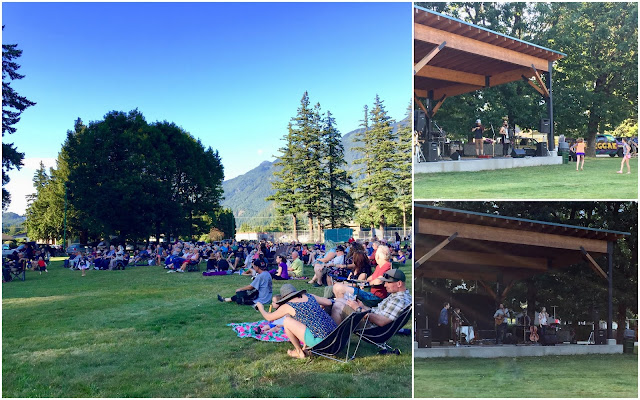 We enjoyed concerts most every Friday night.  Twice we took in the 'concert in the park' in Hope. What a nice way to spend a summer evening! 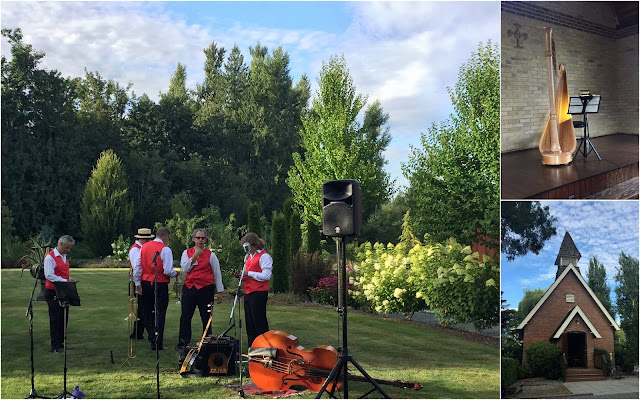 Last Friday we joined friends at the 'The Three Slices of Summer' concert in Abbotsford...a progressive concert at three different venues with a 30-minute concert at each location and appetizers at each as well. It was a delightful evening...a jazz band at Tanglebank Gardens, a renowned harpist at a beautiful heritage church in Clayburn Village, and a violin concert by Calvin and Heather Dyck at the Mennonite Heritage Museum. 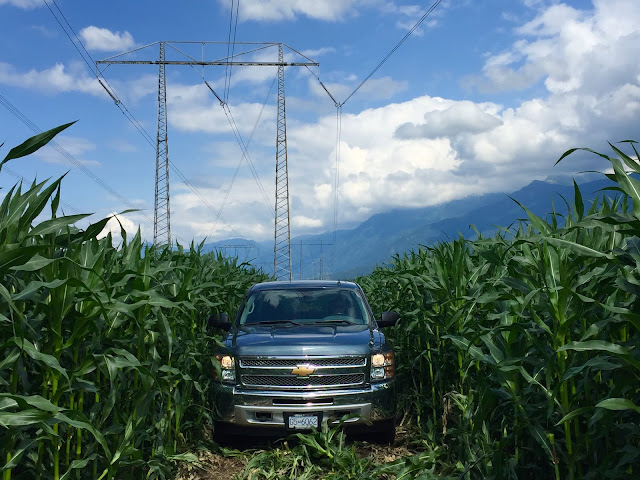 For the first time in several years we did not have to deal with the smoke from forest fires over here this July.  It was cooler and wetter than usual, but the farmers were happy! The corn topped eight feet by mid-month and it looks like we will have a bumper crop this year.


It was  such a privilege to have friends from Pennsylvania come for a visit. Judy and I first met through our blogs some ten years ago.  Then in 2013, while we were on a road trip in the eastern USA, we had a surprise invitation to come for dinner while we were in their area. We had a great time together, and they promised that they would could visit us sometime soon.  It took a few years... 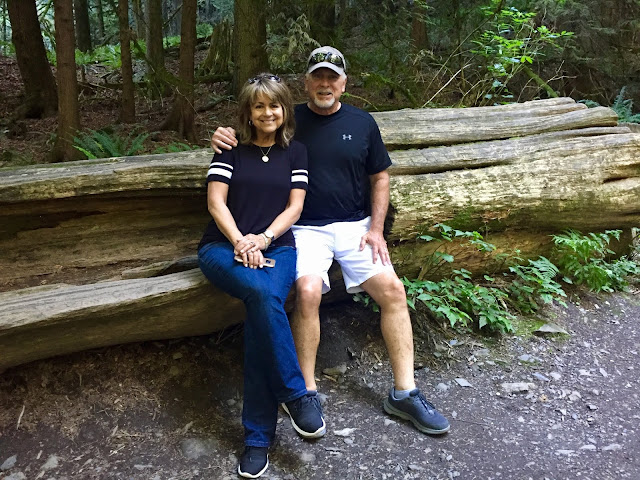 ...but we were delighted that things worked out for them to come at last. 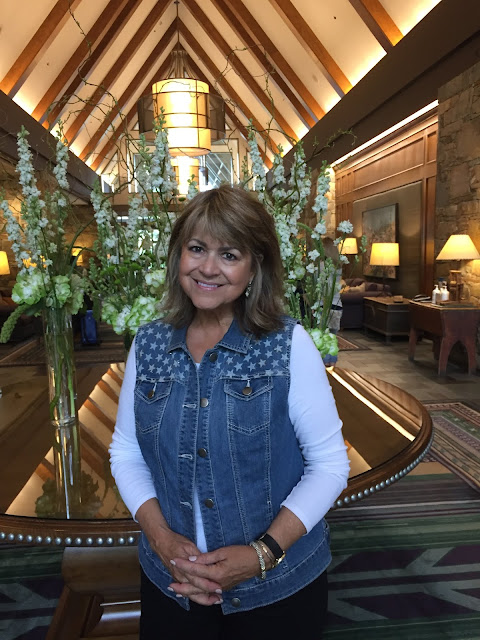 Judy and I share a lot of things, besides the same name. We could identify with the quote by C.S. Lewis that says:

Friendship is born at that moment when one person says to another: ‘What! You too? I thought I was the only one.' 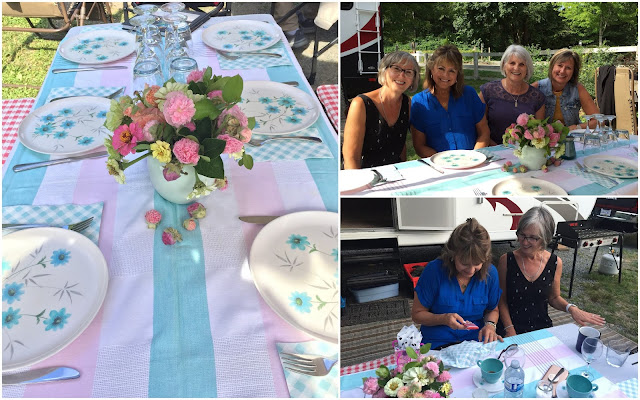 One evening we were invited out to a picnic at Brae Island campsite, where our friends were camping. Judy also knew Lovella and Anneliese through their blogs, and so we had a blogger's reunion. And a fabulous feast in Fort Langley!  Why did it seem like we had all been forever friends? 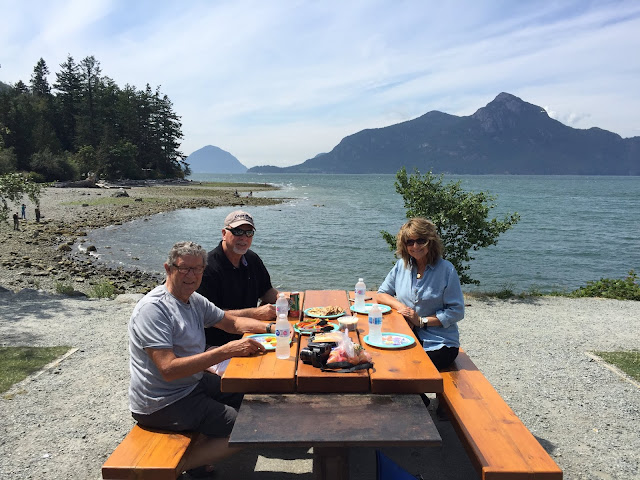 We toured them around our area, and then went to Whistler together  for two days.  We had a picnic lunch at Porteau Cove... 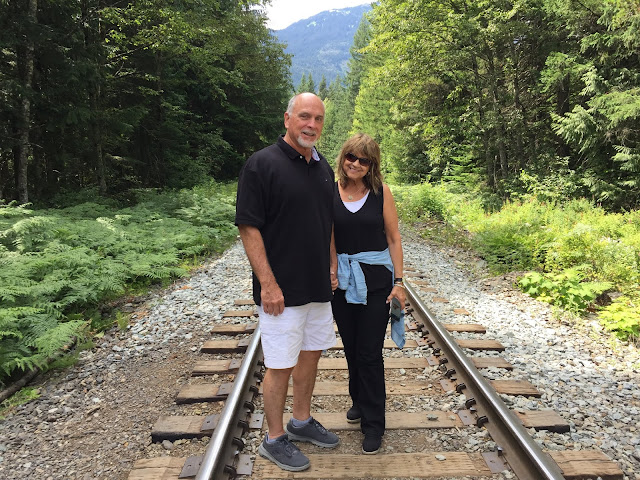 ...did a short hike to  the spectacular Brandywine Falls... 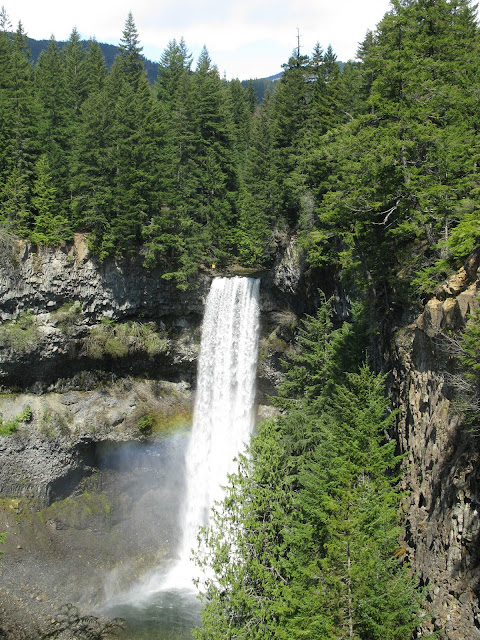 ...where water tumbles 70 meters into the basin below. 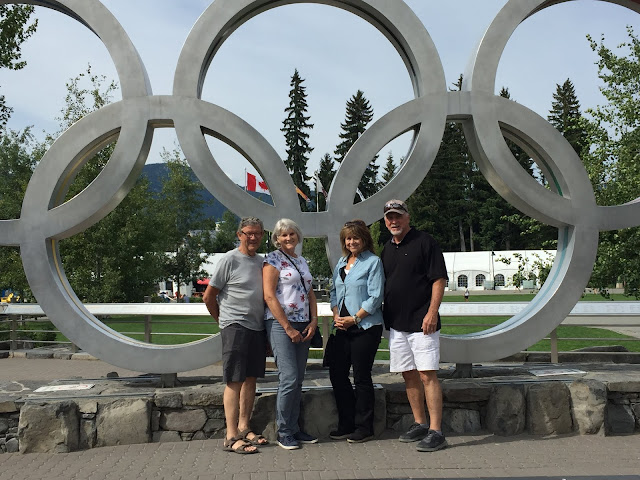 We strolled Whistler Village (and posed at the Olympic Plaza, of course). 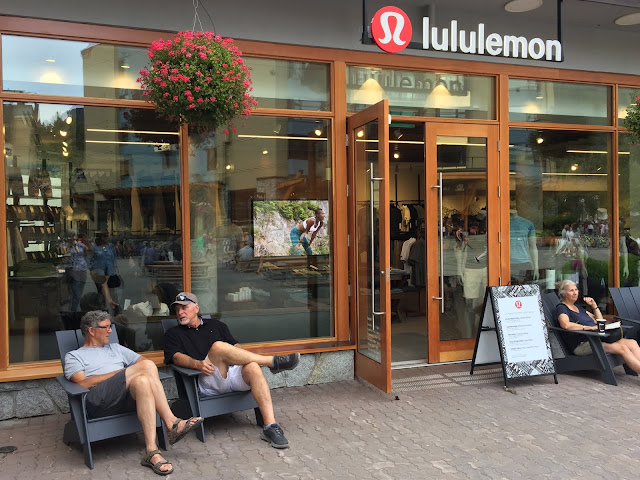 Judy and I checked out a few shops...and the guys visited outside.

We had intentions of riding the peak-to-peak chair while we were in Whistler, but the weather never co-operated. (There is no point in going up into the clouds.) 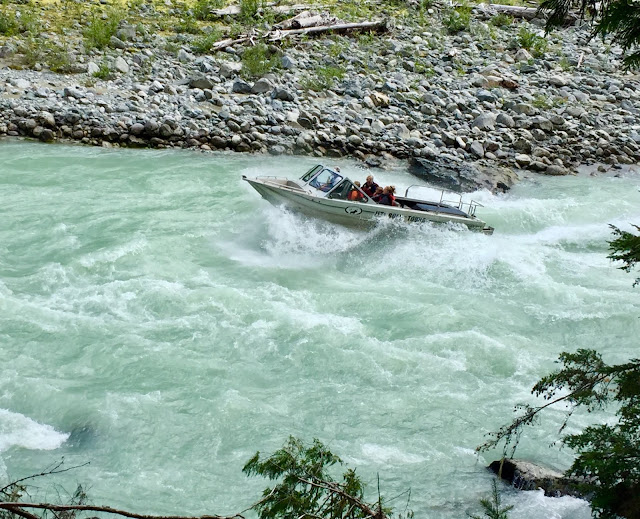 We carried on towards Pemberton, and hiked to Nairn Falls.  What a surprise to see a jet boat on the river...just beneath the falls. Some people live dangerously. 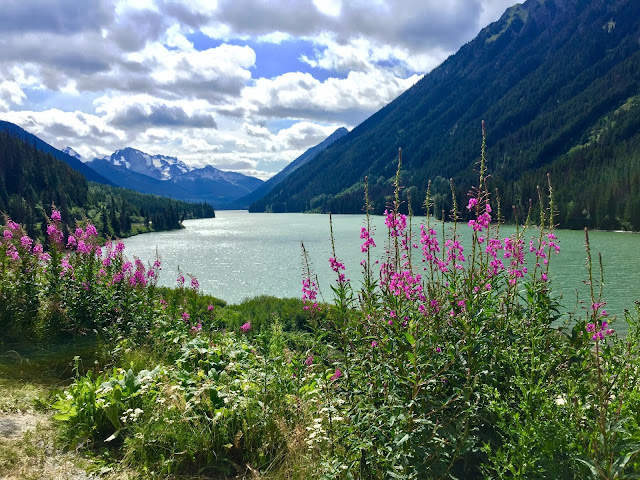 We came home via the Coast Mountain Circle Route...through Lilloette, Lytton and Hell's Gate...where the Fraser River rushes through the canyon. 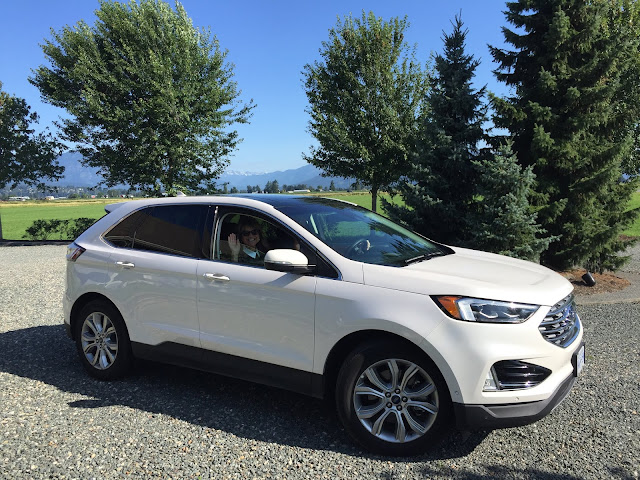 Their visit was over before we knew it, and we waved our goodbyes.  But we know we will meet again! 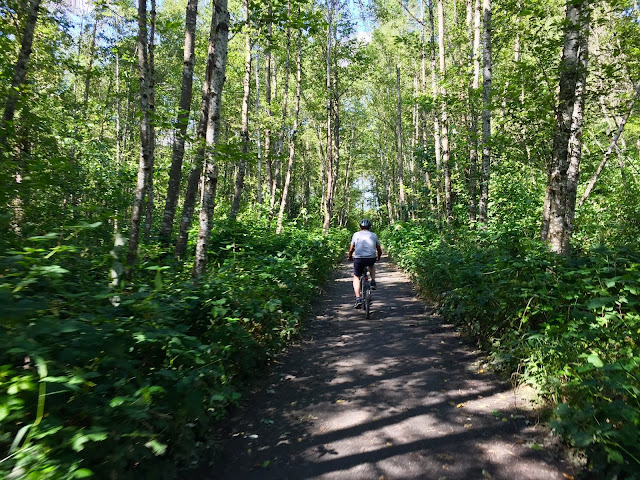 We cycled a few 'new to us' trails this month.  One of those took us through the Brown Creek Wetlands and on to Yarrow...for ice-cream at the Mighty Moose, of course! 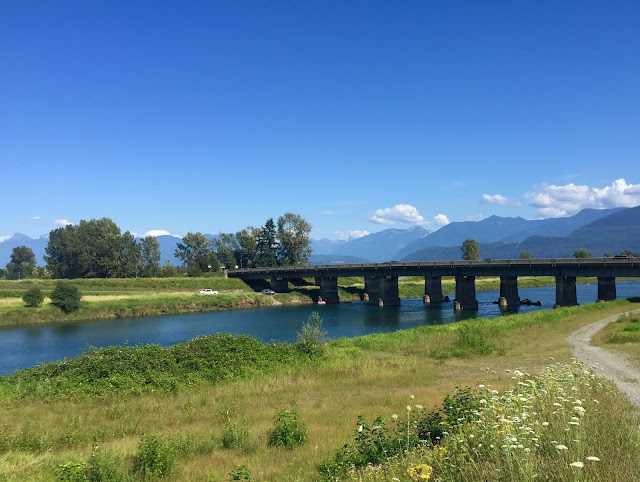 Last Sunday we rode the dykes along the Vedder Canal... 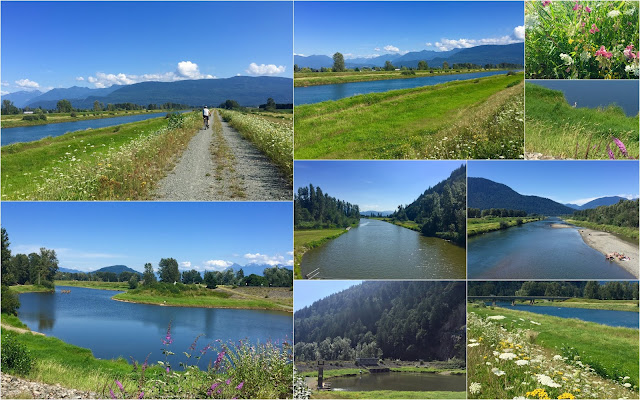 ...from the Keith Wilson Bridge all the way to MacDonald Park in Abbotsford. The skies were blue...the sun was shining...the wildflowers were blooming...and we had the trail mostly to ourselves. 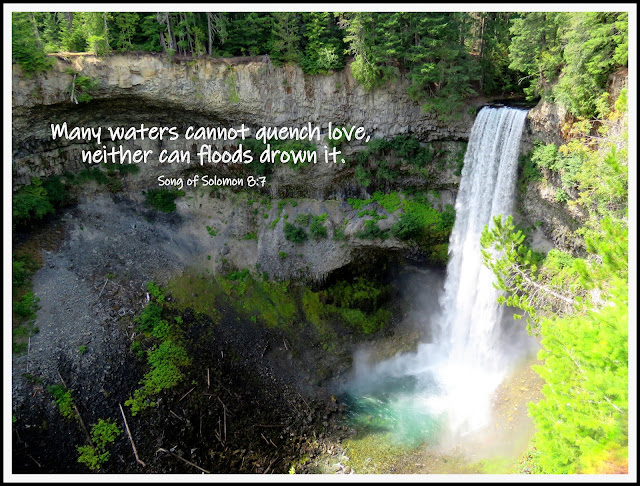 Today is our 48th wedding anniversary...so let me end my July post with a photo taken last week at Brandywine Falls and the verse that we chose for our wedding day. Today I am thankful for my husband and for all the blessings over these many years.  We know the verse to be true...and look forward to getting old (I should say 'older') together.  LOL

Thanks for stopping by and 'happy August'!