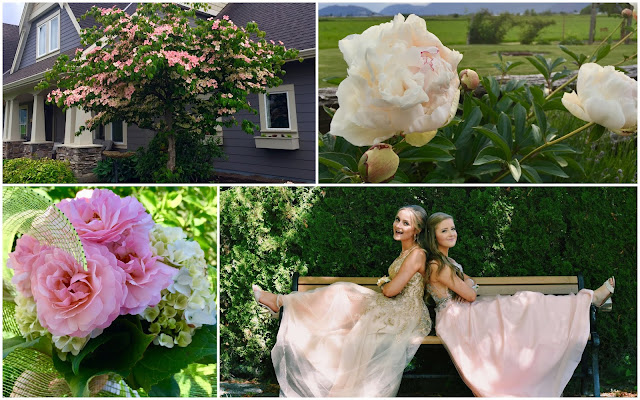 June was filled with many good things from beginning to end, including year end recitals for the grands and Emme and Spencer's high school graduation.  Let me go back to the beginning of the month and re-cap a few of the happenings. 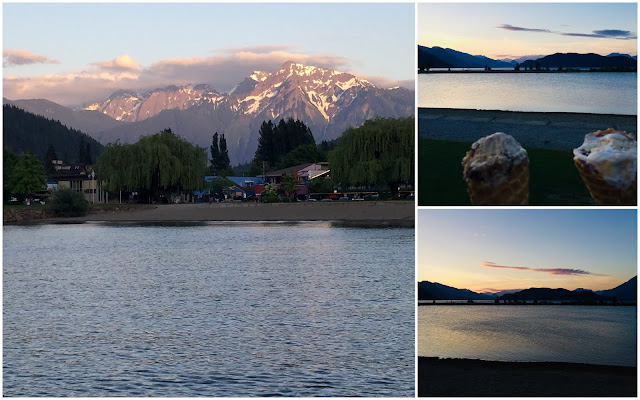 June 1st called for a drive to Harrison Lake and ice-cream cones on the beach as the sun set. 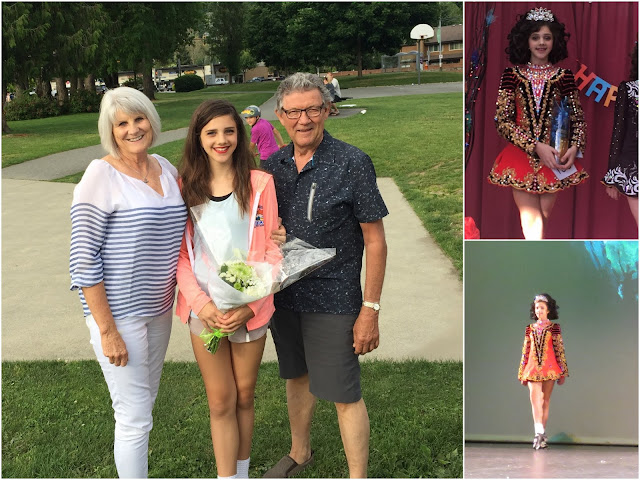 On June 2nd, we cheered Ranen on at her year end Irish dance recital at the Abbotsford Arts Centre. She has had a wonderful year of Irish dance, and is accumulating first place trophies.  This week she will be competing in the North American Irish Dance Championships at Vancouver Convention Centre. We'll be there! 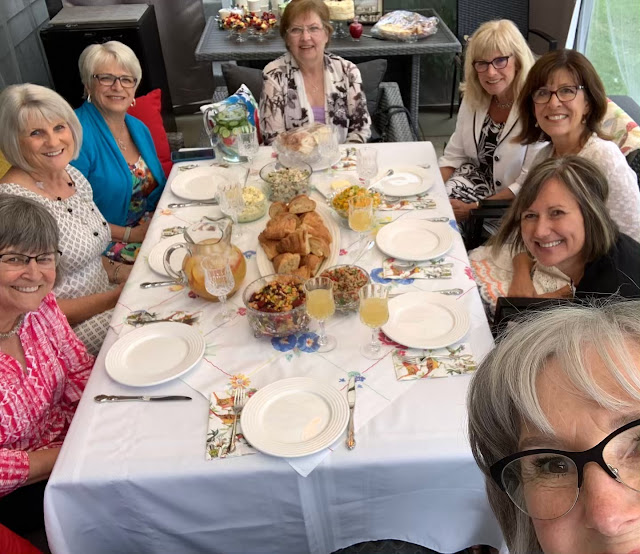 How better to start off the month of June than at a garden party with good friends?  Lovella hosted us in her beautiful backyard tent...a celebration of her milestone birthday and of eleven years of friendship as Mennonite Girls Can Cook. Salads, scones, and a dessert bar.  Midday. How special is that? I am so thankful for the journey we have been on together and the friendship we have enjoyed over these many years. Definitely a gift from God! 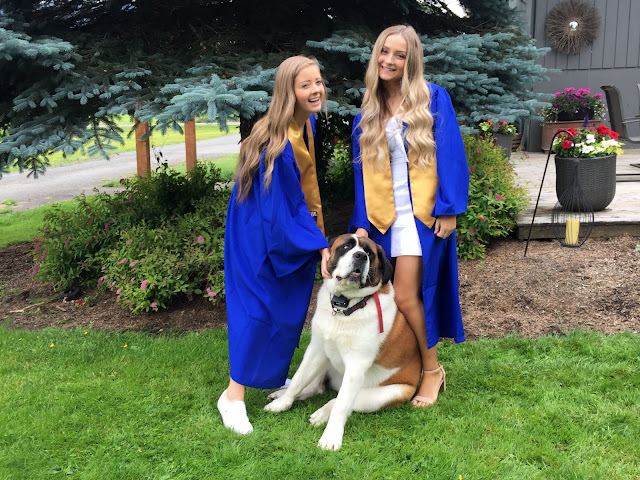 On the 8th of June, Emme and Spencer graduated from grade twelve.  Where have the years gone? 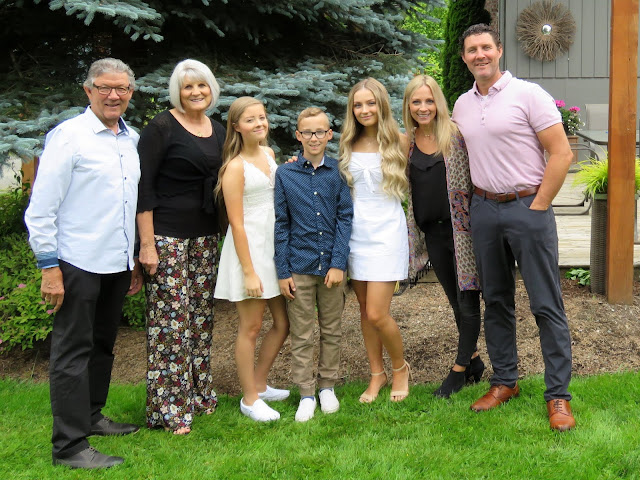 We went over to take a few pic's before the ceremony... 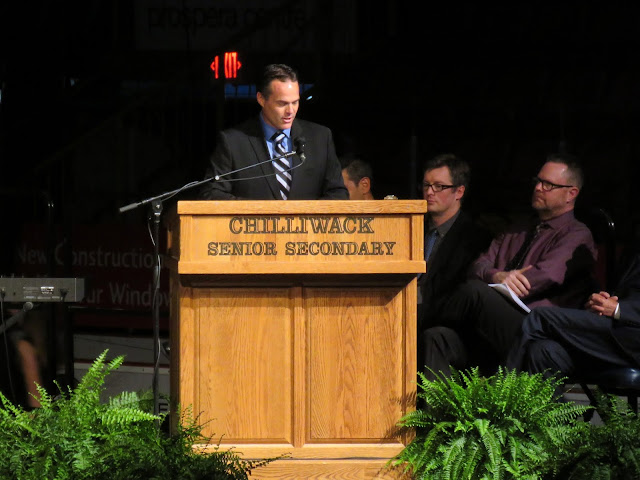 ...which was at Prospera Center in Chilliwack.

Giving diplomas to more than 300 students takes awhile.
When they are handed out in alphabetical order and your name starts with W...
it takes almost three hours! 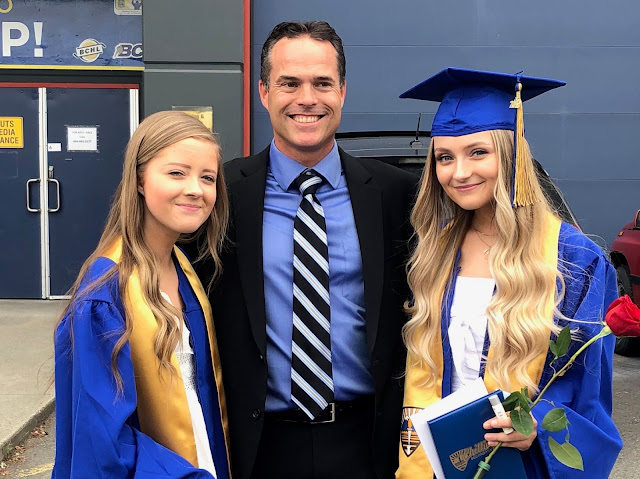 I love this photo of the two of them with their high school principal, Mr. Fehlauer.
I knew him as Brian and he spent a lot of time in our home decades ago...
as the best friend of the girls' dad.
How special to receive their diploma from him.

Fast forward to their prom and grad party...which was just a few days ago. 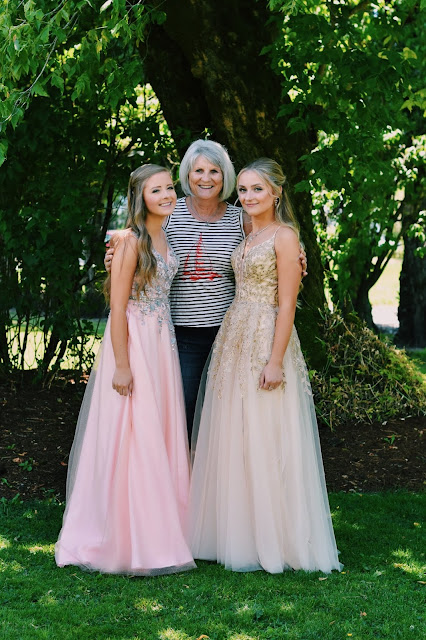 I slipped next door to see them in their dresses before they left for their official events. 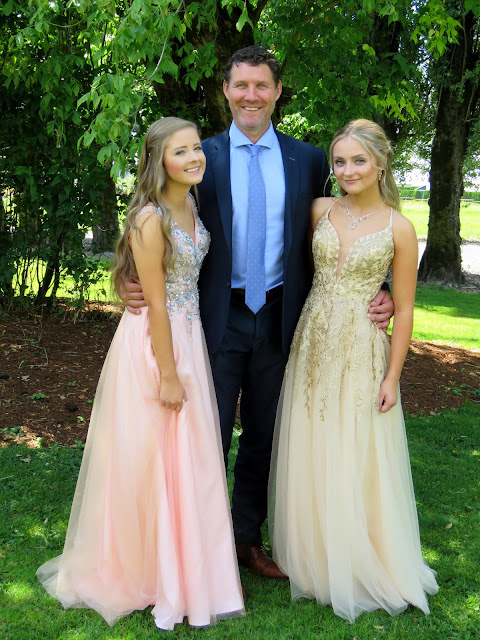 Their dad came in from the farm and got cleaned up in the middle of the day to pose with his girls.
His work clothes didn't quite cut it! 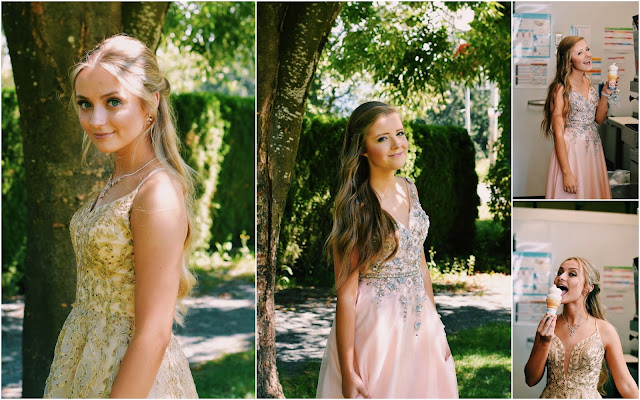 Let me add a few pic's taken by their friend Jessica, who followed them around all day.  Of course they made a stop at DQ for an ice-cream and some pic's with their co-workers there.  I can hardly believe how these years have flown by, and wish for them every success and much wisdom as they go from here. Did I say that they are lovely both inside and out? 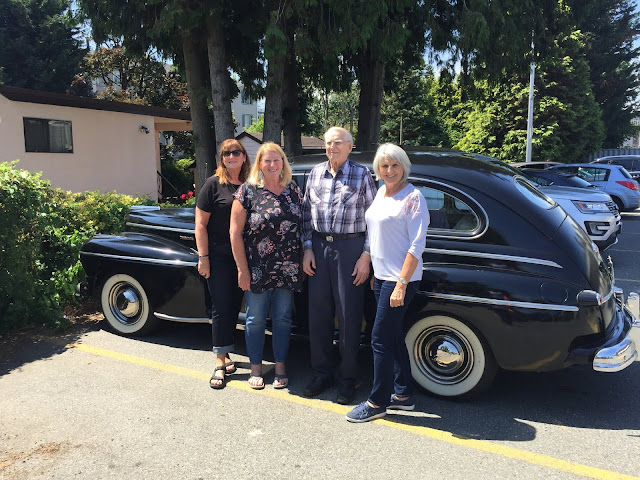 For Father's Day we took dad out for brunch...the three sisters (and spouses) who live nearby.  We picked him up in 'his' '47 Monarch, which was the highlight of the day for him. 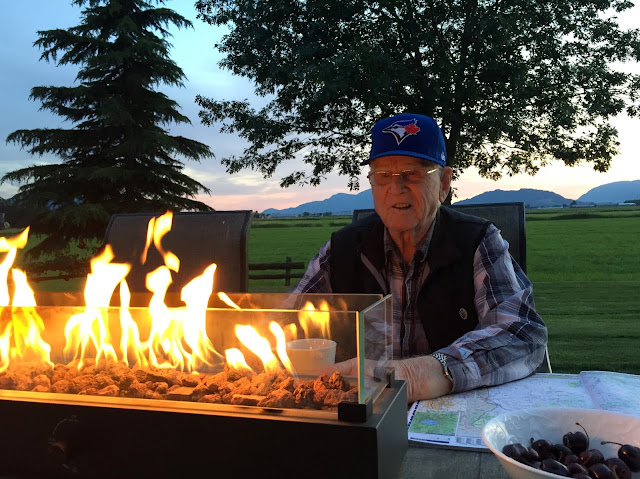 Another evening, we sat on the back patio with dad, listened to his stories and ate cherries until the sun went down.  How blessed to still have my dad at age 96 (almost 97). 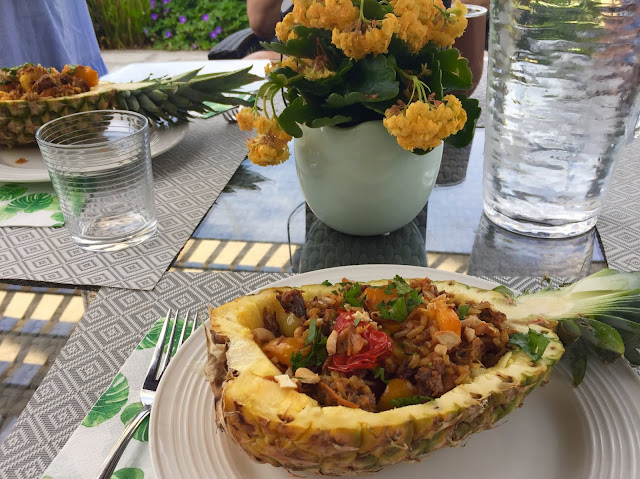 Kris and Lina had us over for Father's Day dinner on their patio.  How special is that...pulled pork medley in a pineapple boat?  And delicious too! 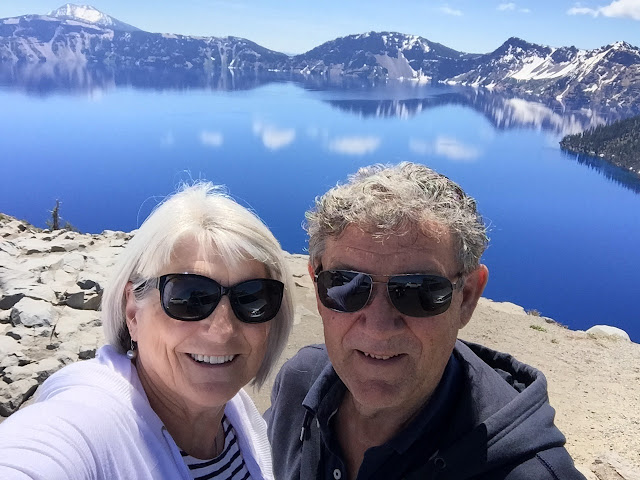 We were looking forward to adventuring in our motor home again this summer, and spent a lovely week in Oregon...the Columbia River Gorge, Bend area and Crater Lake...documented right here. 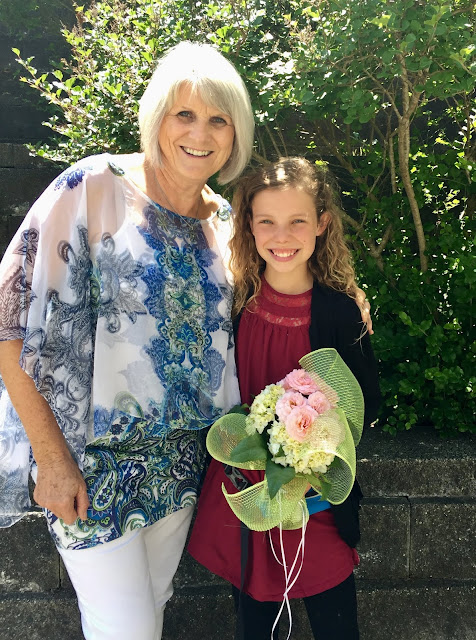 I was back just in time to be Maggie's honoured guest at her grade five grad.  She will be in middle school next year. 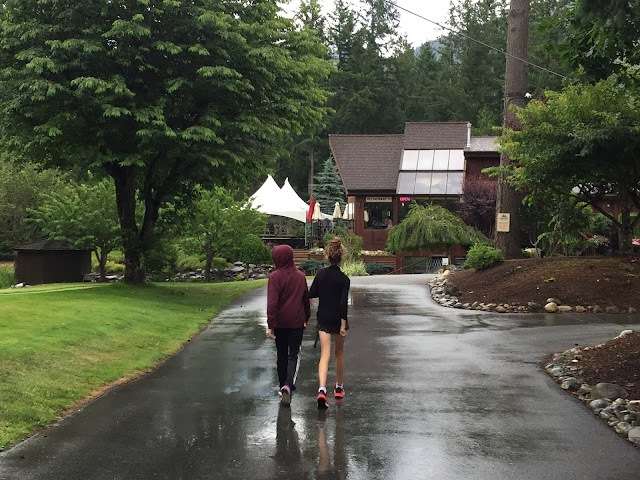 We planned to take Ryder and Maggie on a year-end outing to Tap-ins golf course, but when we arrived there (at the end of a very hot and humid day) the skies opened up and it poured. Oh well, we went to Legends Bistro to eat instead... 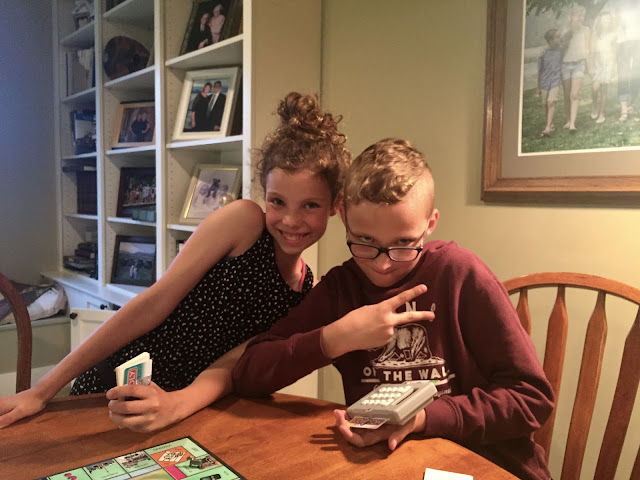 ...and then home to our place for a marathon game of Monopoly (Canadian version). In the end, Maggie owned it all! 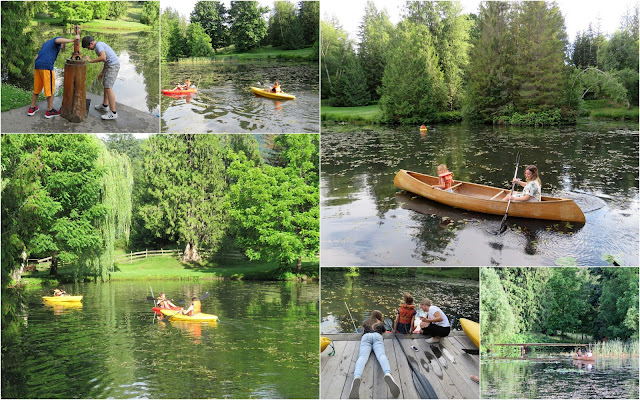 Last night we met for a picnic at BenAnna Lake with the whole family.  It was a wonderful evening...but a little bittersweet since it was likely the last time we will be picnicking there, since the property has been sold.  For many decades we have used this private park on the property of friends, who have always been so generous in sharing their lovely venue.  From reunions, to family gatherings, birthday parties, anniversaries and several weddings...we have many good memories of time spent there.  We are so thankful to the Barg family for sharing BenAnna Lake with us! 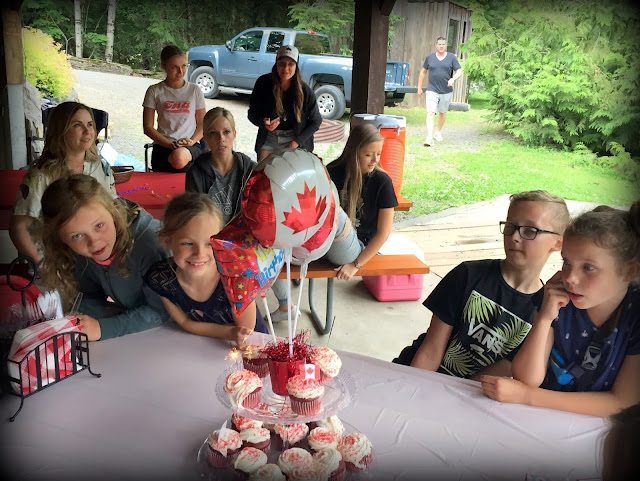 We ended the evening and the month of June, by celebrating a few birthdays (Holly, Lucy, Tim and Jeremy)...and Canada's birthday as well!

Happy Canada Day to you all!