of camping and campfires...

We spent the Canada Day weekend camping in the USA...with all the kids and grands. Despite less than perfect weather (cold and damp)...long border line-ups....and a medical issue or two...a good time was had by all. 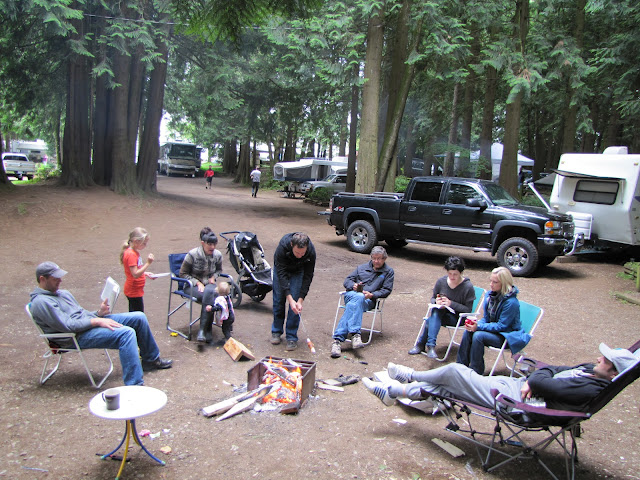 Camping and campfires go together, right? As we were about to leave on our camping trip...hubby reminded Jeremy to grab some firewood from the farmyard to be certain we had enough fuel for the weekend. We spent a good hour and half in the border line-up...awaiting our turn to enter the USA. We knew better than to bring fresh fruit or veggies...and were quite certain we had left all forbidden foods behind in Canada. The customs officer went through the list of offending items and decided we were free to go. Then he had one more question...'Did we have any firewood?' No we didn't, but what if we had? We discovered that we would have to turn around...go unload our wood on Canadian soil...and return to the back of that long line-up. Oh dear. Jeremy had the wood and was not far behind us. Hubby called his cell phone and told him to leave the firewood behind...as he would not be bringing it across the border. What to do? He unloaded it neatly beside the road, and never lost his place in line...and had no problems whatsoever with customs. We all arrived at our campsite just south of the border safe and sound...where we discovered there was firewood to be had...at a price. A dear price, that is!   We enjoyed our campfires...and our campfire food. 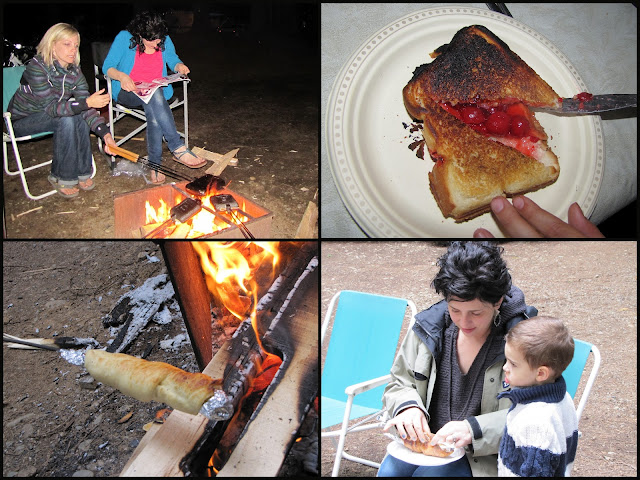 We made bush pies for dessert...some with cherry pie filling and others with nutella, bananas and marshmallows. We cooked smores and cinnamon snakes...and sat around the fire just to stay warm.  By the time Canada Day rolled around...the campground had not one stick of firewood left. What now? Jeremy decided to go find some off site...and he did.  A few pallets and building scraps left at the roadside for for the likes of us did the job just fine.  (What goes around...comes around!)


We chatted with another Canadian camping nearby...who told us he had been turned back at the border because he had firewood. We shared our story...how we had left firewood beside the road to avoid that very thing. And then we had a good laugh. The other camper had noticed a pile of firewood beside the road...free for the taking...as he sat in the border line-up. So he helped himself...only to be turned back at the border. It turns out one can be burned with firewood as well...not just fire!


All that to say...if you plan to camp in the US of A...plan to burn American wood!

Happy Fourth of July to all my American friends.  Enjoy your celebrations...whether or not they include fires or fireworks!