Uruguay is a small country...wedged between Argentina, Brazil and the Atlantic Ocean. Though it is comprised mostly of fertile soil and grassy prairies...we never saw that side of the country. 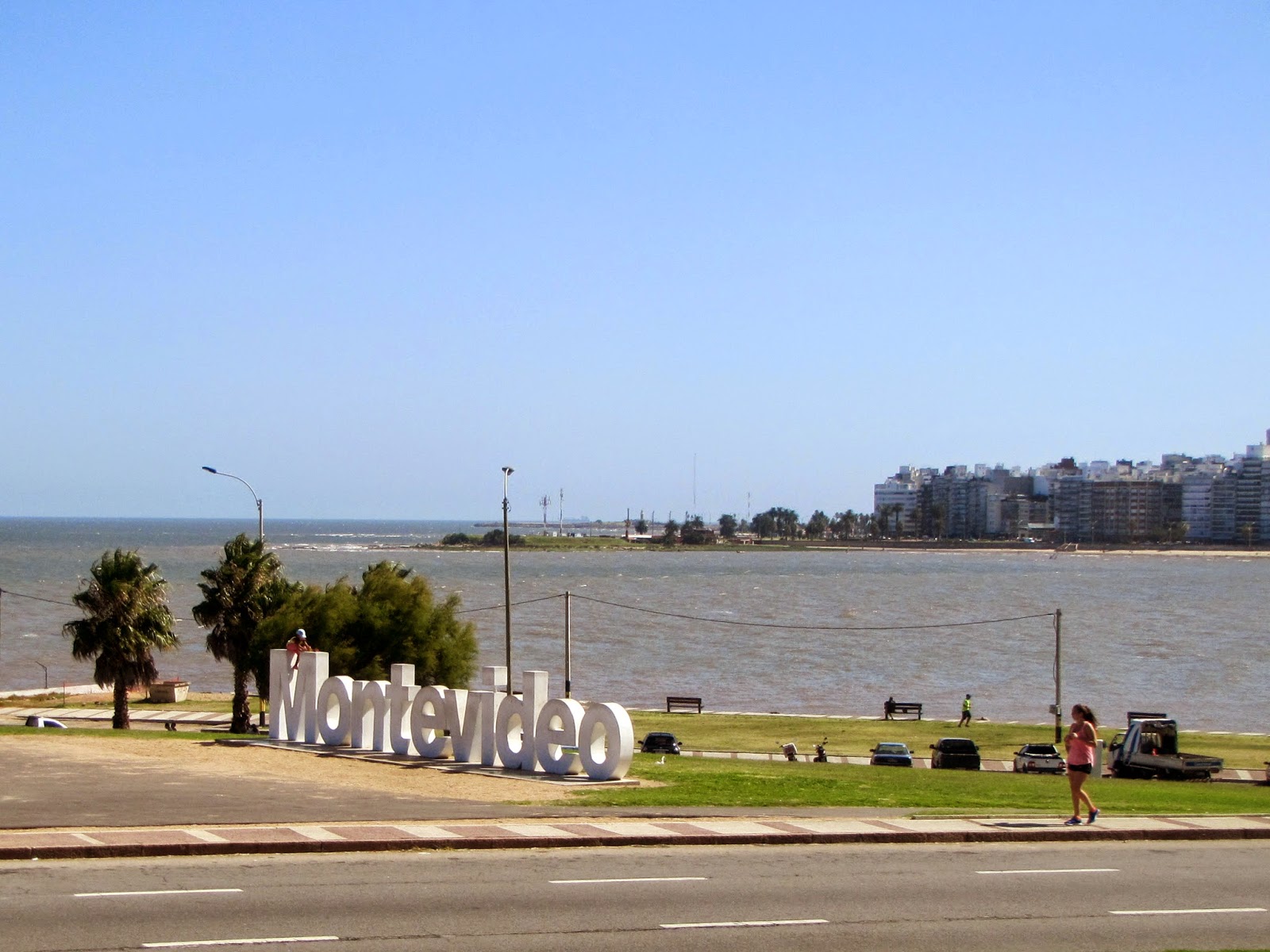 Our port of call was Montevideo...the capital city which has 1.8 million residents (mostly Spanish and Italian). Over half the population of Uruguay lives here. 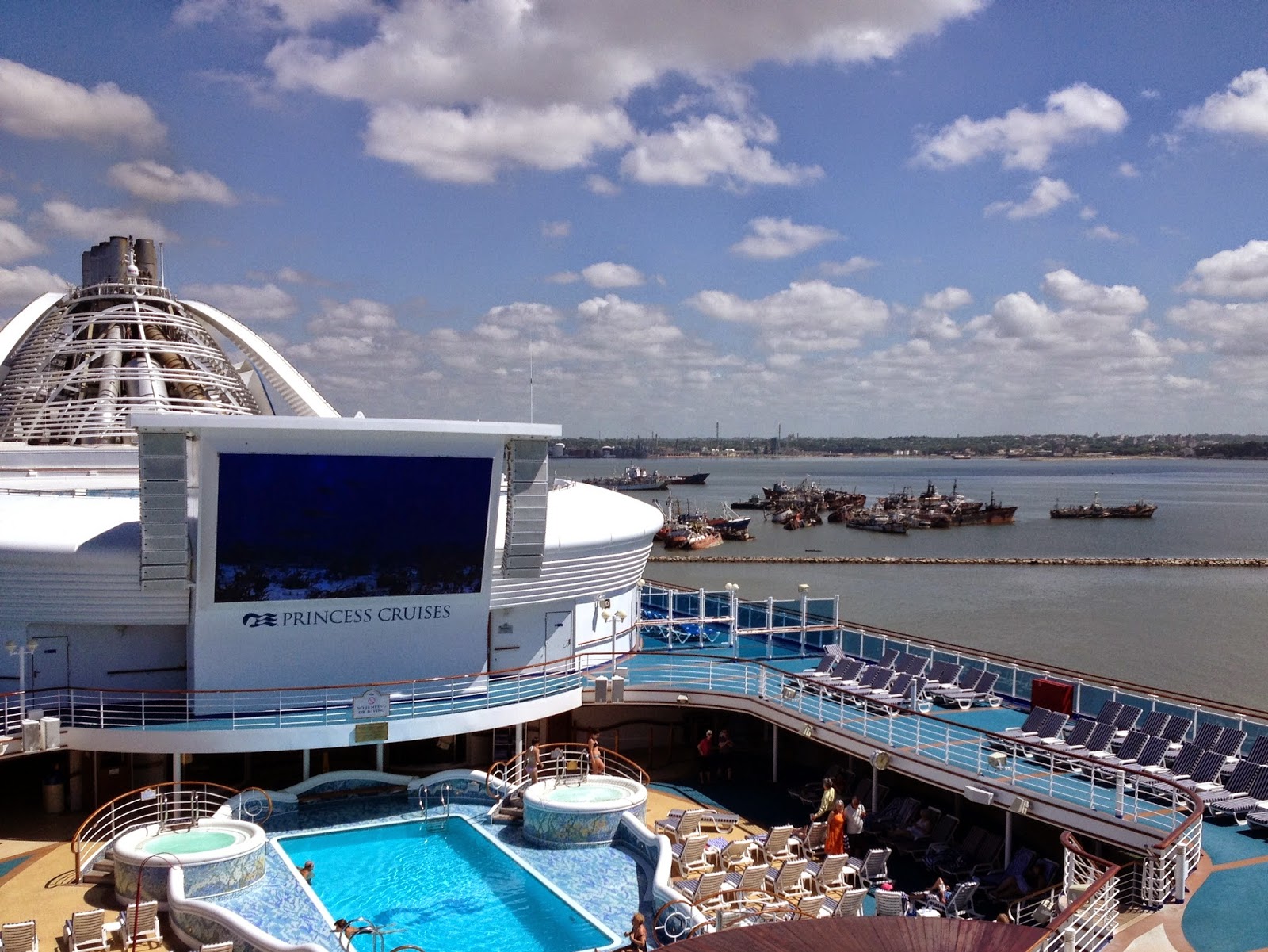 I was looking forward to exploring the city which was the birth place of my good friend, Anneliese .  Her family left the country when she was a child....and she has never returned to visit. 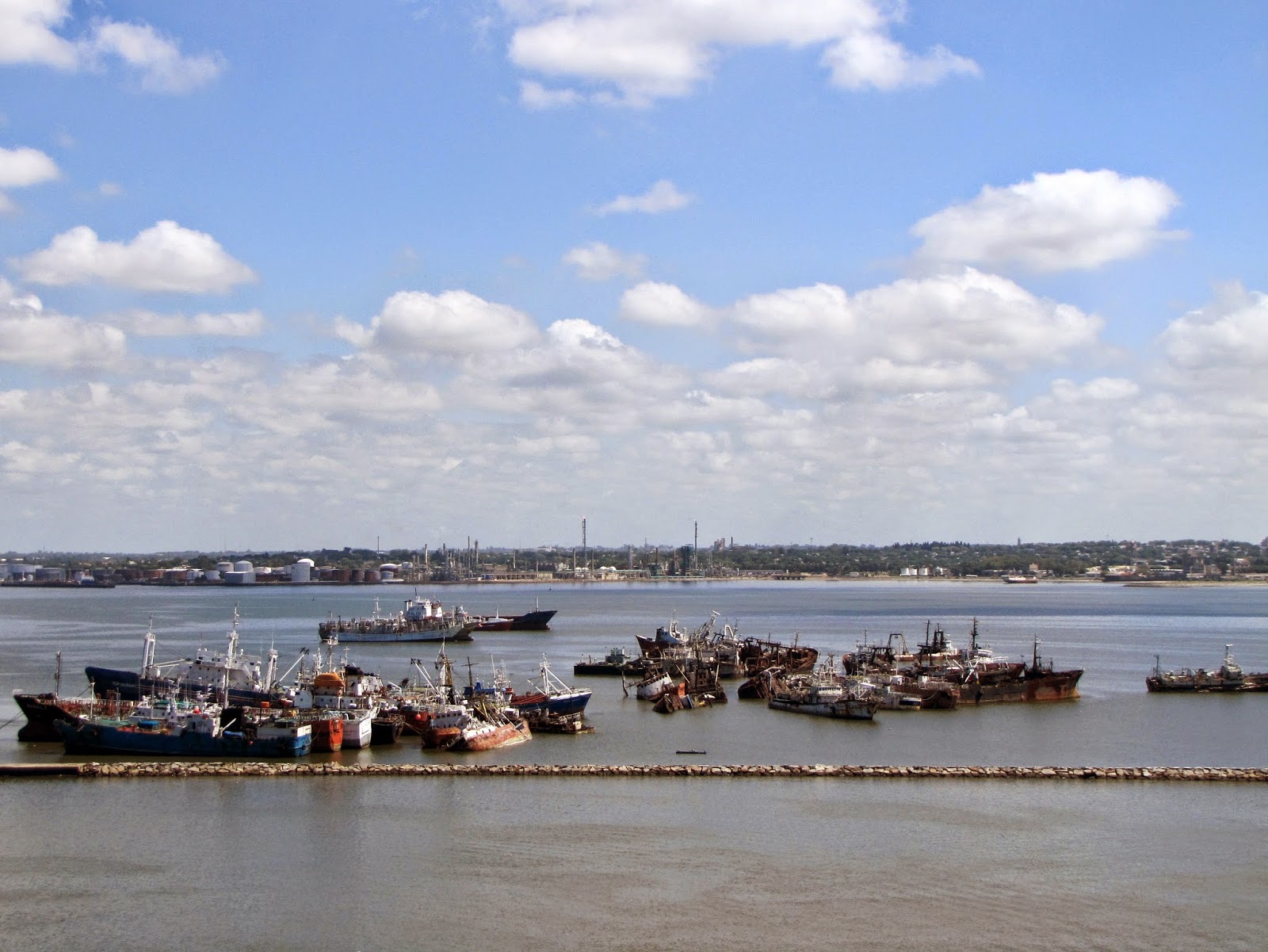 It seems that many boats ran into trouble and there they stayed....right next to the cruise ship terminal.

We went on shore...and took a tour of the city with its 14 miles of beautiful beaches! 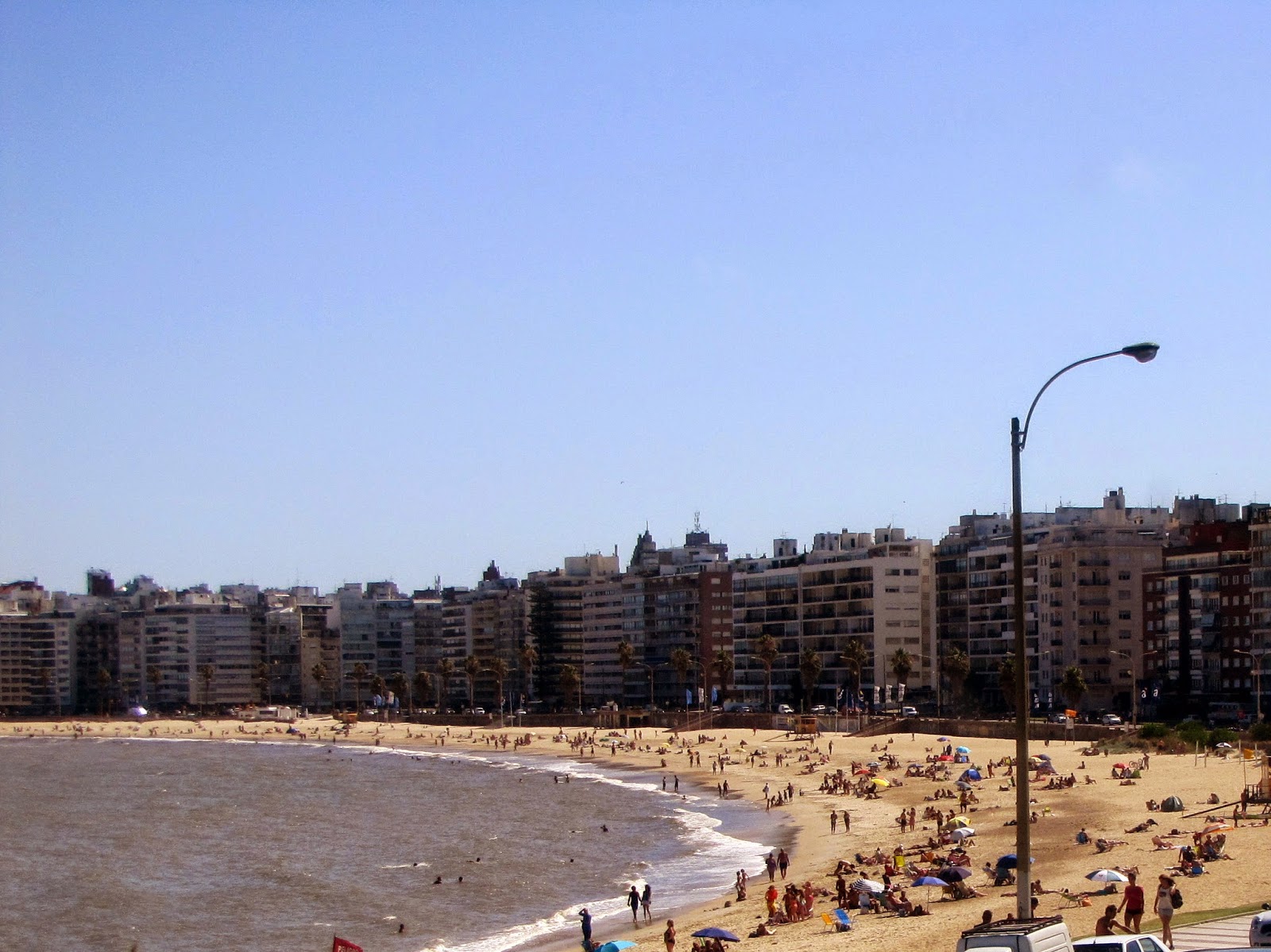 It is a rather lovely old 'seaside' city...though the 'sea' is actually the Rio de la Plata River which is 140 miles across at its mouth.  No wonder it appears to be an ocean rather than a river! It holds an enormous amount of water...since it is the end flow of two rivers (the Uruguay River and the Parana River).  This is the second largest draining basin in South America and carries a huge amount of silt out to the sea. 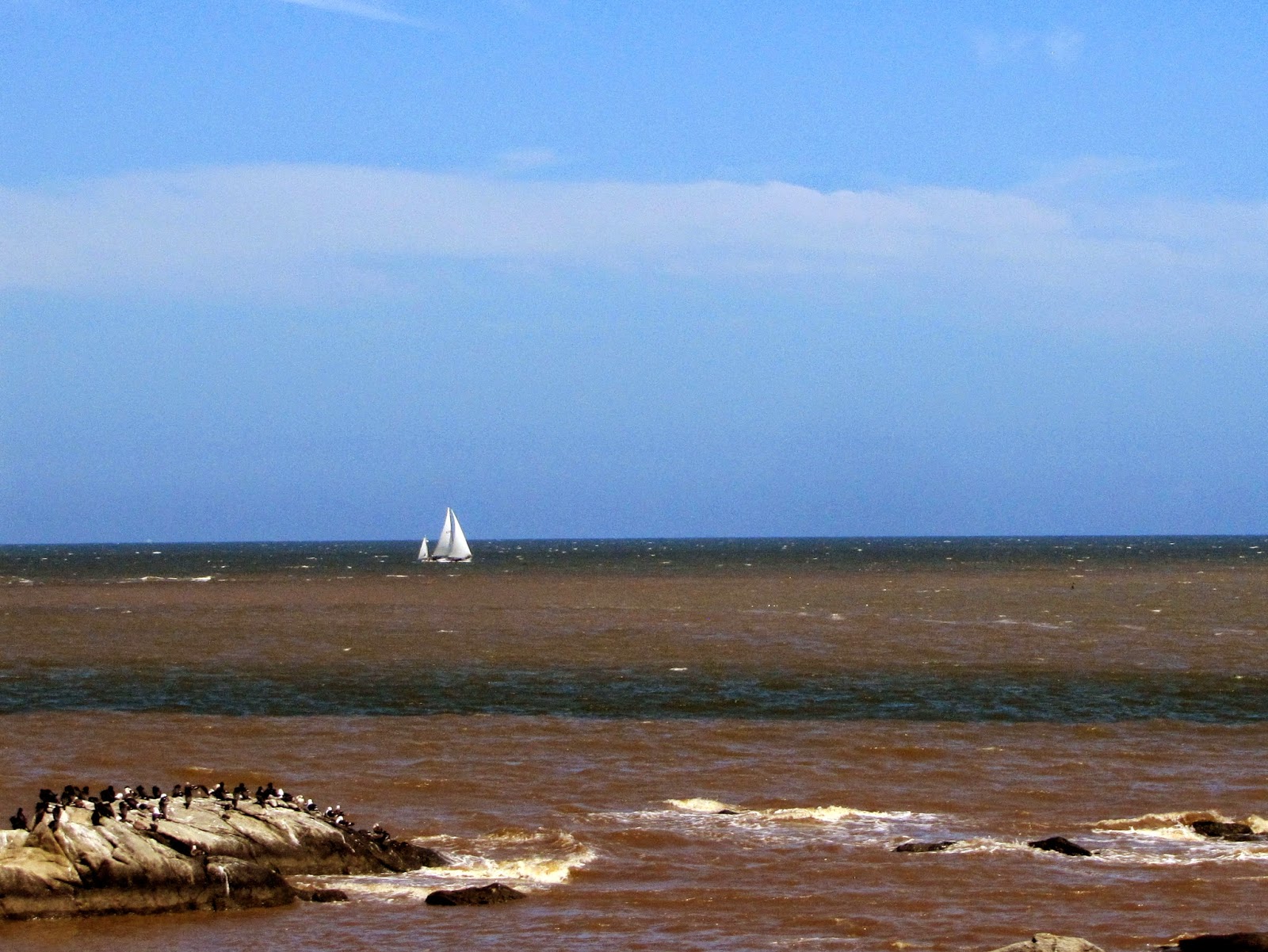 And that explains why sailboats sail on seas of brown...in Montevideo!  Though we saw many people swimming out there...the brown water looked less than appealing to me. 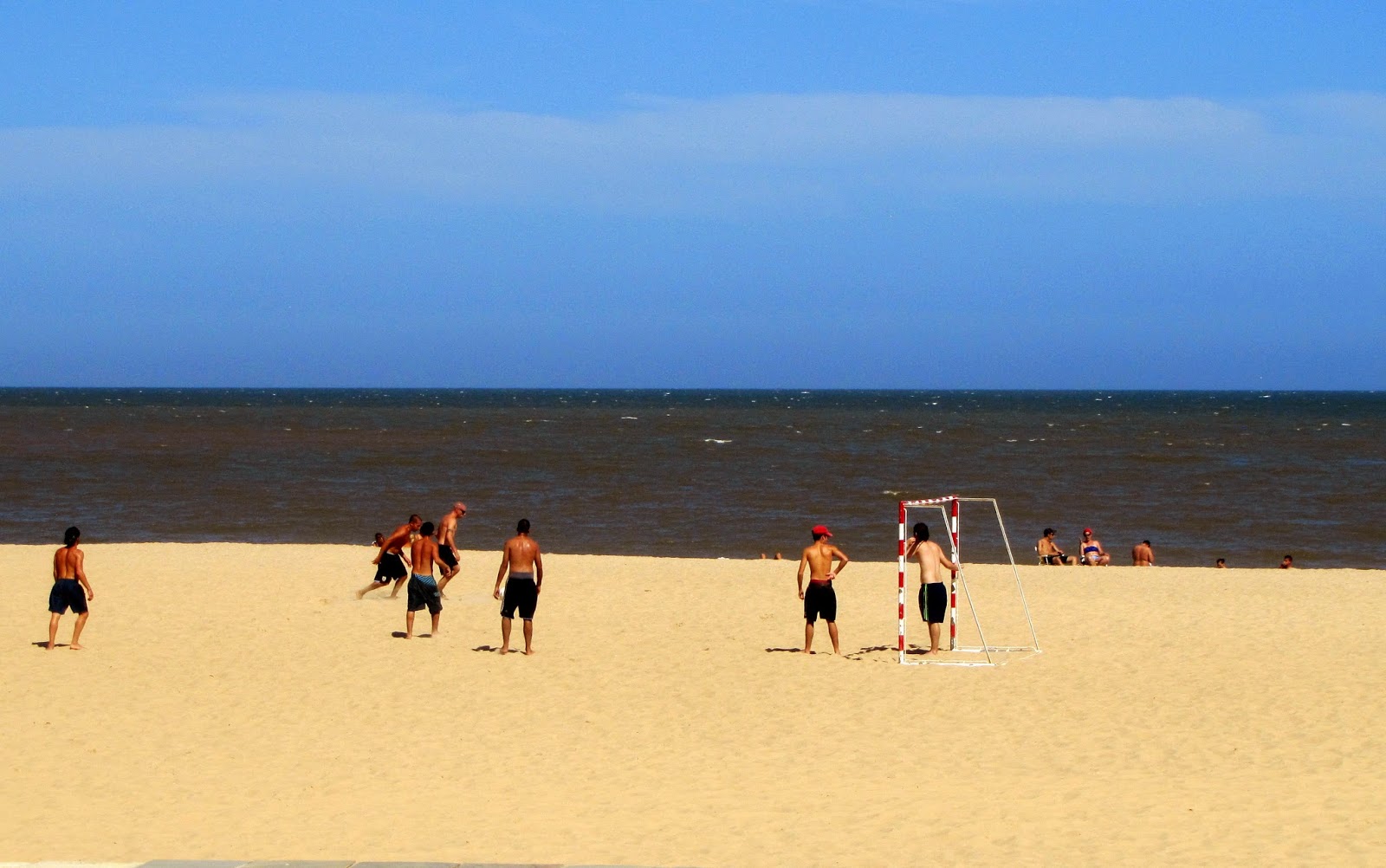 The beaches though were lovely! It was summer vacation while we were there...and it seemed everyone was out on the beach having fun. 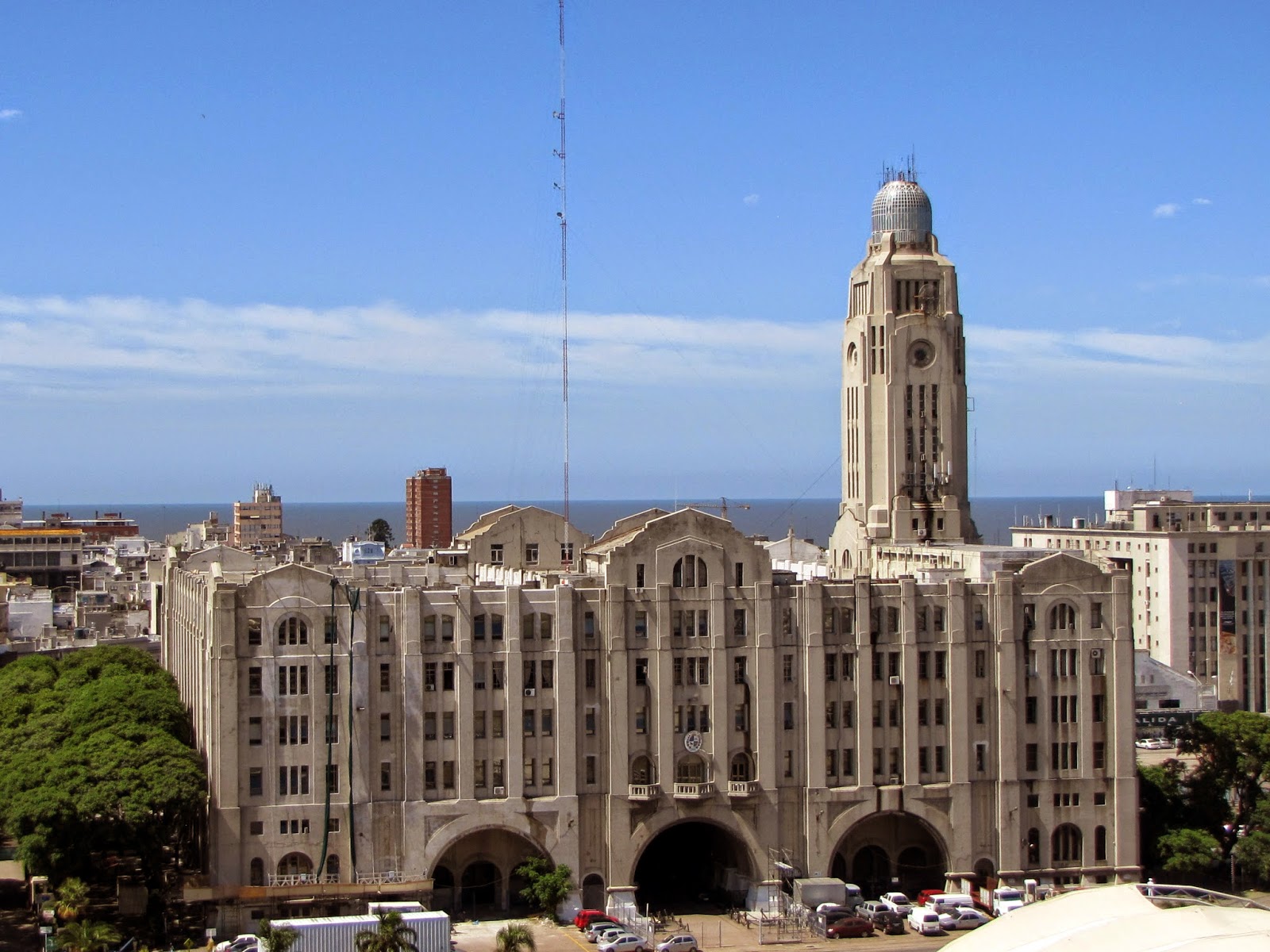 Palacio Salvo is an iconic building of Montevideo...constructed in 1925 and standing 100 meters high...it was South America's tallest building for many decades.  It was originally intended to be a hotel...but is now a mix of residential and commercial space. 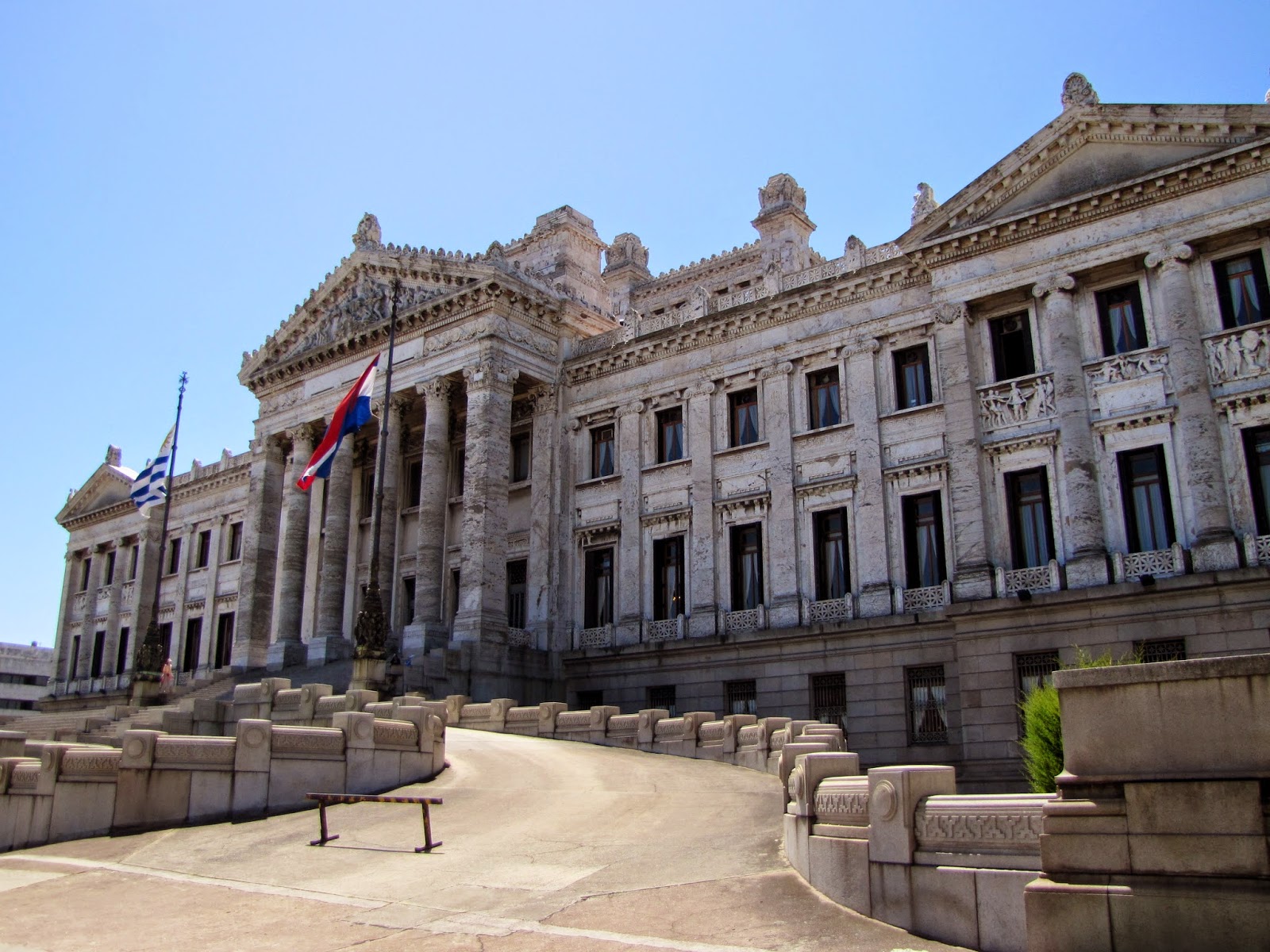 And then there was the impressive Palatio Legislativo (the government building)...also completed in 1925 to mark the 100th year of independence for Uruguay.  Designed by Italian architects...featuring local Carrara marble walls, ceiling murals and gold relief work...the building is a National Historic Monument.  Quite lovely! 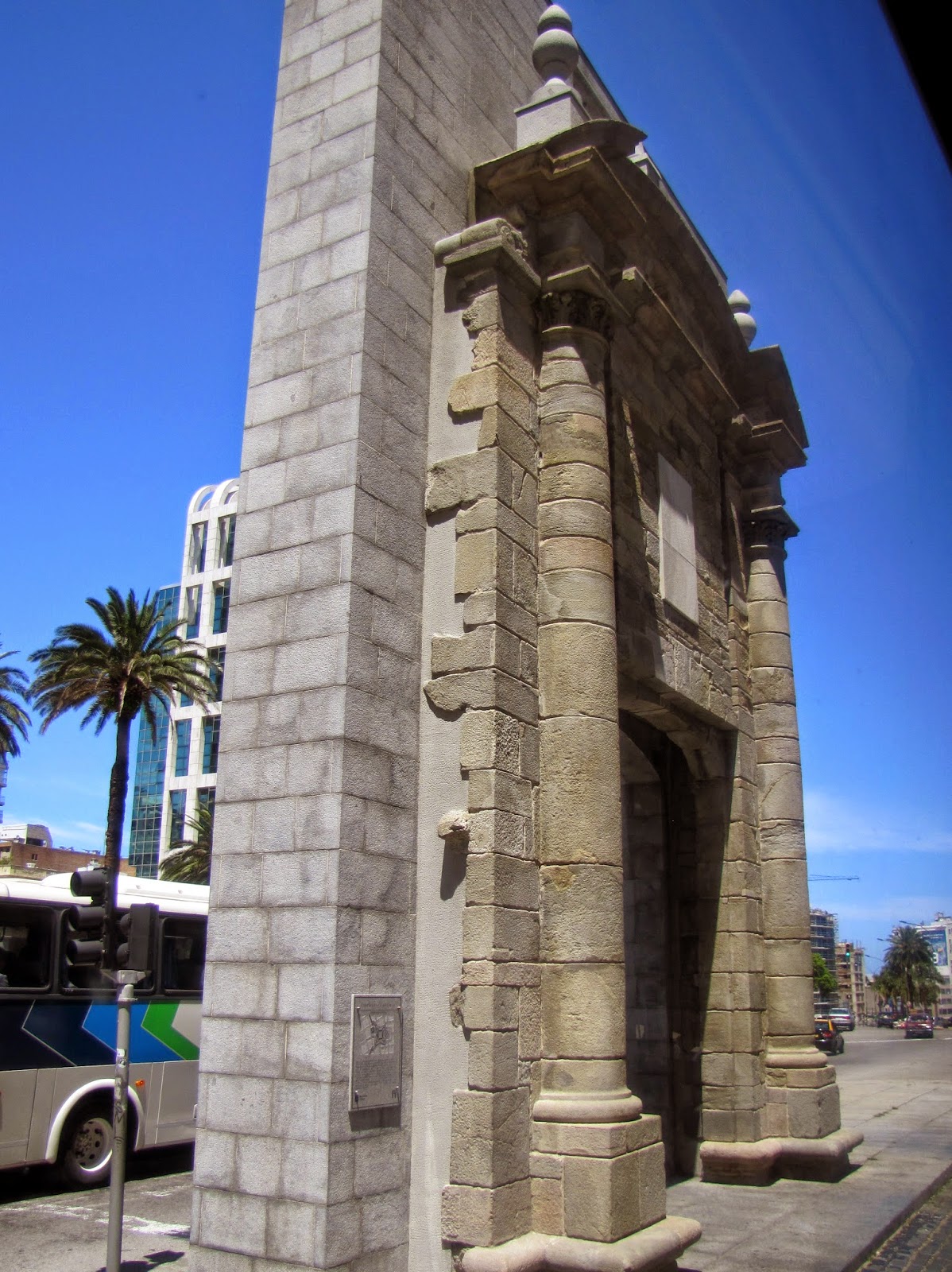 We learned a little of the city's history...that it was founded in the 18th century by the Spanish, and over the years its citizens fought against the British, Spanish and Portuguese for independence, as well as neighboring Argentineans and Brazilians. Today Montevideo is the major commercial center of Uruguay.   We visited Old Town...just steps away from the modern, bustling city square.  All that remains of the old fortified city is the original city gate...which now divides the old from the new. 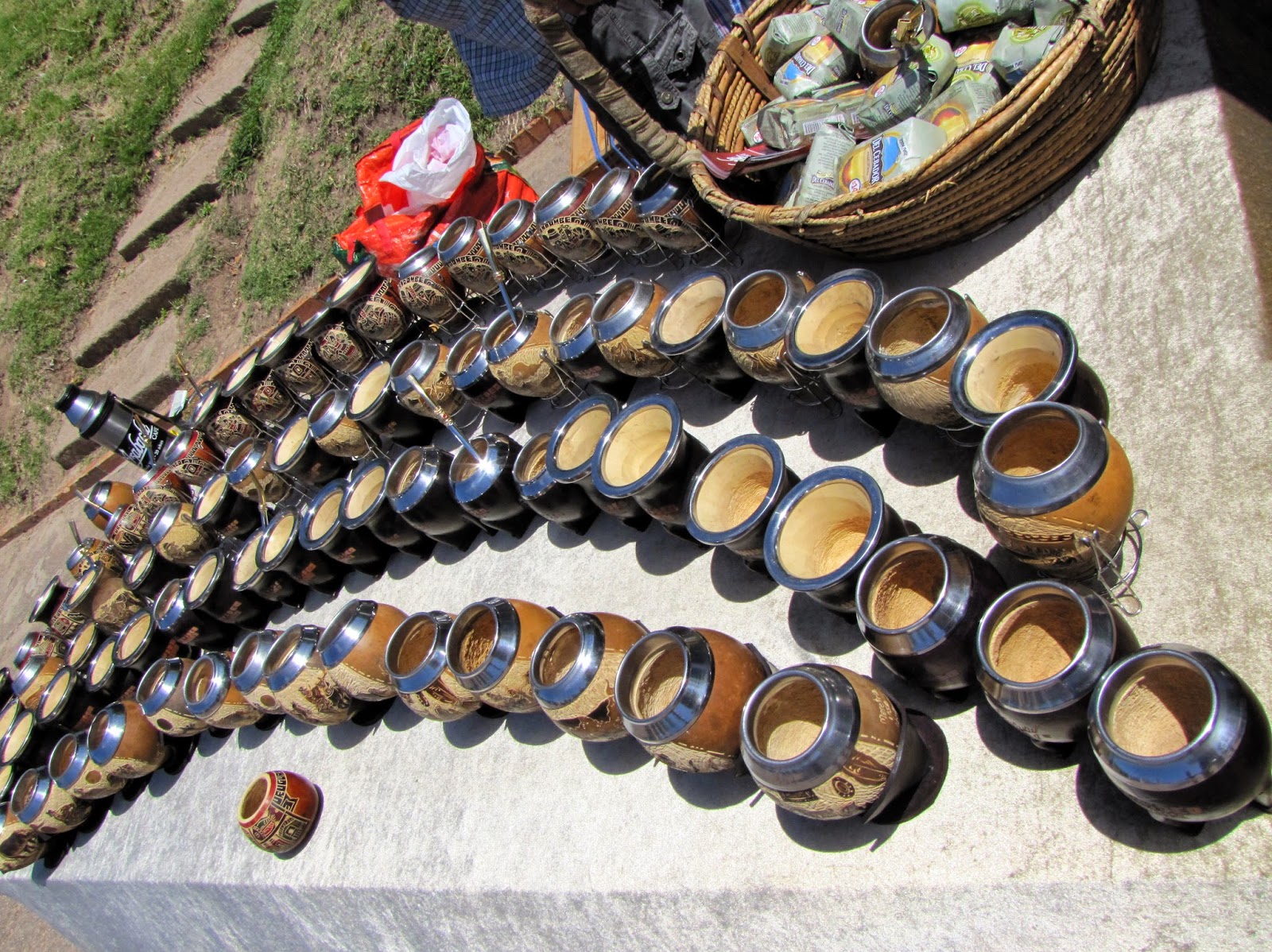 The beverage of choice in much of South America seems to be 'tea' (an infusion, actually).  Not just any tea...but yerba mate.   And it would never do to drink it from a regular mug.  It is steeped in a special gourd called a guampa...then sipped through a bombilla (straw with a filter on the end). I couldn't resist bringing home a souvenir for my son-in-law...who would feel right at home in Montevideo, sipping on his favorite beverage! 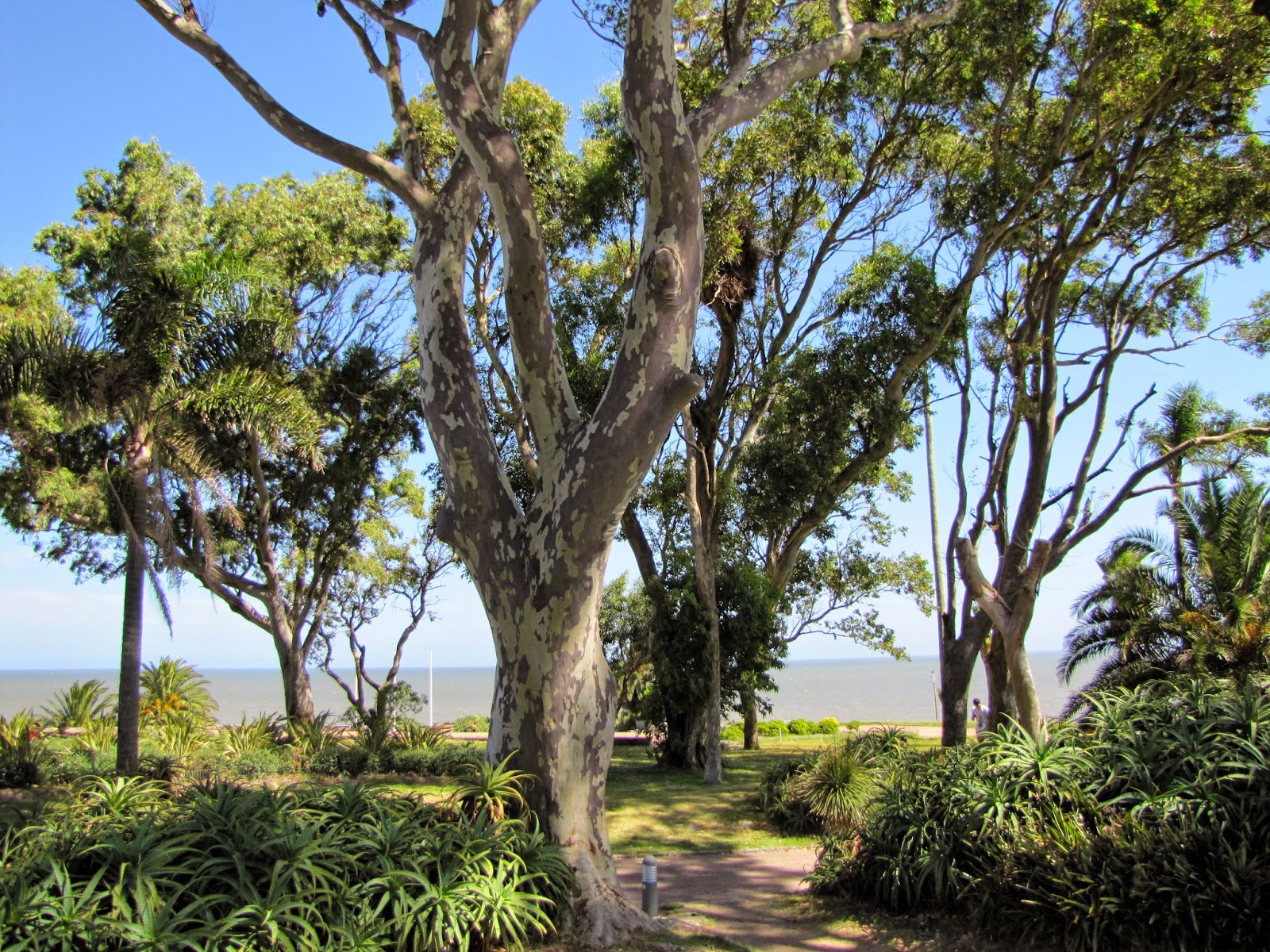 As for trees...we mostly saw eucalyptus or palm trees.  The eucalyptus trees were introduced to Uruguay from Australia in the late 1800's...and have been a boon to the economy. 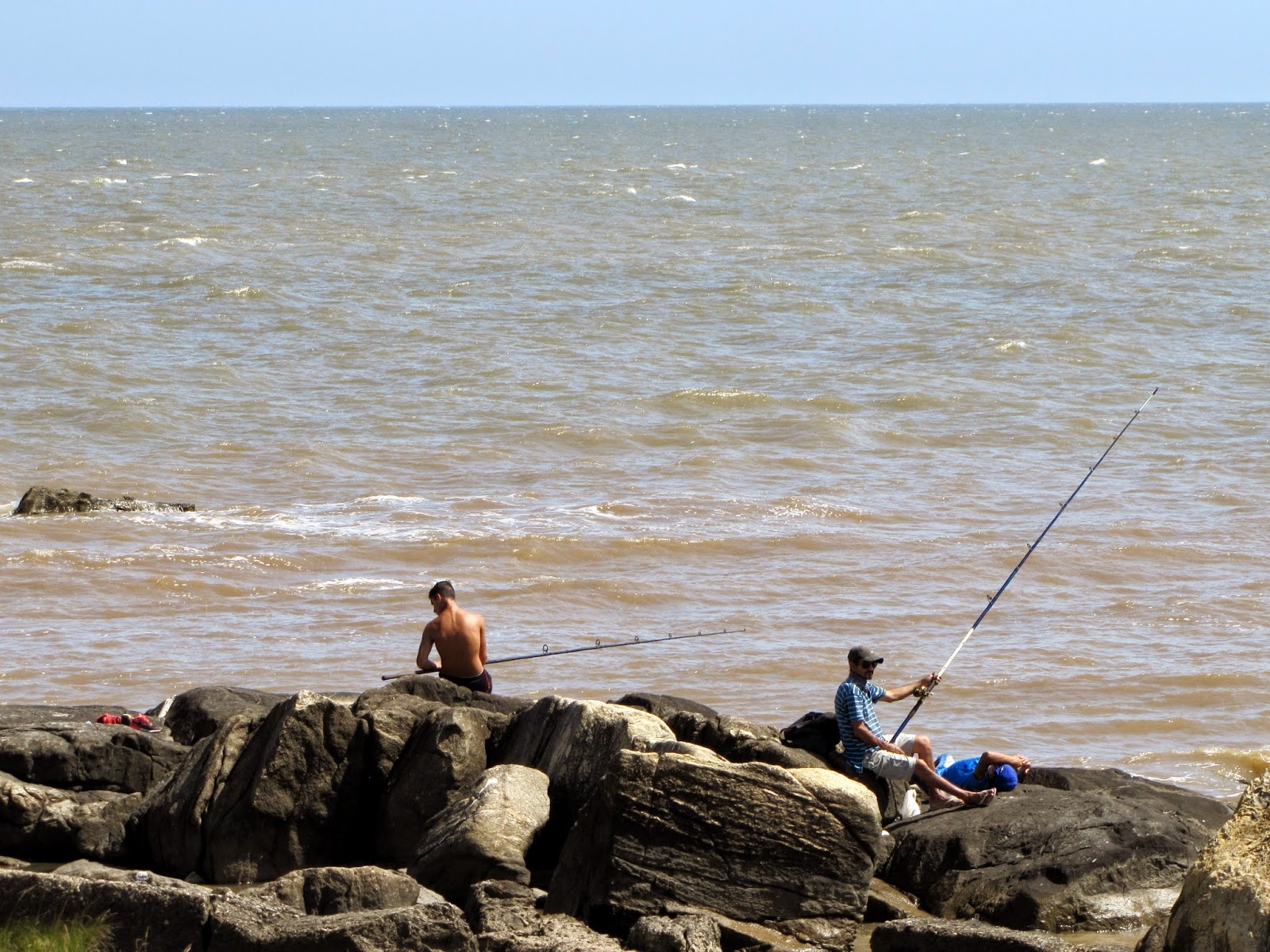 Apparently the fishing in Uruguay is good as well...though these fishermen never looked too serious about their sport! 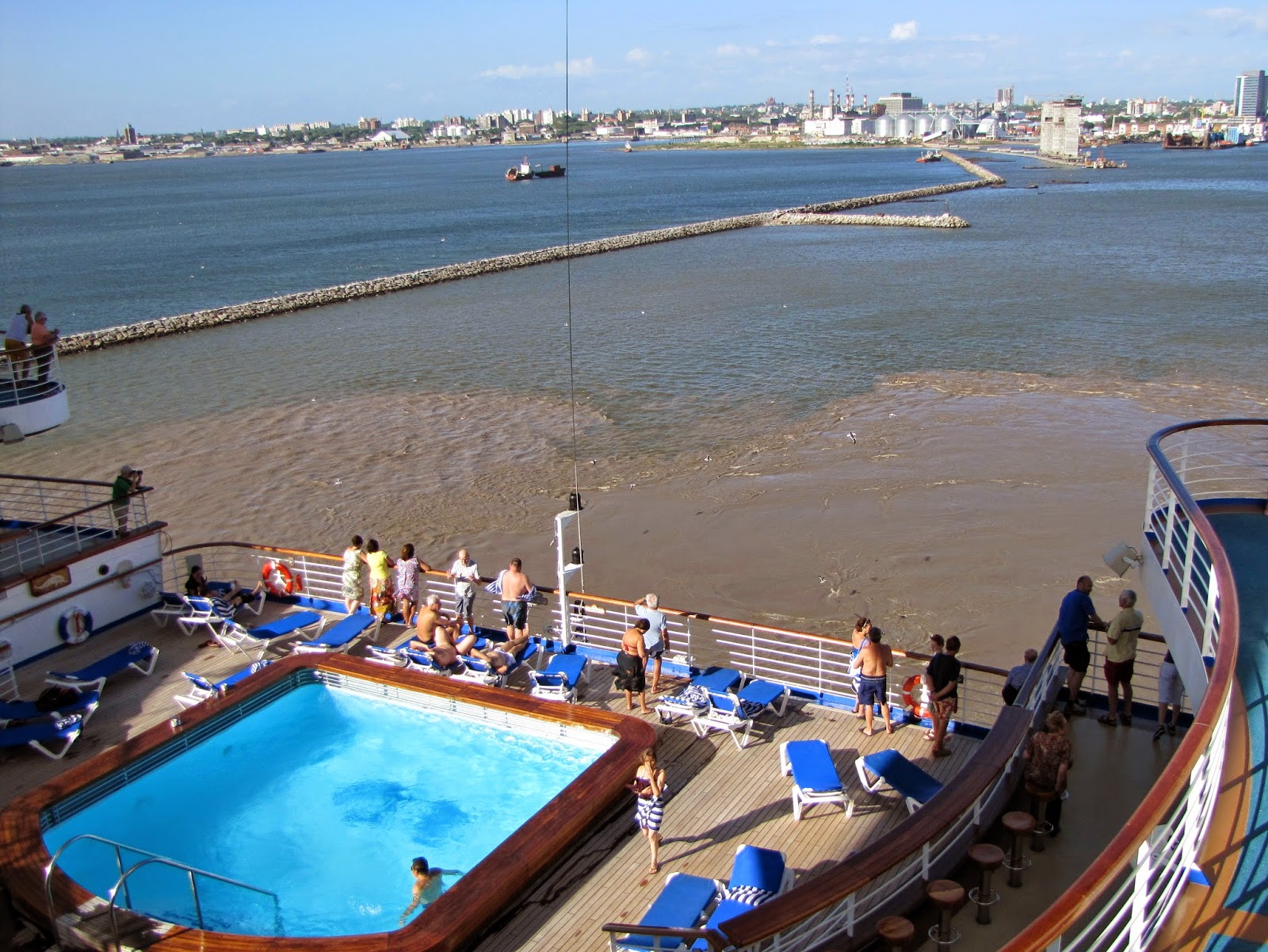 Our time in Montevideo was over before we knew it......and a tugboat showed up to push us out to sea. 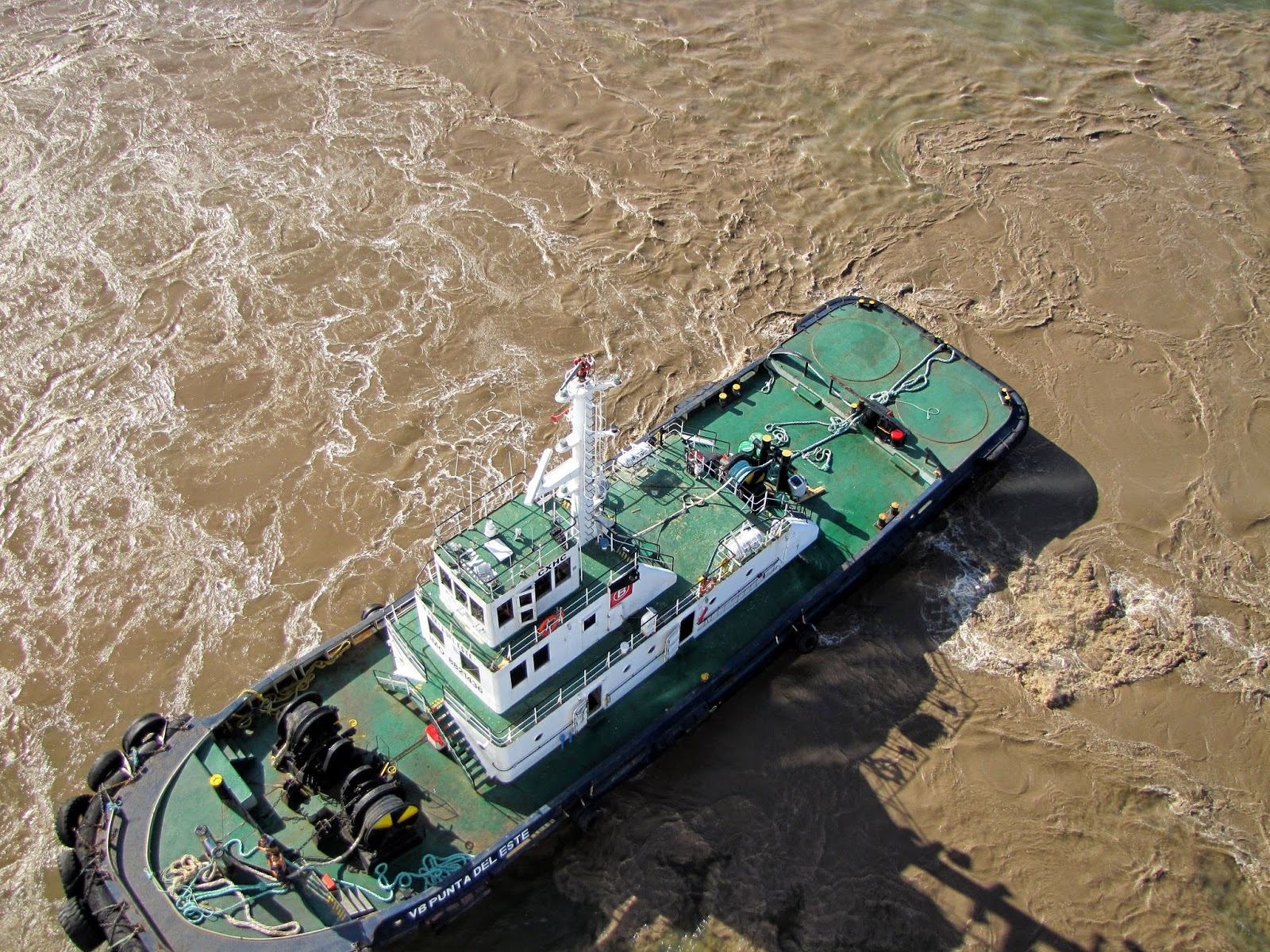 See what I mean about muddy water? 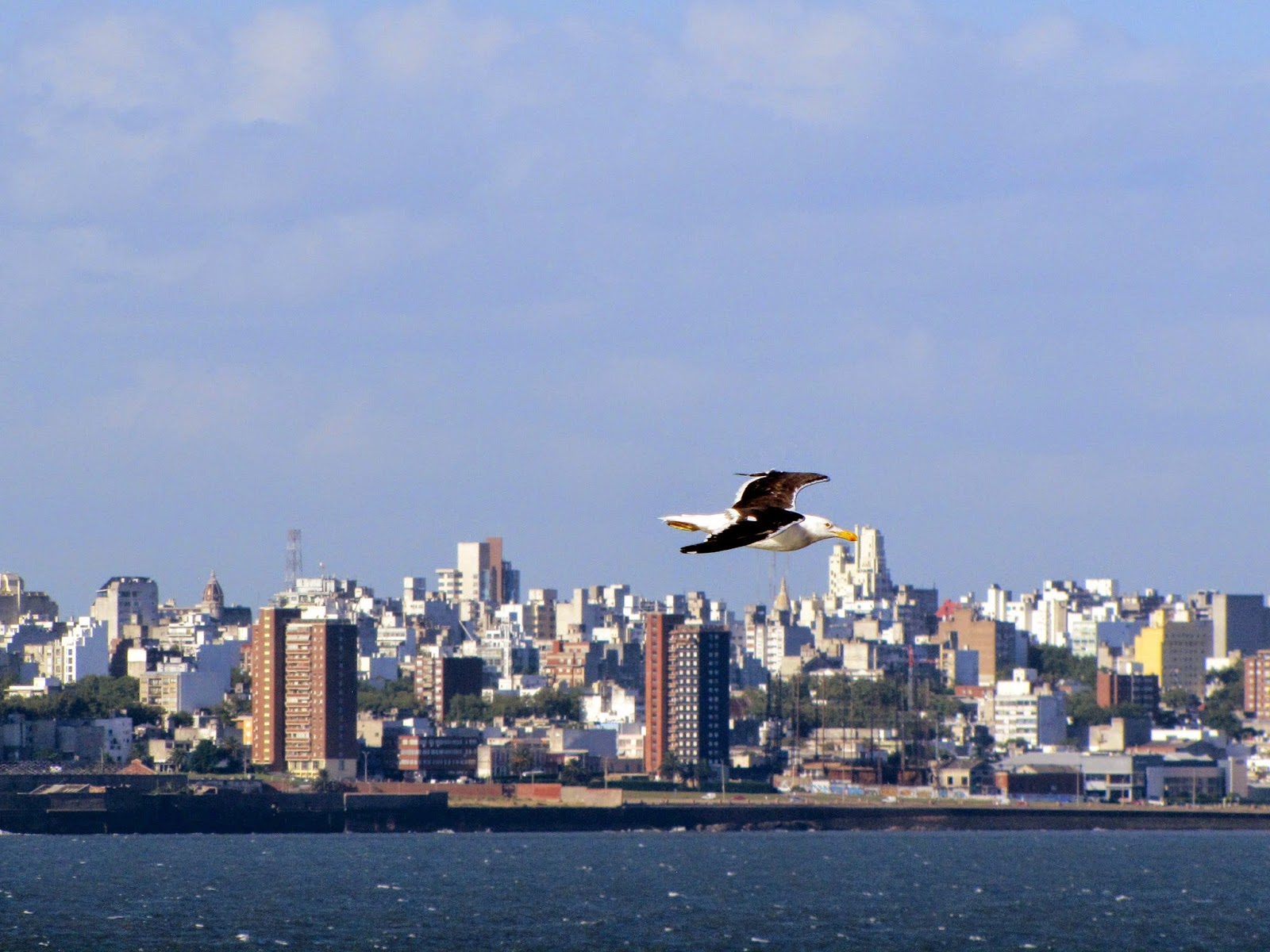 And soon the city of Montevideo was but a memory.  A good one!