Though many of us know of the Falkland Islands as a result of the war which took place in 1982...not too many people have actually been there.  In fact...most would have trouble finding them on a map!  Who knew they are actually 300 miles from the mainland of Argentina?  And since there are still hard feelings as a result of that war...one can't even get there by hopping a plane from Argentina. But since our cruise ship had a port of call in Stanley (the capital city)...we took the opportunity to see and learn what we could during our short stay. 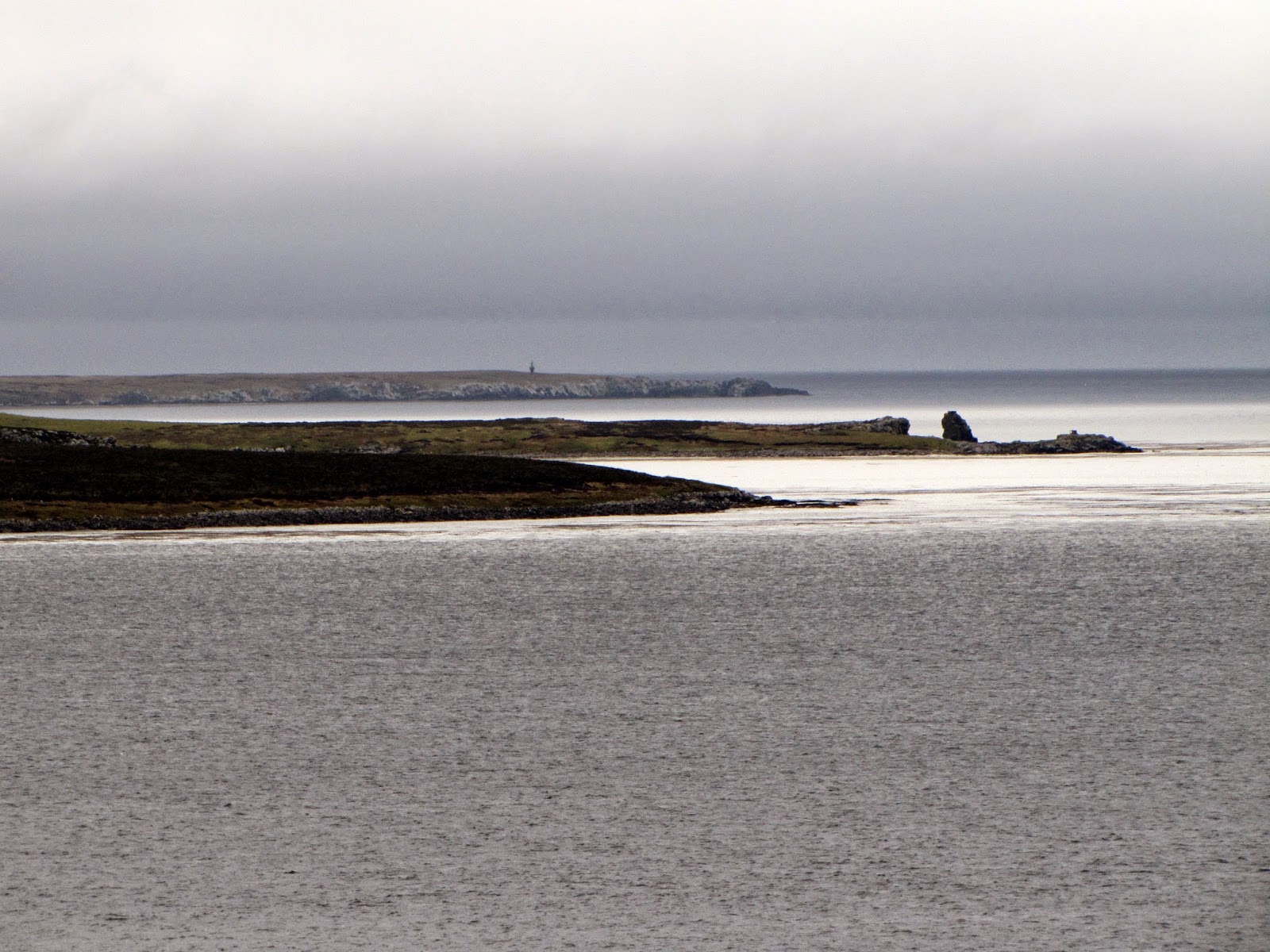 We were up early that morning...as our ship approached the islands.  Though I wasn't able to capture it on 'film'...one of the first views that came into sight was a colony of penguins marching along the craggy rocks onshore.  Never before I had I seen penguins ...running wild and free. 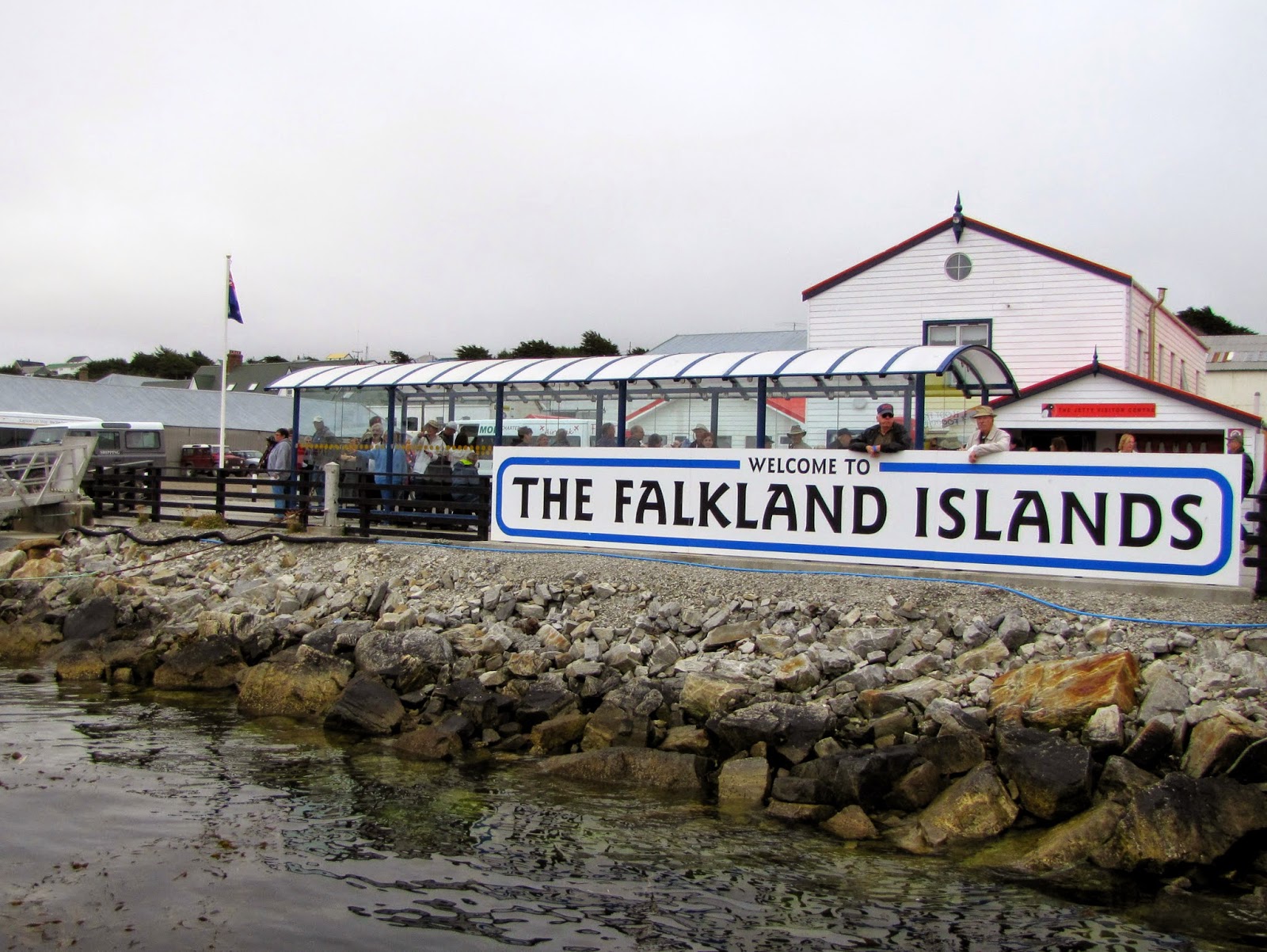 We ventured ashore in tender boats shortly after anchoring... 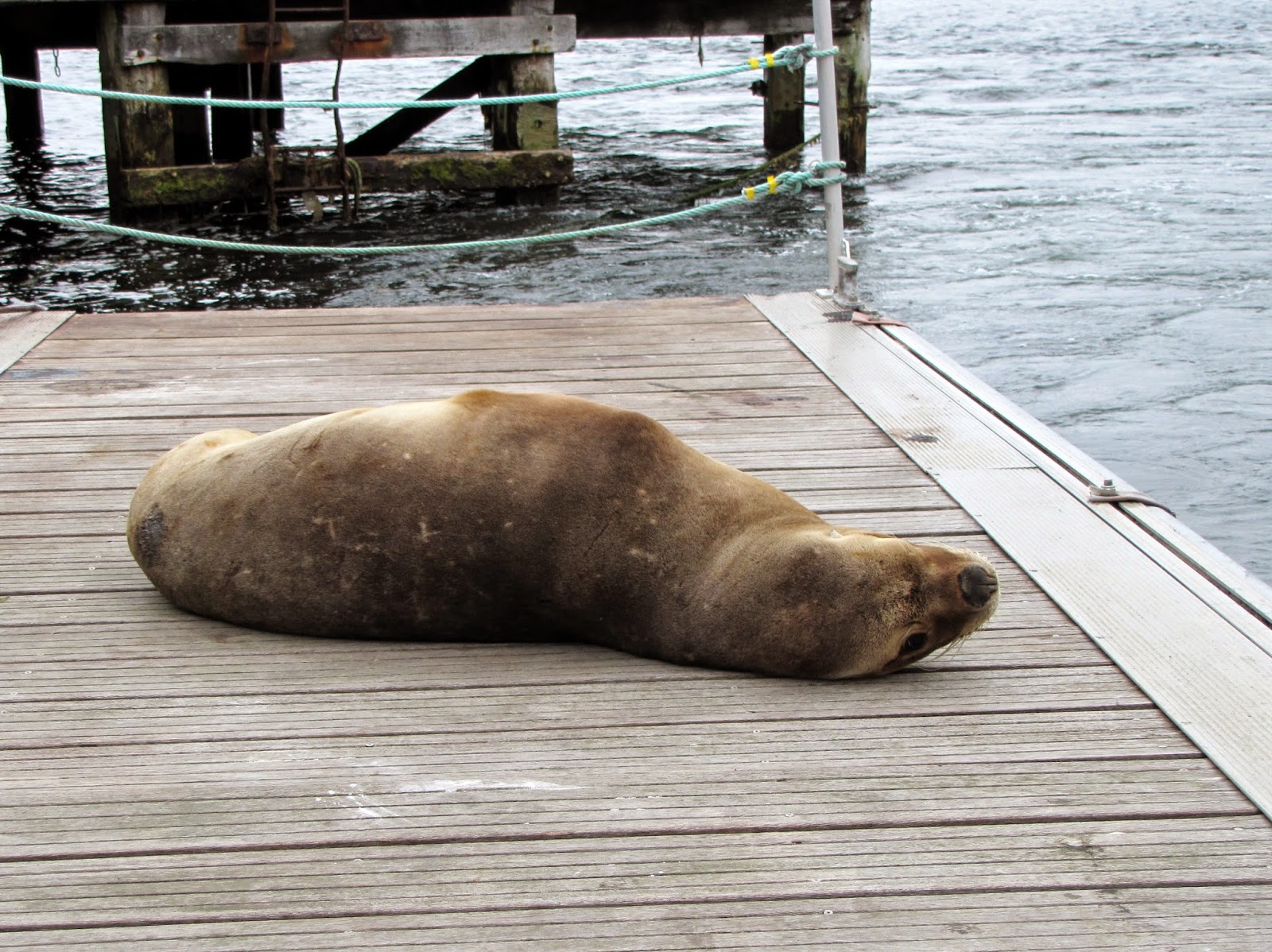 ...and were welcomed by this resident sea lion. 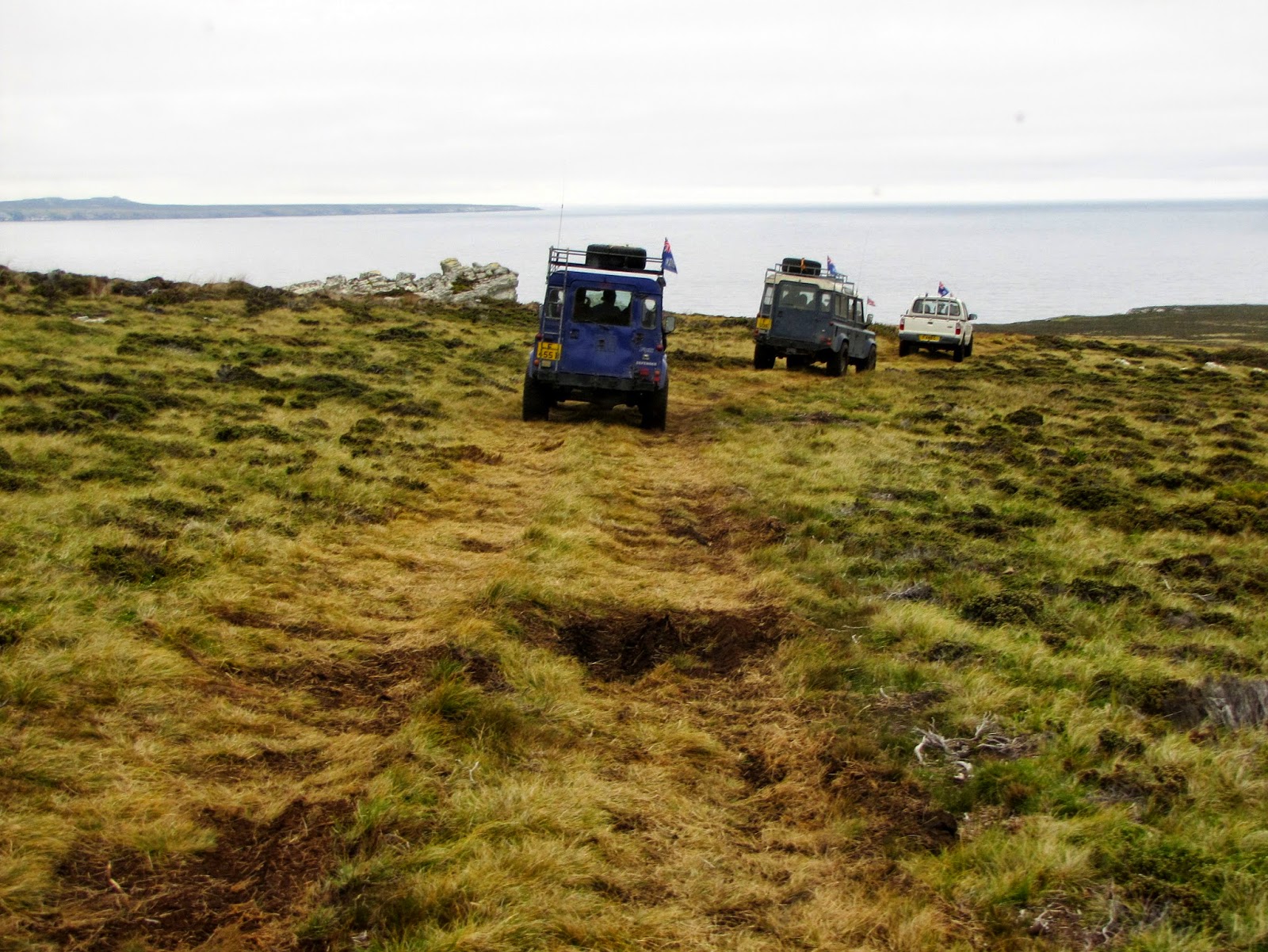 We had booked a tour that took us in 4x4's across the island. As you can see...there were no roads...so the four-wheel drive was the only way to go! 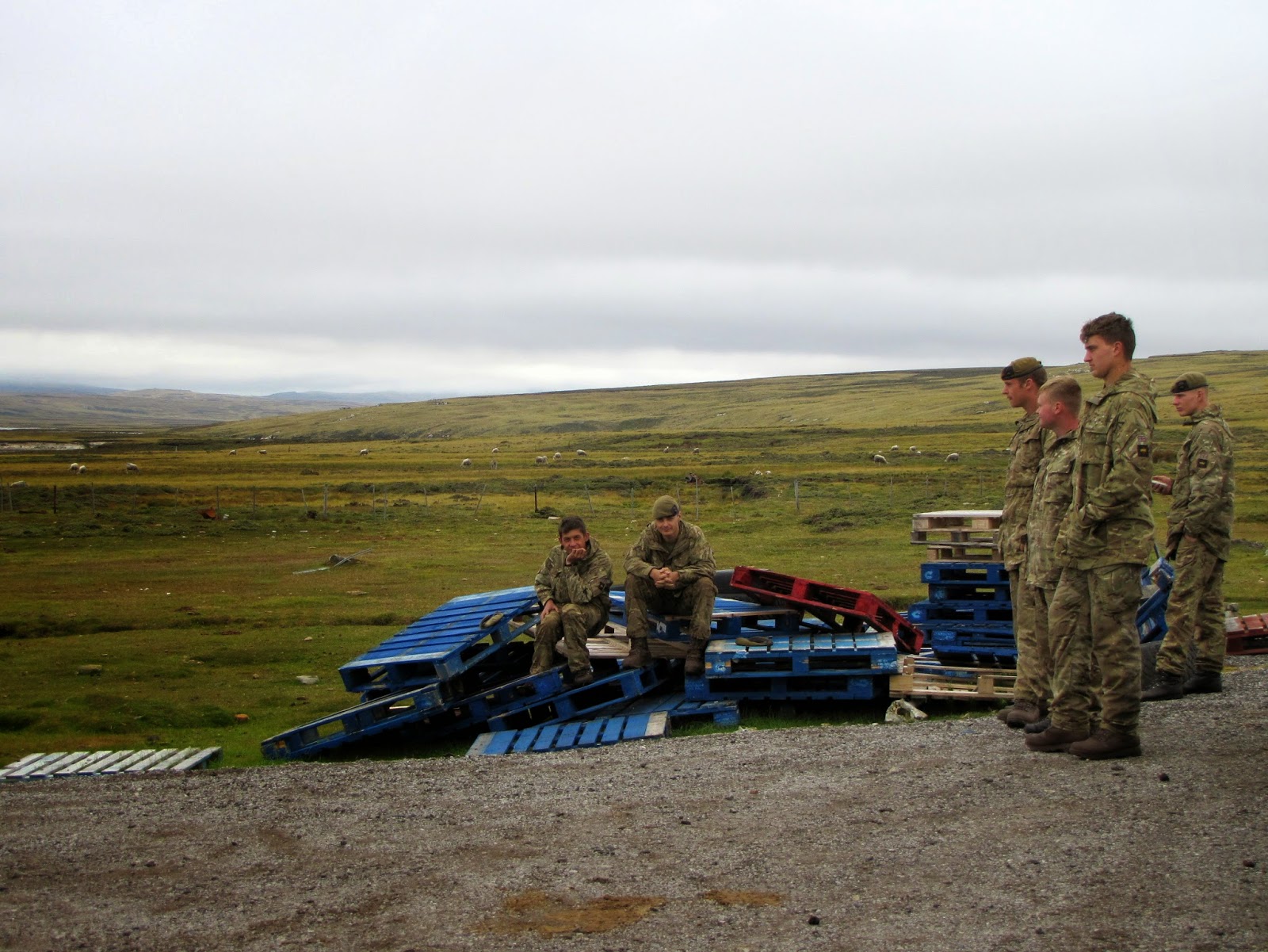 At one point...we met a group of British soldiers who were done their training exercises and waiting for a ride home. The islands rely heavily on the protection of the British military...who maintain a garrison in this area. 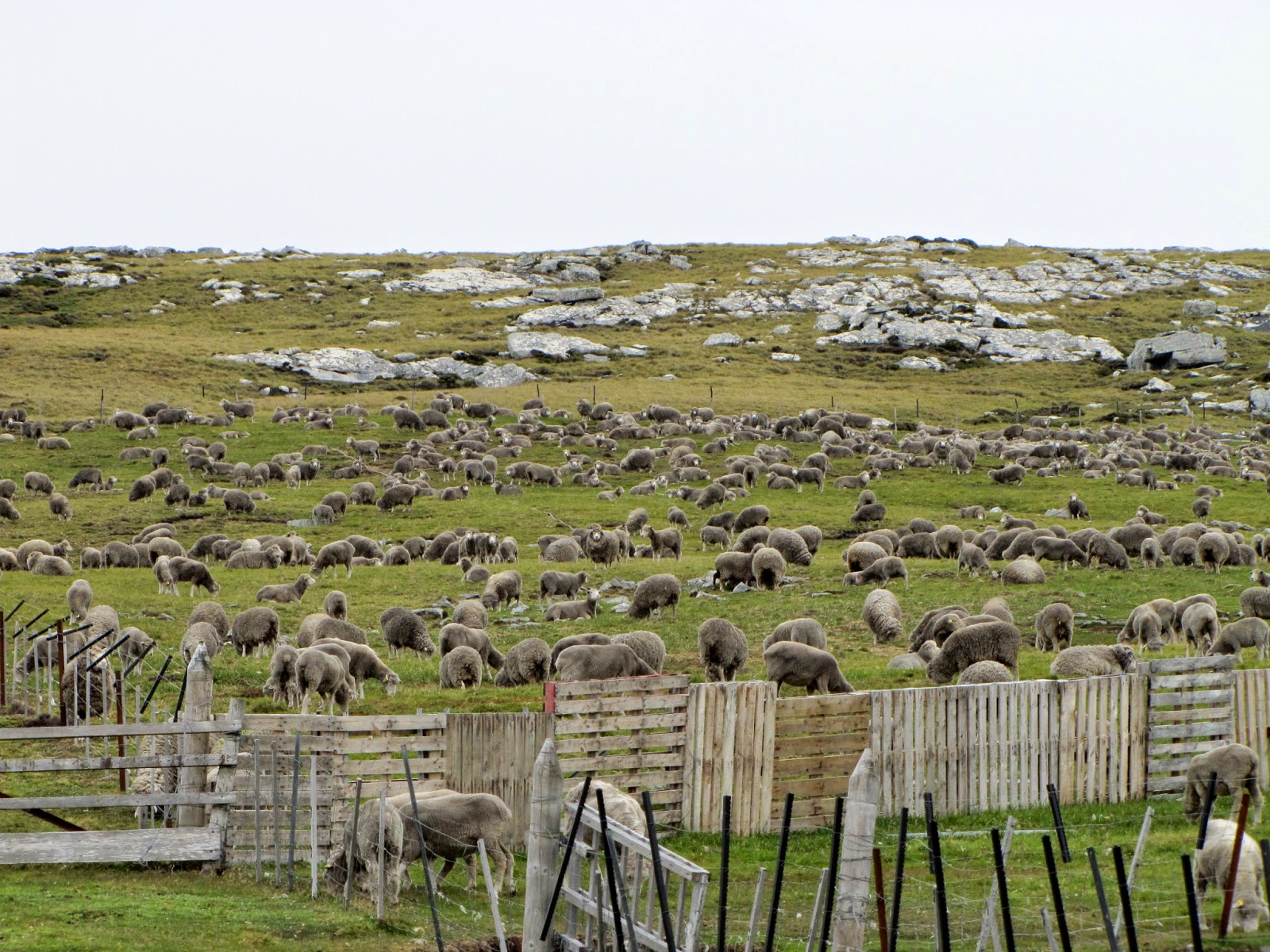 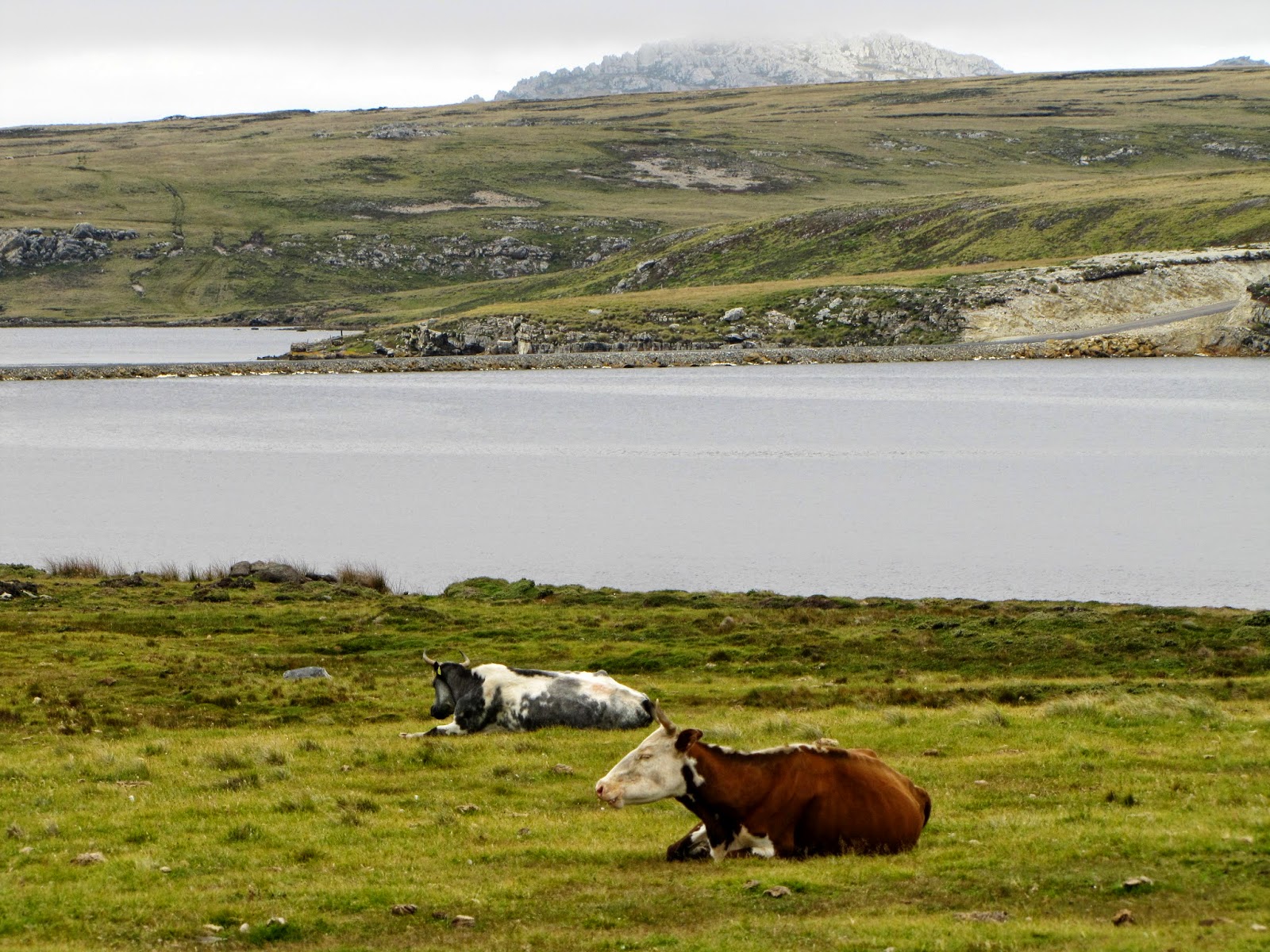 ...a few head of cattle, and sheep dogs.  Of course.  The owner was a friendly islander...who helps organize the tours across their farm.  She was also a storehouse of information. We learned that on their farm they have a windmill to generate their own power...and use peat as their source of energy for both heat and cooking.  This decayed plant material is dug from the bogs...dried in blocks and used as fuel in stoves and furnaces.   Life goes on in the Falklands as it always has...though they all carry cell phones these days.  And while she was hosting our tour that morning...the farmer's daughter gave birth to a baby boy nearby.  Yes...life goes on. 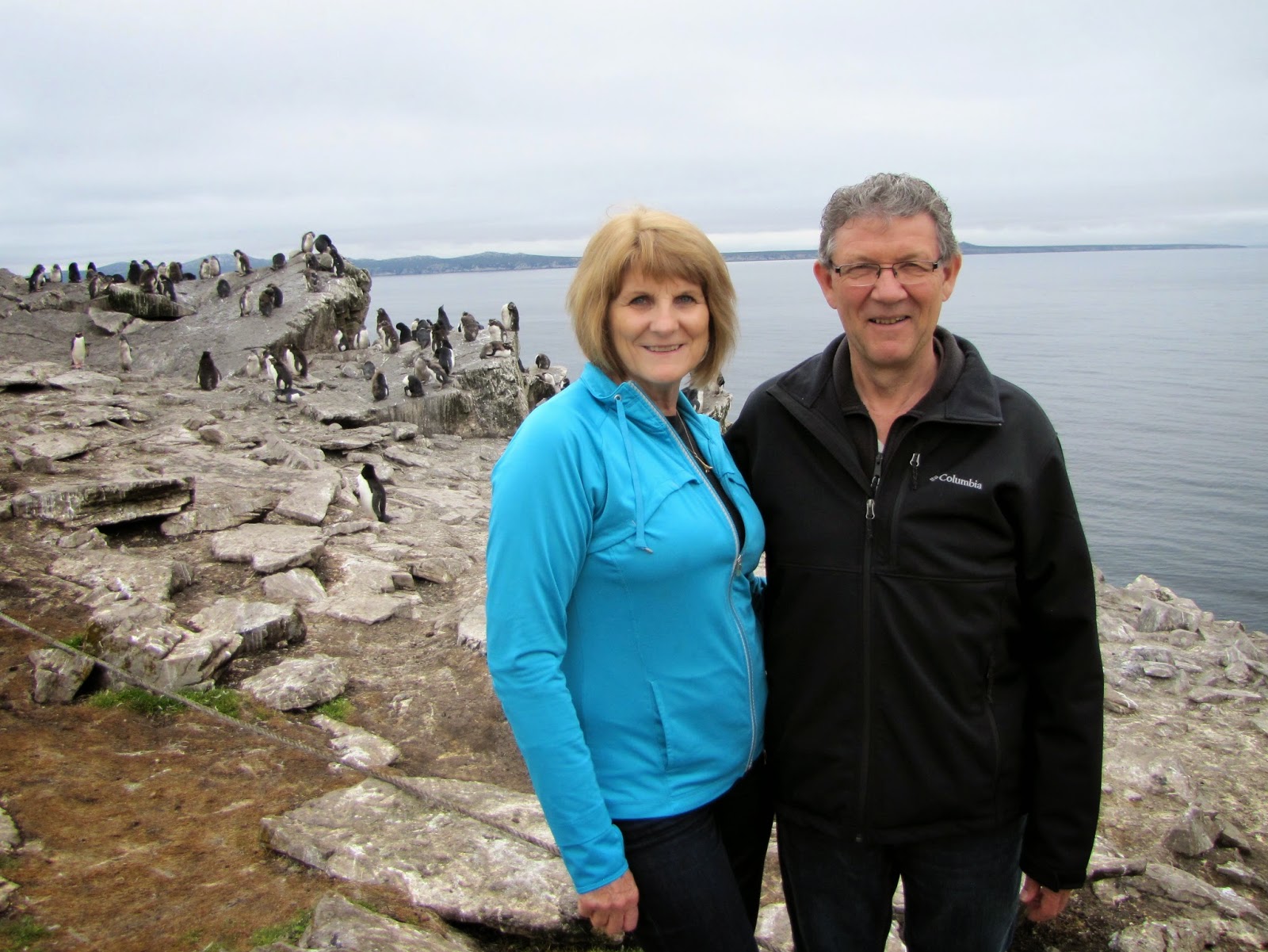 Our destination was a rocky cliff overlooking the sea that is home to one of the world's largest rockhopper penguin colonies.  Rockhopper penguins stand only 21 inches tall...and are the smallest and most agile of all penguins. 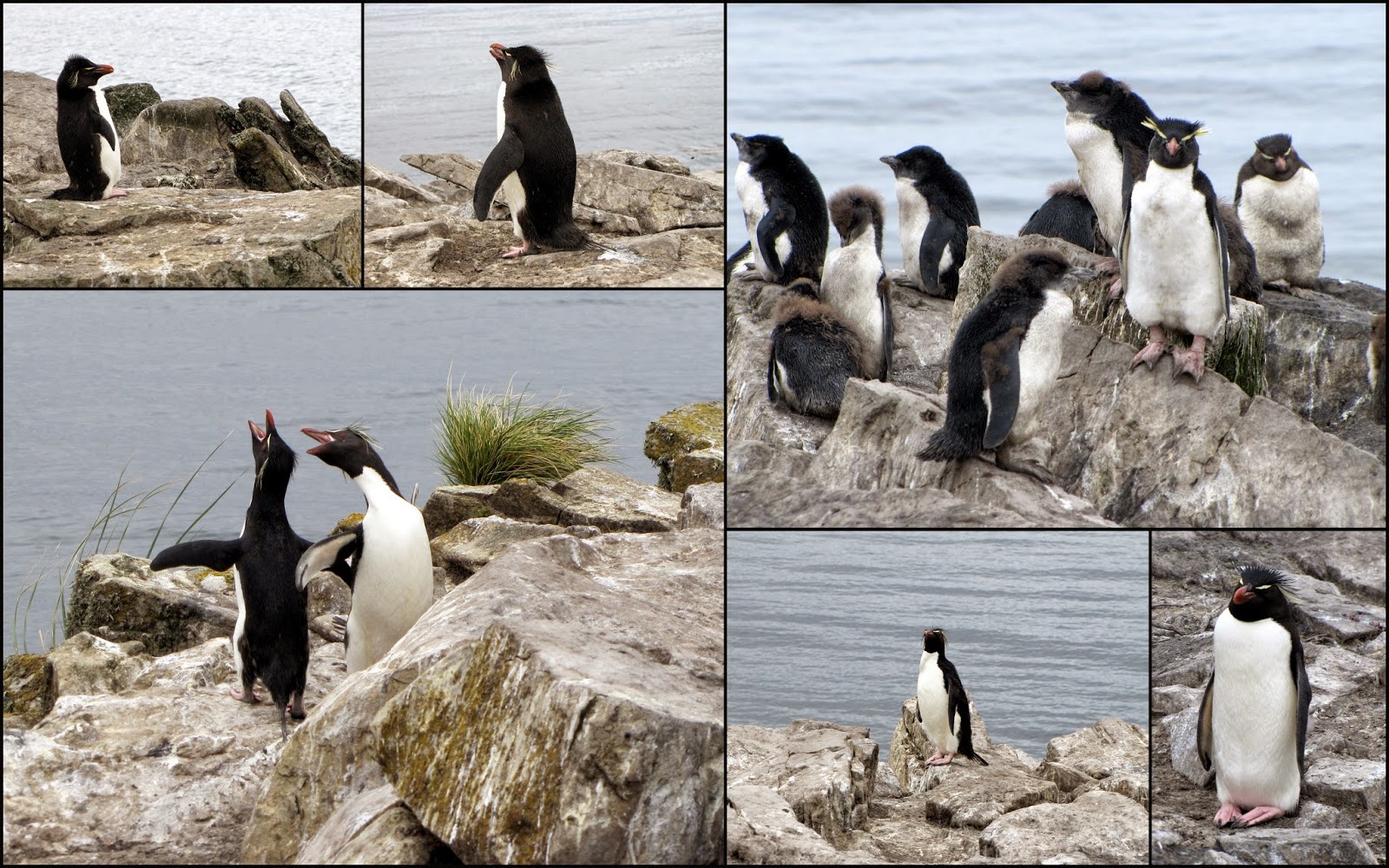 We spent an hour on the bluffs...observing the penguins who went about their business as usual. They hopped about on the rocks...siblings squabbled here and there...mothers fed their young...and we took photos. A nearby cabin offered good old-fashioned Falkland Island hospitality (including refreshments).  And that was our 'road less traveled' experience on East Falkland Island.  A good one! 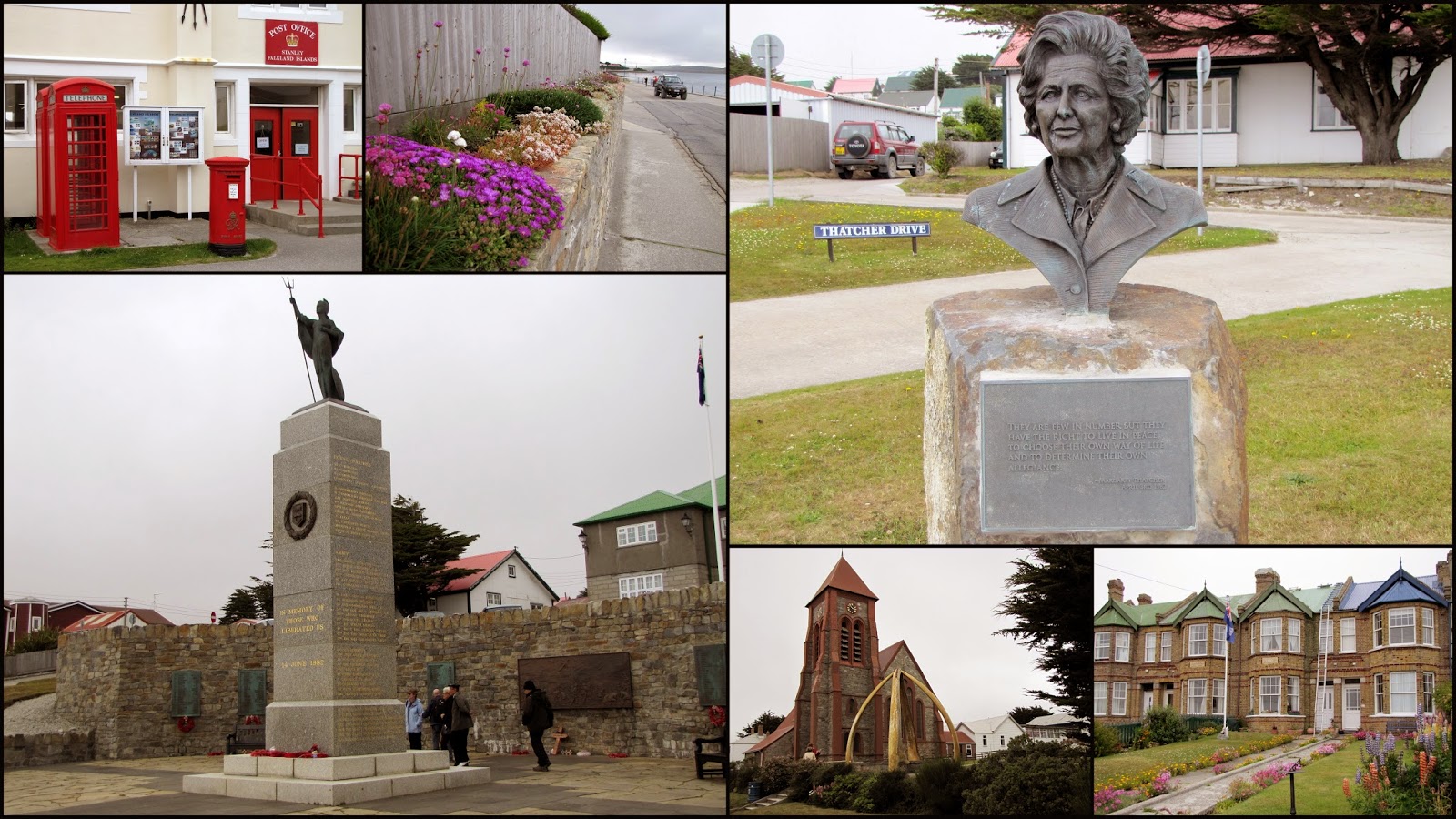 Arriving back in Stanley...we took a walking tour.   It felt rather like we were in Great Britain...with the English-style pubs and red phone booths.  We visited the Christ Church Cathedral...with it's renowned monument constructed of giant blue whale jawbones.

Margaret Thatcher is the hero to the Falkland Islanders...and on January 10, 2015 (officially known as Thatcher Day) they honoured her by unveiling a bronze statue of  Baroness Thatcher. It sits on Thatcher Drive...and has a plaque inscribed with her quote from 1982...'They are few in number, but they have the right to live in peace, to choose their own way of life and determine their own allegiance.'  It seems the Argentinians are not so fond of the statue.  From what we gathered...the old dispute has not been settled once and for all. 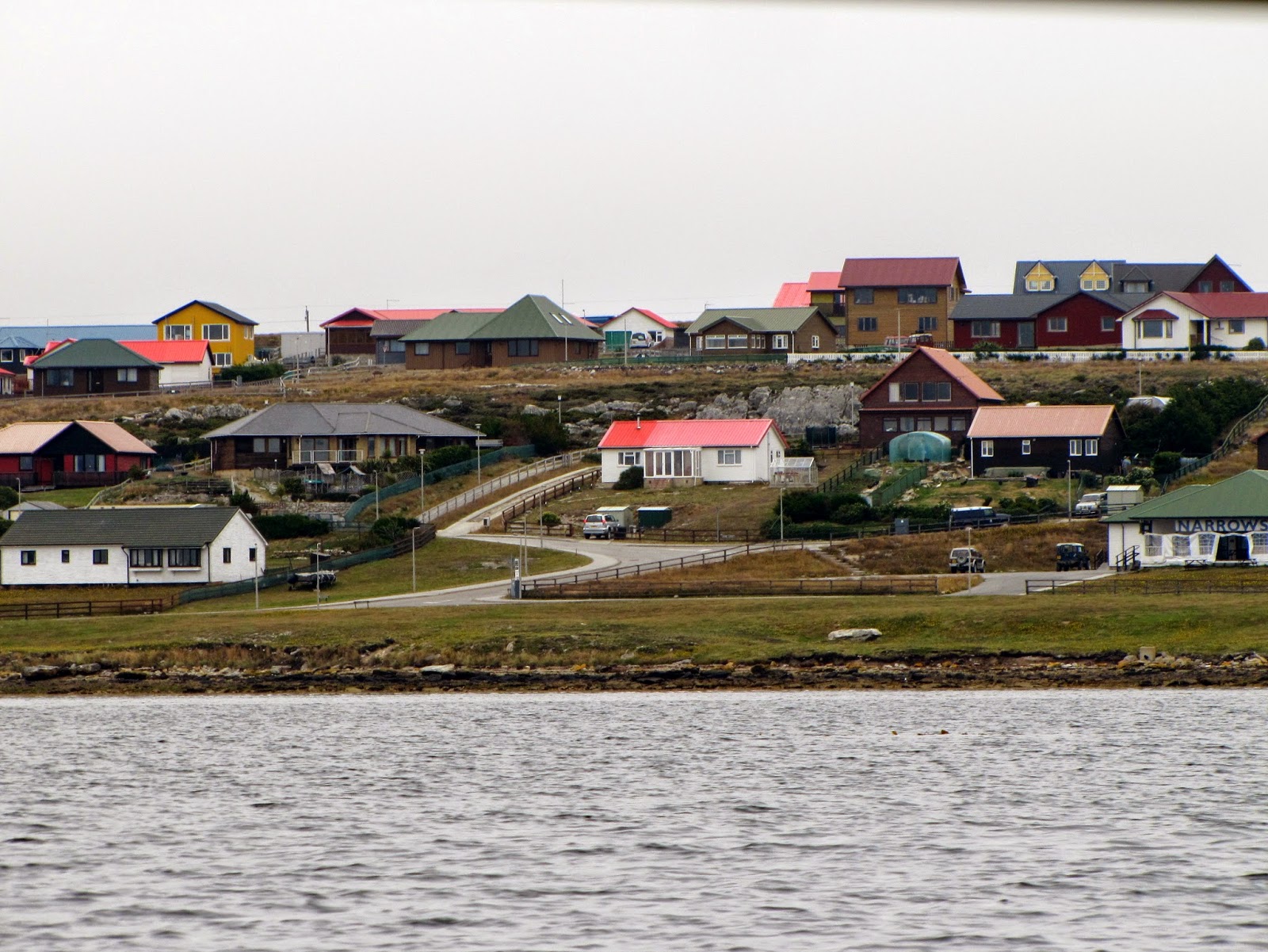 And so ends our tour of the Falkland Islands...which seem like a small slice of Great Britain situated in the far south Atlantic.  2,500 people live here...crime is almost non-existent...there is no light pollution...the shores teem with remarkable wildlife...and visitors are more than welcome!