beyond quebec city ~ a road trip along the st. lawrence river

Though we loved Quebec City...it was time to carry on with our planned road trip.  Our route took us along both sides of the St. Lawrence River east of the city... 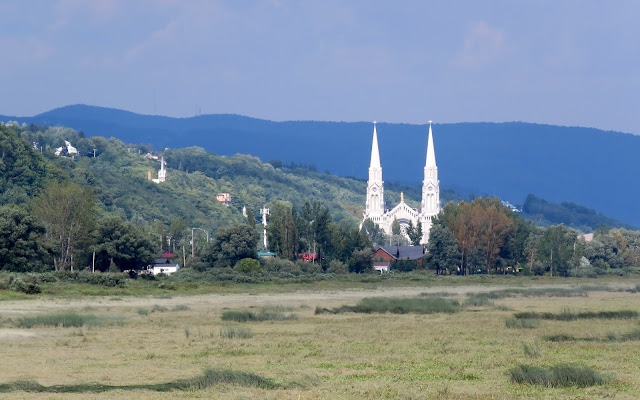 ...along winding country roads and through charming villages.  The spires of the church steeples could be seen for miles and at times we heard the church bells. 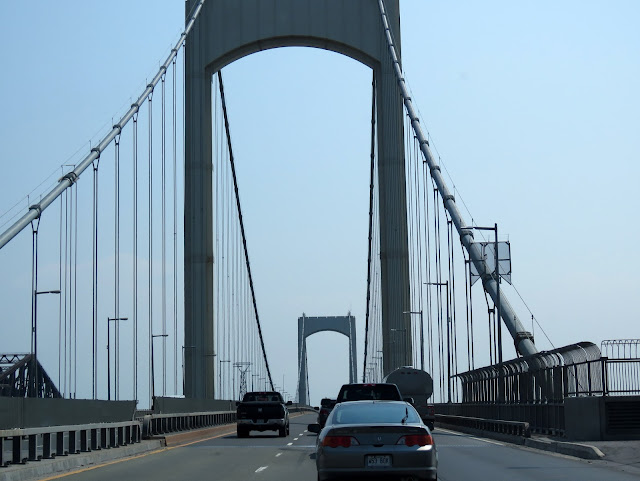 We left Quebec City...crossing to the south side of the river on the Pierre Laporte Bridge...the longest non-tolled suspension bridge in the world. 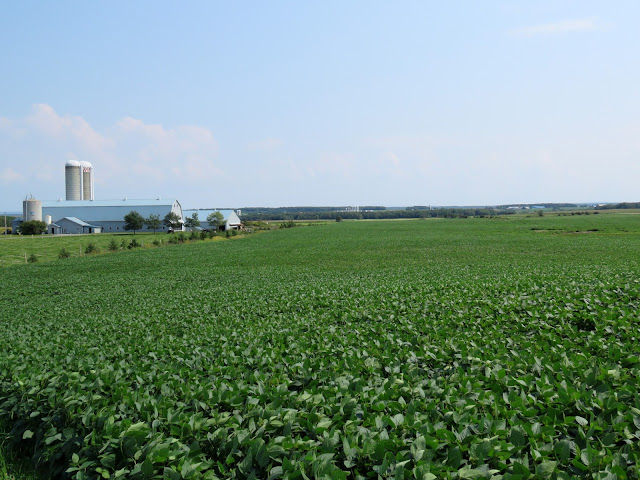 From there we traveled east on the panoramic Route 132... 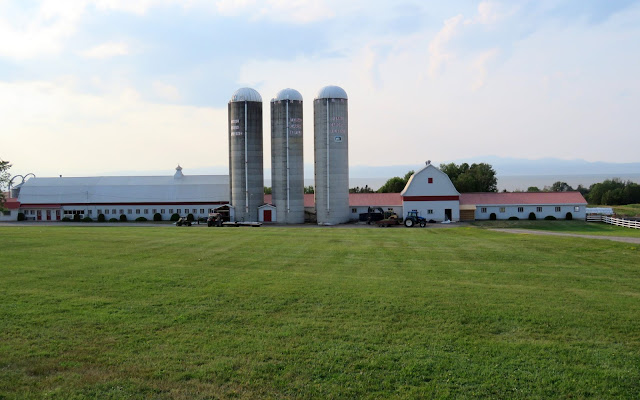 ...through beautiful farmlands that sat on the rivers edge. 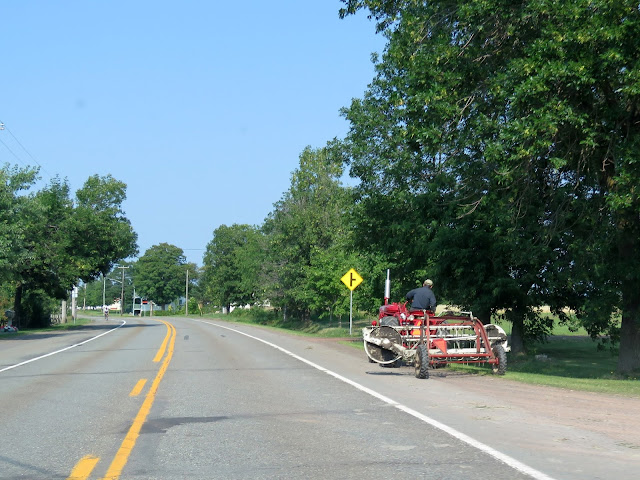 We shared the road with farm equipment and bicycles...and took our time soaking it all in. 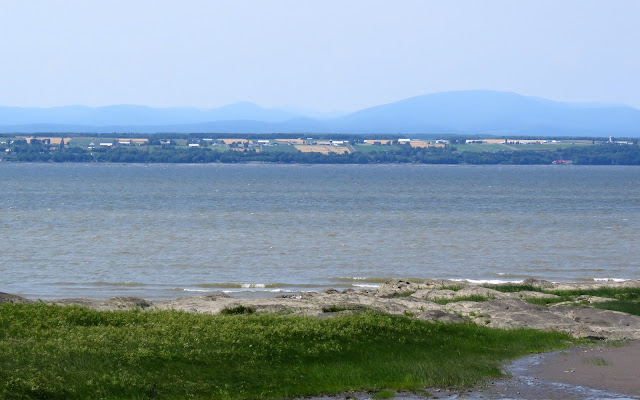 Across the river...more picturesque farms hugged the shore. 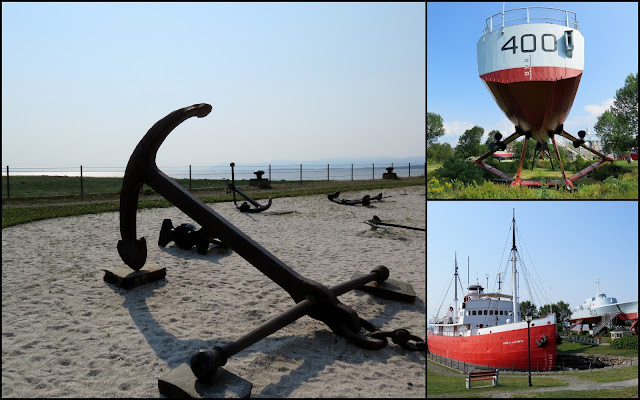 We stopped at L'Islet...the pretty little village I mentioned earlier that has a wonderful little bistro with great lobster rolls! It is also home to the amazing Maritime Museum of Quebec. The Ernest Lapointe ice-breaker was on display......as well as as the Royal Canadian Navy's experimental hydrofoil called the HMCS Bras d'Or.  Is it a plane...or is it a boat?  We spent the night at Riviere du Loup...a small seaside town known for its beautiful sunsets.

Our next port-of-call on the south shore of the river was Rimouski....where there is much to see and do. 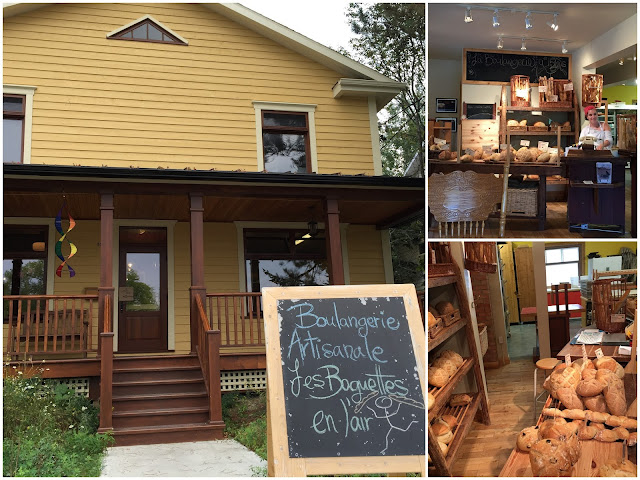 If you visit Rimouski...be sure to stop by Les Baguettes en l'air for a snack. What a great artisan bakery!  Though we could not pronounce the names of any of the delicious pastries we were after...pointing worked just fine! 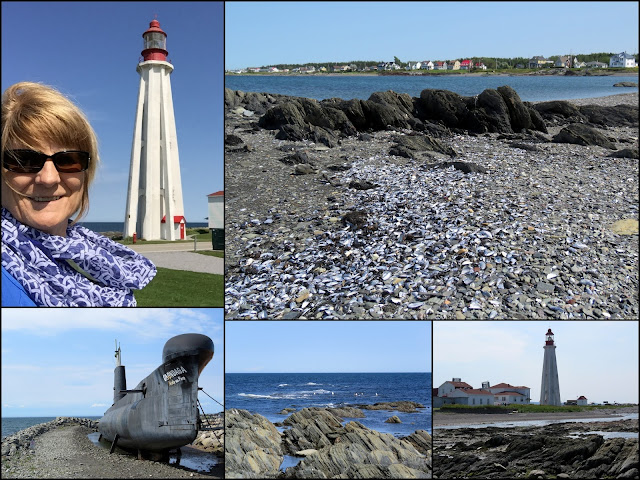 Rimouski is also home to Pointe au Pierre lighthouse...which played a vital role in the history of navigation on the St. Lawrence River. Built in 1909, this lighthouse is one of the tallest in Canada and one of the few to still have its prism. We took the guided tour...climbed the many steps to the top...and enjoyed the fantastic view.  Pointe au Pierre Maritime Historical Site is also home to the Onondaga...Canada’s first submarine open to the public. We took the tour...and learned how 70 men lived for months at a time in this 300 foot submarine. 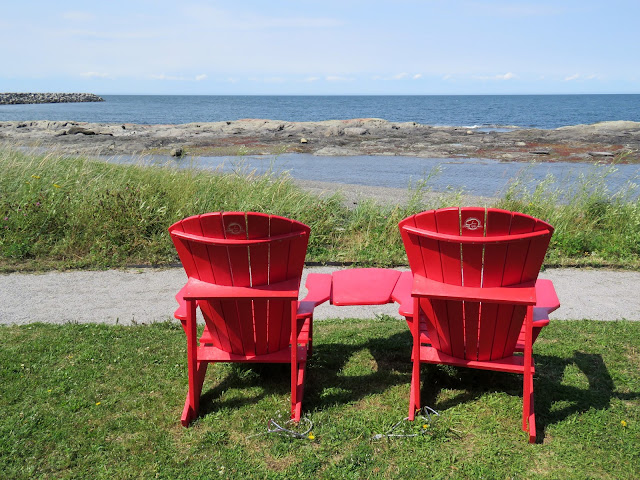 Here the St. Lawrence looks much more like an ocean than a river...with no shore to be seen on the other side! It was not too far from here that the CPR's Empress of Ireland sank on that fateful night of May 29, 1914...killing 1012 passengers on board (with only 465 surviving).  How is it that we hear so little of this maritime disaster...the worst in Canadian history...following so close on the heels of the Titanic?  We visited the pavilion dedicated to the Empress...heard the story...saw the memorial.  It is here that descendants of those who lost their lives come to pay their respects.

Another wonderful place to visit near Rimouski is Hell's Gate Canyon.  Now that sounded appealing to us since we have our own Hell's Gate on the Fraser Canyon in British Columbia. 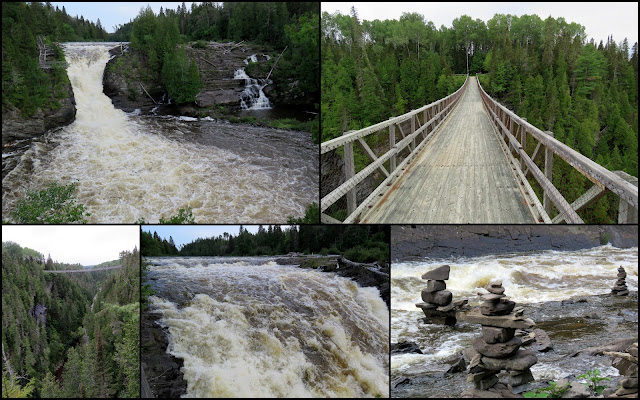 Located some 20 miles south of Rimouski, the canyon stretches about 3 miles between sheer cliff walls. We went towards the end of the day...and spent an hour or two hiking on the well-maintained trails. We rather liked being all alone in the park (met only one other couple the entire time)...and crossed the canyon on Quebec's highest suspension bridge...200 feet above the Grand Sault Falls.  We noticed that many visitors before us had left their calling cards...the all-Canadian inukshuk! 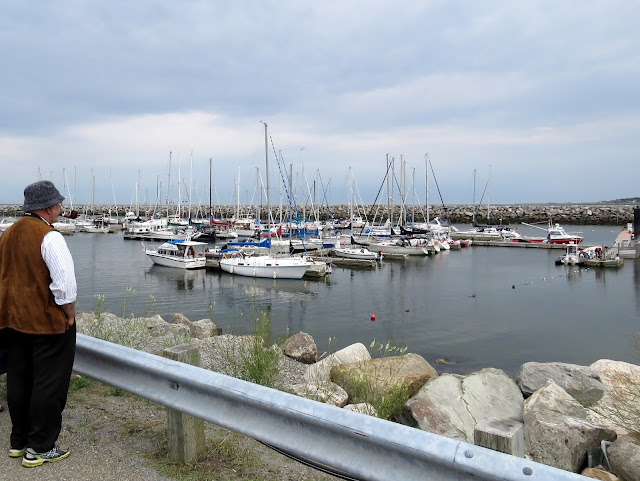 From Rimouski...we took a ferry across the St. Lawrence River to Forestville.  While we waited for the ferry to arrive...we chatted with this friendly gentleman (who we dubbed 'the old man and the sea')...an  American who spoke French but was happy to chat it up with us in English. Out in the country...it seemed there were many folks who could not speak English.  And our French being what is is...we had our moments.  As when we drove onto the ferry.  The attendant shouted something in French.  Hubby walked away from the parked car.  He shouted it again.  Hubby stopped and looked at him.  Finally he switched to broken English...'parking brake on!'  Oh!  It turned out that 'parking brake on' was very important!  The one hour ride across the river on Quebec's fastest ferry was not exactly 'smooth sailing'...and we were glad that the car was still parked where left it. 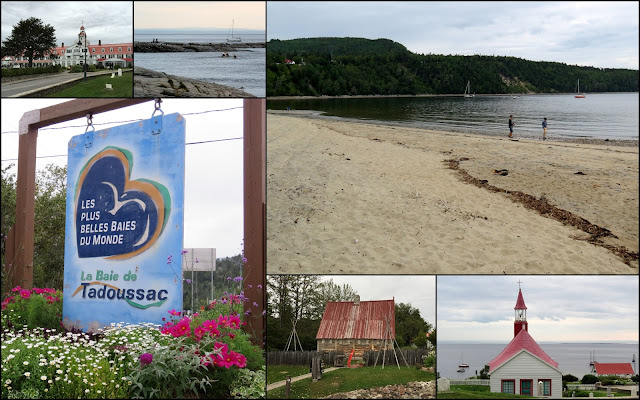 On the north shore...we drove west along the river to Tadoussac...home to the first trading post on Canadian soil, the oldest church in our country, the iconic Tadoussac Hotel and a wonderful beach that makes it a resort town.  It is also a whale watching destination...we spotted many belugas as we crossed the Saguenay River by ferry on our way out of town. 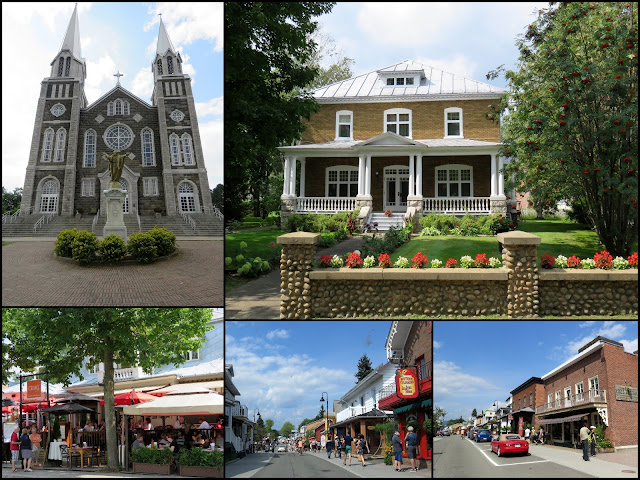 We lunched at Baie St. Paul...known for it's art galleries, shops and restaurants. Oh...and also where Cirque du Soliel began in the early 1980's. 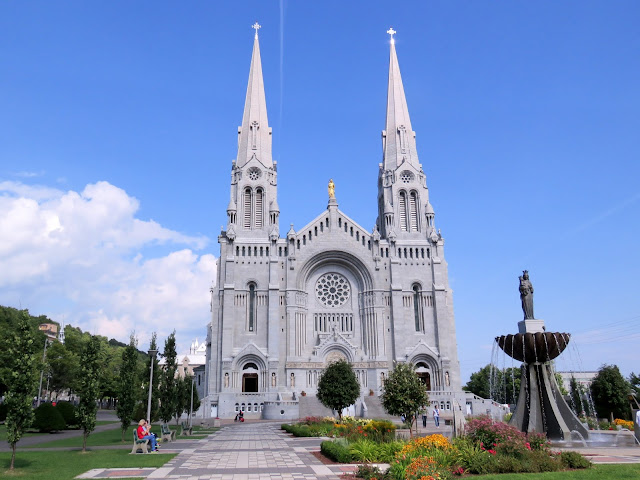 Then it was on to St. Anne De Beaupre...and it's famous basilica. It is a Roman Catholic sanctuary...known as a place where miracles take place and attracting many pilgrims from around the world.  Visitors who claim to have been healed have left their crutches behind and two large pillars inside the front doors of the church are totally covered with crutches. We enjoyed our visit...the ice-cream cones we had while touring the gardens... 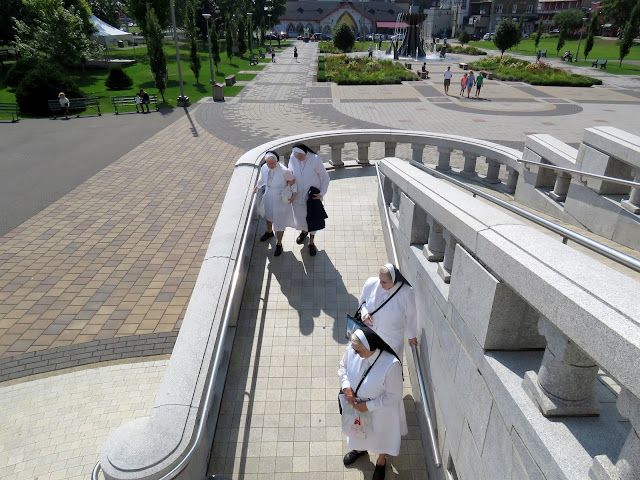 ...and people watching!  Aren't they cute? 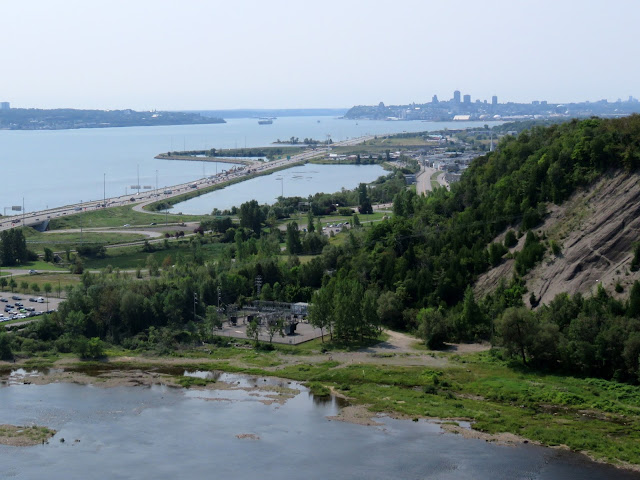 St. Anne Beaupre is just over a 30-minute drive from Quebec City.  And so our road trip along the St.' Lawrence River ended where it began...in Quebec City. 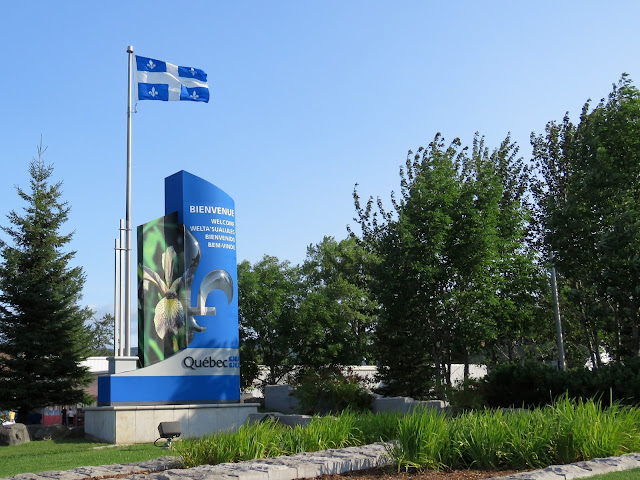 It was a most enriching experience.  Yes, it is a big country...but not TOO big!

What I never mentioned in today's post is that we actually took a week-long detour through New Brunswick and P.E.I. before we crossed crossed to the north shore of the St. Lawrence River.  I'll be 'unpacking' our adventures in those two provinces for you soon!