PEI...known for red beaches, potatoes, lobsters and Anne (with an 'e'). 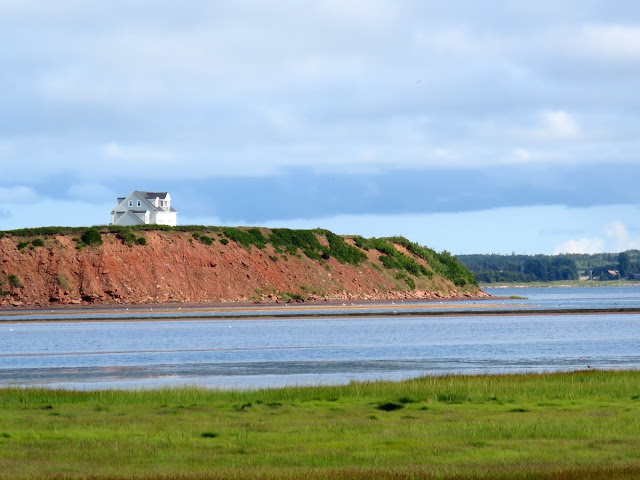 We have been working our way around North America over the years...in our quest to drive in every state and province.  Two years ago...when we arrived in Kansas...we could say that we had been to every state. But we still had two provinces to visit...New Brunswick and PEI. Prince Edward Island was the last on the list! We had heard so many good things about this place...Canada's smallest province....and we were not disappointed.  Thanks to the advice from our resident PEI travel agent (my blogging friend Kathie)...we stayed at the nicest places and made the most of our stay! 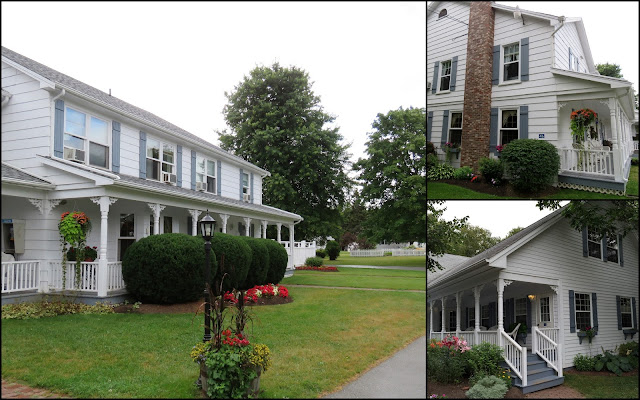 We spent the first few nights at Kindred Spirits Country Inn ...a lovely place in the Cavendish resort area...serving great breakfasts (and afternoon tea if you happen to be around at tea time). It is right next to the famed Anne of Green Gables House....and just a short walk to the spectacular beach. 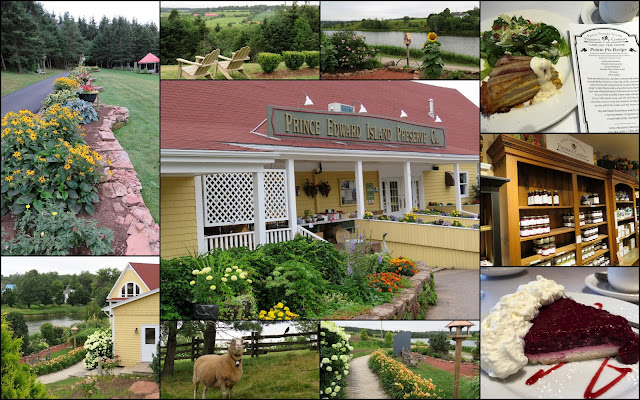 We were told we needed to check out PEI Preserve Company...and stroll through their beautiful gardens.  Oh...and to dine in their restauraunt.  And be sure to order PEI Potato Pie and Raspberry Cream Pie for dessert.  We did all of the above!

The Preserve Company is on the lovely River Clyde in New Glasgow, Prince Edward Island...a picturesque little village not far from Kindred Spirits. The building (built in 1913) was once a butter factory...now a specialty food production kitchen, restaurant and gift shop. The 12 acre gardens on the property were created for Islanders and visitors alike to enjoy the natural beauty of Prince Edward Island.

We enjoyed our dinner with a view...and the server even brought us a printed recipe for the PEI potato pie. 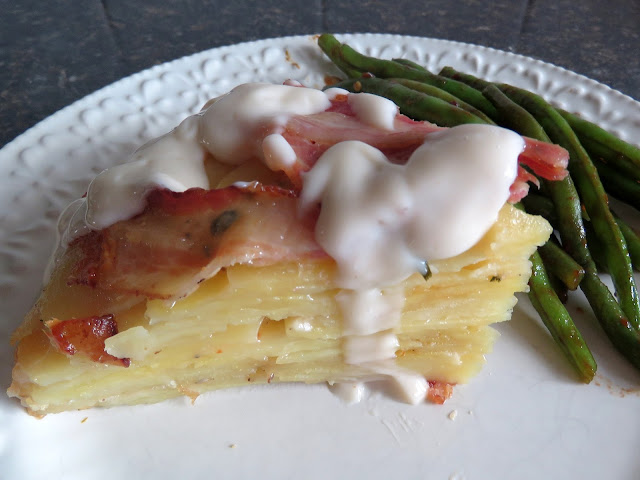 Just for the fun of it...I made it last week with British Columbia potatoes and Fraser Valley bacon. :)  It was just as good...but isn't it always nice to have someone else prepare and serve your meal?  And for the record...next time I prepare it...I will invite six friends to share it with.  It's not meant to be a recipe for two! 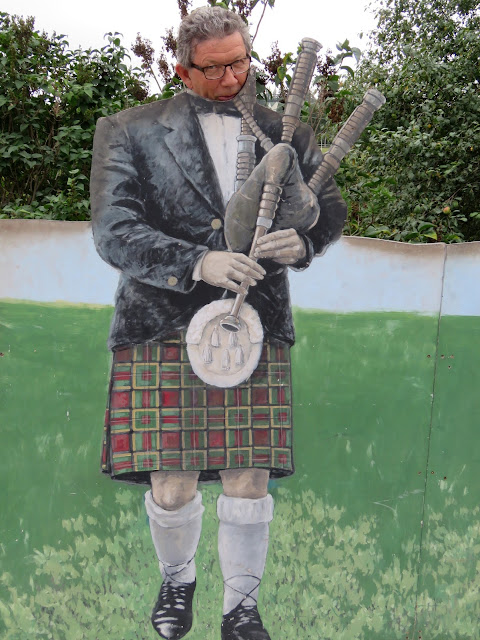 At the Preserve Company...they let anyone have a go at the bagpipes. :)  He looked almost princely in a kilt...and played bagpipes like a pro. 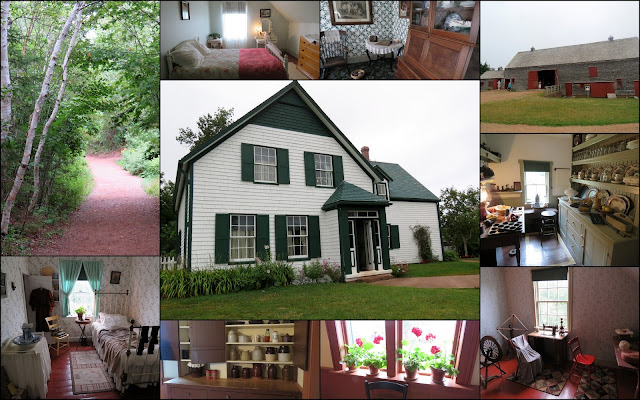 Since we were right next door...of course we visited  Green Gables...a Canadian historic site and part of Prince Edward Island National Park.

Author Lucy Maud Montgomery created the story of  Anne with this house (belonging to relatives) as her inspiration for the setting. The room above the porch was Anne's room.  How fun to tour Anne's house...stroll through the woods...and down lover's lane...and be reminded of all things Anne!

The book has sold more than 50 million copies and has been translated into at least 20 languages...and anchors the island’s multi-million dollar tourist industry today. We could not believe all the tour buses in the parking lot...and tourists from around the world. 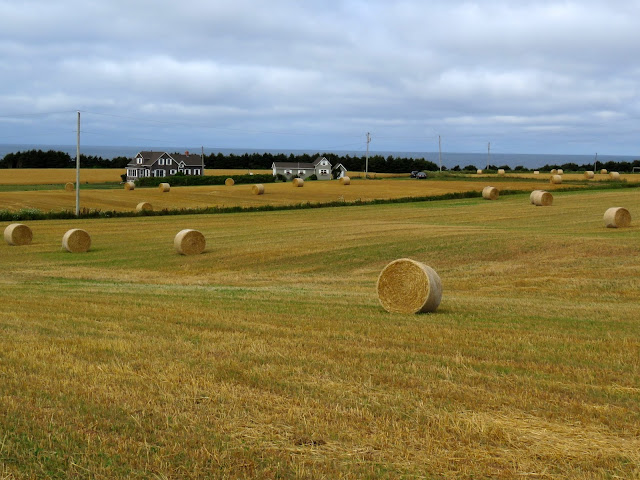 We so enjoyed our time on the north coast...where farmland meets seashore! 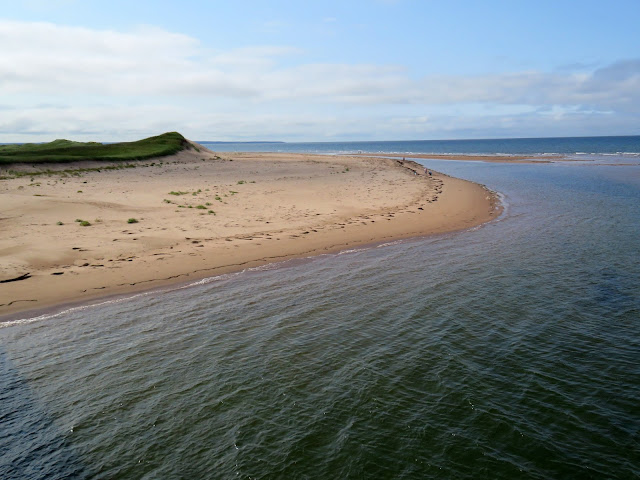 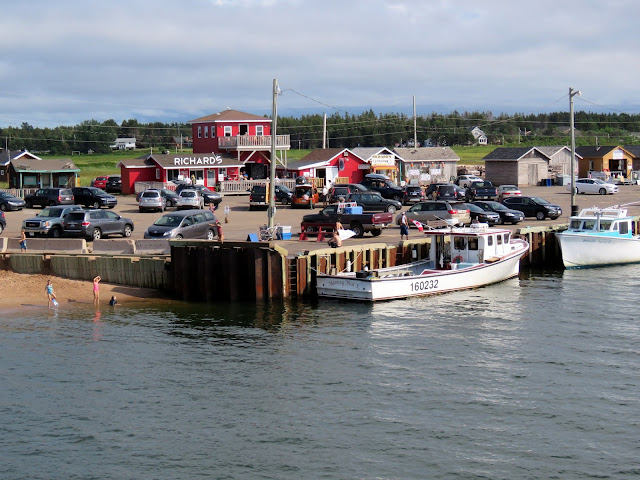 ...and fresh lobster rolls  at Richard's at Covehead. 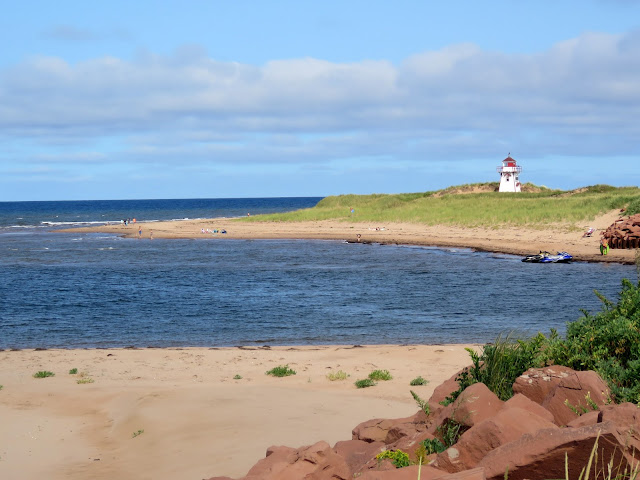 PEI has lighhouses galore...this one at Covehead overlooking the Gulf  of St. Lawrence. 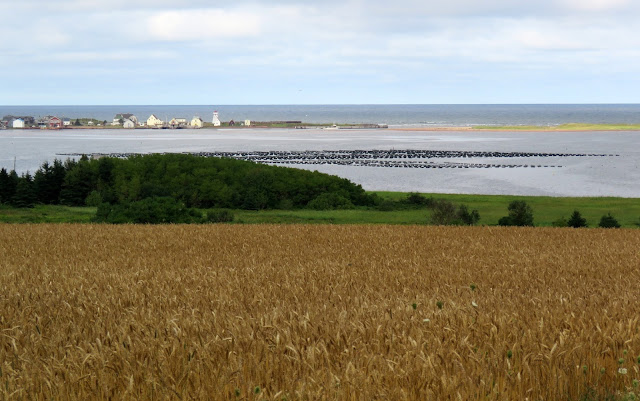 We had a most delightful evening in this area...at a Ceilidh at the community center in Brackley Beach. Some of PEI's top musicians performed lively Maritime songs along with fantastic fiddling and step-dancing. 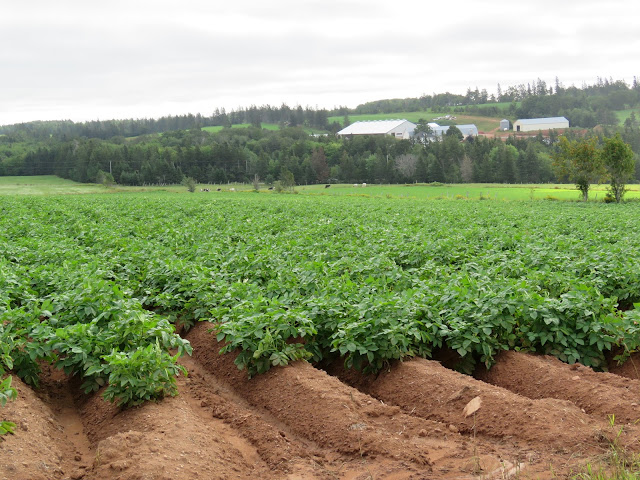 We took a drive west...to O'Leary, the potato capital of PEI and home to the Canadian Potato Museum. 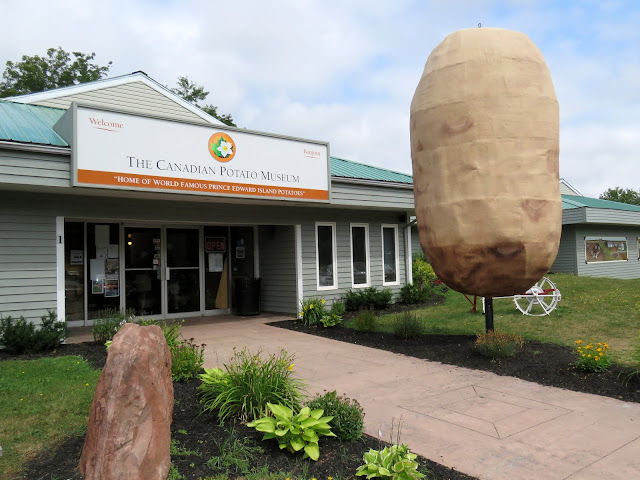 We are not always too enthusiastic about visiting museums...but this was one hubby wanted to see.  It's a quaint little museum explaining the historical roots of the humble tuber (self-guided tour)...along with a great collection of farm equipment used in the potato business over the years.  The little restaurant onsite features all things potato. 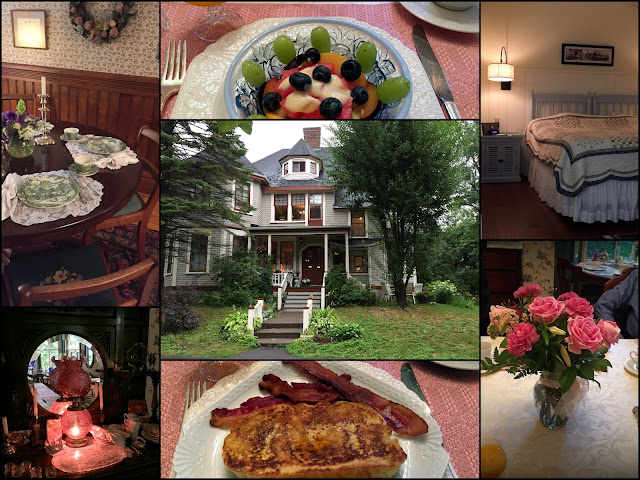 Our home for our stay in Charlottetown was Elmwood Heritage Inn...a wonderful place in the heart of the city.  The hosts Jay and Carol MacDonald went above and beyond to look after the guests! 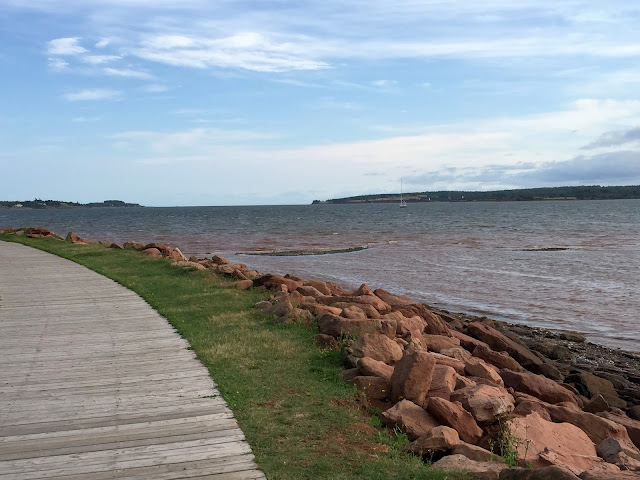 From there it was just a short walk to the waterfront....and to the downtown core. 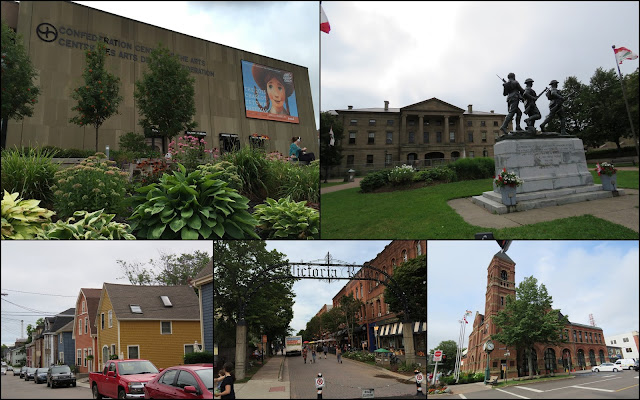 On the last day of our visit...we took in a matinee performance of Anne 'the musical' at the Confederation Building. It was fabulous...and packed out!  We enjoyed strolling the downtown area and had dinner on Victoria Row...a cobblestone street lined with historic buildings and closed to vehicles during the summer months.  How nice to eat outside on a hot summer evening and listen to a live music!  We were sorry that we would be leaving this lovely province in the morning. 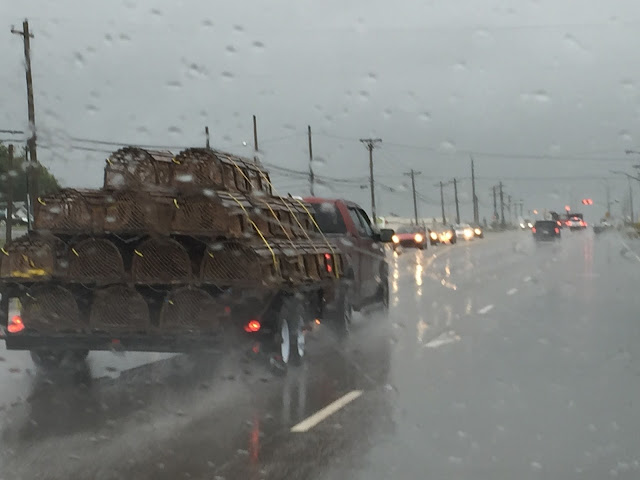 But 'all good things must come to an end'...so they say.  Overnight the sunshine turned to rain. That somehow made it easier to say good-bye!

If PEI was not so far from BC...I'd visit more often!