tales from the trail ~ an east coast adventure...

We are back...from a splendid time on the other side of our country. 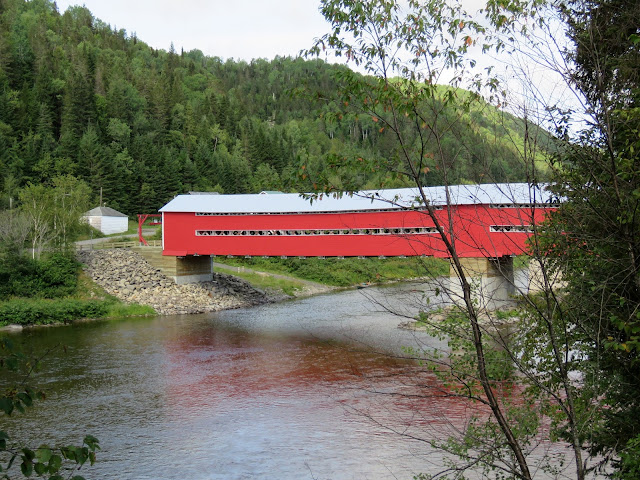 I'm left with great memories of covered bridges, lobster rolls, high tides, tall churches steeples and the friendly people we met along the way.  Our mission was to visit the Canadian provinces we had not yet been to.  We flew to Quebec City...where we rented a car and spent two weeks exploring the towns and countryside of Quebec, New Brunswick and PEI.

We are back home with a greater appreciation of this vast and beautiful a country we live in!  We may not always have understood the words...but the smile is a universal language!

Today I'll just share a few 'bits and pieces' from along the way, and introduce you to a few of the fine folks we met.

We spent the first few days in the Old Town of Quebec City... 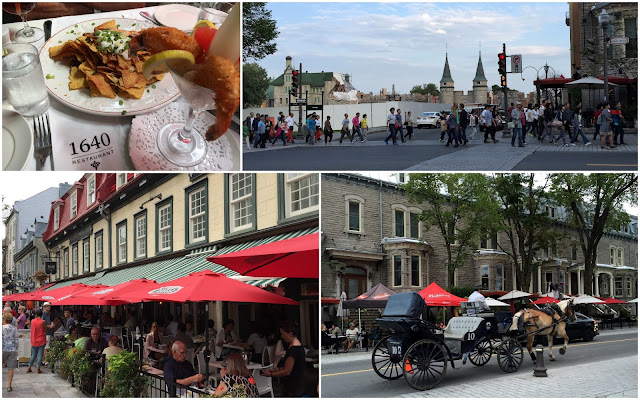 ...taking a tour and enjoying all the sights.  We so enjoyed eating on the patio restaurants of Grand Allee and watching the people strolling by.  It seemed we were in a faraway and exotic place! 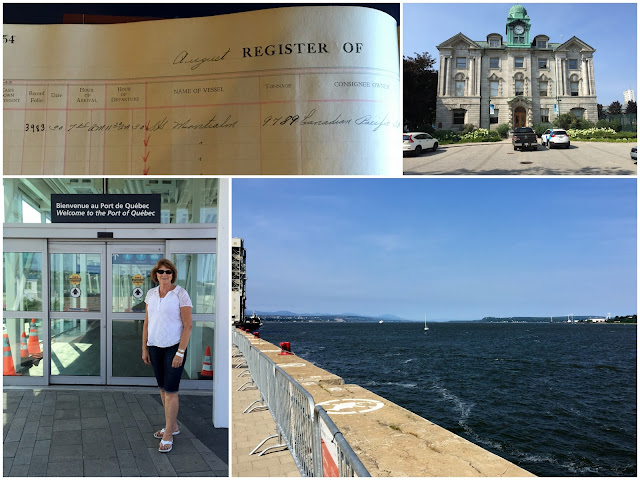 One of the highlights for me was visiting the old port of Quebec. On August 30, 1930 my mother arrived in Canada with her family on the Canadian Pacific Line ship called the Montcalm at the age of four. We visited the customs and excise building for information on where exactly her ship would have docked at that time.  The friendly lady that we chatted with brought out a big book from the archives with the handwritten entry for the S.S. Montcalm along with a listing of all the cargo on board for August 30, 1930.  Who would have thought that 85 years later (to the day) I would be at the docks in Quebec City where my mother first stepped onto Canadian soil? And the amazing thing is that I knew nothing about this when we planned this trip.  It was meant to be!

I should tell you that I had a lot of help in planning the itinerary for this road trip.  Who better to take advice from than some of my blogging friends? Rosella (who blogs at Rhubarb and Roses and lives in Ontario) was recently on a road trip through Quebec and New Brunswick and I took notes.  She said that L' Islet was a pretty little village on the south shores of the St. Lawrence River and had a wonderful bistro with great lobster rolls.  So we went...we saw... 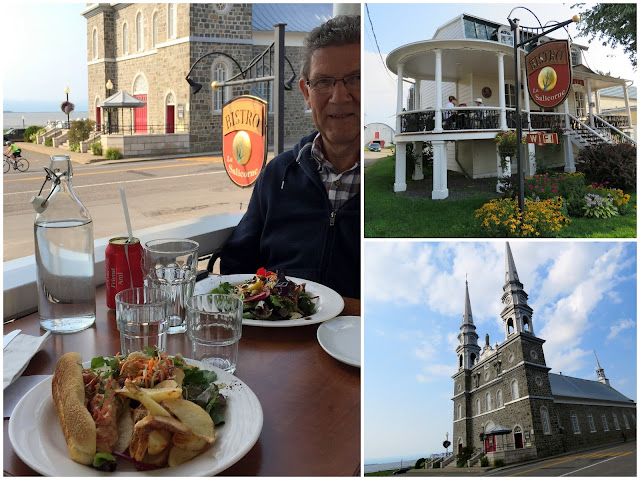 ...and we tasted!  Never mind that it was actually far too early for dinner...we shared the lobster roll! It was a great little bistro...across from an old church and with a great ocean river view! (Who knows where the St. Lawrence river ends and the Gulf of St. Lawrence begins?) And here's the thing...it was on the yard of a dairy farm.  Of course hubby went to check that out...and watched the hoof trimmer hard at work. Never mind that only French was spoken there...farming is a universal language!

Then there was Pam (who blogs at Playing With My Camera)...who lives near Fredericton and gave us lots of tips on seeing her part of the country. 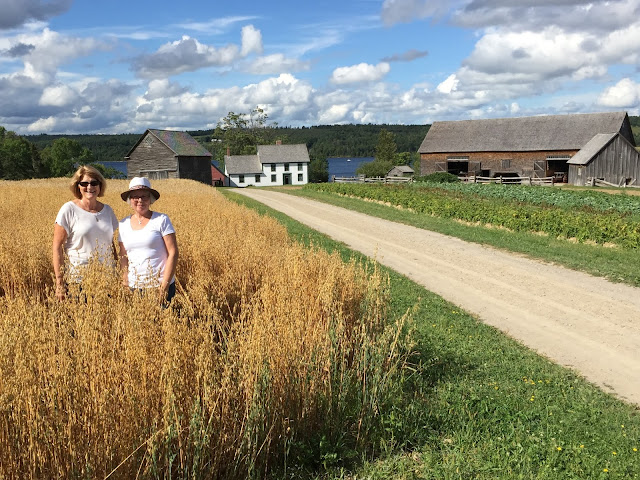 She took a day off while we were there and joined us at King's Landing Historical Settlement... on a warm and muggy day.  We had a delightful time together...and  later met up with Pam and her hubby for dinner at a lovely spot on a golf course in her neighbourhood.  Thanks, Pam!  Pam has family in Chilliwack...so I'm thinking we might just meet up over here next time. 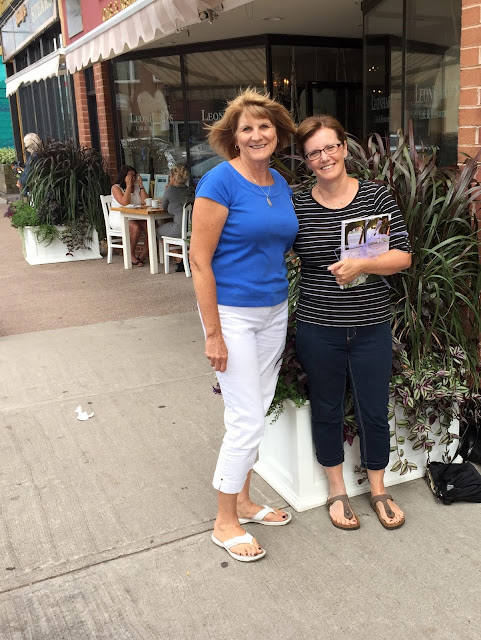 Our resident travel agent in PEI was my blogging friend, Kathie...who lives not far from Charlottetown and blogs at A Sparrow's Home.   She supplied us with names of places to stay, things to do and where to eat.  We took her advice...all good! Though she was entertaining a houseful of guests while we were in PEI...she took time out to come join us for coffee one morning.  How nice to meet up face-to-face!  I'm encouraging her to come out to the west coast one day...and we will carry on where we left off.

Our rental car turned out to be a Kia Soul. 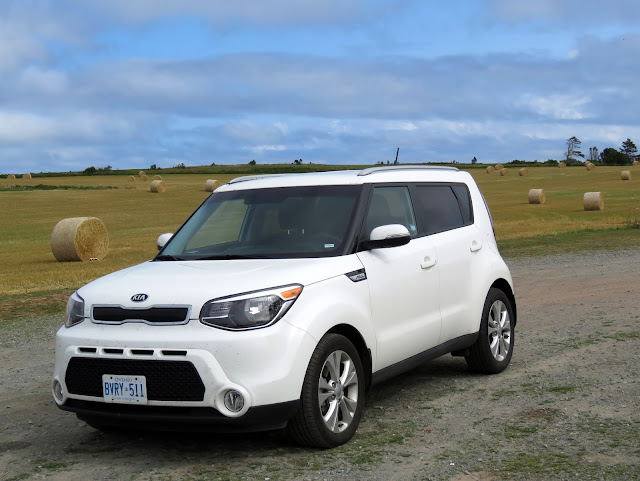 White, of course.  It seemed everyone else thought driving a white vehicle was a good idea as well... 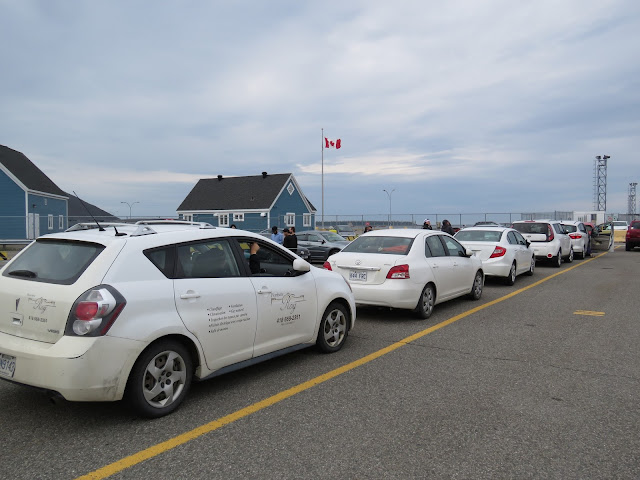 ...judging by the cars in this ferry line-up! 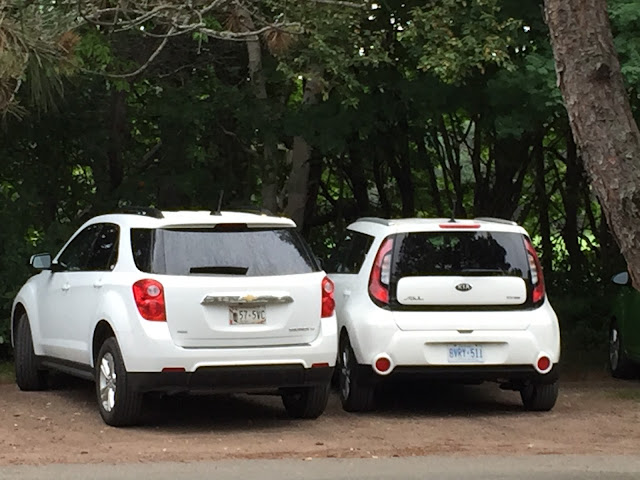 Let me share 'our smile for the day' during our stay in PEI.  We had our breakfast out on the deck of our B & B one morning...with a view of the parking lot.  It seemed that someone in a white Chevy SUV had a difficult time parking their car the previous night!  Though there was plenty of room on the other side, the Chevy was angle parked just inches from our Kia Soul.  Hubby quit smiling when he realized he had to climb in the passenger door and over the console to get into the driver's seat. And let's just say that getting out of that tight spot was not a simple matter!

Speaking of B & B's...we stayed at some wonderful ones along the way. 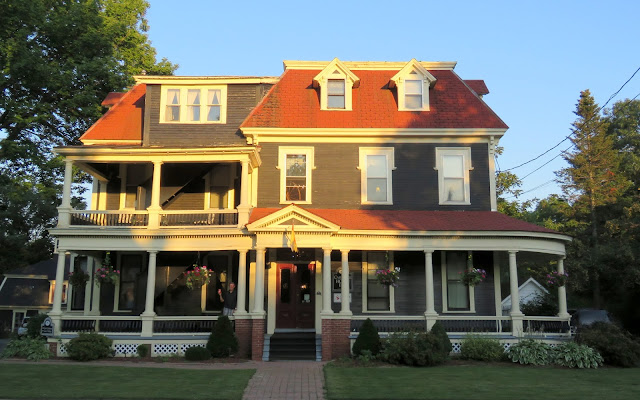 We stayed at the Carriage House Inn in Fredericton...an 1875 Queen Anne-style Victorian mansion.  We were on the third floor and most thankful that our room came with air conditioning since it was muggy and hot during our stay. It's always fun to visit with other guests over breakfast. Our tablemates at the Carriage House were from Philadelphia, Penticton, and New York.  We discovered that we had been on the same tour in Quebec City with one of the couples just days earlier.  Another couple we met up with again in PEI several days later.  They seemed like old friends by then! 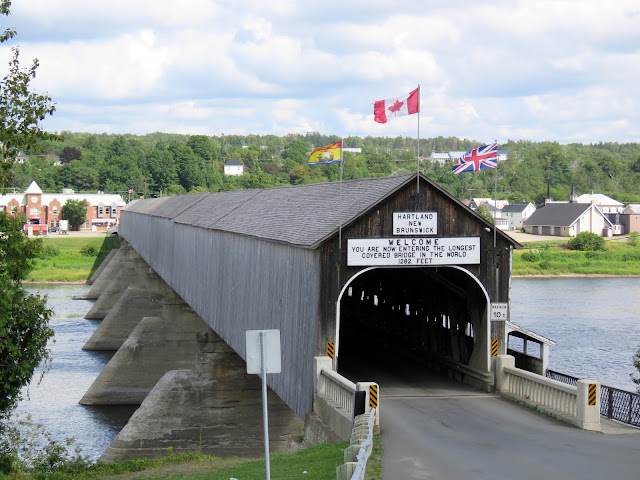 ...we crossed the world's longest covered bridge in Hartland. 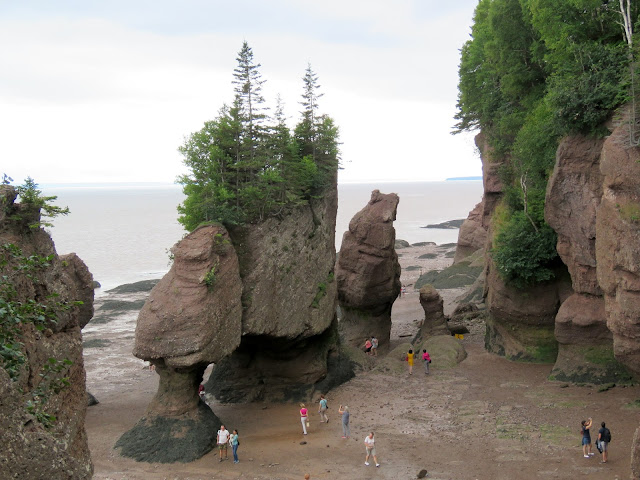 We walked the ocean floor on the Bay of Fundy...during low tide, of course! 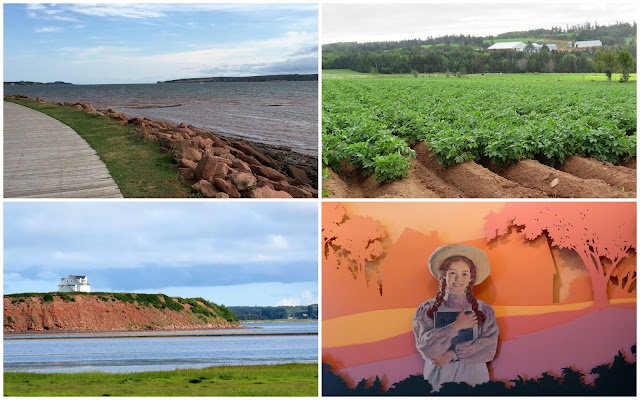 In PEI...it seems that everything is red (including the cliffs, the beach, the dirt and Anne's braids). We so enjoyed our time on this beautiful island! 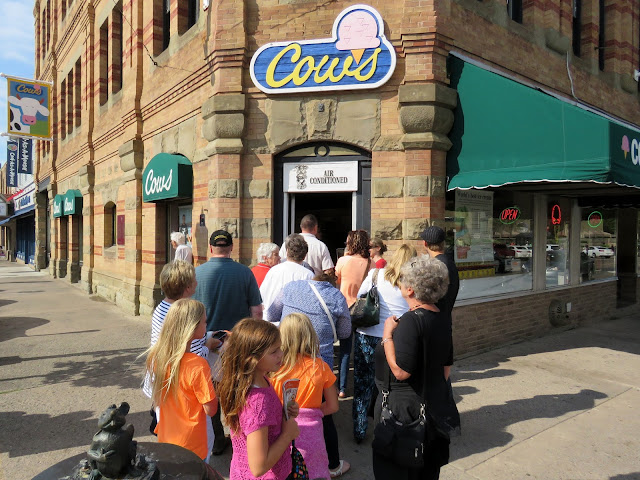 Who knew that Cows ice-cream originated here?  Judging by the line-ups at this store front in Charlottetown...it is worth waiting for! 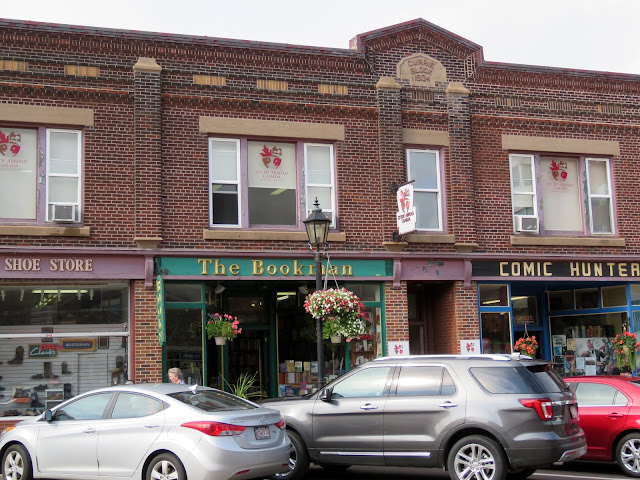 Just down the street from the ice-cream shop...is The Bookman.  I felt like I was back in Chilliwack for a moment...since we have a wonderful bookstore on the main street of our old town with the same name.  Though they are not in any way connected...both The Bookman in Chilliwack and in Charlottetown made the list of 'Charming Canadian Bookstores you need to visit'.  Visit we did!
For the most part...the weather was warm hot and beautiful.  We had heavy rain the day we left PEI......where the only photo I took was this one between swipes of the wipers. 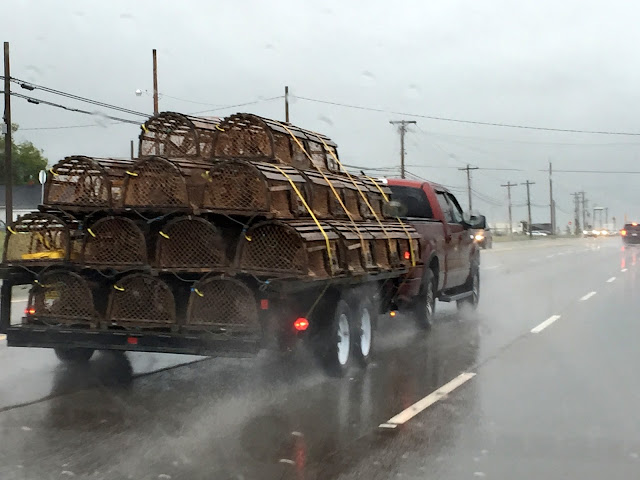 Truckloads of lobster traps are not seen on highways where I come from! 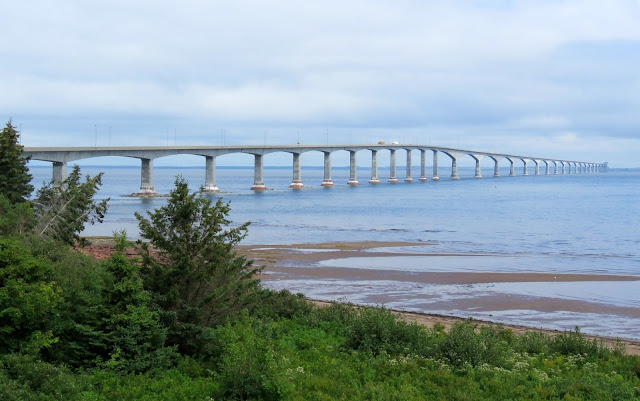 I was thankful to have taken photos of Confederation Bridge on our arrival, since it was lost in the rain and the mist on our departure.

Our return to Quebec took us north along the Acadian Coastal Trail on the east coast of New Brunswick.  We felt like we were already back in Quebec...since French is the language of choice over there. 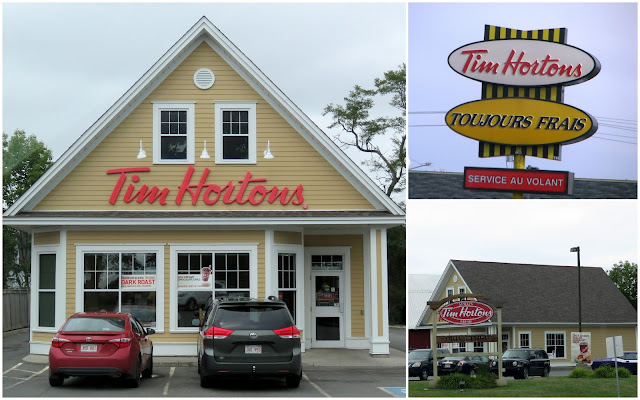 The sign at a Tim Horton's where we stopped for lunch read 'Toujours Frais' instead of 'Always Fresh'. The menu inside was only in French...though we decided that the pictures told the story in any language.  Our server spoke only limited English...and recruited someone else to serve us.  While we had our lunch...we listened to the happy sound of other patrons visiting around their tables. We never understood a word.

Once we were back in Quebec...we took the ferry across the St. Lawrence and drove along the north shore. We spent one night in Tadoussac... 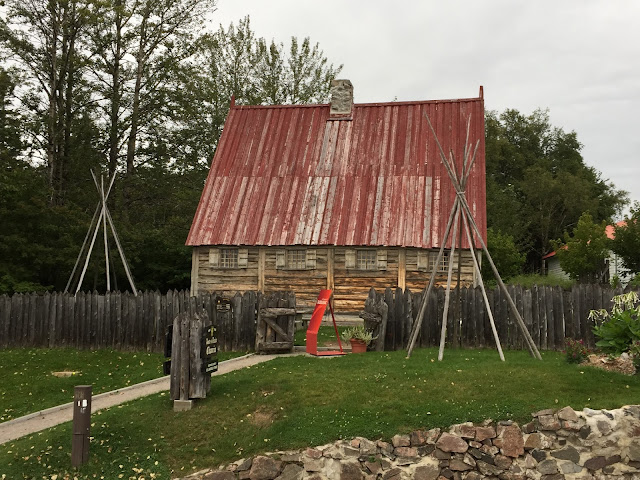 ...France's first trading post in Canada and the oldest surviving French settlement in the Americas.  Today it is a tourist destination...primarily for whale watching.   We saw many white beluga whales from the deck of the ferry as we left Tadoussac. 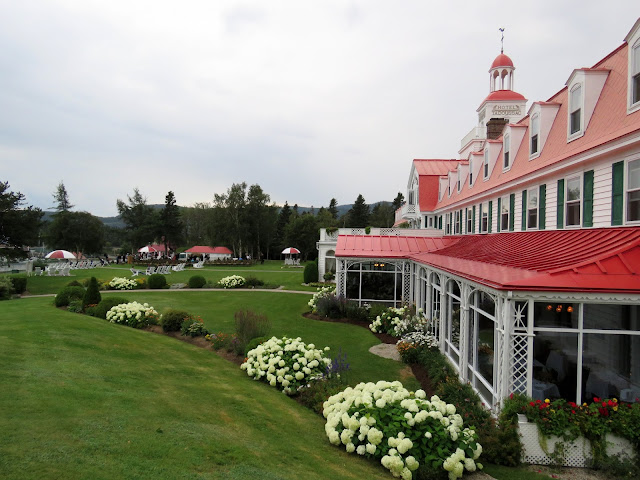 The Tadoussac Hotel is a landmark resort...that opened its doors in 1864. There was a wedding happening on the front lawn while we were there. 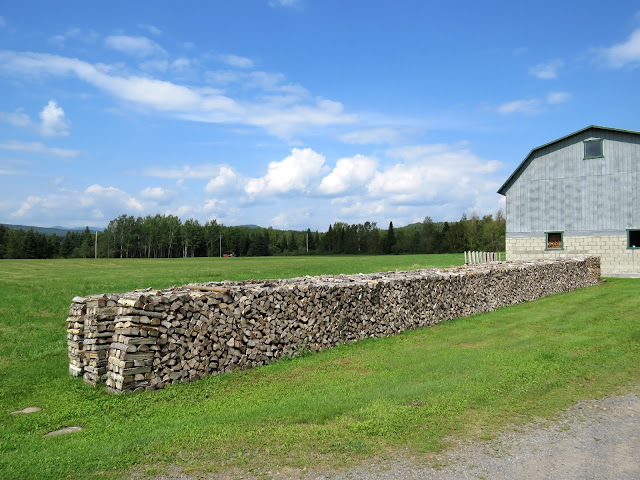 I must include one photo of a neat and tidy wood pile...as seen everywhere on the east coast.  It's been a long time since we were able to burn wood for heat in my corner of the world...but over there it seems to be the fuel of choice!  There was nothing messy about their wood piles either. 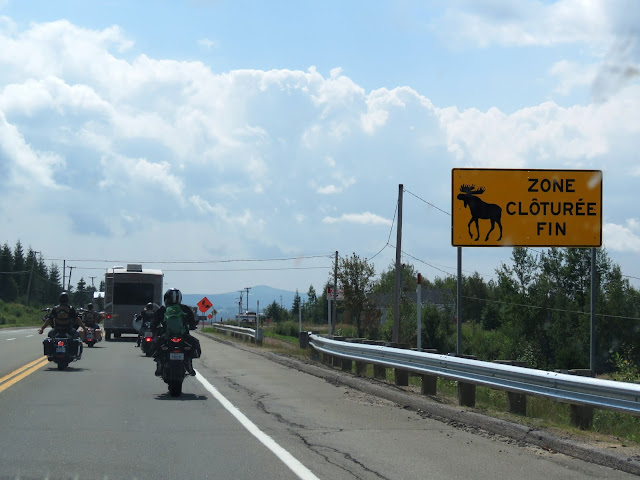 We shared the road with motorcycles, motorhomes and moose.  Well...mostly just signs warning of moose! 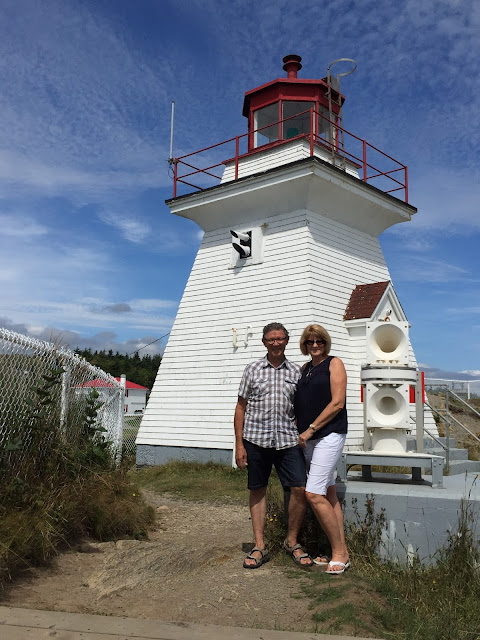 We saw lighthouses along the St. Lawrence...on the Bay of Fundy...and on the northern shore of PEI.  They are a wonderful reminder of the not-too-distant past.

This post is plenty long enough so I'll leave you with one last photo... 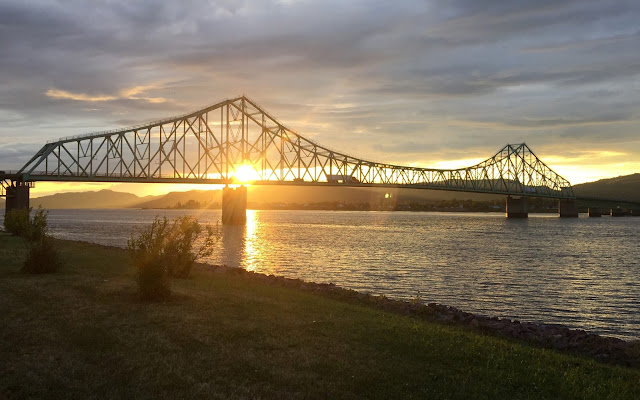 ...a sunset, of course!  We spent one night in Campbellton, NB...and walked along the riverfront in the evening as the sun was setting.  In the morning we crossed over that bridge into Quebec.

So that is a wee peek into our most excellent road trip adventure of the past few weeks.  Now that we are back at home...there is much to catch up on and it is cropping time on the farm.  I'll be back with posts from the different provinces as I 'unpack' my pictures and find time to journal.  Thanks for joining me 'on the trail'!