And now...on to the cruise ship bound for Croatia. 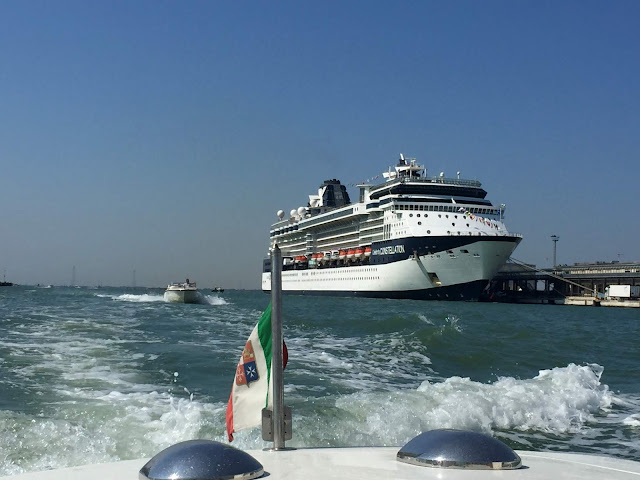 After two wonderful days in Venice, we hailed a water taxi to take us to the cruise ship terminal. 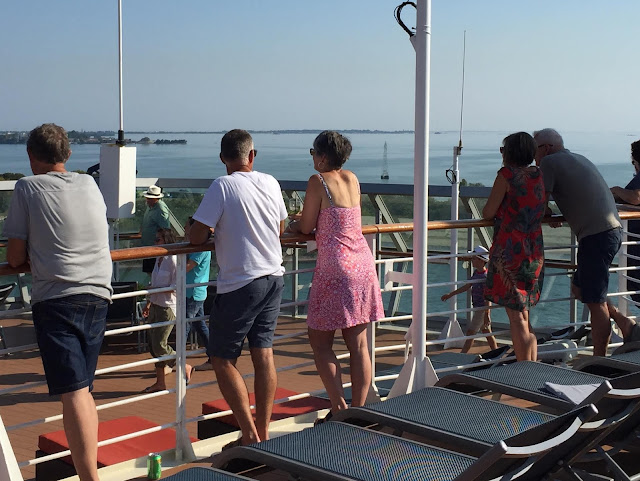 We checked into our stateroom...had the first of many delicious meals on board...and made our way to the upper deck as we left the harbour.  Or is it a lagoon? 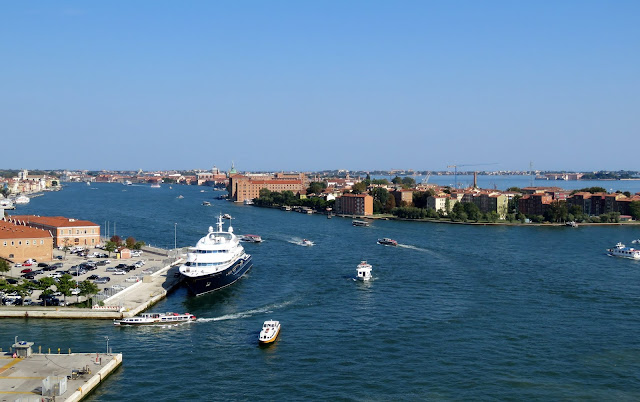 Farewell to to the city of waterways and  islands... 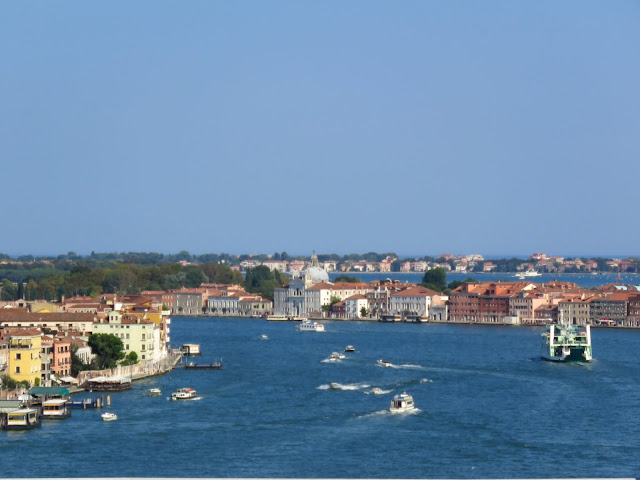 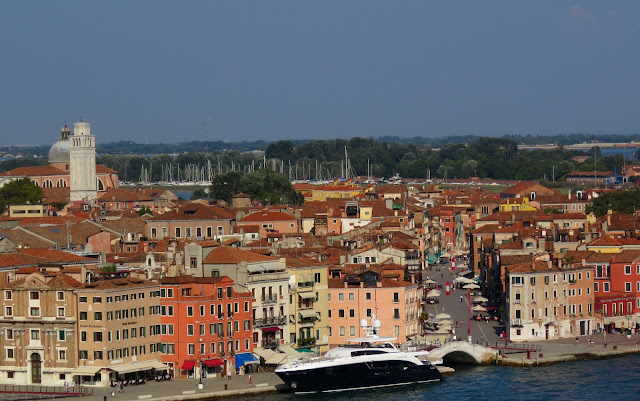 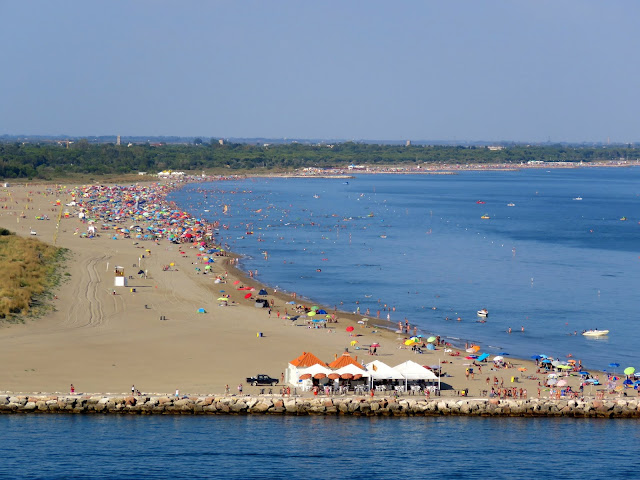 We passed by beautiful beaches as we sailed out and away. 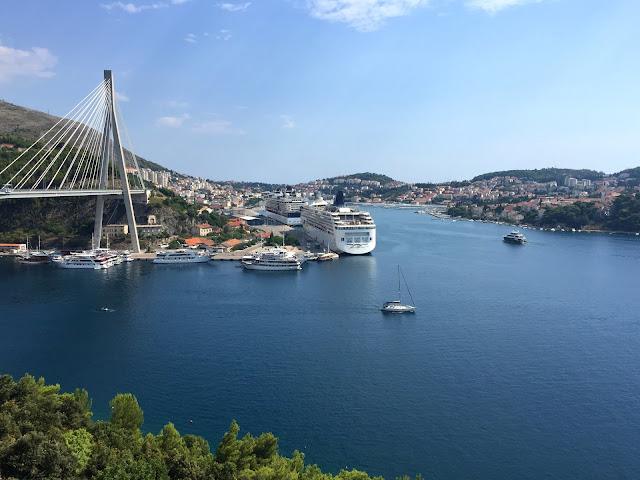 After a good night's sleep...we awoke in Dubrovnik, Croatia. It was nice to have a cabin with a deck and be able to check out our surroundings anytime. 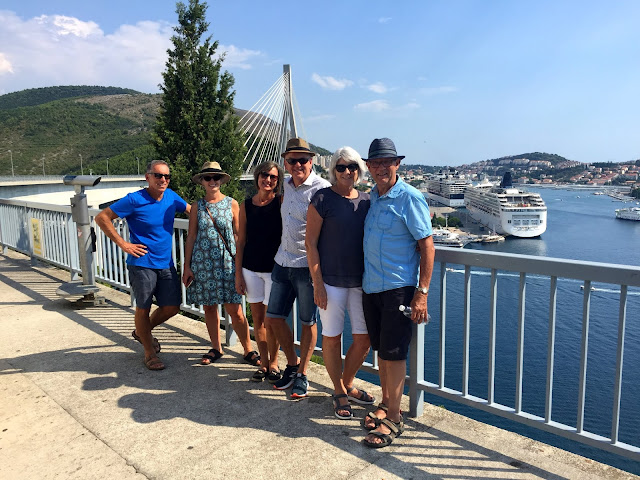 We found a cab driver with a van who was more than willing to take ous for a tour.   Our first stop was the Franjo Tudman Bridge...which was finally completed in 2002. Construction began in 1989 and then ground to a halt during the Croatian War of Independence in the early 90's.  There are great views from the bridge. 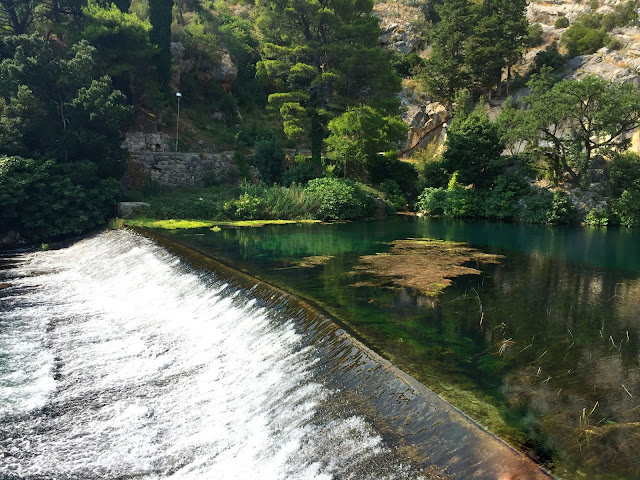 Our next stop was a lovely tranquil spot on the spring-fed Ombla River...it has its beginnings under ground somewhere! 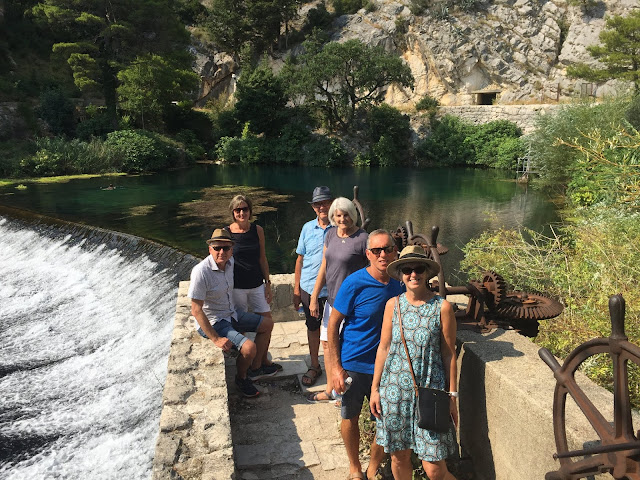 It is a source of drinking water for the city... 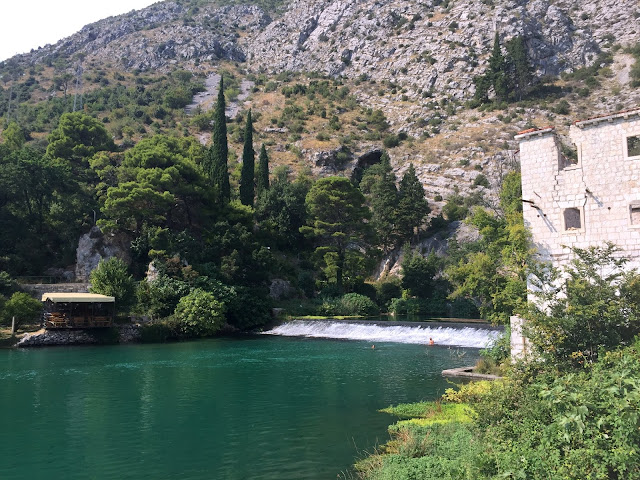 ...and we also observed a few folks taking a refreshing dip.

Our trusty driver/tour guide took us to a viewpoint at the top of a hill ... 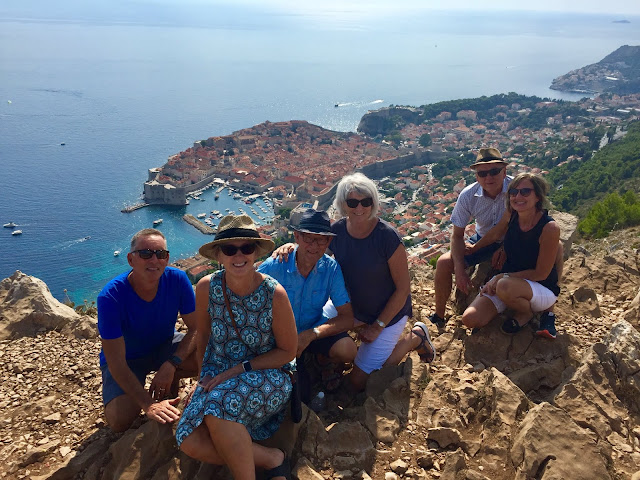 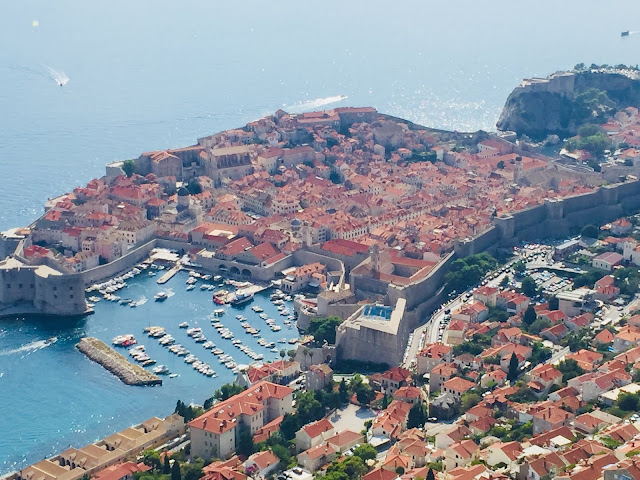 We saw the wall around the 'old city' and decided we would walk that wall the next day. 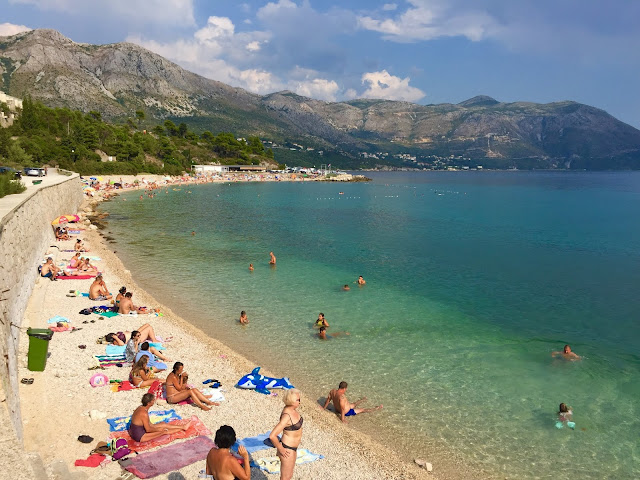 We visited Kuparoi beach...a beautiful beach right next to the remains of bombed out buildings from the Croatian War of Independence in the 90's. Kupari was once an exclusive holiday resort frequented by thousands of Yugoslavia’s military elite and their families in its heyday...during the time of  President Tito. 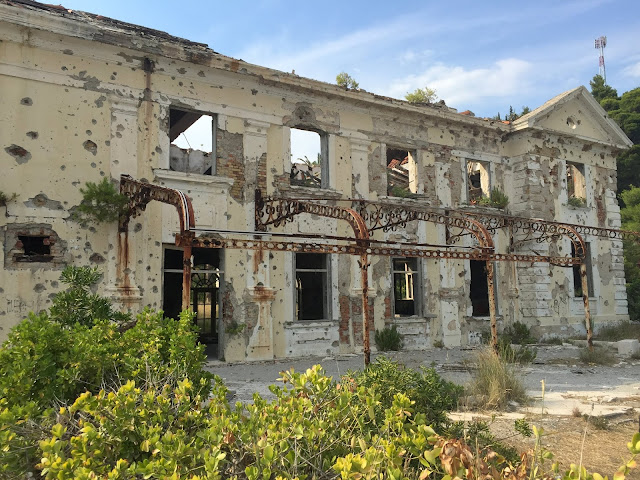 Its five extravagant hotels had enough room for some 2000 guests at a time and a nearby campsite could hold over 4000 more. The People's Army destroyed the historic city in 1991. The skeletons of the hotels still stand as a reminder of their historic past. 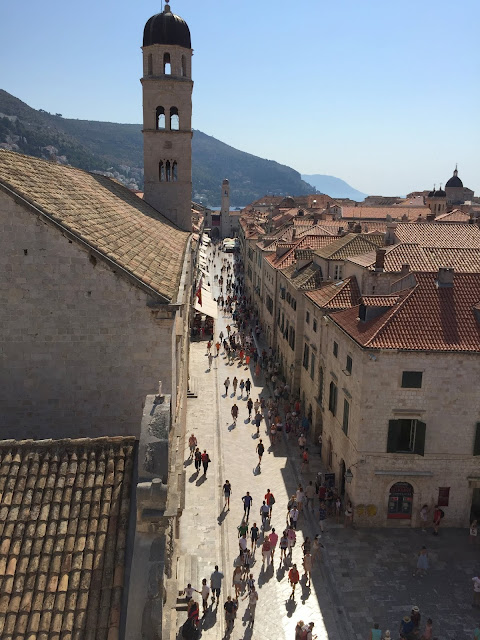 Though some of our group opted to take a dip in the sea that day...I am so glad we walked the wall. 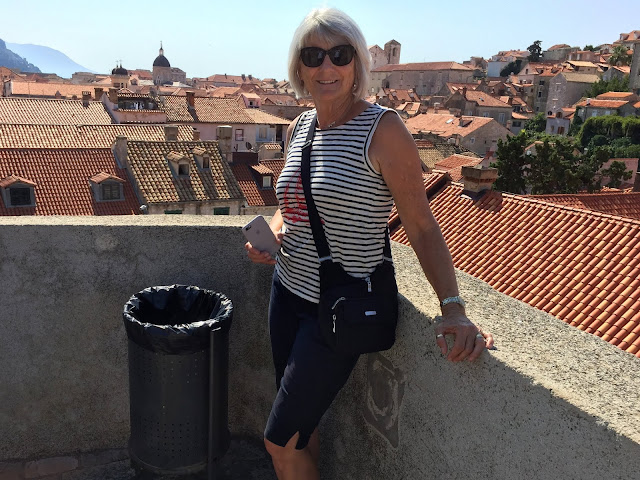 It is the best preserved city wall in Europe...and a UNESCO World Heritage site, which offers fantastic views of both the old city and the sea. 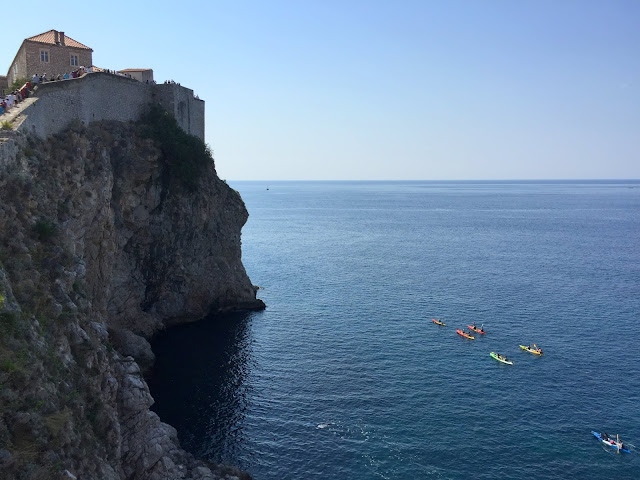 Parts of the wall date back to medieval times with the entire city being encircled by the 14th century. Dubrovnik was at one time a rival to Venice for dominance on the Adriatic Sea and the wall served to keep the enemy at bay. 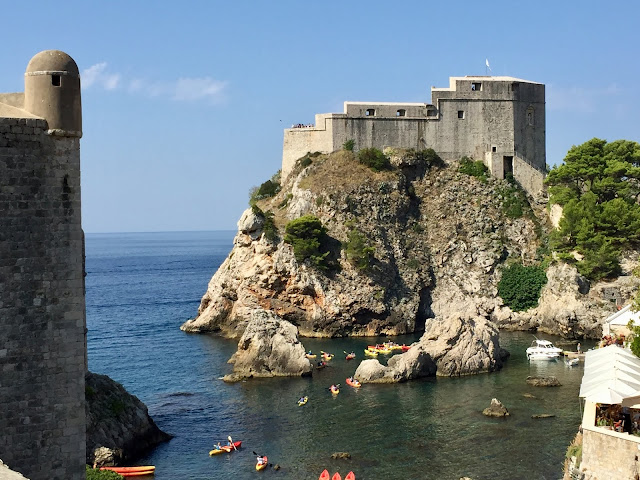 It was a great day for kayakers on the crystal clear water! 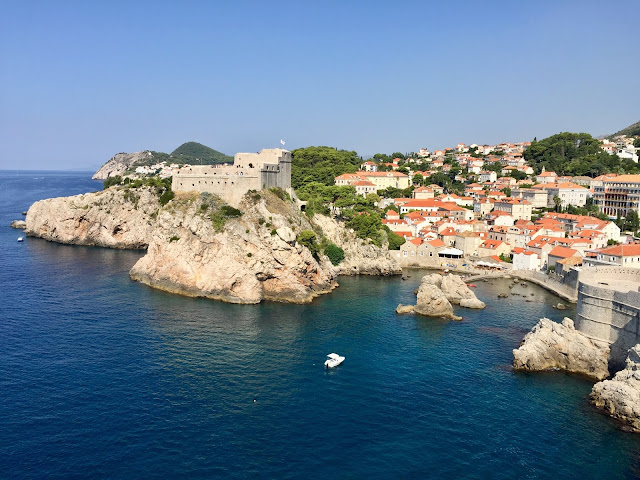 Can you tell why Dubrovnik is called 'the pearl of the Adriatic'? 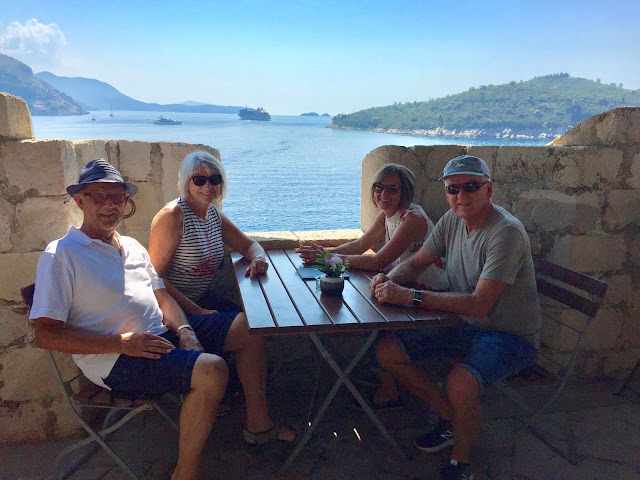 It  takes a few hours to walk the wall ( several kilometers in length)...but we stopped for refreshments at a cafe with a view part of the way around. 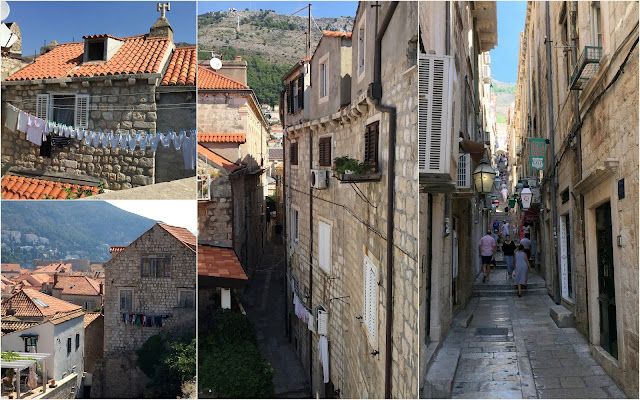 Life goes on in the old city...with laundry hanging out to dry and folks heading out their back doors. 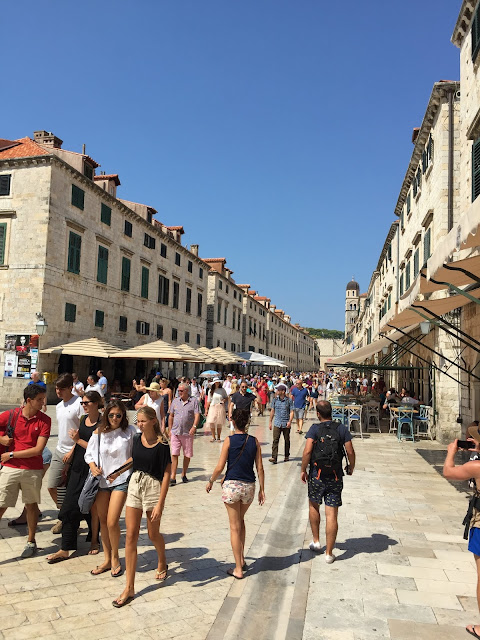 Once we were off the wall...we joined the masses of tourists milling about below. 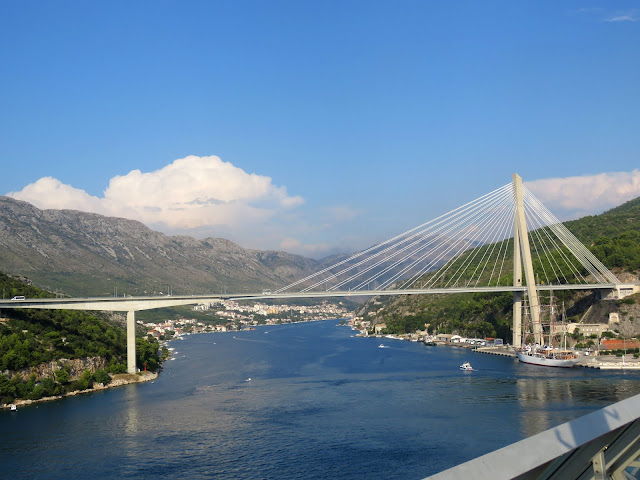 Dubrovnik was a pleasant surprise.  If you ever have a chance to visit...don't pass it up.