After an action-packed weekend...I hardly know where to begin! As I mentioned several days back...the kids were planning a birthday party for their dad. He was told to dress in grubbies...and show up at Sniperz Paintball Range on Saturday afternoon at four o'clock. They had invited a number of his friends (they found a few who were willing to get shot at!)...and organized a paintball party. The wives came to watch (mostly visit)...and what a strange and fun birthday party it was.

When we arrived at the location, it definitely looked like a war zone. We saw guys coming and going in full gear...it all looked rather scary to me. Our group on the other hand, were novices for the most part. Some brought coveralls...some were in shorts, willing to bear the pain! 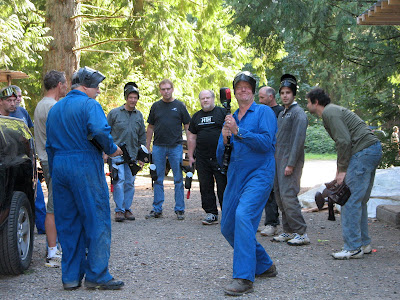 First they had their safety talk... 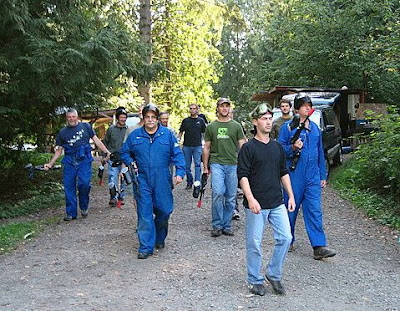 ...and soon they were marching off to war. They formed two teams and off they went to play their games. The object seemed to be to stay clear of the enemy...or you would be marked by the opposition's paint. 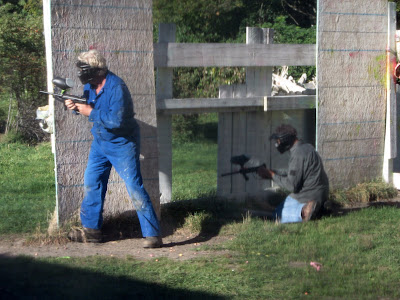 For the most part, the games took place out of sight...but here I caught hubby and his pal hunkering out in the field. We thought they would be done in an hour or so...and had pizza brought up at that time. 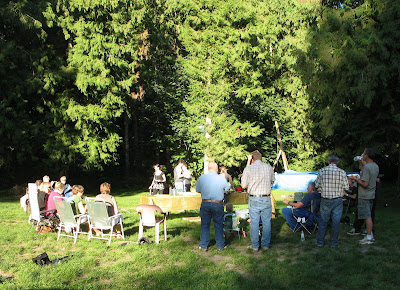 As it turned out, we interrupted their intense paintball tournament to have supper...and off they went until dark. They came in from the battlefield hot, sweaty and happy...it was like a bunch of little boys playing cops and robbers. I had some great group photos of the twelve paint-splattered and war weary guys at the end of the day (or so I thought)...but my camera settings had somehow gone awry and their were 24 guys in the picture. And so ended hubby's birthday celebrations for this year. It seems birthdays become a big deal when you get old!

We also had family/friends over for the weekend (they found good excuses to stay away from the war zone on Saturday night) and we made the trek to Bridal Falls with them yesterday afternoon. It's one of our local jewels...I'll take you there tomorrow unless I have other exciting news to share. 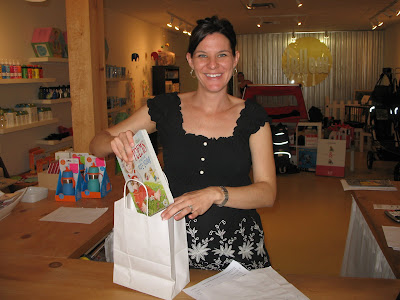 As far as I know, Heidi can still be found behind the counter at Lellow...where she was when we went to visit on Saturday.

Email ThisBlogThis!Share to TwitterShare to FacebookShare to Pinterest
Labels: adventure