A very long time ago...we bought tickets for a Seattle Mariners vs. New York Yankees baseball game for September 7th. We'd make it a family affair...three sisters and spouses would take dad out to the ballgame at Safeco Field in Seattle. We knew dad would much have preferred to see his beloved Toronto Blue Jays, but this was the only date that seemed to work for us all! The thing about ballgames is that they are best played in the sunshine...and the odds of having beautiful sunny day on the west coast are not that great...but we had the most gorgeous day yesterday!

We all knew the drill this year...we had done the same outing last year. Once again we borrowed a van...left home bright and early...waited in the border line-up for about 45 minutes...arrived in at Safeco Field in plenty of time. 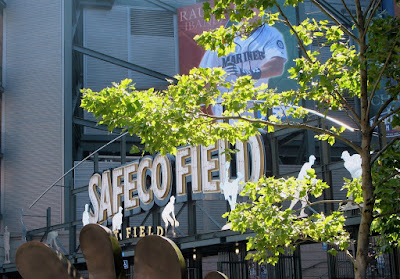 We parked in the same spot as last year...had lunch at the same cafe inside Safeco stadium and sat at the same table. 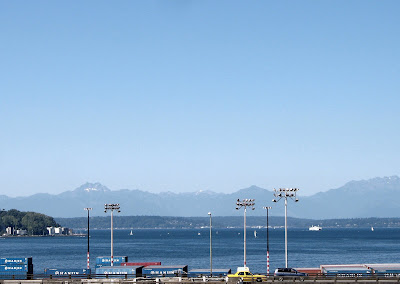 From our vantage point on the third floor we had a wonderful view of Puget Sound... 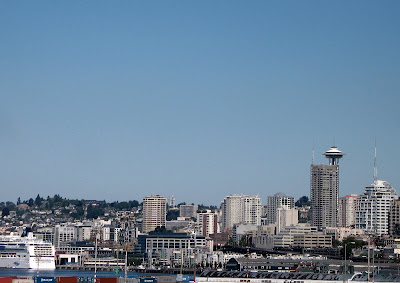 ...and the skyscape of the city centre, including the Space Needle. 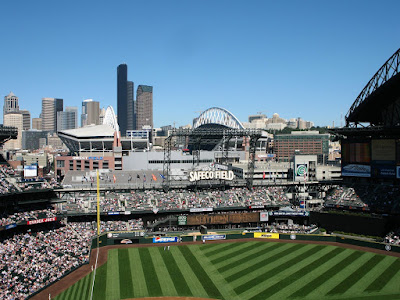 The Safe is a retractable roof stadium located in the heart of Seattle, which seats 47,116 fans...and most of those seats were full yesterday! I'm sure the retractable roof is closed on many an occasion...but we enjoyed sitting out in the great wide open. 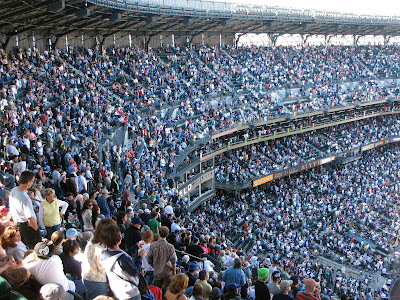 Our seats were way up in the nosebleed section this year...and we loved them. Brother-in-law Ron was a little disappointed that no balls found their way into his glove way up there, but he came prepared! You could see perfectly from high in the stands...the view of the city was incredible... 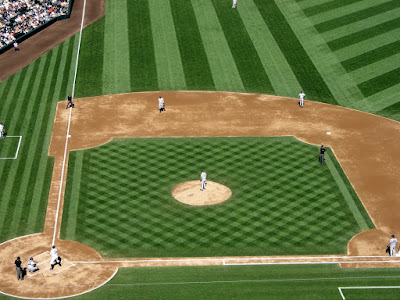 ...and despite all the bad press the Mariners have had this season, they played a near perfect game and handily defeated the Yankees. How's that for a perfectly groomed lawn? I might even be inspired to get creative with my lawnmower this week! 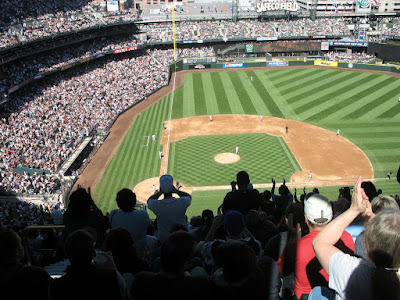 Those nine innings flew by in no time...and soon we were on our way home.

We heard lots of stories on the trip home...had a lot of laughs...and since we had worked up such an appetite with all that sitting and cheering, we stopped for a wee bite to eat on the way home. 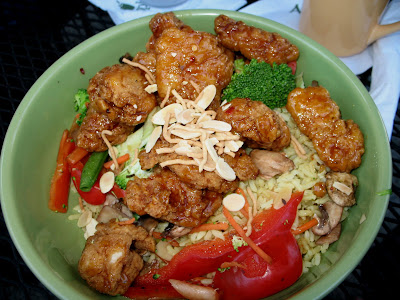 The bonus is that I won't need to cook dinner tonight...as there was plenty of 'spicy orange chicken bowl' to spare! 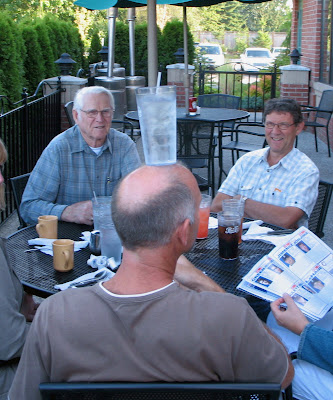 While Ron informed us of baseball stats, Terry cooled off his warm pate with a glass of ice water! The group photo we had taken by our server to commemorate the occasion was too fuzzy to save...she was better at serving tables than taking pictures. 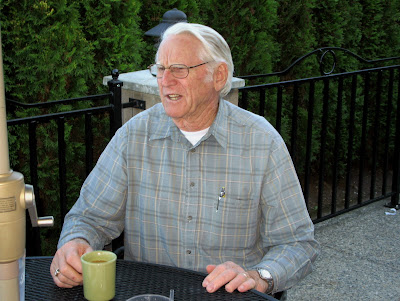 Dad will be 86 years old this week...and still going strong. Who knows if we'll be going to ball games together next year...but we sure had a fine time yesterday!