What you didn't know is that you were coming here for a biology class today! Since we have a nest of baby barn owls on the farm...I thought I'd share a pic of these cute little creatures with you. 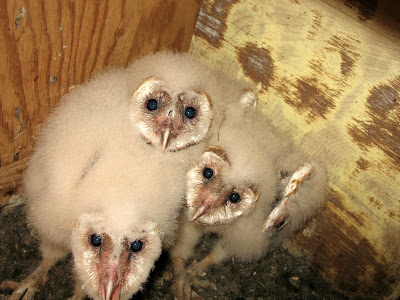 Our veterarian, Dr. Dick Clegg, has an avid interest in the preservation of barn owls and holds a banding license. He sets up and monitors owl boxes in our area...and we have had one in the peak of our barn for many years now. Since barn owls are strictly nocturnal, we really never see them. But every spring we have babies way up there in the rafters...and I actually made the big trek up the ladder to take a peek. I almost dropped my camera when I opened the box...their hissing gave me quite a fright.

Barn owls apparently have very good vision...but their hearing is incredible...they are able to pinpoint the location of the faintest sounds. They pounce on their prey in total darkness. 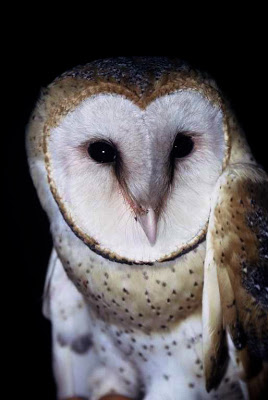 Barn Owls are monogamous...one mate for life. If a mate should die, they will not find a new one until much time has passed. During courtship, males present the females with gifts of food (not a bad idea!). He also feeds her while she incubates the eggs. Her more brownish coloring may allow her better camouflage when sitting on the eggs. Four to six eggs are laid at two-day intervals...and incubation of about 32 days begins as soon as the first is laid, so the first to hatch may be two weeks old when the last hatches. The baby owls leave the nest at about 60 days...and here's how they look at this time... 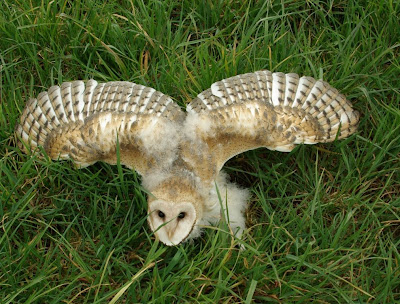 (The previous two photos are compliments of Dr. Clegg.)

Barn Owls do not hoot as some owls do, but have a rather blood-curdling scream. We also hear a lot of hissing....and a chattering sound on occasion.

There are only about 1000 barn owls in British Columbia...and they are considered an endangered species. Their declining numbers are due in part to the loss of their hunting habitat and their nesting places...the old wooden barns are being re-placed by new metal structures. Because owls hunt close to the ground, it is believed that ten percent of all Barn Owls are killed by vehicles on the road every year.
So we are doing our part in preserving these most strange and wonderful birds by allowing Dr. Clegg to use our century old barn as a nesting ground...and we quite enjoy having them on our farm!

Now that my class has come to an end...let me just clarify a few of yesterday's mysteries! The mistress of the home with 'bride in the bushes' happened to walk by yesterday...so I ran out to the road to have a chat. Here's the scoop...her grandchildren dressed her naked garden statue in a wedding gown over the weekend. She said they are always appalled by her unclothed garden statue, and took matters into their own hands. She had a good laugh when I told her what a stir they had caused...and today I see a naked woman standing among the shrubs next door! 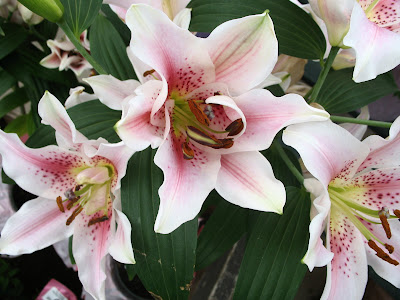 Yes, the lily capital of Canada is...Neepawa, Manitoba! It is not only the lily capital of Canada...but has also been declared the World Lily Capital, with over 2000 varieties of lilies growing in the area. My niece is getting married near there this summer...and we have made arrangements to stay in Neepawa. I'm looking forward to a fine time in Manitoba...and hope that the mosquitoes cooperate with our plans!


Now that we have solved the mysteries of the moment...it's time to get on with the day. The sun is shining...the yard is calling...and I'm on my way out.

Email ThisBlogThis!Share to TwitterShare to FacebookShare to Pinterest
Labels: life on the farm, minutia of life