I grew up reading Nancy Drew...Felicia Cartwright...Trixie Belden...great mystery books where no mystery was ever left unsolved. Maybe it was their influence...or maybe I'm just a problem solver by nature...but if there's a mystery nearby I'm up for the solution! 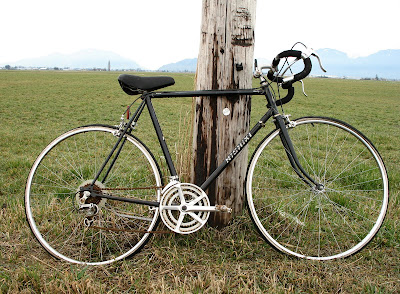 A short while ago there was a fine vintage bike left leaning on the pole just down the road. I never figured that one out...I'm thinking maybe it was stolen and the thief discovered the tires were not quite up to the task, and abandoned it. 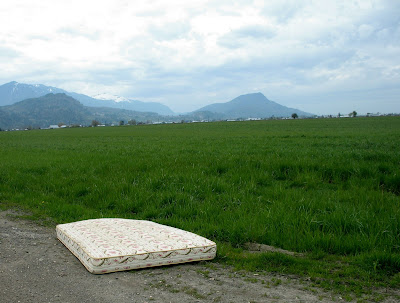 This past week we have had someone making their bed beside the road not far away. Every day as I pass by, I am wondering who it is that is sleeping here...and how long until they take up their bed and walk.

But there have been a few mysteries in this neighbourhood that I have actually solved! 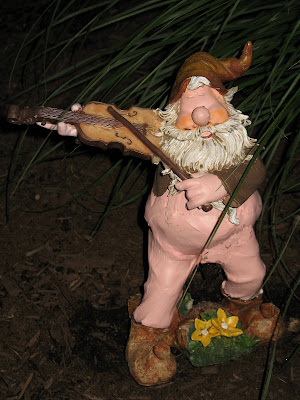 Last spring I noticed this garden gnome sitting in my flower beds (he actually needed to visit the photo shop this morning in order to be presentable here today!). I had no idea how he arrived there...and decided I would sew him some pants to match his jacket...and put him back in the garden. Eventually someone would admit to having placed him there! Sometime later, as I was sewing his new outfit, my daughter Heidi called...and was wondering what mom was up to. Hubby's response was, "She's sewing pants for a smurf". When I came to the phone and explained the whole situation...she responded in such a way that I got suspicious. It turns out that she knew all about it, since my dear son-in-law had planted the gnome! He was just passing it along...since he had found it in his flower beds and to this day has no idea where it came from.

At that point, I abandoned the gnome's half-finished outfit...and decided I would just pass him along to another garden that needed a little gnome music. His next home was in my sister Mary Ellen's garden...since Ron is a fiddler extraordinaire, I thought he looked quite appropriate in their back yard. He caused quite a stir when he was discovered...and it wasn't until my sister's 50th birthday a month later, that I confessed to having placed him there. He's not one to put down roots...and soon he was on his way to Manitoba in Mary Ellen's suitcase. She left him in a show garden in Manitoba...and once again, it took some time before his origin could be traced. Last I heard, he was moving to Alberta. So if there's a fiddling gnome in a garden near you...you know where he came from!

Here's my latest partially-solved mystery! This is my view directly to the south every morning when I awake. 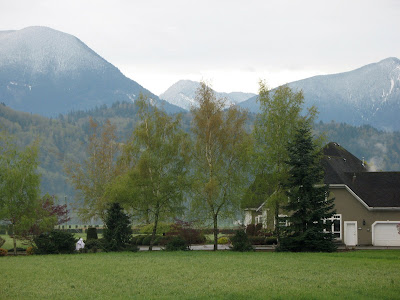 We tend to keep an eye on the neighbour's place, since her house has been burglarized three times in the three years that we have lived here...and twice we spotted something amiss. Last weekend, we awoke one morning and noticed something white among the shrubs. I got out the binoculars... 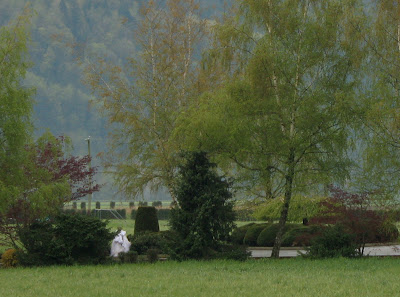 but it still wasn't quite clear. Had they covered a precious shrub in white plastic to protect it? I put on my hiking boots and trucked off across the field. Here's what I found... 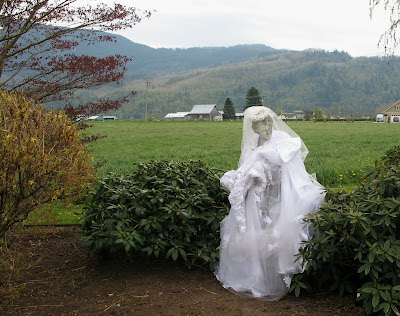 ...a garden statue dressed up as a lovely bride. Why? I have no idea...but she's really caught the attention of passers by! Someone stopped along the road a few days ago, wondering what the white shroud was...and quite concerned that it could be a human body swathed in white. Now that is ridiculous! One of these days I'll get the story...but I'm thinking that rather than sewing clothes for an unclad garden statue...someone just decided to dress it up a little.

When I completely solve the mystery of the 'bride in the bushes', you'll be the first to know!

Here's a mystery for those of you who are wondering what kind of travel arrangements I have been making...and where I am off to on my next vacation. I'm actually staying close to home for a few months...and then I am planning to visit the Lily Capital of Canada. Hmmm...where is that?

Have a fun day!

Email ThisBlogThis!Share to TwitterShare to FacebookShare to Pinterest
Labels: minutia of life, view from my front porch