camping in my own back yard!

I hadn't planned to go camping last night....but things don't always go quite as planned! This is how my day unfolded...

Things were rather busy on the farm...since the sun was shining. Elmer got the first field of corn planted...a rather small field, but it's a start. The forecast was still for showers, but Jeremy also cut down one field of grass. The calendar says it's high time...so they are beginning to feel the pressure of getting the spring cropping done.

Meanwhile, Heidi and I went fabric shopping. There's a baby on the way and things to sew! Our first stop was the quilting shop. 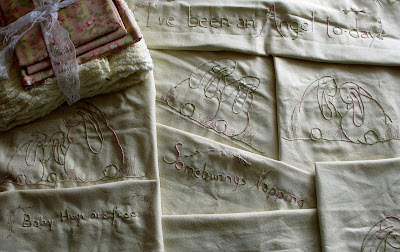 She wanted to see what was going to be happening with all those bunnies I had embroidered! 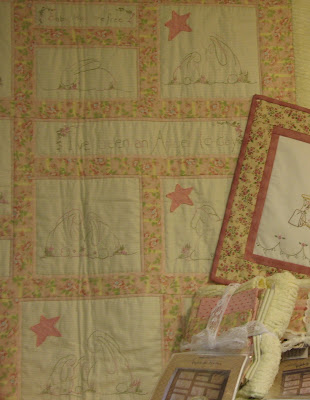 And this is how I'm hoping it will look like when I'm all done with my project.

Here's the funny part...there are no cameras allowed in the quilting shop. I never found that out until after this photo was safely in my camera, so it's mine now! A nice lady came to clarify their policies when she saw my flash going off. I never knew the whole quilting thing was such a big secret...but then, what do I know about quilting? I'll be needing that picture to complete my project...along with a few phone calls to my sister in Manitoba, who is an accomplished quilter. The bunny quilt has a chenille border around the outside and a nice soft flannel backing...and Heidi thinks it will be perfect for her little 'somebunny'!

Our next stop was Fabricland for all kinds of odds and ends...and what's a shopping trip without lunch? We checked out a place called Cookies, that neither of us had been to before...but where we'd go again, if only for their potato/farmer sausage soup!

Last night, it was off to the big city for a little culture! Anne Murray was in concert at the Queen Elizabeth Theatre...and I had bought tickets for hubby for Christmas. May 5th is not the best time to be taking time off work to drive into the city...but it was so worth it!

We saw Anne Murray in 1972...riding on the Nova Scotia float at the Rose Bowl parade. We were in California on a delayed honeymoon trip...and went to see the big parade. When she passed by we made a lot of noise for her, since no one in the States knew who she was...do they now? All these years later, she is ending a most successful career...and we thought we should be there to say farewell.

The concert was great...she was accompanied by her band, and the Vancouver strings. She did a number of songs off her new Duets album (where she sings with Celine Dion, Amy Grant, Shania Twain, Nelly Furtado...and others). Her daughter joined her onstage for a few numbers also.

It was a wonderful evening! The downside is always driving all the way back home after the concert. The traffic wasn't bad...we went through a Tim Horton's drive-through and picked up some coffee to make the commute more pleasant...and by midnight we were home.

Here's what we hadn't counted on! The power was out...and the garage door would not open. Suddenly it dawned on me that we were locked out of our home. Yup...we always drive into the garage & from there it's quite simple to get in. The house was locked up tight...and there was no key to be had! Jeremy and Broni have a spare key...but at this hour of the night, everyone was sound asleep. Our motor home is still on the yard from our last excursion, so we decided we may as well sleep there. Thankfully, the bedding was in the cupboards...and we went to sleep in our concert clothes. When I awoke this morning, I had a fuzzy teeth...and fuzzy eyes. Without my usual routine, I had forgotten to remove my contacts...so they slept with me for the first time ever. So that is how it came about that we camped in our own backyard! And let's just say that won't ever happen again.

I've been helping a friend edit digital photos this morning...and now it's time to get on with my day!

Email ThisBlogThis!Share to TwitterShare to FacebookShare to Pinterest
Labels: entertainment, minutia of life