It was some eighty years ago...in the mid nineteen thirties that Daniel Smith arrived in Shanghai. He came as a missionary with China Inland Mission and spent many years in China.  It was here that he married...and had four children.  One of those children happens to be the other grammy to three of my grand kids.  She wondered whether we may have passed by the boarding school in Shanghai where she spent several years of her life.  Maybe we did...though I am sure nothing is recognizable after all these years. After enduring atrocities at the hands of the communists...the Smith family eventually left China by way of the back door through Burma.  As I re-read the auto-biography of our daughter-in-law's grandfather...I tried to reconcile the China of his day with the one we just visited.  Is it that much different?  On the surface it appears to be.  Underneath...I think not.  There is still a communist government that ultimately believes they are the final authority.

Today I will take you to the Shanghai we saw.  The streets were full  of people...all 23 million of them it seemed!  Our first stop was... 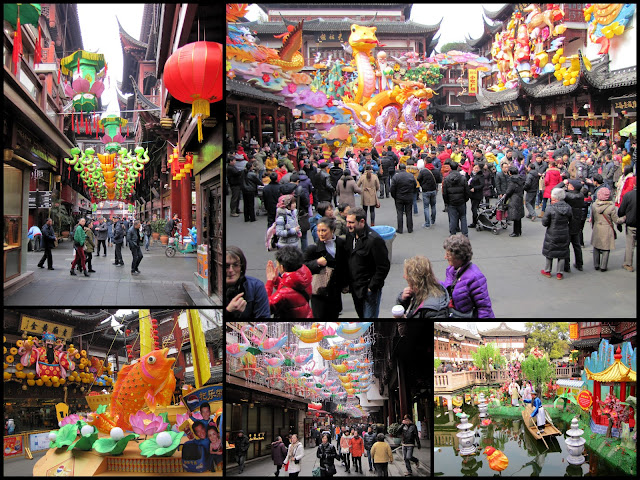 ...the Old Town Bazaar...a tourist mecca. The brochures warn travelers to stay away on national holidays because of the crowds. No one told us! 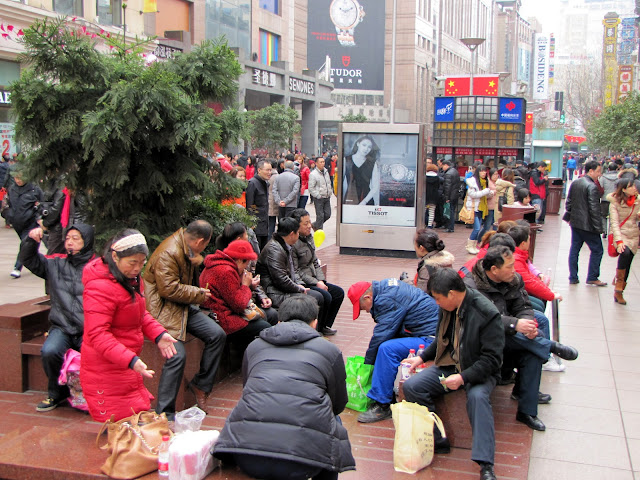 Our arrival coincided with the Chinese New Year and everyone seemed to think the market was a good place to spend the day. 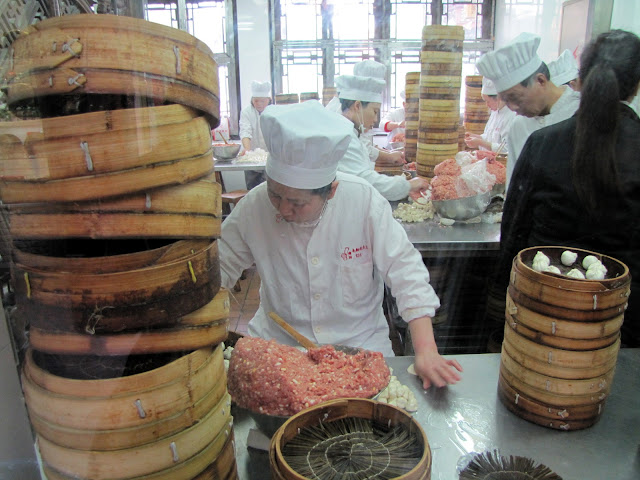 There were long line-ups at the concessions... 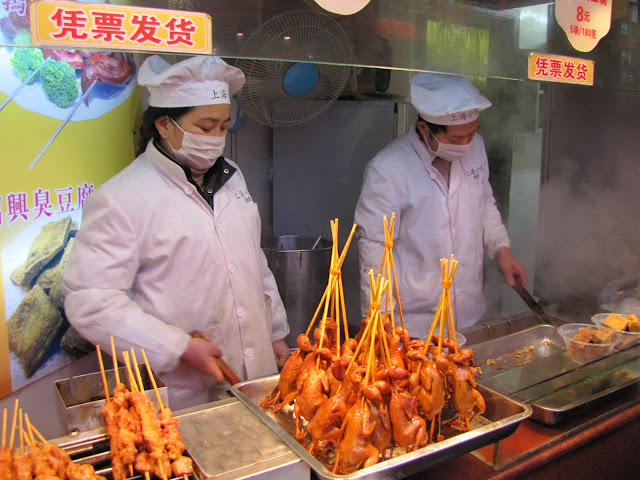 Despite the huge highways into the city...many locals still get around on two wheels. 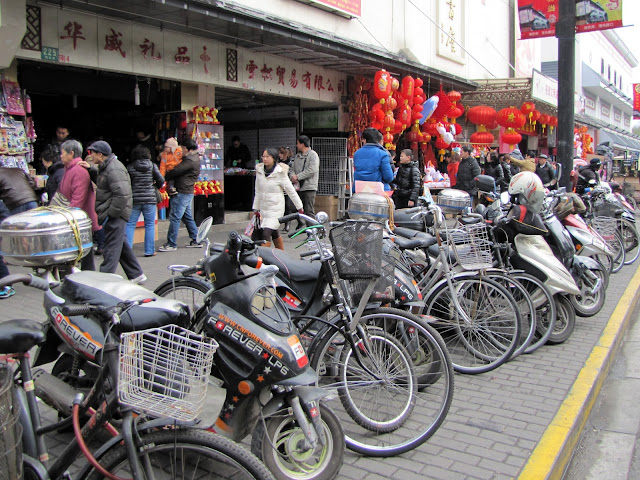 The cars are all new.  The bikes are all old....it seems. 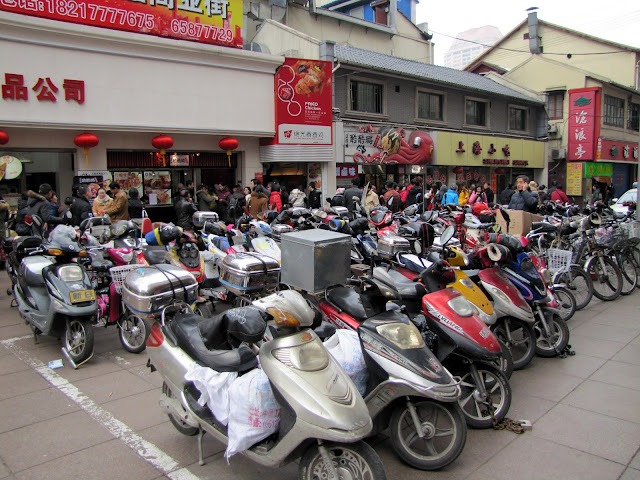 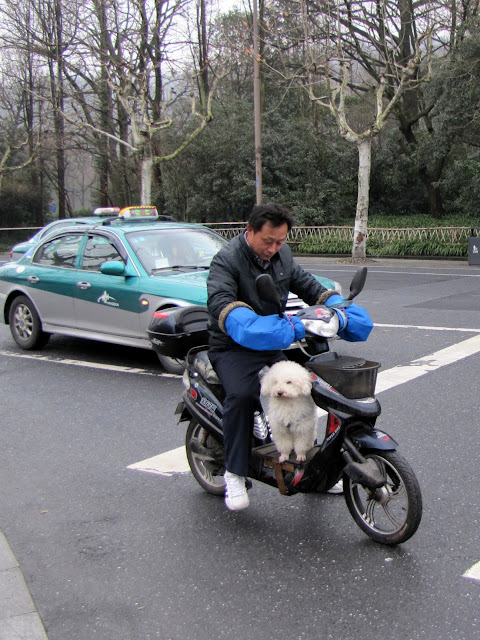 Oh...and sometimes the family pet!  Helmets are an unknown in China....and they seem to think headlights on scooters are unimportant as well. 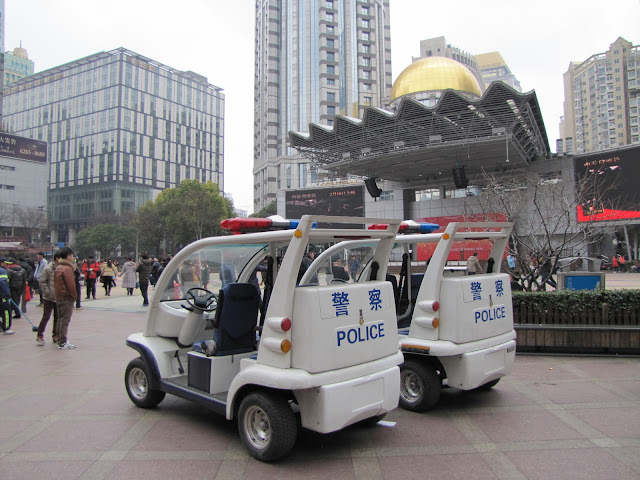 These police have no problem maneuvering around in the city in their carts. 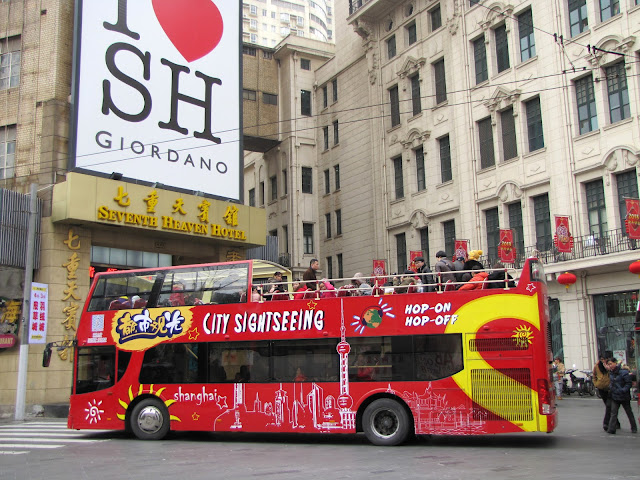 We had our own bus (complete with English tour guide)...but for those who  needed a narrated tour...this was the way to go. 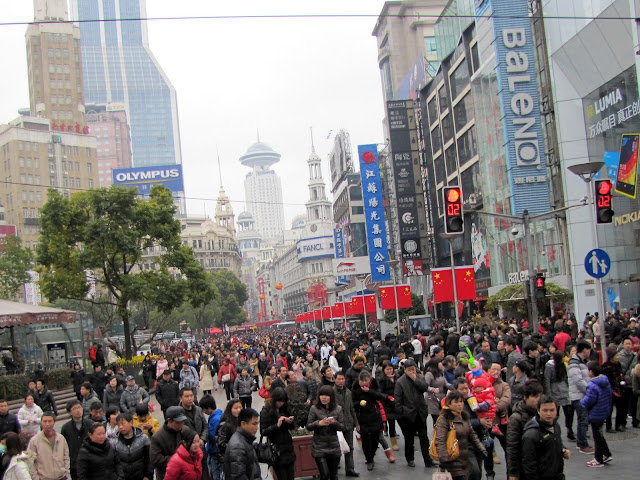 When our time of exploring on our own was over...we were to meet under the giant 'tea pot'...down one of these little side streets.  Oh dear...where was that again?  It is a little unnerving to know you can not 'phone a friend'...or ask the policeman for directions.  No one in that crowd seemed to speak English! 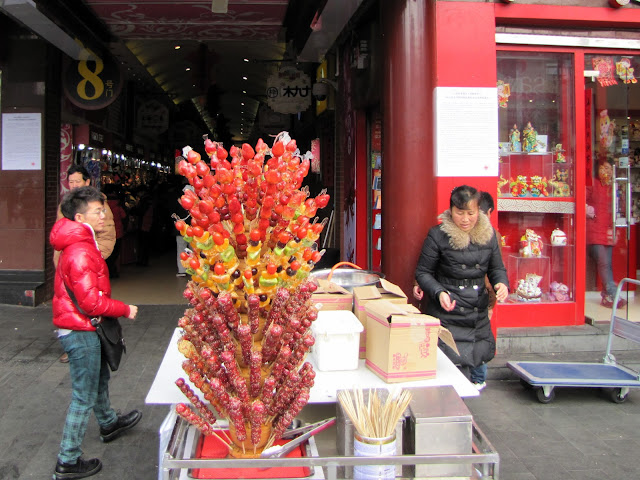 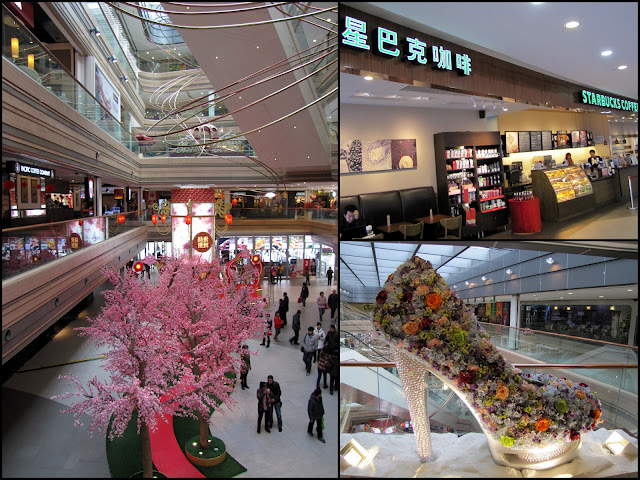 After exploring the old part of town...we walked Nanjing Street and the upscale shopping district...and paid a visit to Plaza 66 Mall.  There the names were all familiar to us...and bargaining was out of the question.

Next stop...The Bund.  Also called Zhongshan Dong Yi Lu...the famous waterfront has been regarded as the symbol of Shanghai for hundreds of years. 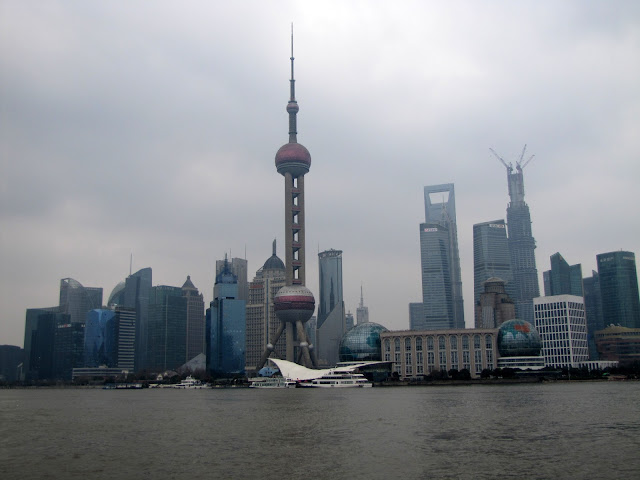 Shanghai is undergoing one of the fastest economic expansions the world has ever seen.  It has the largest stock exchange, the world's first magnetic train system, and well over three-thousand skyscrapers.  The World Financial Centre is one of the tallest buildings in the world (pictured in the back with the 'see-through' window on top)...however, it will soon be dwarfed by the tower coming up nearby.  Everywhere we saw cranes on top of buildings under construction.  During this building boom there have been times when 1/4 of all the cranes in the world are working in Shanghai. 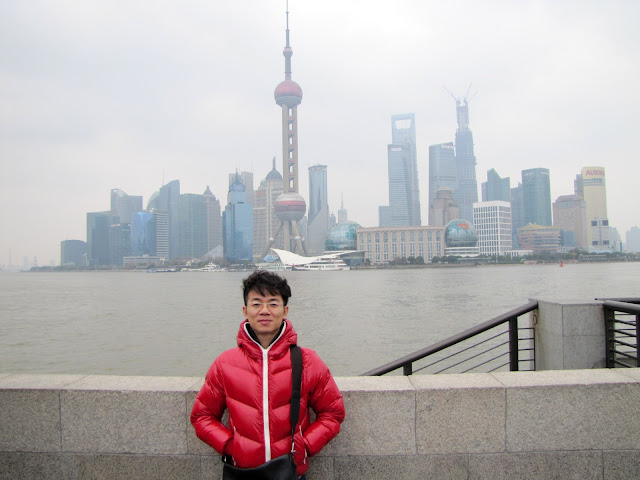 John...our favorite guy and source of so much knowledge! 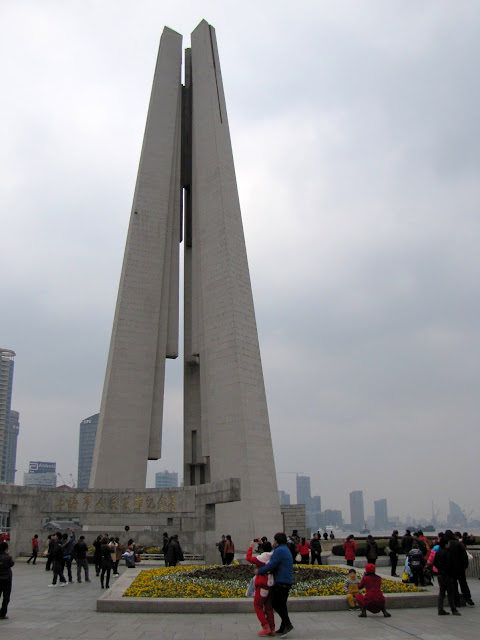 The Monument to the People's Heroes is a 24 meter concrete structure in Huangpu Park...built as a memorial for those died during the revolutionary struggle for Shanghai dating back to the Opium Wars.

After our walk along the famous waterway...we carried on to our next stop. 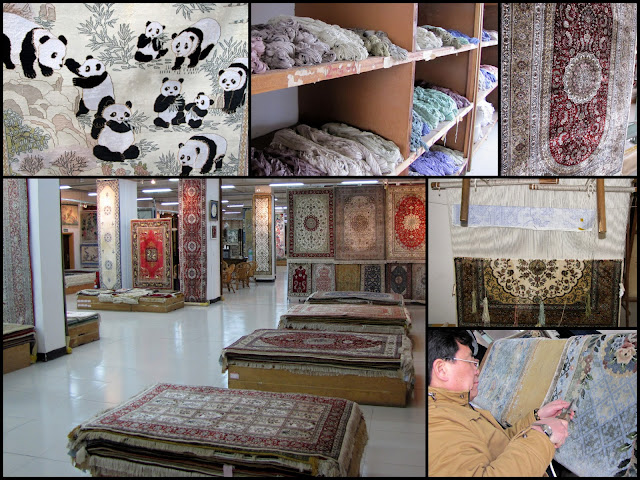 The Shanghai Silk Carpet Factory.  We had a tour...and though the factory was closed for the New Year holiday... a few workers came to show us how their carpets are made.  Beautiful works of art...they are! 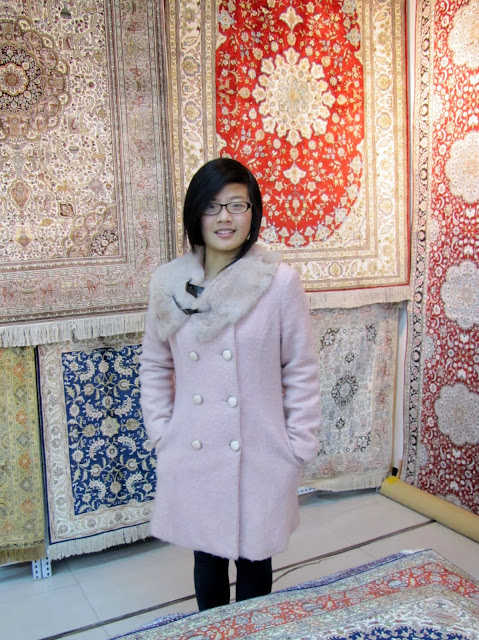 We had a nice chat with this young gal...who spoke a beautiful English.  She was an employee at the factory...a university grad...though she looked all of sixteen!  Though most of us were not in the market for a carpet...they did make a sale or two. 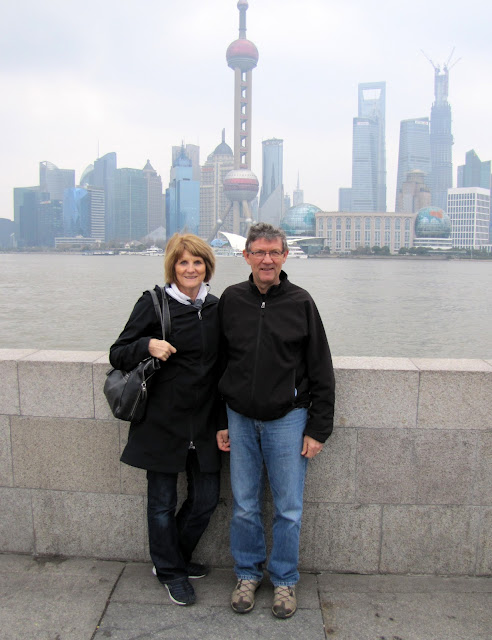 We left Shanghai after our first day of touring...en route to Suzhou.  Next stop!