what are the odds? 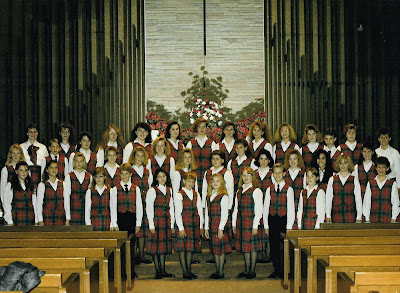 That was the extent of an e-mail I received from Heidi awhile back...and it brought back a lot of memories! Twenty years ago this fall, Heidi began singing in the Pacific Mennonite Children's Choir...an auditioned, faith-based community choir with singers aged 8 to 16. (Heidi is the dark-haired gal in the front row...just left of centre.)

Singing in the choir was not something I had suggested...not even something I really wanted for my daughter...simply because it would mean a lot of driving, since the choir was based a half hour drive from our home. But after much pleading on her part, I agreed to the audition...thinking the chance of her making the choir that year would be quite slim. I clearly remember the drive to Abbotsford on a bright September day in 1988. I can still picture her skipping in for the audition...wearing her short denim skirt and hot pink sweater...and not being one bit nervous. How well I recall her excitement when the director called to say she had made the choir. It was not only Heidi's life that was affected...but that of the entire family. Practices were not optional...and often the well-laid plans of mom and dad were put aside to ensure Heidi was at her practices and concerts. But it was an experience that was worth every bit of sacrifice on our part...something that few young people would ever have the opportunity to be a part of. I never tired of hearing their performances...and still pull out the old cassettes on occasion.

The Pacific Mennonite Children's Choir has been an excellent musical ambassador for our community, our province and our country over many years. Heidi had the privilege of travelling to New York with PMCC...of singing in Carnegie Hall (at the age of ten)..of performing at the Mennonite World Conference in Winnipeg in 1990...and of singing in Crystal Cathedral in California on a Sunday morning. Now, as an adult, she can fully appreciate the incredible opportunity she had at that time.

The choir still lives on...the next generation of parents are driving their children to rehearsals...and working tirelessly at fundraising. Could my granddaughter one day be singing in the same choir? One thing we can be certain of...the tartan has been replaced. What memories!