Let me take you back to San Diego with me...where we spent a few days seeing the sights and experiencing a little of California's Mexican heritage. 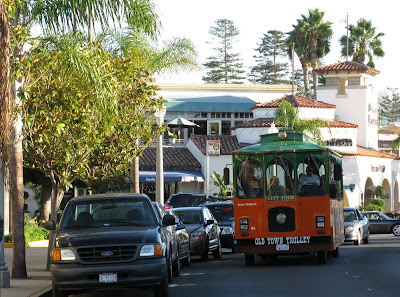 Not knowing where to begin...we decided to take a historic tour aboard the Old Town Trolley. The tour was fully narrated...two hours in length and covered a thirty-two mile loop through San Diego and Coronado. We had the option of disembarking at any bus-stop...and picking up the tour on a later trolley. It was a wonderful way to learn about the city! 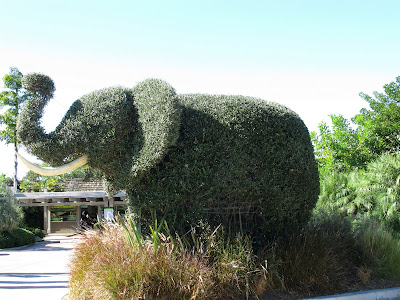 We boarded our trolley at Balboa Park...the home of the world famous San Diego Zoo, and so much more. 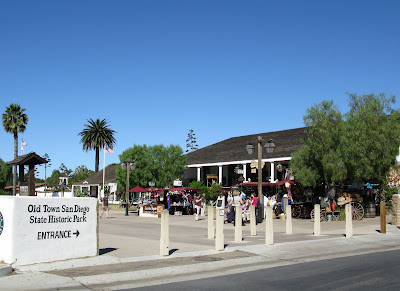 Our first stop was the Old Town Market...where we toured the Old Town Historic State Park. This area was home to the first European settlers...and California's first Spanish mission was located here. The state park encompasses nine blocks and is home to many historic structures...each of them a museum in themselves. After spending some time here...I had a pretty good idea of what life in San Diego in the 1800's would have looked like.

And since it happened to be lunchtime...we thought it only fitting that we experience the flavour of San Diego as well. 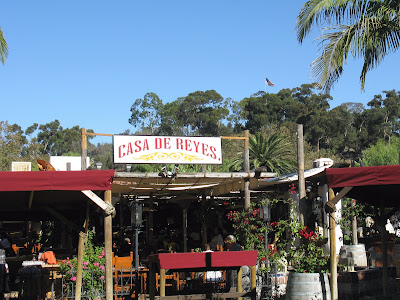 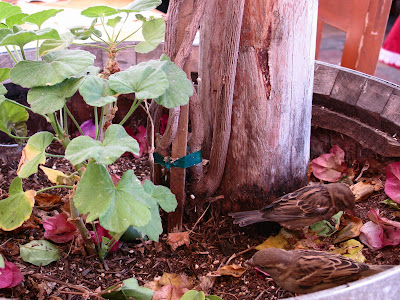 ...and we were entertained by birds in the planter next to the table as we dined! 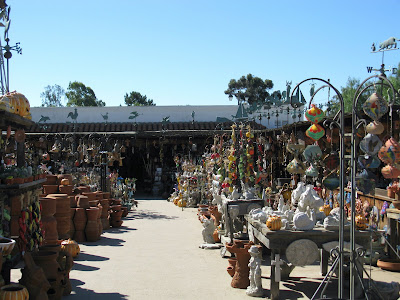 And...in case you think it was only about museums...there were plenty of places to shop if one so desired. Why go to Tijuana...it was all right here! 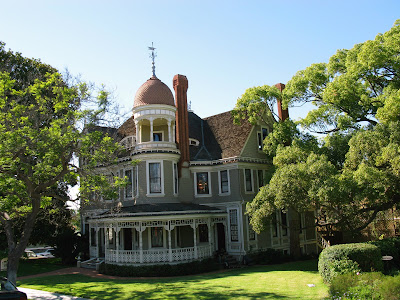 After lunch we carried on with our tour...through Heritage Park, with it's famous Victorian homes... and along the San Diego inner harbour. We decided we would return to this area the following day for a more extensive tour. 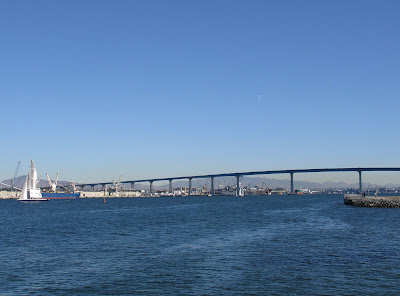 We crossed the two-mile long bridge to Coronado Island....a most picturesque place to spend the afternoon. 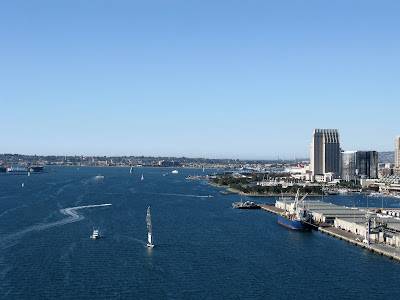 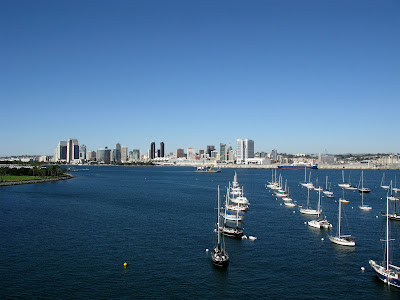 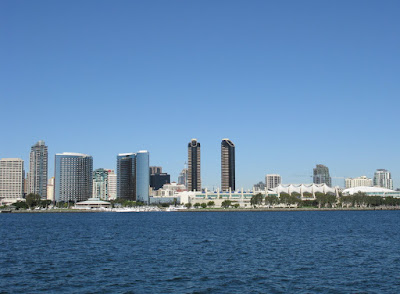 We strolled the walkway at 'The Old Ferry Landing'...a spot which is famous for it's panoramic view of the San Diego sky-line.

We passed by many shops...but the sign that caught my eye was 'Cold Stone Creamery'. Everyone raves about their fantastic ice-cream...and having never sampled it before (not available in Canada), this seemed the perfect time and place. 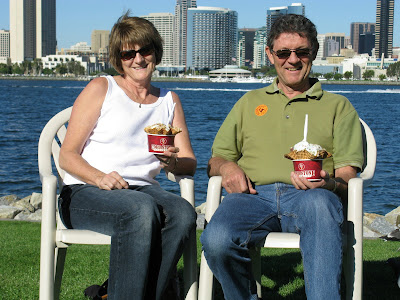 We both ordered small waffle sundaes...but we aren't sure they got the message right! We wouldn't have been able to do justice to one serving...never mind two. And yes...it was very tasty! 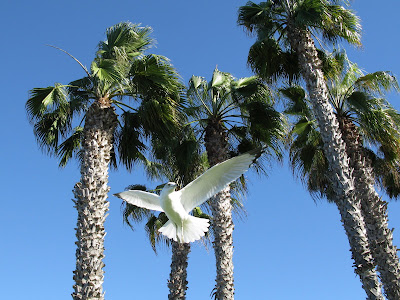 The seagulls seemed to think we may have something for them, and circled overhead while we enjoyed our ice-cream...making me rather nervous! 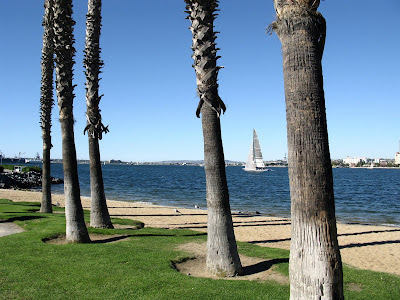 Eating ice-cream while watching sailboats and tugs in the bay...a wonderful way to spend a November afternoon...especially when we knew the rains were pouring down at home! 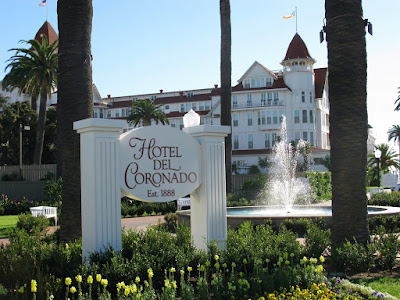 Back on our trolley once more...we rode across the island to the Hotel del Coronado... 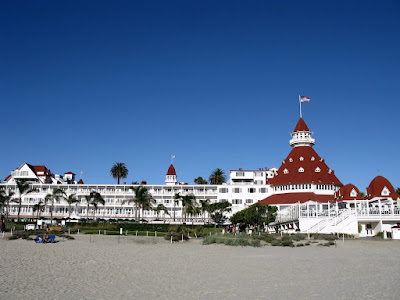 ...probably the most famous landmark in the San Diego area, and situated right on the beach. It was built in 1886...and every American president since that time has been a guest at this hotel. 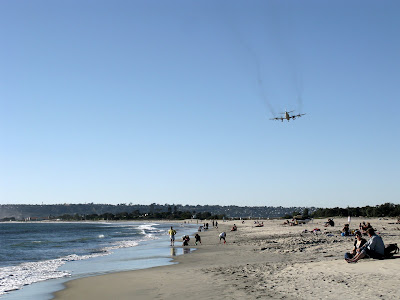 We walked the beach in front of the hotel...and could easily see landmarks in Mexico not many miles away. 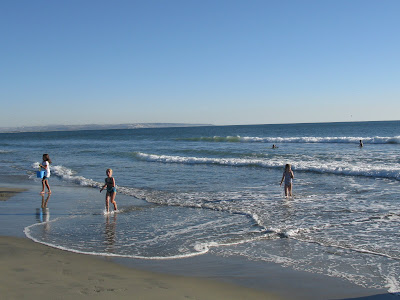 Known as the best family beach in California...we saw many kids enjoying the surf and the sand on this November afternoon. 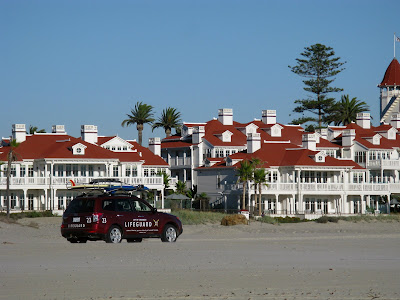 The day was drawing to a close...the lifeguard was leaving his post...and it was time to catch the last trolley back to Balboa Park, where we had left our car early that morning. Eventually we arrived back at our starting point...but not without a little excitement en route. As I mentioned earlier, our trolley was involved in a traffic accident on a freeway...and we were delayed for some time. We had the opportunity to assist a German tourist who was in quite a tizzy because of the delay. She was due to meet her children in her hotel lobby...and they had no idea that she had gone off on her own to tour San Diego. She had no way to contact them...and knew they would be frantic when she never showed up and the designated time and place. We offered to take her to her hotel...and had her reunited with her family before they had called out the search crew!

I'll take you on a harbour tour another day...maybe tomorrow. There is so much to see and do in San Diego...and the weather can't be beat!
Enjoy the day...