Nairobi is the capital and the largest city of Kenya...and was our first introduction to Kenya. We arrived late one evening... 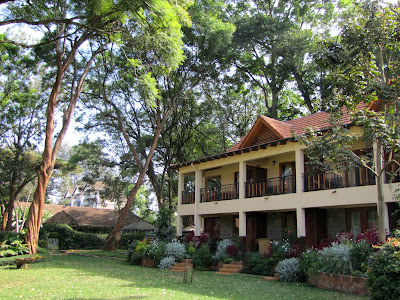 ...and quietly checked into our accommodations at the Mennonite Guest House.  We a awoke to find our room opened onto a lovely garden.  The guest house is an old colonial era house...which serves mostly as a place of respite for missionaries and humanitarian workers. 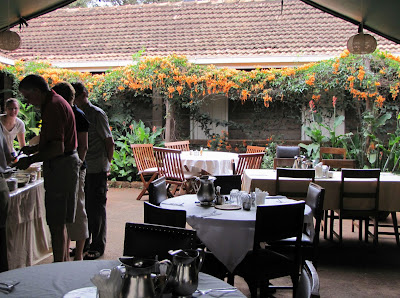 Our stay at the guesthouse included breakfast at 7:30 am...on those days when we hadn't already left for our daily excursion.  We enjoyed visiting with other guests...many were missionaries from Sudan who had been forced to leave because of the political situation there. 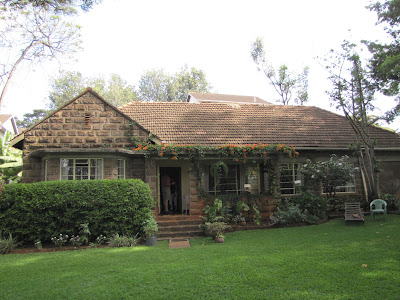 Our friends and hosts, Ron and Martha...live in a home on the same premises...just beyond the garden gate.  The entire complex is behind a wall...gated with a guard on duty at all times.  That's how it is in Nairobi!  Windows and doors have bars...gates have guards...and our friends do not make a practise of going out after dark.  Car jackings are frequent occurrences...and have happened just outside the place where we stayed.
For the most part, we travelled about the city in a van...and since I have no problem with car sickness, my designated spot was in the rear. The seat itself was great...just not the best location for taking drive-by photos.  Though I don't have many photos of the city itself...I'll paint a few word pictures!
The streets are rather chaotic for the most part...and traffic was often at a standstill. We thought that possibly the red light had a new meaning in Nairobi...since no one stopped. We soon learned that traffic signals are largely ignored! 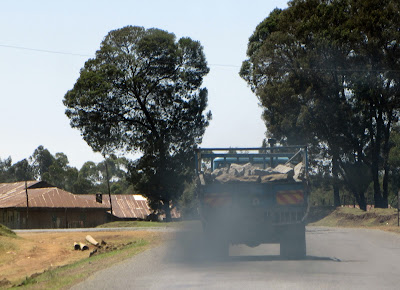 Clean air is not a top priority in Nairobi...and a fuel-fed fog hung over the city.  We found the roads to be quite rough and dotted with pot holes...though apparently they have improved immensely in the recent past.  A new highway through the city is presently under construction...by a Chinese firm. 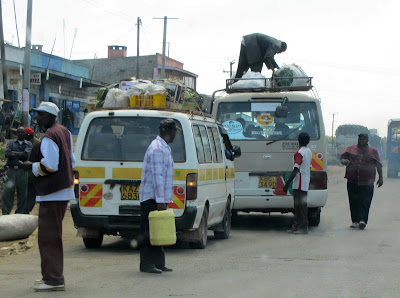 Matatus are the most common form of public transport in Nairobi.  They are privately owned mini-vans that seat as many as can be squeezed in...and cargo rides on the roof.  Safety is not a priority...and they don't necessarily come to a complete stop as passengers get on or off.  Riding a matatu was one Kenyan cultural experience I was happy not to experience!
Nairobi lies right near the equator, and so the climate is much the same year-round.  We found it to be most pleasant...cooler than we expected because of it's high altitude (5500').  Temperatures are around 75°F during the day, with cool evenings.
I'll be taking you along on some of our African adventures another day.  For now I will leave you with a photo that evokes good memories... 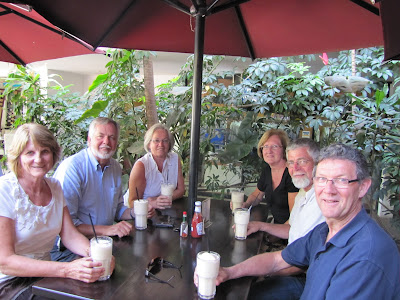