We are off to the countryside of Kenya today...leaving Nairobi bright and early before the traffic is total chaos. 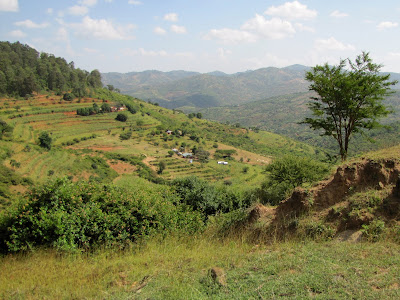 Our destination is an MCC sponsored project...a sand dam which provides water in an arid area where rainfalls are erratic are water sources have been scarce until now. 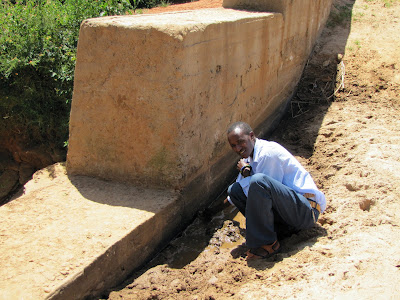 Our capable guide explained all about sand dams...and how they work.   They are a simple, inexpensive and low maintenance way to harvest rainwater. They provide a clean, local water supply for domestic and farming use and have been most successful in Kenya. 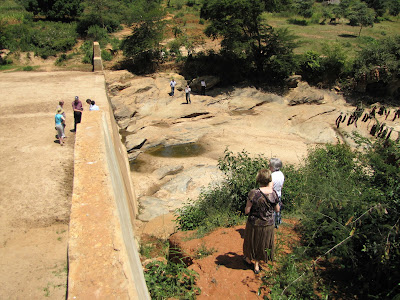 A sand dam is a reinforced concrete wall built 1-5 metres high across a seasonal river. Over several seasons, the dam fills up with sand...and stores the water in the sand behind the dam... 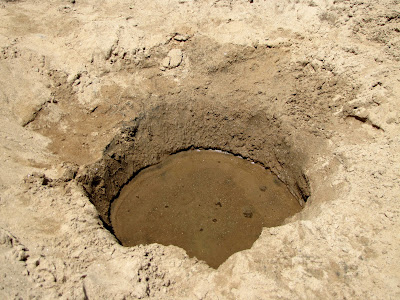 ...where it is accessed by digging holes in the sand.  A mature sand dam can store millions of litres of water, refilling after each rainfall providing a year round supply of clean water to over 1,000 people.
To the locals...who previously would walk several hours to collect water...this sand dam was like 'getting water from the rock'.  And here's the other thing I liked. The sand dams are not built by outsiders.  The community must first form a self-help group...and join together to provide all the labour.  MCC together with their partners provide funding, supplies and expertise.  Building sand dams is an immense undertaking for small, impoverished villagers but they are motivated by the hope for what seems like a miracle to them...a permanent source of water in their community...water for drinking, for irrigating crops and for watering animals. 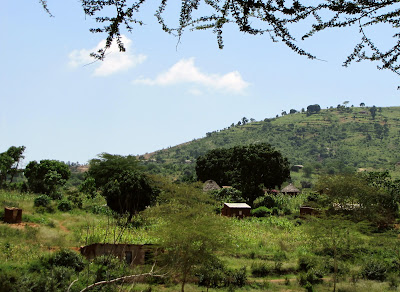 These were the homes of those who lived right next to the sand dam we visited.  Life for them has changed drastically since the first sand dam was built in their neighbourhood. 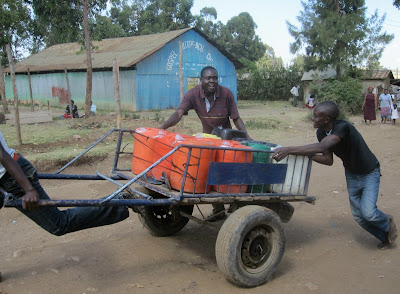 Throughout rural Kenya, we saw 'water on wheels'.  Water that we take so for granted where we live...is a precious commodity over there. 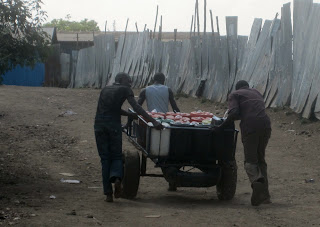 It gave a new meaning to 'running water'! 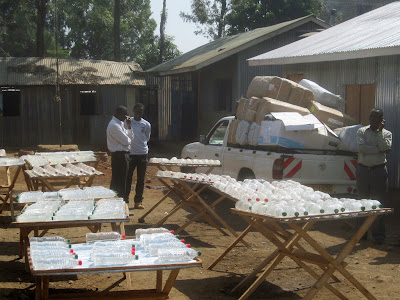 At several of the schools we visited, we found tables of bottled water laid out in the sun...all part of a program to provide clean, healthy water for the students.  Solar water disinfection (SODIS) is a simple procedure to disinfect drinking water. Clear plastic bottles are filled with contaminated water and exposed to the sun for 6 hours. During this time, the UV-radiation of the sun kills diarrhoea generating pathogens...preventing illness and saving lives.  So simple...yet so effective.

Our last stop today will be an orphanage for street children...high in the hills north of Nairobi.  Here too we saw they had been using the SODIS method of purifying their water. 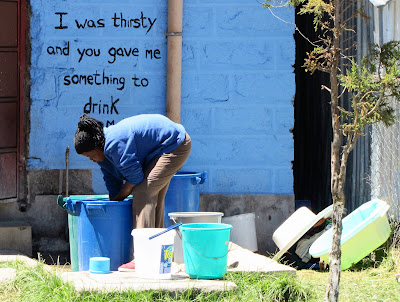 Though the orphanage has some 200 children of all ages...laundry is done by hand. 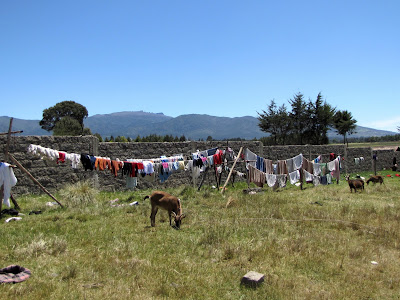 Rows of wash hung on the lines nearby...while goats threatened to make way with their favorite items. 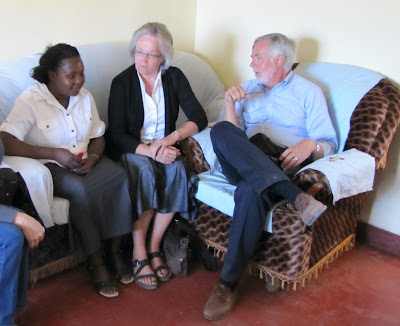 We met Lucy, the director of the children's home...pictured here with Martha and Ron.  Lucy took in her first street child some 11 years ago...and now provides a home and education for several hundred.  There were new borns arriving shortly, and preparations were underway for their arrival. 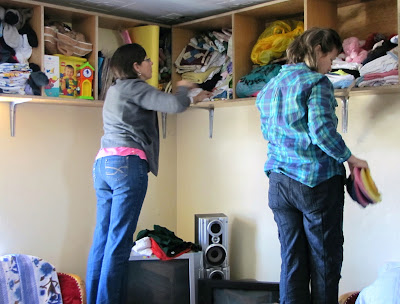 We met two gals who had arrived from Canada the previous night, and were busy sorting children's clothing.  Introductions were made...and I soon realized that one was a good friend of my sister's.  Though we had never met previously, I had heard of her often.  Who would I have thought I would happen to meet someone halfway across the world that I 'almost knew'?  She fell in love with the African children a few years ago, and now travels to Kenya several times each year to help out at the orphanage. 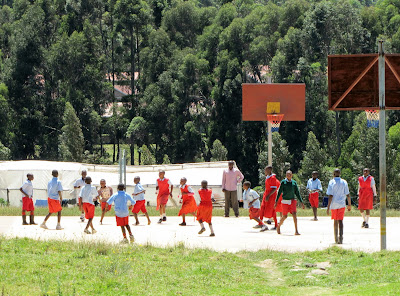 The older students were enjoying a little pick-up basketball on their lunch break. 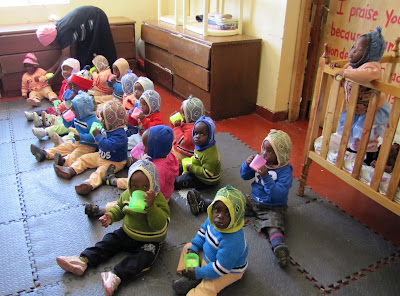 And in the toddler room...we helped feed the munchkins their snack.  They were somewhat terrified of our white faces at first...but the food won them over!

It may seem a little odd for them to be wearing hats indoors...but the area where the orphanage is located is at quite a high altitude, and can be rather cool.  So it seems the hat are just part of the toddler uniform...indoors or out. 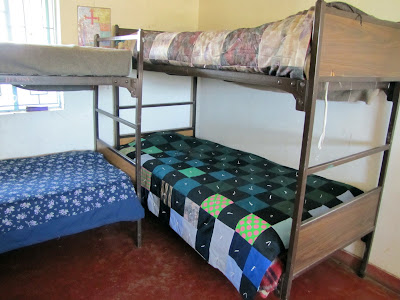 We strolled through the dorms...tidy and spartan.  Each student has their own bunk...and a small box under the bed which holds ALL their worldly possessions.  It's hard to identify with living like that! 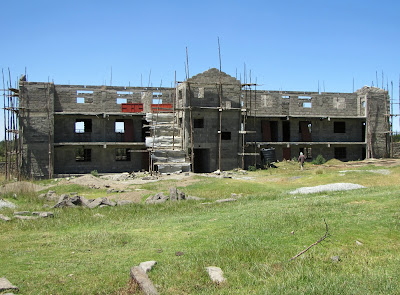 Thanks to the generosity of a businessman from Canada...a new school building is under construction.  It won't be fancy...but it will be so welcome! 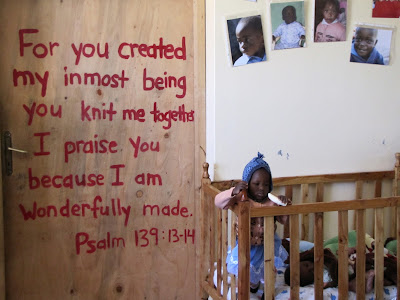 And so we saw the many ways that MCC impacts the lives of children and adults in Kenya.  Like I said...they do a good work over there.

Email ThisBlogThis!Share to TwitterShare to FacebookShare to Pinterest
Labels: Africa