Maine...almost in Canada.  It is bordered by Quebec and New Brunswick.  It is the most northerly and easterly state...and is larger than the other five New England states combined.  We did just a 'sampling' of all that Maine has to offer!

As I mentioned previously...we had a welcoming committee when we arrived in Maine.  They were most hospitable...told us a little of what to see and do in their state...and then escorted us to the highway for our trek to Bar Harbor.  Thanks, Vee and John!  Every state should have such good ambassadors. 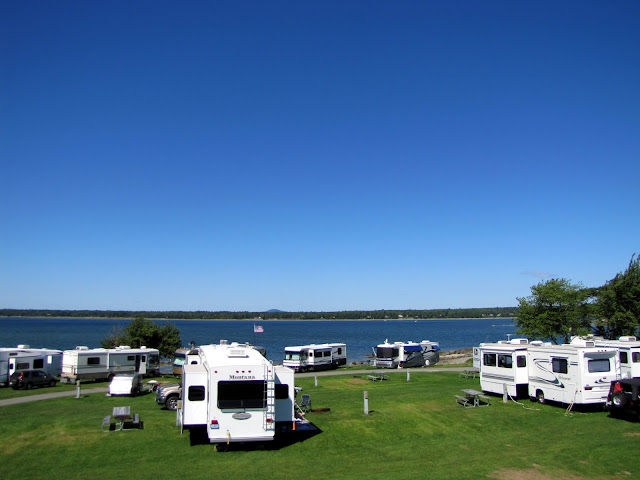 We checked into the KOA at Bar Harbour...where we had a lovely ocean view.  Let me do a quick ad for Kampgrounds of America.  They have campsites in almost every state and we have always found them clean and accommodating.  We travel with our KOA directory...and usually land up at one of their campsites.  We rarely make reservations. 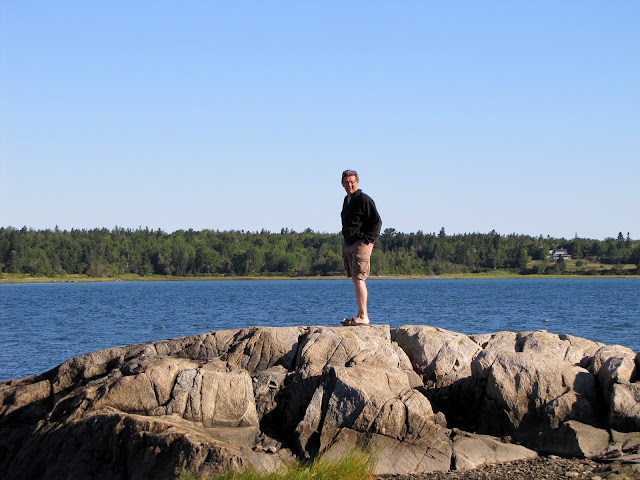 Some walked their dogs along the shoreline in the morning.  We walked each other. :)  By the way...I thought this photo of hubby on a pedestal was appropriate for today.  He's celebrating a birthday.   For many decades we have been singing the song.. 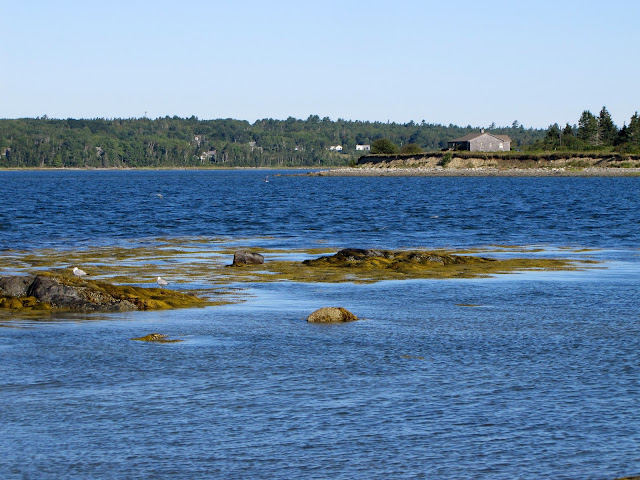 We had our bikes with us...and somehow thought if we were staying at Bar Harbour KOA...we could ride our bikes into town.  In the end we realized it was quite a distance...and caught the shuttle bus for an hour long ride into town.

From the visitor's center...we rode a shuttle bus into Acadia National Park.  It is a 49,000 acre park on Mount Dessert Island...a paradise for hikers, bikers and sight-seers.  We did the 27-mile scenic Loop Road...another hop-on/hop-off  excursion. 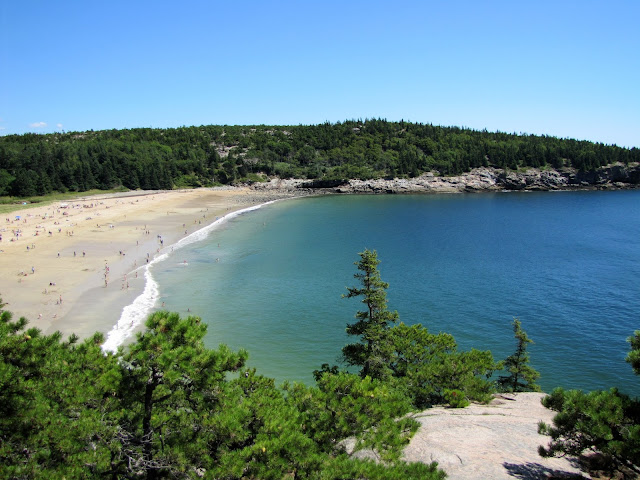 We hopped off at Sand Beach...nestled in a small inlet along the coast.  We heard one had to be really brave to swim there...since the water temperature rarely reaches 55°F. 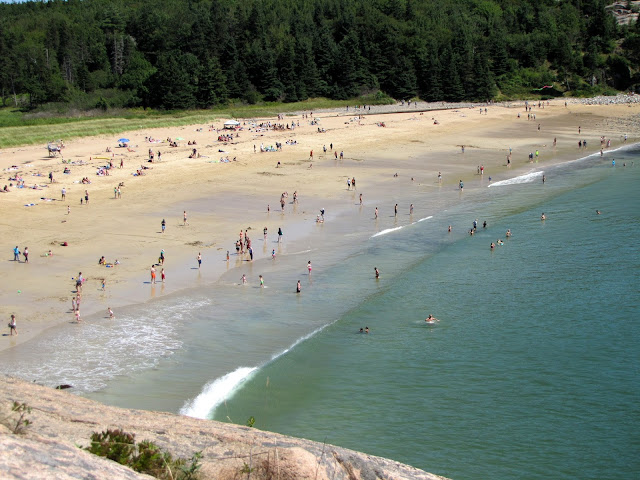 There were a lot of brave souls there that day! 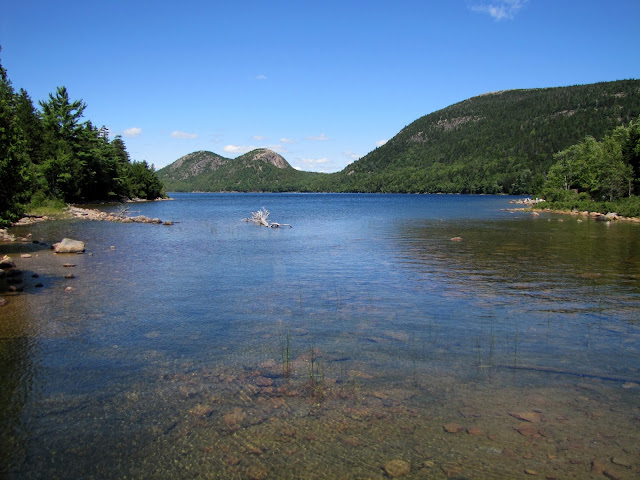 Jordan Pond...with its crystal clear water...was another one of our stops within the park.  The pond was formed by an ice-sheet once upon a time...and is flanked on several sides by mountains.  The two 'bumps' pictured above are mountains known as 'the Bubbles'.

Jordan Pond is also the name of my cousin's son (is that a cousin once-removed?)...and so I took a picture of the sign for his sake. 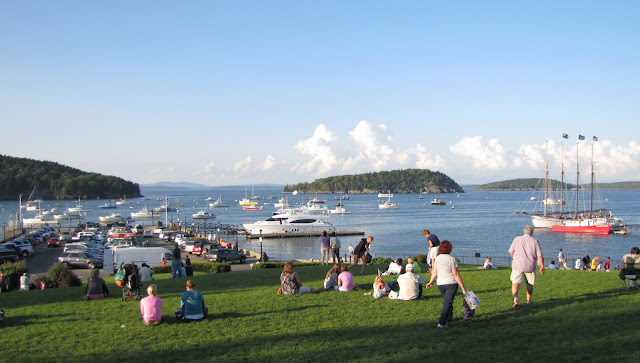 We spent the evening in Bar Harbour...and decided that we really should have lobster. 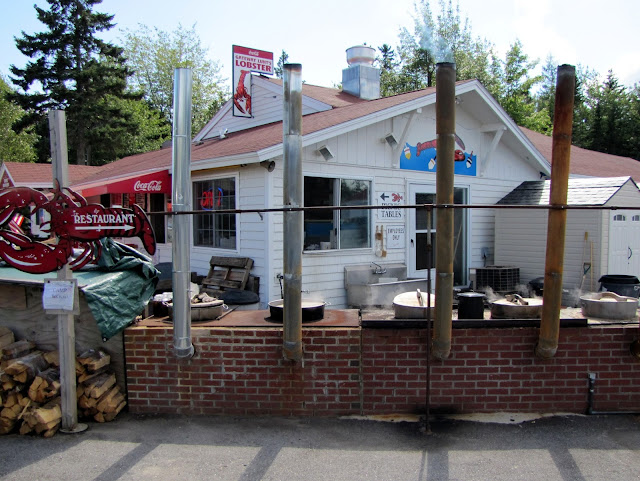 We saw restaurants everywhere with pots of steaming water outside...ready to cook fresh lobster for anyone passing by.  We opted for a restaurant at the dock... 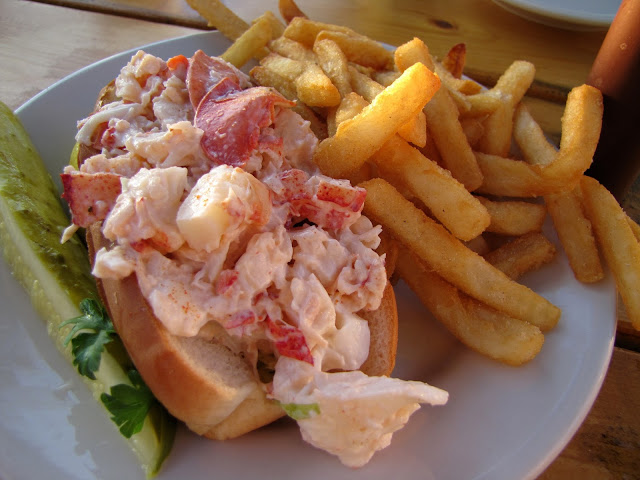 ...where I had a lobster roll.  Pondside said I should be sure to have one while in Maine...and think of her when I did!  I had no idea what a lobster roll was.  Now I know.  So good! 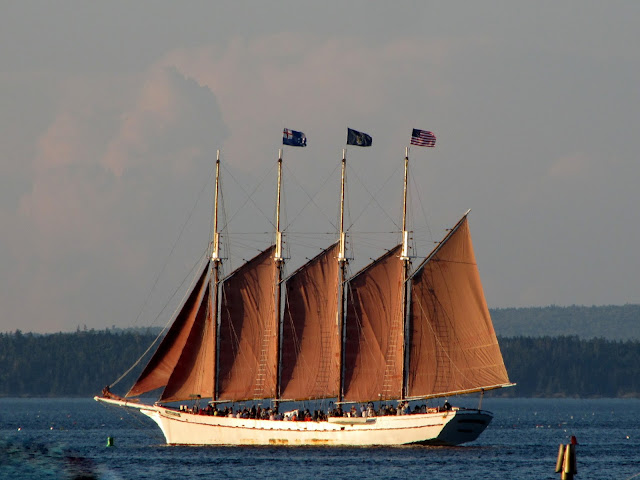 While we enjoyed lobster on the dock...others were cruising the harbour as the sun set. 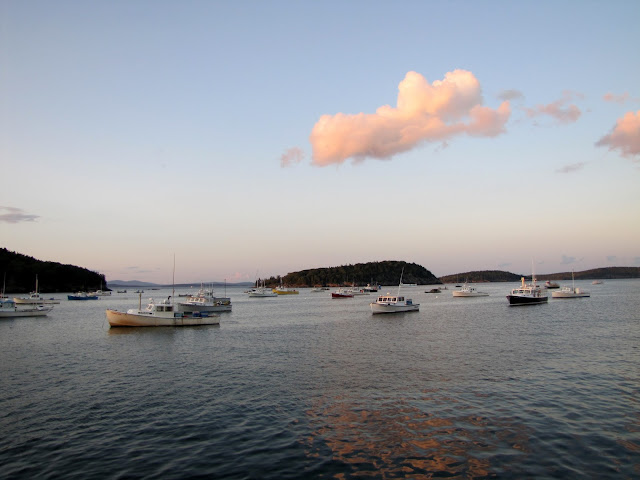 It was a peaceful place to be!  A few blocks away it wasn't quite so quiet...where throngs of tourists milled through the shops.

The next morning we carried on down the coast. 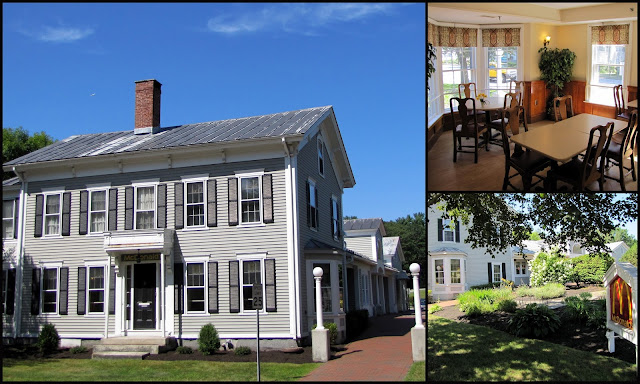 Freeport, Maine.  I had never heard of the town...but was told by a friend that we had to stop by there.  We are glad we did.  Our first stop was this McDonald's...for coffee and wi-fi.  It was totally un-like any McD's I had ever been to.  In keeping with he heritage look of the entire town...McDonald's is in an old house.  There are no large golden arches...just a wee sign at the road. Customers enjoy their meals in the original rooms of the old house.  Lovely!

Freeport is best known for great shopping.  The world famous LL Bean flagship store is located in the centre of town...along with several LL Bean outlet stores. The entire town is like an outlet mall...but all the shops are in heritage buildings.  Quite lovely!  I shopped a bit...he read a bit.  There was free RV parking right downtown.

Maine is known as the lighthouse state for good reason.   One hundred years ago...at least 70 lighthouses guarded the coastline of Maine. Sixty-five of those beacons are still standing. There are more coastal lighthouses in Maine than anywhere in the nation.  So we thought we should at least check out a few. 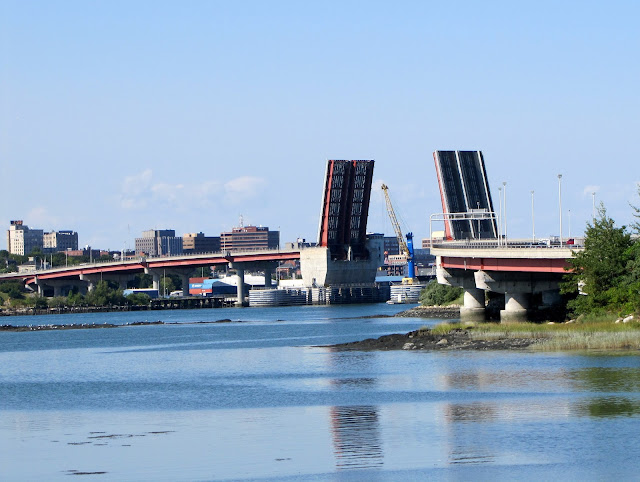 We took the Casco Bay Bridge at Portland...a draw bridge across the river leading to the waterfront. No sooner were we across than we saw the bridge open up behind us...to allow some ships to pass through. 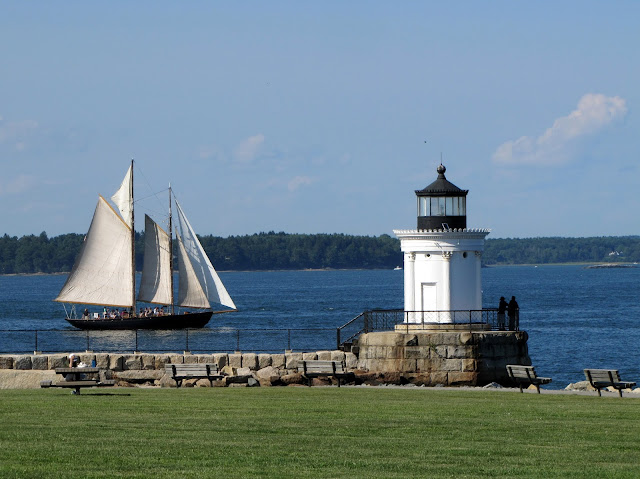 The first lighthouse we checked out was the Portland Breakwater Light...usually called the Bug Light (due to its small size).  It was originally built in 1855...then rebuilt of cast iron in 1875 to resemble a Greek monument with six Corinthian columns. It is on the National Register of Historic Places. In 1942, it was extinguished to protect the harbor during World War II; it was reactivated in 2002. We walked to the lighthouse and chatted with some locals who were fishing there. 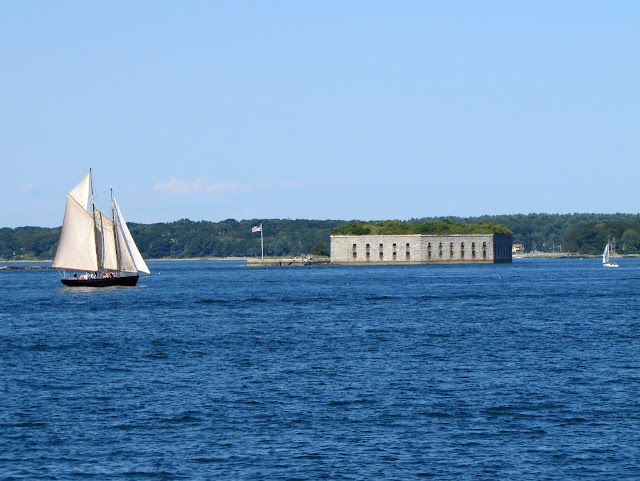 We wondered aloud what the old building in Casco Bay might be.  The fisherman told us it was Fort Gorges...built in the 1800's and last used by the army during World War 2.  It is now owned by the city of Portland and is also on the National Register of Historic Places.  It is open to visitors...though they would need a boat to go visit! 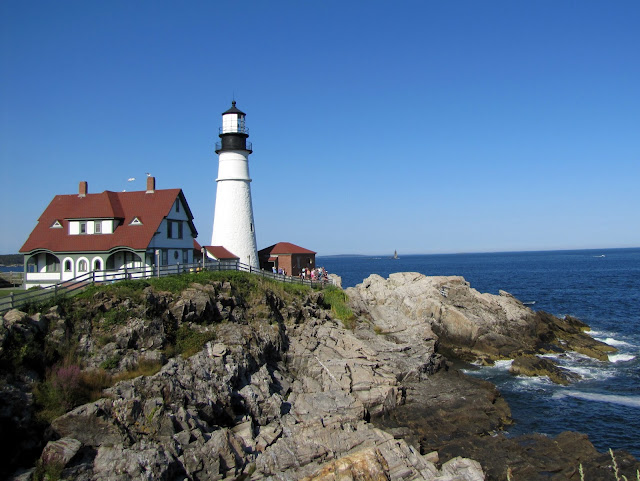 Not far away is the Portland Head Light...in Cape Elizabeth. The lighthouse was built in 1791...it was commissioned by George Washington and was the country’s first lighthouse built under the new government. Whale oil lamps were originally used for illumination. It is apparently Maine’s most famous and photographed lighthouse. It sits at the entrance to Portland Harbor...and has a great view of more than 200 islands from its deck. The keeper’s quarters are now a museum. 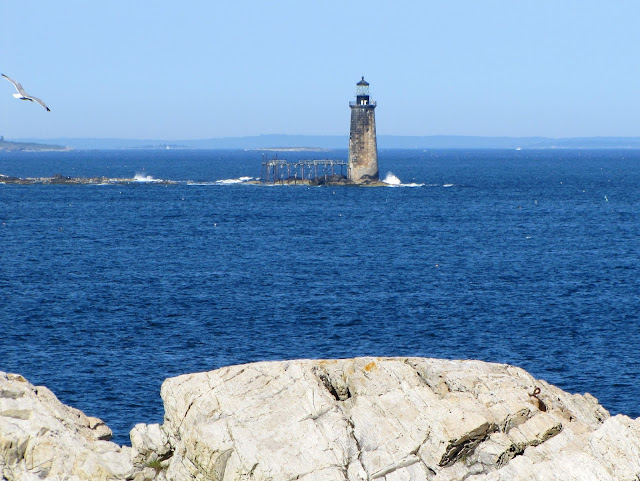 Ram Island Ledge Light was built in 1855 to protect sailors from the dangerous underwater ledges of the island.  It can be seen from Portland Head Light...and is also a National Historic Place. 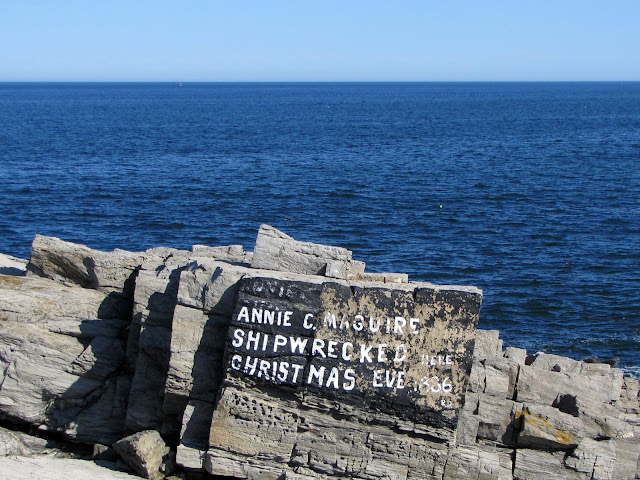 Along the shore near the Portland Head lighthouse we found a rock commemorating a Christmas Eve shipwreck in 1886.  Thankfully the lighthouse keeper and his family were able to rescue the entire crew of the Annie Maguire by using a ladder as a gangplank.  That would have been a most memorable Christmas! 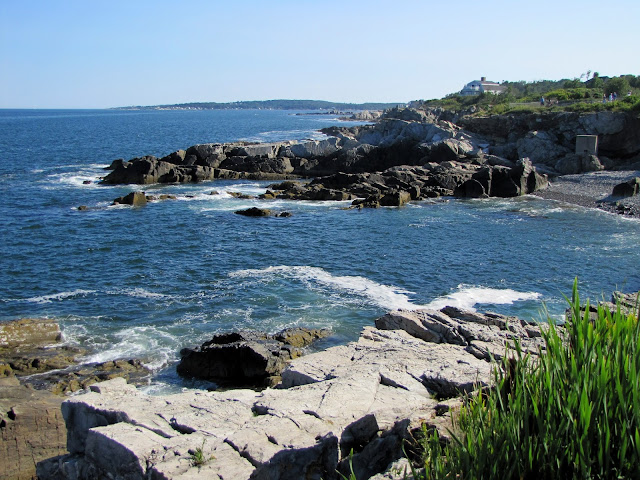 Sun drenched rocks...and waves crashing onto the shore.  We came.  We saw.  We are glad we did. 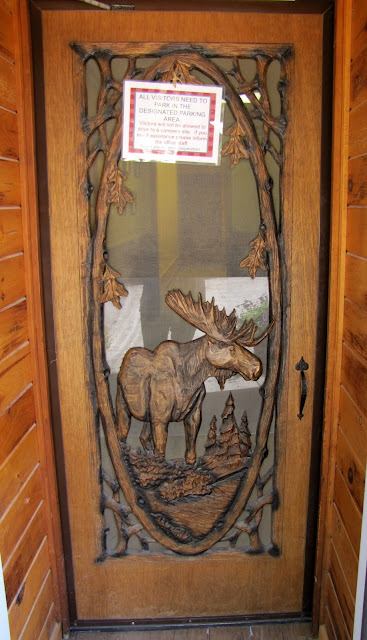 Oh...and before I close the door on Maine...let me leave you with one more image.  Moose watching is apparently a popular thing to do.  Maine has a sizable moose population...and so the chances of spotting a moose are apparently very good.  We saw signs...and souvenirs...and t-shirts...all things moose except the real thing!  My favorite was the moose screen door at the KOA campsite near Freeport.

Next port of call...Newport, Rhode Island.