It's a dreary, drizzly fall day on the west coast, so that called for a pot of soup for supper. I also picked most of my tomatoes this week, so I needed to do something with them. One of our favorite fall soups is a tomato-corn chowder made from a recipe that I snipped out of a paper many years ago. I must be a Mexican Mennonite because I sure do love the dishes with a Mexican flair! And I actually had all the ingredients on hand so I never even had to run to the grocery store. I used fresh herbs, but dried basil and oregano are fine. 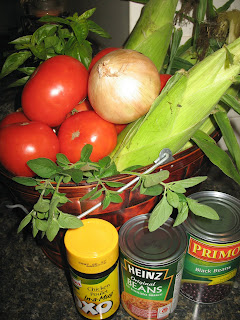 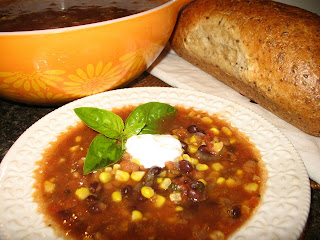 And if you happen to have an 35-year-old orange pyrex bowl to serve it in, it will even look Mexican!
It's dinner time & then we're off to watch our local WHL hockey team play (now it's really starting to sound like winter). I have no idea who they are playing, but I'm going along for the ride. It sounds like they are off to a great start this season.
Posted by Judy at 5:49 PM