The power went out the other night...in the first windstorm of the season.  What's a person to do?  We decided it was as good a time as any to unwrap our new Monopoly game...and play the modern 'all-Canadian' version of the age-old favorite.  We discovered that it took one lantern...one large pillar candle...and two flashlights on demand...to shed enough light on the subject.  How did they do it...back in the day?

Our family tradition was to buy a new board game every Christmas...and for the most part...we have kept it up.  This year we decided to purchase the new Canadian Monopoly game...and because of the storm and all...it got unpacked a little before Christmas! 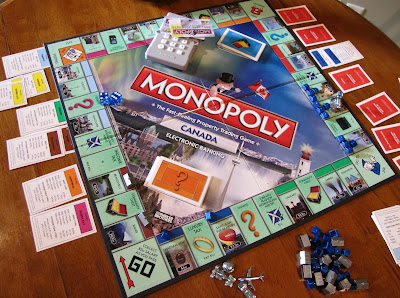 We soon figured out this was not the 'same ole' game we were accustomed to...and we played with one flashlight illuminating the rule book.  Inflation has definitely left a mark on this game!  Where we once 'Passed Go' and collected $200...we now Pass Go and collect $2M.  The most expensive property on the original board was Boardwalk @ $400.  One now needs very deep pockets to play the game...with properties ranging from $600K all the way up to $4M. 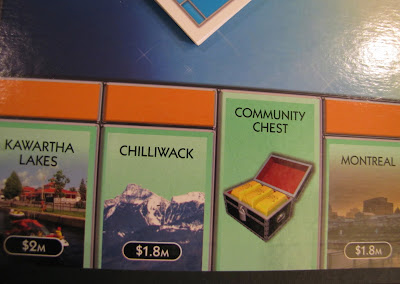 Here's the fun part...we are on the board!  Where you were accustomed to seeing Tennesee Avenue on the orange properties...you will now find Chilliwack....adjacent  to Kawartha Lakes and Montreal.  That's my fair city!  And the mountain peak you see featured on our 'square' is none other than Mt. Cheam...the view I see daily from my front porch.
As you may or may not recall...Hasbro had a contest earlier this year, where we could vote for our favorite city...one that we would like to see on their new Monopoly game.  Oh yes...we are a loyal and patriotic bunch over here...and we like our city just fine.  And since I encouraged you all to join me in voting for my hometown ...I would just like to thank those of you who helped put Chilliwack on the new Monopoly: Canada Edition.  Though you may never have heard of Chilliwack...we managed to get more votes than Vancouver, Ottawa, Toronto and Kelowna.  I like that!
I must admit I was more than a little disappointed when I opened the box to discover there was no money!  What fun would it be to play the game without real, hard cash? 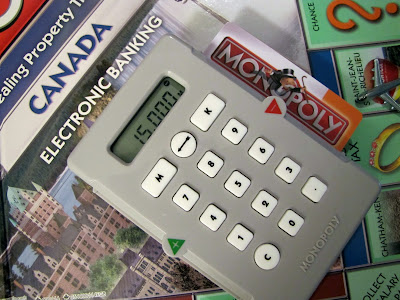 We soon discovered that it was much simpler to swipe a card...a lesson that I had learned long ago in real life.  After about an hour of play in the semi-dark...the game ended with one of us having a balance of zero...and nothing left to mortgage.

What can I say?  If you need a new board game for the season...and you are interested in dabbling in the real estate market...and prefer to spend someone else's money to spending your own...it's a good game for you!  And you may just learn a little about Canada while you play.

Email ThisBlogThis!Share to TwitterShare to FacebookShare to Pinterest
Labels: canada, minutia of life