Snow capped peaks and clear sunny skies...sounds like the perfect kind of day for stringing outdoor lights. And it would have been, were it not for the 30 kilometer winds blowing from the northeast and chilling us to the bone. All week we had planned to do the lights on Friday, but did we want to battle chilly winds? The long range forecast shows mostly rain for next week...so we decided we'd 'just do it'! Two people, three ladders, twenty-some strands of lights, and three or four hours later...it is finished! I had a pot of coffee ready, so we could warm up in between, but there was no time for a break...evening was coming. Yey...it's done and now I can get on with 'decking the halls'.

Our supper was less than gourmet and went down real quick. I had company coming and needed to make a dessert. So what's a warm and comforting dessert on a chilly winter night? It had to be something quick...and preferably warm since I was still chilled through and through. How about bumbleberry crisp? I have lots of bumbleberries in the freezer and usually a bag or two of crumbs for the topping, so it's a quickie dessert.

5-6 cups fruit
1/2 cup sugar mixed with 1 T. flour
(whatever you have on hand...I used apples, raspberries, blueberries and blackberries)

Spray casserole dish with Pam. Mix together your choice of fruits and place in baking dish. (I omitted the sugar/flour last night, since we really don't need the sugar and I like my fruit tart with all that ice-cream!) 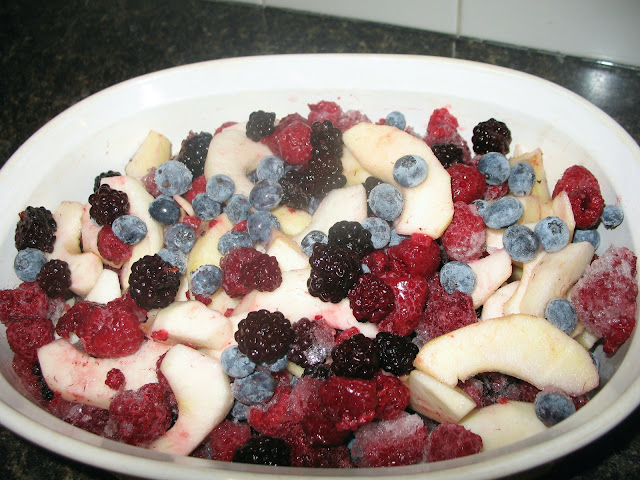 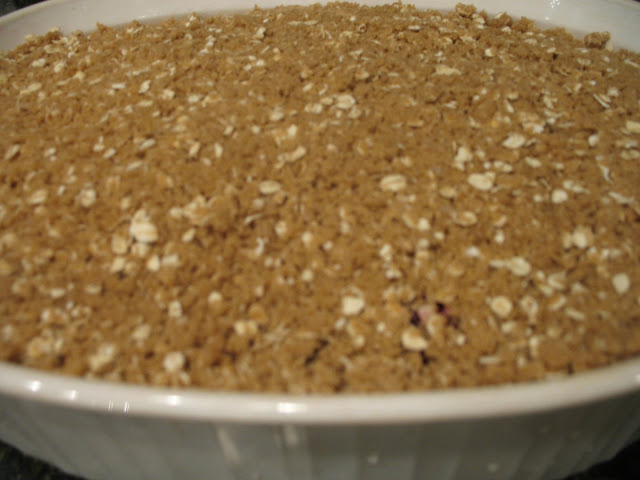 Pop into the 375 degree oven and bake for 45-50 minutes...or until fruit is soft and bubbling. Serve with a scoop of premium vanilla ice-cream. 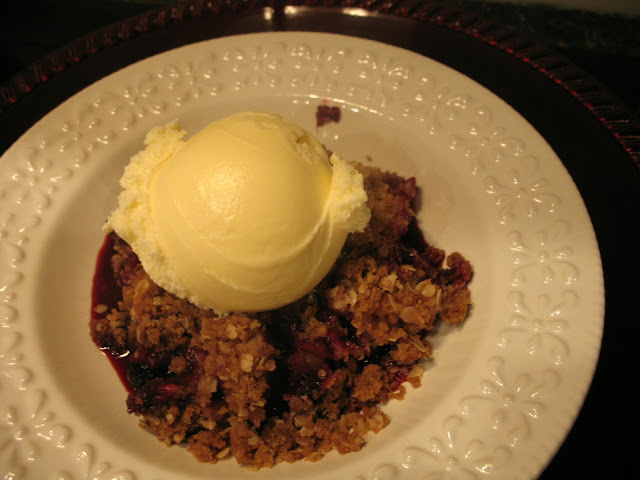 So we had a great time catching up with friends we hadn't seen in ages. They have been to Dawson City, New York, and Germany (and surrounding countries) since we last chatted...and are off to Hawaii next week. After Christmas they are heading south and were wondering what places in Arizona we would recommend...we gave them an earful. Gallivanting around the globe...such fun, but so hard to get caught up when you get back home.
It was midnight by the time they left for home. We put out the lights and headed for bed. Well, we left on the Christmas lights since they were on a timer and would turn themselves off...or so I thought. I woke up at night hearing lovely music...oops, I forgot to turn off the stereo before I turned in. And why were the Christmas lights still lighting up the night at 3 am? I guess a timer only works if it is set correctly.
So I was up bright and early today...and plan to accomplish much. We'll see how the day unfolds.