At this time of the year, we are reminded of traditions that we grew up with. I have to think of all those Christmas sweets and treats that were so dear to my dad...things like halvah, rockavashakies...and Brazil nuts!

I notice halvah is still sold at the deli...I picked up a small piece for old times sake, and have no idea why anyone would find it appealing. It is a sweet and greasy confection made from sesame seeds, and somewhat gritty in texture. My parents purchased it in five pound tins...which had a picture of a camel on it, as I recall. The tins were used as baking pans once the halvah was gone. Now here's the scary thing...I still have (and use) one of those old halvah tins. It doesn't exactly look 'food safe' anymore, but is a one-of-a-kind, just-the-right-size pan that I can't part with!

Rockavashakies (I have no idea if that is what they were actually called) were a wrapped hard, red candy with a picture of a fish on the wrapper. Where they came from and why they were part of our every Christmas is beyond me, but they were a tradition. I was happy to leave halvah and rockavashakies behind...and for some reason fruitcake had never been baked in my childhood kitchen.

But once I was married, I discovered that fruitcake had to be part of the food of the season...or so my husband thought. Here's the recipe I have used all these years... 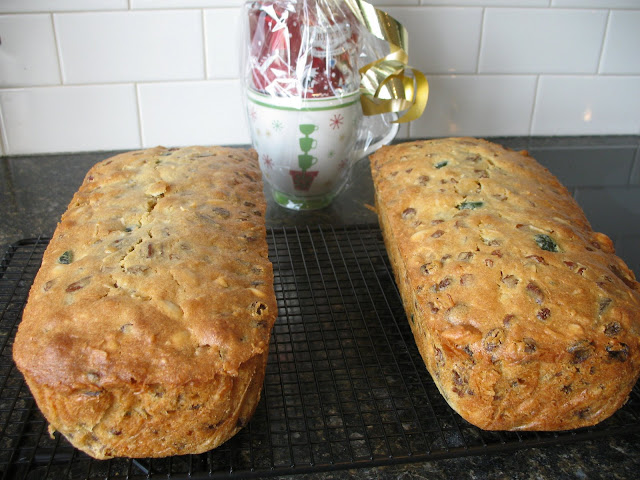 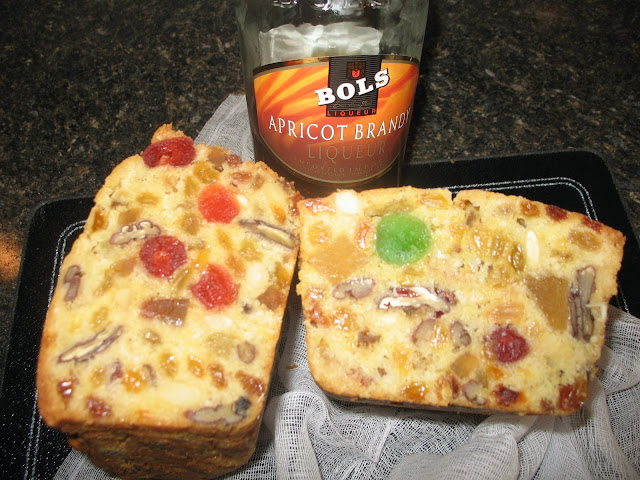 Now here's the part that makes this fruitcake so moist and yummy....wrap in brandy moistened cheesecloth. I wrapped the loaves in several layers of cheesecloth first and poured the brandy over. I used about 1 1/2 cups of apricot brandy for this recipe. Store the wrapped cakes in a cool place.
So if anyone wants to give home baked fruitcake a try, there's a relatively simple recipe.
I must run! I'm having a friend over for lattes, and what she doesn't know is that this barrista has never made a latte. It can't be that hard, can it?