the mystery is solved...

A mystery that began in May of 2005 has been solved. Let me start from the beginning…

Heidi (my daughter) was going through a rough time in the spring of 2005. After a particularly bad week, she took a day off work…decided she would put aside her problems for the day and just have a fun time. She was hosting ‘Splurge’ at her place that night and spent the day getting ready.

Let me just explain about ‘Splurge’. It is a group of twelve ladies that get together once a month. It is like a shopping club, where each of them put in $20 a month, and one gal is the lucky winner of a $240 shopping spree. They get to buy whatever they want…except groceries or bill paying! The one whose name is drawn is also the hostess for the next month’s meeting. She plans some fun event (spa night, movie night, ‘amazing race’, or whatever…) and provides refreshments.

So, on the first Monday of May (two and a half years ago), Heidi hosted a murder-mystery game called ‘The Last Train From Paris’ for her Splurge group. She invited all her friends to come for dinner and cooked the entire meal. I thought I would add to the ‘mystery’ of the evening (and maybe help her forget about her problems) by having some flowers sent to her place. I picked up a large bouquet of roses and had them delivered that night. Since her ‘game’ was set in Paris in the early 1900’s, I attached an antique postcard of a French railway station, on which I had written a note which included the names of characters from the game. I thought they might have a little fun with it, and either they would figure out who had sent the flowers or I would confess. They were totally baffled! Well, the next day I heard all about the fun time they had, and that Eric (from whom they had borrowed the game) had sent them roses. Although Eric was denying it, they knew it was him! I decided to let Eric take the credit, and when it was Heidi’s turn to host her friends in 2006, I would send flowers again along with my confession. As it turned out, we were away when she had her Splurge party last year, so I missed out. When we got home I thought I would just come clean, once and for all. When I asked her how her Splurge party had gone, she told me all about it, including, "And you won’t believe this, but I had flowers sent to me again!” Now it was my turn to be surprised…since I knew I hadn’t sent them. Tim had surprised her this time. It was then I decided I might just as well wait until 2007 to end the mystery. And now the year is almost over, and Heidi finally had her Splurge party on Monday night.

I went out and bought a dozen roses… 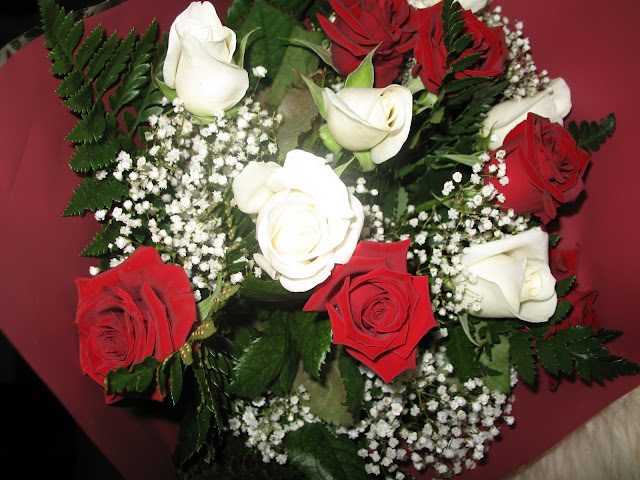 rather Christmassy looking wouldn’t you say?

I had them delivered to her place in the evening…along with a note taking full responsibility for throwing a ‘curve ball’ into their mystery night. And so ends the unsolved mystery of two and a half years ago!

No more roses for your Splurge parties, Heidi (unless Eric or Tim send them!)